Ljubljana and onto Tolmin 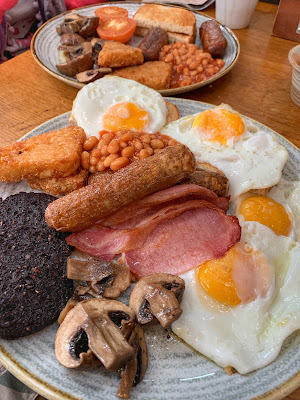 Seven weeks had passed since returning from Japan, a trip which in a strange kind of way seemed like it was a dream and didn't really happen. Thankfully it wasn't a dream though and you can read the Japanese Adventure here if you haven't already. Anyway, it was time for my wife and I to head to Stansted and catch a flight to Ljubljana.  August had arrived and Punk Rock Holiday festival would be starting in Tolmin in a few days time. The journey to Ljubljana involved a slightly delayed Easyjet flight and a Full English at Wetherspoons. I don't recall ever flying from Stansted and not having a Full English! Why Wetherspoons and why four eggs you may be wondering? Wetherspoons is the only place at Stansted that offers a breakfast with includes toast and I swapped my tomatoes for my wife's eggs as she's vegan. 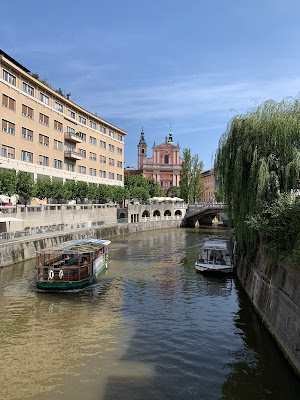 Having circled Ljubljana airport four times waiting for a thunder storm to pass we finally landed and caught a bus from the airport to the city. The bus driver like all bus drivers we've encountered in Slovenia was a right miserable git, shouting and snapping at passengers boarding the bus for no apparent reason. To be fair though the majority of Norwich First bus drivers are pretty miserable most the time too. We were spending the night at a place called Lina Rooms, not far from the station. £41 bought us a double room with a shared bathroom, I think we were staying in an annex built on to someones house, it was perfectly acceptable though. Just before arriving at the hotel the wheel on my case collapsed which was a tad annoying, luckily it was still possible to glide it using the remaining three wheels though. I made a mental note to never buy a case with four tiny wheels on again (two large wheels are best) and we made our way into the city centre. 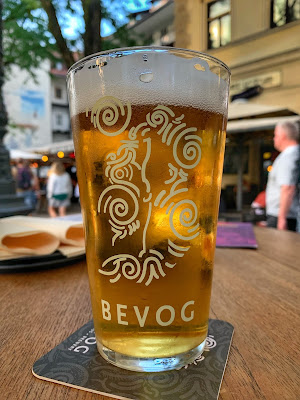 Finally it was time to relax! Fetiche Bar located on the banks of the Ljubljanica river seemed like the perfect spot to enjoy a beer and a bite to eat. This Bevog beer is local and the name was really familiar, it's a really nice IPA lager. It wasn't until I arrived at the festival in a few days time when I remembered that Bevog make a special beer just for Punk Rock Holiday. 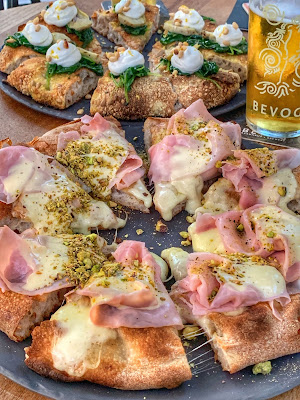 The speciality at Fetiche Bar seemed to be sourdough pizza and damn it was good! My wife ordered the vegan pizza with corn dough base, it was topped with sunflower seeds, spinach, cashew nut cheese, pine nuts, lemon peel and olive oil. I dithered over the pizza menu for ages but finally settled on the ham and cheese. The light sourdough base was incredible, generously topped with  Fior de latte, ham, Hollandaise sauce and pistachios. After this we wandered along the banks of the Ljubljanica slowly making our way back to towards the hotel. 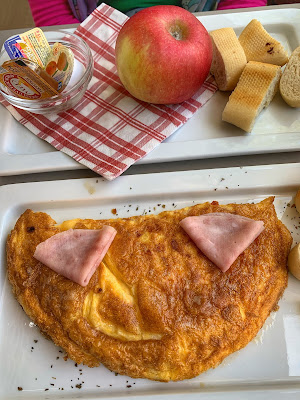 We checked out of the hotel and made our way towards the train station. No, we weren't leaving Ljubljana just yet, we were storing our cases in lockers for the day. I couldn't bear the thought of wheeling my damaged case any further than I needed to for the entire trip. We then headed back to the banks of the river for a spot of breakfast. As my wife chowed down on some bread and jams I feasted on a ham and cheese omelette. 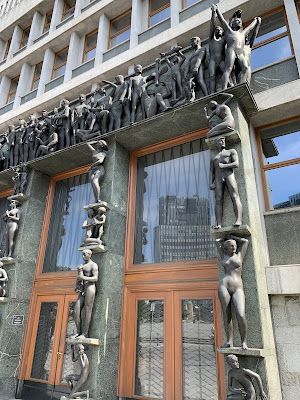 Having been in Ljubljana just last year we wanted explore new areas so made our way towards Tivoli Park in the west of the city. On route we passed the Parliament building with it's impressive sculptures surrounding the main entrance. 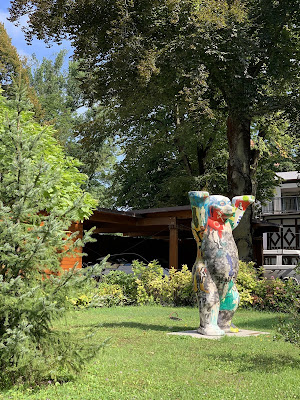 Further along the street we spotted this chap in someones garden! 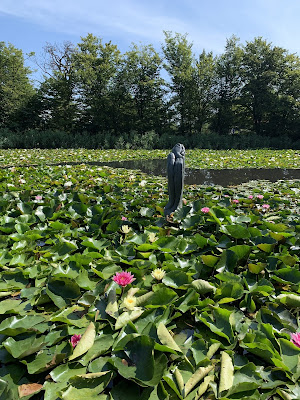 Tivoli Park is home to Tivoli Mansion which houses a museum featuring an international collection of modern graphic art. We decided not to go inside though and instead explored the park which was huge! This giant pond is filled with fish and covered in waterlilies. In the centre sits the monument of fish "Ribe". 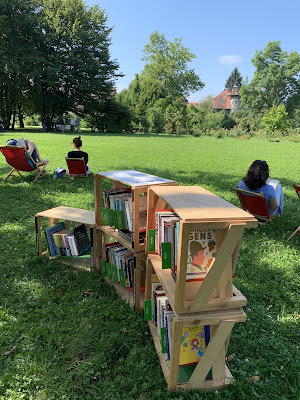 Just beside the pond is a summertime open air library with deckchairs to relax in with a book. Such a lovely idea and clearly very popular! 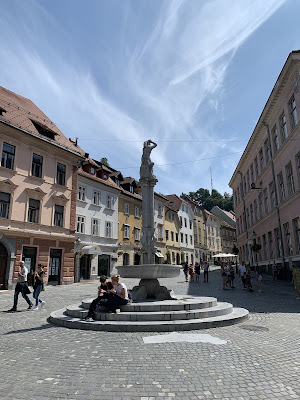 Back in the centre of the city I remembered something I'd eaten here last time and if my memory served me well it wasn't too far from here.

Found it! Klobasarna specialises in the Carniolian sausage and I'd been waiting patiently for a year to try one of these again. 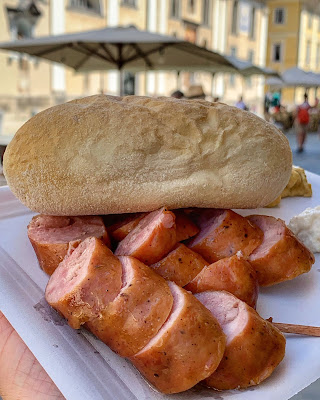 Just €3.50 buys half a Carniolian sausage, a bread roll, mustard and horseradish. The sausage is served hot and is so juicy, love the taste of these! 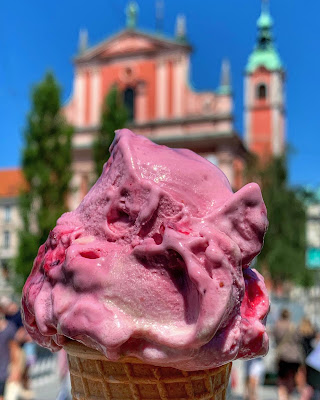 Straight after the sausage I cooled down with a raspberry and white chocolate ice cream. When it comes to food photography my biggest concern is lack of natural light, closely followed by the panic of photographing ice creams on extremely hot days! 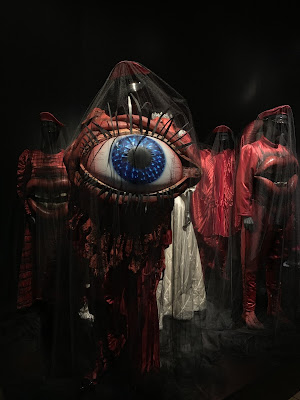 With some time to spare in this magnificent city we decided to visit the exhibition "Parallel Worlds" of Alan Hranitelj. It was being exhibited in Ljubljana Castle which towers above the city on a hill, it can be reached on foot up some historic pathways or by funicular if you can't be arsed to walk. The first part of the exhibition presents a selection of Hranitelj’s costumes for theatre, opera and ballet, created between 2006 and 2019. 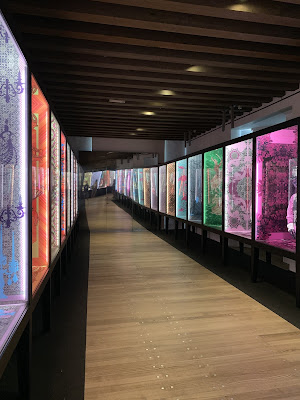 This part of the exhibition is a peek into the Mad Hatter’s Wardrobe, a glimpse of the infinitely colourful world of dressing. There was so much to look at in here! 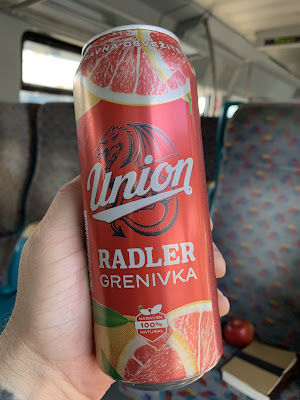 With our suitcases back in tow we boarded a train bound for Jesenice, from there we'd catch another train to Most Na Soci. I sat back and enjoyed an ice cold Union Radler, a bit like a shandy but in fruit flavours. As luck would have it we managed to grab a lift from a festival food vendor at Most Na Soci train station who kindly dropped us off in Tolmin, home of Punk Rock Holiday festival. 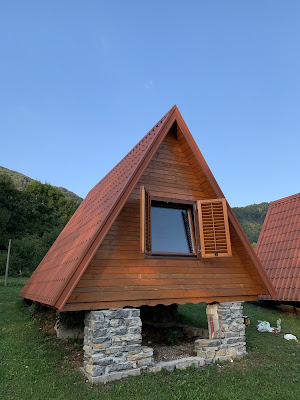 Wheeling my wounded suitcase over a mile from the festival site to Kamp Siber where we were staying in the sweltering heat was definitely one of the low points of the trip. Covered in sweat and in need of a beer the low point rapidly turned into happiness as we were caught a first glimpse of our home for the next six nights. 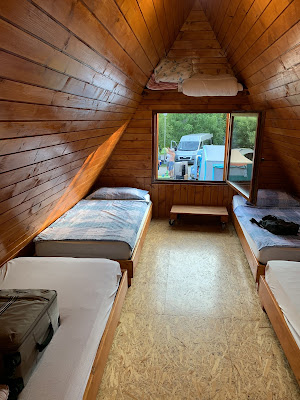 The cost of the festival ticket does include camping on site. I didn't fancy sleeping in a tent though and it was too far to drive my campervan, so another solution was needed and this wooden tent was the answer. This camp site was just a 20 minute walk away from the festival site and staying here meant we had electricity inside the wooden tent and proper showers nearby, perfect! The cost of staying in one of these was just €22 per night. 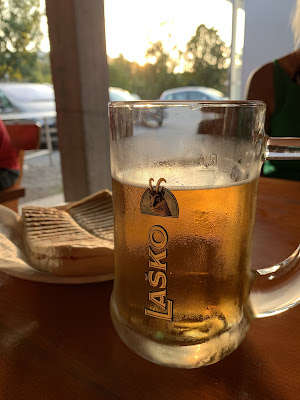 There was also a bar on site serving ice cold beer and snacks at very reasonable prices. We spent the evening here enjoying pizza, paninis and a few beers.