If you want to catch up on previous Japanese Adventures here's the links. 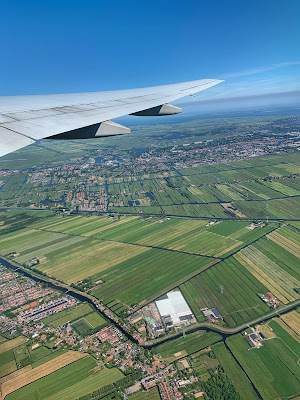 Having saved up money every week for 18 months since our last trip to Japan the day had finally arrived to return again.  We decided to fly from Norwich with KLM via Amsterdam to Osaka, flights cost £637 per person. I always find transferring flights a bit stressful in case there's a delay but on the day everything was on time and went perfectly according to plan. The flight from Amsterdam to Osaka took about eleven and a half hours. My wife spent the best part of this time watching films whilst I finished Angry Birds and watched the progress of the flight on the screen. We were determined to get some sleep on the flight and even bought some of those inflatable neck pillows from Tiger to help with this. Apart from dozing off for a few brief moments though we arrived in Osaka at 9.30am feeling pretty damn tired! 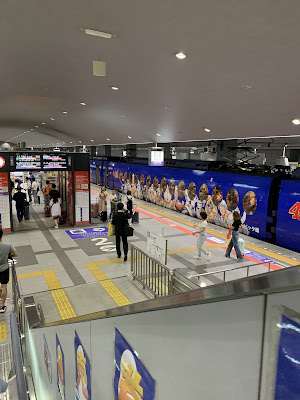 On our previous trips we'd always flown into Tokyo but Osaka was close to The Seto Inland Sea where much of our trip would take place so it seemed like the perfect choice. We jumped on the Kansai Airport rapid train costing 960 yen and in just over an hour we were at Osaka station. It was on the train when a wave of tiredness hit us, we would have to wait another 6 hours until we could check into our hotel though. 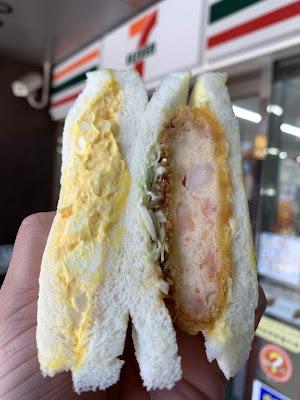 As we left Osaka station the fresh air made us feel slightly more awake again and I had an uncontrollable urge to eat an egg sandwich from 7-Eleven. If you've eaten a Japanese egg sandwich before you'll definitely understand why! The softest white bread with the crusts cut off filled with the most creamiest egg, such a pleasure to eat. The other sandwich contained a shrimp cutlet, thoroughly enjoyable too! 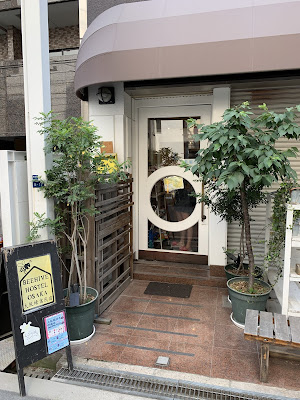 Finding our guesthouse was made easy using Maps.me, a very handy map app that lets you view maps offline anywhere in the world. Simply download the cities you'll be visiting before the trip and view them in detail when you arrive. We were staying at Beehive Hostel  for 2 nights, a double room her cost £40 per night. In Japan it's highly unlikely you'll be able to check in early unless previously arranged. You can however leave your luggage securely until check in time which is what we did next. 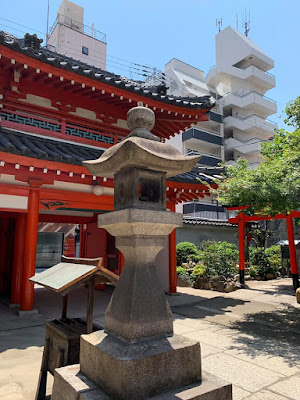 The sun was beating down as the temperatures steadily kept rising. Free of our luggage we made our way towards the Dontonbori food district pausing to admire some temples on the way. I loved the contrast of traditional and modern architecture so close together in this vast city. 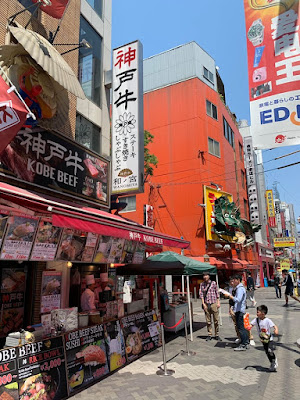 I'd been really excited about visiting Dontonbori but strolling along it having not slept for 30 hours made it really difficult to appreciate. With this in mind we decided to head somewhere far more peaceful and relaxing. 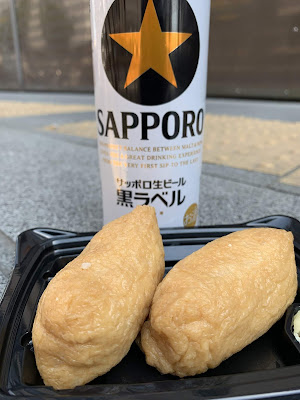 Drinking beer on no sleep probably wasn't the wisest plan in hindsight but an ice cold Sapporo and some inari sushi on the banks of the Dontonbori was just the tonic we needed! 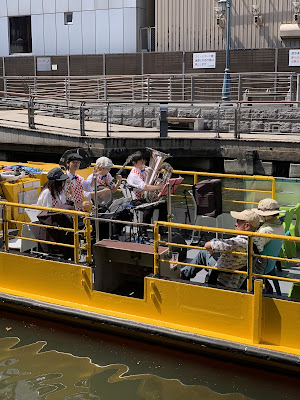 Occasionally a boat full of tourists would pass by on the canal, this one entertained the passengers with a brass band. 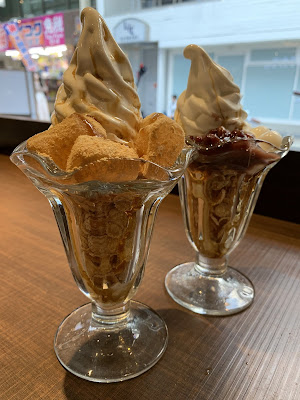 With a few hours to kill before checking into the hotel we stopped for an ice cream. The ice cream was really creamy and you could choose your toppings. We were curious about what lurked beneath the ice cream, as we dug down deep we discovered it was simply corn flakes. Actually quite a tasty combination and the mochi cubes on top were delicious. 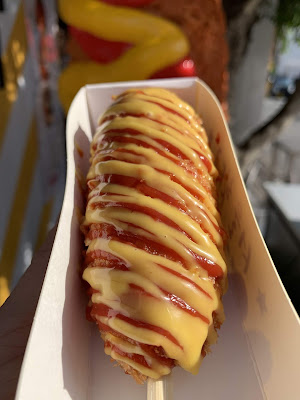 On our way back to the hotel I decided to try a cheese dog, this wasn't your standard cheese dog though. 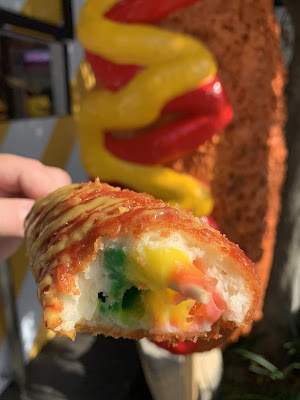 A rainbow cheese dog with a hot dog sausage further down. The coloured cheese was quite sweet tasting and had more visual impact than memorable flavour, quite enjoyable though! 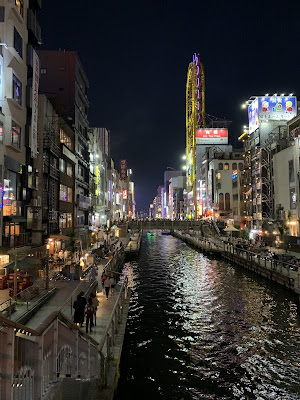 We finally managed to check into our hotel at 4pm and get some much needed sleep. We were very aware of being able to sleep properly later tonight though so set an alarm for 2 hours later. Compared to back home the sun sets much earlier in Japan so by the time we were back on the streets at 7pm it was dark already. 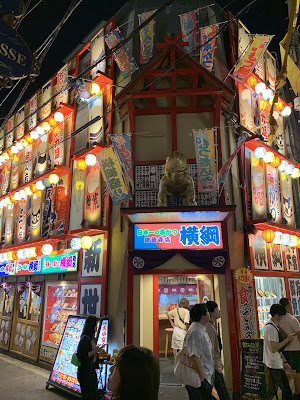 The streets surrounding the Dontonbori district are certainly a feast on the eyeballs after dark. Just walking around them in random directions will ensure you're treated to many bright illuminated sights on every turn. 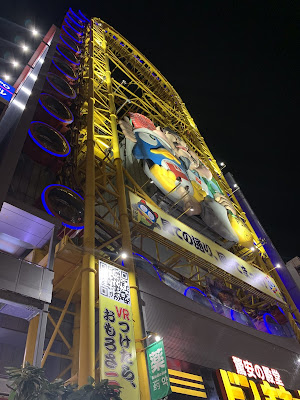 The Dontonburi Ferris wheel had been closed for nine years due to a mechanical fault but in January 2018 it was repaired again. We didn't go on it but did find somewhere to eat nearby on the banks of the Dontonburi Canal. 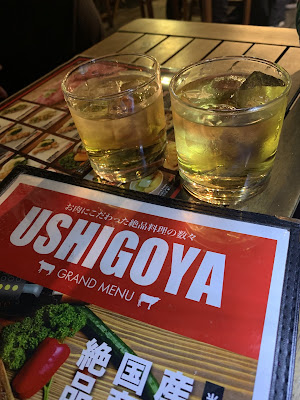 First we ordered some plum wine on the rocks, love this stuff! 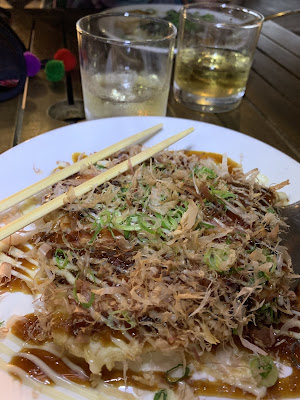 I'd been looking forward to eating Okonomiyaki again and this one tasted great. My wife also managed to order one with no meat or fish. For anyone who hasn't had the pleasure of trying Okonomiyaki it's basically a Japanese savoury pancake said to originate from Osaka containing cabbage, noodles, seafood, meat and vegetables. 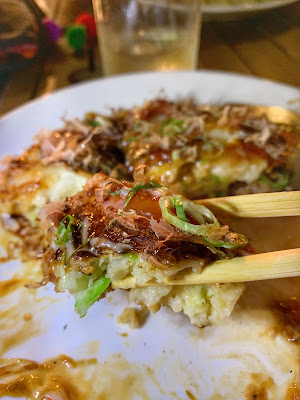 You can usually choose from a variety of fillings and it comes topped with okonomiyaki sauce, mayonnaise and fish flakes. 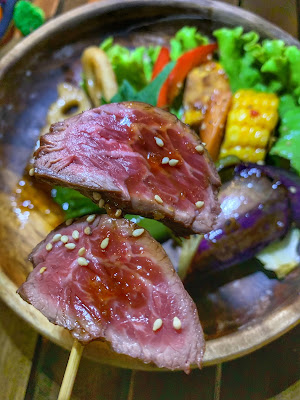 I also ordered some Wagyu beef on a skewer, seriously delicious! 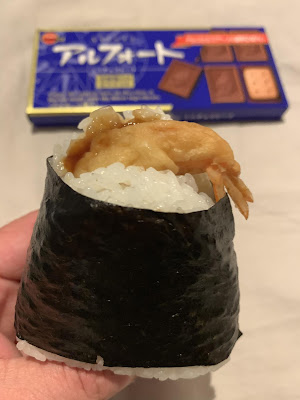 In Japan you're never far from a 7-Eleven, Family Mart or Lawson convenience store. As we'd found on previous trips to Japan, it's always difficult to resist buying a snack from one of these places to eat back at the hotel. I found a tempura shrimp onigiri and Ella picked up some chocolate biscuits. Finally it was time to get a proper nights sleep!