Las Palmas and onto Bahia Feliz

For many years I'd wanted to go away on a Winter sun holiday but had never managed to save any annual leave for the winter months to do so. This did finally happen in 2020 though so I convinced my wife we should go in search of some sunshine in February. With just 10 days available we didn't want to travel too far and eventually we opted for Gran Canaria. Unlike my other previous trips I hadn't planned to write blog posts on this trip, but a matter of weeks after returning something happened to change my mind, the global pandemic of Coronavirus. As I'm writing this nearly everything around me has come to a halt and the world seems like a very different place indeed. With nearly all aircraft grounded, 1000's dying daily and people self isolating and social distancing worldwide I've decided to document this recent trip. Firstly to keep me occupied over this difficult time but mainly to remember a wonderful holiday which was only weeks away from the world changing completely. 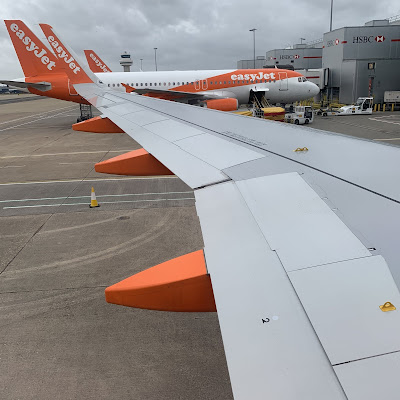 Yesterday we'd spent the day exploring London, much of the day consisted of walking along Southbank and around Central London. Highlights included a fry up, a stack of pancakes and prosecco (at 9am!) at Polo Bar near Liverpool Street and an excellent Vietnamese dinner at Viet Food in Soho. In the evening we made our way to a Travelodge in Croydon, this would make it far easier to reach Gatwick the following morning. As it turned out the Gatwick Express wasn't running so we had to catch a bus, a slight faff but we got there eventually. The Easyjet flight was slightly delayed but we still managed to land at Las Palmas Airport on time. Return flights cost just £85.98 return, an absolute bargain! 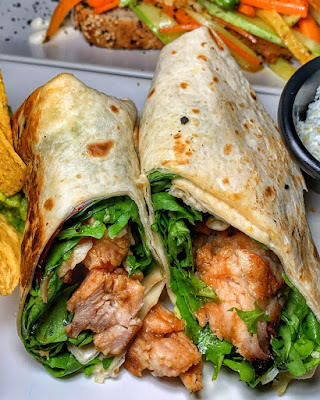 Our hotel in Las Palmas was pretty depressing inside and looked nothing like the photos shown on Booking.com. We made our way along dark corridors and finally reached our room, a dated and tired looking space with deep purple and slightly grimy walls. It was only for one night though so no big deal really and at £23 we certainly weren't expecting the Ritz. It was getting pretty late so we headed out in search of some food. Not many places seemed to be open but we did eventually find somewhere with outside seating away from passing traffic. My wife ordered a roasted vegatable dish and I went for an Iberian elbow burrito, pretty damn tasty! 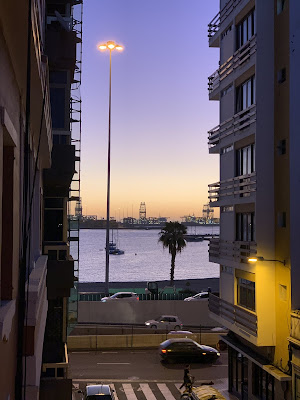 The following morning we woke up as the sun was rising. We didn't want to hang around the hotel longer than we needed to so we packed our cases and made a hasty exit. It has to be said though that the upper floors in the hotel had been refurbished and we'd just lucked out being on the unfurbished floor. Anyway, time to explore Las Palmas and find somewhere to eat breakfast. 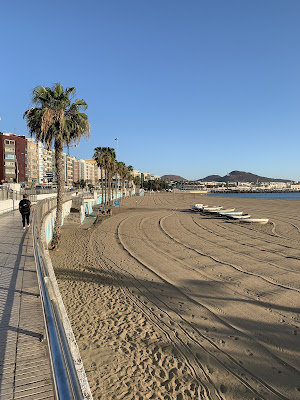 The beaches in Las Palmas looked quite inviting and the morning temperatures were impressive. The question I was continually asking myself before coming here was just how hot does it actually get here in February? The answer to this was a very pleasent surprise indeed as I walked along the promenade in shorts and t-shirt with suitcase in tow. It felt just like a hot summers day back home and it was not even 10am yet. I will point out at this point though that we got particularly lucky as temperatures here for the period we stayed were hotter than usual. 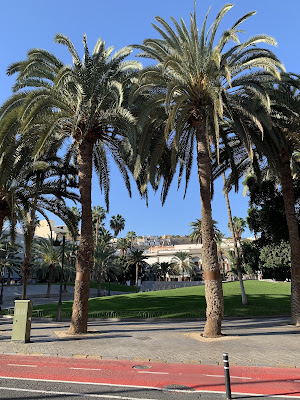 Palm trees were something we were going to see much more of during our time here, as were the clear blue skies. I had wondered how strange it would be adapting from cold weather back home to glorious sunshine overnight. I adapted instantly though and being somewhere so hot didn't seem at all odd like I was expecting. It did make me wonder why I  usually go on holiday when it's summer back in the UK though. Being somewhere this hot in February was definitely something I'd further explore again in the future. 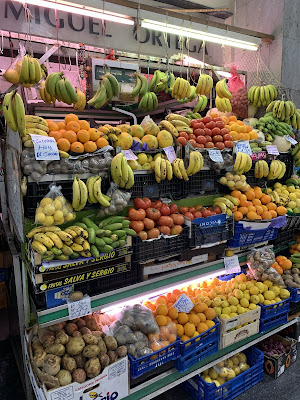 We'd read about a fruit market in the old town called Mercado de Vegueta, we headed there next. The market is packed full of beautifully displayed fruit and has an intimate feel as many locals flock here to do their weekly shop. 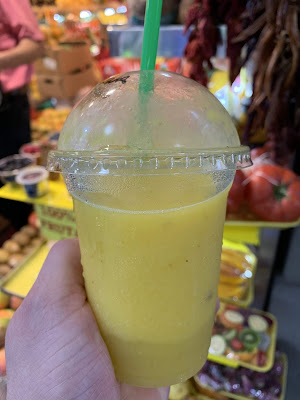 The fruit juice sold here is delicious and available in a vast selection of flavours. I went for banana and mango, well worth just €2. 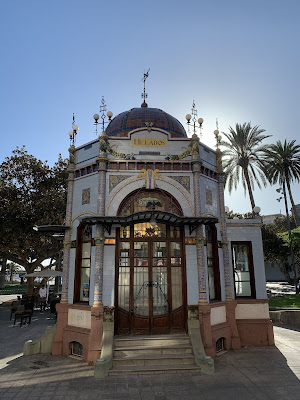 This modernist kiosk built in 1923 can be found in Parque San Telmo. It once sold ice cream but now it's a cafe with outside seating for visitors to the park. 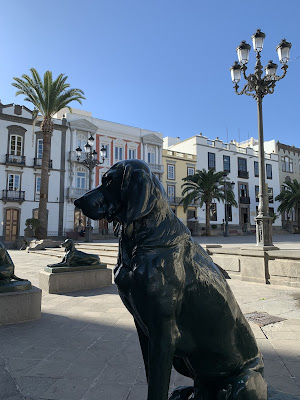 Bronze statues of dogs can be found guarding the square (Plaza de Santa Ana) in front of Santa Ana Cathedral. The cathedral can be found in Vegueta, the old town of Las Palmas. 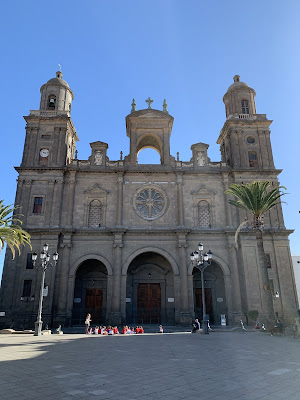 We admired the Cathedral from a distance but didn't go inside. Our minds were firmly fixed on breakfast and we'd be returning to Las Palmas again at the end of the trip. 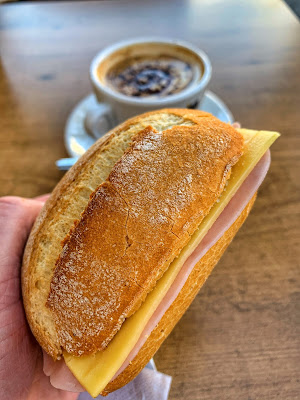 It was in Plaza de Santa Ana where we spotted a breakfast deal in a small cafe. A filled roll, coffee and orange juice for €4.50. A reasonable deal and the palm tree lined square was a beautiful setting to enjoy a spot of breakfast. 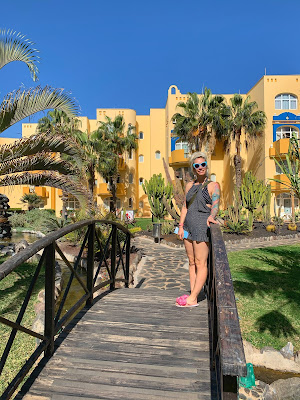 After breakfast we jumped on a bus and arrived at Monte Feliz Hotel in the Bahia Feliz area of the Island. This would be our home for the next three nights and first impressions were good! We'd chosen this area as it was on the South Coast of the island which is said to be the hottest area. This particular spot seemed to be far enough away from the bigger resorts which we were keen to avoid. Surrounding the hotel were beautiful gardens, a swimmimg pool and a private gate which lead towards a path taking you to the beach. 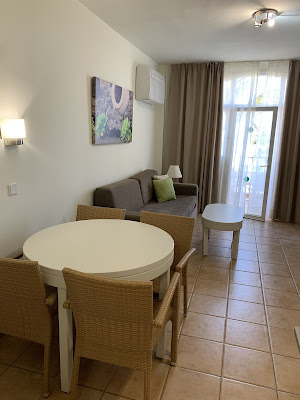 Our apartment was clean, spacious and reasonably priced at €222 for three nights. A balcony offered great views of the sunrise and the price included breakfast too. 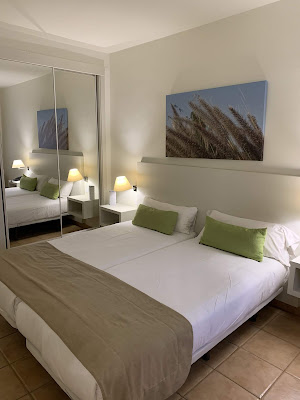 This was a far cry from the hotel we'd stayed in last night, a huge relief! 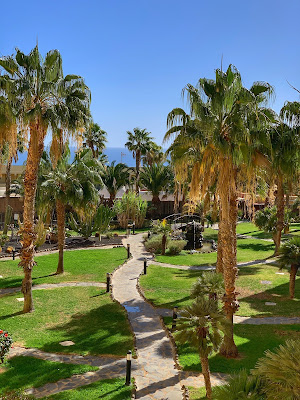 A short walk through the Hotel Gardens led us to the steps down to the beach. 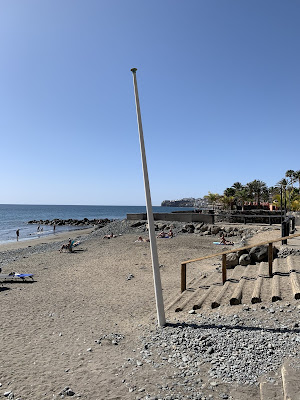 The beach here was just as we'd been hoping for, not overcrowded and quite secluded from the other main resorts on the South coast. 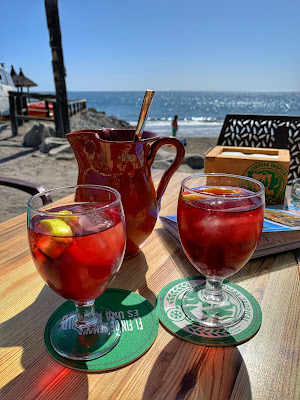 We sat down for a while at a beach bar with some sangria to take it all in. It definitely felt like this escape for some Winter sun had paid off, the location was stunning and the weather was even better than we'd anticipated. 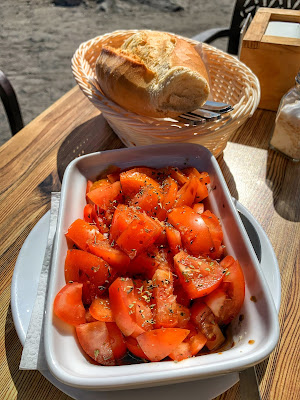 We decided to order some food at the beach bar. My wife is crazy about tomatoes so this tomato salad was her idea of heaven. 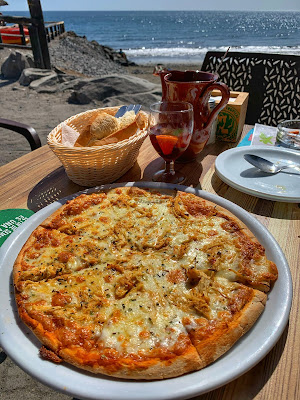 Tomatoes are nice enough but I'm more a pizza kinda person. This wasn't the greatest pizza but it certainly hit the spot. Spicy chicken topping from what I recall and it brought on a craving for a beer. 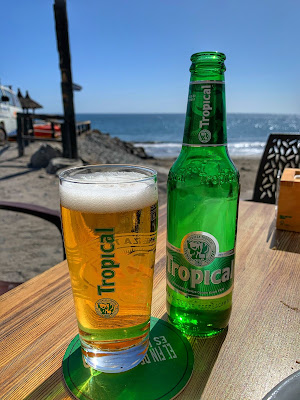 The most popular local beer on the Island is Tropical. It's reasonably priced and was served in a frozen glass which soon defrosted in the heat. So far I'd noticed the prices here were slightly cheaper than back home in the UK. That said though, having previously visited Croatia it was clear your euros don't go as far here. 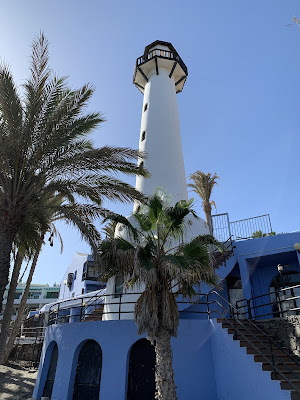 Filled up on pizza, beer and Sangria we walked along the coast towards San Agustin. Much of the journey took us along stunning beaches lined with palm trees and past this lighthouse. It was slightly less picturesque in places though as we passed huge hotels and were forced to walk through residential streets where steep steps briefly took us away from the beach. If you take a walk along this part of the coast be sure to bring a bottle of water as we didn't pass any shops on the way and it's thirsty work in this heat. 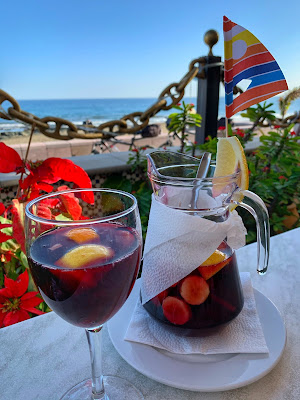 Feeling slightly dehydrated made us really appreciate this bar we eventually found in San Agustin. We sat back with a jug of sangria and took in the beautiful views. The food here looked really promising but we decided to eat back at the hotel later. In hindsight I regret not eating here but you live and learn. 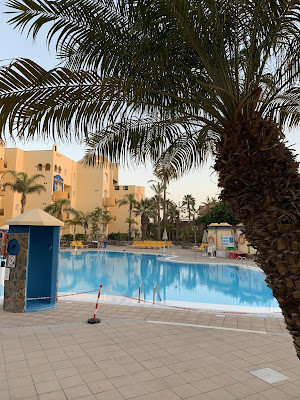 Back at the hotel the pool had closed for the evening but the bar was still open selling a limited menu. I'd spent the past few weeks trying to convince my wife I'd happily eat healthily whilst in Gran Canaria and wasn't going to become obsessed with food. 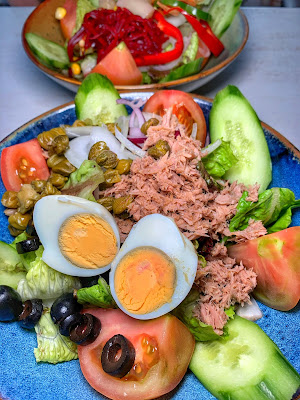 To prove my point I ordered a tuna salad which was pretty bland to be honest. In the back of my mind I was wondering what breakfast would be like in the morning. Would there be proper sausages or those pale grey hot dog sausages often found on breakfast buffets, congealed scrambled eggs or fried? We stopped by the hotel shop for crisps and chocolate to scoff back in the room and decided to call it a day. On the BBC news channel I noticed the Coronavirus situation in China was getting pretty serious and the death toll was at 361. There was also talk of a storm emerging in the North Atlantic called Ciara. Both of these stories caught my attention but as I munched on the last chunk of chocolate my mind soon drifted on what we'd be doing tomorrow. The options were visiting Sioux City or heading along the coast to Mogan.