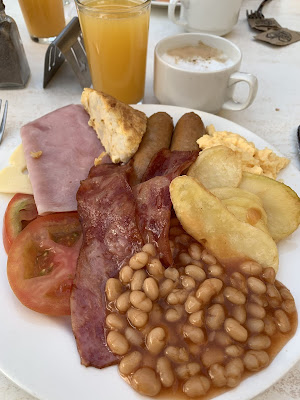 We were up nice and early to check out the breakfast buffet situation. As hotel breakfasts go I was quite impressed and began filling my plate with nearly everything I could see. The highlight was the tortilla and the fact there were beans. I did notice after eating there was also a cooked to order counter offering fried eggs and fried bread. I made a mental note to further explore that tomorrow morning and ate what I had on the plate followed by some croissants and doughnuts. Before leaving we made up some filled rolls and wrapped them in serviettes for later. 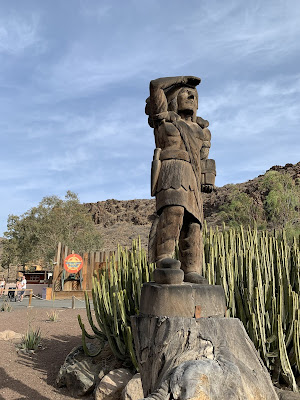 Today we decided to walk to the nearby Sioux City Wild West theme park in San Agustin. It was about 30 minutes walk from our hotel along a long road which eventually took us into a tunnel, this guy greeted us at the other end. 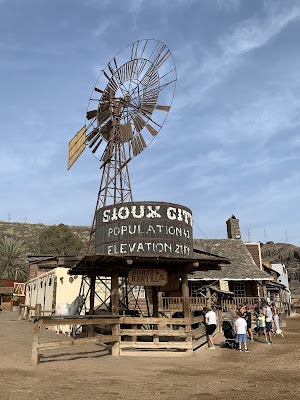 Sioux City was built in 1971 as a film set for Take a Hard Ride and now serves as an authentic Western town to entertain its visitors. I forget how much we paid to get in but remember thinking it was reasonably priced as we left. 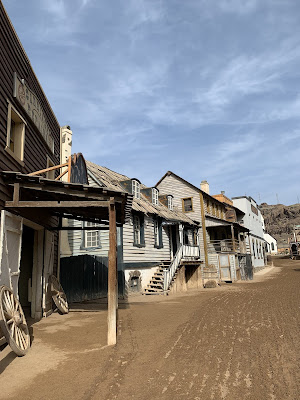 The main street is home to the bank, blacksmiths, general stores, jail house etc. You can go inside nearly all of these buildings but once you've checked them out the novelty soon wears off. We didn't feel the desire to revisit any particular building except the Saloon. 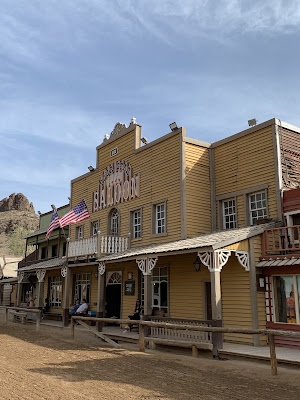 The Saloon is where you can buy a cold beer or a burger and it's also where some of the entertainment takes place, but more on that later. 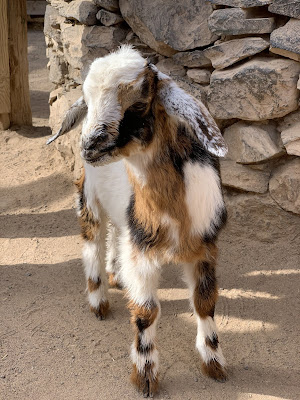 There are plenty of animals to visit including this adorable baby goat. 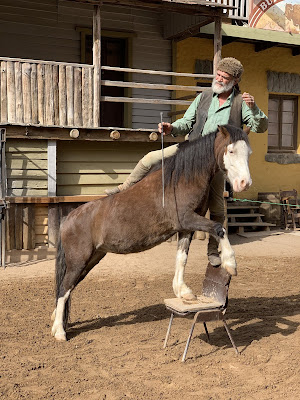 Just as we were starting to feel a bit bored the first show of the day began. A Horse Whisperer show which to be honest made us feel a bit uncomfortable. The horse and the guy with it went through a series of moves which constantly had us wondering how happy the horse was with doing this. 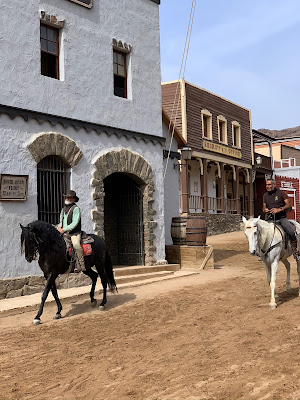 Not long after the horse whisperer show the main show of the day began, a bank robbery. The characters were all really convincing and the town drunk brought some humour to the show. We were pretty much mesmerised by this show for the duration as gun fights and explosions inside the bank kept us entertained. 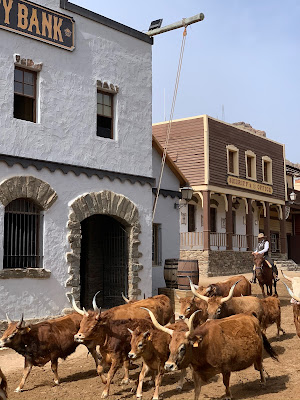 The show also featured cattle running along the main street and ended with a guy falling off a roof as the finale. 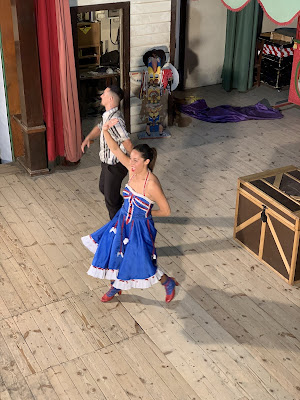 We grabbed a beer and waited for the next show to start inside the Saloon. It started with a magic show and ended up with can can dancing on stage. The audience were asked to participate in places but we lurked safely on the balcony up above the stage. The final show of the day was line dancing, I ensured we made a hasty exit before it commenced! 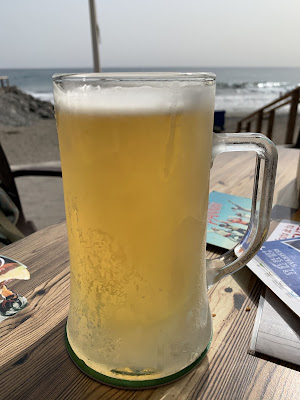 Back at the beach bar near the hotel we relaxed with a beer. 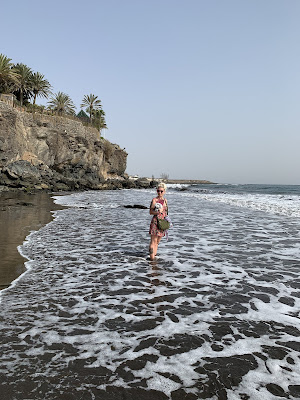 We had a paddle in the sea but I wasn't up for going in for a swim, the water was so cold! 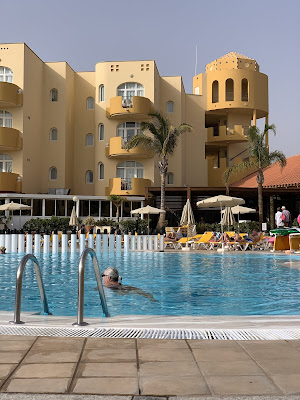 Later in the day we did go for a dip in the hotel pool. It was bloody cold but bearable after a few minutes. 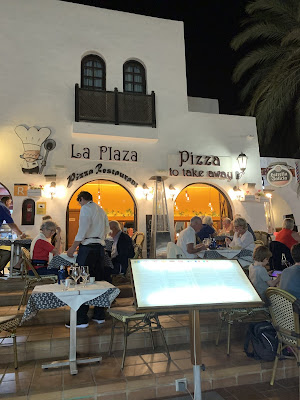 We didn't fancy walking too far to eat this evening so were delighted to find a plaza of restaurants a few minutes walk from the hotel. There were plenty of different restaurants to choose from here but the menus were almost identical at each place. With this in mind it was just a case of choosing the best spot to eat in the plaza. 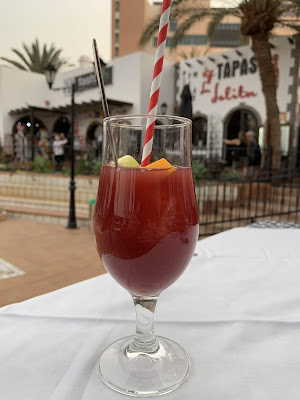 This seemed like a good spot and a sangria was the perfect drink to start with. Our waiter was friendly but had no end of cheesy lines he clearly uses on all the customers. We laughed polietly and checked out the menu. 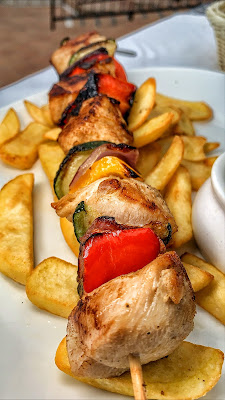 I ordered chicken Souvlaki and chips and my wife ordered a caprese salad. The food here was pretty good but enjoying a few drinks in the plaza wearing shorts and a t shirt in February was what I enjoyed the most. 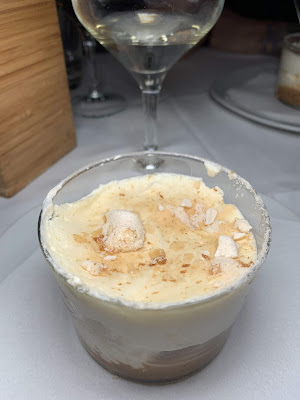 I can't for the life of me remember what this dessert was. I do recall scrapping every last bit of it out with my spoon though so it must have been good. Back at the hotel on the BBC news I noticed that a yellow warning had been issued across the UK for storm Ciara which could cause mayhem for travellers. It made me grateful that we were able to fly out here a few days ago. There was also a report of a Coronavirus outbreak on a cruise ship off the the coast of Yokohama.

I'm probably going to read this blog post myself in the future so just to remind myself how things were today (as I'm writing this on 4th April 2020) here's a reminder. It's been 15 days since bars, cafes and restaurants were ordered to close by the government. Everyone is being urged to stay at home, protect the NHS and saves lives. Supermarkets have social distancing measures in place and thankfully panic buying seems to have settled down. There are 1009625 confirmed cases of Coronavirus worldwide with 51737 confirmed deaths. Each day we watch the government press briefing with a glass of wine and go out for a walk, giving a wide birth to any passers by. Whenever we buy food from the supermarket we now wash all the packaging as soon as we unpack the bags. Yesterday we cancelled the hotels for our trip to Japan in May. On a positive note the sun is shining and we still have our health.