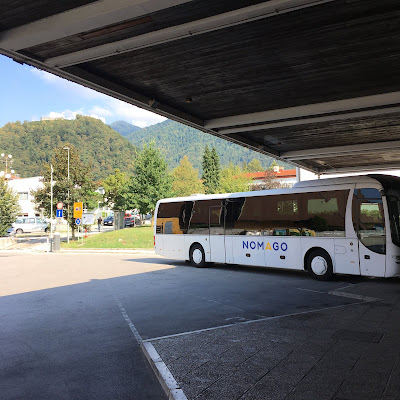 Ljubljana was a bus and train journey away from Tolmin, first we caught the bus from Tolmin on a short journey to Most na Soci. 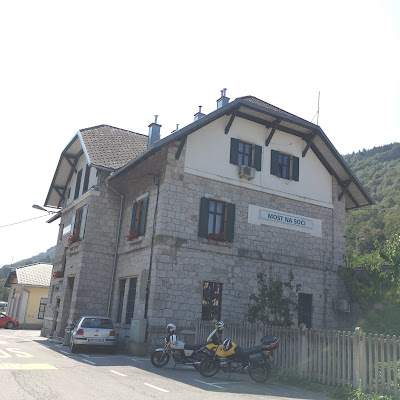 From Most na Soci we would catch a train the rest of the way. We had over an hour until the train was due so we went in search of some breakfast. 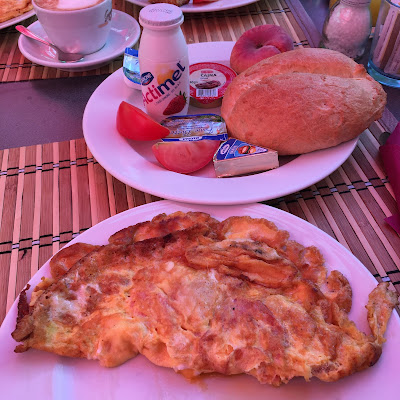 A cafe opposite the station was offering a €6 buffet style breakfast. I ordered an omelette and scoffed some fruit, freshly baked bread and pate whilst waiting for it to arrive. This was probably the first time I'd ever had an Actimel. 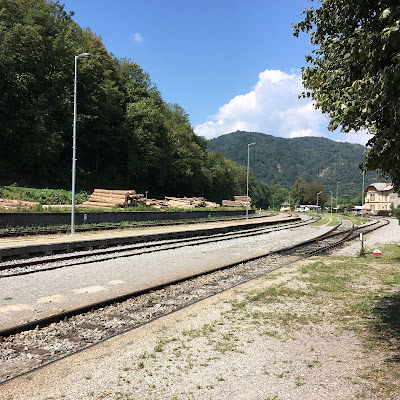 Lots of people were waiting for the train to arrive and eventually it did in the form of two carriages. Everyone was rushing to get on and for a moment I thought we wouldn't manage to get on in time. Thankfully we did though and we even managed to get a seat. 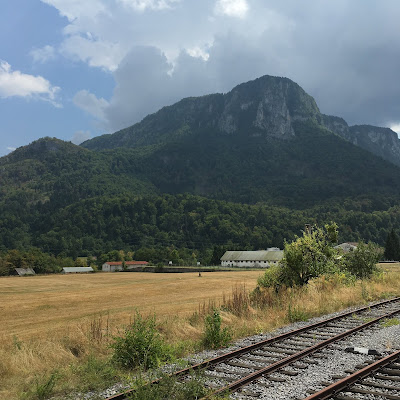 The journey to Ljubljana was very scenic. 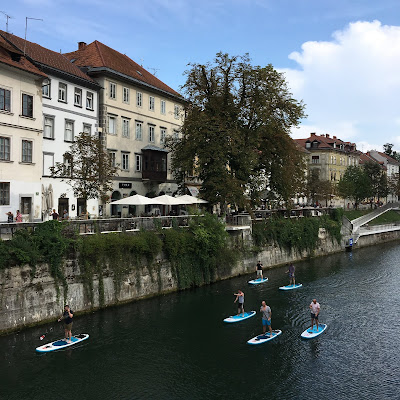 Once in Ljubljana we walked along the banks of the river Ljubljanica which runs right through the City. The river is lined with cafes and restaurants, we instantly fell in love with this beautiful city. 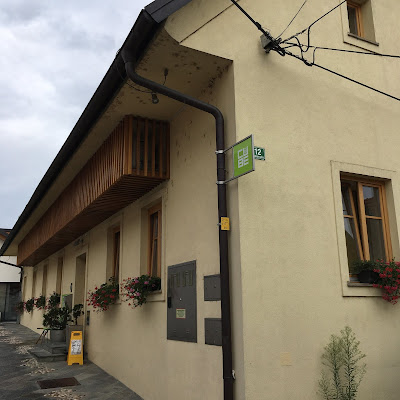 Our home for the next three nights was Cube Rooms, it cost just €133 to stay here for three nights. The rooms were really small though as the name suggests. 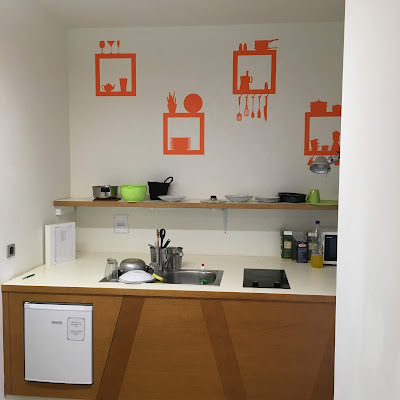 You're not confined to your room here though as there's a spacious and well equipped kitchen. 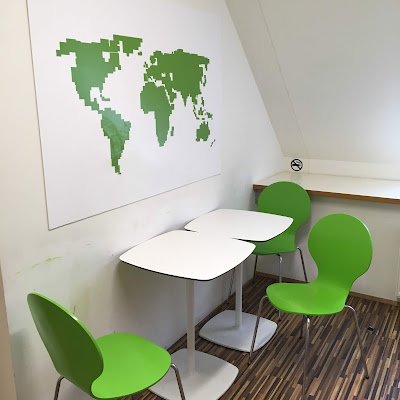 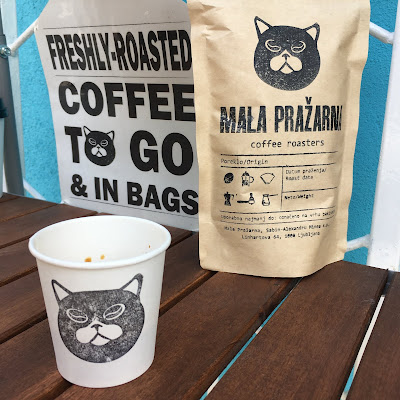 Five days of festival antics had left us feeling exhausted so in an attempt to wake up we ordered an espresso. The coffee from Mala Prazarna was excellent, as was their branding. 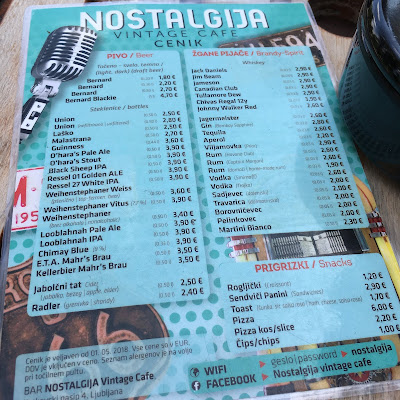 Almost next door we stumbled across Nostalgija, a really cool vintage cafe. It seemed rude not to stop for a beer! 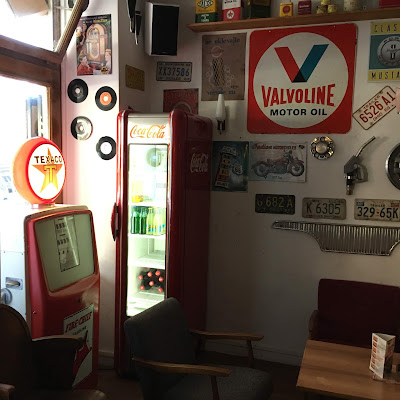 The owner was keen to please, he dashed off to change the music to something he thought we'd prefer. Moments later Psychobilly tracks came blaring out the speakers, nice one! 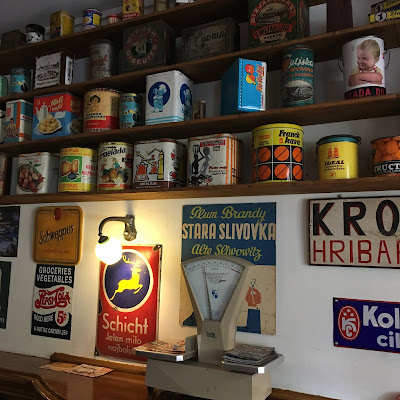 The cafe interior was like a museum, loved this place! 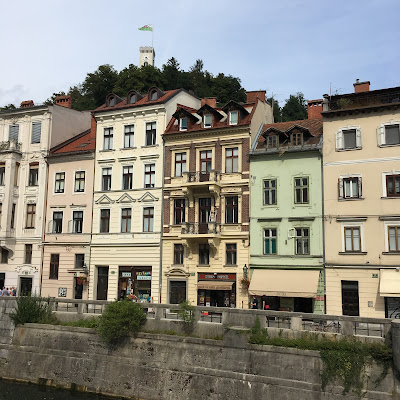 Up in the distance you can see Ljubljana Castle. We were far too exhausted to walk up to it today though, instead we wandered along the banks of the river. 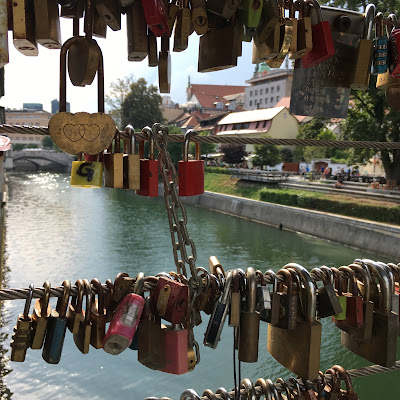 Butcher's Bridge opened in 2010 and almost straight away became a love bridge just like Pont des Arts in Paris. Couples attach their padlock to the bridge to confirm their love for each other and then throw the key into the river below. 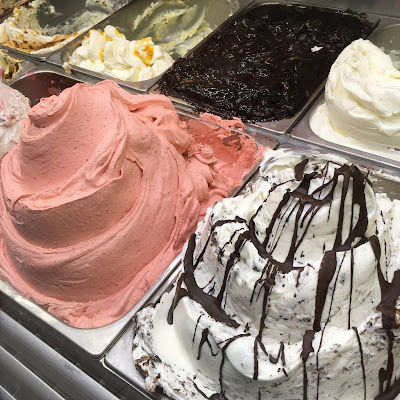 There's no shortage of places to buy ice cream in Ljubljana and the place most people flock to is Cacao on the banks of the Ljubljanica river. I don't think I've ever spent so long deciding which flavour to choose! 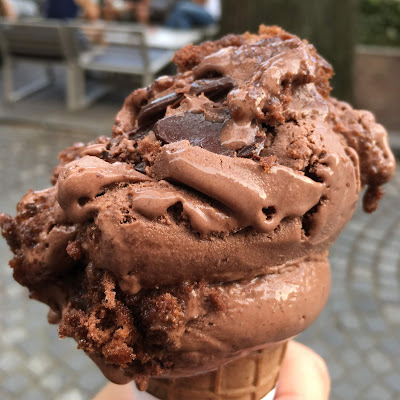 A single scoop here was huge and cost just €1.80. This was chocolate with cake and apricot jam, seriously delicious! 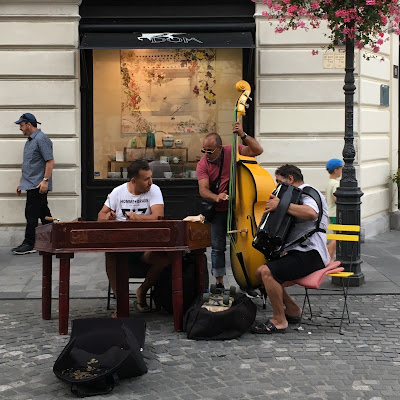 Throughout the city street performers entertain the crowds. 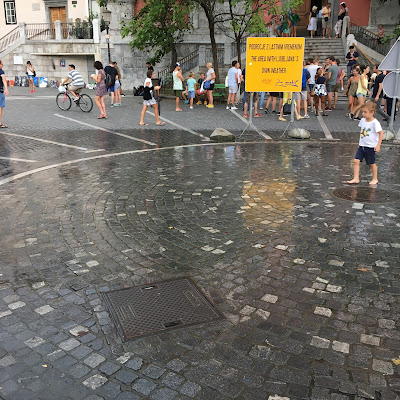 This was quite unusual, an area where it's constantly raining in Preseren Square, even though there's not a cloud in sight. If you look above you'll see the water pipes high above you. The kids love it and if you fancy cooling down in the heat just walk through the centre of it! 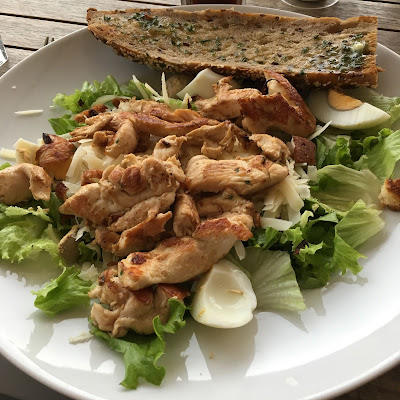 Still feeling exhausted from the festival we stopped for some dinner before calling it a day. I'd spotted somebody eating a chicken caesar salad earlier in the day and just had to have one too.

Click here for
Day 8 - More from Ljubljana
Posted by Fry Up Inspector at 11:11