Breakfast served
Monday to Friday
7am till 11am 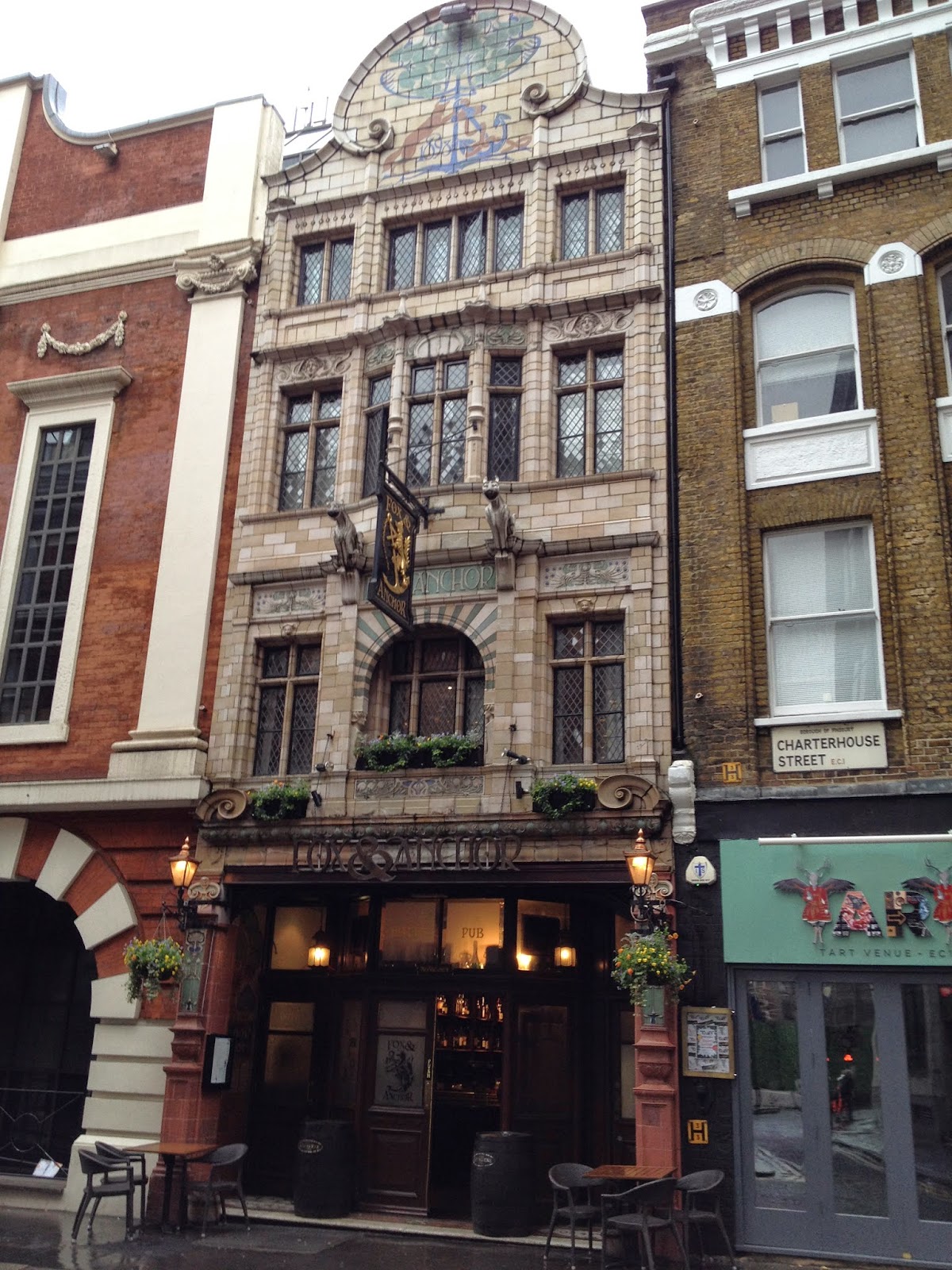 The Fox & Anchor is very close to Smithfield meat market on Charterhouse Street. 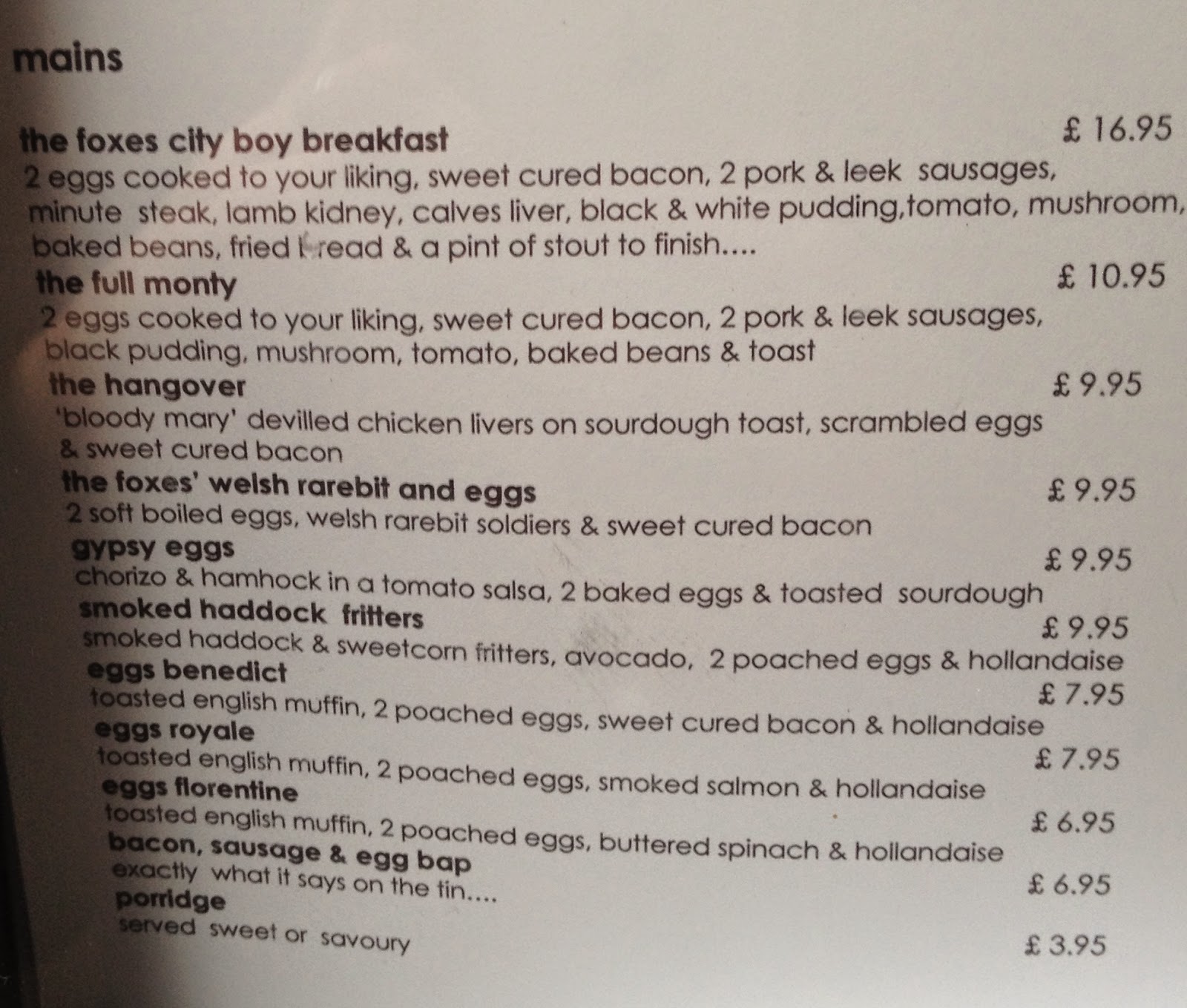 This would be the most expensive breakfast I have bought so far, it does include a pint of stout though. 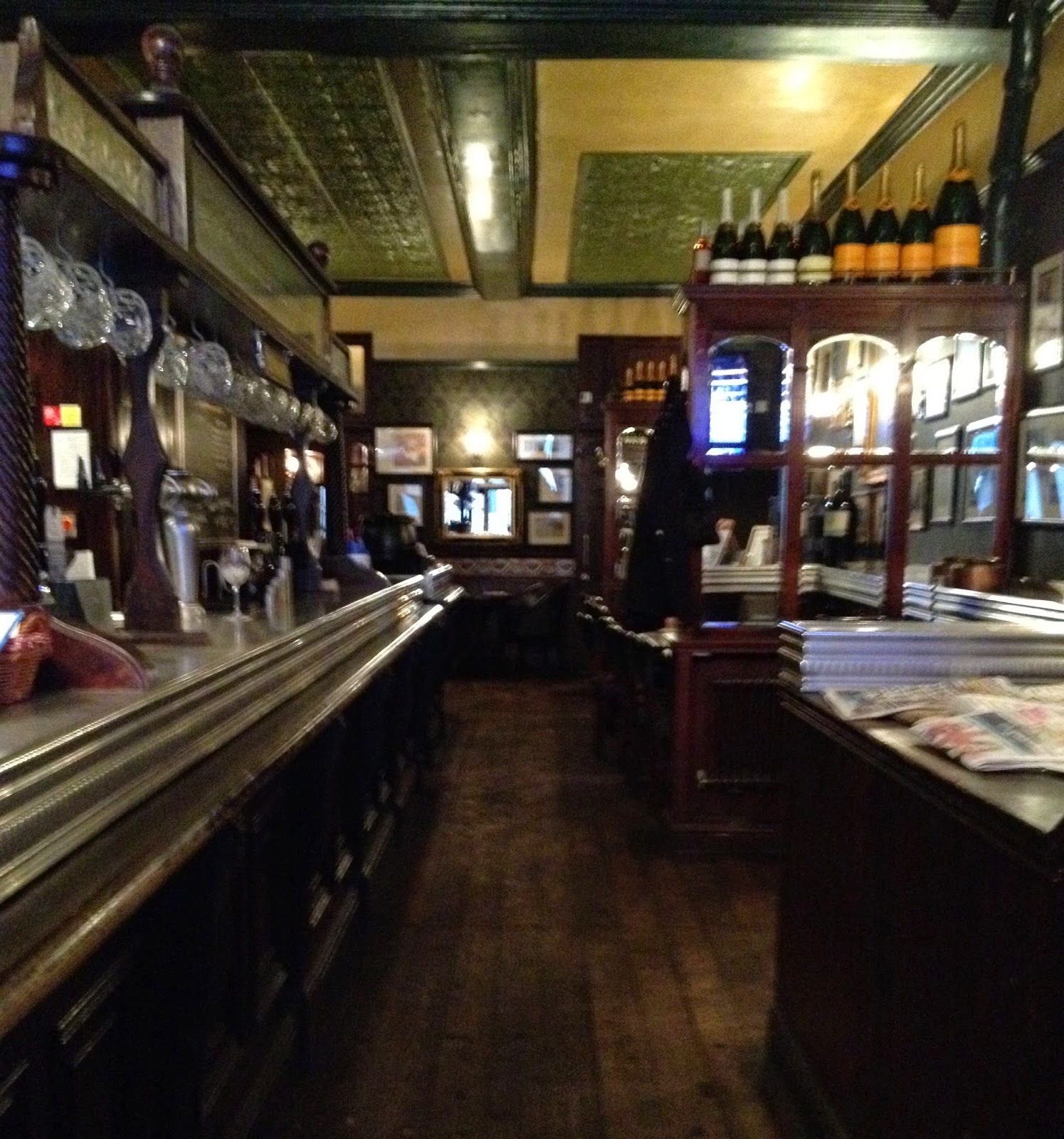 With such low light inside getting a decent discreet photo with no flash is no easy task. The interior is quite amazing though with many original features, it doesn't get much more traditional than this. 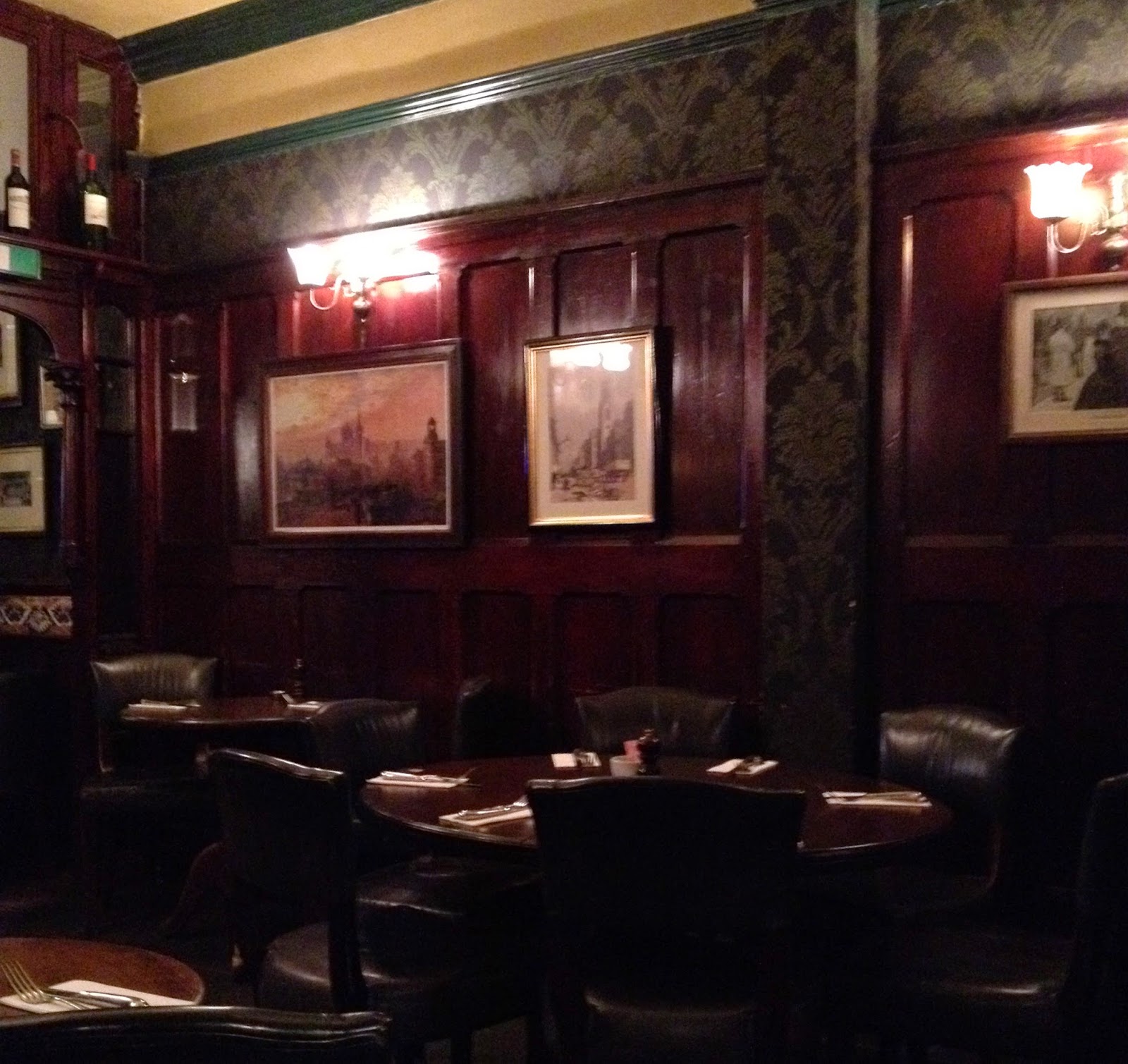 I headed into the foxes den at the rear. 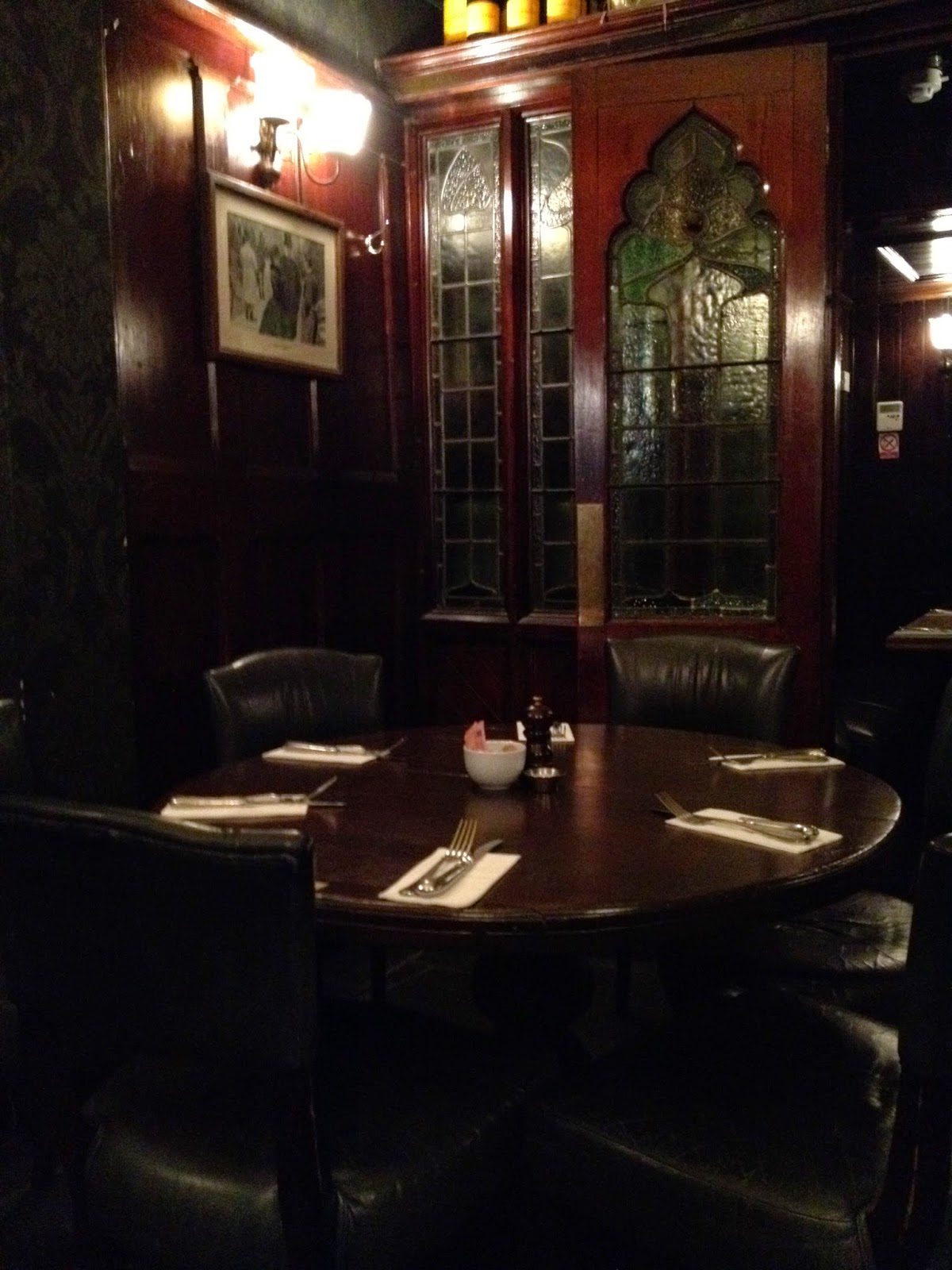 As well as a larger table there are smaller snug areas if you prefer. 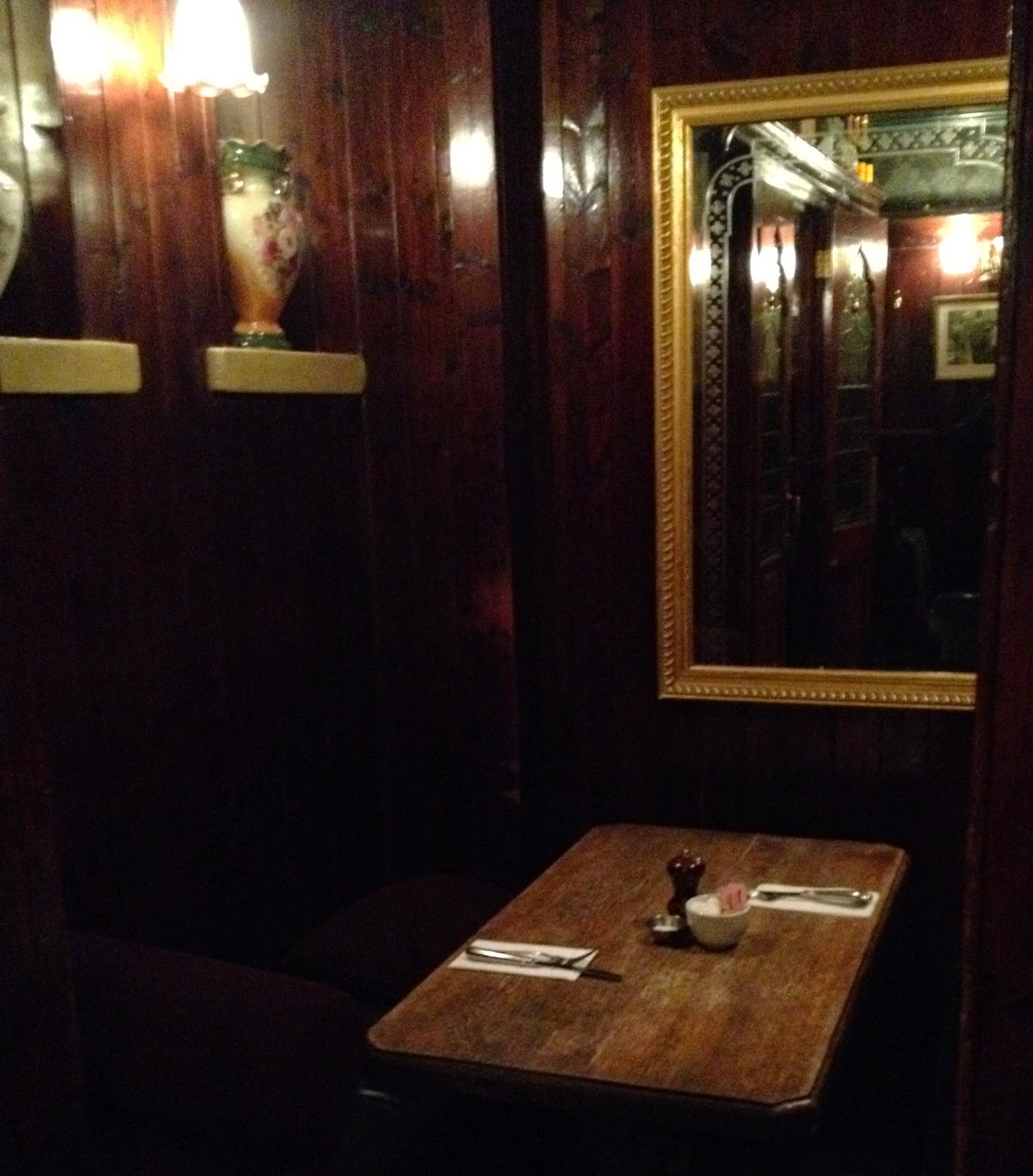 I sat in this small snug which was very cosy inside. 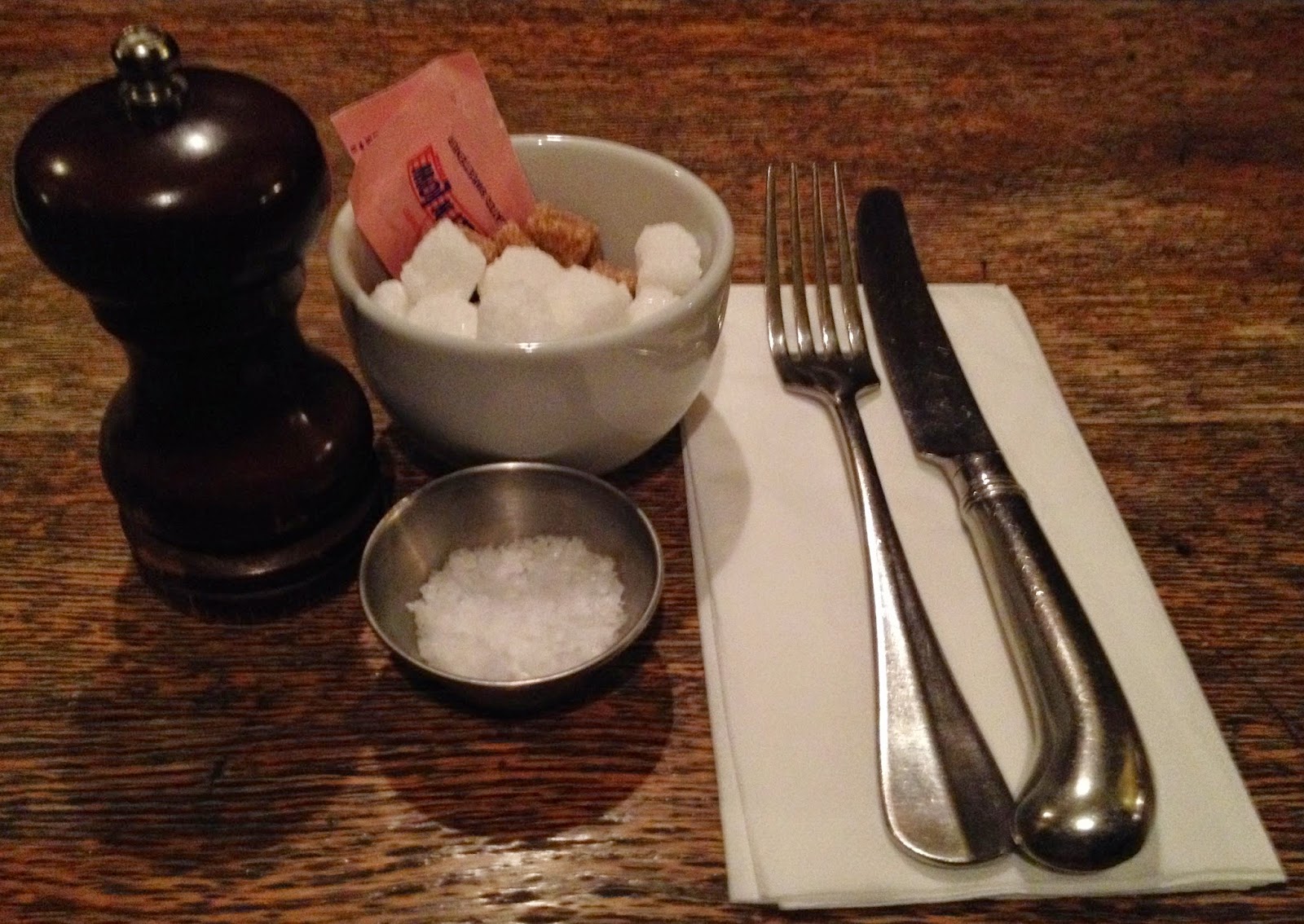 A few essentials are already on the table, a menu is bought over if you are here to eat. 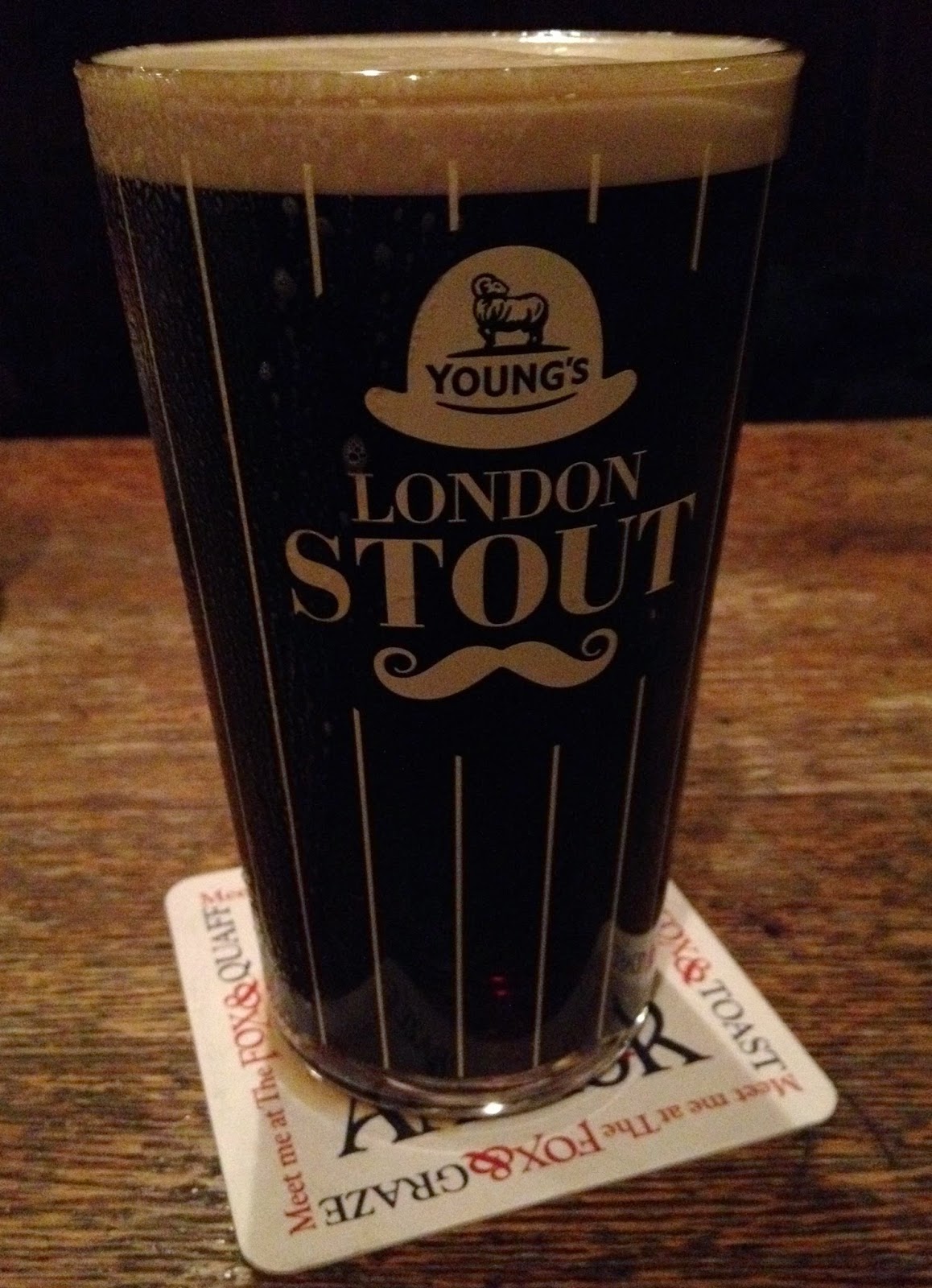 I chose to start with the pint of stout and really enjoyed it, really smooth and creamy. 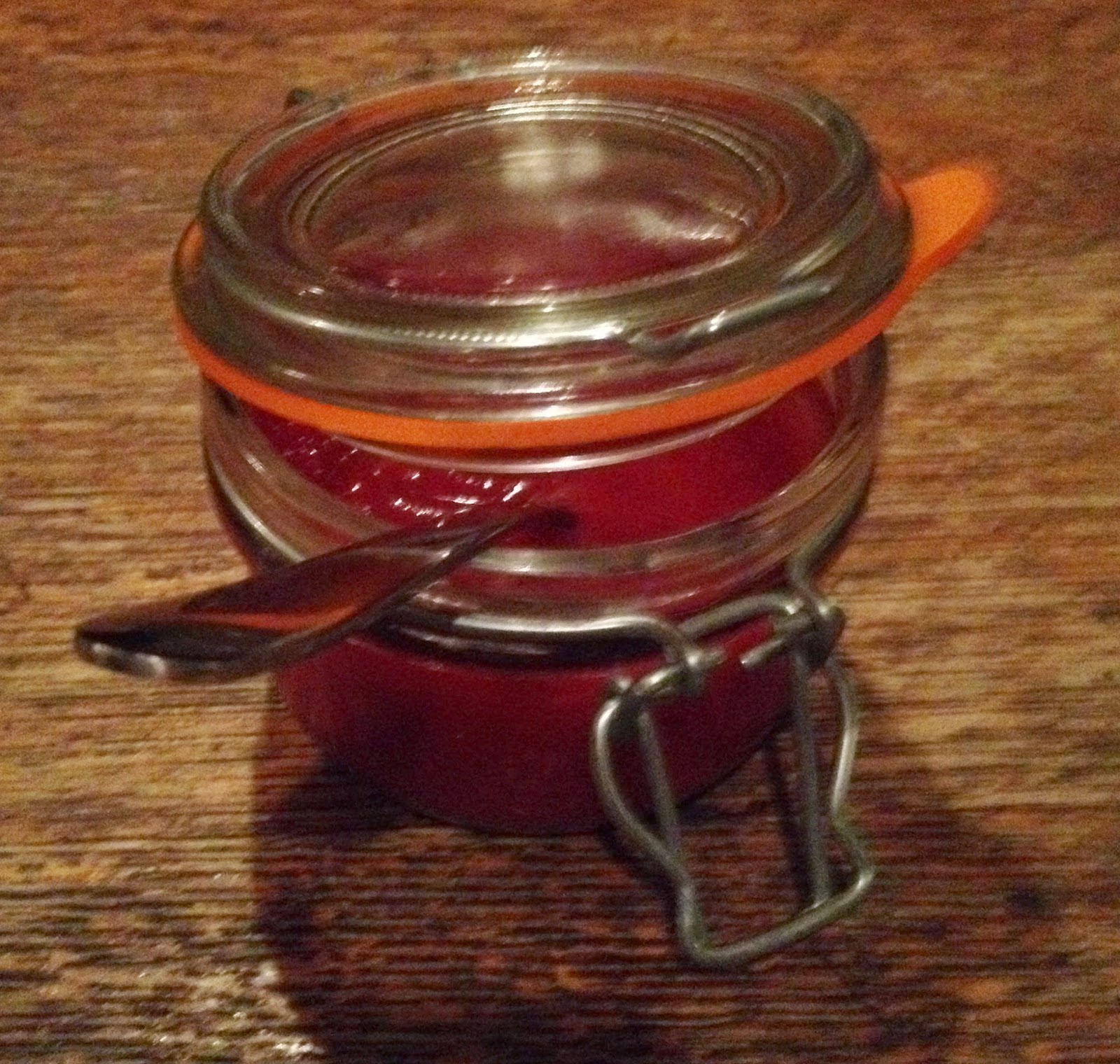 Ketchup arrives in a large jar so no worries about not having enough. 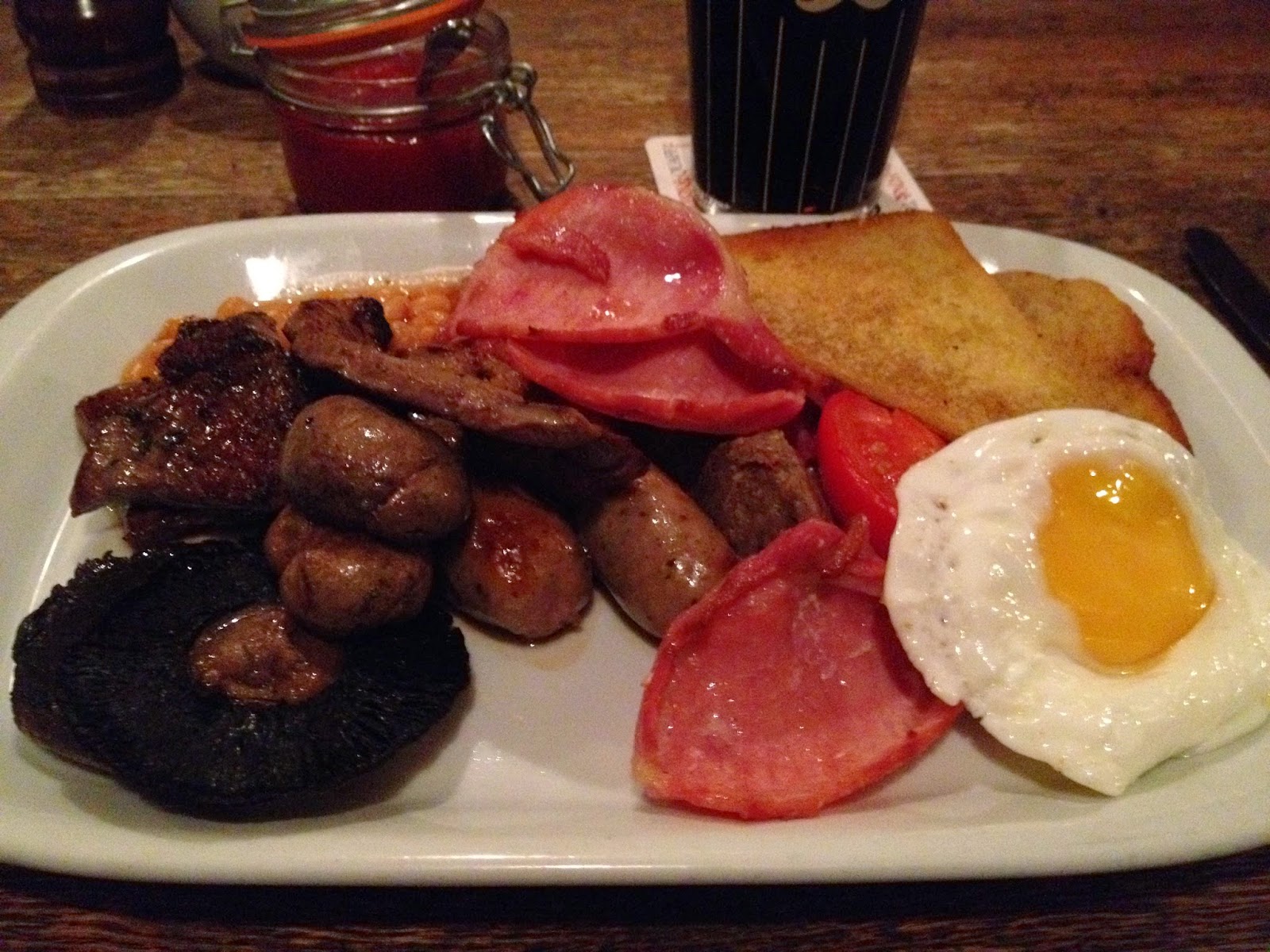 There is a lot of meat on the Foxes city boy breakfast. 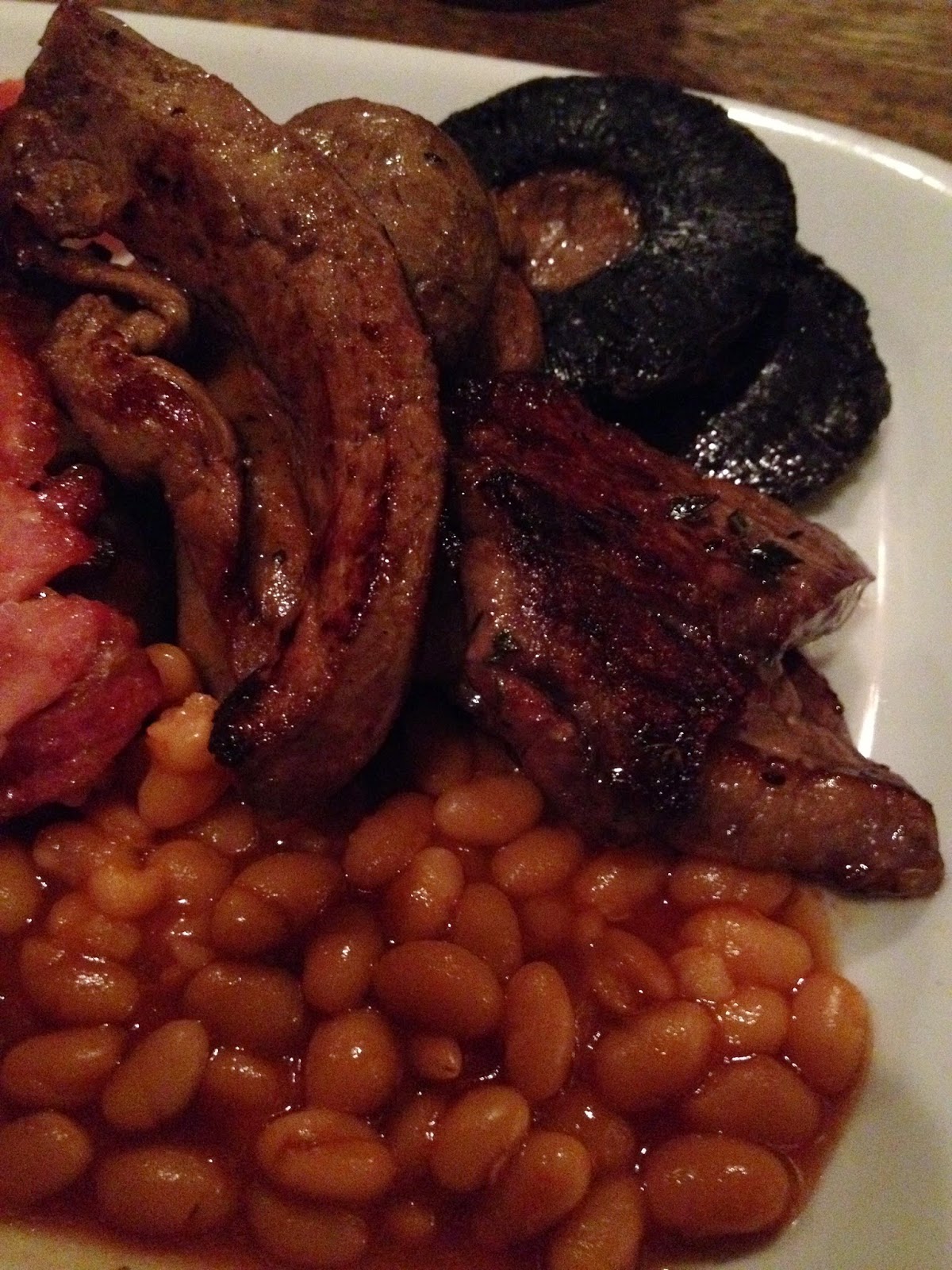 This end of the plate had some amazing things going on including steak, liver and kidneys. 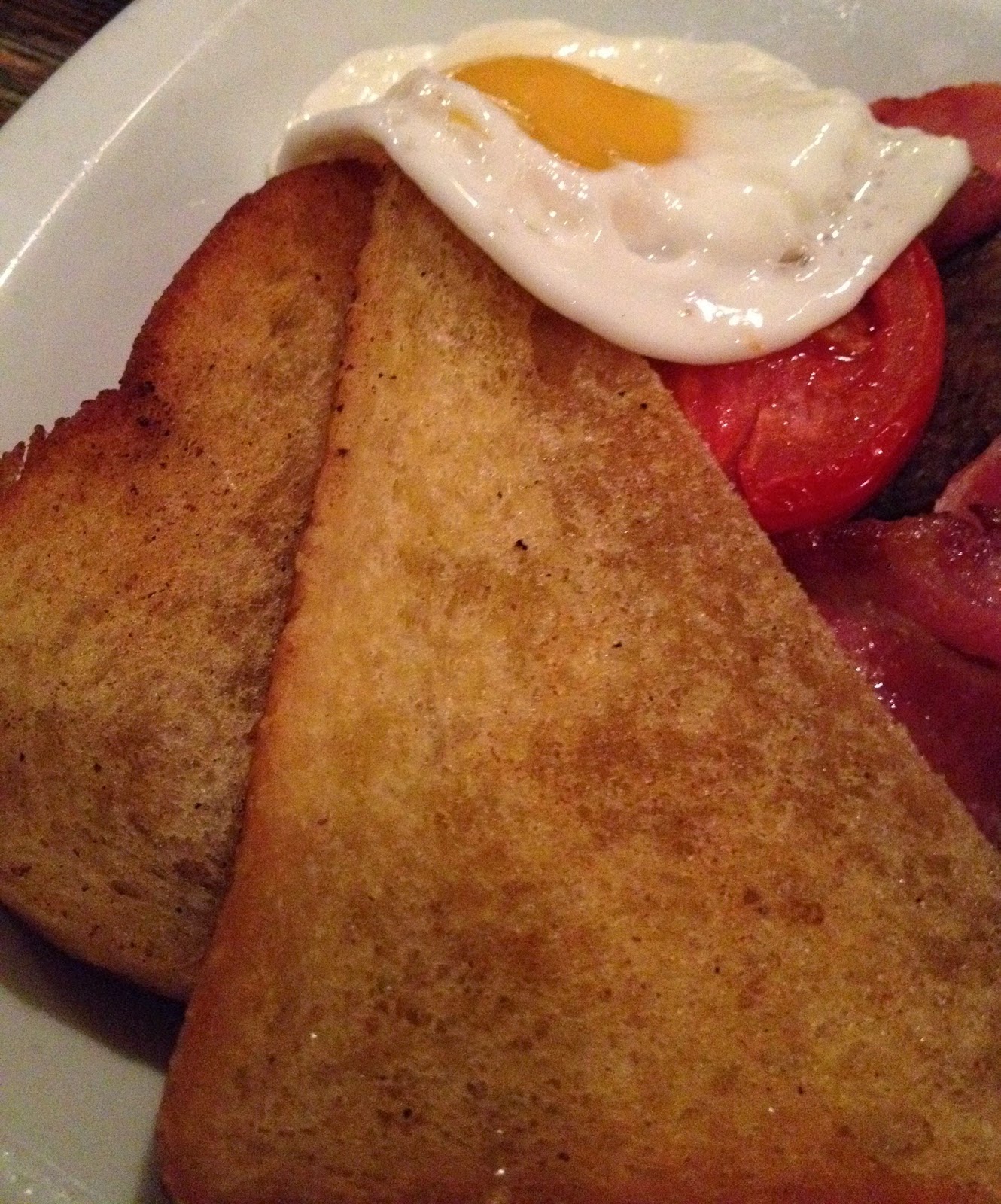 The other end of the plate contained some oil drenched fried bread, it did taste really nice though. 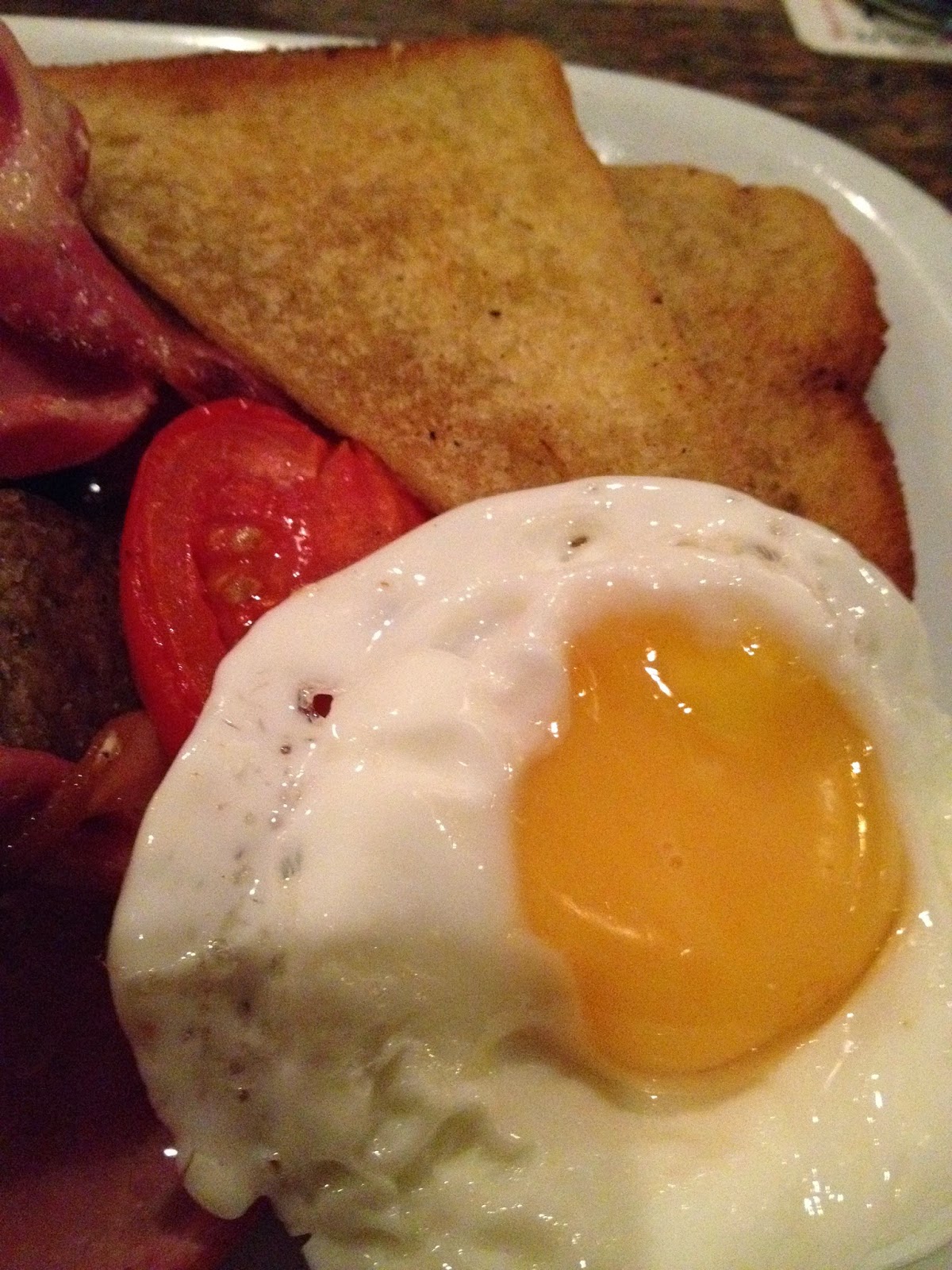 The fried egg was way too underdone for my liking and on writing this review I spotted that I should have been served a pair. 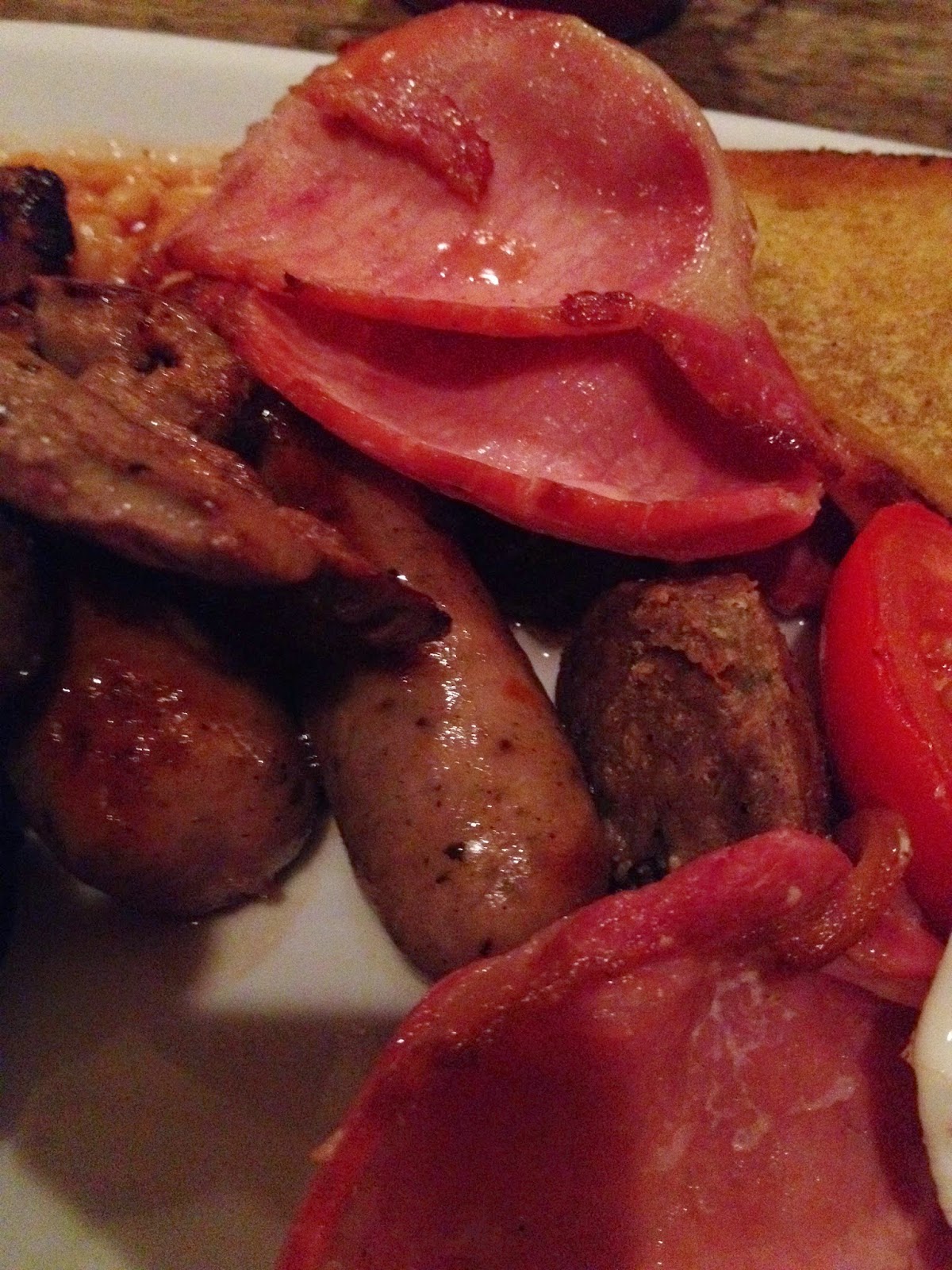 Plenty of quality bacon and sausages, this breakfast also comes with white pudding. 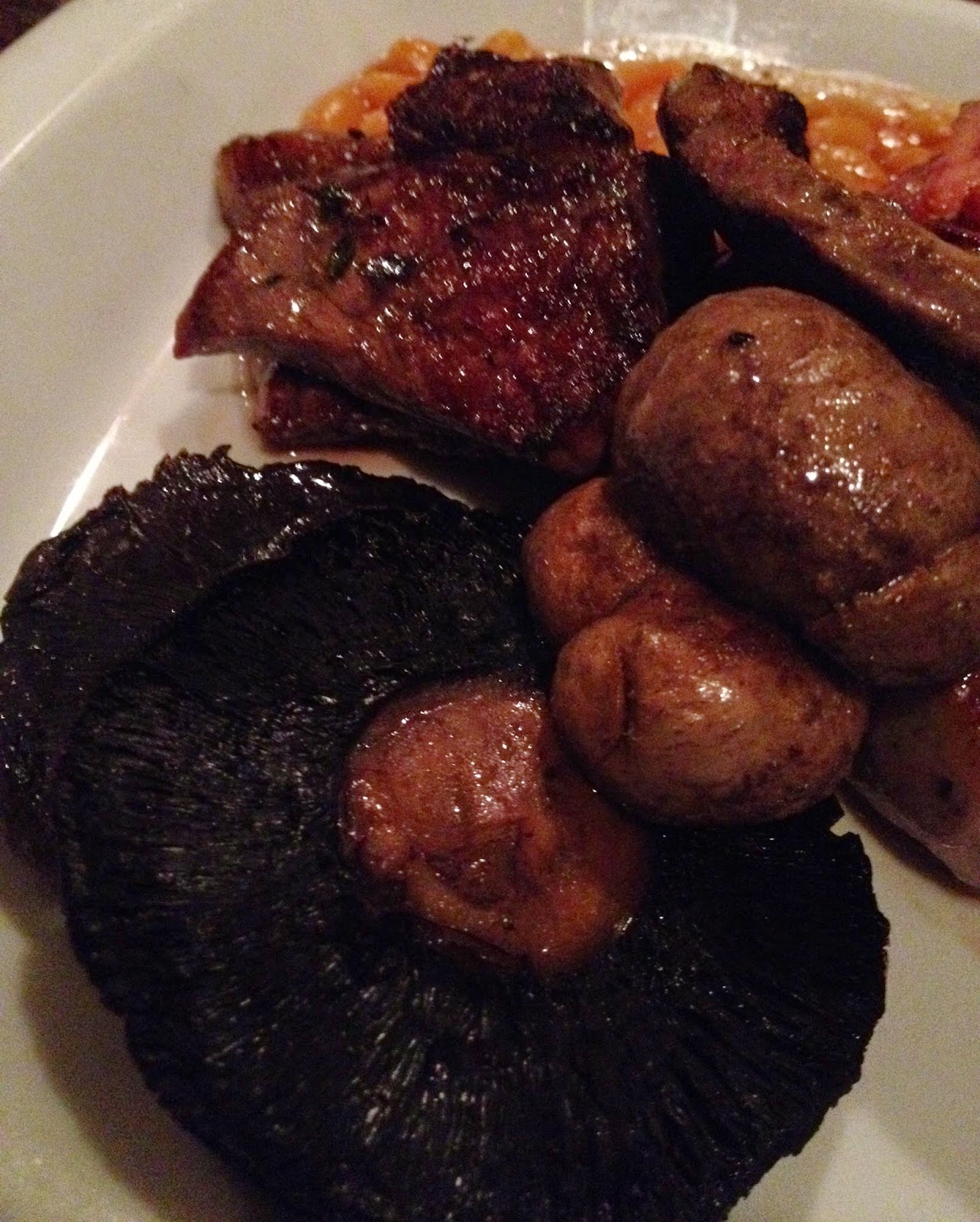 Two large mushrooms and a better shot of those lamb kidneys. 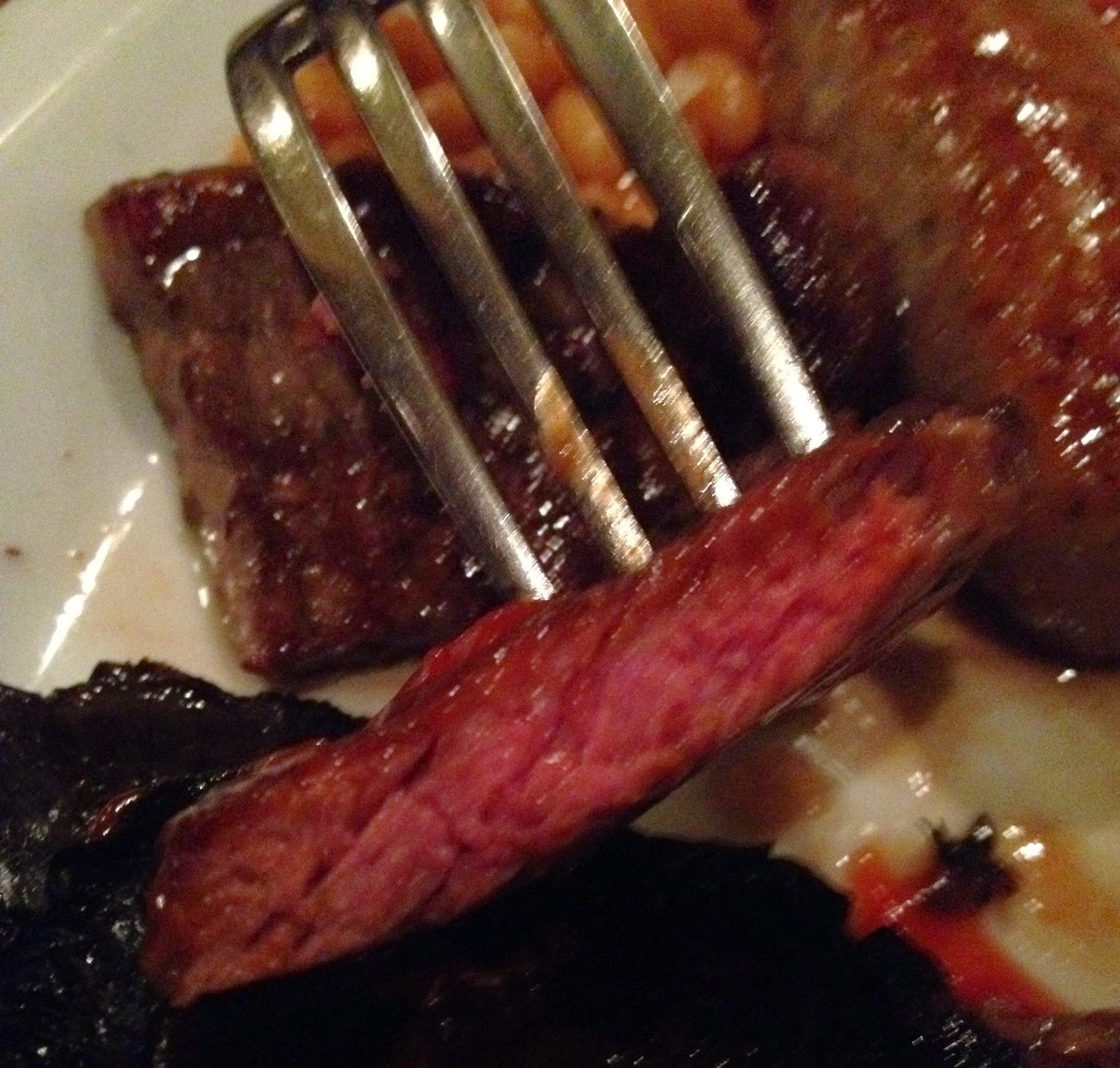 I like a rare steak so was pleasantly surprised when I cut through it. 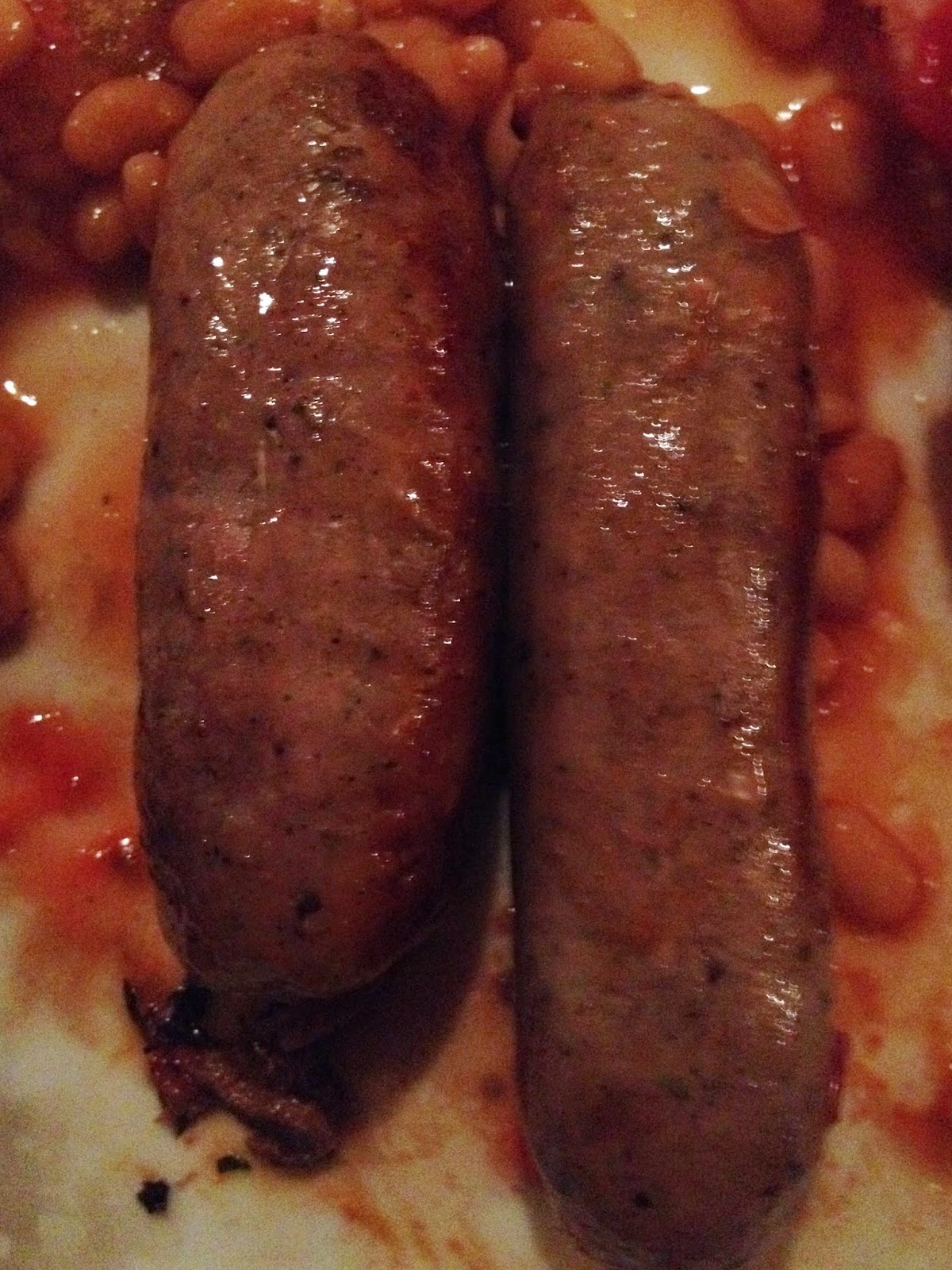 The Fox & Anchor was recently mentioned to me when I was asking about places to find a decent breakfast in London. I was told to try the "Foxes city boy breakfast" so I looked up the Fox & Anchor online, the breakfast itself was quite expensive but sounded really nice so I decided to give it a look..

Upon entering - The first thing that stopped me in my tracks was the stunning late Victorian exterior, the slender frontage made me think it would be fairly small inside. As I entered I realised it went back quite a long way and had an interior equally as stunning as the exterior. It's fairly dark inside but the low lighting does suit the feel of the place perfectly, it did however make taking photos very tricky so please excuse the grainy pictures taken on this inspection. A long bar runs up the side of the main room, tables can be found on the opposite side. I headed out to the foxes den at the back which was another more cosy looking area with a selection of little snugs going off it, each containing one table. Wood panelled walls, etched glass, and a distinctive Victorian style made for a very special environment to dine in. I decided to sit in a small snug area which felt like I was hidden away from the rest of the world to enjoy and photograph my breakfast in peace. Each table was ready for customers to arrive, neatly laid out with cutlery, napkin, sugar, salt and pepper, sauces are offered once the food has arrived. Place your order, sit back and enjoy the beautiful surroundings and the food will arrive when it is ready, simply pay on your way out at the bar. 9/10

Service - I enquired at the bar about breakfast and the barmaid told me it was available. A menu was bought over and I ordered the foxes city boy breakfast. I was asked if I wanted the stout now or after the breakfast, I chose now and the stout was brought straight over.  Around 15 minutes later the breakfast arrived, I was offered ketchup which arrived in a large jar. After eating I headed to the bar, was asked if everything was ok and paid. I was the only customer during my fairly early visit here and was made to feel welcome by the friendly and very efficient staff. 9/10

Contents - 2 sausages, 3 slices of bacon, 1 fried egg (Hmm, just noticed the menu offers 2 eggs cooked to your liking, not impressed with that!) minute steak, lamb kidney, calves liver, black & white pudding, tomato, mushrooms, beans, fried bread and a pint of stout. A potential 9/10 will be reduced though for that missing egg so.. 8/10

Presentation - A colourful meat feast of a breakfast served on a large wide plate. The undercooked egg wasn't a pretty sight and there was a bit of a gap on the plate, the missing egg or some bubble and squeak would have filled it nicely though. 7/10

The food - The pork and leek sausages were excellent, very firm with a high meat content. The sweet cured bacon was thick cut with an amazing taste and the minute steak cooked beautifully with a rare red centre. I love liver and kidneys and both found on this breakfast were delicious. I must have eaten the black pudding first without giving much thought to it but I do remember the smooth texture and great taste of the white pudding, something I would love to find on more breakfasts. Recently I have encountered no end of tasteless tomatoes, here though I encountered a tomato so full of flavour it really packed a punch when I took a bite. The beans were fairly standard and the large pair of mushrooms excellent. The fried bread was drenched in oil with very little crunch, I despaired as I cut through it but discovered the flavour of the oil was sensational, so a disappointing texture but amazing taste. The fried egg was way undercooked on top with a thick layer of uncooked egg white covering the yolk, some may like there eggs cooked this way but not me. The pint of London stout was something I wasn't particularly looking forward to having alongside a breakfast at 10.30 in the morning. How wrong was I though, this thick and creamy stout tasted great and seemed to accompany this breakfast perfectly! 7/10

Value for money - £16.95 is a lot of money to spend on a breakfast but this one does include a pint and more meat than your standard breakfast. 6/10

Veggie option - Not really but you could always go for eggs florentine or porridge.

Overall - An incredible breakfast with extras not usually found on a breakfast making it even more special. It wasn't all great though with one egg missing and the one that did show up being undercooked. The pub itself looks stunning and the service is great, meat lovers paradise for sure but vegetarians will most likely find the options available disappointing. I couldn't help thinking that such a magnificent breakfast should have also included bubble and squeak, this is London after all and it would have filled that space on the plate perfectly. £16.95 is a hefty price for breakfast and I price I don't feel particularly comfortable paying but as a one off it was a nice treat. Definitely worth a look if you're in London, are feeling flush and want to try a slightly different breakfast. If stouts not your thing then there is always the more traditional full monty for £10.95. 7.5/10