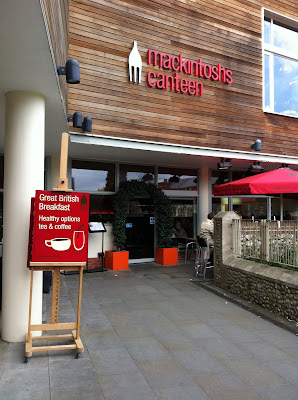 A friend had told me it was their favourite place in Norwich to eat breakfast so I was looking forward to visiting. 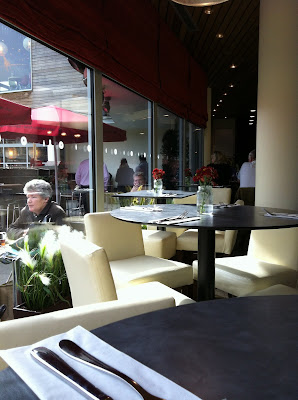 Plenty of seats inside and some outside too, perfect in the warmer weather. 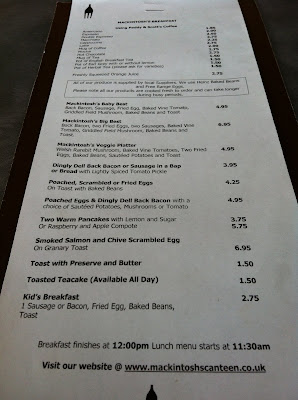 The breakfast menu is served till 12pm and has quite a good choice, take a proper look at it here. 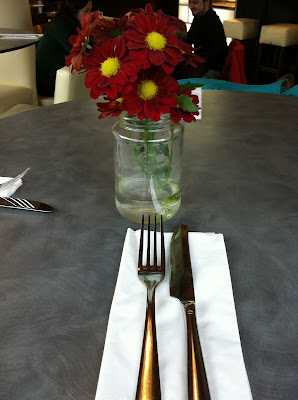 I had plenty of time to study the cutlery and flowers whilst waiting for somebody to finally acknowledge us and bring a menu over. 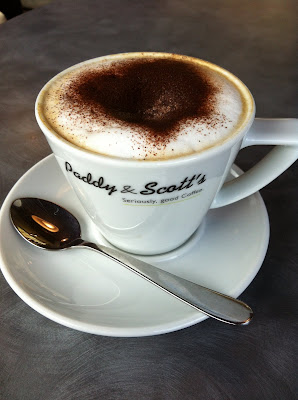 The cappuccino was delicious! 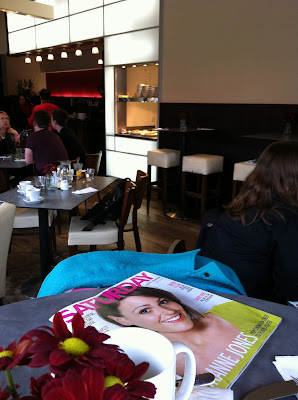 The frustration of seeing our breakfast sat in the hatch (look closely and you will spot it) for a good 10 minutes was almost unbearable. 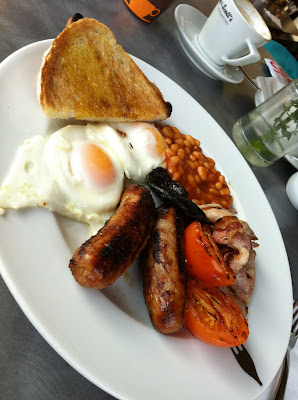 The breakfast (although not very hot) looked fantastic but I had lost my appetite after the frustrating wait for it to make the short journey from hatch to table. 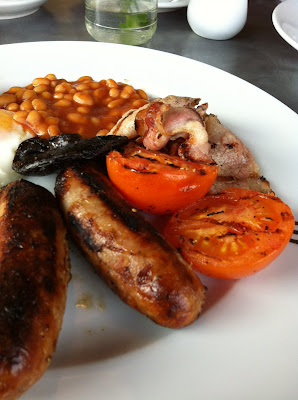 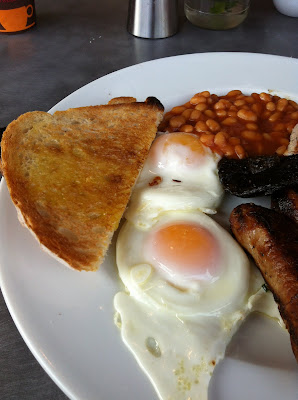 Almost a year ago now a friend of mine had told me how she thought Mackintosh's Canteen served the best breakfast in Norwich. The day had finally arrived to find out for myself and I must say I was feeling optimistic as I approached the door...

Upon entering - There is an upstairs and downstairs area, both have different menus (choose downstairs for the breakfast menu) there is also plenty of tables outside. Choose a table and (eventually) a menu will be bought over and your order will be taken. The interior is contemporary with a choice of standard tables and higher up on ones by the window, quite a nice layout really. 7/10

Service - The word "slack" initially springs to mind but they did salvage the situation eventually, let me explain. When we first entered the friendly lady on the front desk told us to sit where we felt comfortable, we chose a table in the corner in order to get good photos. Then we waited for a menu to be bought over, then we waited a bit longer, after nearly 10 minutes my girlfriend went looking for menu's herself having given up hope of anyone bring one over to us. She had no luck in finding any but finally a waiter arrived giving menu's to first a couple who had arrived 5 minutes after us and finally us. The waiter seemed friendly enough taking our order and bringing us our hot drinks over but where he went after that is still a mystery as we never saw him again. We spotted our food being placed at the hatch and from a distance it was looking great, the chef rung a bell to inform the waiting staff it was ready to be bought over to us but nobody responded. A few minutes later we were still looking at the food from a few feet away wondering if we should go get it ourselves, perhaps it was for somebody else though we thought so kept waiting. After a good 10 minutes of it sitting at the hatch and the bell being rung and ignored a total of 3 times somebody finally bought it over to us, the couple next to us looked at us in disbelief commenting on how long it had sat in the hatch for. The food at this point was still warm but not hot, my girlfriend told the waitress and a guy (I think he may have been the manager) came over. When we told him it had sat for 10 minutes he replied "it wasn't 10 minutes" thankfully the couple on the table next to us confirmed it was indeed 10 minutes and he agreed to cook her another breakfast from scratch and not charge her. I was so hungry at this point I decided to eat mine and judge it on how they chose to serve it. To be honest had I known sending it back would have resulted in getting it free I would have sent mine back too! The whole fiasco resulted in me eating half of my warm breakfast by the time my girlfriends freshly cooked one arrived. Nice move offering a free breakfast straight away when a customer complains (other places on my recent visits could learn from this) but when 3 different staff are serving one table mistakes are bound to happen. 4/10

Presentation - Everything was placed nicely on the plate and looked good. 7/10

The food - The long wait had resulted in everything being not as hot as it could have been but... Great sausages and bacon, perfect fried eggs, juicy mushroom, tasty tomatoes and beans, cold but fairly nice toast. 7/10

Value for money - So was it worth £6.95? Well I payed full price for a breakfast that had sat for 10 minutes before being bought to the table so no not really. I dare say if it makes it to the table straight away then it would be a fair price though. 5/10

Overall - Far from enjoyable and frustrating breakfast experience and I will not be returning. The place looks great and the food was really nice but unless there is good service too then it usually all goes to pieces as it did on this visit. I always rate the food on how it arrives on the table to give a real picture of what a place is happy to serve. If you are going for breakfast in Chaplefield I would suggest popping into Giraffe next door, much better in my opinion! 6/10
Posted by Fry Up Inspector at 15:21