Breakfast times as listed on website
6am - 10am daily
(sign in room said till 9am and lady on reception said till 9.30am so best to check on the day) 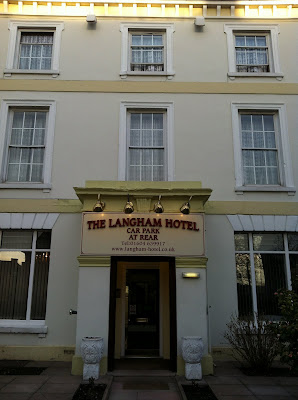 The Langham Hotel is about a 10 minute walk from Northampton town centre. 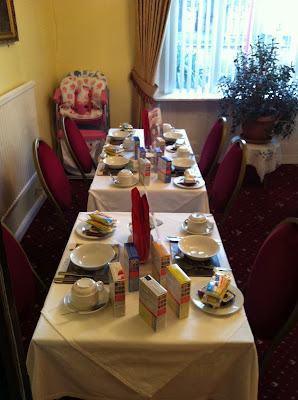 I had a sneaky look at the breakfast room when I arrived and things were looking promising! 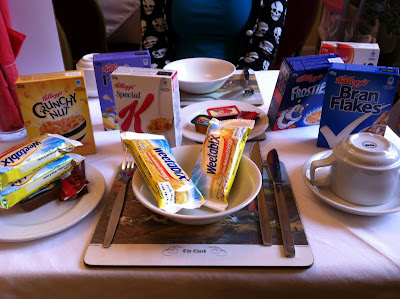 If I was the cereal inspector I would have been blown away by the choice on offer! 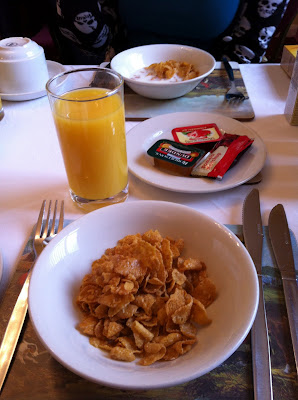 I don't generally eat cereal but went for some crunchy nut cornflakes whilst waiting for the cooked breakfast to arrive. 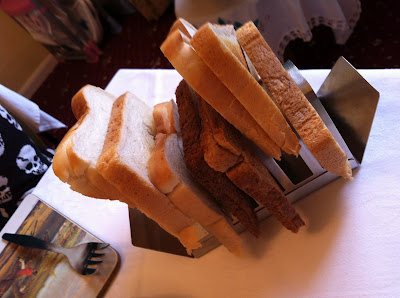 Plenty of toast was available. 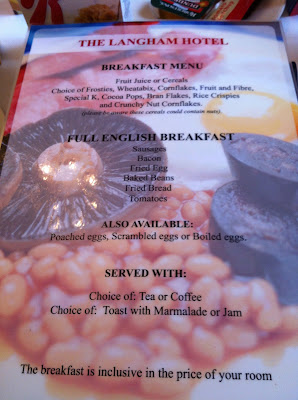 I was so looking forward to trying the fried bread. 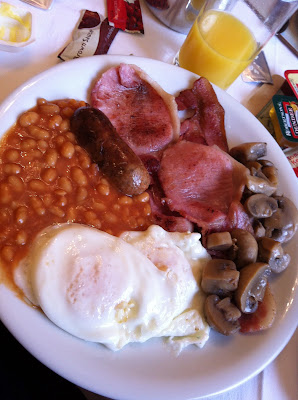 Wait a minute.. Where is the fried bread? The menu stated tomatoes too but tinned mushrooms were served instead. 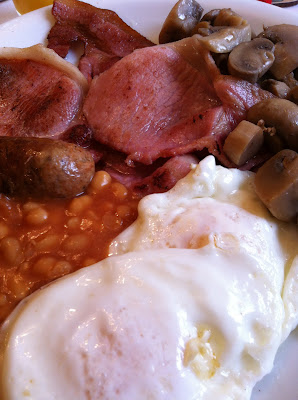 The eggs looked ok on the outside but were very undercooked inside.

It's amazing how quickly time flies by and it didn't seem very long ago since I was last in Northampton, I usually stay at the Aarandale Regent hotel on Barrack Road but as it had recently shut down I decided to try out the Langham Hotel instead. I was off to the excellent Bedlam Breakout psychobilly festival and the Langham hotel was quite close by to the venue, had onsite parking and was serving a full english so it seemed like a good plan. Having had an excellent day at Bedlam Breakout I can't remember too much about returning to the hotel that night, I somehow managed to wake up feeling strangely healthy despite drinking non stop for for 10 hours the day before! Breakfast soon entered my mind and I had looked at the breakfast menu the previous day noticing it mentioned fried bread, this I was well chuffed about so up we got and headed downstairs...

Upon entering - The breakfast room is large and has a good selection of tables set up ready for breakfast, so set up in fact it is quite an amazing sight when you first walk in. Each table has 9 different cereals, jam, butter, condiments, cutlery, plates, cups & saucers, milk jugs, serviettes, glasses and menus. I have never seen so much crammed onto a table before, although I liked how equipped for breakfast each table was it did feel very cluttered, that said though I did like how over the top it seemed. What I wasn't so keen on though is the fact that the full english described on the menu is not actually what you get on the plate when it arrives. Take a seat and the staff take your order and bring the food over when it is ready, everything else can be found on the table. 7/10

Service - The staff are very friendly and helpful but when I asked for fried bread I was told "I will get you some" however it never arrived and although listed on the menu nobody else in the room had any so I suspect it is not something they serve. I would have preferred to have been told it was not available than be left waiting for something that was not going to arrive, if they don't serve it that's fine, but take it off the menu's and tomatoes too as they were not served either! Despite this the staff were great at clearing things from the table once finished with to make more space and ensured there was plenty of hot drinks and juice. So anyway, good service but the menu's need updating as they were misleading. 6/10

Presentation - Everything sat nicely on the plate but the mushrooms screamed "I'm tinned" the second I saw. The plate was lacking something red, tomatoes maybe?? 6/10

The food - The only word to describe the sausage is "weird." It didn't taste too bad but it had a strange economy texture to it and was quite herby, it was ok but far from great. The bacon was good though and there seemed to be plenty of it as there was with the plentiful sea of beans. The fried eggs looked ok at a glance but were hiding a secret inside, as soon as I cut into them out spilt a flood of uncooked egg white along with the yolk, not good. The mushrooms were tinned and really quite grim, the toast was quite nice though. 4/10

Value for money - It is included in the price of the room (£60 per night for a double) and although not great there is plenty of it and there is always err... cereal. 7/10

Veggie option - No, not according to the menu anyway.

Overall - The hotel itself was great and a joy to stay in but I found the breakfast experience a tad frustrating with its misleading menu and staff giving me false hope (I wanted fried bread!!!!!) It seems like a lot of thought has gone into ensuring the tables are well prepared and the staff seem friendly enough but a few simple changes are needed.. Update the menus, decide on when breakfast is served until, offer a veggie option, use proper mushrooms and cook those eggs for a bit longer. 6/10

On a return visit to the Langham Hotel I decide to see whether the fried bread listed on the menu was something that actually existed. I specifically asked for it a breakfast time and waited till the plate arrived, hidden under the eggs I spotted it! 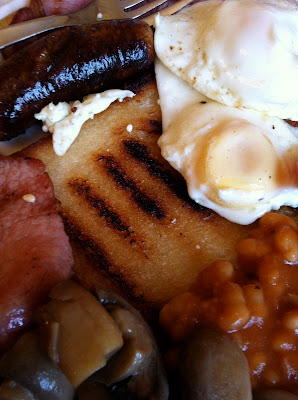 The fried bread was not as crunchy as I had hoped for and was dripping with oil, it was however much better on the second morning. 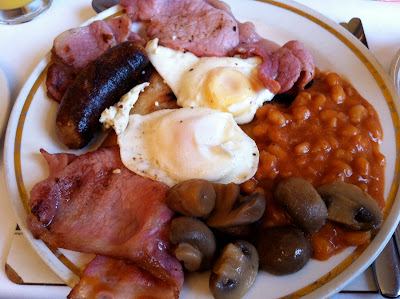 There was plenty of bacon but the mushrooms still tasted tinned, the sausage still "weird" and the eggs this time were a bit overcooked. I must say though, the eggs on the second morning (which I forgot to get a photo of) were perfect! 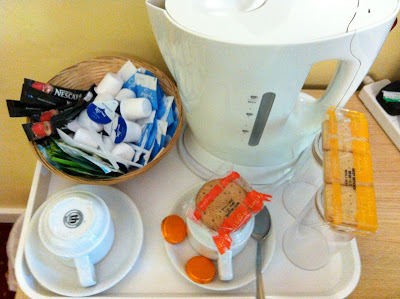 I was well impressed with the drinks tray in the room with plenty of supplies, biscuits and even a couple of chocolates, nice touch!