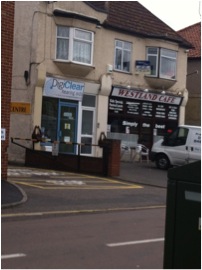 The Outside of the café didn’t want them to spot me so I took from a distance as you can notice there is a van outside so popular with the local business trade. 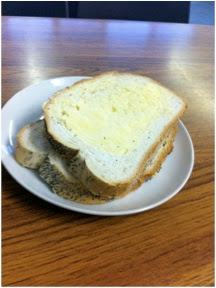 Nice two slices of fresh bread given for the breakfast free of charge. 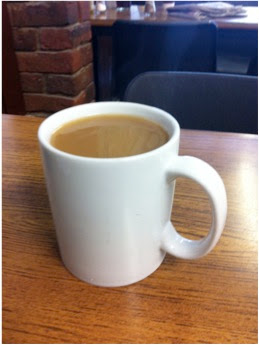 Nice Mug of Tea, strong and milky. I could have had more milk if I wanted to but decided otherwise. 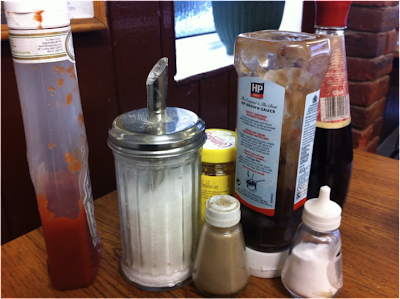 The Condiments which were all on the table ready for me to use. I like the fact there was mustard on the table. 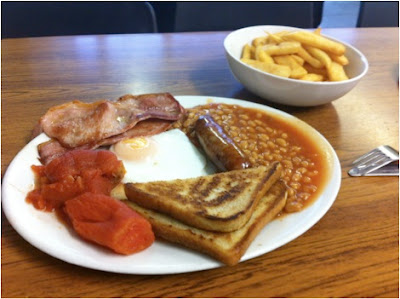 
Another day in Hornchurch, and another fry up inspection, I know where to go this week because I use this café quite a lot, this café that I will be visited is called Westland Café, which is based on Westland road Hornchurch.

Upon entering – There is a small car park outside the café and a few spaces along the road as it is a residential street, they have only got one main entrance to the café which is on Westland road. As soon as you walk in to the café it feels like you have been taken back to the 1970’s with the furniture, the tables are on both the left or right with wooden benches, and the counter is directly in front of you as you walk in. The menu is on the right by the counter which is very well displayed especially for what I was having, they tell me that they will bring cutlery over to me, and that all the sauces (Heinz) was on the table. 9/10

Service – Where do I begin, as soon as I walked in I went straight to the counter and ordered as you do, I go in quite regular so I normally know what I want. This time I had Breakfast C, and asked for an addition portion of chips, which I got, he then asked me if I wanted homemade chips or mcains I say homemade, he then goes do I want tea or coffee or hot chocolate, I say tea and then he goes “I’ll be round every 5 minutes to see if you want a top up or not” 9/10

Contents – Three slices of bacon, 3 tomatoes which were tinned, two fried slice, beans, homemade chips, butchers sausage. 7/10 (only because the tomatoes were tinned)

Presentation – Everything came out perfectly I’m so glad that the egg wasn’t touching the beans and there was a barrier the only let down was how the tomatoes sort of leaked everywhere. 7/10

The food – Ok where to start, the bacon was amazing, the sausage was really nice too, the egg was perfect, the fried slice was a bit burnt but it was nice, the chips were to die for, and I left the bacon. I even asked the guy who served me (the owner) where he got the produce from (sausage and bacon) he said the high street butcher, so always a plus. 9/10

Value for money – Slightly pricey breakfasts start from £5 up to £7 for one with Kidneys and Liver.

Veggie option – Didn’t ask but I think they might do one?

Overall – A really nice little café would recommend it to anyone who ever comes to Hornchurch or even the south of Essex. I wish they did some black pudding which sadly they don’t as apparently they can’t get it in the butchers down here, only in Sainsbury’s and Iceland. Hopefully the fry up inspector puts this on his site for me, and hopefully I hope you have read it apart from the tomatoes this place did really well. Overall a score of 9/10