Arriving in Split and Kastel Stari 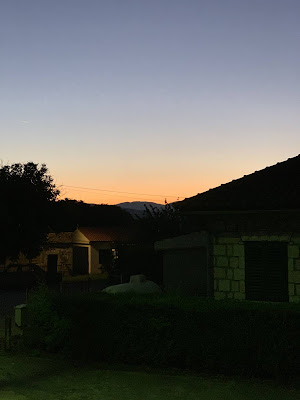 Sleeping on the night train wasn't something I thought I'd manage to do but the sound of the train clunking along the tracks was incredibly relaxing and sleep did happen! I do recall waking up to the train stopping for sometime and hearing dogs barking as guards examined underneath the train, not sure what that was all about though! The cool air blew onto my face from the open window and eventually I woke once again and pulled the curtain back to be greeted by the sun appearing over the mountains. I woke Ella up and we watched the most beautiful sunrise as we passed through mountainous terrain on the outskirts of Split. 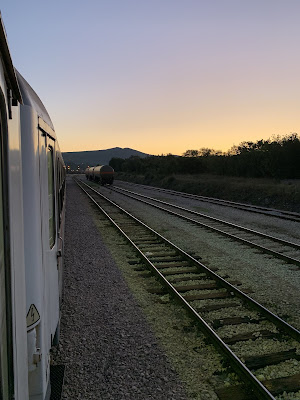 The train slowly crawled up the mountainside for a good hour until eventually it reached flatter terrain. 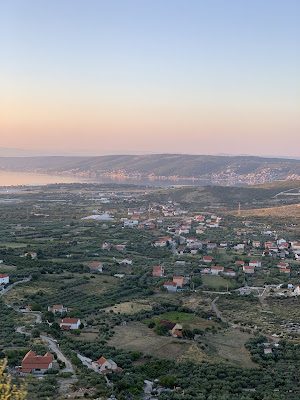 As the Split coastline came into sight the train gathered speed again on the final descent. I would highly recommend the night train to Split, hands down the highlight of the entire trip! 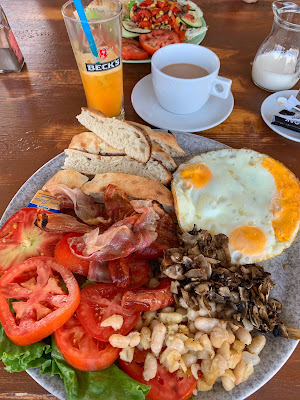 With our cases stored in luggage lockers we left the station and stopped at the first cafe we saw for some breakfast. I hadn't come to Croatia to eat full English breakfasts but this morning I was really craving one. What arrived was more like a full English salad but it tasted great and certainly set us up for the day. The best part was probably the freshly squeezed orange juice, so refreshing! 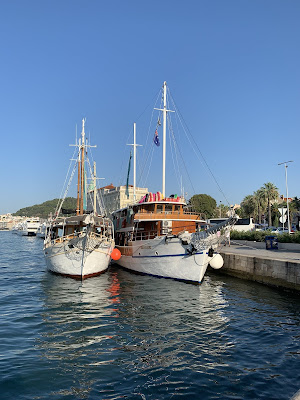 The train station in Split is right outside the port and a very touristy area lined with currency exchanges and restaurants. There's a toilet along here which you can pay to use, just be aware though that the attendant will rush to check down the toilet pan as soon as you leave the cubical! 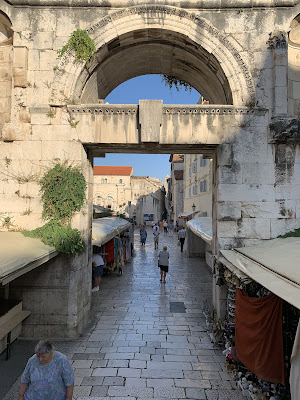 Diocletian's Palace covers about half of the old town, it was built in the 4th century, took about 10 years to construct and in 1979 was listed by UNESCO as a World Heritage Site. It's a stunning palace that's well worth checking out, it's also incredibly touristy though with souvenir stalls everywhere. 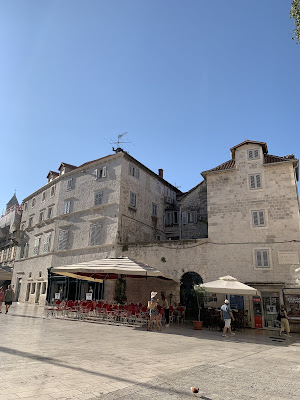 I was feeling hot and despite getting some sleep on the night train I was feeling incredibly tired. My wife went to explore a park whilst I tried to stay cool in the shade. I wasn't finding the locals to be particularly friendly, one waitress tutted and rolled her eyes as we ordered some coffees. 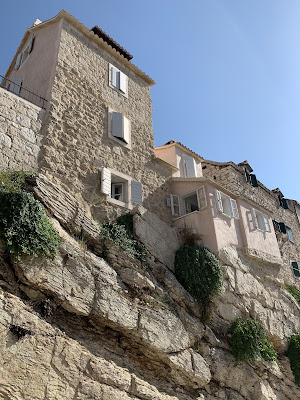 We probably spent no more than 5 hours in Split before we'd seen enough. We collected our luggage and caught a bus to nearby Kastel Stari where we'd be spending the next 3 nights. 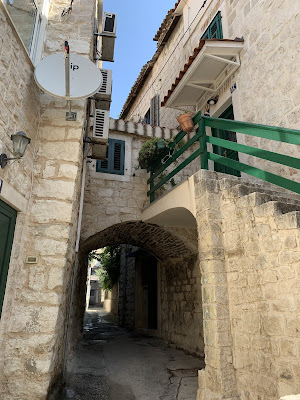 Kastel Stari was beautiful! Lots of stunning buildings with a network of alleyways connecting the streets together. We fell in love with this place as soon as we arrived. 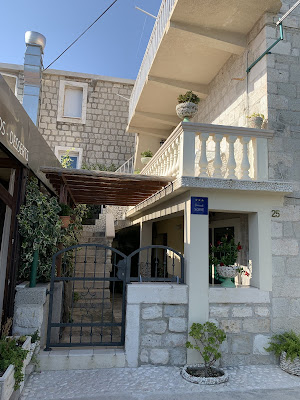 We'd booked our accommodation through Air BnB and managed to find a lovely double room beside the sea with it's own terrace for just £30 a night. 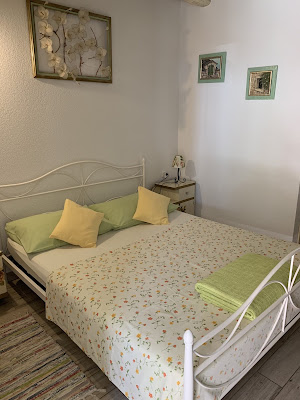 I was looking forward to sleeping in a proper bed again tonight! 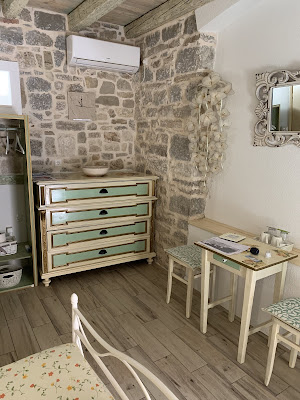 The accommodation was well equipped and really quaint. For me though the best thing about this place was definitely the air con, much needed in this heat! 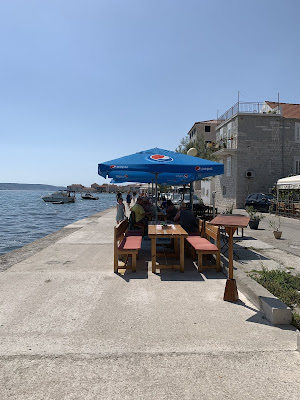 This was the view just 10 meters from our front door. There were lots of restaurants and bars along this stretch of the coast so no end of places to eat at. 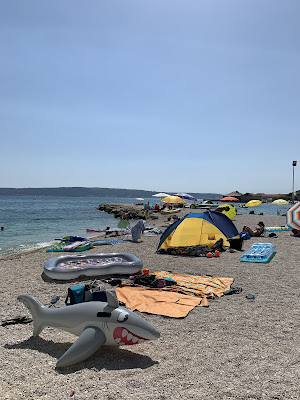 A short walk away we found the beach where we discovered there were no jellyfish visible in the sea, a good job we'd bought our swimwear then. 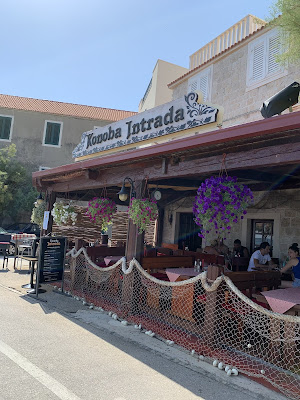 It was time for a spot of lunch and this restaurant had been recommended by the owner of our Air BnB, so we decided to eat here. 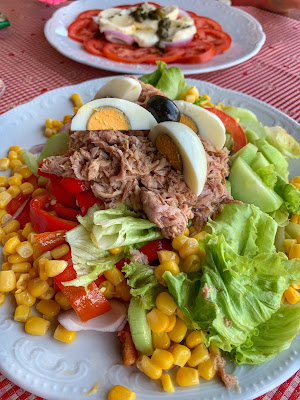 It's not often you'll see me order a salad but I was really craving one. It was actually really nice to eat something that wasn't fried for a change! 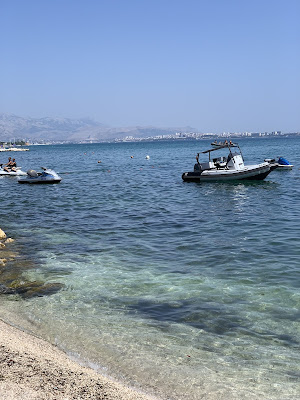 We took a walk along the coast after lunch and went for a quick dip in the sea. 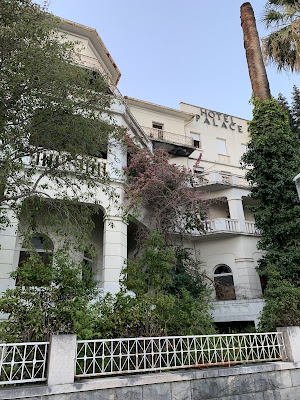 Then we spotted this derelict hotel, the third one I'd come across this year. We just had to take a little look inside Hotel Palace. 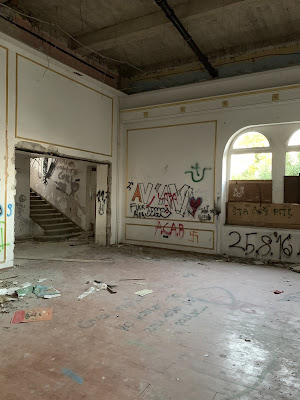 We only got as far as the main foyer and heard people upstairs so decided not to explore it any further today. 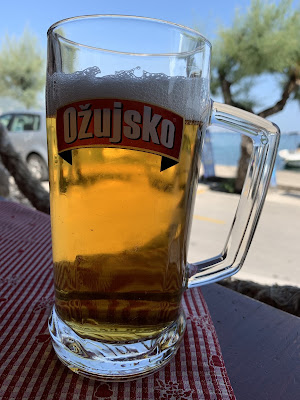 We hadn't really made any plans to do anything particular during our time in Kastel Stari except relax for a few days. We pondered over whether we could manage to do this or instead end hiking up a nearby mountain as we enjoyed a beer, only time would tell! 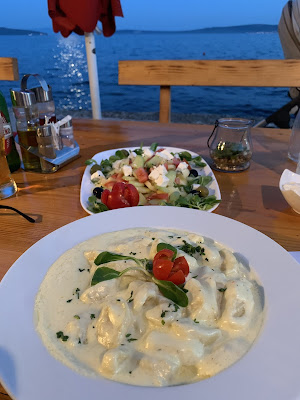 Later that evening we ordered gnocchi and salad and enjoyed it on the waters edge underneath the moonlight, magical!

Click here for Day 11
Taking it easy in Kastel Stari
Posted by Fry Up Inspector at 18:58