An unexpected visitor and more from PRH 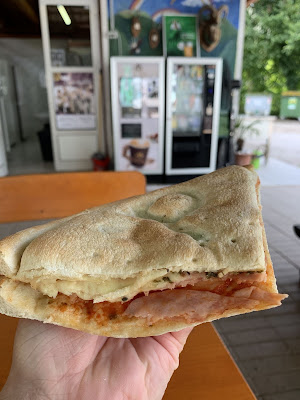 Feeling slightly hungover we prepared to eat ourselves better at the camp site bar. My wife enjoyed some fresh bread with tomatoes and I chose another pizza sarnie. 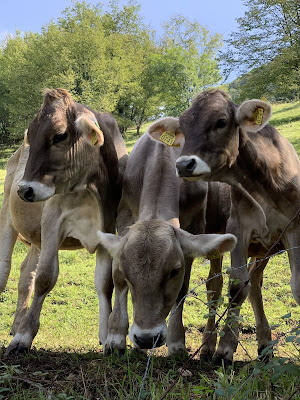 Our plan for the day was to return to the restaurant on the mountainside. We wanted some peace and quiet away from the crowds and my wife was keen to sketch the views from up there. This time we took a countryside path behind Tolmin where we met these friendly cows grazing. 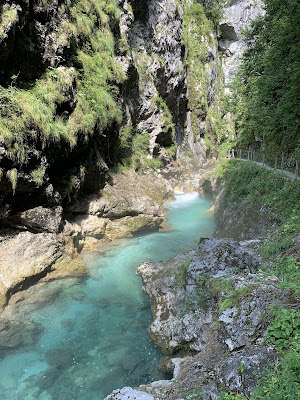 The path led us to the back entrance of Tolmin Gorge which we explored for a while. Not for too long though as it was really busy so we made our way up the mountainside again. 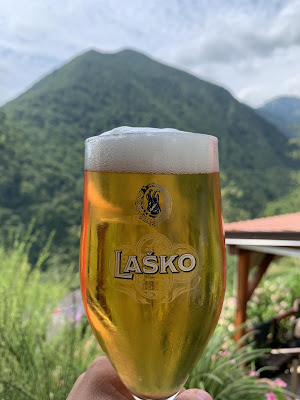 After such a long hike in the blazing sunshine a cold beer was definitely needed! Just as we sat down to enjoy the peace and quiet a voice could be heard beside us saying "Are you here for the festival too?" A festival visitor from Australia then announced he would join us for a beer and wait for us to leave so he could walk back down the mountain with us. Our plan of relaxing for a few hours was shattered as we politely listened to the chap talk at us for what seemed like an eternity. Whenever we talked to him his response was "yeah, yeah, yeah" as he waited for a pause so he could continue talking. He really had no interest in anything we told him! 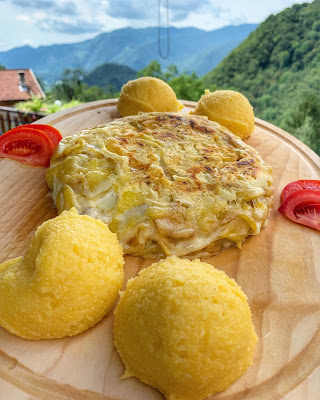 We mentioned we were here to eat but he wasn't going anywhere. He told us he'd eaten a huge breakfast and wasn't hungry so we ordered a Cheese frika with polenta. The food arrived with an extra plate as the waitress must have thought he was eating too. He decided to have some and remarked on the food being a bit bland. I was telepathically willing him to go and finally he left, seeing him finally walk off and leave us in peace was a wonderful moment. Sadly we didn't have time to relax now though as we had a festival to get back to. 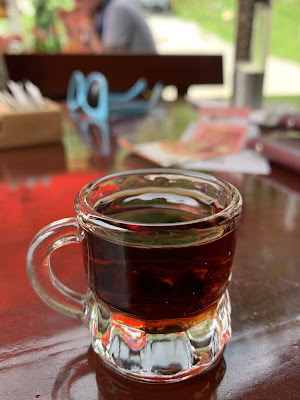 We paid the bill and necked the Jagermeister shot that came with it before heading back down to Tolmin. 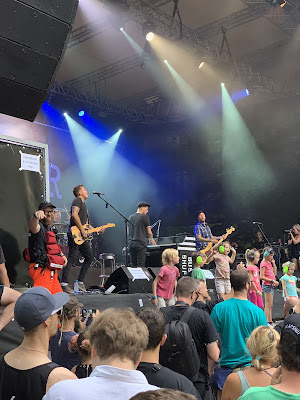 Londoners Buster Shuffle were first on the main stage tonight opening the night with a catchy ska/punk set. A great opening band that the kids at the front of the stage clearly enjoyed too. 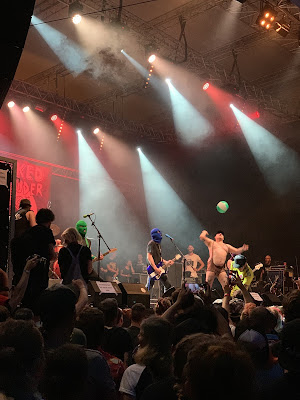 Masked Intruder from Wisconsin were next up, loved these guys! Their fast paced set went down a storm with a sea of beach balls being bounced above the crowd. 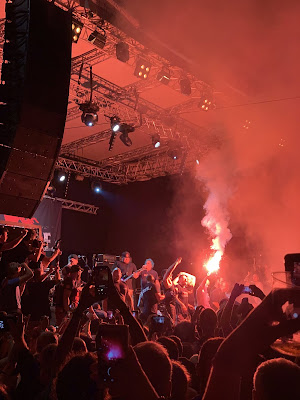 My second highlight of the festival had to be Pennywise, a totally mesmerising set and a band I've waited a long time to see. The crowd went nuts for these guys and red flares glowed from the crowd as they made their way towards the stage. 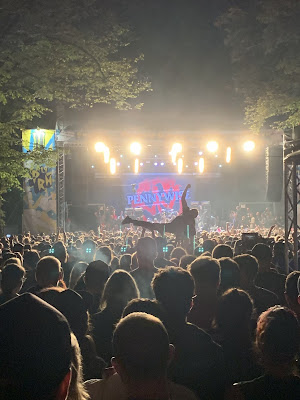 Although I prefer viewing close to the stage sometimes it's good to take a step back to see the entire event in full force, Pennywise were incredible! 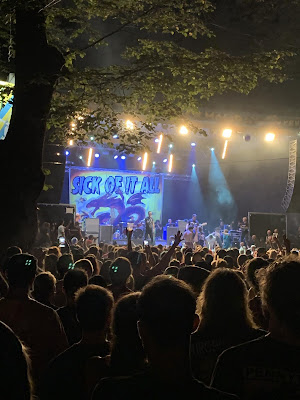 New York hardcore legends Sick of it all were next on stage. We were feeling so tired by now though so after a few songs we listened to the rest of their set on the walk back to the camp site. Was gutted to have also missed Less than Jake though who were on after these guys. We heard them from the camp site and they sounded amazing.

Click here for Day 6
Buffet breakfast and NOFX
Posted by Fry Up Inspector at 18:33