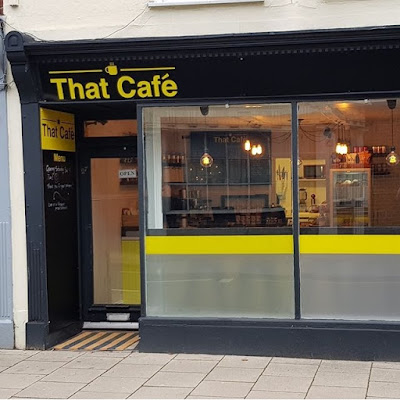 That Cafe opened on St Augustines Street earlier in the year. Since they added a full English breakfast to the menu it was only a matter of time before I visited to check it out. 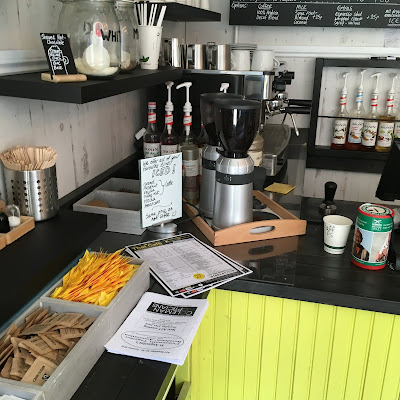 I was impressed to see them stocking biodegradable cups and cutlery for take away customers. 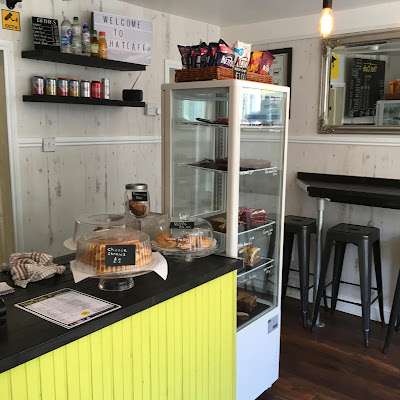 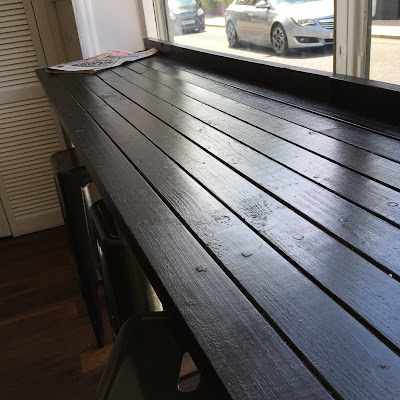 Instead of tables and chairs in the centre there are raised tables with stools to sit at, either at the window or on the far wall. 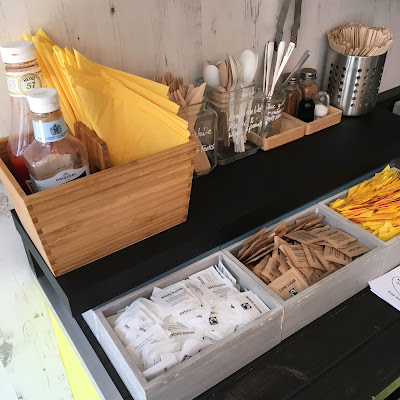 Help yourself to sugar, condiments and sauces. I was delighted to see Heinz ketchup and HP sauce stocked here. 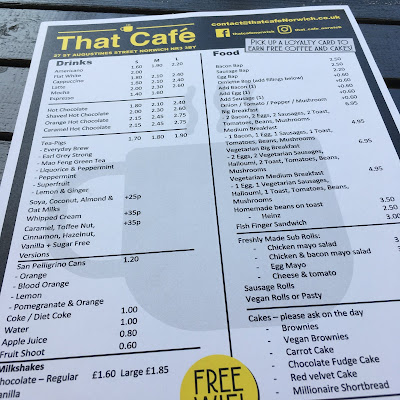 The menu offers a good selection of breakfasts which are served all day. 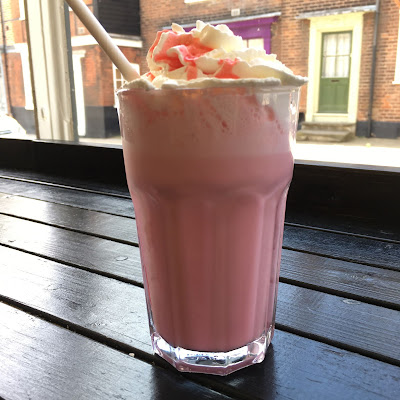 I tried one of their strawberry milkshakes made using Le sirop de Monin. It cost £2.20 with whipped cream and tasted amazing. 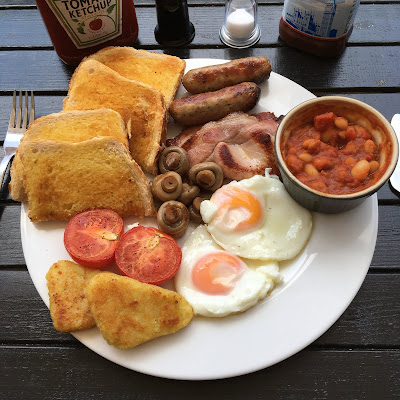 The large breakfast I was expecting to cost £6.95 ended up costing £7.95 as the menu I looked at hadn't been amended yet and the price had gone up. It was a decent size though and now featured hash browns, everything on the plate was served piping hot. 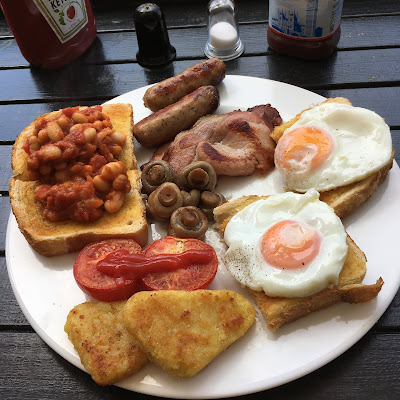 I reassembled everything where I wanted it on the plate and took a closer look at every item. And yes, I always put ketchup on my tomatoes! 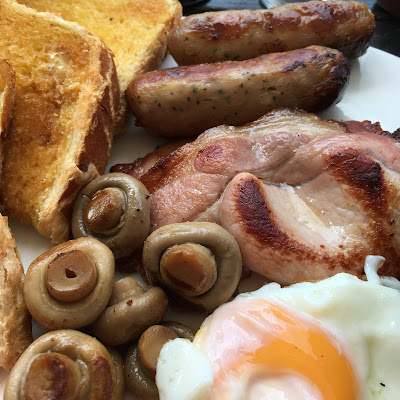 I really enjoyed the bacon but wasn't so keen on the sausages though. 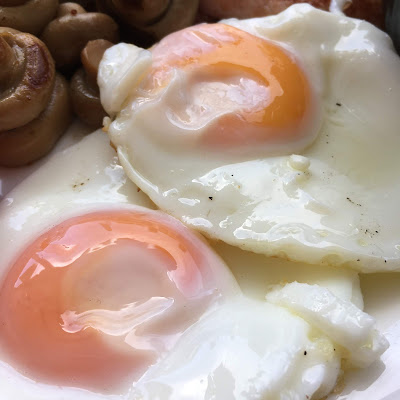 The eggs were in reasonable enough shape and the yolks were intact. 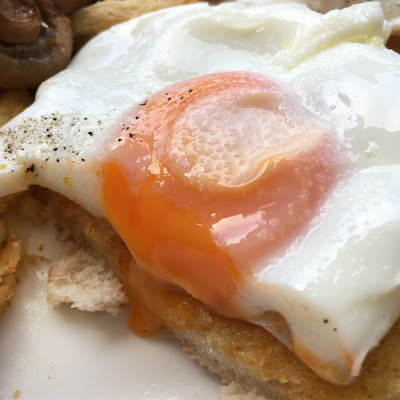 Yep, I was happy with that yolk flow. 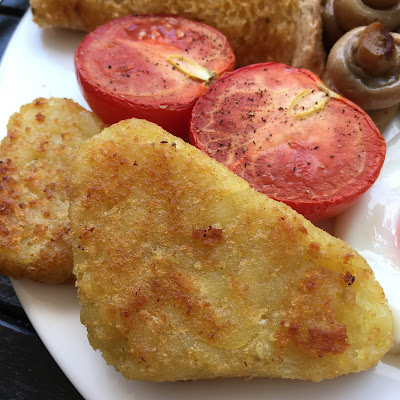 Fairly standard hash browns and delicious mushrooms. I overheard another customer asking for tinned tomatoes, I was slightly gutted as I love tinned tomatoes! 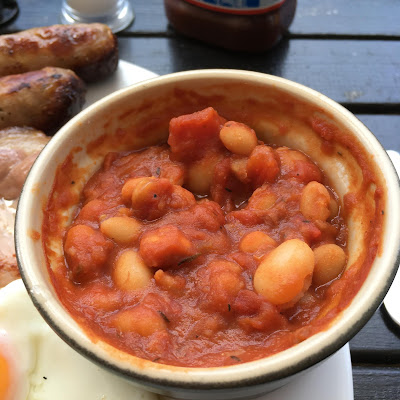 You can choose Heinz or homemade beans with your breakfast, I was feeling adventurous and asked for homemade. Made using cannellini and haricot beans, tomatoes, onion and seasoning, quite nice I thought. 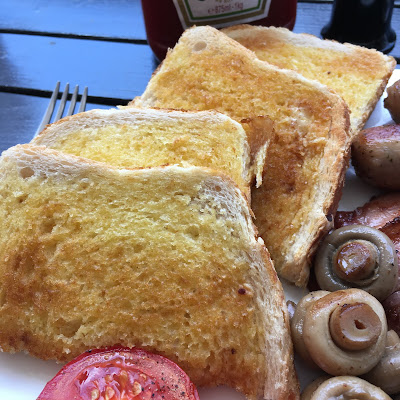 One of my favourite parts of the breakfast was the toast, cut from a really nice loaf.

I've always thought that St Augustines Street could do with a cafe so was quite delighted to see That Cafe open it's doors back in February. Initially they didn't appear to be serving a full English breakfast so I hadn't really considered going in. That changed though in April when I spotted them post a photo of a full English on their Instagram. Their initial offering was served half on a plate and half on a board which visually didn't excite me. Later in May though they appeared to be offering everything on the plate. That's more like it I thought, it was time to head to St Augustines Street and check this breakfast out...

Upon entering - For such a small premises it feels quite spacious inside. This has been achieved by having no tables and chairs on the central floorspace and instead having high stools to sit on at high tabletops around the edge. The tabletops are just the right height for the stools and seem to have plenty of space to enjoy a meal at. If you sit at the window you can people watch to your hearts content as I did. There's menus on and above the counter, this is where you place your order and pay at the end. Beside the counter is a selection of sauces, sugar and condiments, just help yourself to what you need. There was music on in the background at just the right level and newspapers on the side if you fancy a read. Oh and wifi, for me that's always a huge bonus these days as I can add to my instagram stories without using up all my data. I liked the branding, the colour scheme and the feel of this place. The seating situation at first glance concerned me slightly but having sat down and eaten I realised it worked well. I'm not sure it would work quite so well in accommodating a large group though. 7/10

Service - I was greeted with a smile and made to feel welcome instantly. I studied a menu and placed my order for a large breakfast and a strawberry milkshake. I was asked if I would like beans or homemade beans and offered whipped cream on my milkshake. As I sipped on my milkshake I could hear some great teamwork going on in the kitchen, this clearly paid off as when the food arrived everything looked nicely cooked and was piping hot. On my way out I went to settle my bill at the counter which came to £10.15, this was £1 more than I was expecting to pay. It turned out the large breakfast had gone up by £1 as it now included hash browns. The menu I'd been looking at hadn't been amended yet though hence the confusion. Anyway, despite the confusion at the till the service here is good. 7/10

Presentation - I was quite impressed when the breakfast arrived, it filled a large white plate and the beans were served in a separate pot. The eggs were in fairly good shape and everything looked nicely browned. 7/10

The food - I really enjoyed the bacon, nicely browned thick rashers. I wasn't so fussed about the sausages though, they were nice enough with a herby flavour and firm texture but I do prefer a slightly better quality sausage to be honest. The hash browns and tomatoes were fairly standard, I just wish I'd been more on the ball and remembered they served tinned tomatoes here as I much prefer them to fresh. The homemade beans some might find slightly too rich on a full English, I really enjoyed them over some toast though. The toast itself was incredible, thick sliced from a quality loaf and evenly buttered, the ideal base for the fried eggs, both of which had nice runny yolks. Finally the mushrooms, beautifully cooked! So a good breakfast which I enjoyed, for me the stand out items were the bacon and the toast. 7/10

Value for money - £7.95 seemed like a reasonable price for this breakfast. It was a decent size and tasted good. 7/10

Veggie option - Yes, two sizes available.
Overall - A great little cafe making a good effort to use biodegradable products and serve the St Augustines Street community. There's a varied breakfast menu on offer here and some pretty impressive looking cakes and delicious shakes too. The service was friendly and the cafe environment very pleasant. The owner Chris has now added a mega breakfast to the menu too and seems keen to listen to what his customers want. Definitely worth a look, go check it out for yourself! 7/10