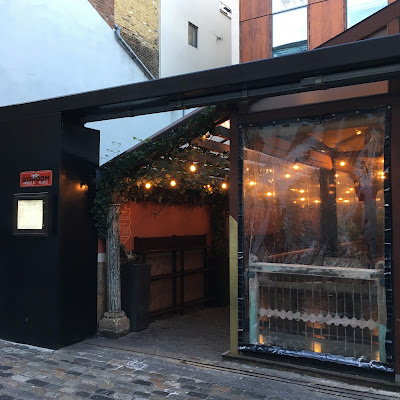 You may well spot Dishoom on Shoreditch High Street but the entrance is found on Boundary Street which runs parallel. 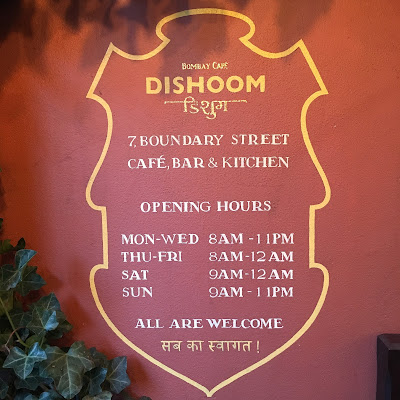 We were mindful that Dishoom is very popular and can get very busy so we booked a table online in advance. 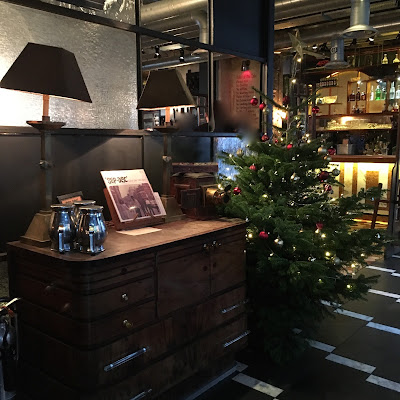 Admire the Christmas tree whilst waiting to be seated. 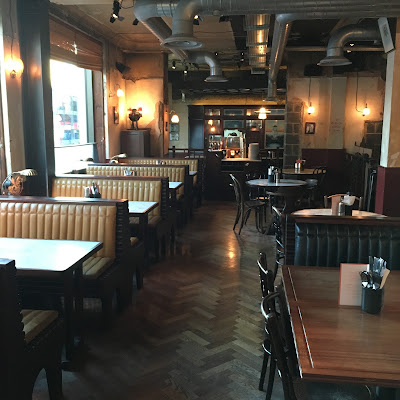 It was almost empty when we arrived but by the time we left it was packed. 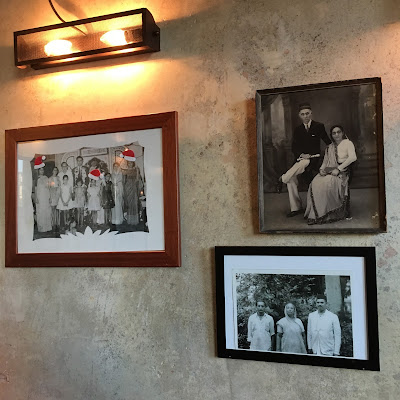 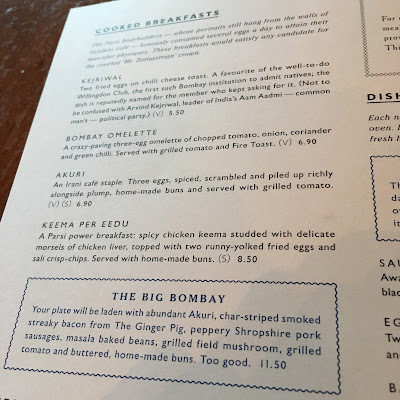 The bacon naan roll was highly recommended but I wanted to taste more things so ordered The Big Bombay with a big price tag of £11.50. 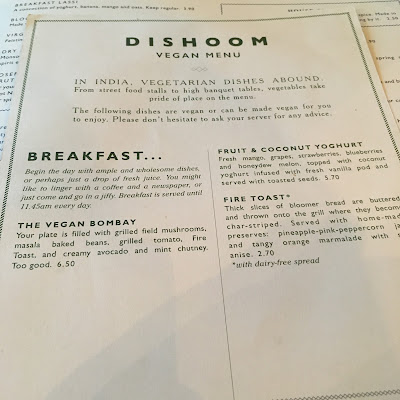 Through researching online my wife had discovered they also offer a vegan breakfast menu. 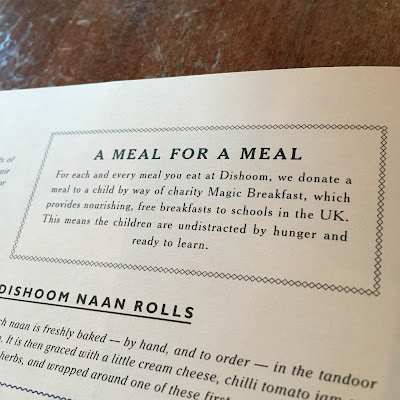 This was a really nice gesture! 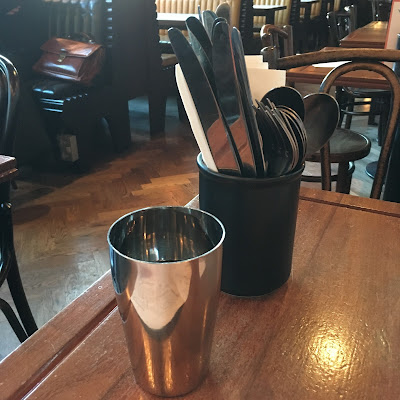 Cutlery is already on the table and water is served once you're seated. 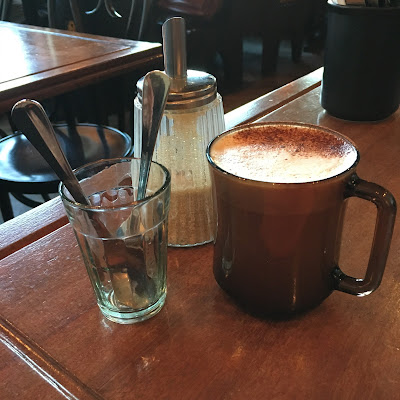 A cappuccino here cost  £2.70, a vegan version is available too which pleased my wife. 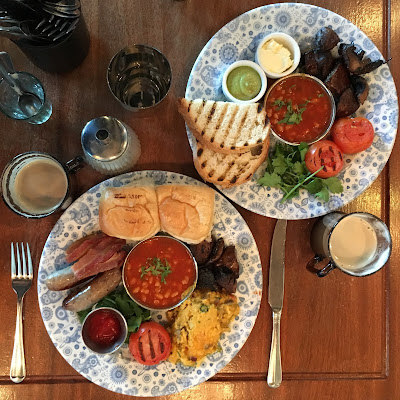 When the food arrived we were delighted at first glance, the food was nicely presented on beautiful plates and the portions seemed quite generous. 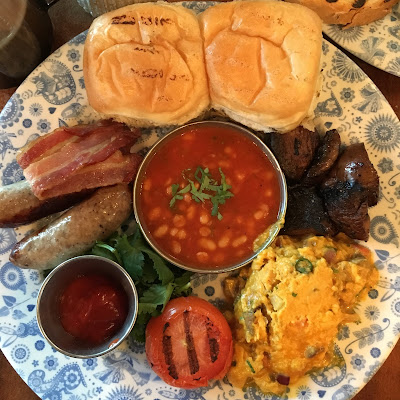 This is the Big Bombay breakfast which cost a whopping £11.50. A full English breakfast with an Indian inspired twist. 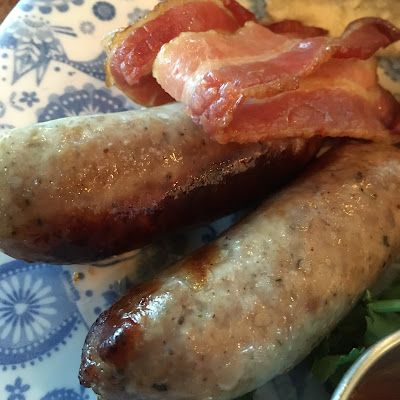 The streaky bacon was from Ginger Pig but I wasn't particularly impressed, I'd tasted far better streaky bacon at Olives in Norwich. The peppery Shropshire pork sausages were looking very pale on one side, more time needed in the pan was my initial thought. 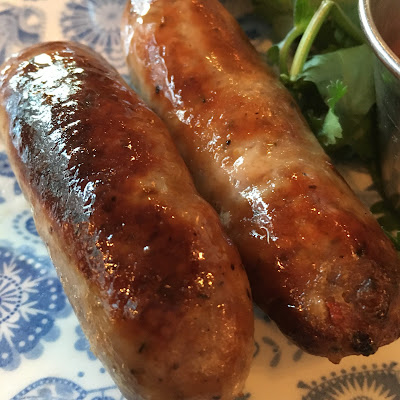 They were browned the other side though and were most certainly a stunning tasting sausage. 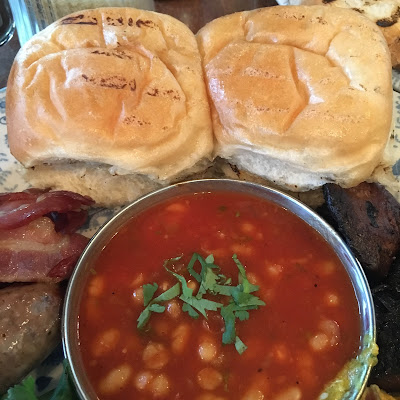 I didn't understand why a pair of bread rolls is served on this breakfast at all, I felt like I'd been invited to a friend's BBQ. The Masala beans tasted like normal beans to me, I only noticed they were Masala beans whilst writing this. 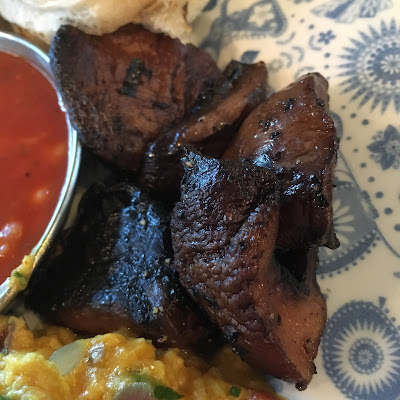 The mushrooms were sublime! 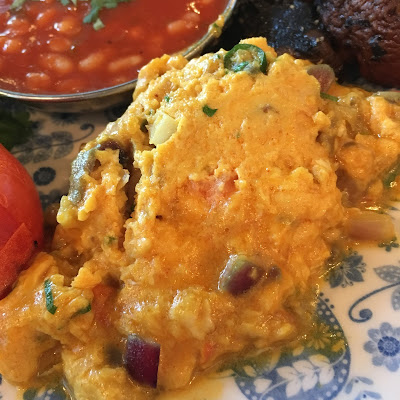 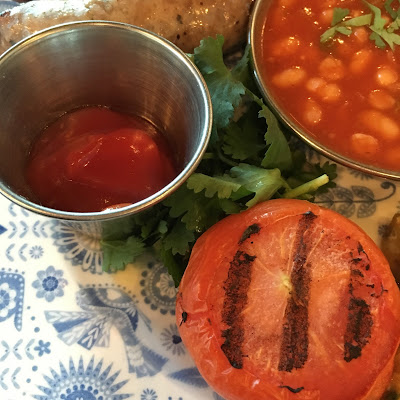 The tomato tasted of nothing at all so I covered it in this tiny portion of ketchup to achieve a tomato taste. 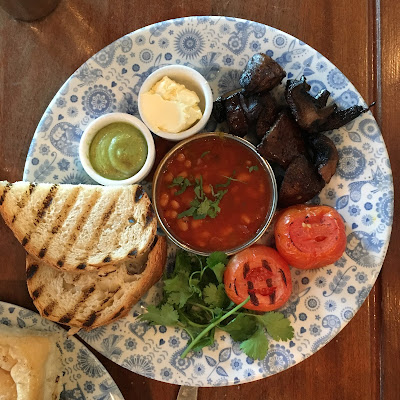 My wife's vegan breakfast lacked imagination but was far more reasonably priced at £6.50.


I was fast running out of ideas of where to review next in London so I asked on my Facebook page. Many suggestions were put forward but the place most people suggested was Dishoom. We were up and out of the house by 5.45am and walked to Norwich train station in sub zero temperatures in order to catch the 6.30am train to Liverpool Street. Once there we had 40 minutes to kill so we checked out a hardware store and Tesco Metro on Shoreditch High Street purely to escape the icy winds outside. At 9am Dishoom finally opened so we went in search of the entrance on Boundary Street...

Upon Entering - It's a huge restaurant with many tables on the ground floor where there's also a bar. Head downstairs where there's further seating, the kitchen and toilets. We'd reserved a table as we had heard it can get very busy, the place was empty when we first arrived but rapidly filled up. Humorous rules of the cafe and photos from Bombay adorn the raw concrete walls and the floor is a mix of parquet and decorative tiles. Overhead it looks quite industrial with large silver piping and the the tables and chairs are quite traditional. Cutlery is already on the table, a menu is brought over when you're shown to your table and there's no condiments on the table. 7/10

Service - As we walked along the alleyway towards the door we were greeted with a smile by a member of staff doing some cleaning. Once inside we confirmed our booking at the front desk and were shown to our table and handed menus. As we opened the menu we were asked about drinks straight away, I do love efficiency but this felt slightly too rushed as I struggled to find the drinks section with somebody hovering overhead. From the menu I decided to order the Big Bombay breakfast, my wife was struggling to find the vegan option she'd seen online though. She enquired about this and It turned out there was a separate vegan menu which was then brought over. The food order was taken by a different member of staff to the one taking our drinks order. The drinks arrived and a constant flow of staff were then parading up and down the centre isle of the room keen to take orders. There didn't appear to be a particular person allocated to a table and by now we'd been served by three different members of staff and that increased to four as our food was brought over to us. After eating we were told we could settle our bill at the till, I'm guessing they were keen to use our table for other customers. At the till we noticed an optional 12.5% service charge had been added to the bill. We'd felt quite rushed so our table could be freed up again and decided not to pay it, the lady taking the card payment was clearly not happy about this though as her smile turned into a frown. One other thing I noticed was that there's no salt and pepper on the table and it wasn't offered during the meal. 4/10

Presentation - At first glance I was quite impressed with the layout of the items and loved the choice of plate, the mushrooms did look amazing. As I looked closer though I noticed the sausages were only browned on one side, the tomato looked hardly cooked at all and the beans were holding way too much juice. The buns looked really out of place though and appeared to have been popped on the grill for a few seconds. I wasn't keen on the metal pots that the beans and ketchup came in either. 5/10

The food - The plate hadn't been pre-warmed so although the food arrived fairly hot it did turn lukewarm really quickly. The sausages were a peppery Shropshire pork variety and they were an impressive banger for sure, heaps of flavour and a nice firm texture. The Ginger Pig streaky bacon sounded impressive but in reality the tiny rashers could have been far crispier and left me feeling a bit disappointed. The tomato was well undercooked, had no flavour and caused a bit of a flood crisis on the plate. I ended up covering it in the ketchup to achieve a tomato flavour. The Masala beans tasted like standard beans to me in far too much juice, I only reallised they were supposed to be masala beans when writing this. I really didn't understand the pair of homemade buns being on this breakfast. They tasted ok and I ended up wrapping them around the meats but surely a naan bread or some toast would have been a better option. On a more positive note the Akuri (spiced scrambled egg) was excellent, mildly spicy with a good texture and containing small chunks of onions, tomatoes and green chillies. Finally the mushrooms, they don't get much better than this, sublime! So disappointing in places but also a few items that really impressed. 6/10

Value for money - I paid £11.50 for the Big Bombay breakfast and £2.70 for a cappuccino, so a total spend of £14.20. I expected a breakfast with this price tag to be excellent throughout but with a few unimpressive items on the plate it felt over priced to me, even in London. Also remember the service charge, had I paid it then the total price would have increased to £15.97. 4/10

Veggie/vegan option - There's a couple of veggie options on the main breakfast menu and a vegan Bombay can be found on the vegan menu. My wife ordered the vegan Bombay which cost a far more reasonable £6.50 and contained mushrooms, masala beans, tomato, toast, avocado and mint chutney. My wife thought it was a reasonable price but lacked imagination.

Overall - With so many people recommending Dishoom my expectations were high, possibly too high. Sadly disappointment soon set in though with the rushed service, undercooked items and unexpected service charge. All these issues tend to crop up at chains and here there was a strong feeling that taking the money was a strong priority over the actual customer experience. Good in places for sure but the experience felt overpriced and far too rushed to me. 5.5/10