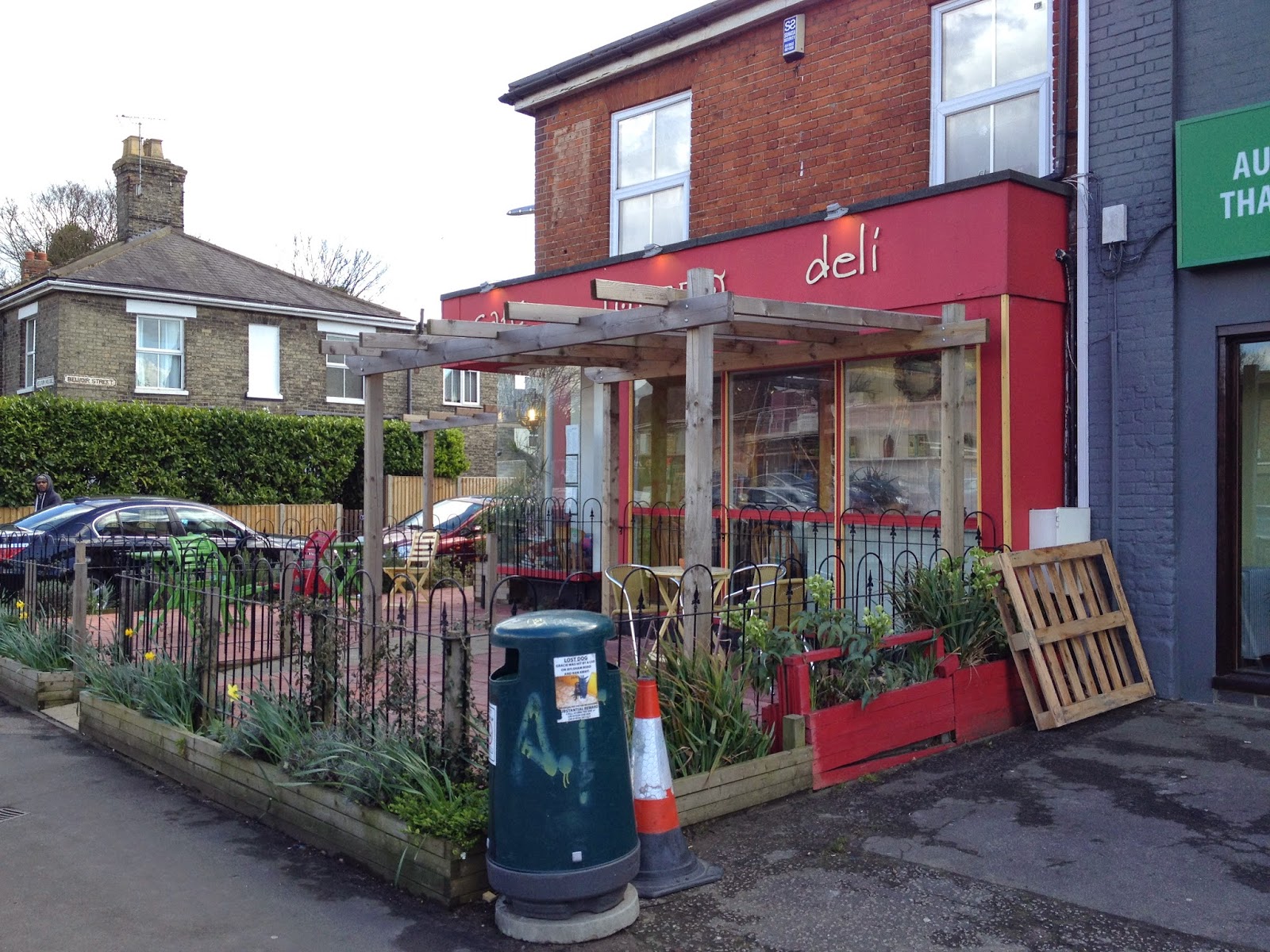 Cafe Torero can be found on Dereham Road, on the corner of Belvoir Street. 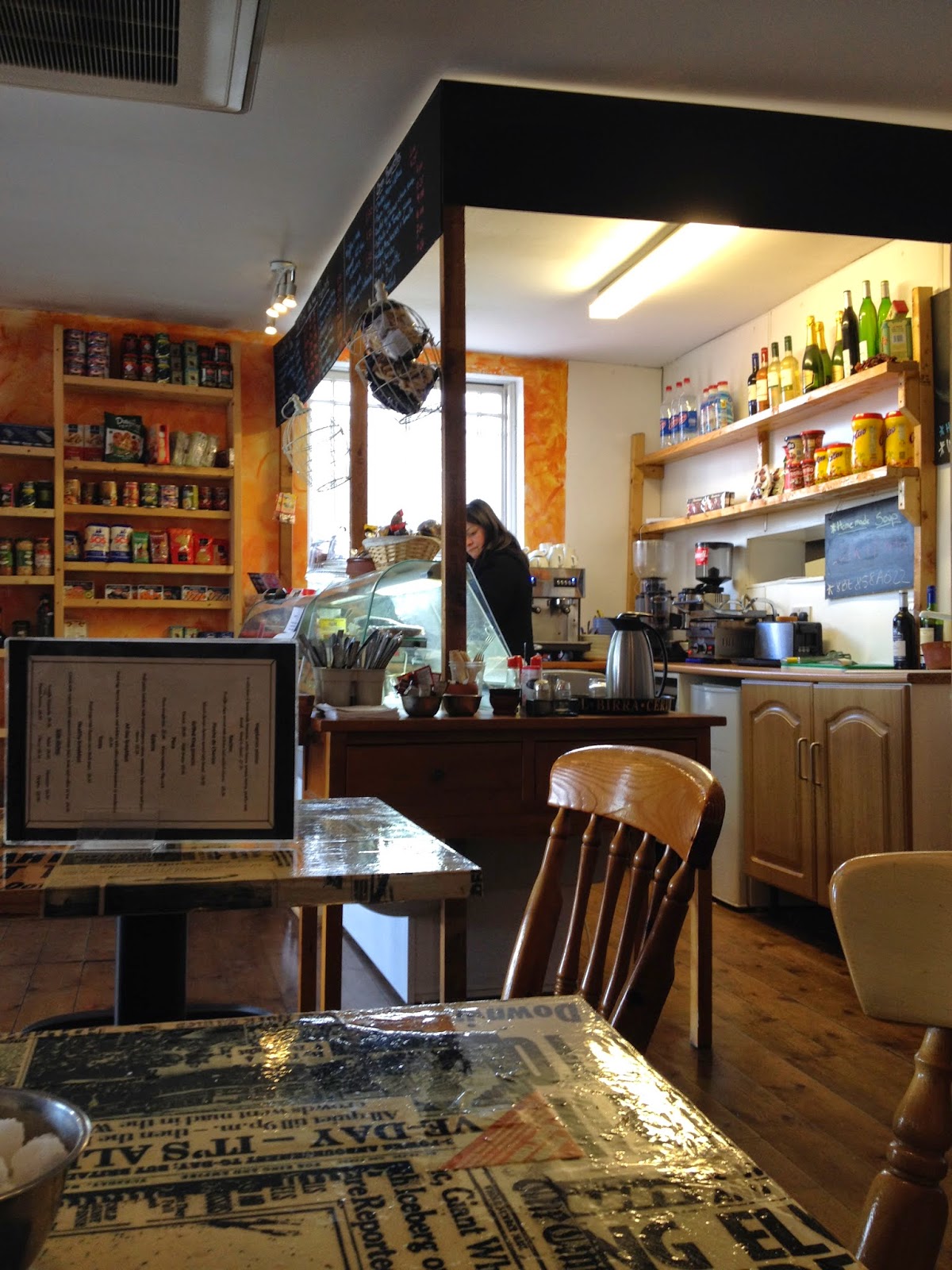 Remember to collect your cutlery and sauces from the table beside the counter or you will be returning for it once the food has arrived. 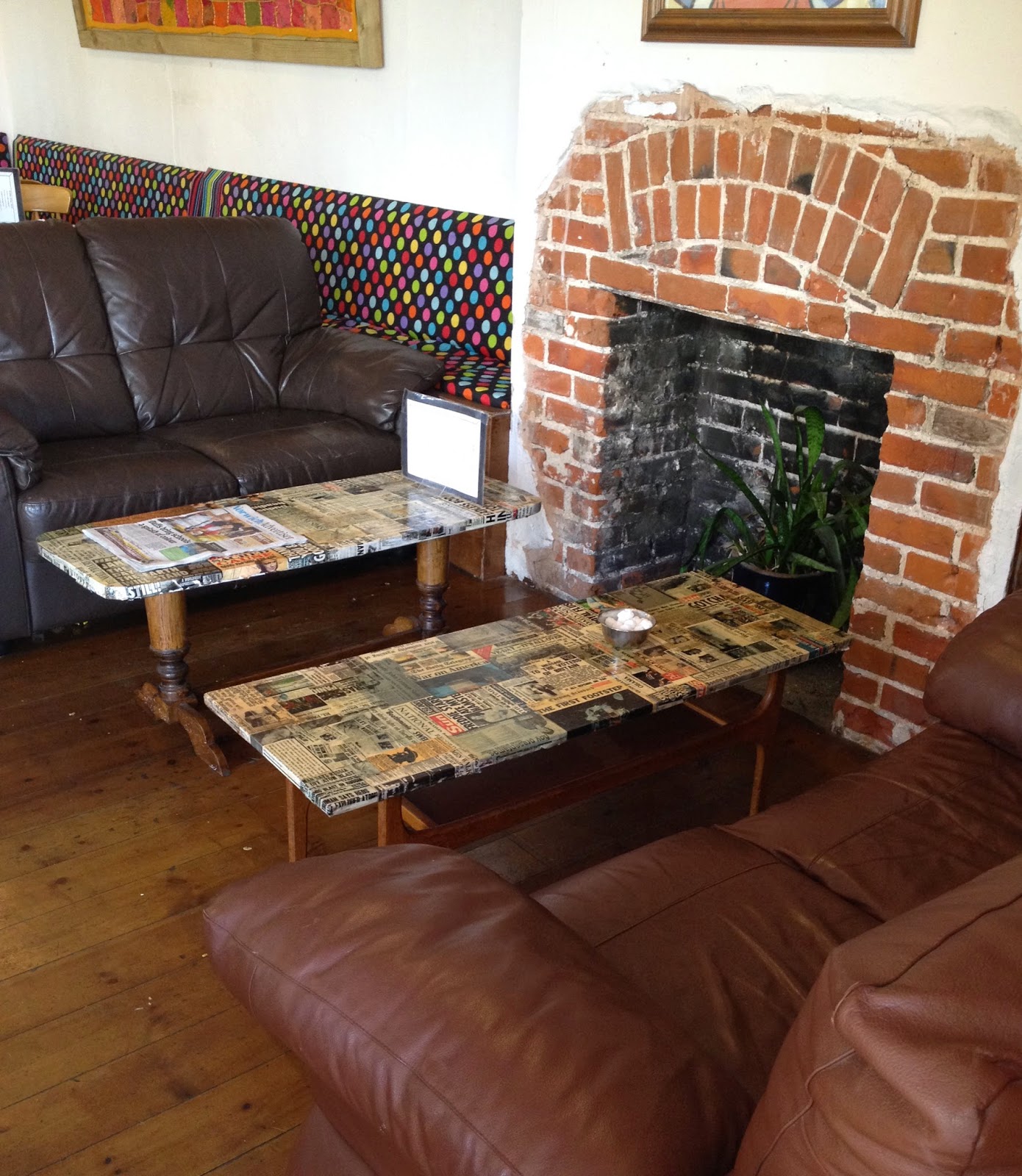 There are sofa's if you want to get really comfy with your coffee. 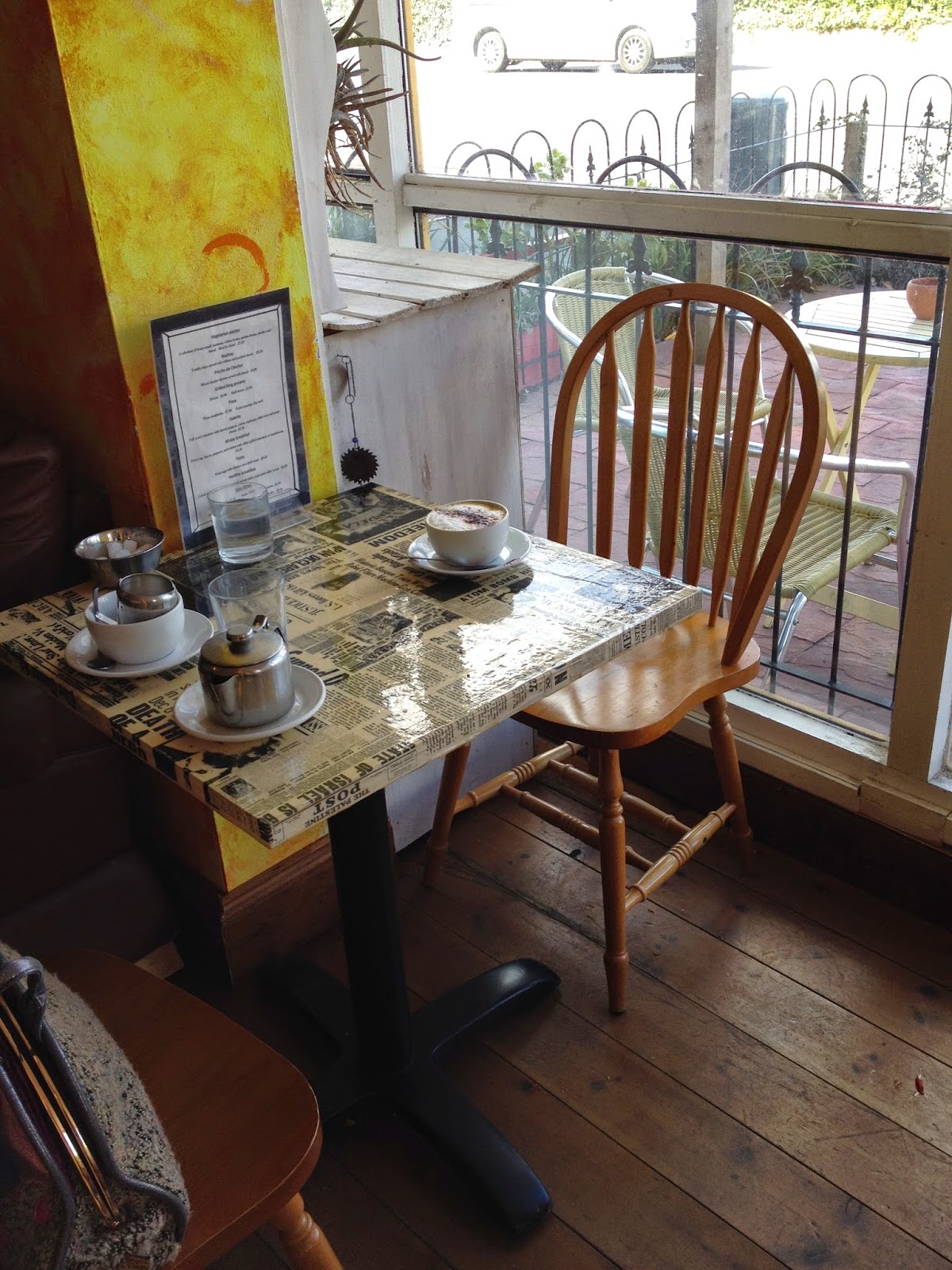 We chose a table by the window. 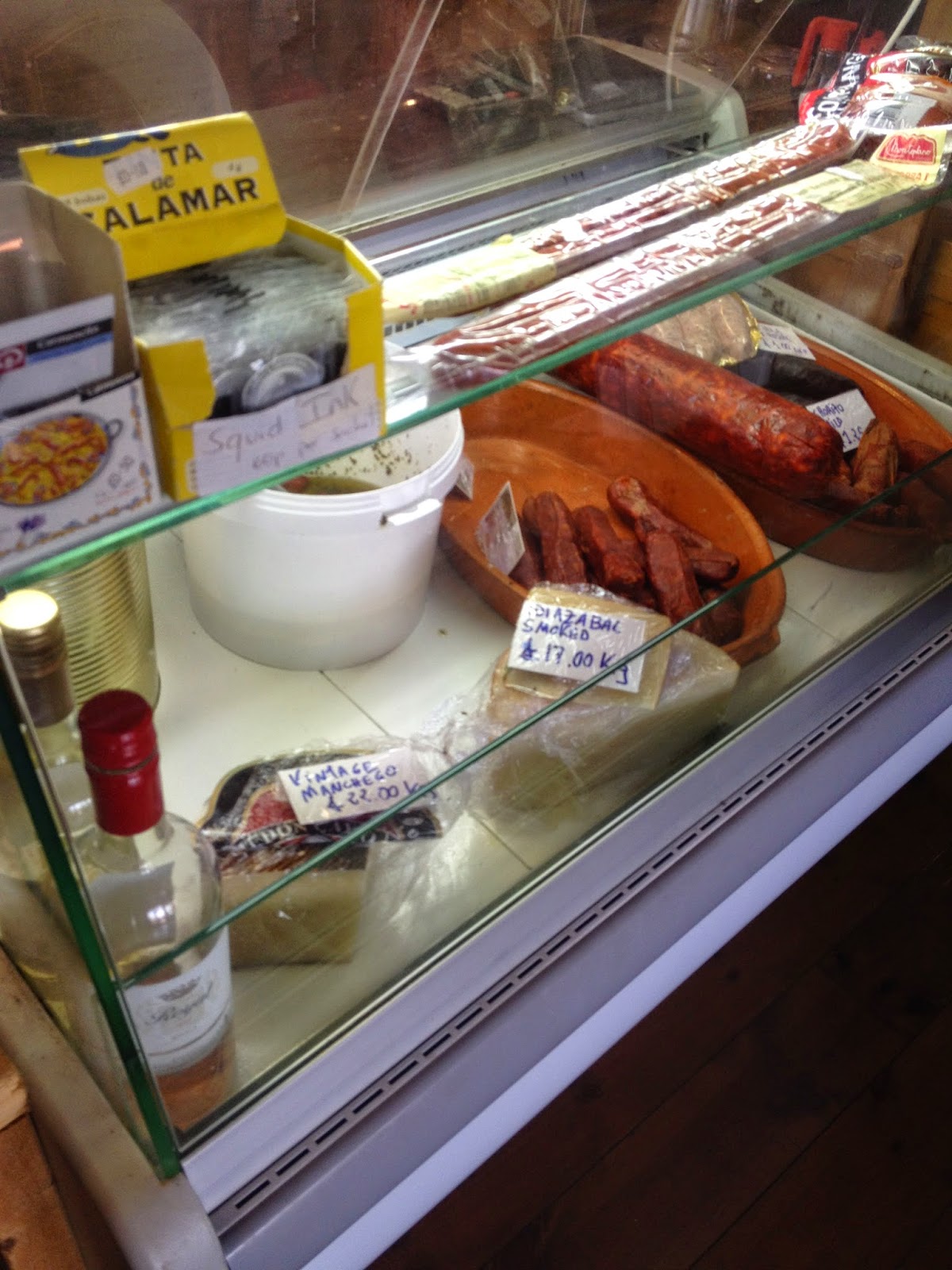 A small range of deli items are available to buy at the counter. 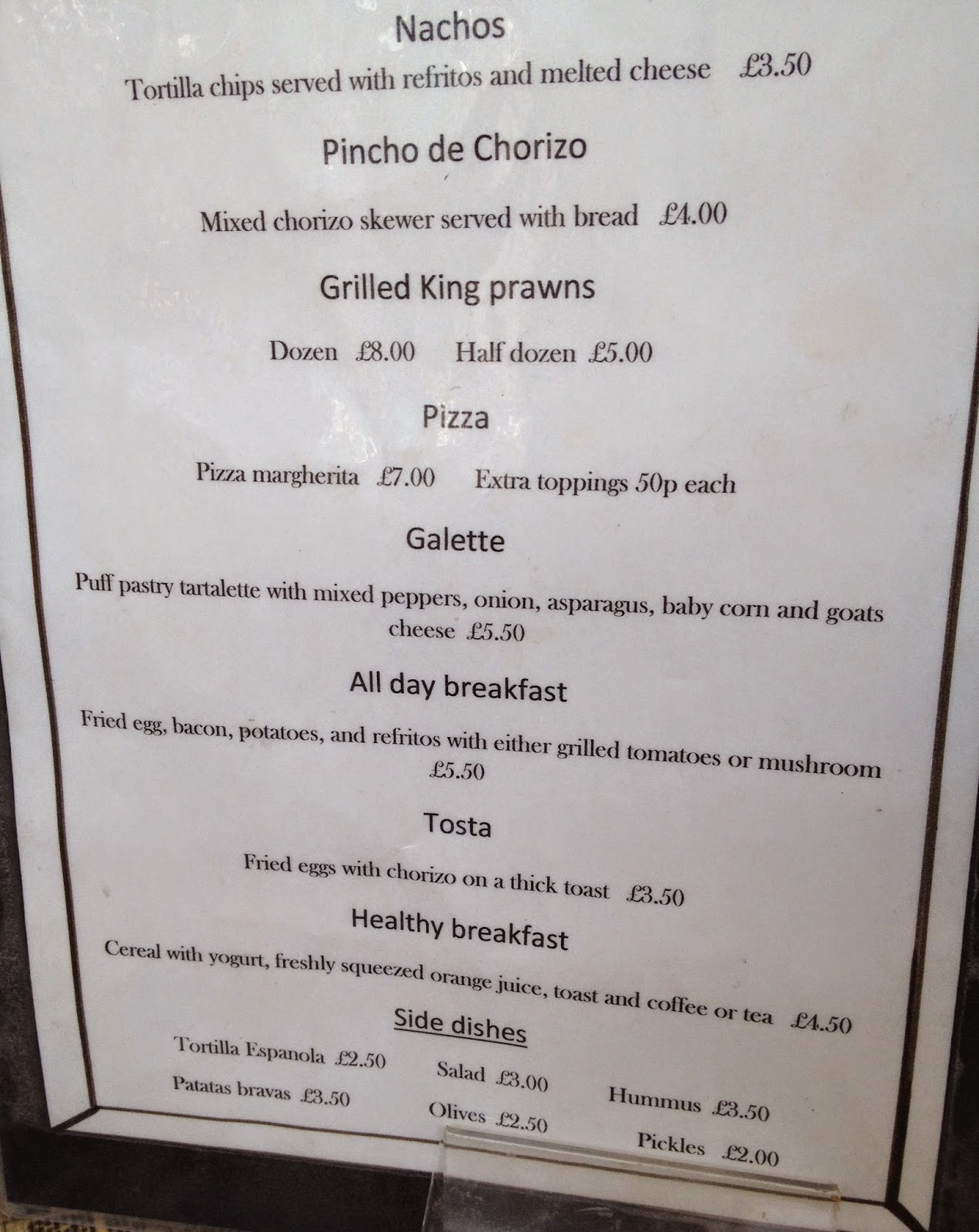 An all day breakfast was what lured me inside. 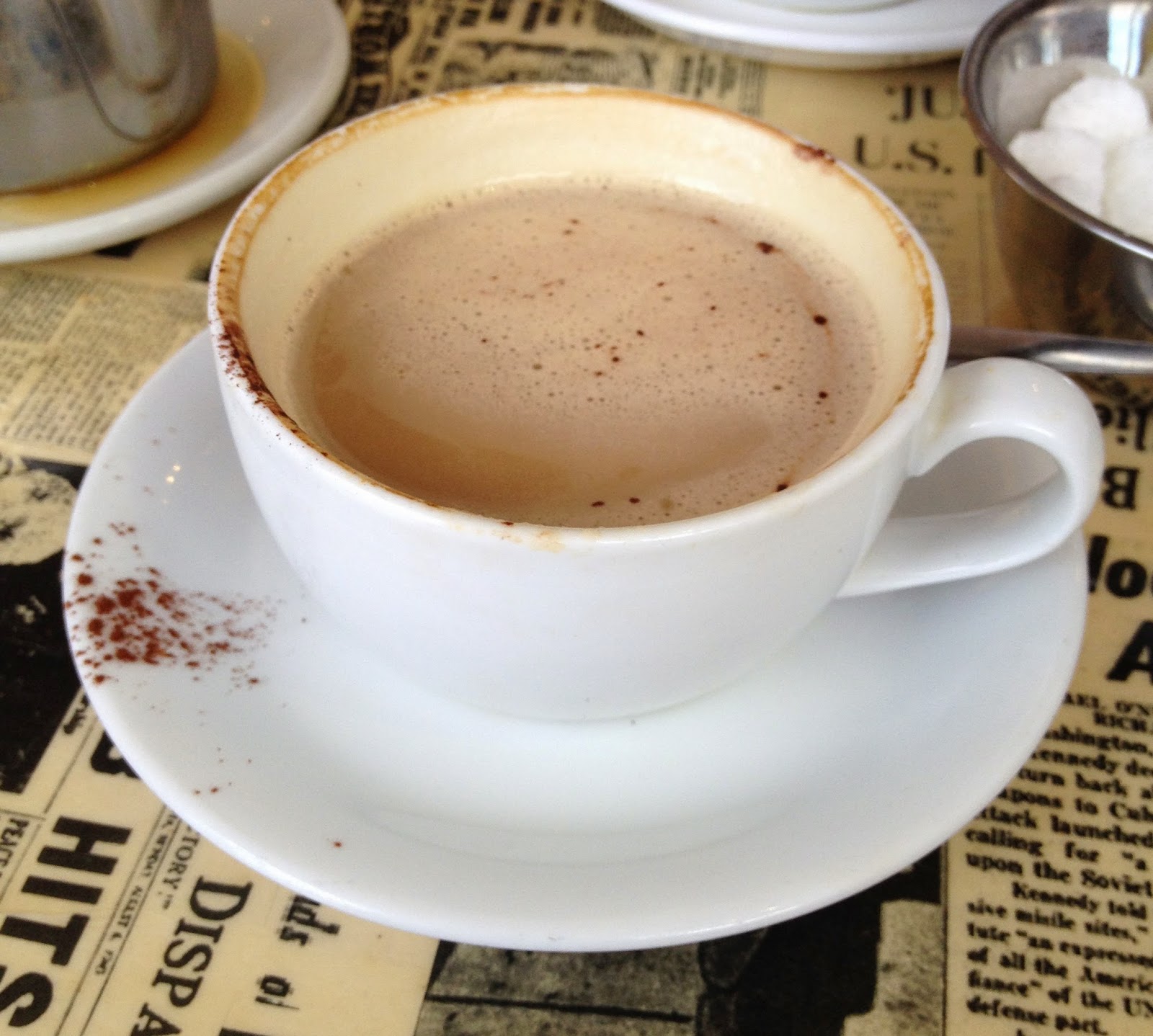 The cappuccino here was nice, I almost forgot to take a photo but remembered after sipping the froth. 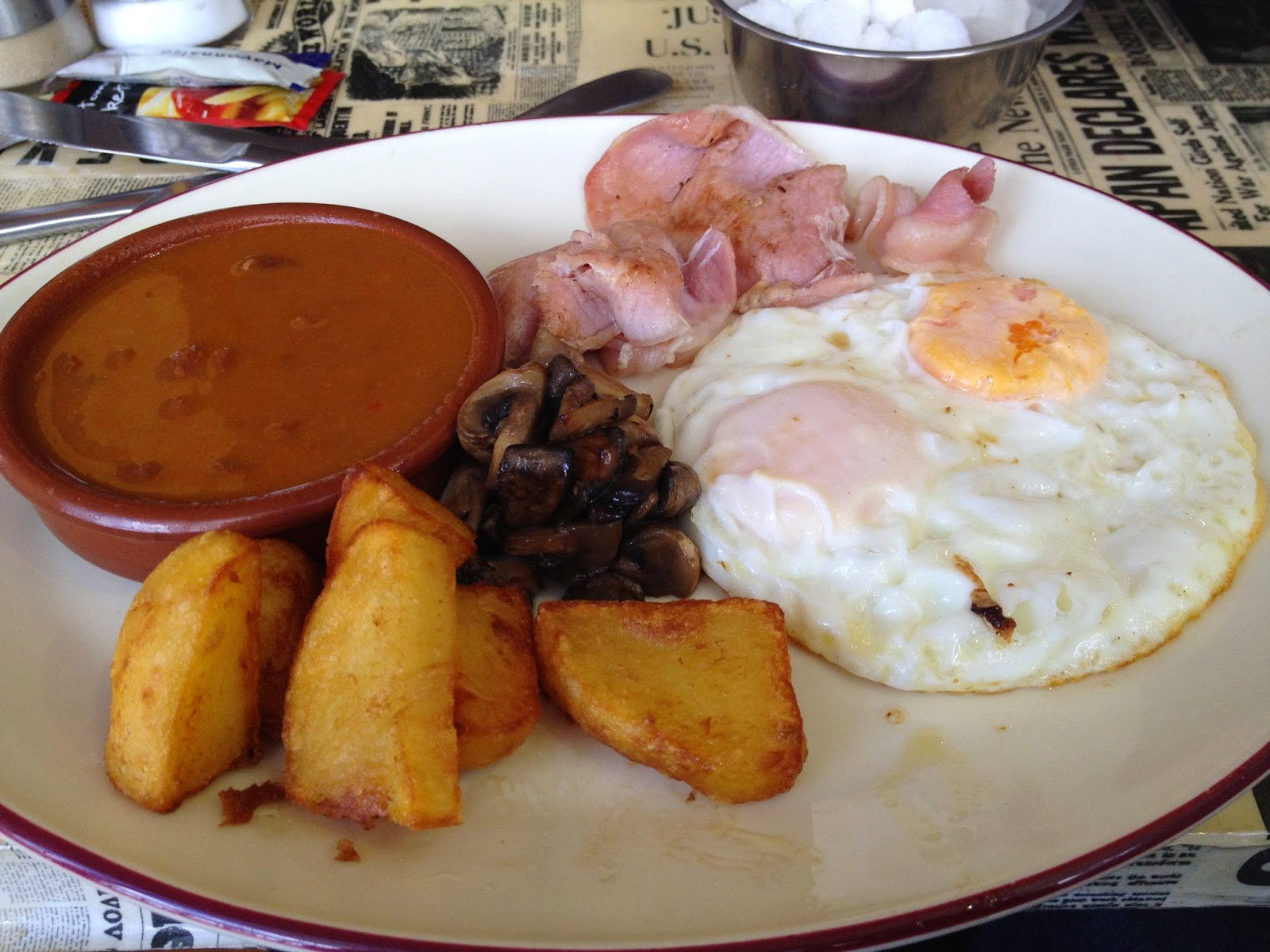 Visually it looked a bit disappointing, perhaps it tasted really nice though? 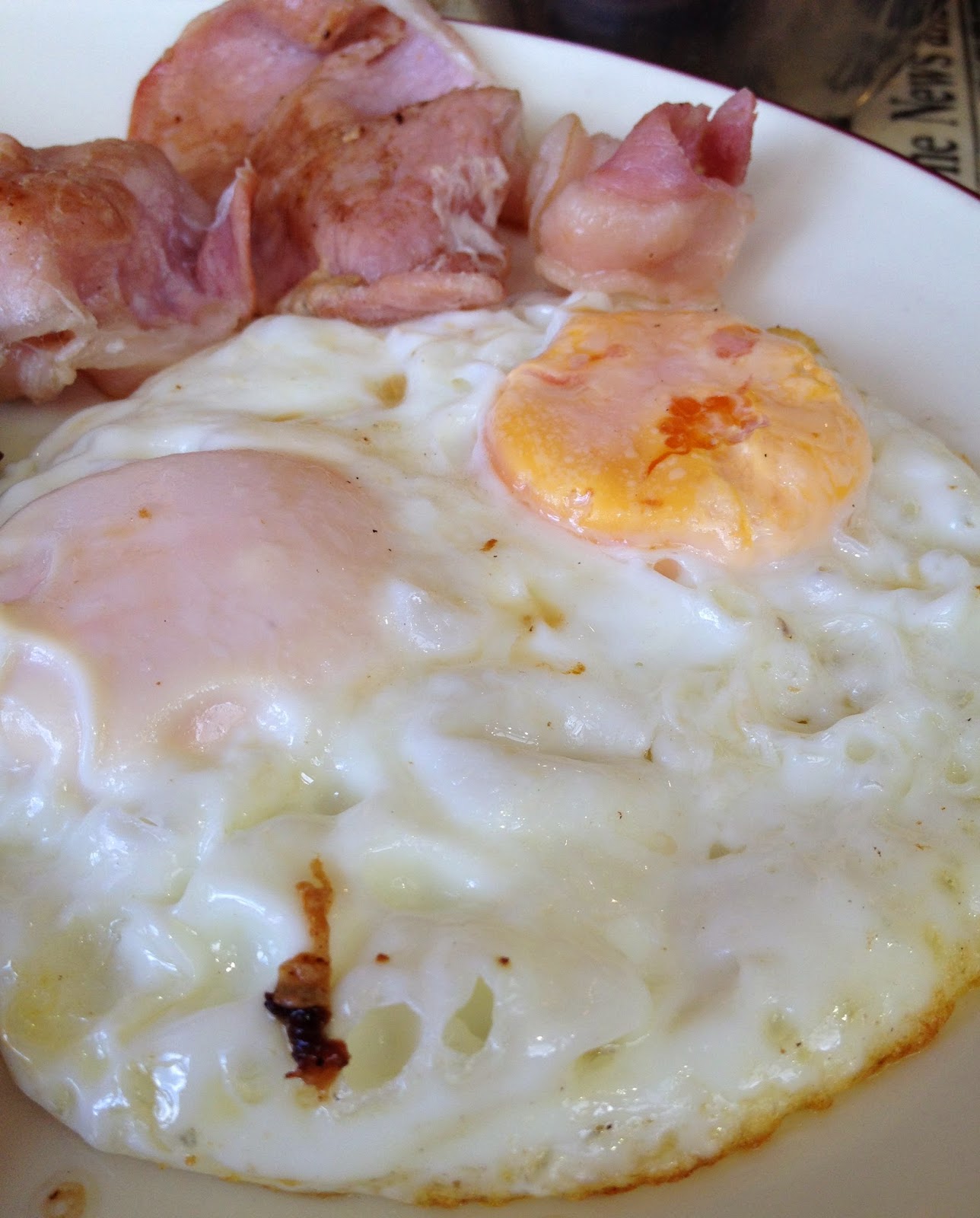 The eggs tasted better than they looked but the bacon needed more time in the pan. 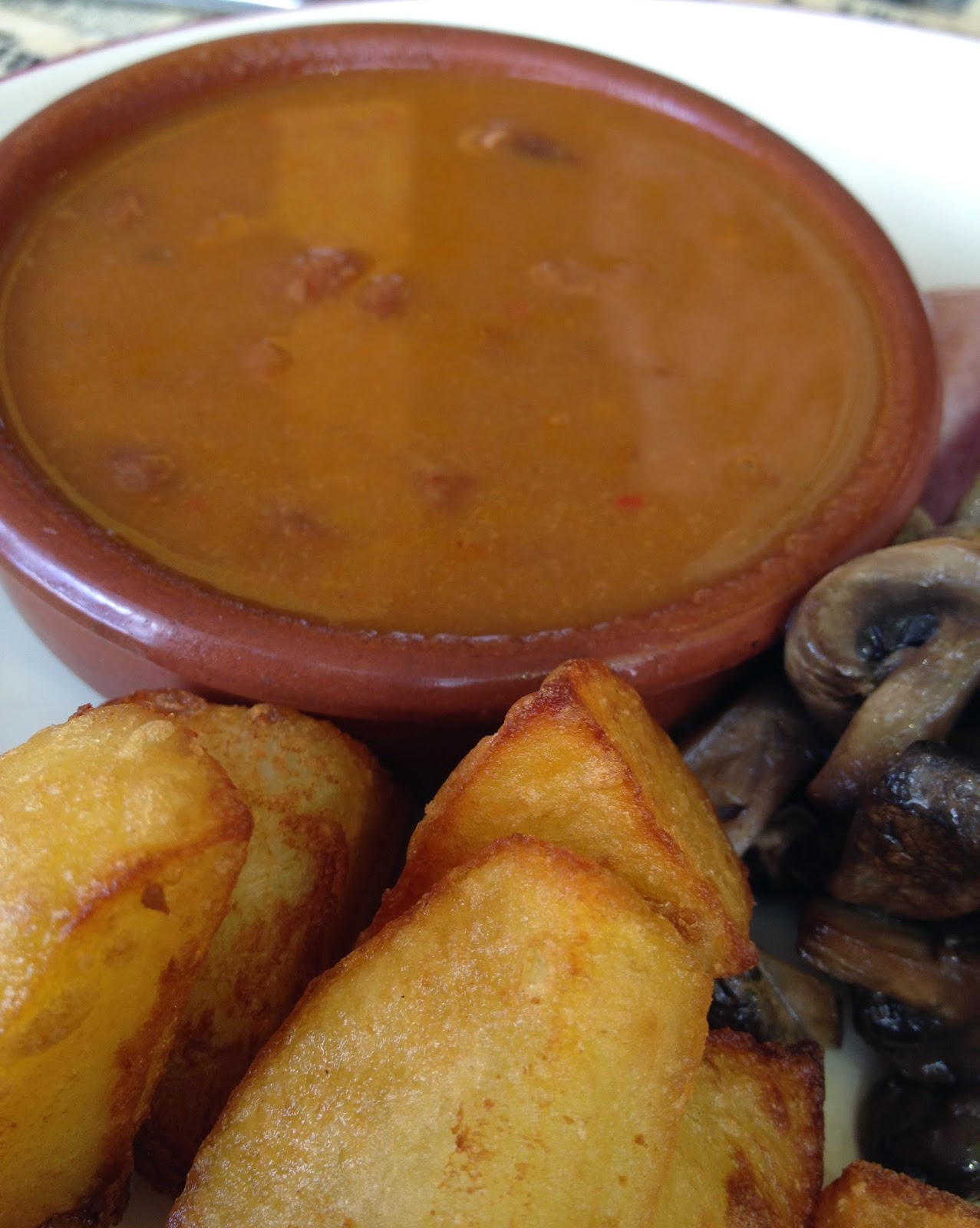 Refritos was served lukewarm and in way too much liquid but the potatoes were very nice. 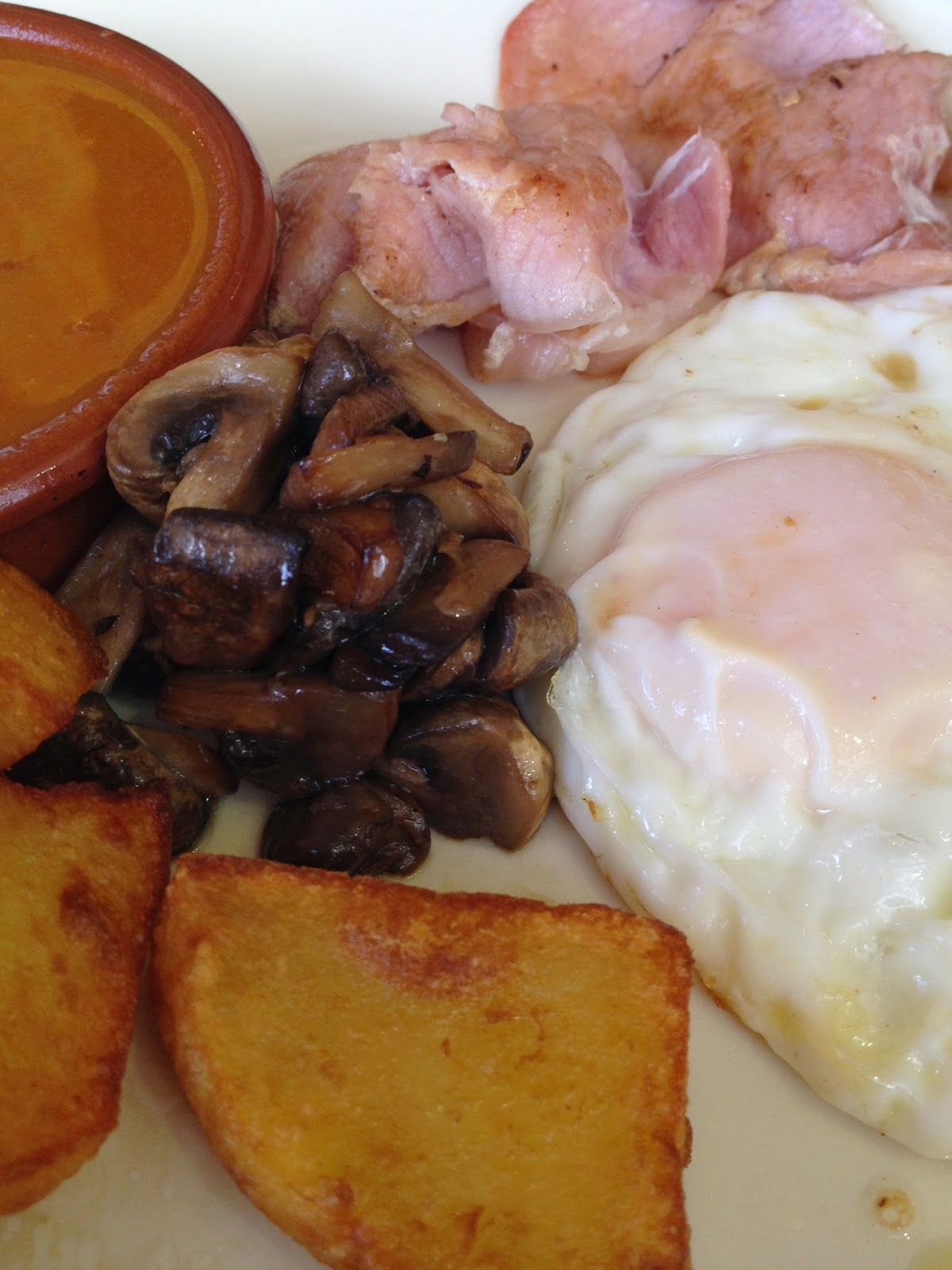 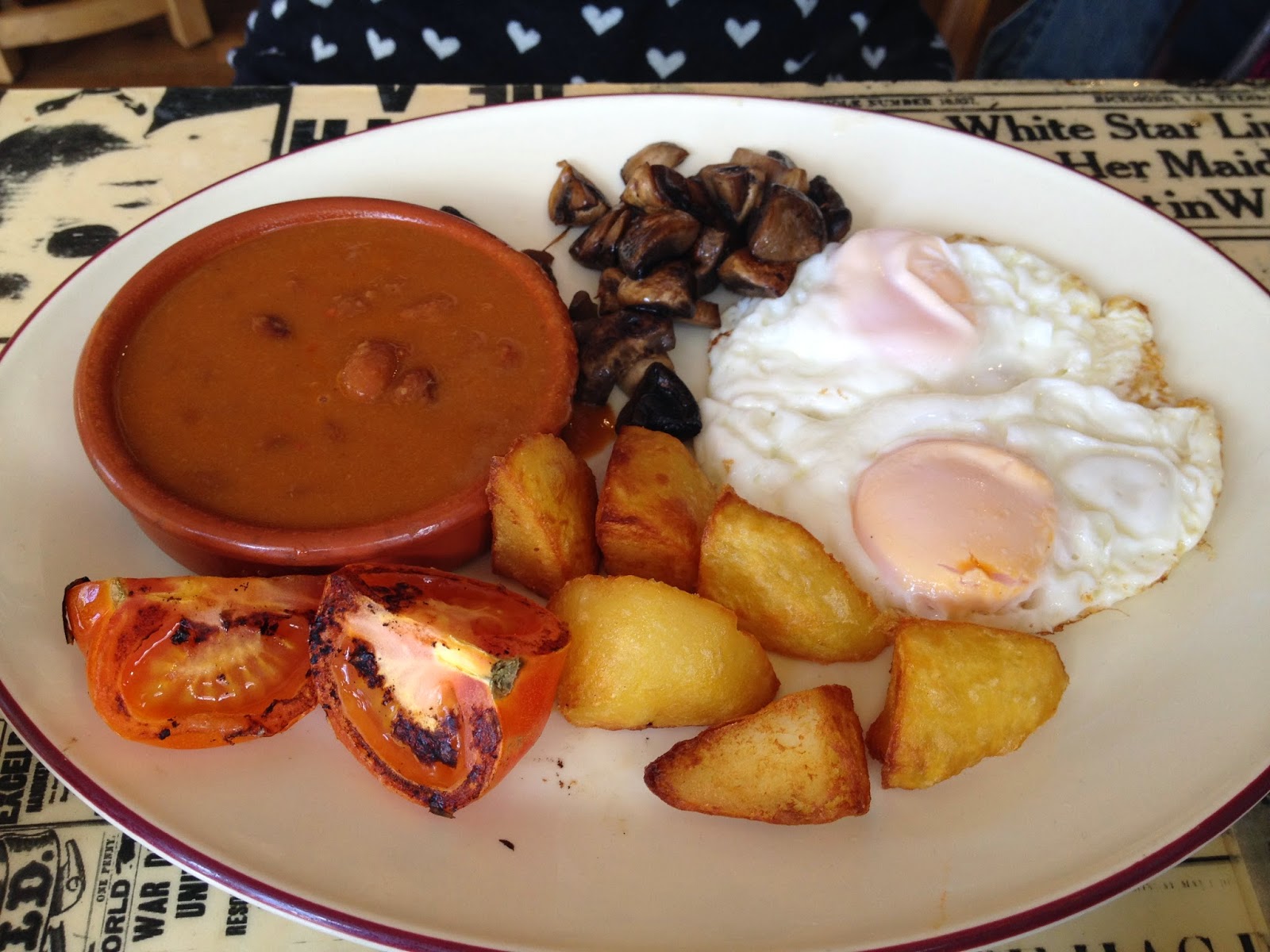 The vegetarian option was to have tomatoes and mushrooms instead of bacon.

We were walking along Dereham Road on a visit to Pye Bakers when Cafe Torero caught our eye, we were feeling hungry and noticed they served an all day breakfast for just over £5. The next thing we knew we were placing our order, this was the most spontaneous inspection I can remember!

Upon entering - I hadn't been inside this premises since it was a car audio shop quite a few years ago now. The outside seating area was tempting but it was a bit breezy so we headed inside, it seemed nice enough with a number of tables and a couple of sofas to sit at. There's a counter where you place your order and pay, some deli items are available to buy here too. Cutlery and sauce sachets are found on a table by the counter, drinks and food are brought over when they are ready. As a place to eat it seemed ok, probably much nicer in the warmer weather though when you can sit outside on the terrace. 6/10

Service - The lady serving us was reasonably friendly,  my wife asked about a veggie option and was told she could have mushrooms and tomatoes instead of bacon. The food arrived without cutlery and we were told it was by the counter. 5/10
Contents - 2 bacon, 2 fried eggs, potatoes, refritos and mushrooms or tomatoes. 4/10

Presentation - I felt quite depressed when the breakfast arrived and can't say I was very excited about eating it. Undercooked bacon, an odd looking egg yolk and a bowl of liquid were the low point. The mushrooms looked ok and the potatoes looked quite promising. 4/10

The food - The undercooked bacon tasted ok and despite my initial concern over the eggs they tasted quite nice. I was looking forward to refritos but was disappointed to be served a lukewarm bowl of liquid containing a few stray beans, certainly not the consistency or temperature I was hoping for. The mushrooms were quite nice and the highlight was the delicious and golden crispy potatoes. 5/10

Value for money - The breakfast cost £5.50 which initially seems quite cheap, it desperately needed some toast though and before long we were hungry again. You are given the choice of mushrooms or tomatoes, both would have been nice though. 5/10

Veggie option - Not a specific vegetarian breakfast but you could have mushrooms and tomatoes instead of bacon.

Overall - With it being a Spanish cafe I wasn't really concerned about there being no sausage on this breakfast, instead I was really looking forward to refritos but sadly it was the most disappointing part of it. The environment seemed quite nice and the service was at best ok. The breakfast just felt a bit lifeless and depressing though, I can recall making a much better breakfast myself with a terrible hangover in the back of my camper van. 5/10