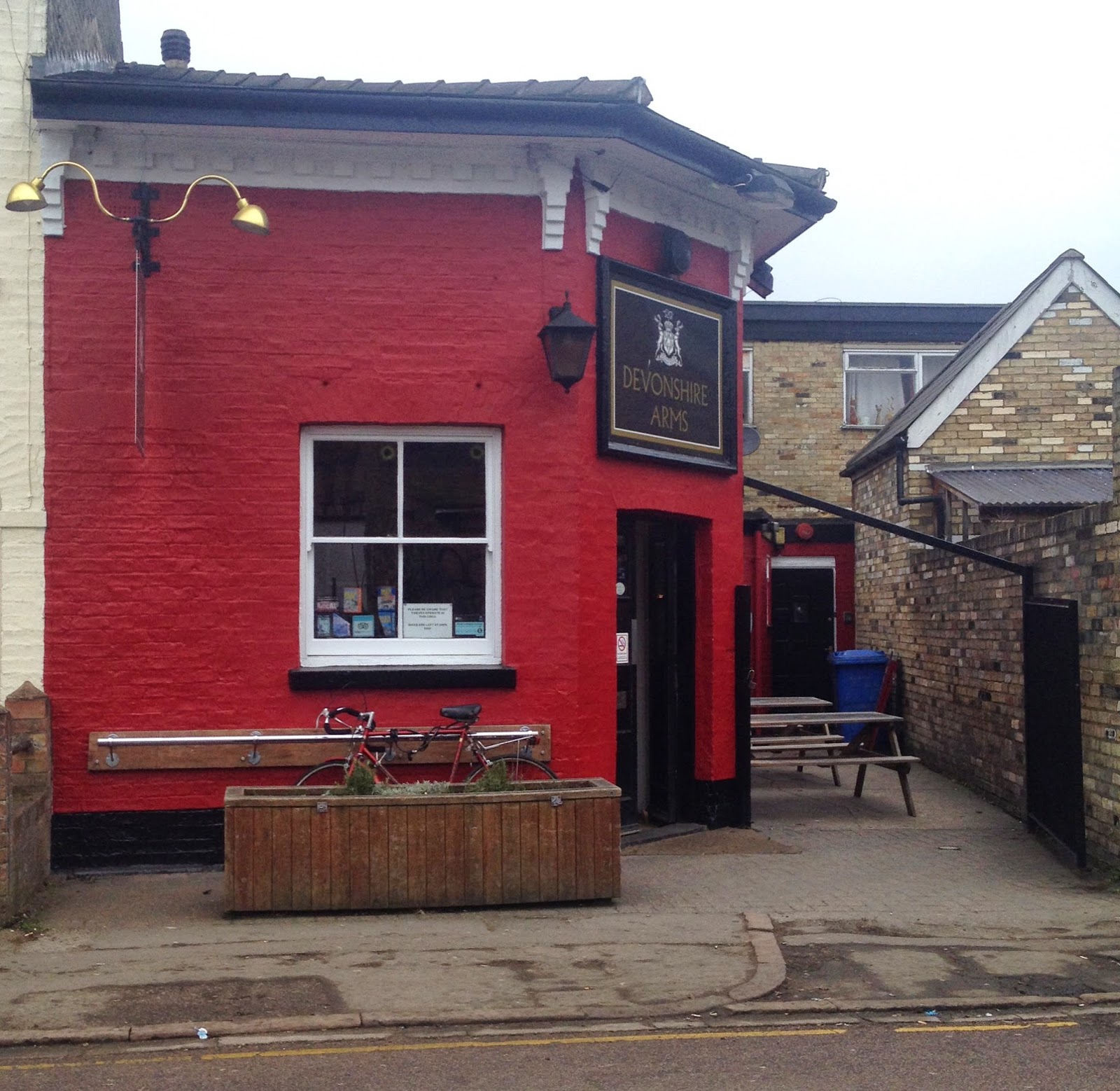 What looks to be a tiny pub turns out to be much bigger once inside. 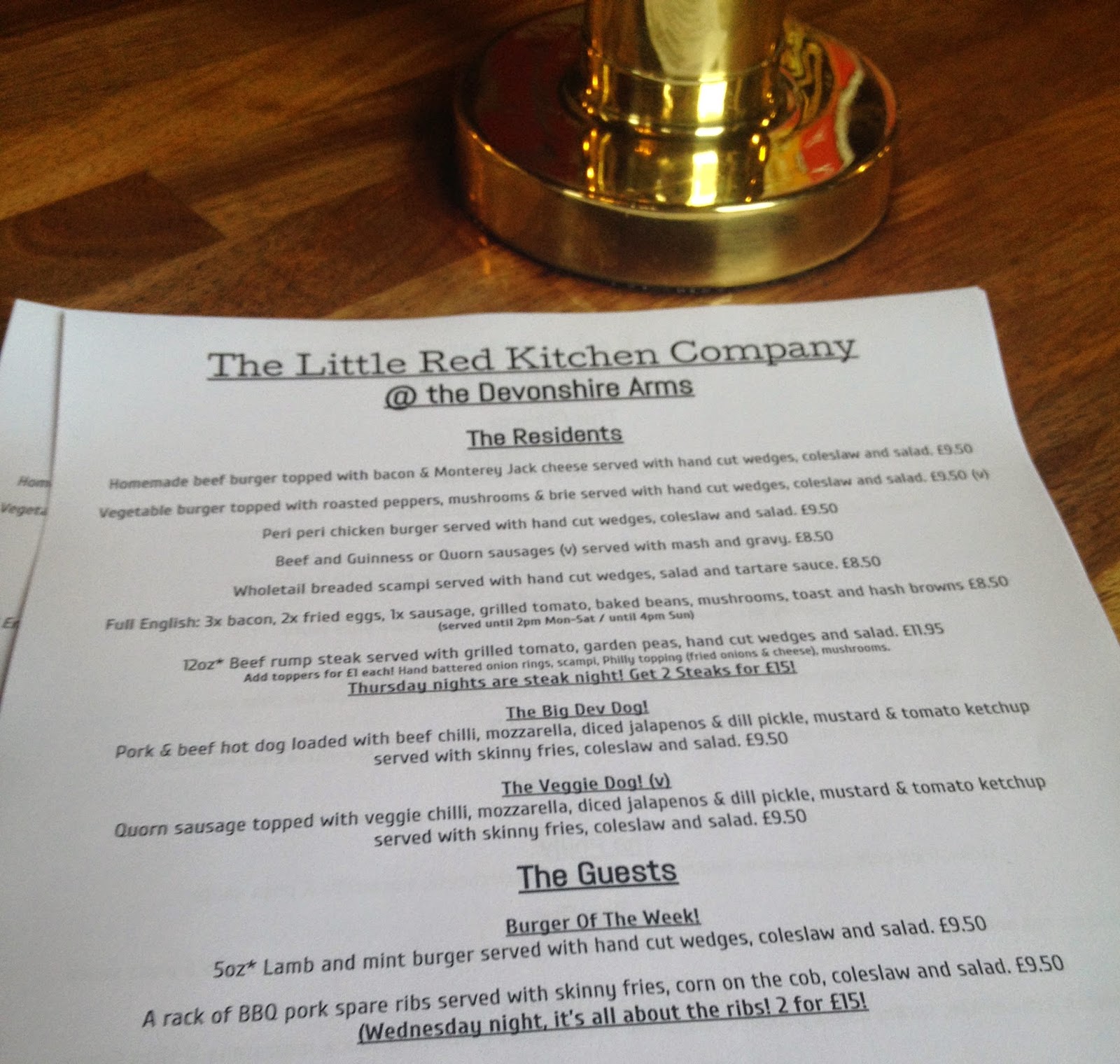 The Full English was the reason for this visit, as I looked up from the menu something caught my eye.. 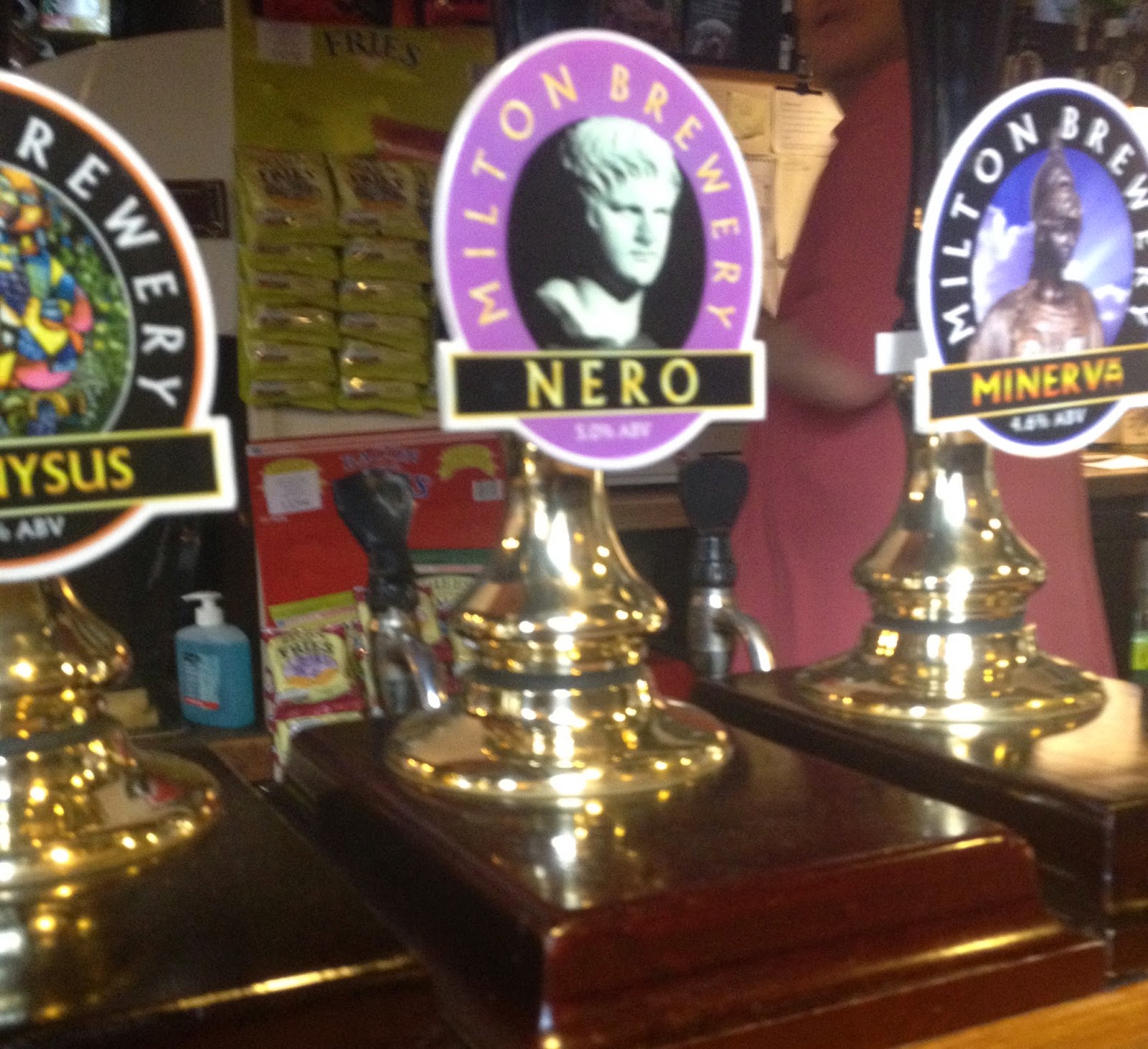 Milton Brewery on tap! I usually have a coffee with my breakfast but couldn't miss this opportunity. 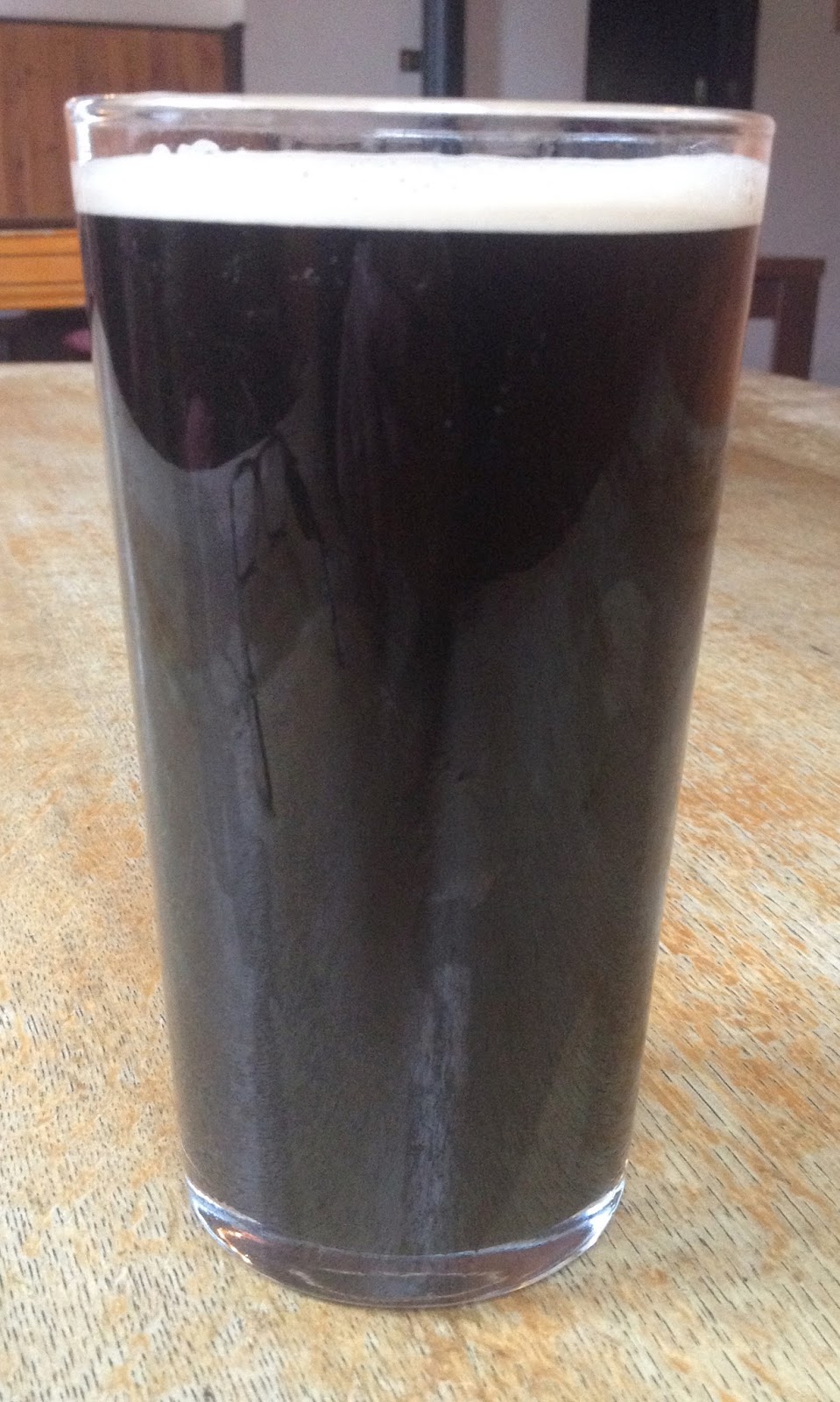 Milton Brewery Nero was very similar to Guinness, if I was scoring the beers here then 10/10! 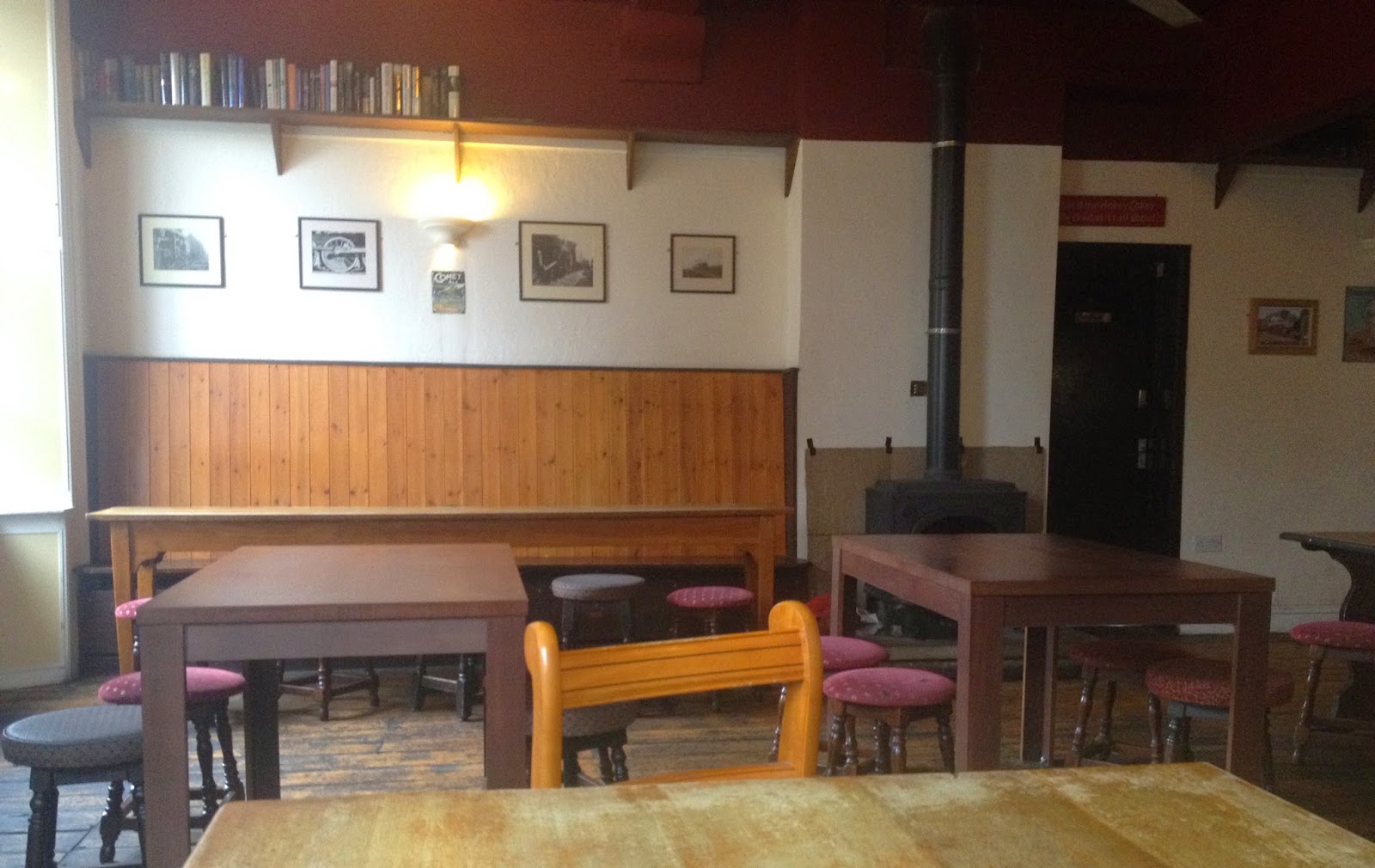 I sat in the large room at the rear, this became a familiar sight for 45 minutes after ordering when nothing at all happened, no cutlery, no sauces, no food. Had they forgotten about me?

After enquiring about my order the food arrived and on request some ketchup, salt or pepper must have been having a day off though, they were nowhere to be seen. 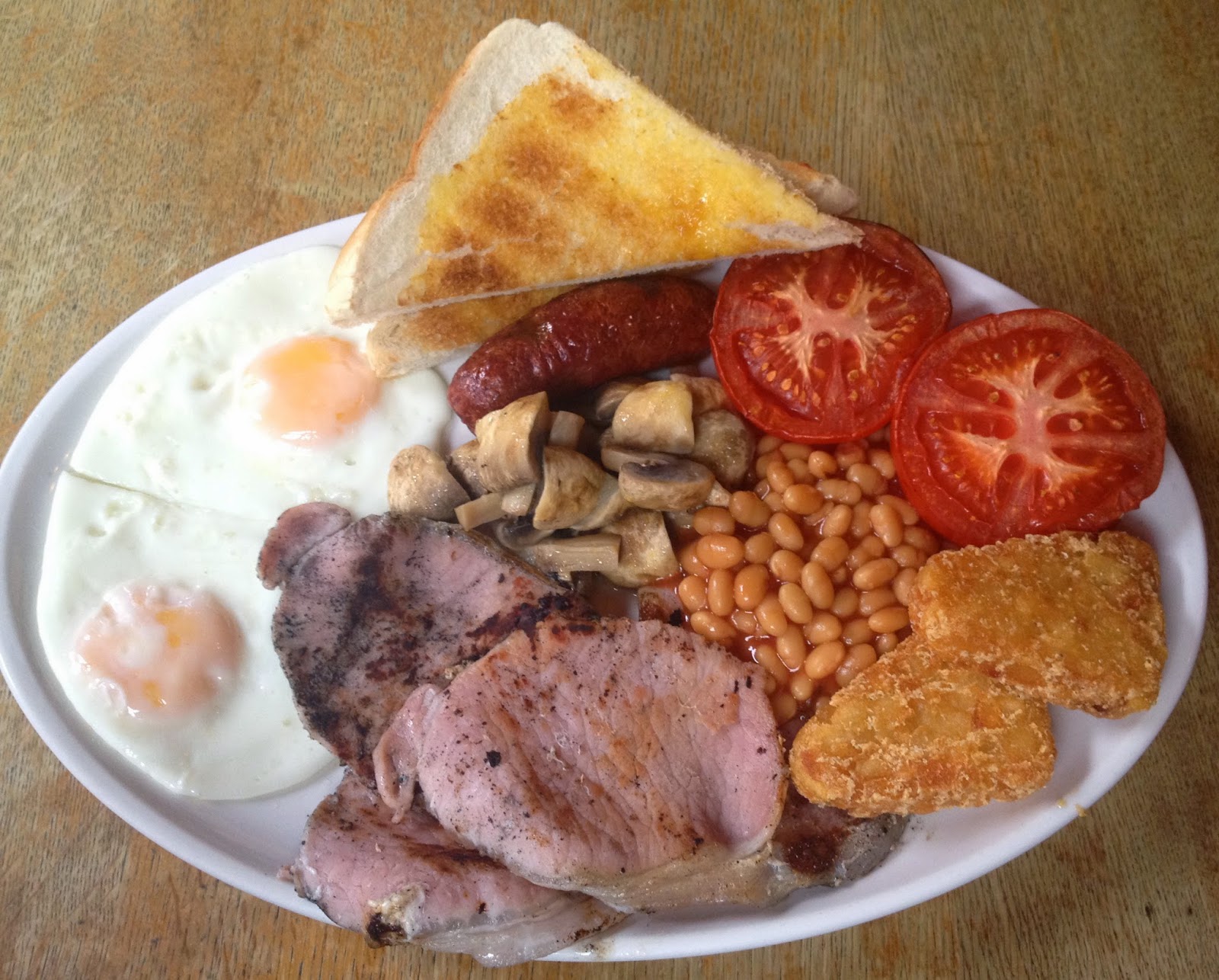 First impressions were not too bad, it was certainly a good sized breakfast. 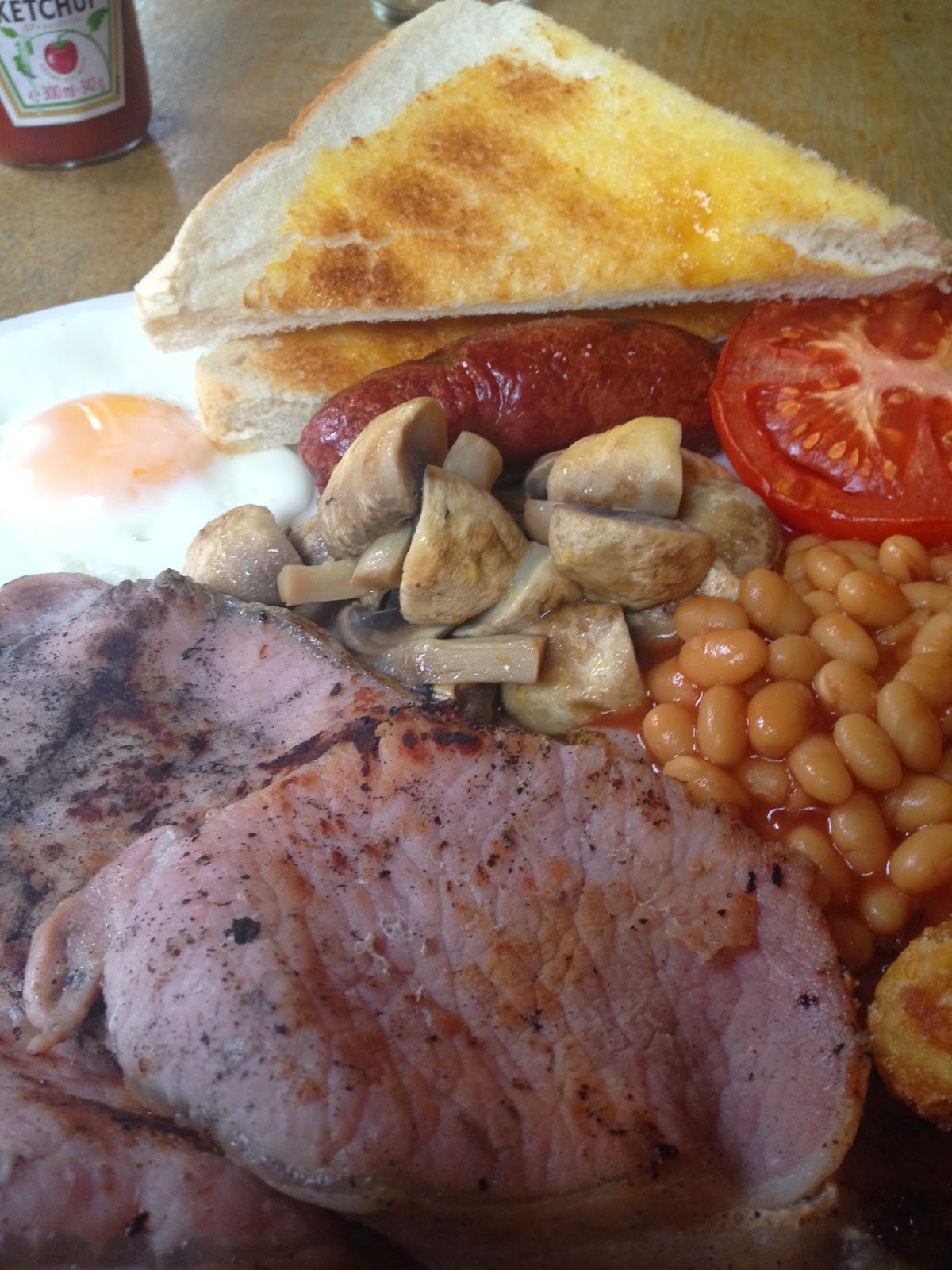 The bacon was quite a state though, it reminded me of the kind served from mobile catering vans or found at festivals. 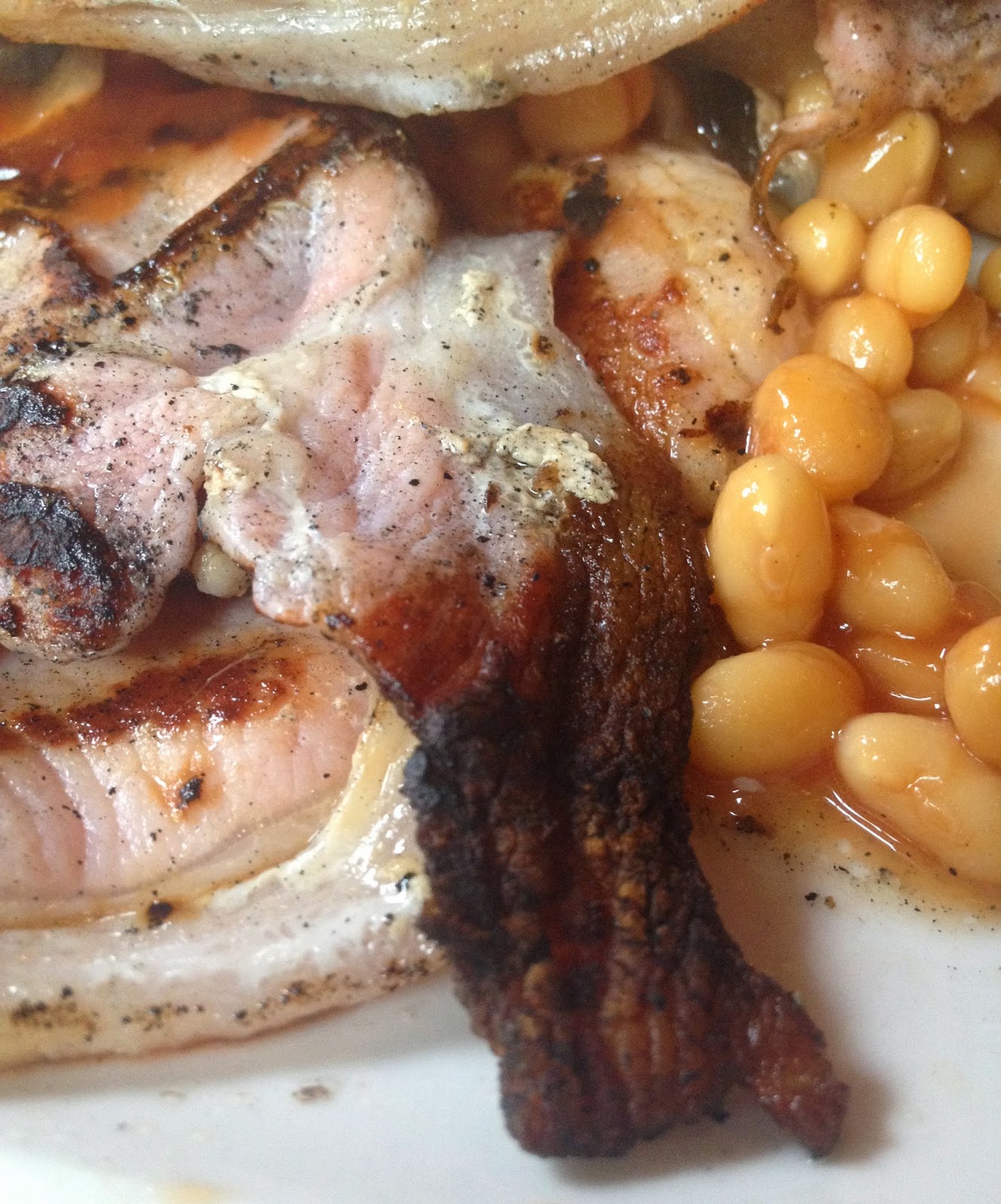 I regretted looking closer, was it safe to eat? 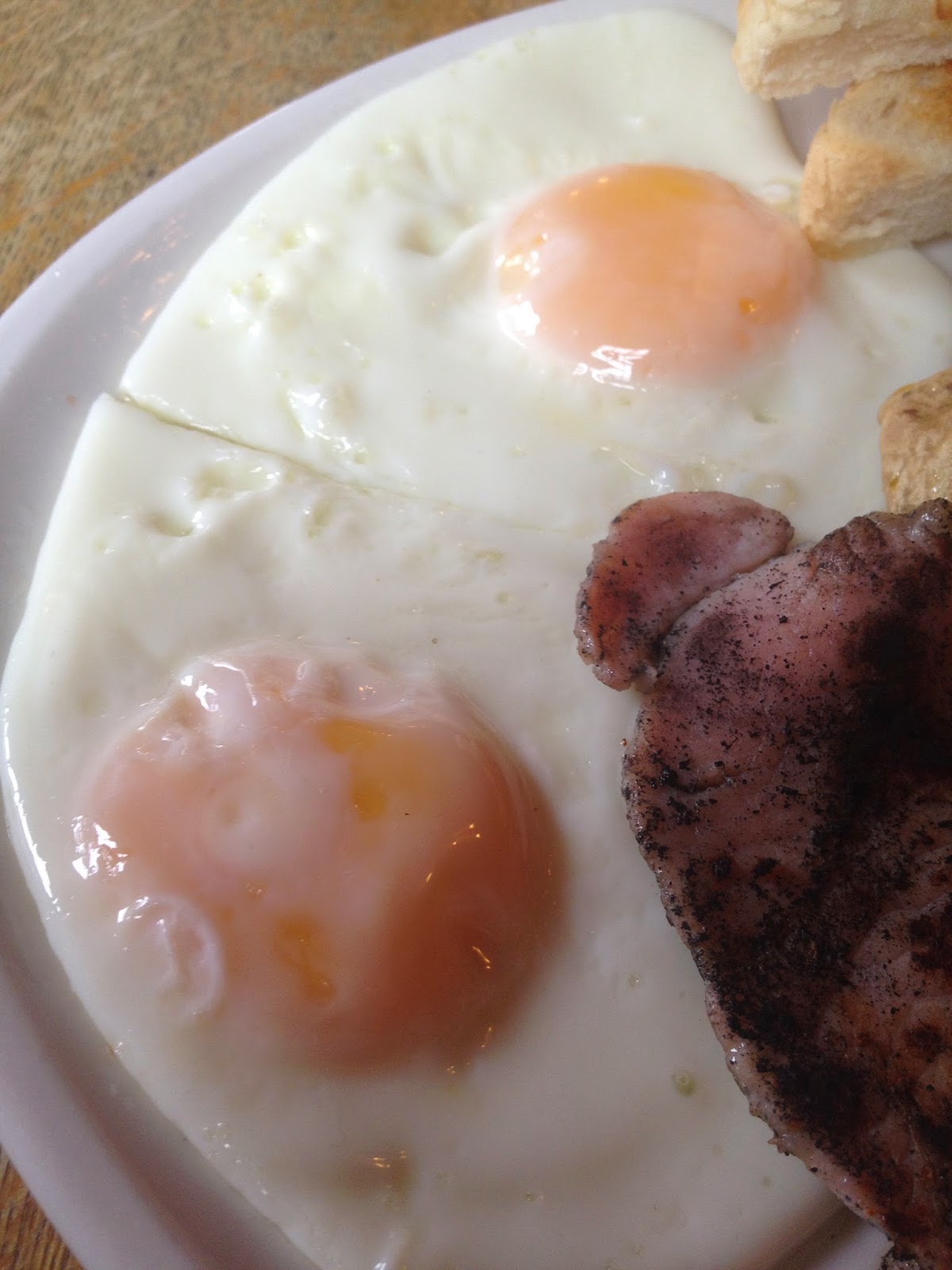 The eggs were looking pretty good but had ended up quite rubbery from standing too long. 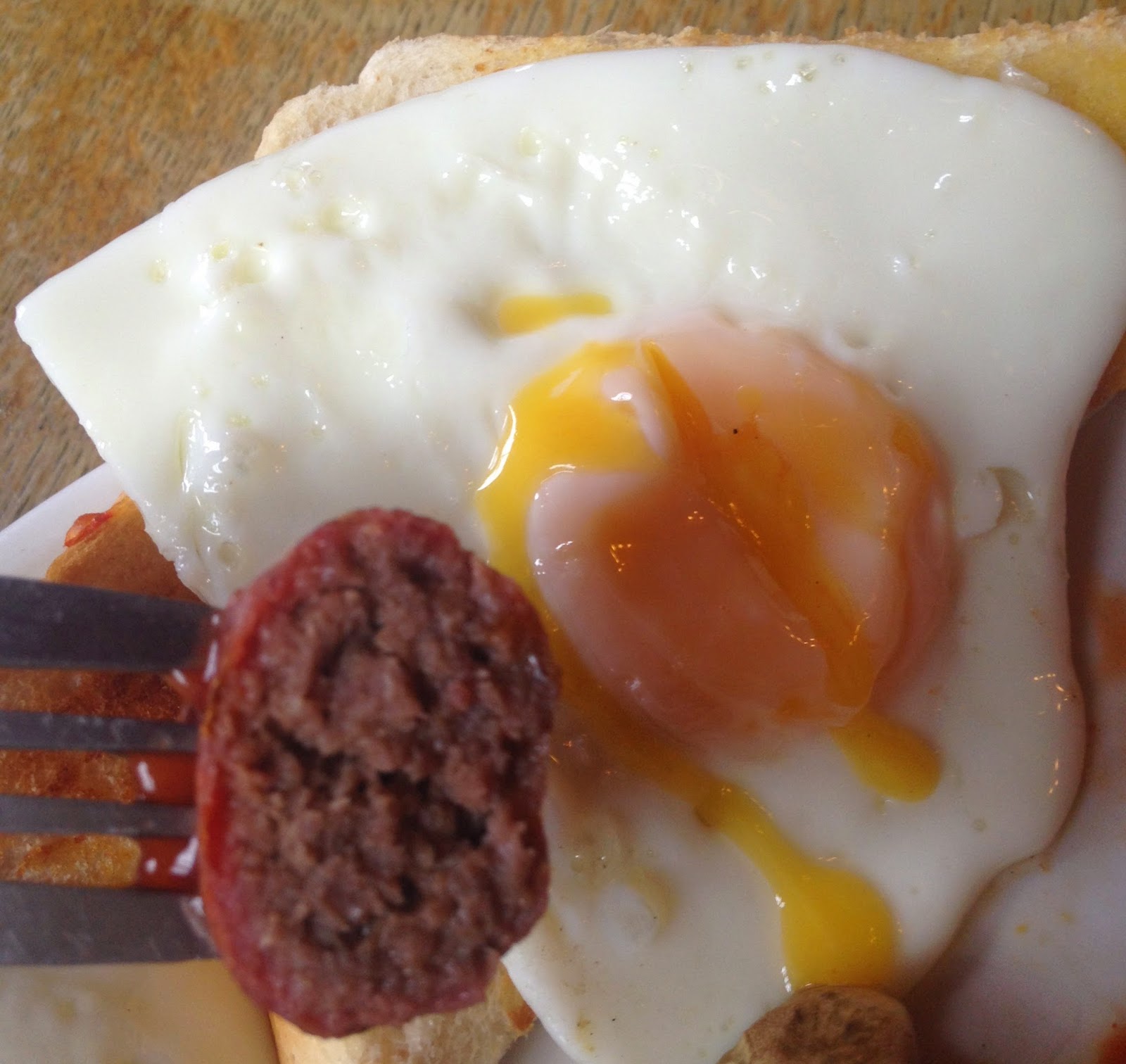 Thankfully the yolks were still runny though. The sausage was great quality but possibly beef and not an ideal breakfast sausage, far too rich. It would have gone nicely with some mash and gravy though. 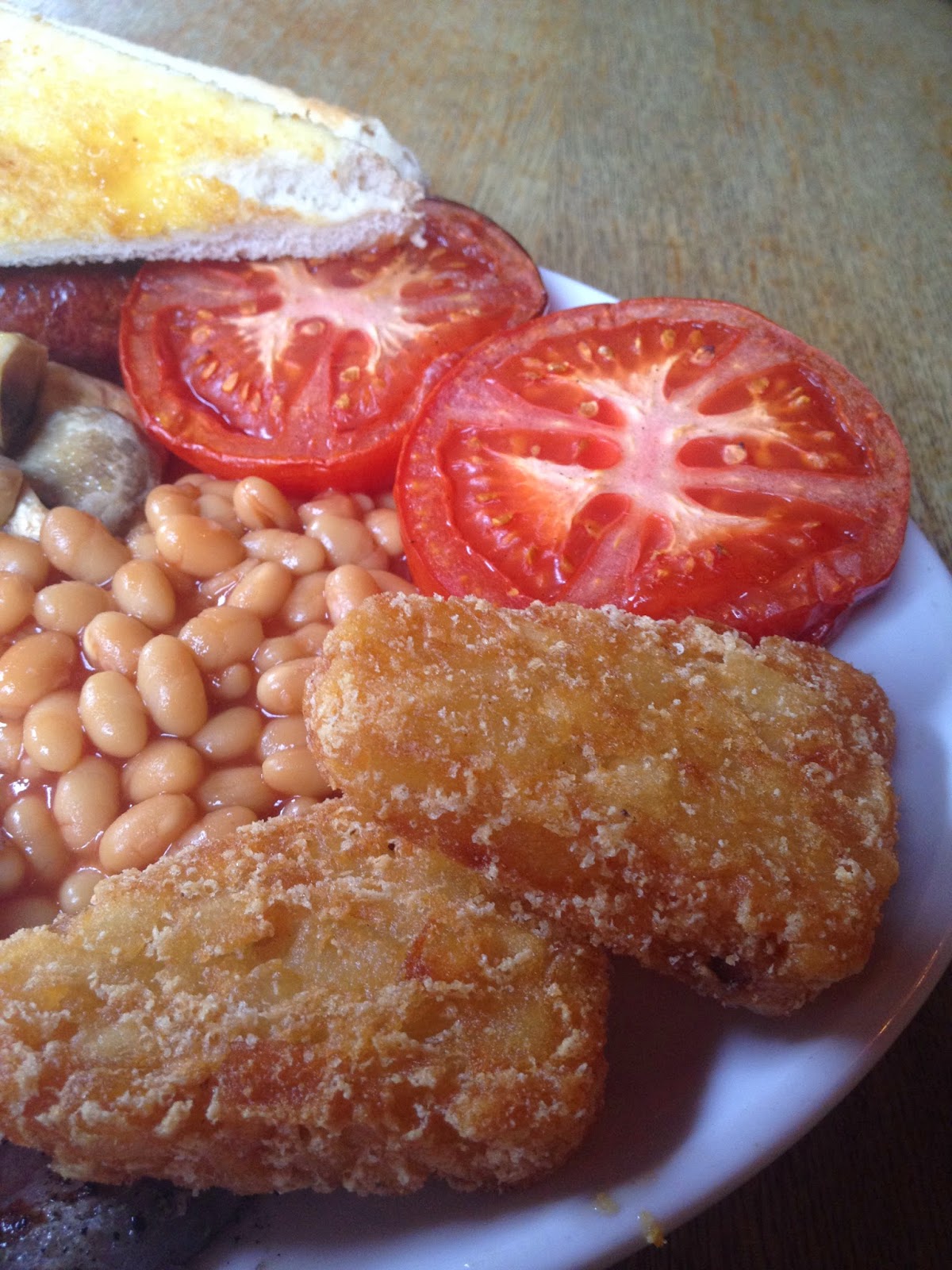 Deep fried hash browns and lukewarm beans. The tomatoes were the highlight of the breakfast, cooked nicely and packed full of flavour.

Having visited quite a few places for breakfast in Cambridge I was still looking for a really special breakfast that stood out from the rest. I decided this time to try a pub breakfast to see if that was where the answer lied in finding a really decent Full English breakfast in Cambridge. I was helping my wife out at a craft fair at The Round Church for the day, as soon as the stall was set up I headed towards Mill Road in search of The Devonshire Arms..

Upon entering - From the outside I was expecting a tiny little pub but this place is like a tardis! There are plenty of well spaced out tables in the area at the front by the bar and an even bigger room with high ceilings towards the rear. It is well lit with natural light and a very traditional interior, certainly a great place to enjoy a meal or spend the evening knocking back some pints! There were menus on the bar where I spotted the Full English, placed my order and paid. The food is brought to the table when it is ready and you are offered sauces, at that point it may be a good plan to ask for salt and pepper too if you want it as it didn't appear at all on my visit. 7/10

Service - I placed my order at the bar and couldn't resist trying a pint of Milton Brewery Nero, the chap behind the bar seemed fairly helpful and asked me where I would be sitting. I sat down and enjoyed my pint but nothing else seemed to happen, no cutlery or condiments arrived and I started to wonder after 45 minutes if I had really ordered a breakfast or just imagined it. I enquired at the bar and finally after 50 minutes the breakfast arrived along with the cutlery, sauces were offered but salt and pepper never appeared. I sat and ate the breakfast but didn't see or hear from anyone after it had arrived. I couldn't quite work out why the food took so long to arrive after placing my order as there were only a few customers, I kept telling myself it must be a pretty impressive breakfast if it is taking this long to prepare but sadly this wasn't to be the case.. 4/10

Presentation - For a few seconds when the food was placed before me I was quite impressed, it looked to be a nice big breakfast selection covering the large oval plate in a nice layout. My initial enthusiasm for it soon faded though as I found myself staring at the state of the bacon. 4/10

The food - The sausage was good quality and had a really nice texture, I couldn't quite detect the flavour though, possibly some kind of beef sausage? Whatever the variety was though I found it far too rich as a breakfast sausage. The bacon reminded me of being at Santa Pod for the weekend and buying a bacon bap at one of the mobile catering vans. It was blackened by the griddle and not at all enjoyable, quite chewy in some places and black in others. The fried eggs would have been fairly spot on but must have been left too long after cooking as the whites had turned quite rubbery, nice yolks though. The beans were luke warm, the mushrooms undercooked and the hash browns although crispy had a strong oily flavour. It wasn't all bad though, the toast was ok and the tomatoes were excellent, packed full of flavour and cooked really nicely. 4/10

Overall - I liked the pub but have no idea why I waited so long for such a disappointing breakfast to arrive. I am guessing the crucial timings involved with cooking a full English were where it all went wrong here. It certainly had potential but as it stands more practice is needed to create a breakfast worthy of an £8.50 price tag. Great tomatoes and pint of Nero though! 5/10