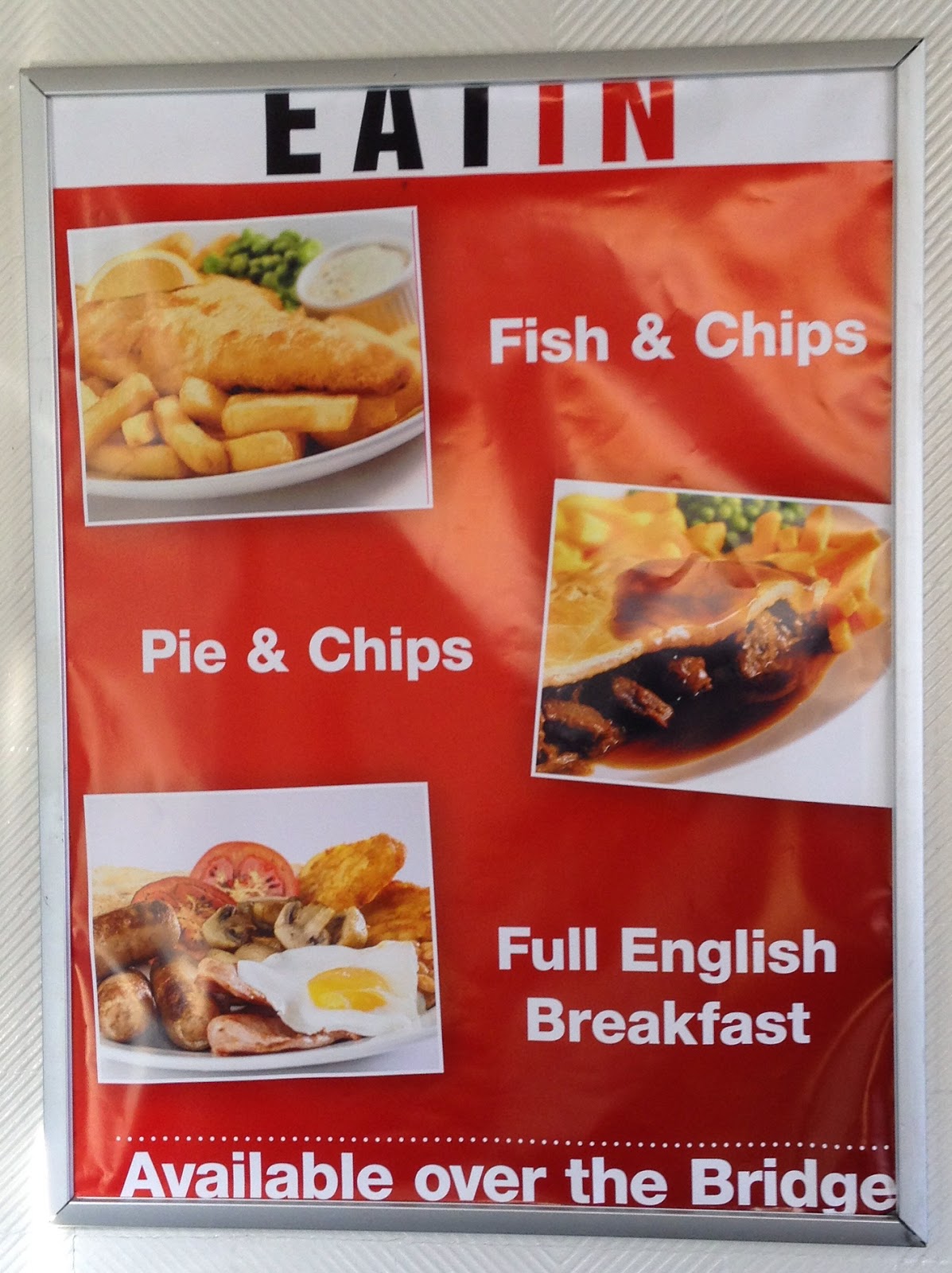 A Full English Breakfast is available to westbound traffic at Eat In on the M3, thankfully a connecting walkway ensures people heading eastbound don't miss out either. 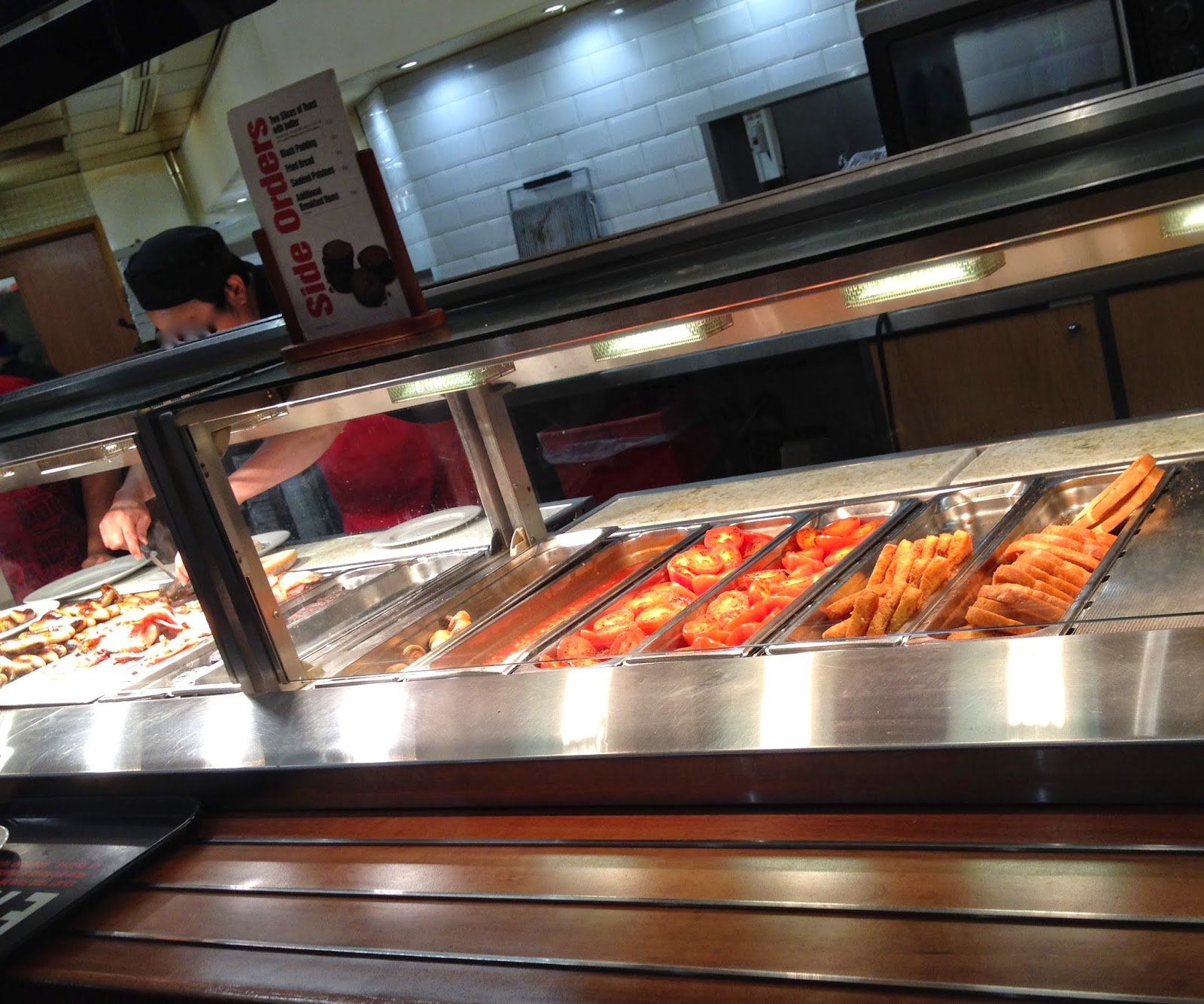 Everything is cooked already so grab a tray and join the end of the queue. 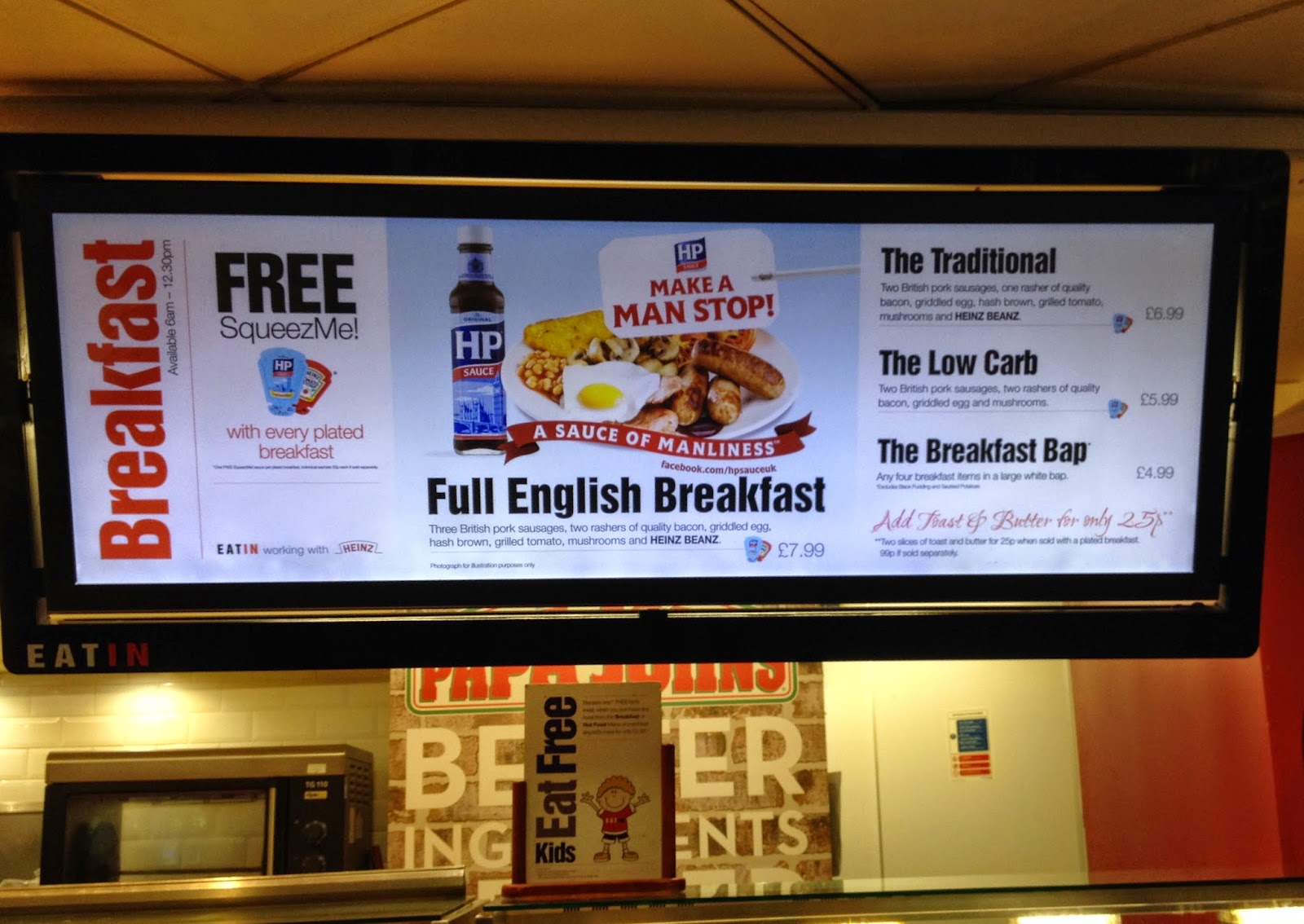 A single portion of sauce (usually 20p) is offered free with every breakfast, I could hardly contain my excitement. My wife headed off to Subway as soon as she spotted no vegetarian breakfast on offer. 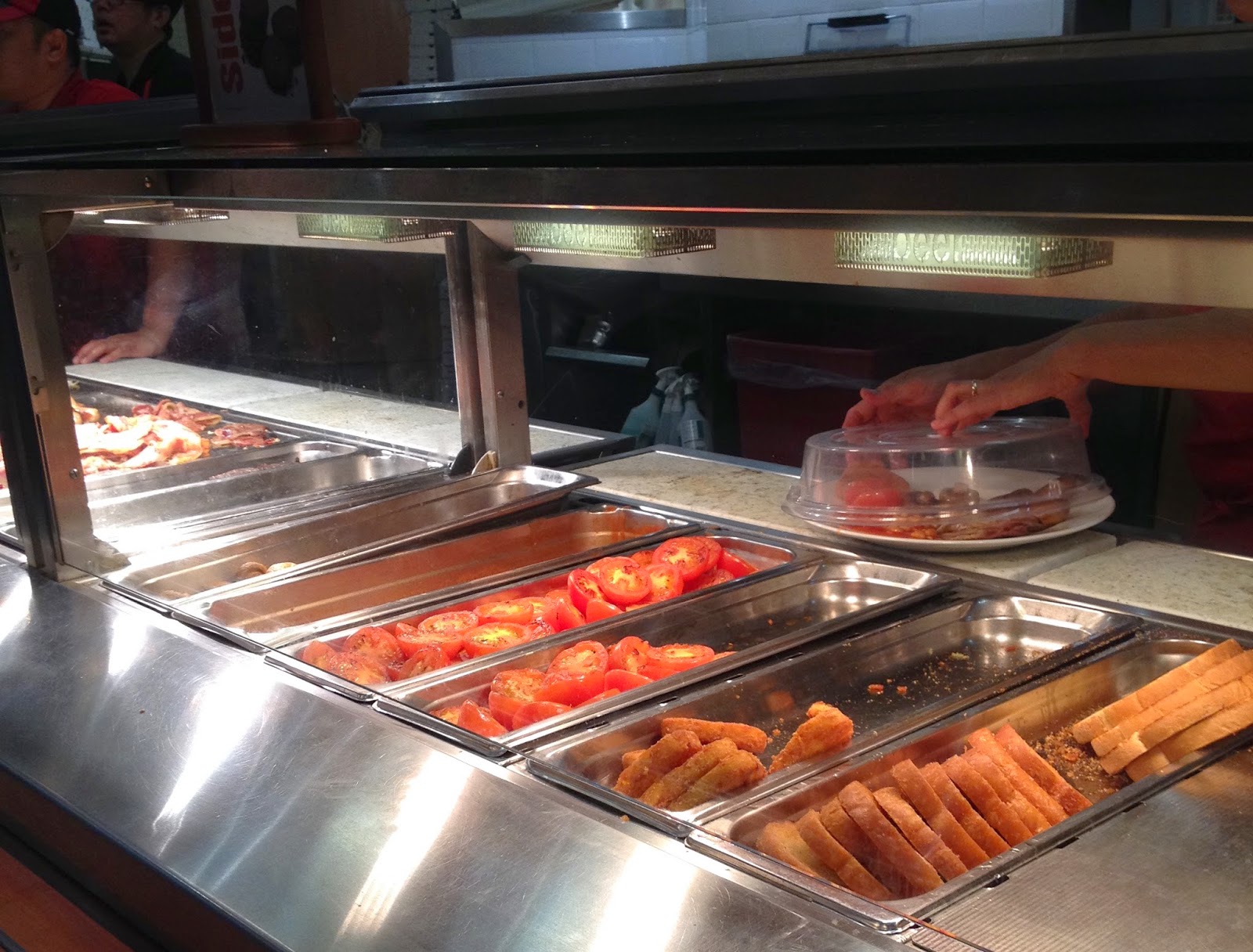 Because there was a constant queue of people wanting breakfast the food wasn't sitting too long under the hot lamps before making it onto plates. 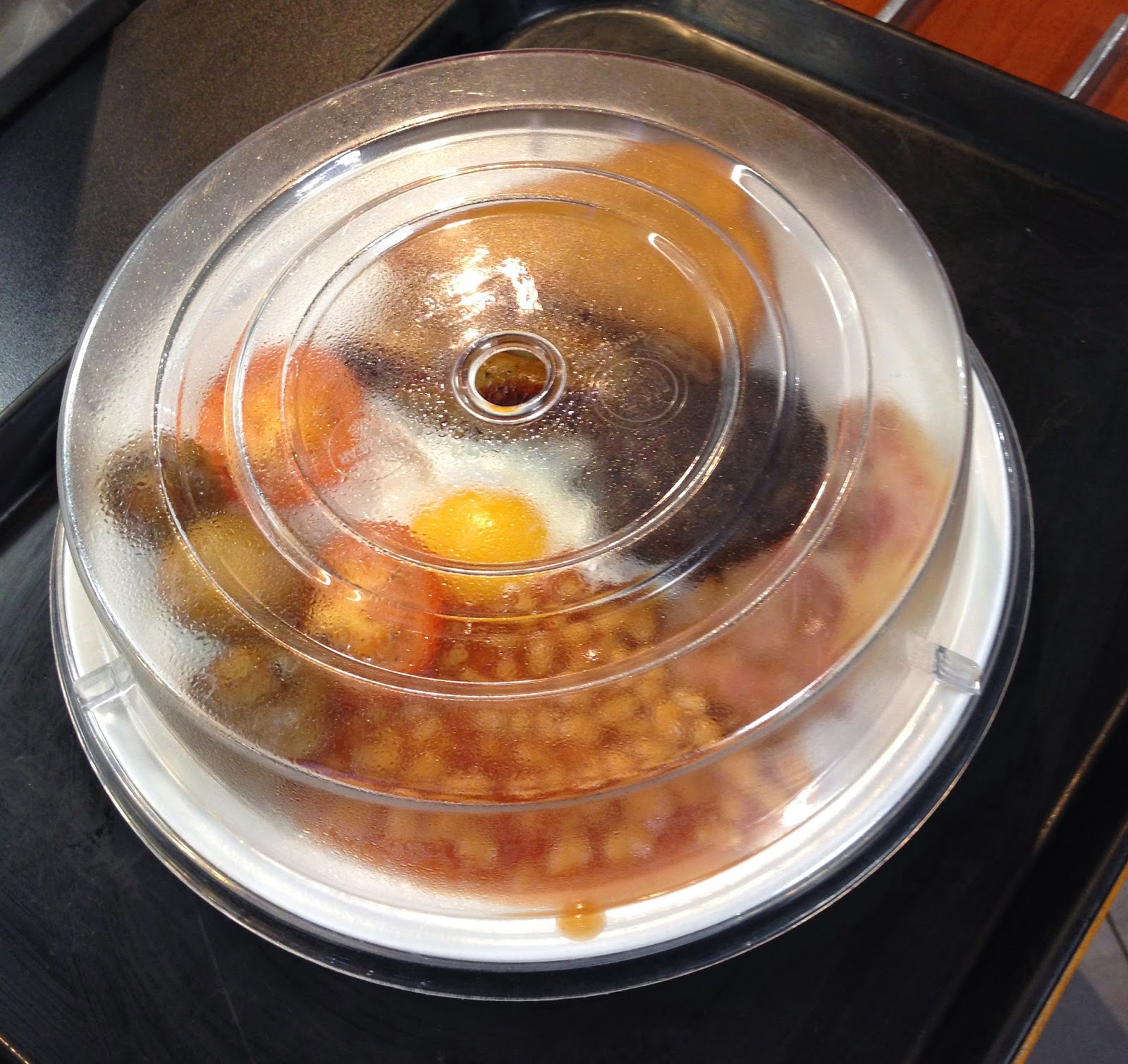 The cloche was a good idea here as you wont be sitting down for some time! 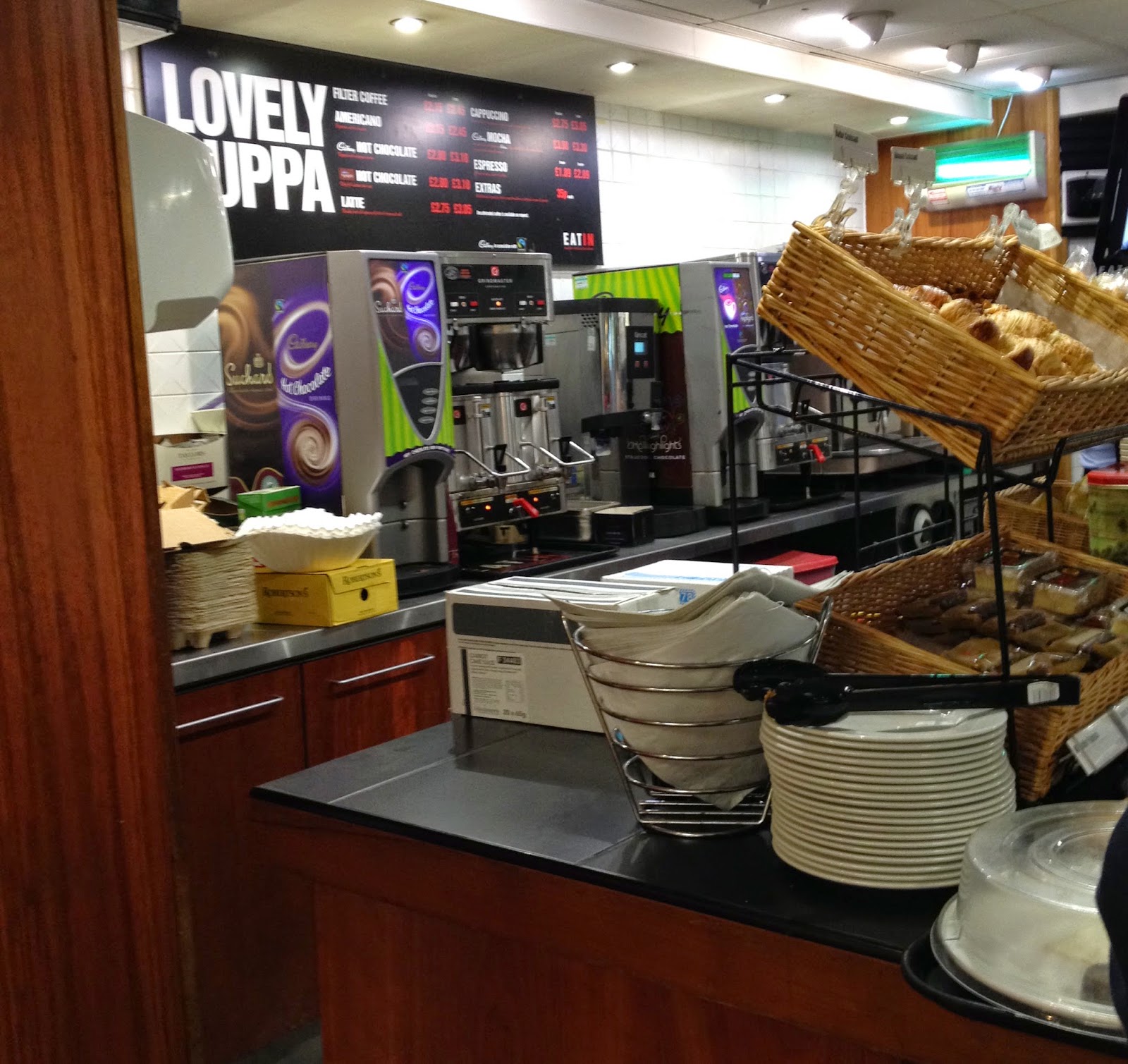 I waited around 5 minutes queueing for the advertised "Lovely Cuppa"
During this time I watched the heat from my breakfast slowly disappearing.. 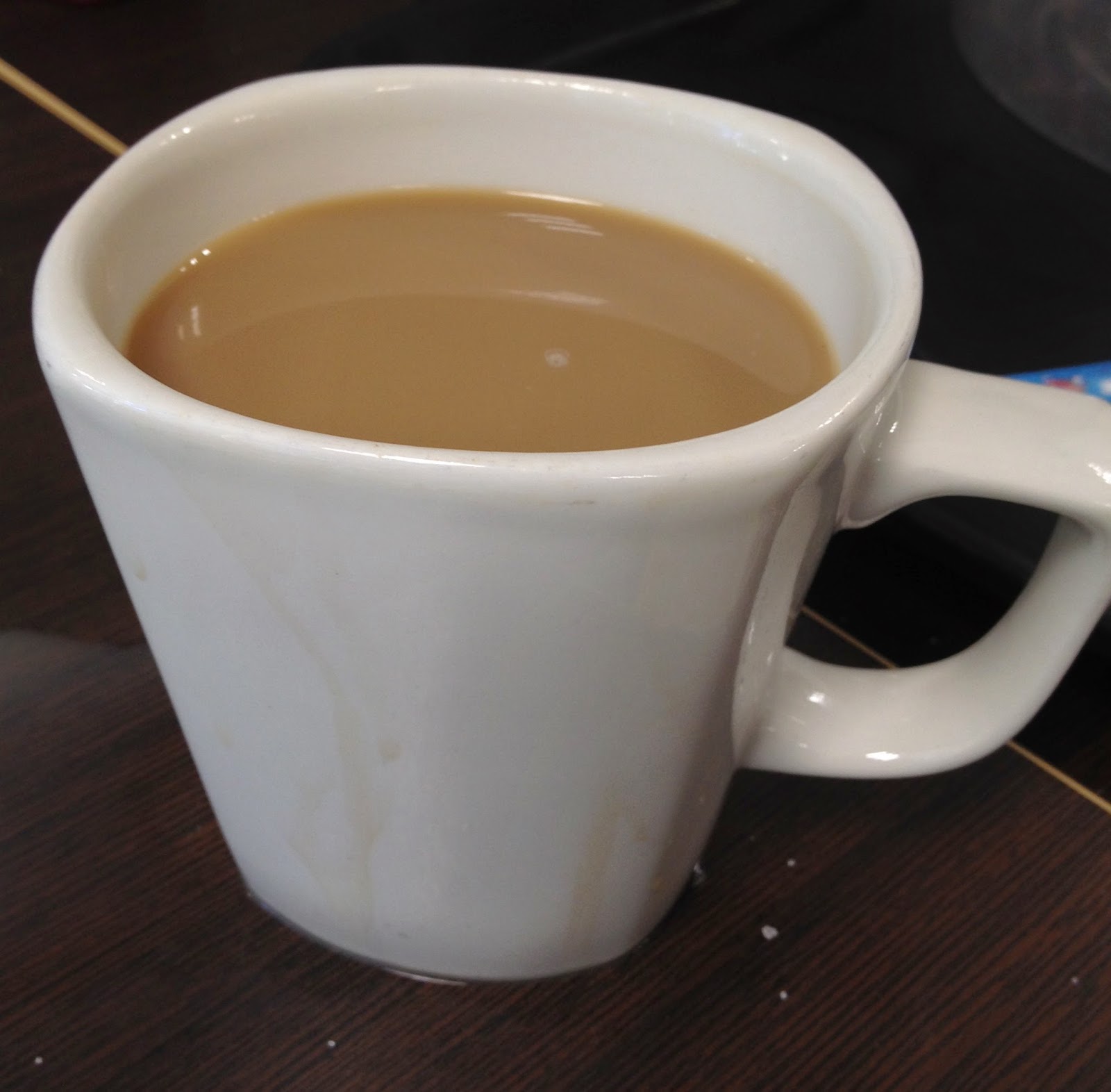 The not so lovely cup of filter coffee cost £2.15, by the time I sat down to drink it the temperature had dropped considerably. I had been looking forward to a decent cup of coffee all weekend but what I had made in my campervan each morning using powdered milk seemed better than this. 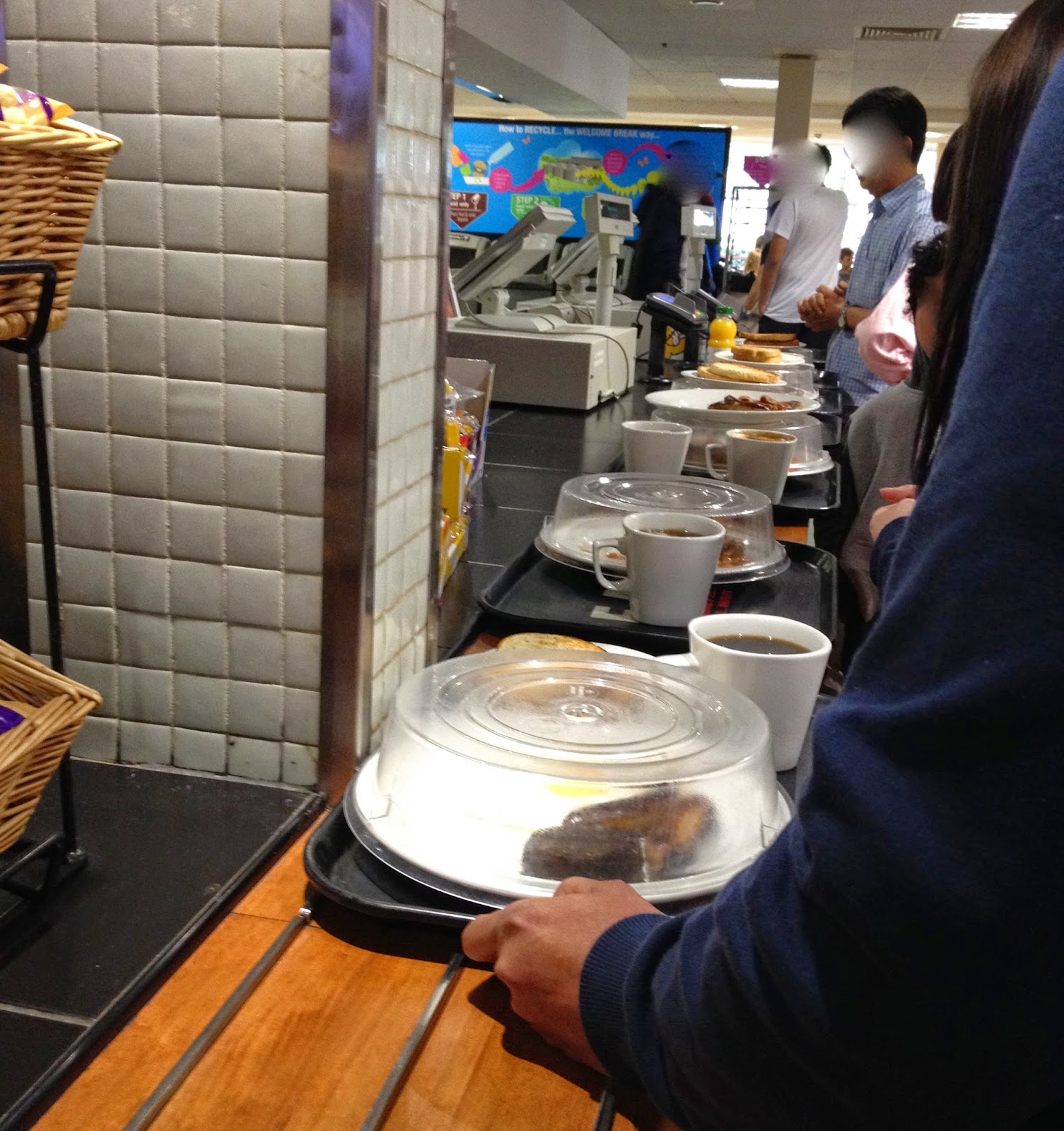 With coffee and breakfast both on my tray I ended up here waiting to pay, nobody seemed to be in a hurry and the temperature of my food continued to drop.. 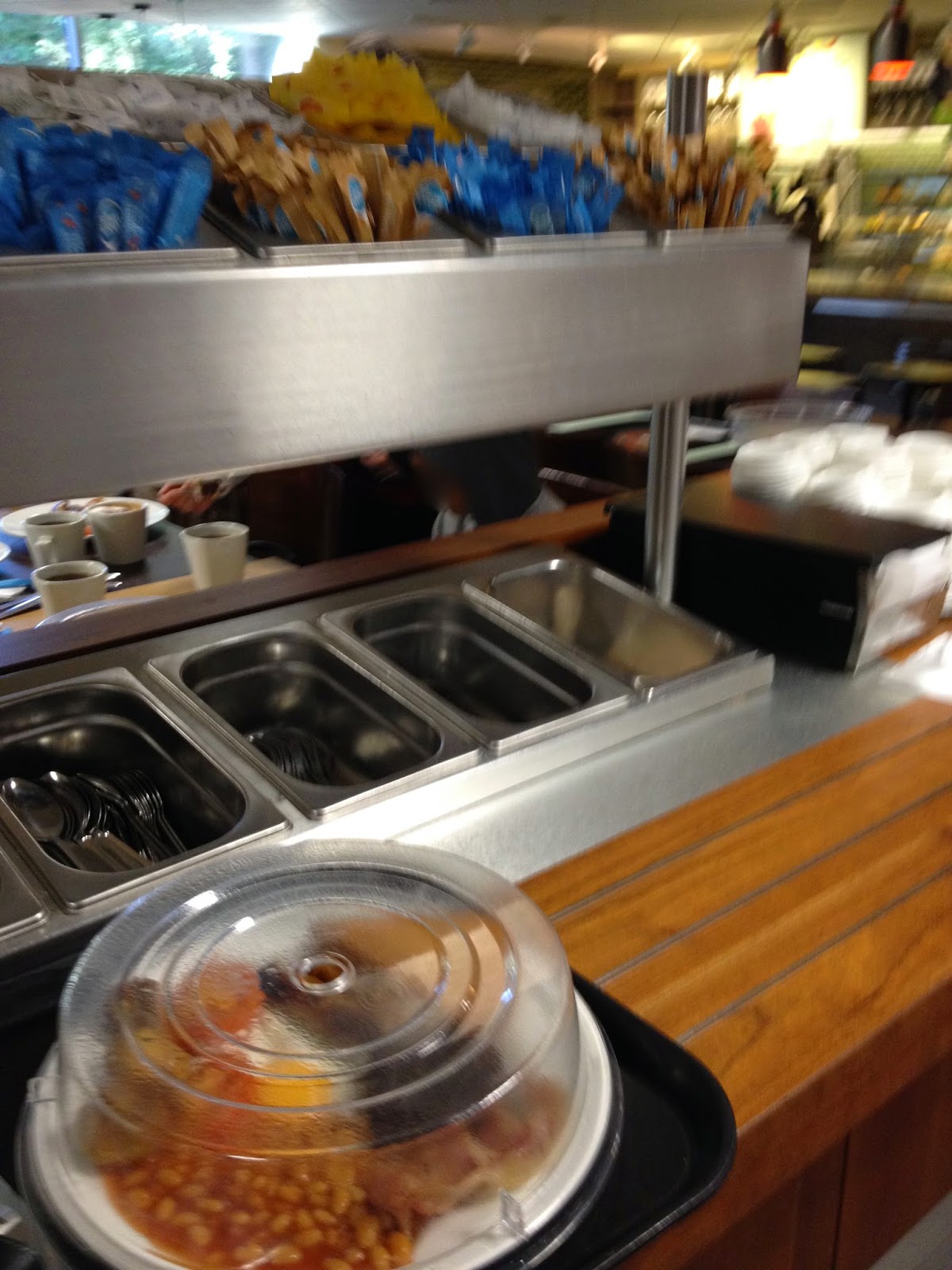 It was still not time to eat though, a quick visit to collect cutlery, sugar etc was needed first. 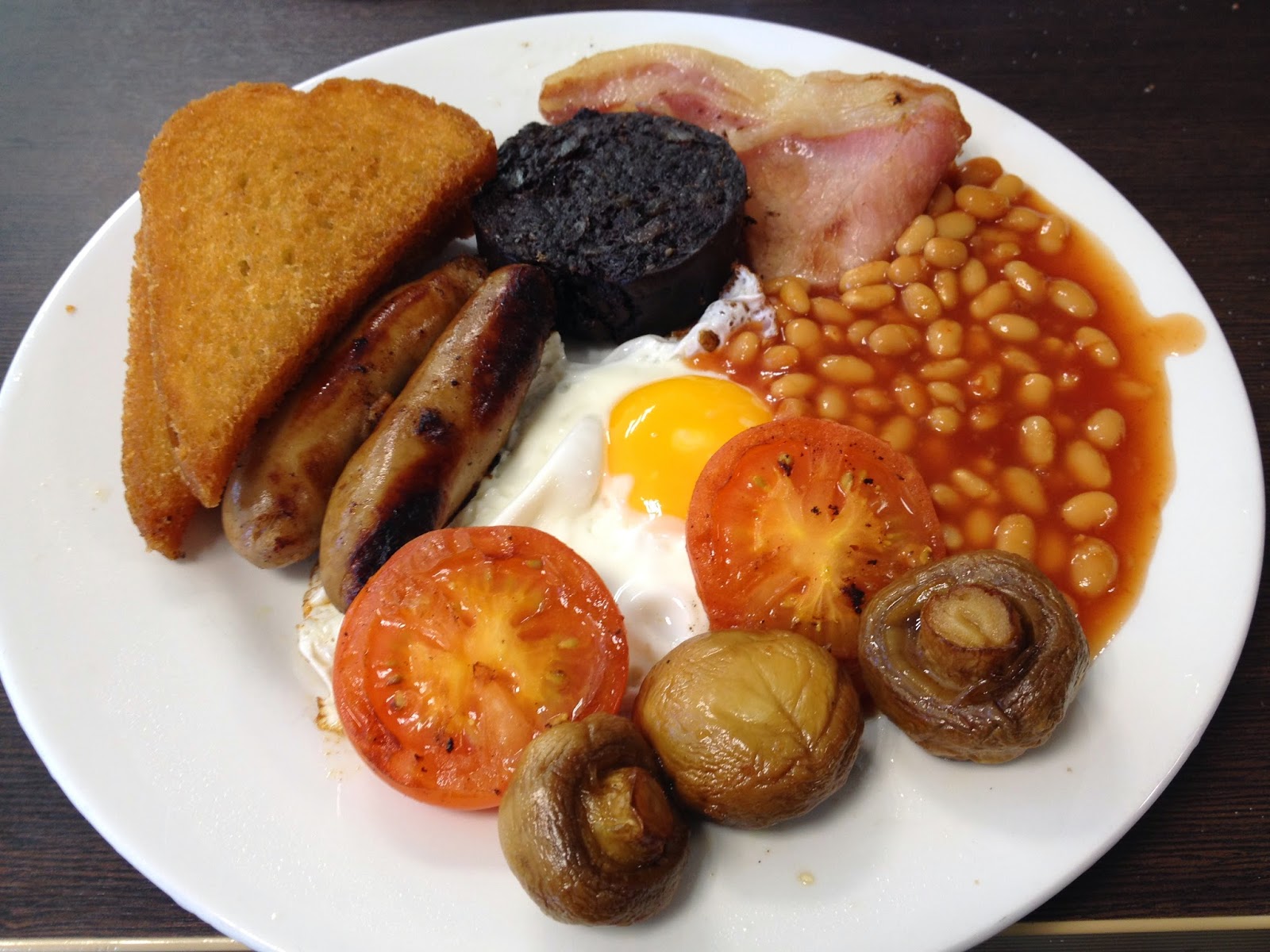 I lifted the cloche and was quite impressed with what lurked underneath. Presentation was looking good, temperature was a big concern and where was my hash brown? 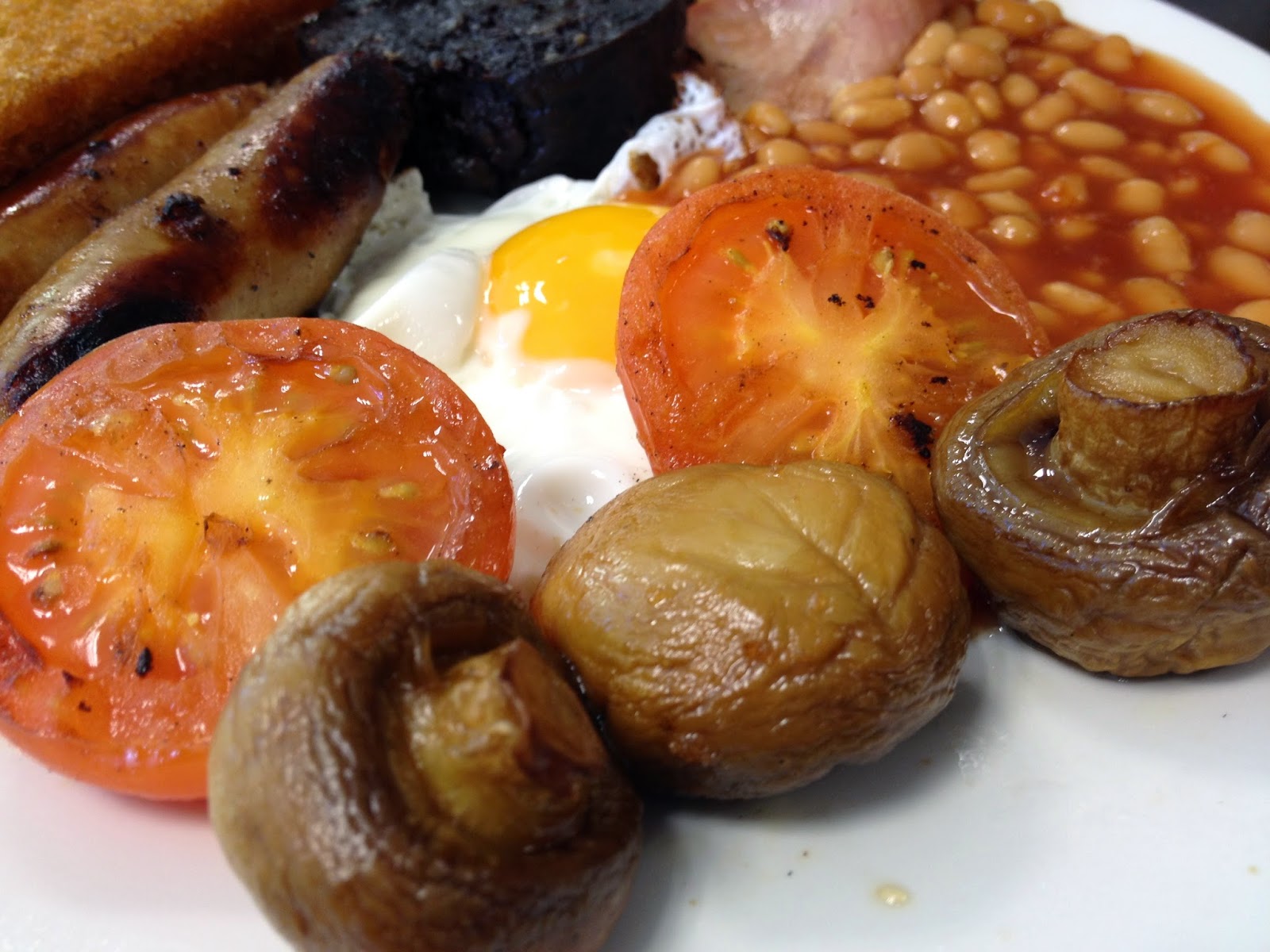 The mushrooms were really nice but the tomatoes tasted of nothing at all. 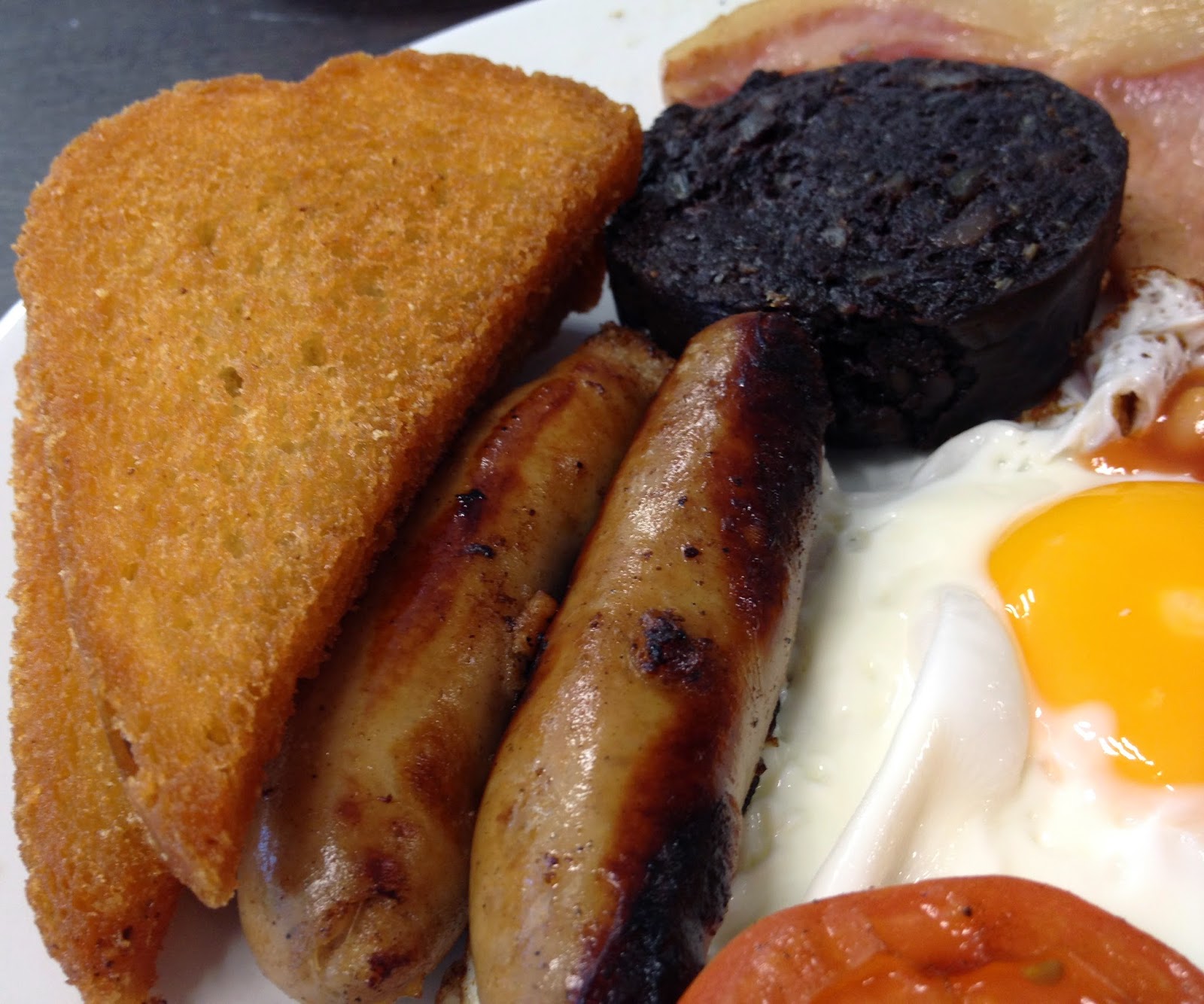 The fried bread and black pudding was the highlight of this breakfast, the sausages looked quite disappointing but were enjoyable. 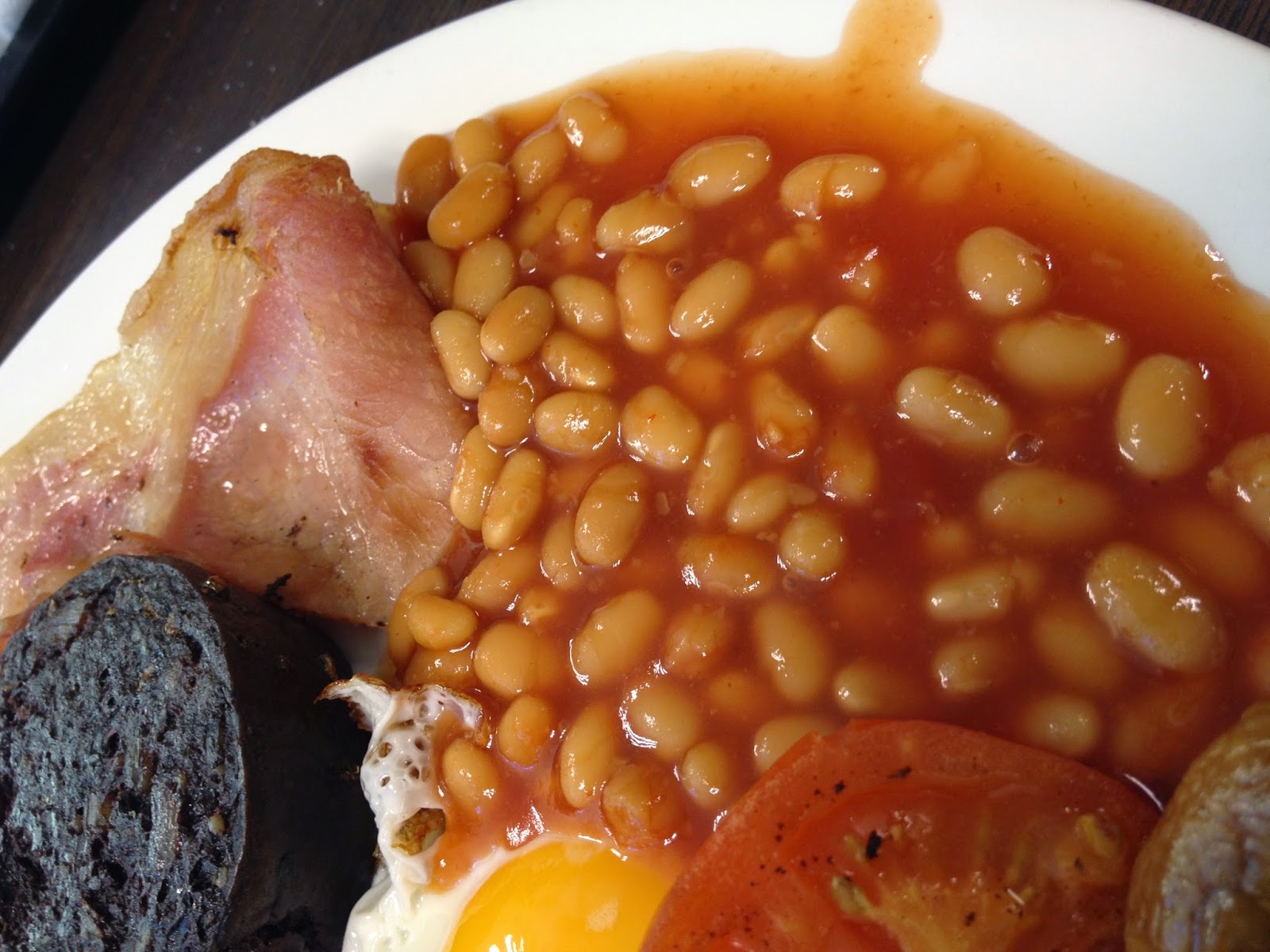 Egg/bean juice contamination may have made many shudder, I am always happy to let the two combine though.

This was my fifth visit to Boomtown Fair, it had been yet another amazing festival with a great line up of bands and mind blowingly good site layout. Early Saturday morning my wife and I were woken by the almost continual buzzing of my iphone on the dashboard of my campervan. My first thought was that moisture had damaged it causing it to vibrate, it was only when I checked the phone that I realised my article on the BBC had been published. For the rest of the weekend tweets, emails and facebook notifications flooded in, in 24 hours 249,500 page views were clocked up on the Fry Up Inspector Blog! I tried my hardest with what little signal I had to reply to people but emails were coming in faster than I could reply to them so I decided to continue with Boomtown partying! On Monday morning we woke up just before 7am, whilst everyone else was still sleeping we decided to leave the site and go in search of some breakfast. Winchester Services is where we had stopped last year (read about it here) but we wanted something that was still hot so we drove on to Fleet Services on the M3..

Upon entering - Fleet Services can be accessed from both sides of the M3, a raised walkway connects both sides. We needed to get across the motorway so headed across the slightly depressing walkway and ended up on the westbound side. A selection of different food outlets surround a large dining area, it all feels quite hectic and requires some patience. I studied the breakfast situation being offered by Eat In and went with that, my wife went to Subway and we decided to sit together after we had paid. I took a tray and decided the traditional breakfast with a couple of extras would be a good plan. A cloche is put over the food to keep it hot (it actually only keeps it warm though..) you then queue for a drink. Next you join another queue to pay and finally you collect cutlery, sugar etc before finding somewhere to sit. Standing around in queues watching your food slowly go cold in a quite hectic environment isn't much fun really, that said though motorway services are always a bit of a nightmare. 4/10

Service - There were plenty of staff doing their best to serve the breakfast items to the long queue of customers and they all seemed fairly friendly. Just one person serving drinks was causing a bottle neck in the system and he kept telling me the ketchup was by the till, it was actually in his section though causing even more confusion and delay. The lady on the till seemed to be the most efficient person in the team, the queue here was long but she soon put everything through the till ensuring people could finally sit down and eat. Considering the flow of people and lengthy system put in place the service was pretty good overall. 7/10

Presentation - I was pleasantly surprised as I lifted the cloche off the plate, the realisation that they had forgotten the hash brown was a bit of a shocker but the placement of the items was pretty good. Quite a vibrant mix of colours making this breakfast one I was keen to get stuck into. 7/10

The food - I will firstly mention that everything was warm, I suppose this was to be expected though with such a lengthy queueing system put in place. The sausages are described as "British pork sausages from an award winning butcher" I would describe them as a rather small pork sausage with fairly good texture and nice enough taste, they reminded me a bit of school sausages if I'm honest but they were nice enough. The bacon tasted ok but was very soft with not a trace of crispiness anywhere. I really enjoyed the thick slice of black pudding, soft but not too crumbly with a decent flavour. The highlight of this breakfast though was definitely the golden crispy fried bread, with the fried egg perched on top releasing its nice runny yolk, things were looking up! The mushrooms were delicious, sadly the same can not be said for the tomatoes, these tasted of nothing at all so I left them. The fairly generous serving of beans provided the necessary wetness required on a breakfast but further sauce reduction would have been nice. I did rather enjoy this breakfast despite warm temperature and tasteless tomatoes, It certainly hit the spot in places. 6/10

Value for money - The traditional breakfast cost £6.99 (the hash brown was forgotten though..) The black pudding was 99p, the fried bread should also have been 99p but I didn't declare it at the till (Sorry Eat In!) So with a coffee everything came to £10.13. Motorway services are always expensive so for a large breakfast with drink the cost didn't really surprise me, just a shame it wasn't all piping hot though. 6/10

Veggie option - Not a specific vegetarian breakfast, you could create one from the items available though.

Overall - Not the most straight forward of breakfast experiences but this place gets busy so I guess this is the best system they have come up with. The breakfast is one of the best I have eaten at a motorway service chain but the fact it seems fairly impossible to eat it hot does put a quite a downer on it. Probably a better option if you can stop by here when it is much less busy, I would certainly attempt it again. 6/10