Opening hours
Monday to Saturday
6.30am till 2.30pm 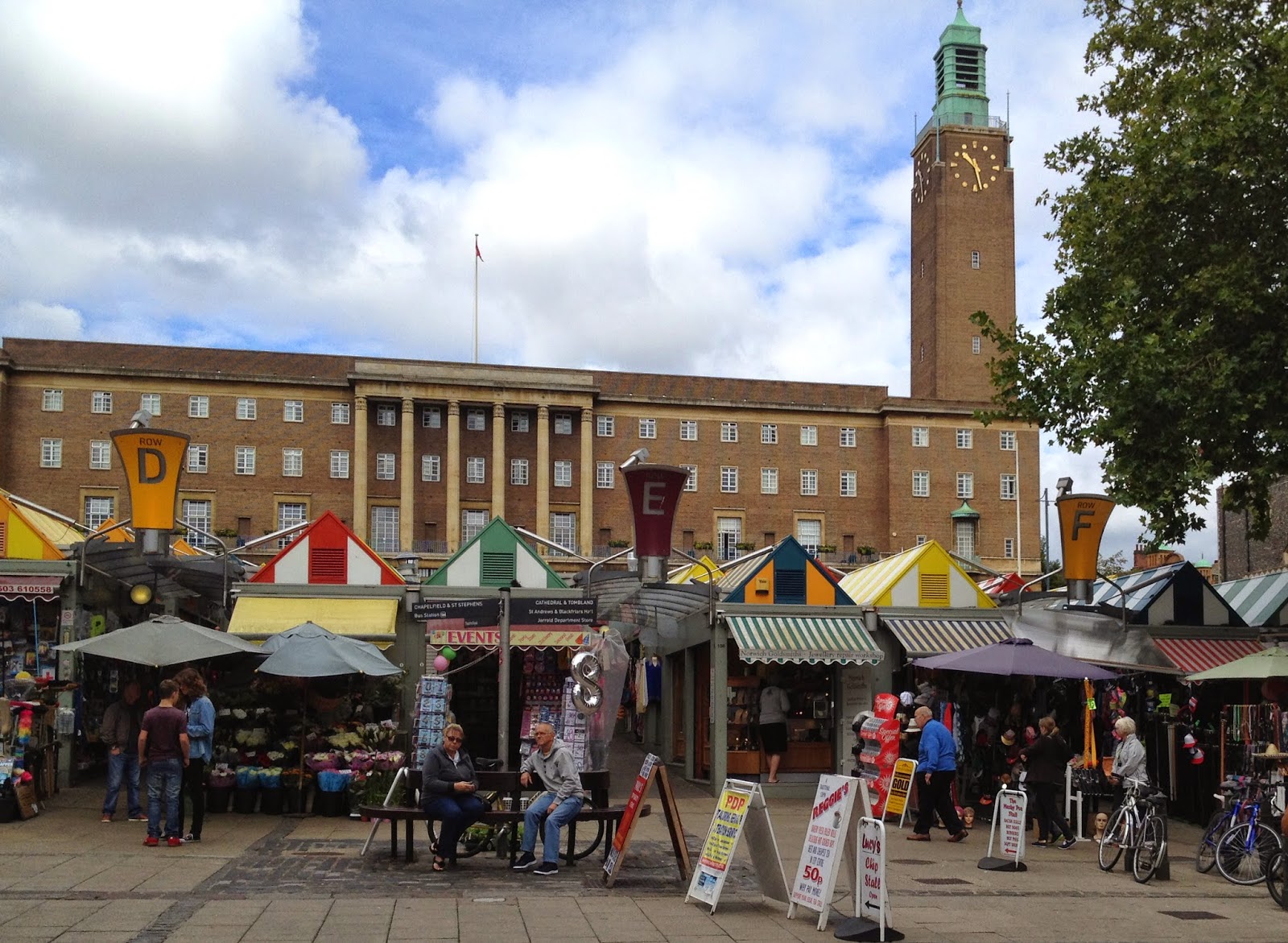 There is a vast choice of food available on Norwich Market, the all day breakfast found at Charlie's was the reason for my visit. 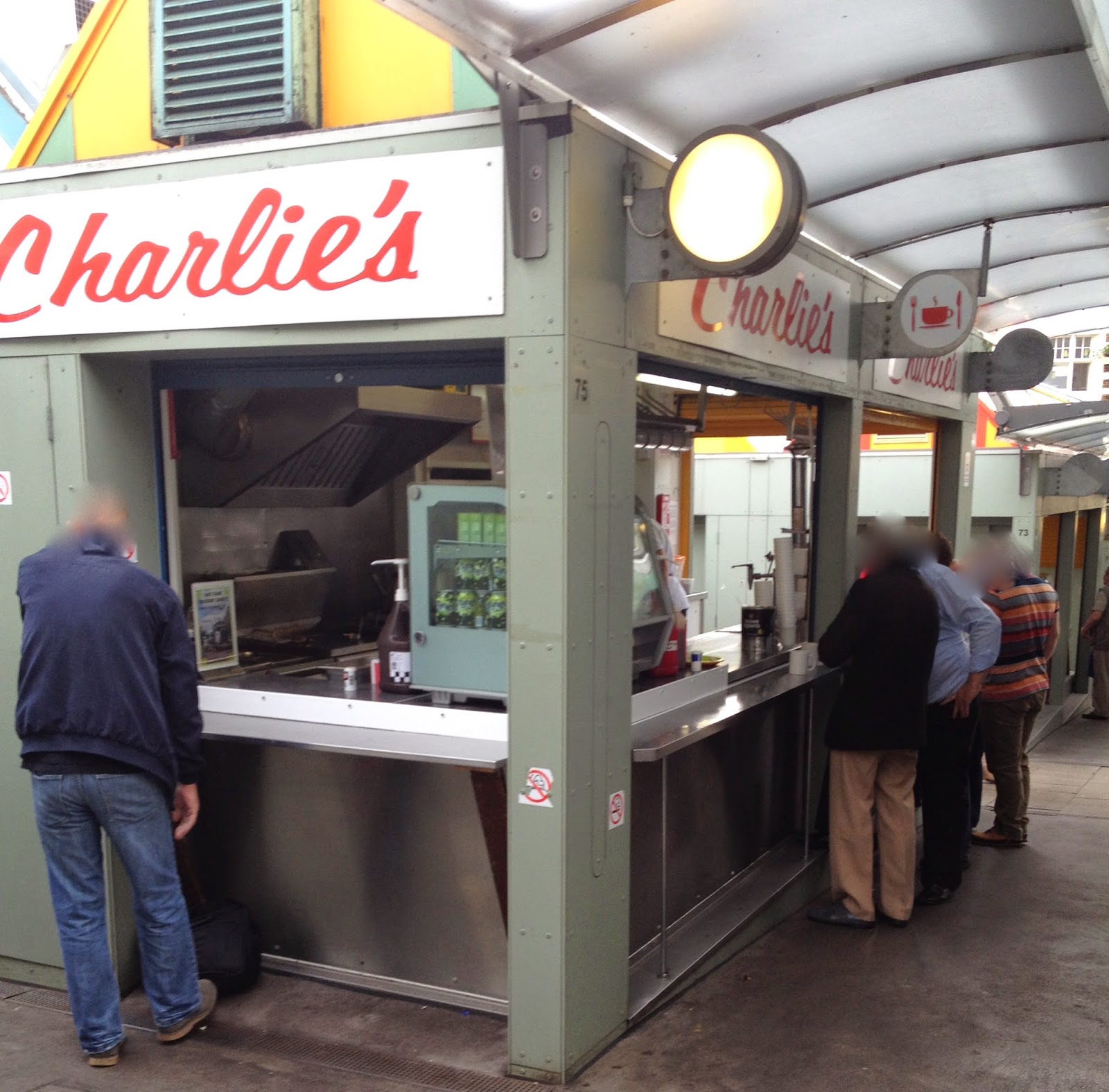 Charlie's is located on row C, fairly close to the back.
This was to be my first fry up inspection where I would be standing. 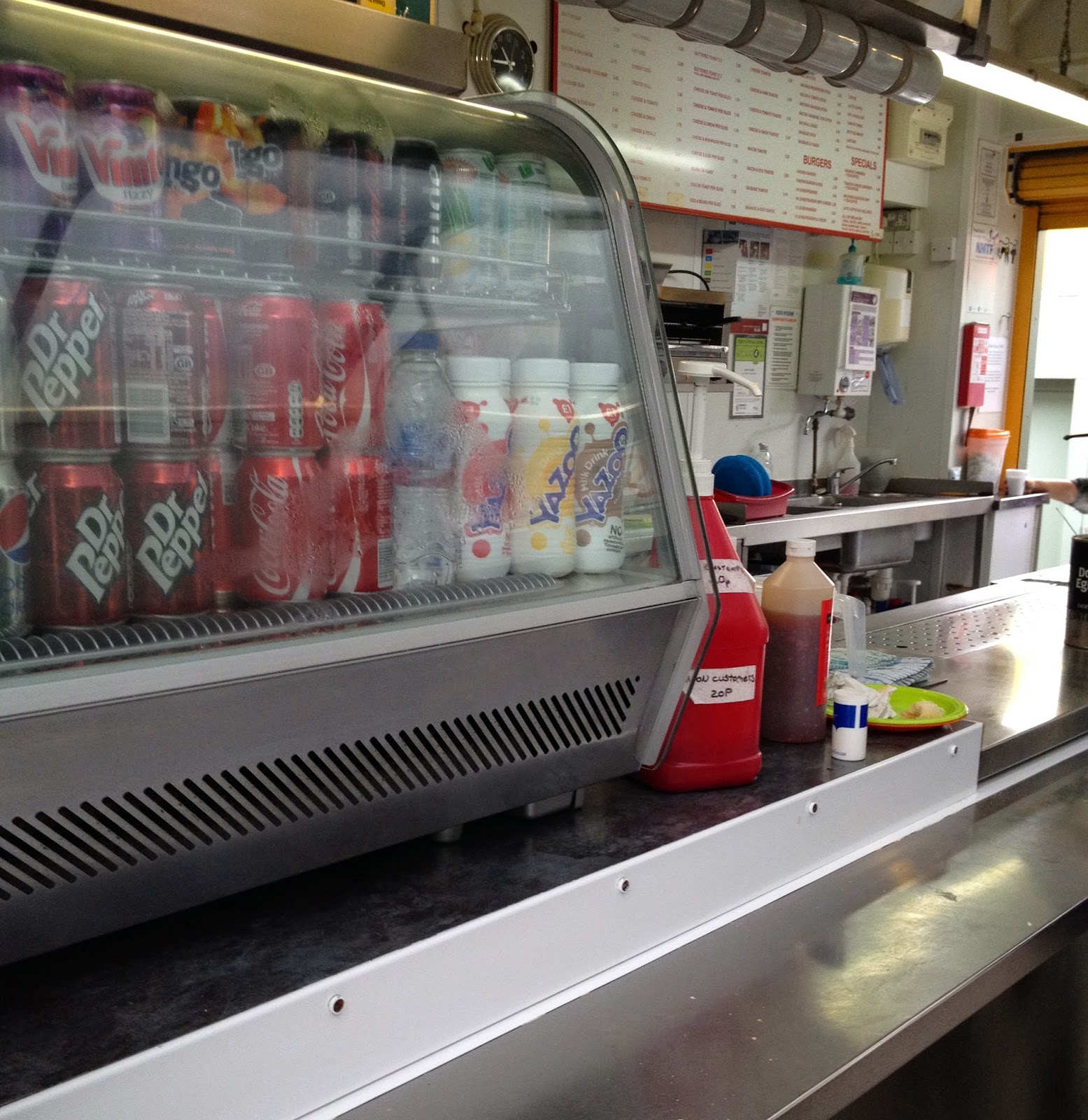 This area is ideal for tea and a bacon roll, for a breakfast on a plate it was fairly tricky though. Never had the plate been so far away before! 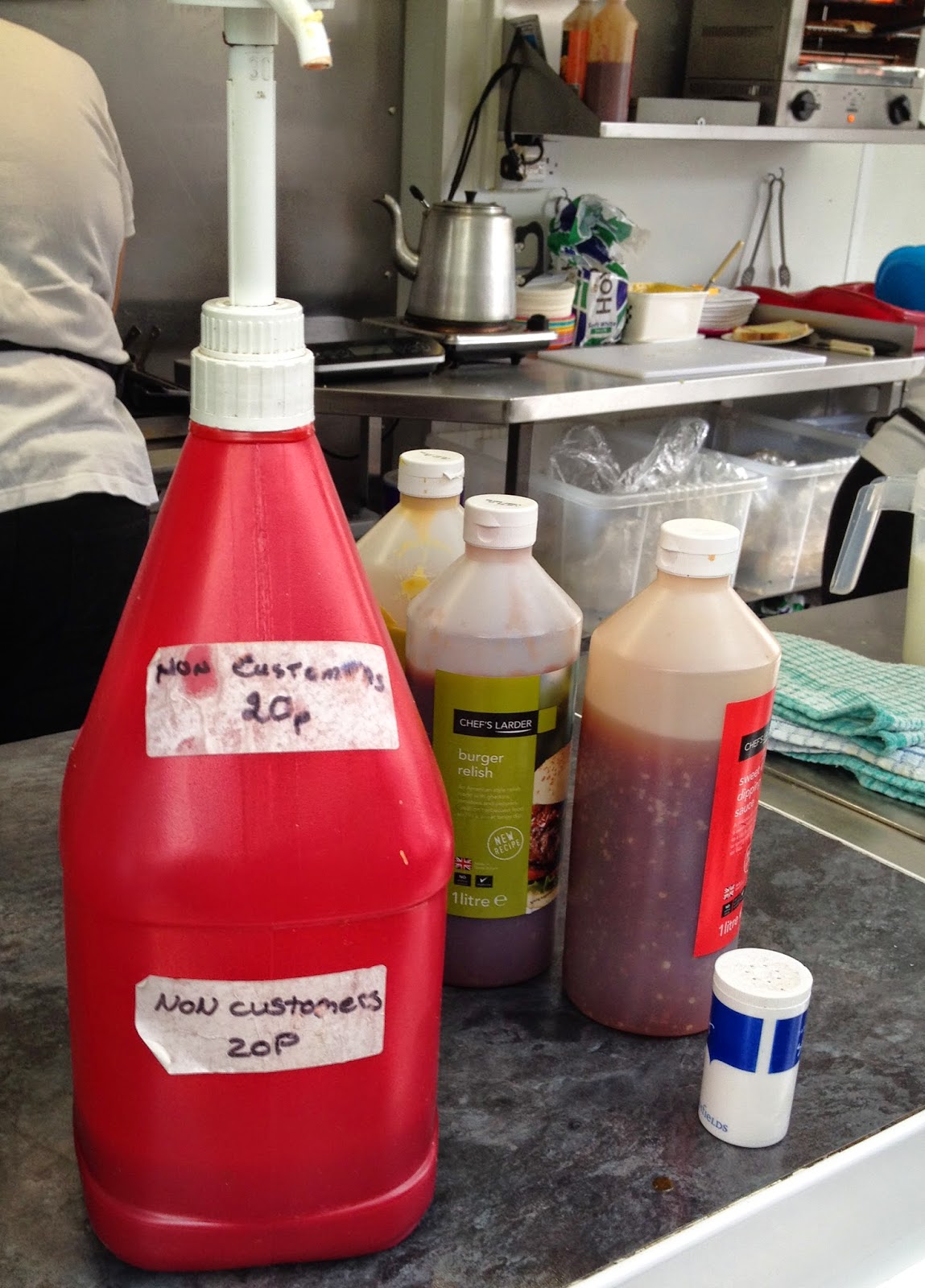 I was a customer so no charge to me! 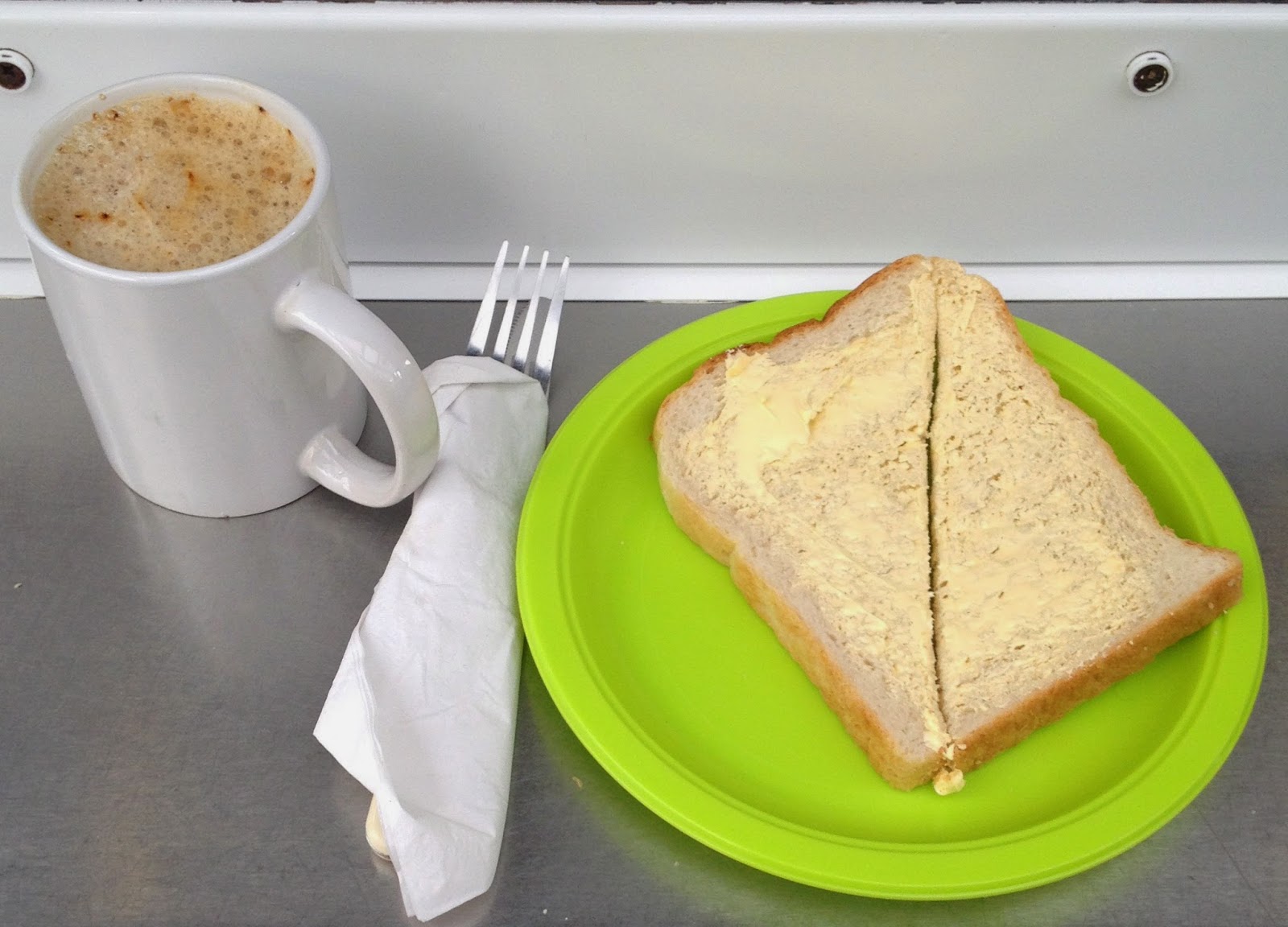 A hot drink and slice of bread came with the all day breakfast. 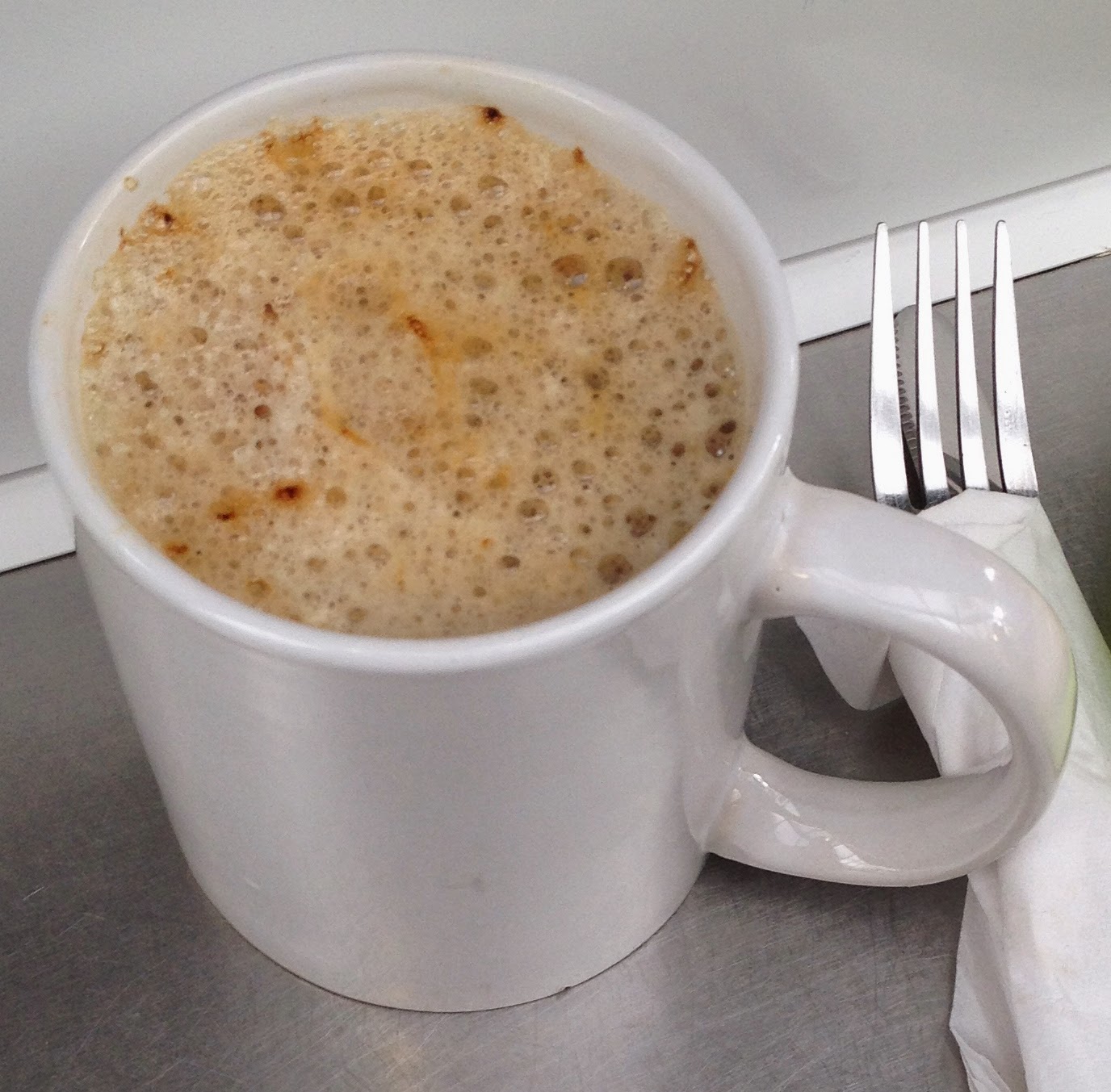 The coffee was Douwe Egberts continental instant, with it's nice frothy head I was happy enough! A soft fluffy white slice of bread with a thick scraping of margarine. 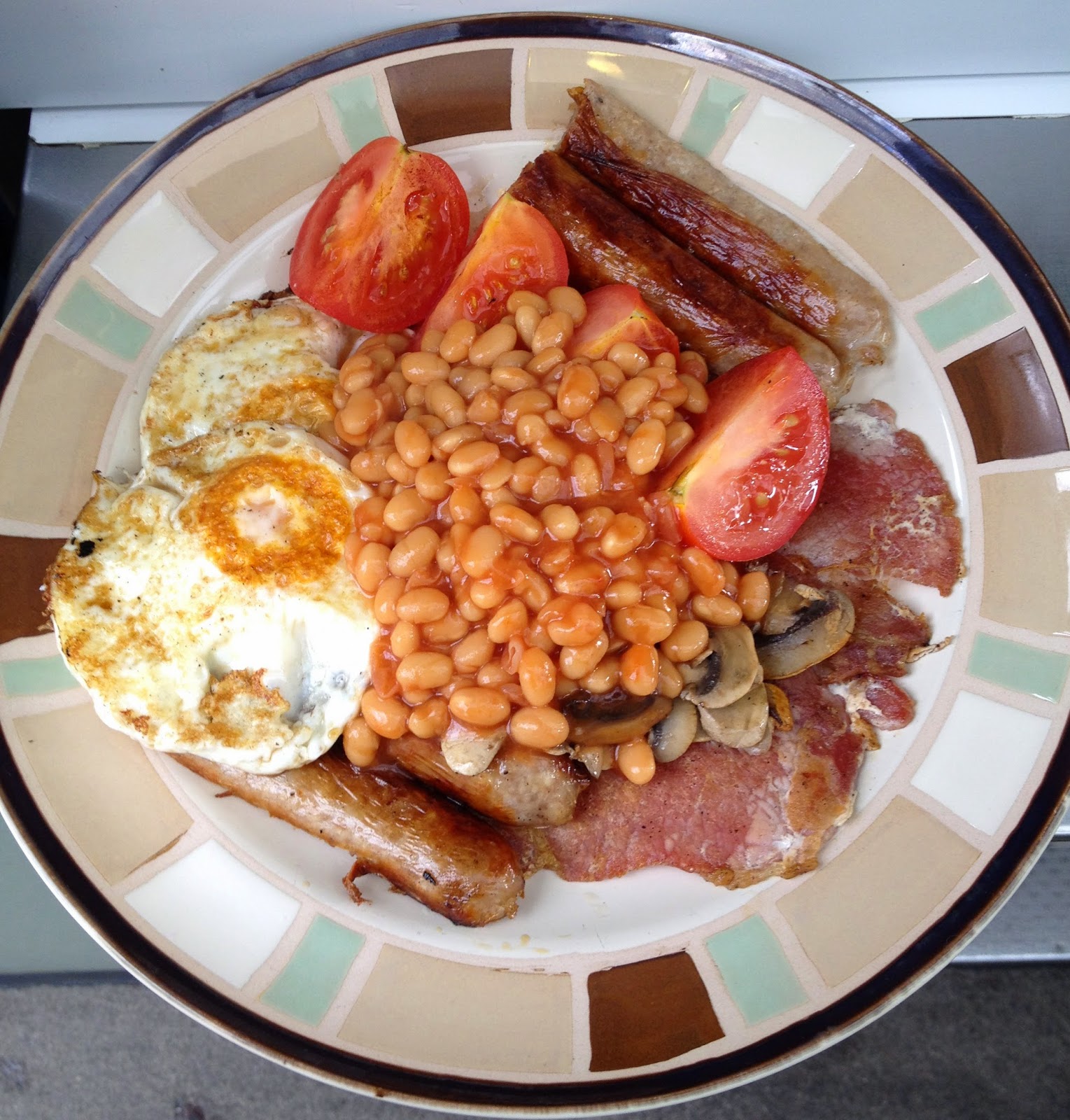 The all day breakfast cost £5 and came on a proper plate. 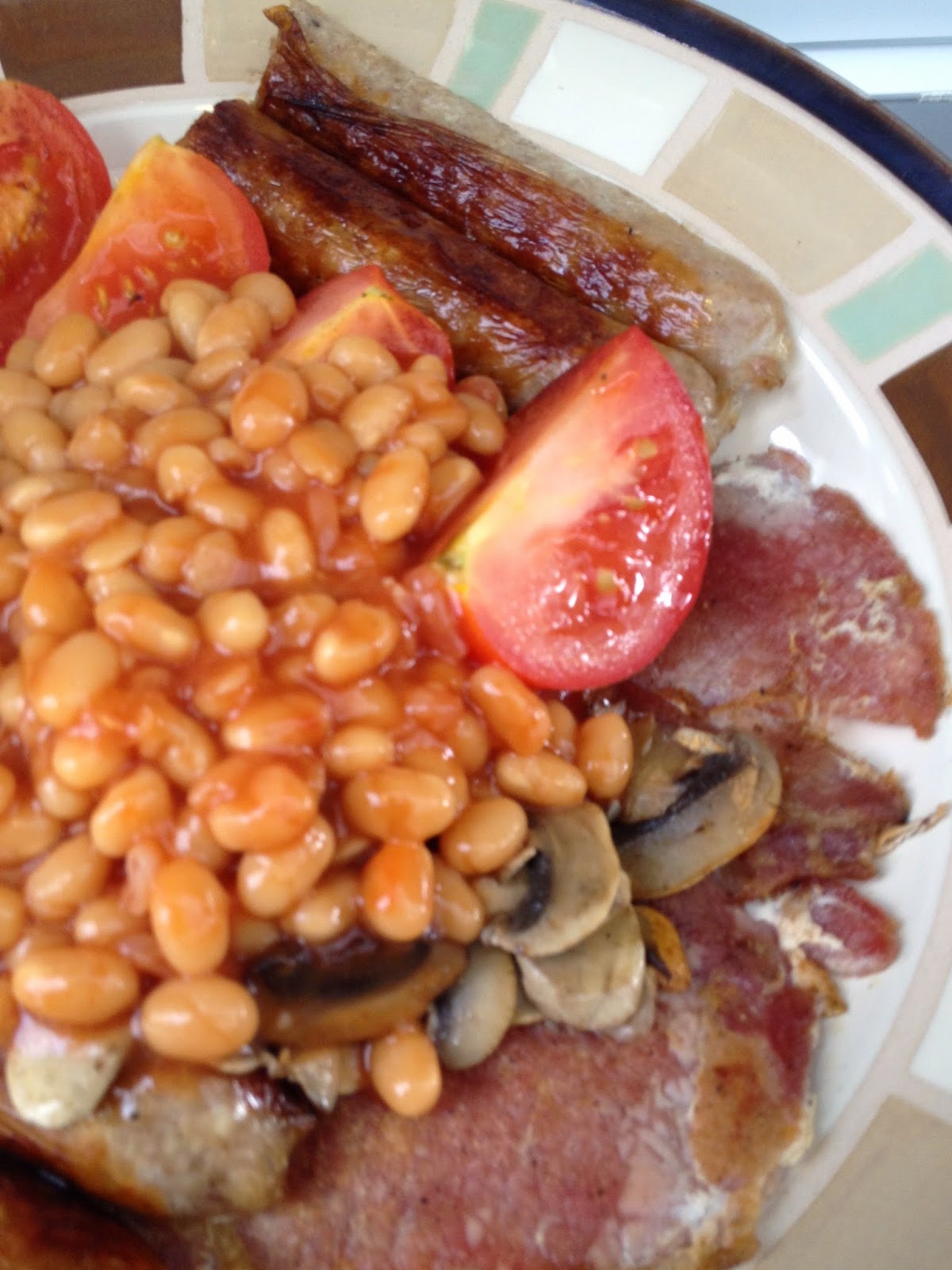 I often complain of tomatoes having no taste, these ones tasted great, they were barely warm though. 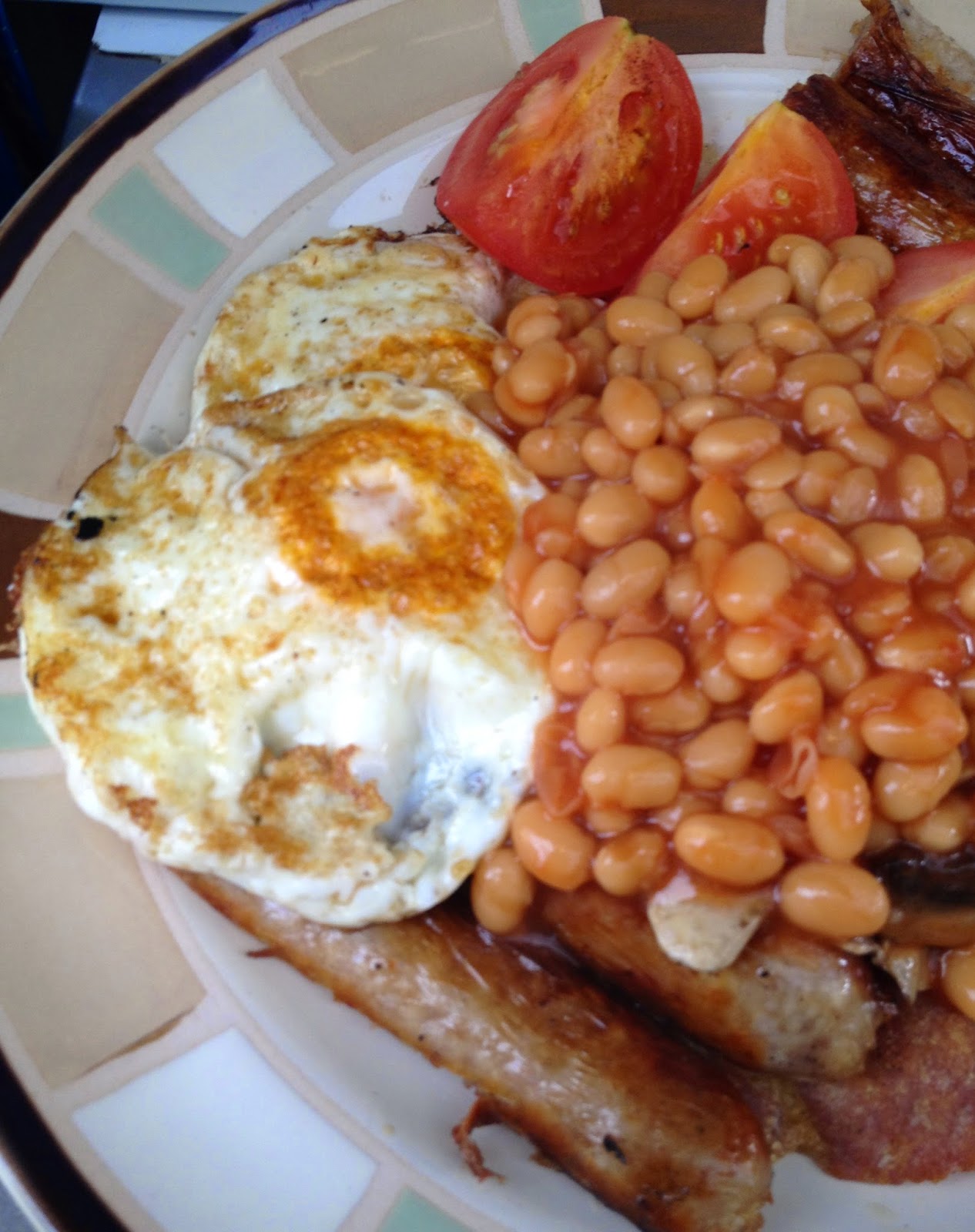 I must be honest and say the eggs didn't really blow me away, they were cooked on a griddle though so I guess flipping was the only option. I had my fingers crossed that the yolks would be nice and runny. 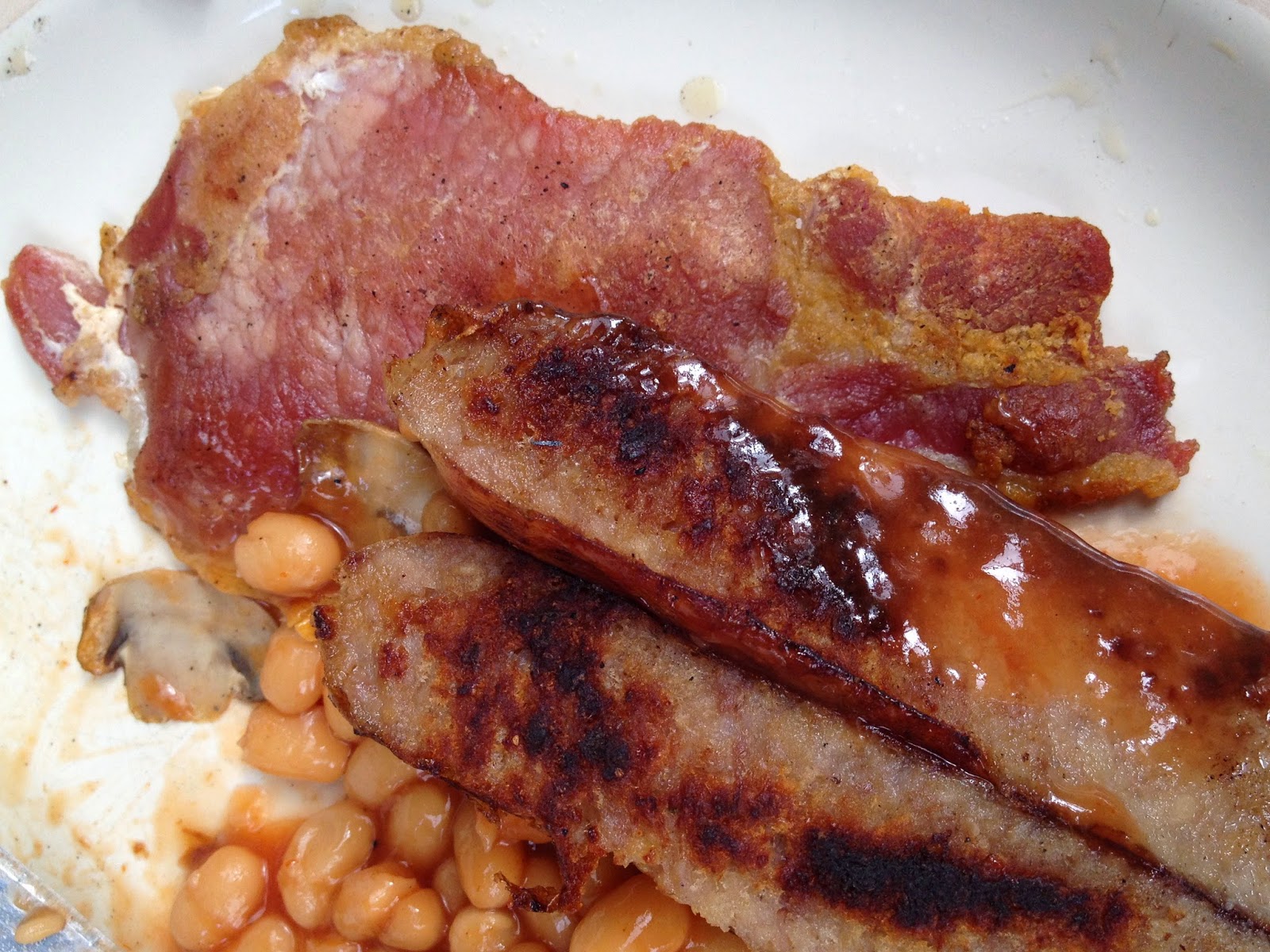 If you like your bacon overcooked and tough as old boots this place is for you. The sausages are cut in half and split before hitting the griddle. 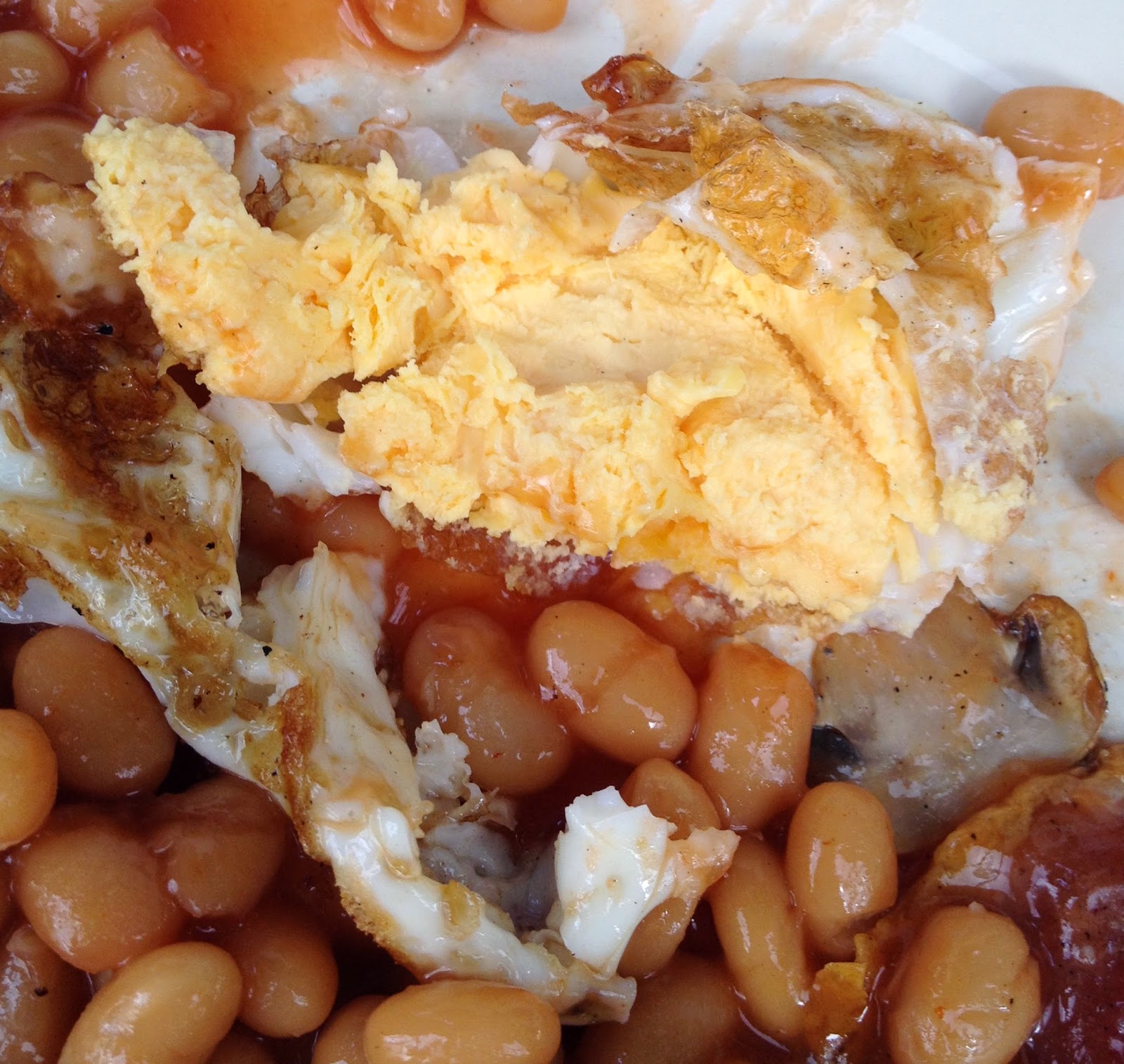 So much for crossing my fingers, the yolks were solid..


I have so many memories of Norwich Market since moving to Norwich in 1987. I recall drinking cider with Norwich Punks nearby at the taxi rank and walking through the market quite drunk to use the toilets. There was a chap (maybe still there) called Andy on the Leather stall on the back row, he would take photos of the Punks and Psychobilly's and sell them as greeting cards for £1. For nearly two decades Norwich Market provided me with discount tobacco, fish food and cheap suitcases. I used to eat cod and chips each week from the chippy in the centre, if I didn't have much money I would go for a pie and mushy peas on the pea stall. I only ever really visit the Market these days to buy an occasional whippy ice cream with a flake. Something recently was calling me back and making me curious though. Back in April I received an email informing me that Charlie's on Row C were serving the best fry up in the city. Having eaten so many of Norwich's finest breakfasts (found here) I had serious doubts about this claim but decided to visit Charlie's to see what all the fuss was about..

Upon entering - I didn't actually enter Charlie's and neither did I take a seat being it was a market stall, this was perfectly fine though and was exactly what I was expecting. There is a large menu displaying what is on offer, simply tell the person serving what you would like. There is a surface for you to place your food and drink on at the edge of the stall. This is great if you have a bacon roll and mug of tea, I found eating a plate of food from it was not too easy though and never had the plate been so far from my mouth! Salt, pepper and sauces are all within easy reach at the front of the stall, the cutlery is handed to you wrapped in a serviette. When the food is ready it is handed over to you and when you have finished you pay at the end. There was a great atmosphere on the stall with plenty of banter going on, this does kind of make up for the slightly uncomfortable angle you have to eat at from the plate. 6/10

Service - The two ladies working on the stall were really friendly and down to earth, I liked this a lot. My order was taken and I was offered a hot drink, I was even asked how many sugars I take and presented with the coffee already sugared. The fact I wasn't asked for the payment until the very end showed a good sense of trust. I was greeted with a smile and made to feel welcome, other customers included me in their banter. This kind of environment is quite priceless and a real joy to surround yourself in. 9/10

Presentation - To be honest the placement of the items was quite different to most breakfasts I had been served, the beans covering everything on the plate. The tomatoes looked very undercooked, the meat looked overcooked and the eggs were looking a tad sorry for themselves. I reminded myself that everything had been cooked on the griddle though so presentation was going to be a bit of an issue. I was expecting it may have arrived in a polystyrene box but was nicely surprised when it arrived on a plate. 4/10

The food - What looked at first glance to be four sausages was in fact one huge jumbo sausage cut in half and split down the middle, it was cooked both sides and tasted quite bland. A fairly cheap sausage but a bit of firmness in the texture made it reasonably acceptable. The bacon was so overcooked it is difficult to say much other than it was a bitch to cut through. The eggs were crispy both sides with a solid yolk, I guess they needed flipping on the griddle but a hastier exit onto the plate may have resulted in a softer yolk scenario. The mushrooms were sliced and fairly tasty but the tomatoes were barely cooked at all, they were at least full of flavour though. There were plenty of piping hot beans and a slice of bread with a thick scraping of margarine. 4/10

Value for money - The all day breakfast cost £5 and included a slice of bread and a hot drink. A good price but not a particularly good breakfast. 5/10

Overall - The breakfast was pretty much what I was expecting for the price. Nothing fancy and obvious presentation issues are inevitable when using just a griddle. With decent butchers sausages available on neighbouring stalls I did briefly wonder why these were not being used. This is Norwich market though, home to a vast selection of affordable places to eat, customers swarm here daily for breakfast or lunch and this is the way they like it. What the breakfast lacked in here was certainly made up for in the welcoming service and friendly market banter. 6/10