Breakfast served
Monday to Saturday
9.00am till 11.00am The banner outside had caught my eye a few weeks ago. 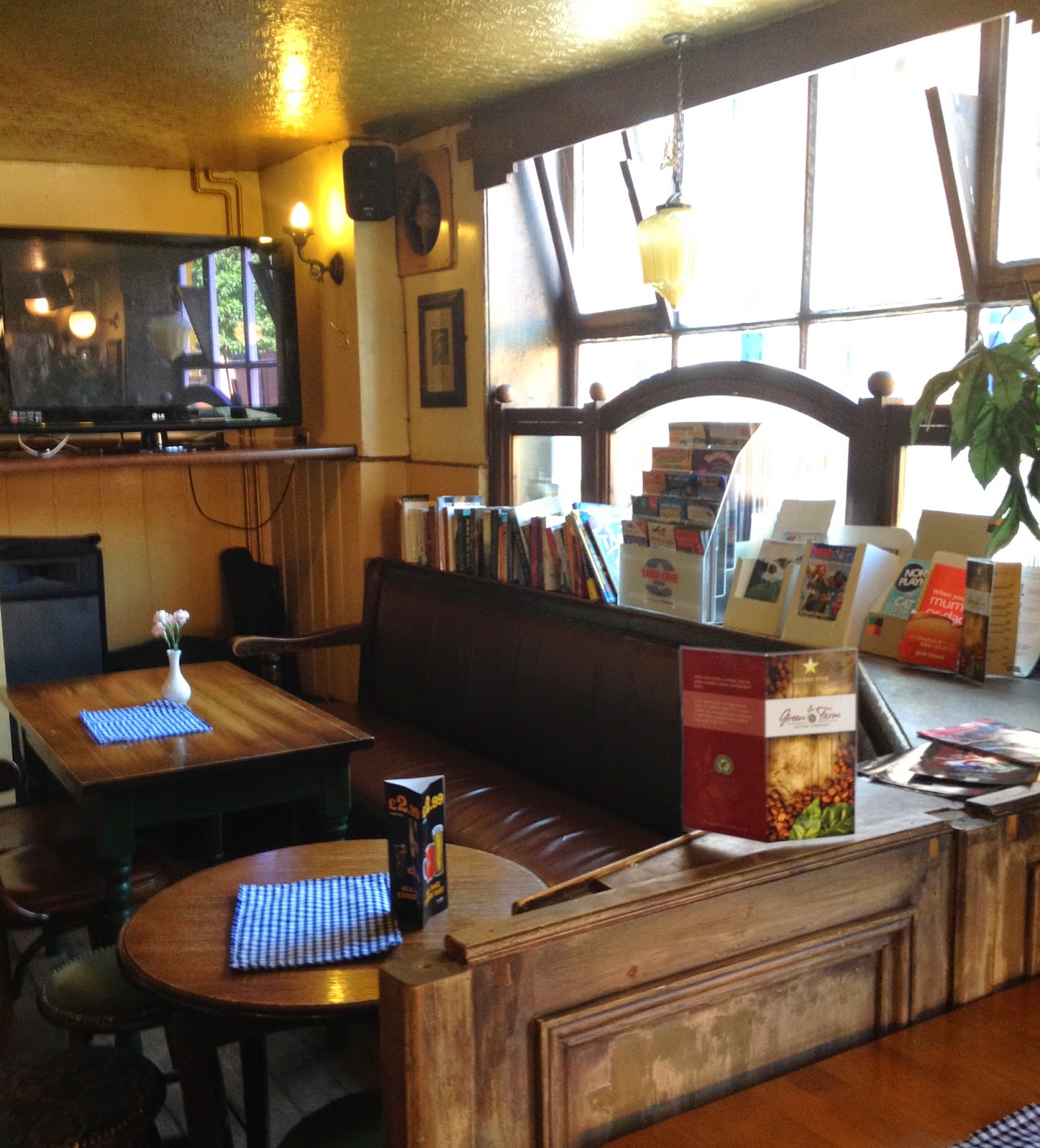 Golden Star has a very traditional and welcoming feel to it. 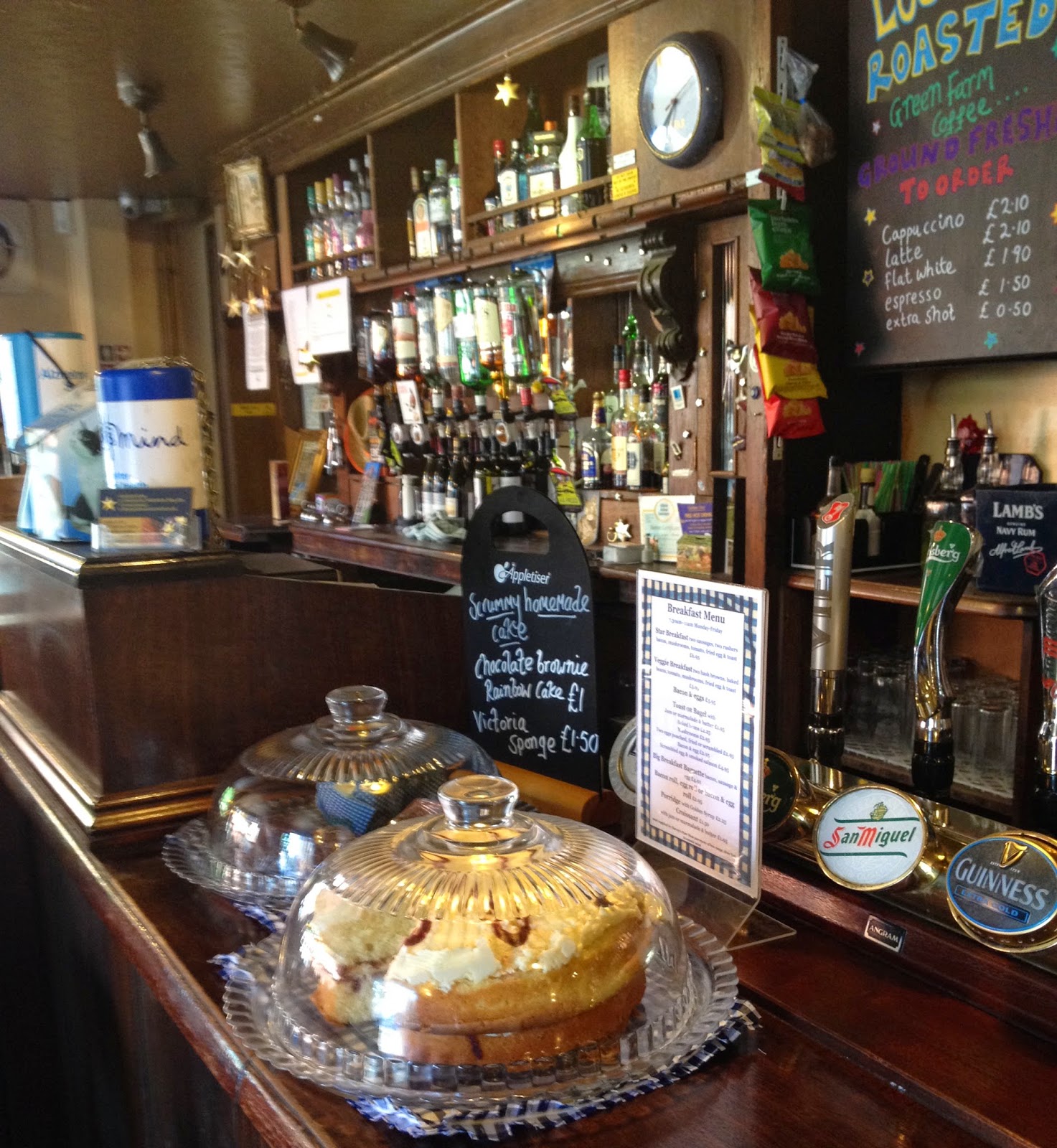 The Victoria sponge was very tempting but the breakfast menu sat behind it was the reason I was here. 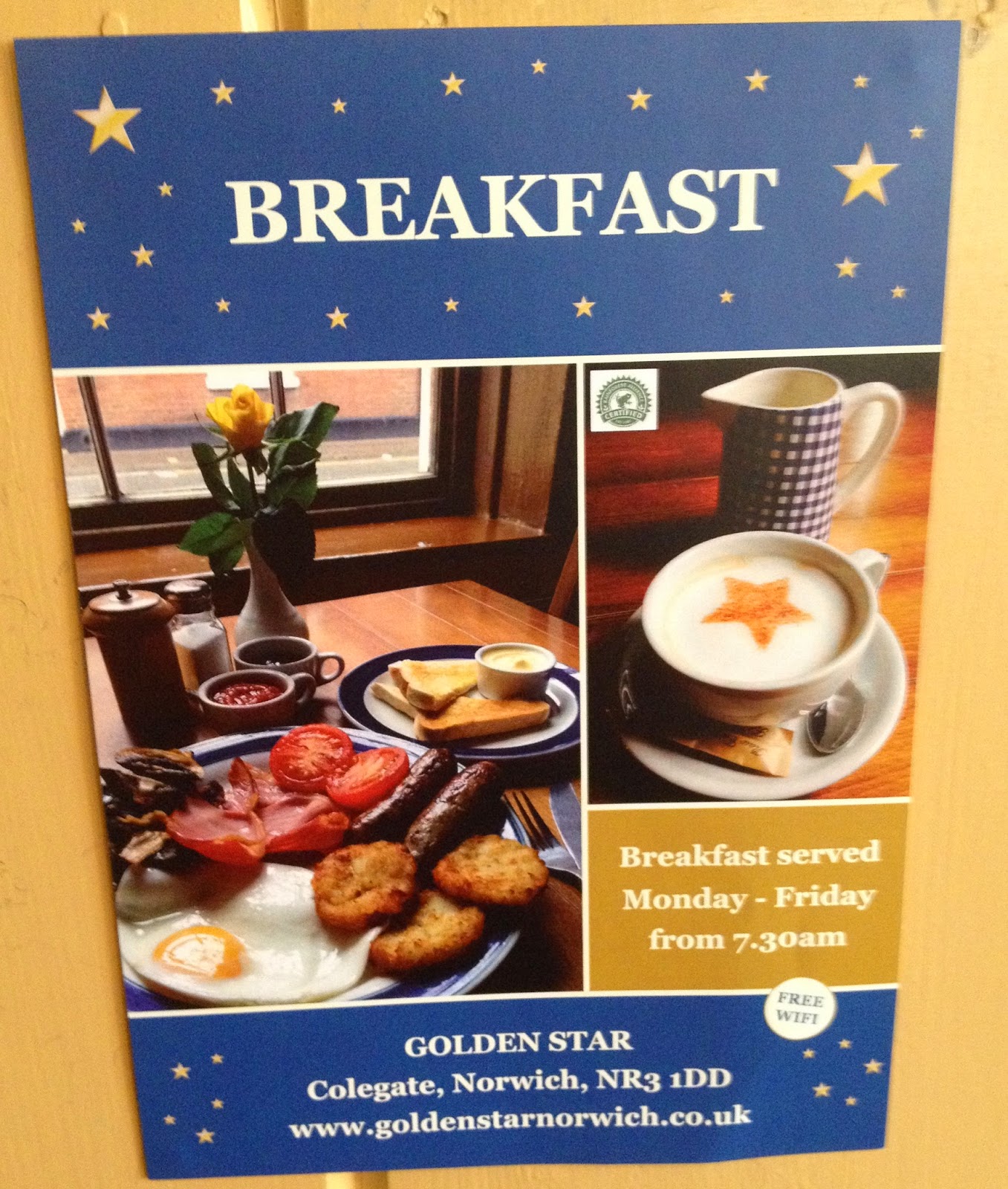 The breakfast looked good in the photo, did the cappuccino really come with a star on top though? 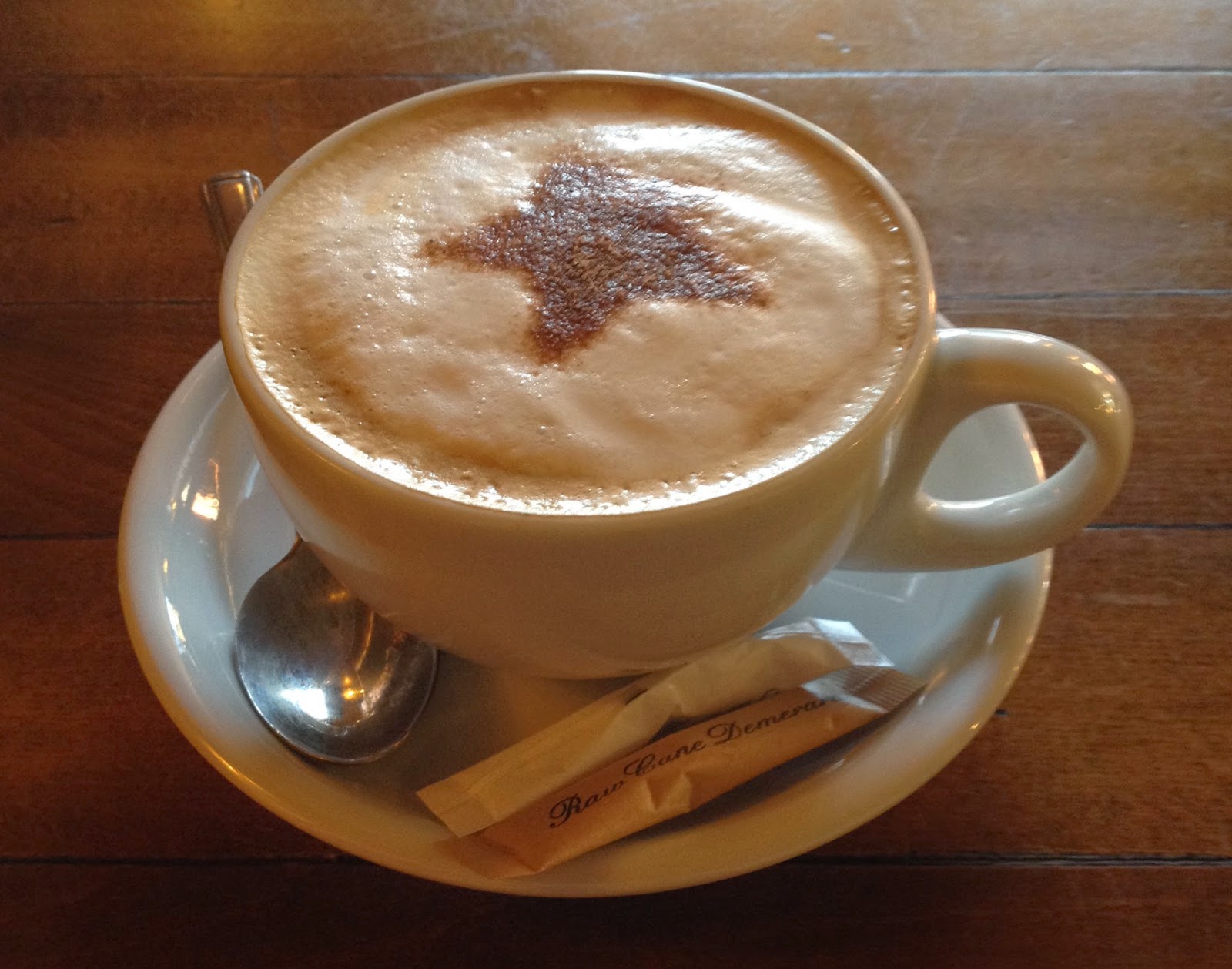 It certainly did and it also came free with the breakfast! 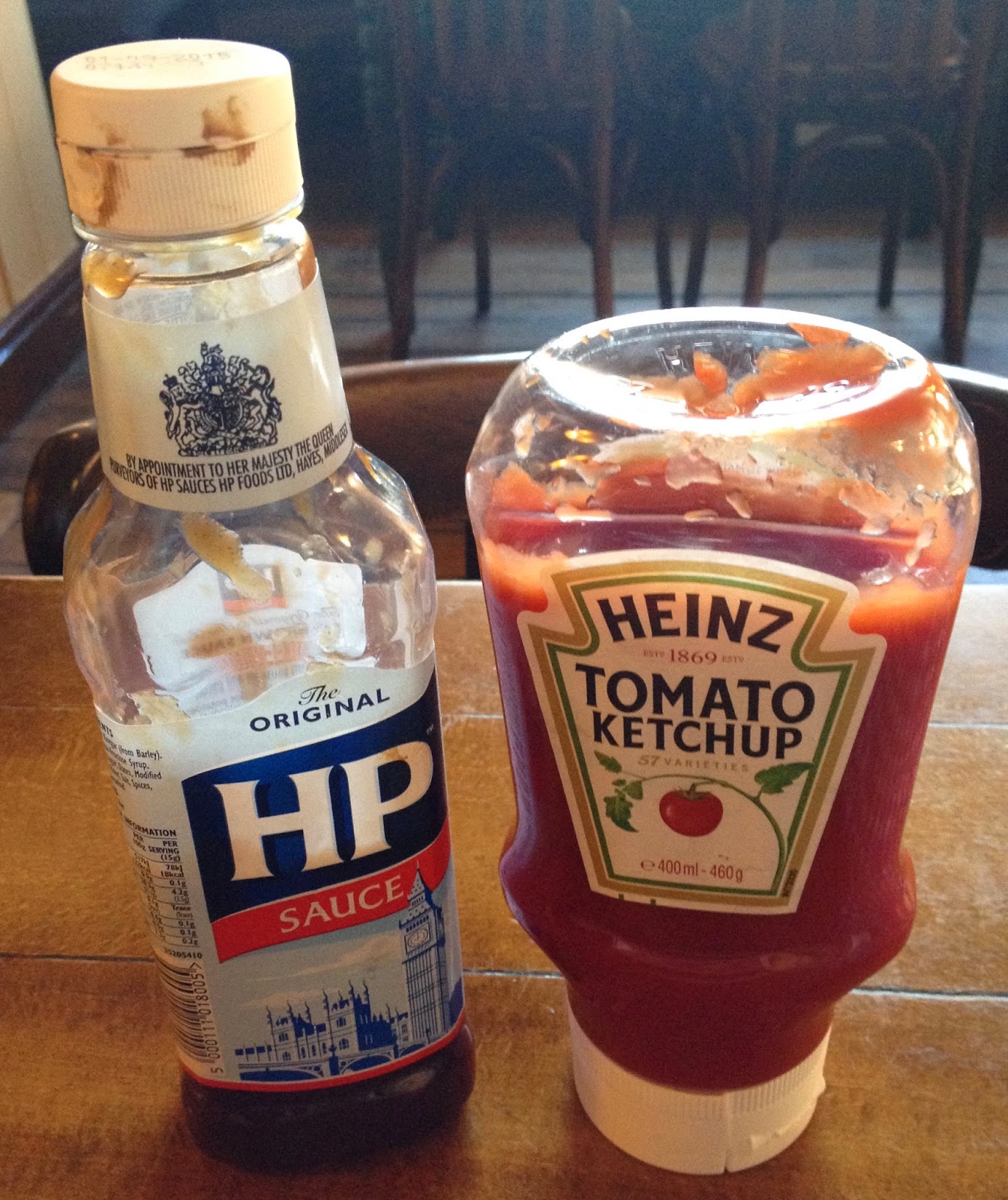 HP and Heinz sauces but I didn't encounter any salt or pepper, these are possibly available on request though. 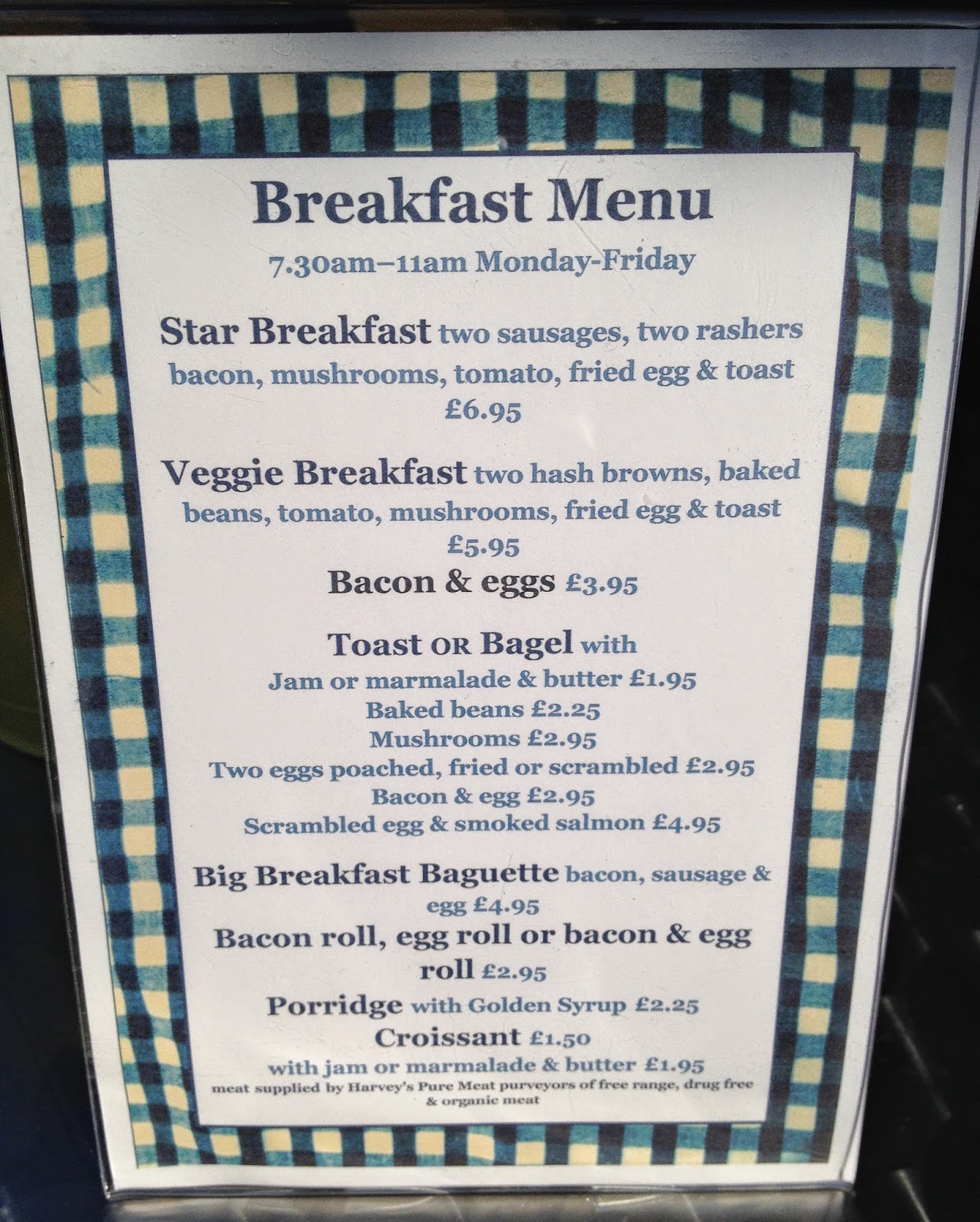 A good breakfast selection on the menu including a veggie breakfast, not a veggie sausage to be seen anywhere but it does at least include beans. 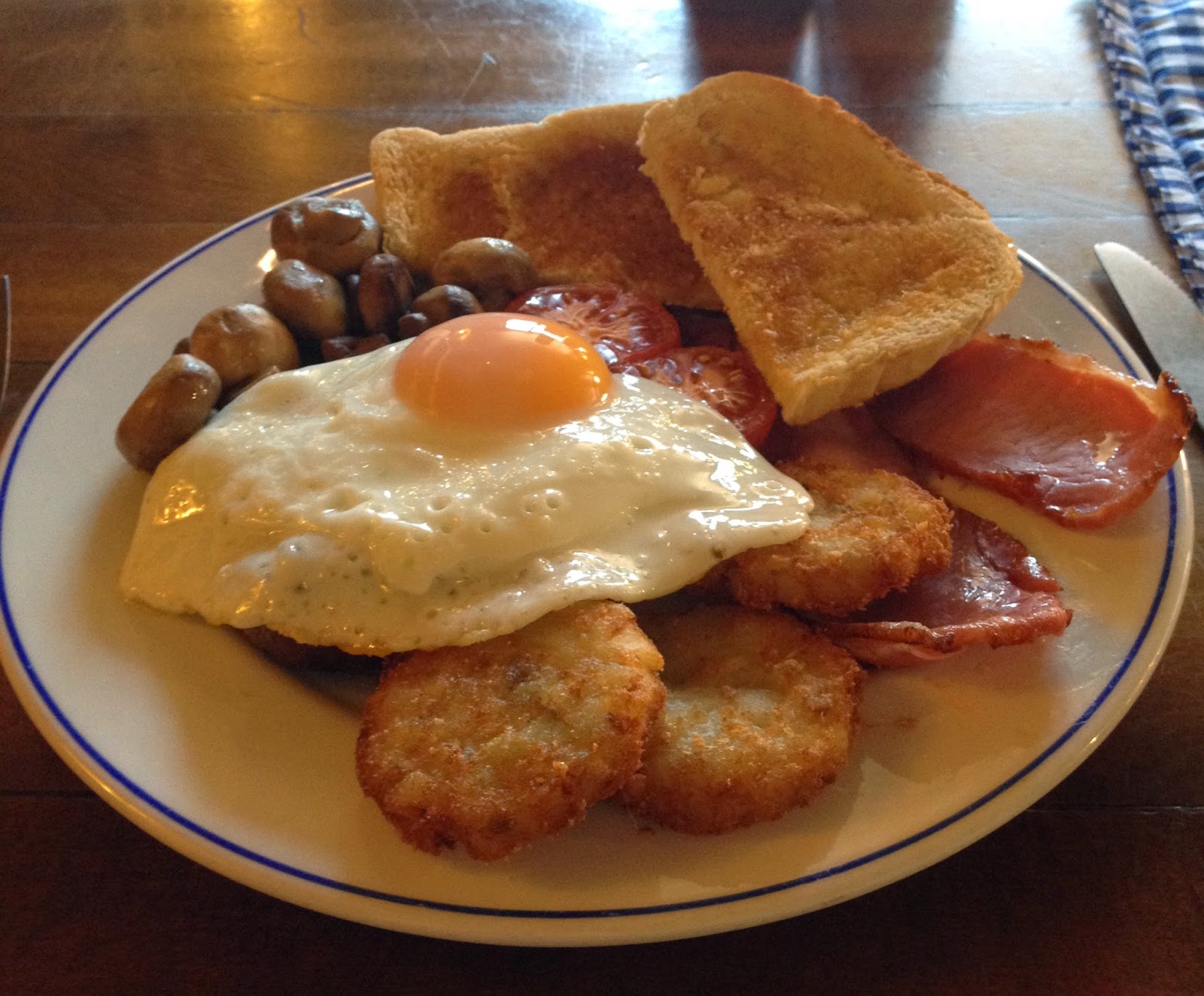 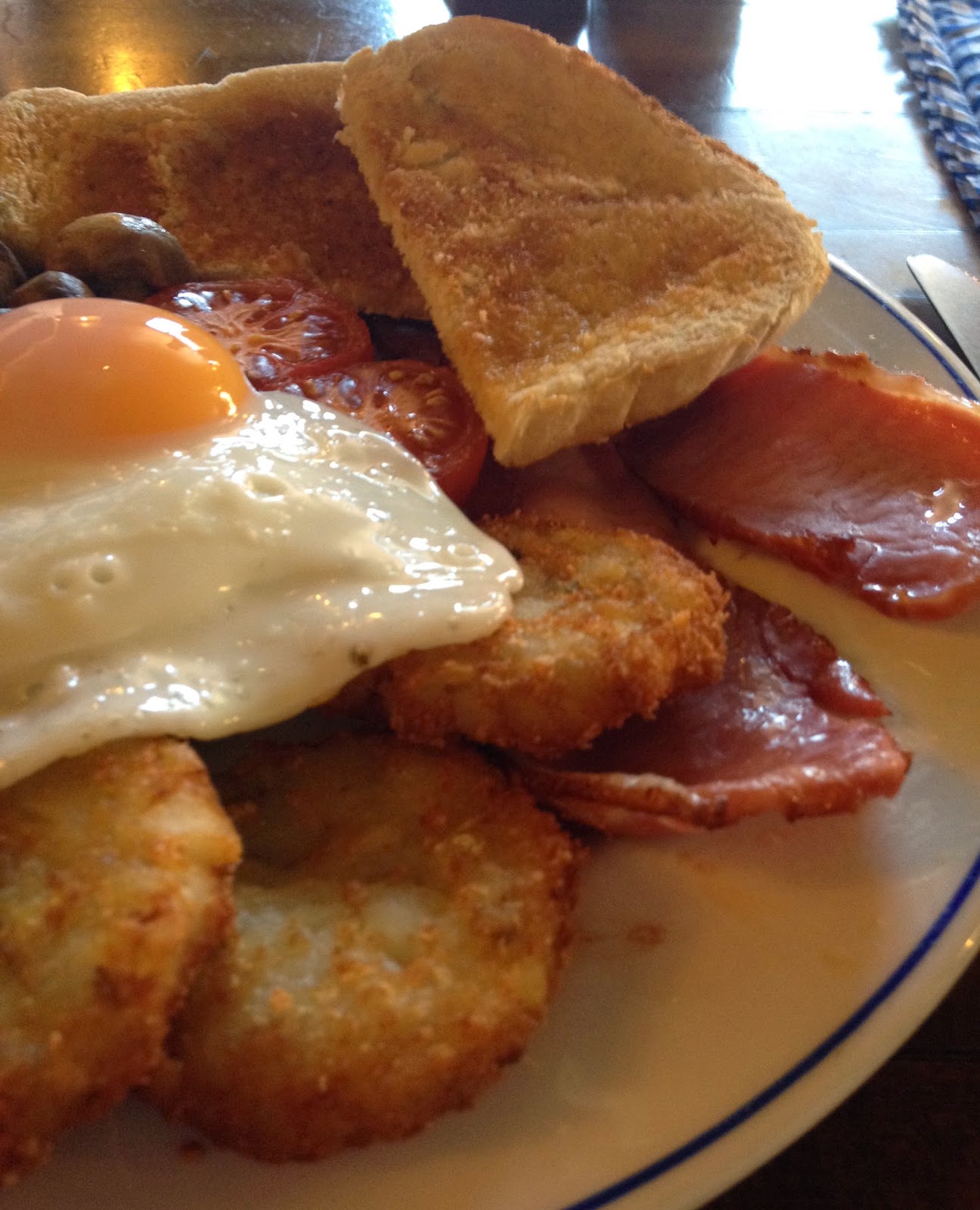 The hash browns were an unexpected bonus! 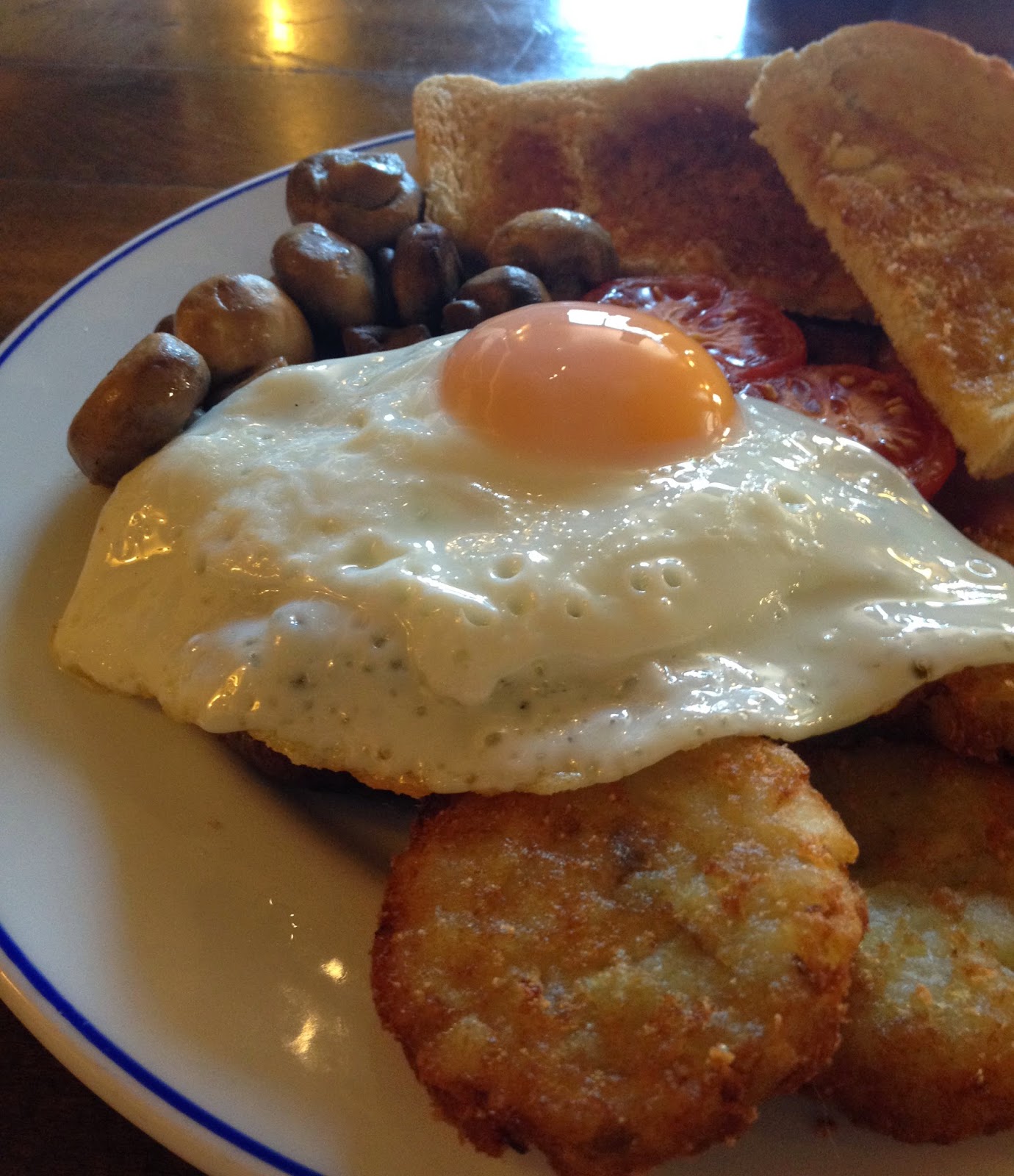 A decent fried egg, plenty of mushrooms and tasty tomatoes. 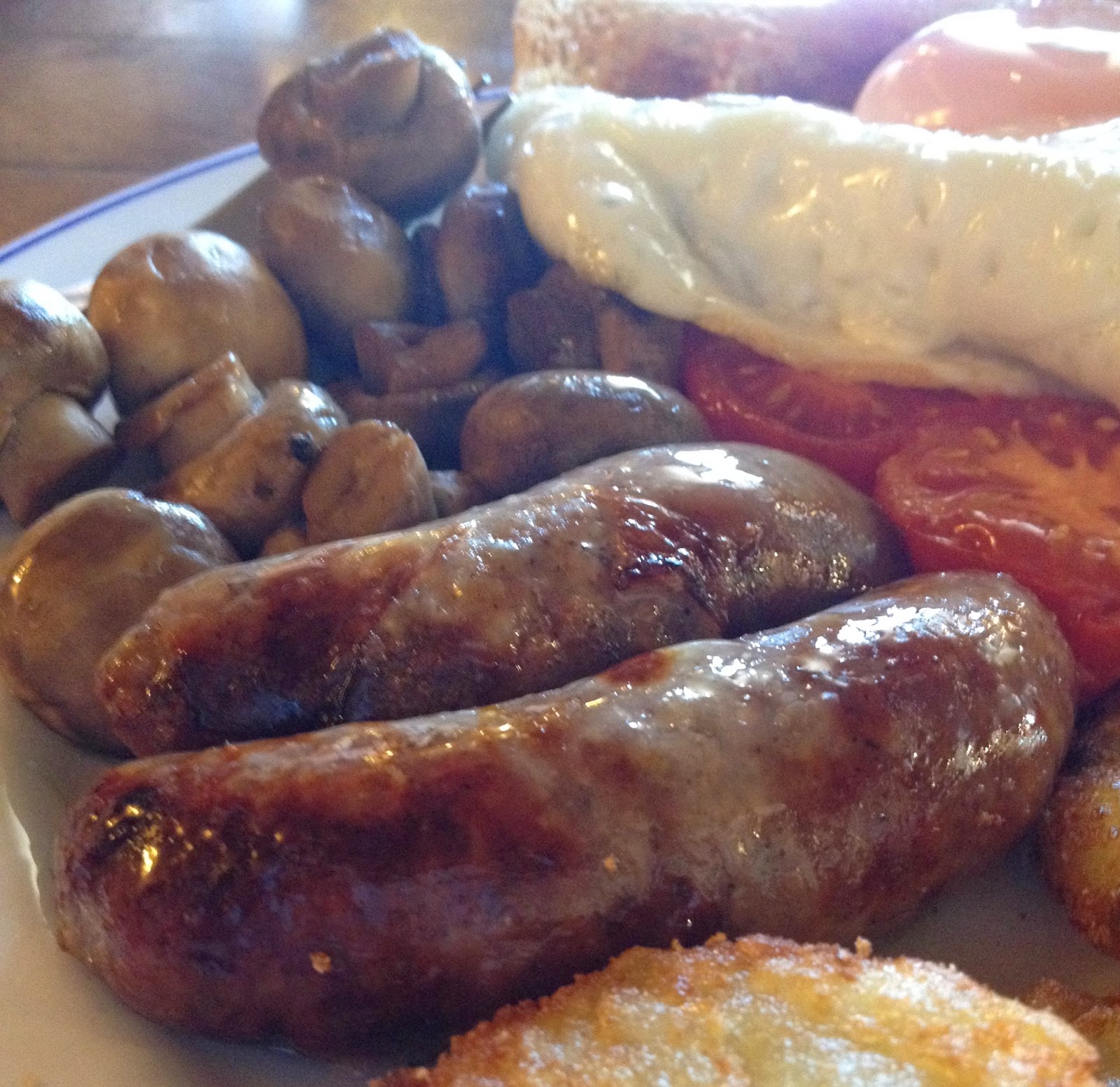 A tasty pair of Harvey's sausages could be found underneath the fried egg.

The only way I was going to visit the Golden Star was to go before work as they were doing breakfasts on weekdays only. It meant getting up an hour earlier but I was up for it, to give me more time I parked on Colegate knowing I could get to work within ten minutes of leaving the pub. It was a lovely sunny day and even at 7.30am the temperature was rapidly rising, I thought briefly about sitting outside but decided to head inside for a better look..

Upon entering - I had been in the Golden Star on the odd occasion in the past but usually during the evening enjoying a cider or vodka. I walked in and stood at the bar, nobody was there at first so it was a perfect opportunity to get some photos. It has a homely and traditional pub interior with plenty of character and although fairly small there are plenty of places to sit and eat. There was a breakfast menu on the bar beside some homemade chocolate brownies and Victoria sponge, both looked delicious! Simply place your order and pay at the bar, choose where to sit and wait for everything to arrive. Sauces and cutlery will be brought over to the table before the food arrives, not sure about salt and pepper but probably available if you ask for it. Read a newspaper with your coffee whilst waiting for the food to arrive, it is certainly a nice relaxing environment at this time of the morning. 8/10

Service - I was greeted with a smile as somebody appeared from behind the bar which was a nice welcome. I asked for the the Star breakfast and was told a hot drink is also included in the price, this was an unexpected bonus and not mentioned on the breakfast menu, nice! The cappuccino arrived at the table first and I was offered a selection of newspapers to read. Next the sauces and cutlery arrived along with a serviette, shortly after that the food arrived. Throughout my visit the service was really friendly and I was made to feel very welcome which always makes a massive difference and is crucial to an enjoyable breakfast experience. 9/10

Presentation - As soon as I spotted the dusted star on top of the cappuccino I suspected the breakfast was going to look the part when it arrived and it didn't disappoint.  The sausages were hiding under the egg and the lack of beans was a rare sight but everything looked nicely cooked and sat together well on the plate. 7/10

The food - The plate was piping hot when it arrived ensuring the food was too. The meat supplied by Harvey's was excellent, thick and delicious rashers of bacon and a pair of really meaty sausages with a really good firm texture and devine flavour. The fried egg was cooked beautifully with no runny egg white but a perfect runny yolk, I layed this over the hot buttered toast and let the yolk absorb in to it. The hash browns were fairly standard along with the mushrooms, both were nicely cooked though and the tomatoes nicely rippened and full of flavour. 8/10

Value for money - £6.95 for the Star breakfast seemed a fair price but the fact it includes a hot drink and hash browns (neither mentioned on the menu) make it quite a bargain! 8/10

Overall - An impressive breakfast is being served at the Golden Star that represents great value for money, especially as the price includes a hot drink too! Friendly service and a warm welcome makes the Golden Star a pub that is well worth visiting. They only serve breakfast on weekdays but with them open from 7.30am why not do as I did and stop by there on the way to work. I like beans with my breakfast and they would have made a great addition but even without them still a great breakfast! 8/10 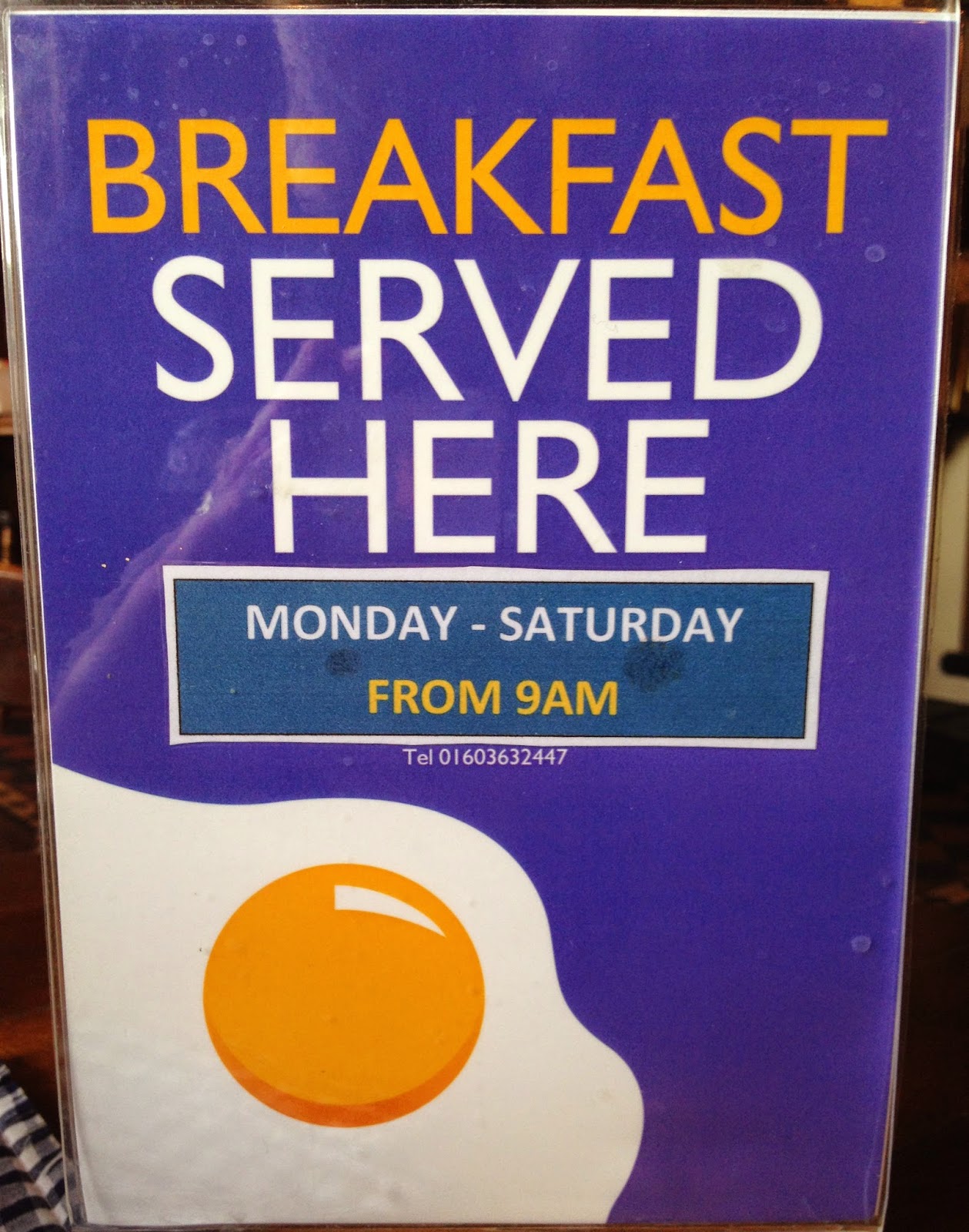 Breakfast is now served on Saturday too. 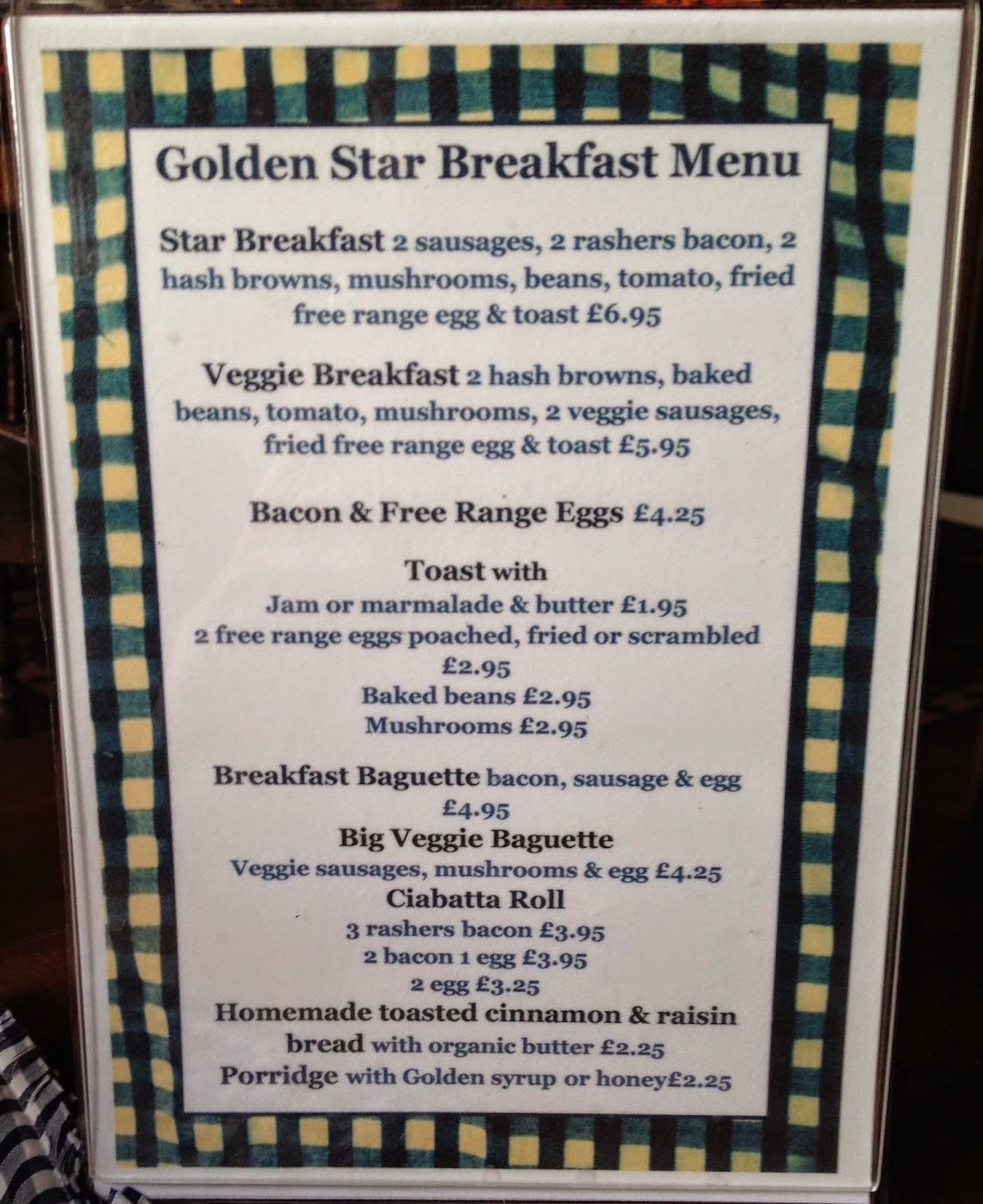 Beans are now included on both breakfasts, a hot drink is no longer included in the price now though. 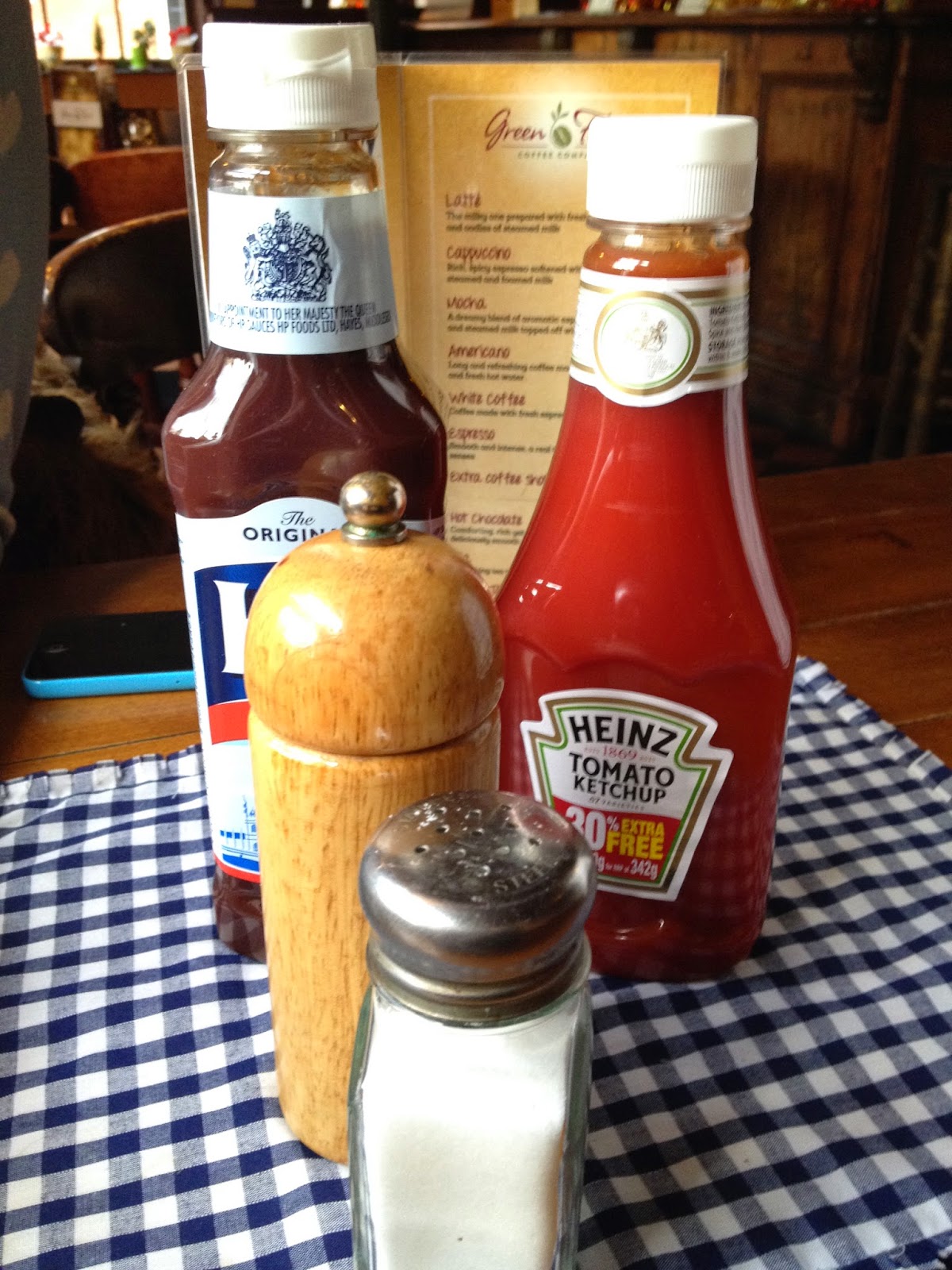 Salt and pepper was on each table. 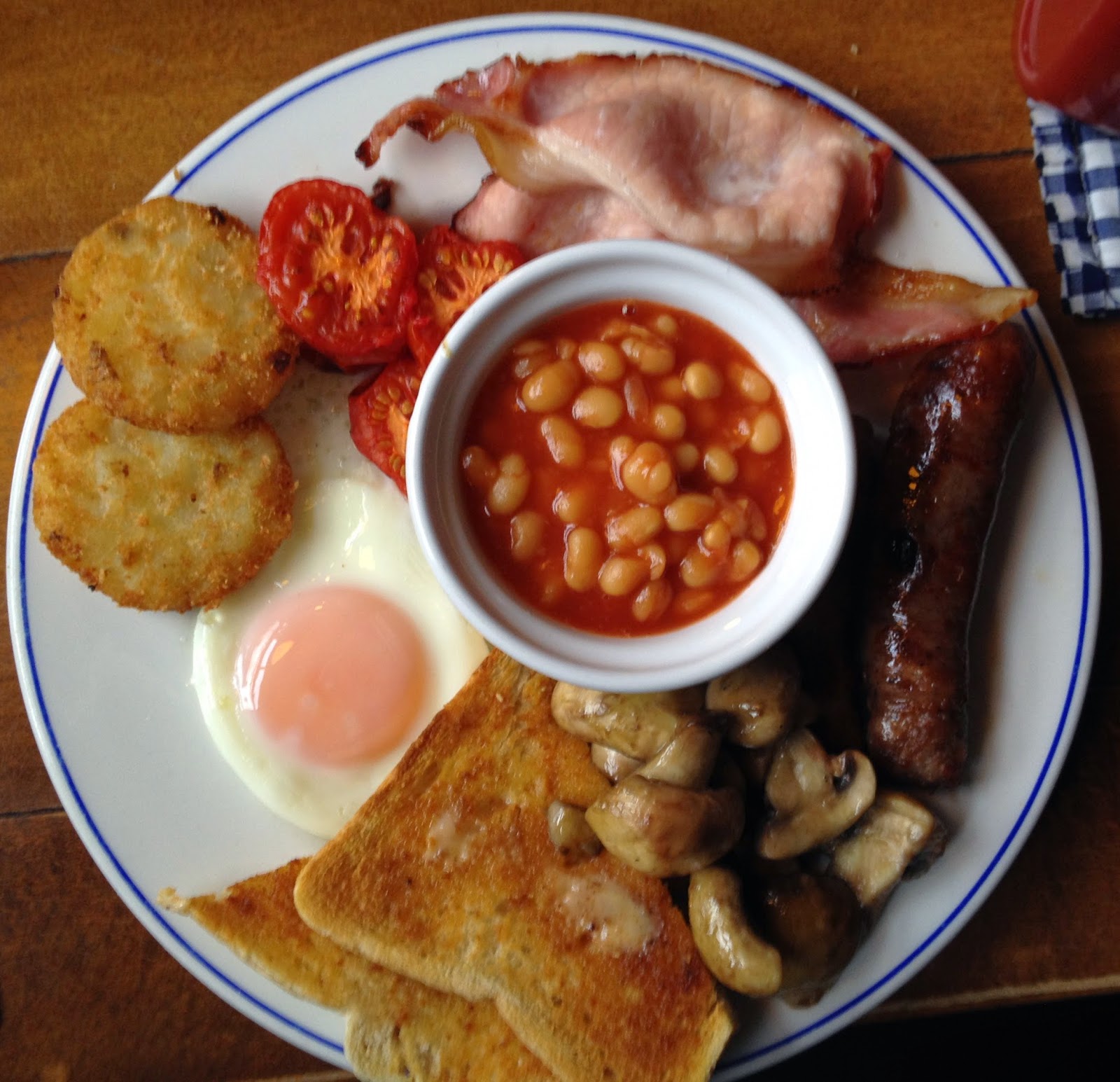 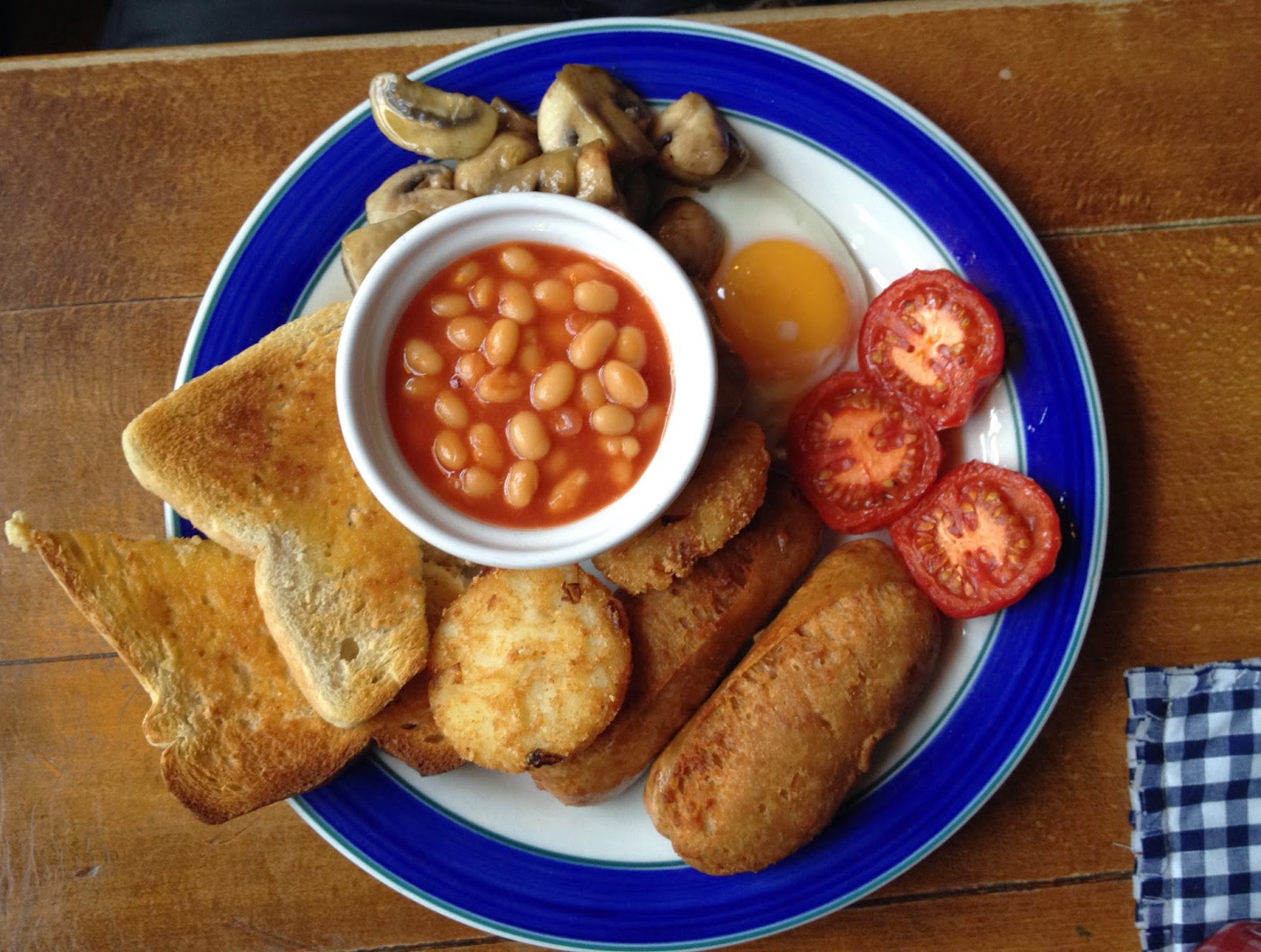