Cafe on the corner - Norwich 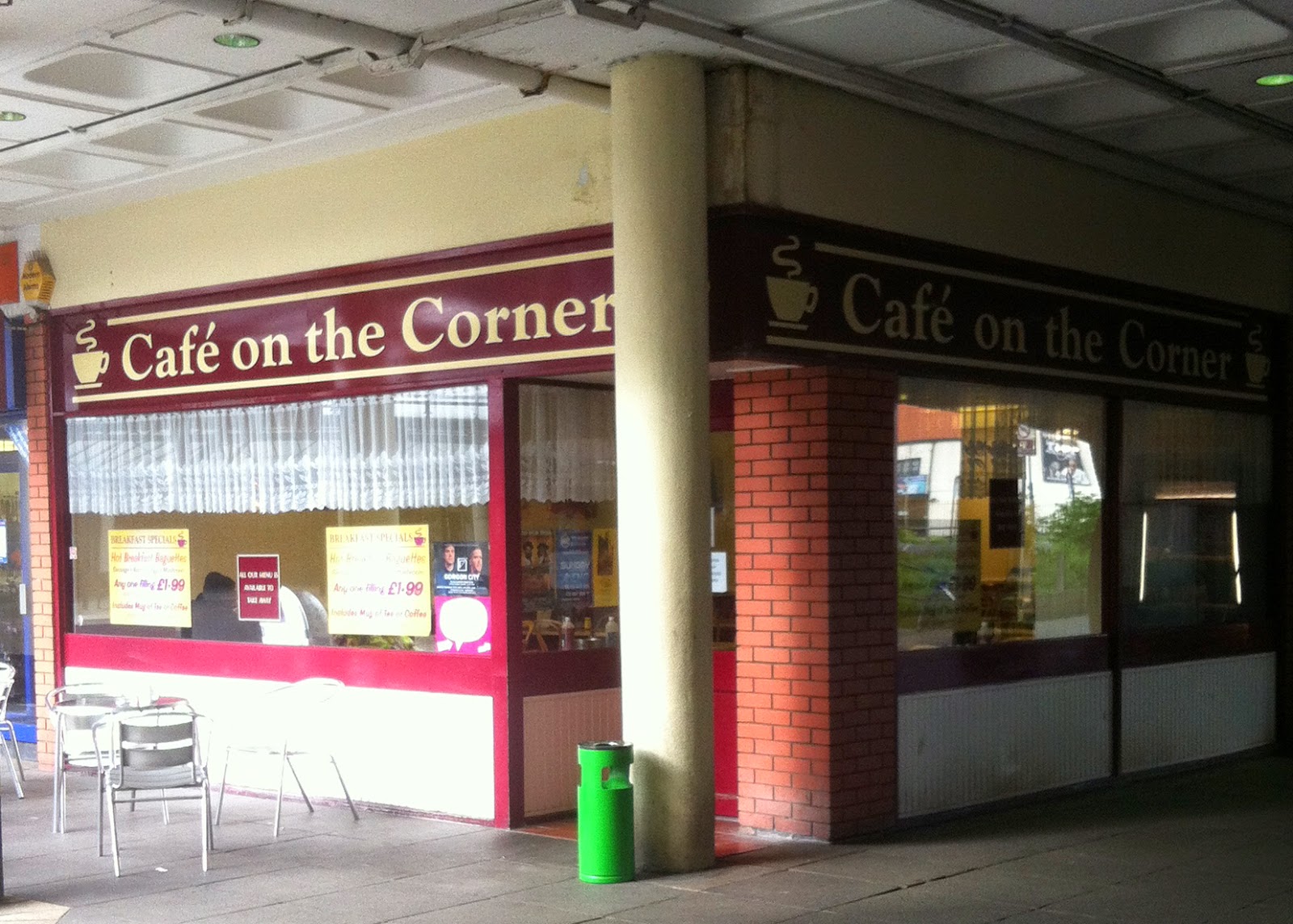 The quite appropriately named Cafe on the corner in Anglia Square. 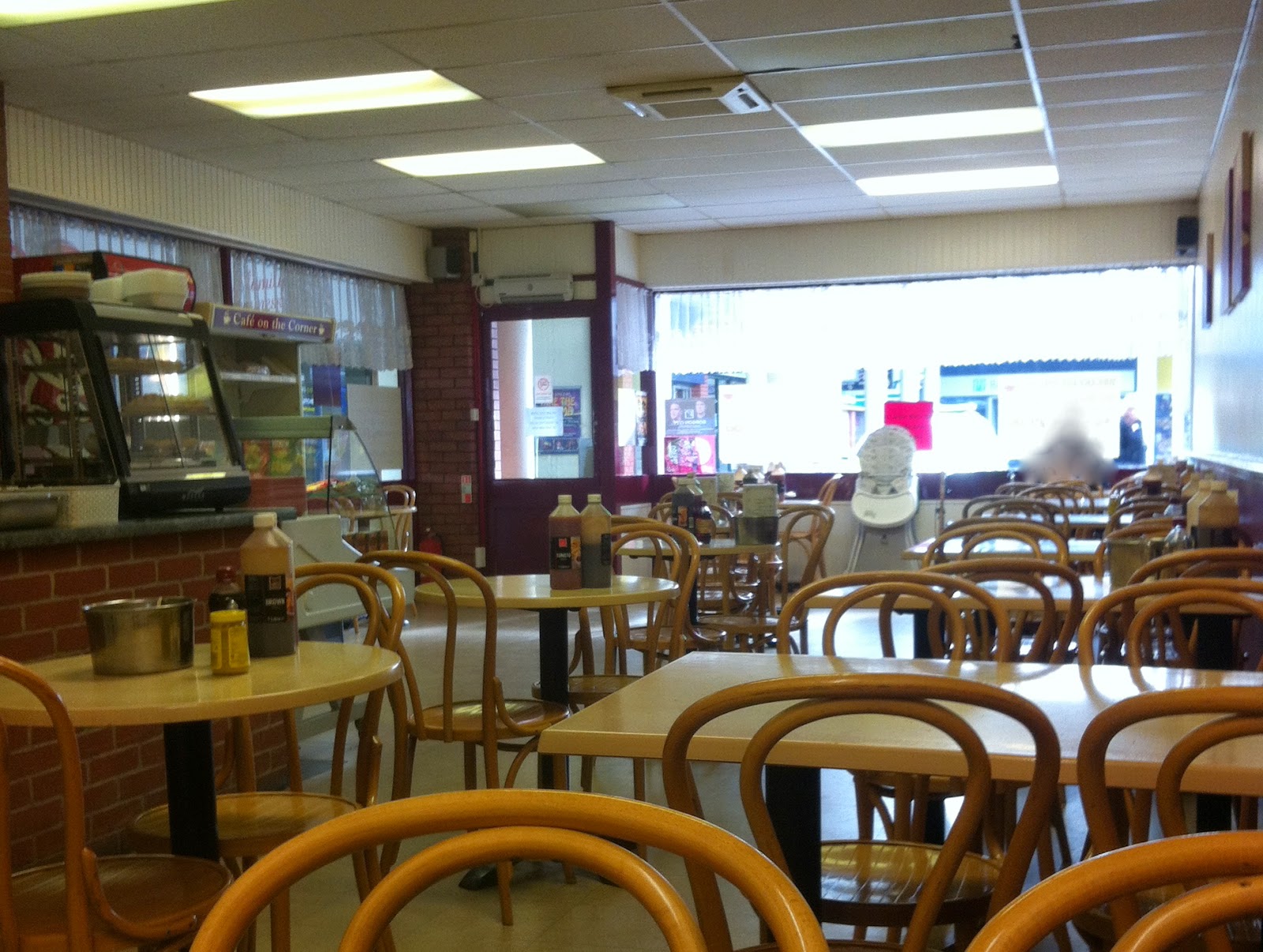 Inside is fairly big with further seating outside. 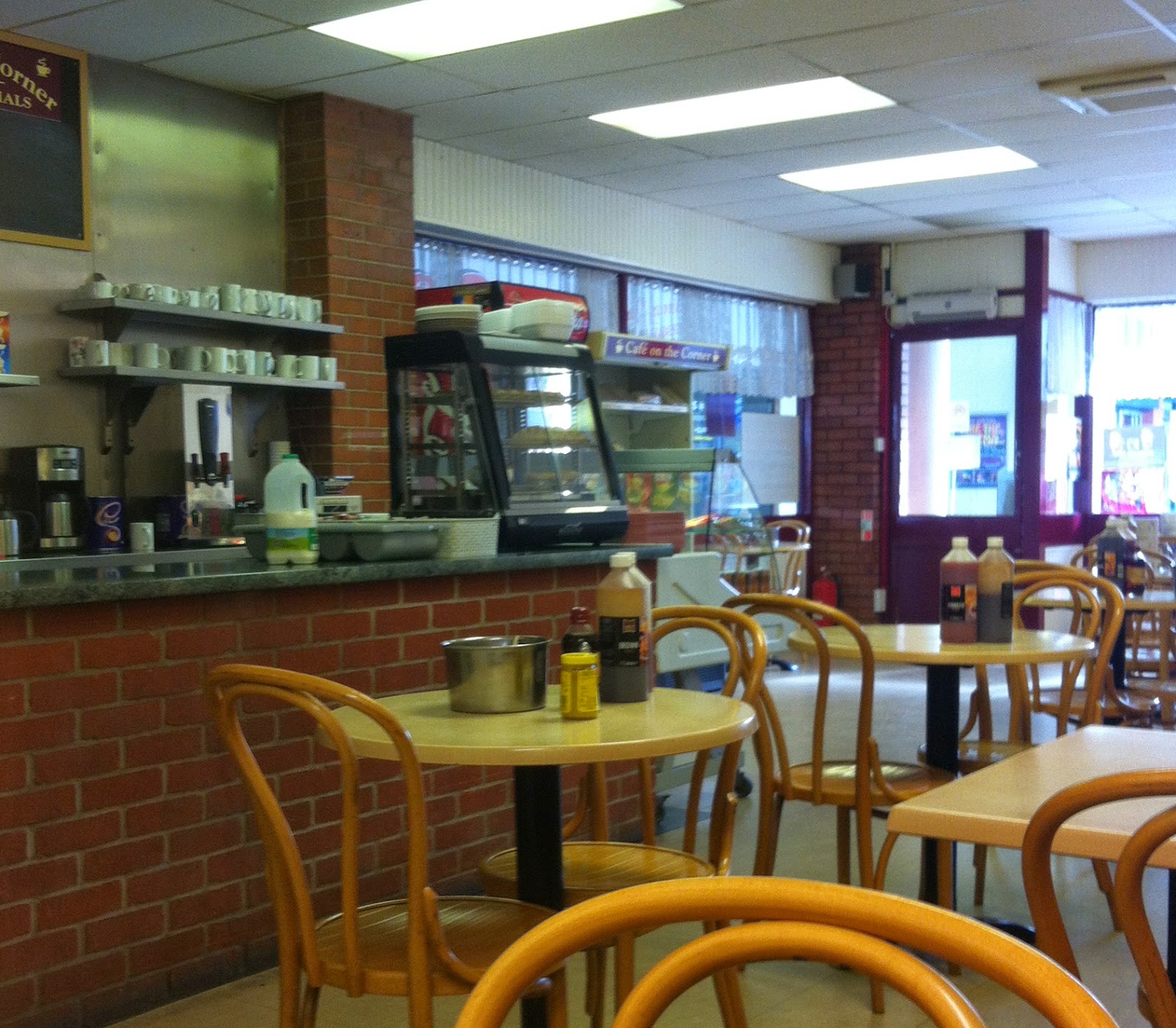 The counter can be found towards the rear, place your order here. 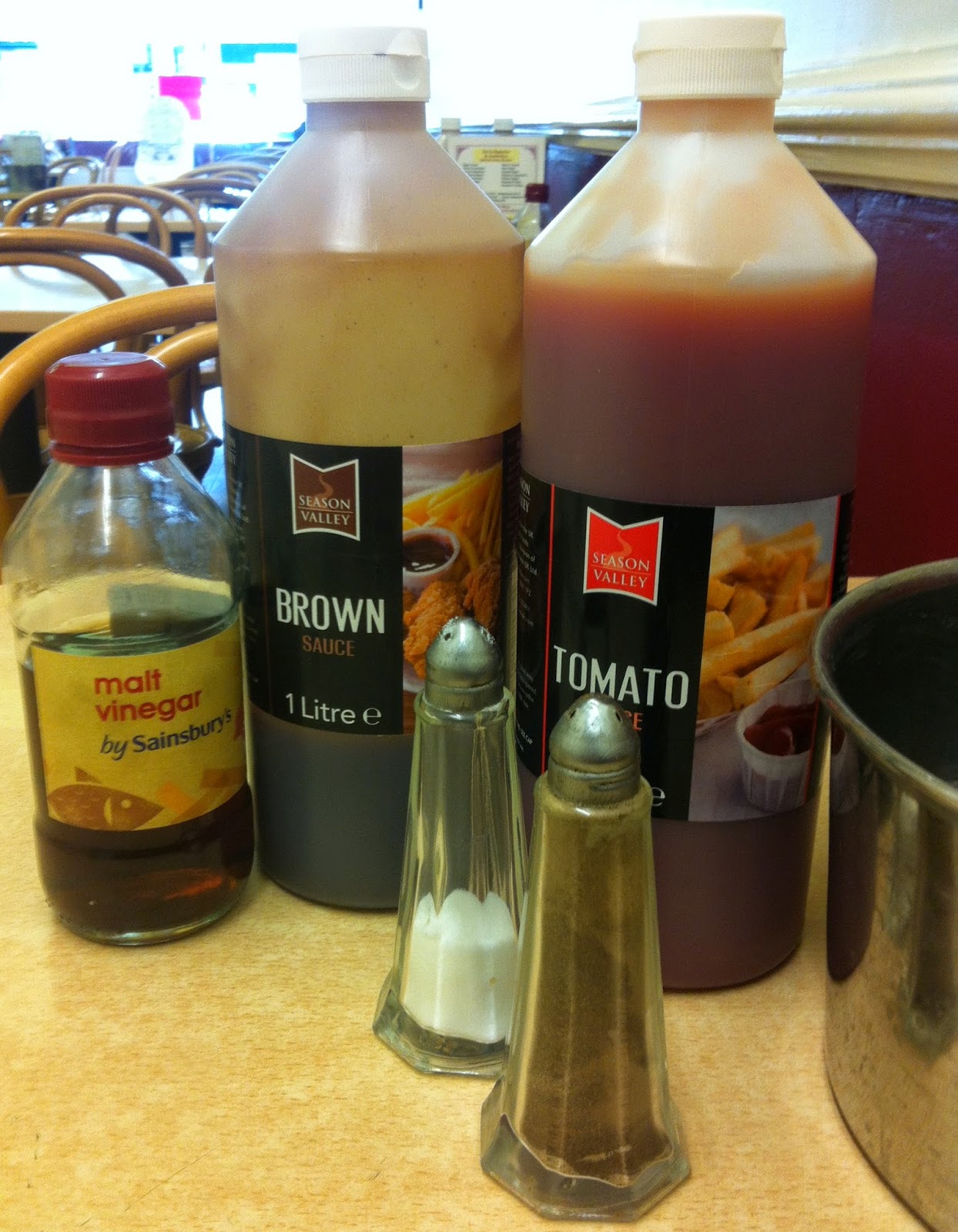 Cheap burger van sauces but plenty of it. 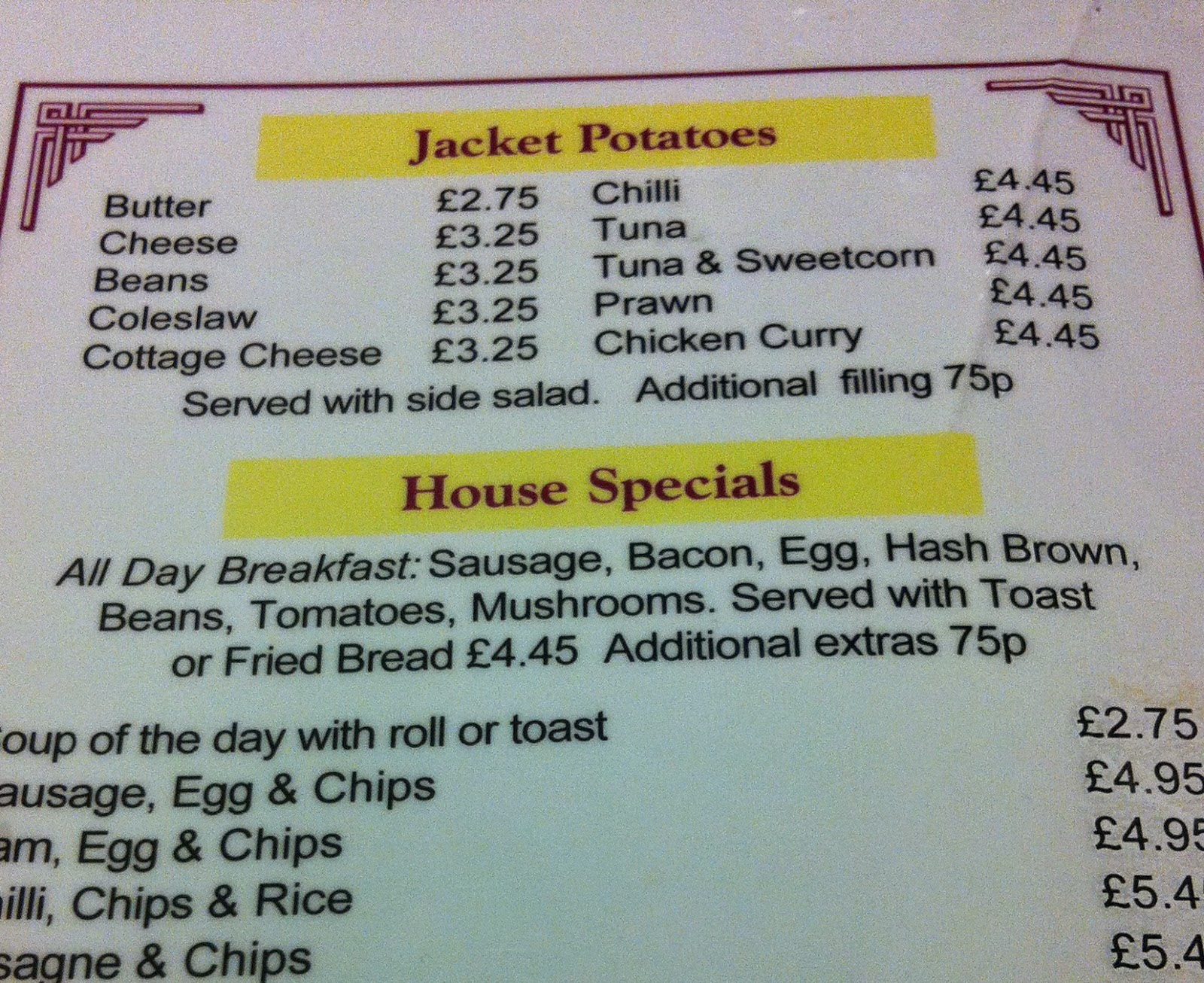 Just one breakfast option, this is available all day. 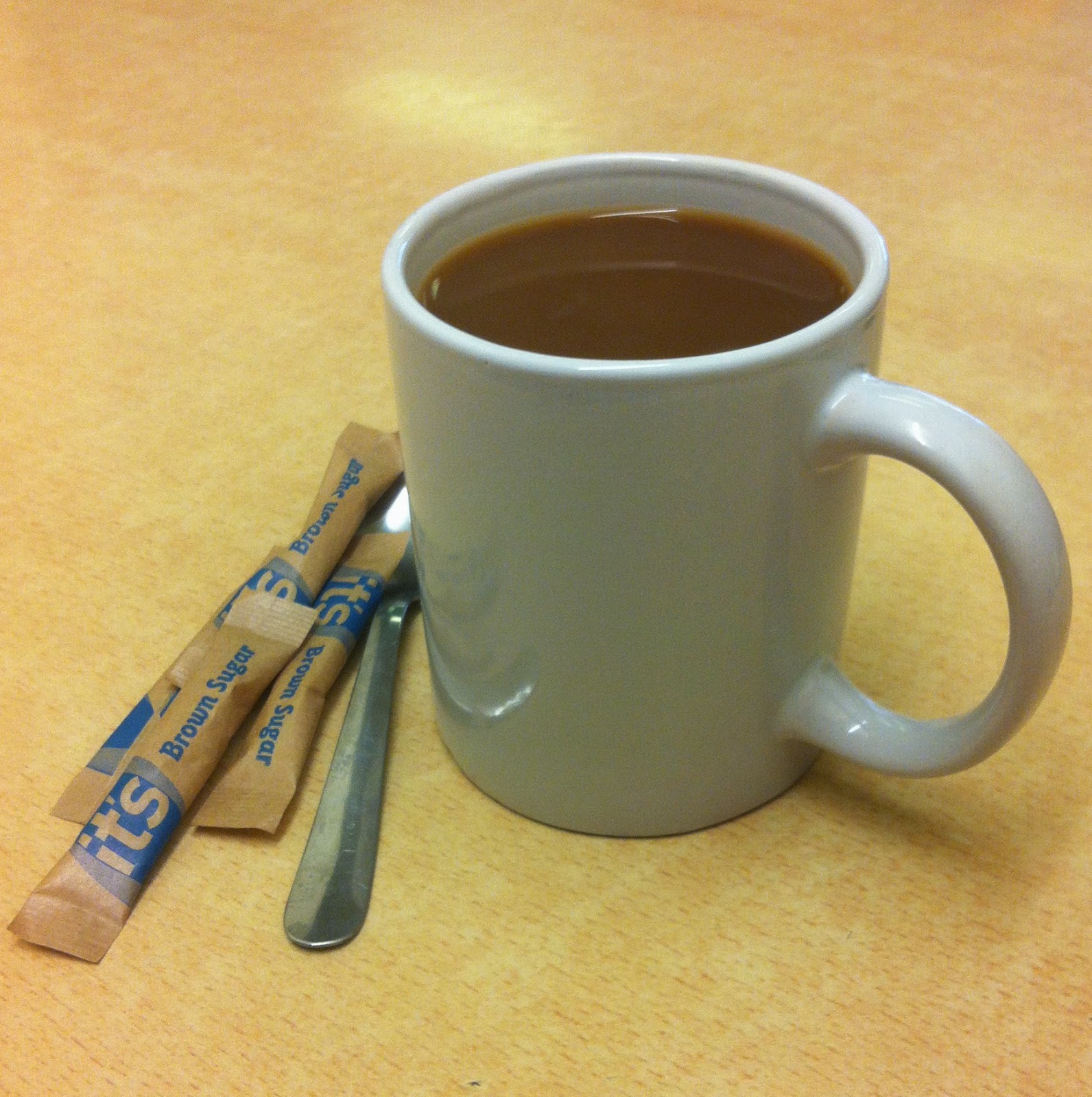 £1.40 for a filter coffee that has very little flavour. 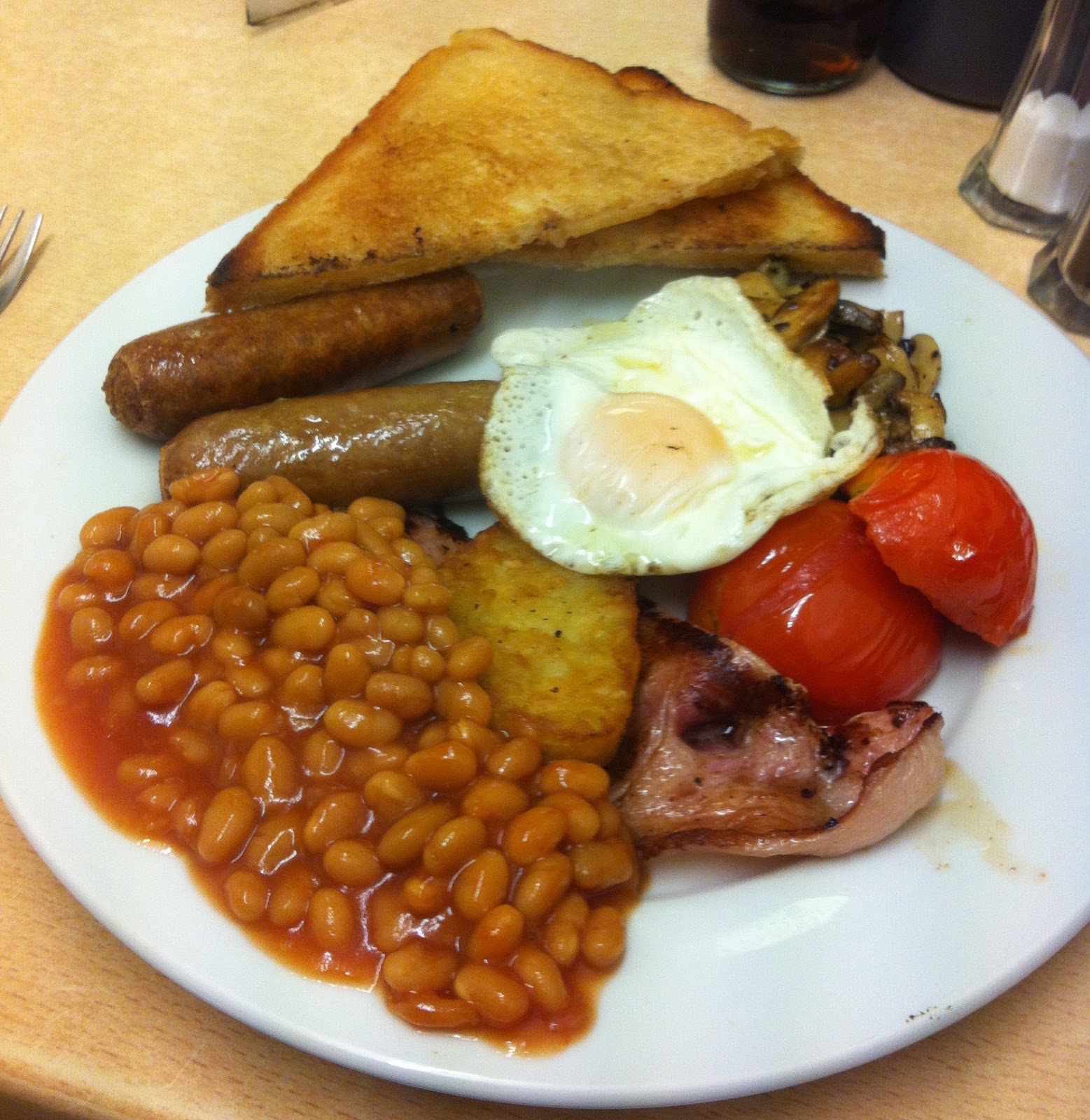 For a budget breakfast not too bad at all really. 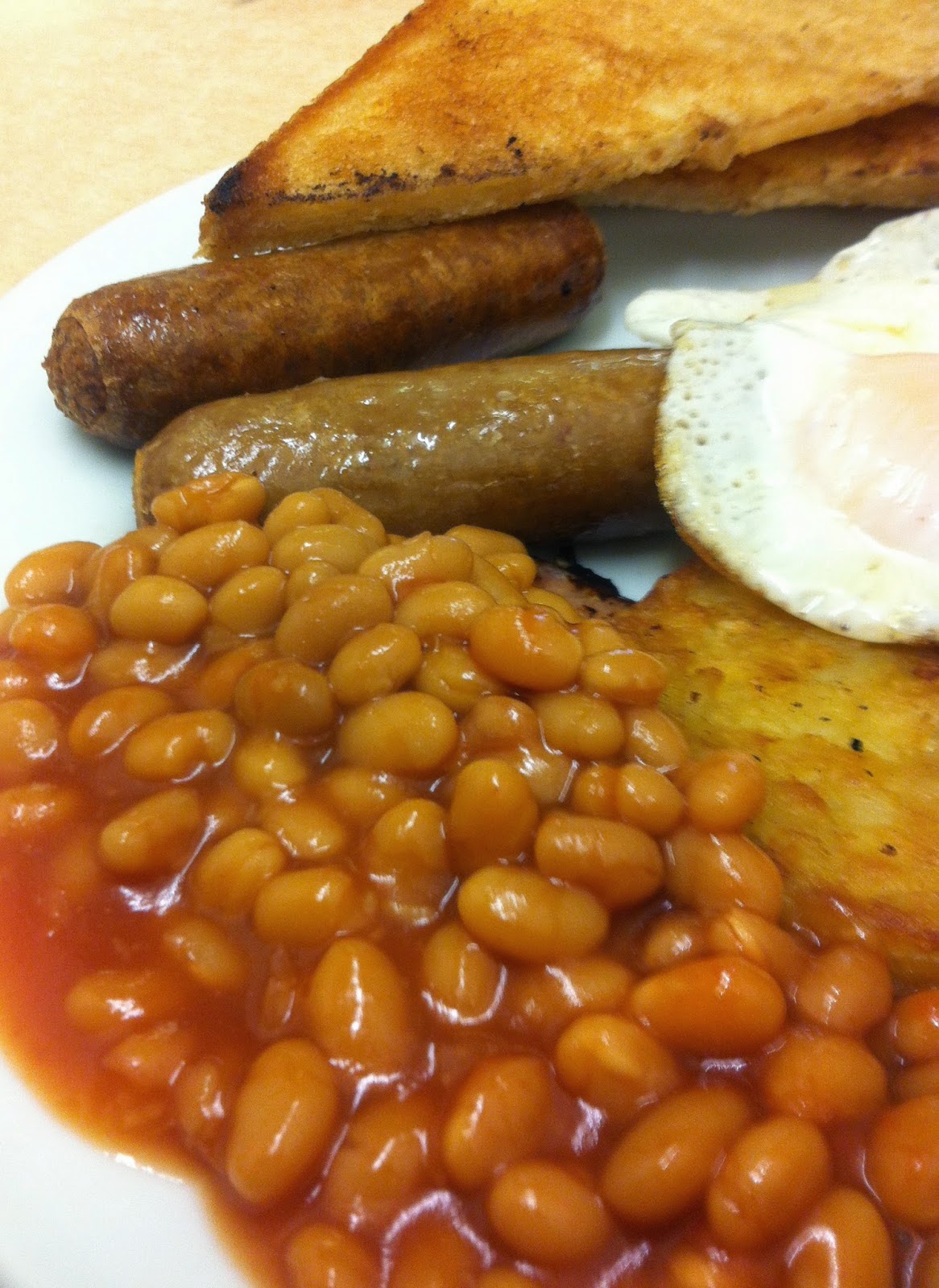 I guess economy sausages are bound to make an appearance when you are paying just £4.45 for a breakfast. 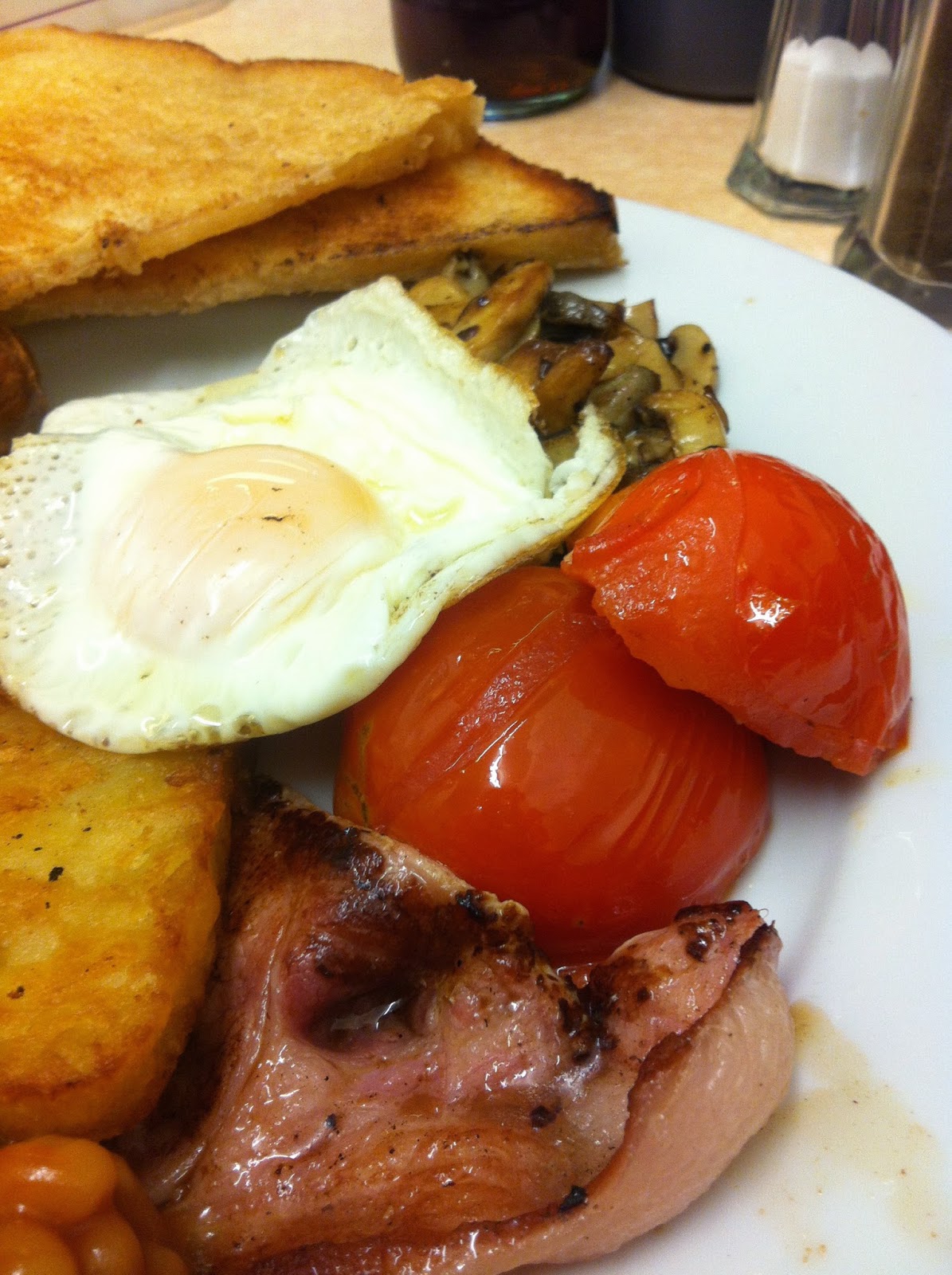 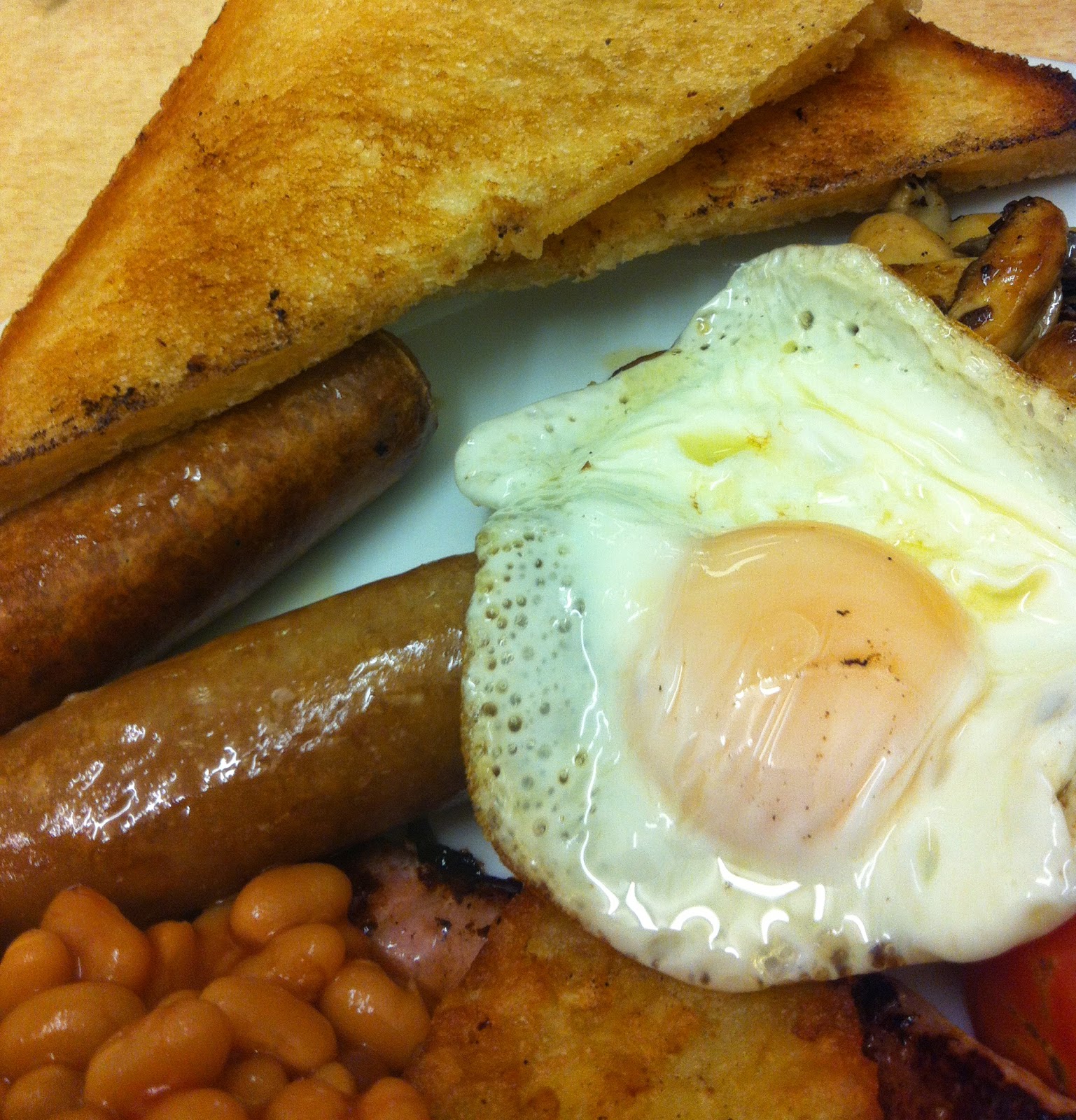 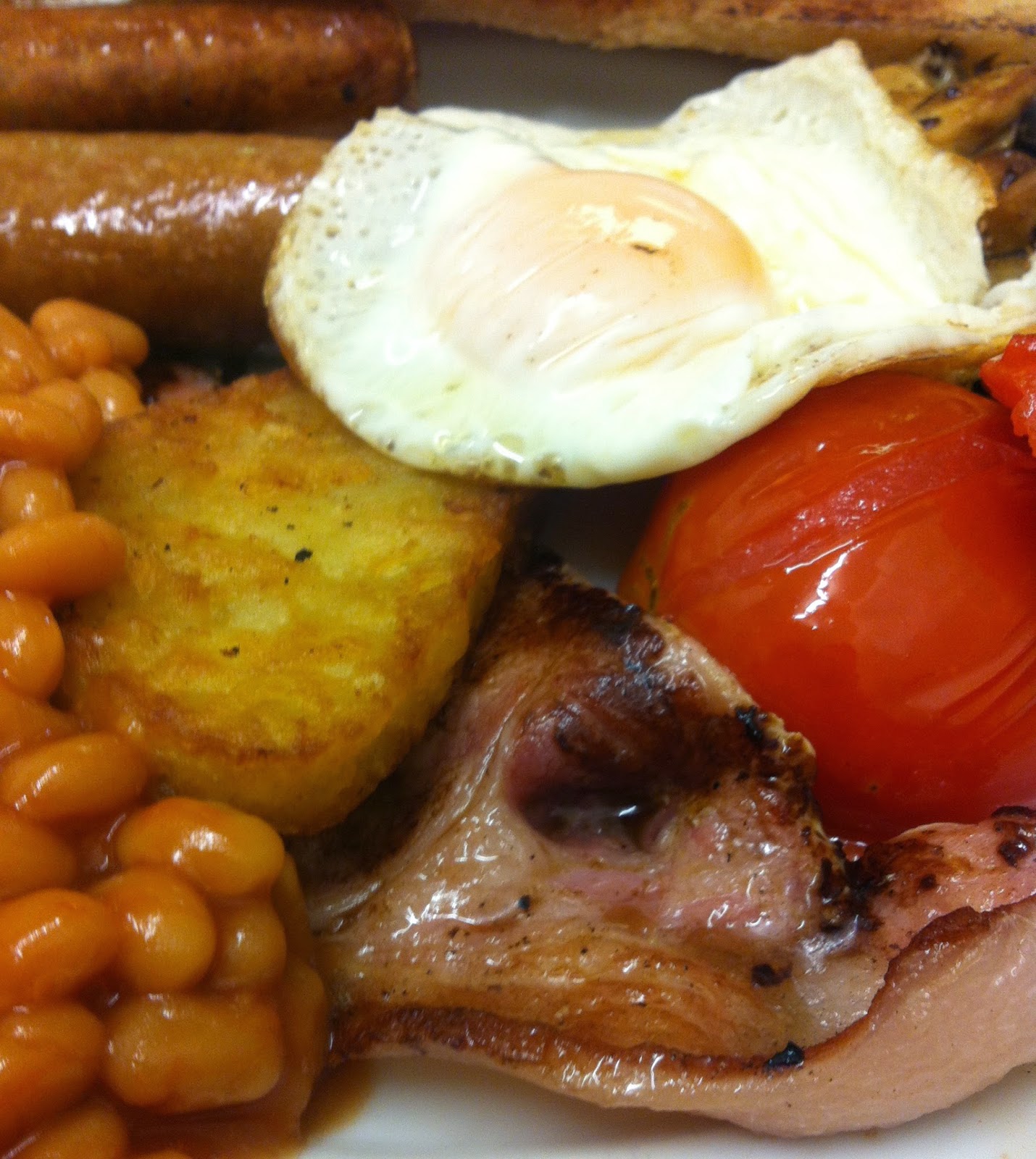 Although many people complain about the look of Anglia Square I personally am a big fan of brutalist architecture. When you stand in the centre you are surrounded by fine examples of it with the cinema one side and the derelict HMSO building (Sovereign House) towering above you on the opposite side with its tube like stairwell clinging to the side. My favourite example of this era is most definitely Erno Goldfinger's iconic masterpiece Trellick Tower in London which I have visited on a number of occasions. This mornings visit to Anglia Square though was not just to admire the architecture but to visit Cafe on the corner for breakfast. Back in February 2011 it was Rendezvous cafe (read that review here) and became the lowest scoring place on my blog. Not long after that it closed down and reopened as Cafe on the corner, it was time to find out if things had improved..


Upon entering - Not much visually had changed since Rendezvous was here except there were some menus to look at now, not on every table though. The layout remained the same with a good number of places to sit inside and some more tables outside. The counter towards the rear is where you place your order, collect your drink, sugar and cutlery. Once you have paid at the counter find a table and the food is brought over when it is ready. Each table has a large metal container for wrappers and disguarded tea bags as well as some  vinegar, salt, pepper and giant bottles of sauce. It was clean and well lit with decent views out onto Anglia Square. With only one other customer there when I was it was difficult to gauge the atmosphere but it seemed reasonable, this was helped by the radio in the background ensuring I wasn't sat in silence. 6/10

Service - There were two members of staff working when I was there, one took my order and the other brought the food over when it was ready, both seemed fairly friendly and I was offered an option of fried bread or toast. 5/10

Presentation - Everything was placed on the plate with some degree of care but quite a bit of excess oil could be seen on and around the bacon, mushrooms and egg. 6/10

The food - The economy sausages were mildly enjoyable but with that classic economy spongy texture, the bacon tasted ok but was very oily. The egg had a nice runny yolk but was a bit overdone around the edges. The fried bread was holding a tad too much oil but did have a decent crunch to it. The tomatoes tasted nice, the hash brown and beans were as you would expect and the mushrooms nice but also very oily. As far as economy breakfasts go though this one was fairly ok and served nice and hot. 5/10

Value for money - The all day breakfast cost £4.45, standard economy items are what you get but at this price it is pretty much what you would expect. A mug of coffee which I found fairly flavourless cost £1.40 bringing the total to £5.85. Certainly not overpriced but also not hugely enjoyable. 5/10

Overall - Certainly an improvement over my previous visit to Rendezvous Cafe with a much better cooked breakfast now being offered here. Possibly worth a look if you are happy with standard economy ingredients but if you like a decent coffee and a good quality sausage then spend the extra ££ and take yourself off to The Street Cafe only 5 minutes away on Magdalen Street. 5.5/10