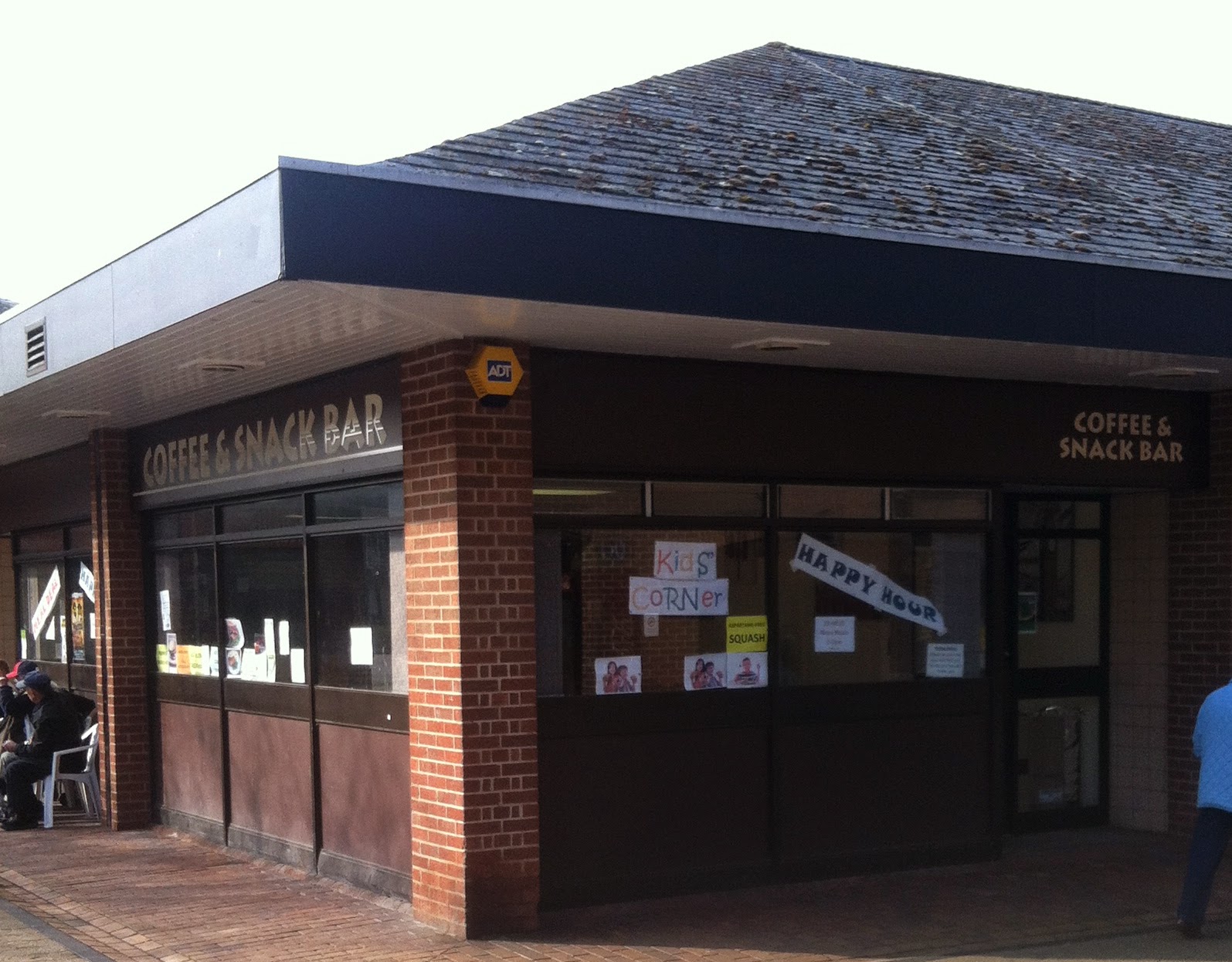 The cafe is opposite Roys in Bowthorpe shopping centre. 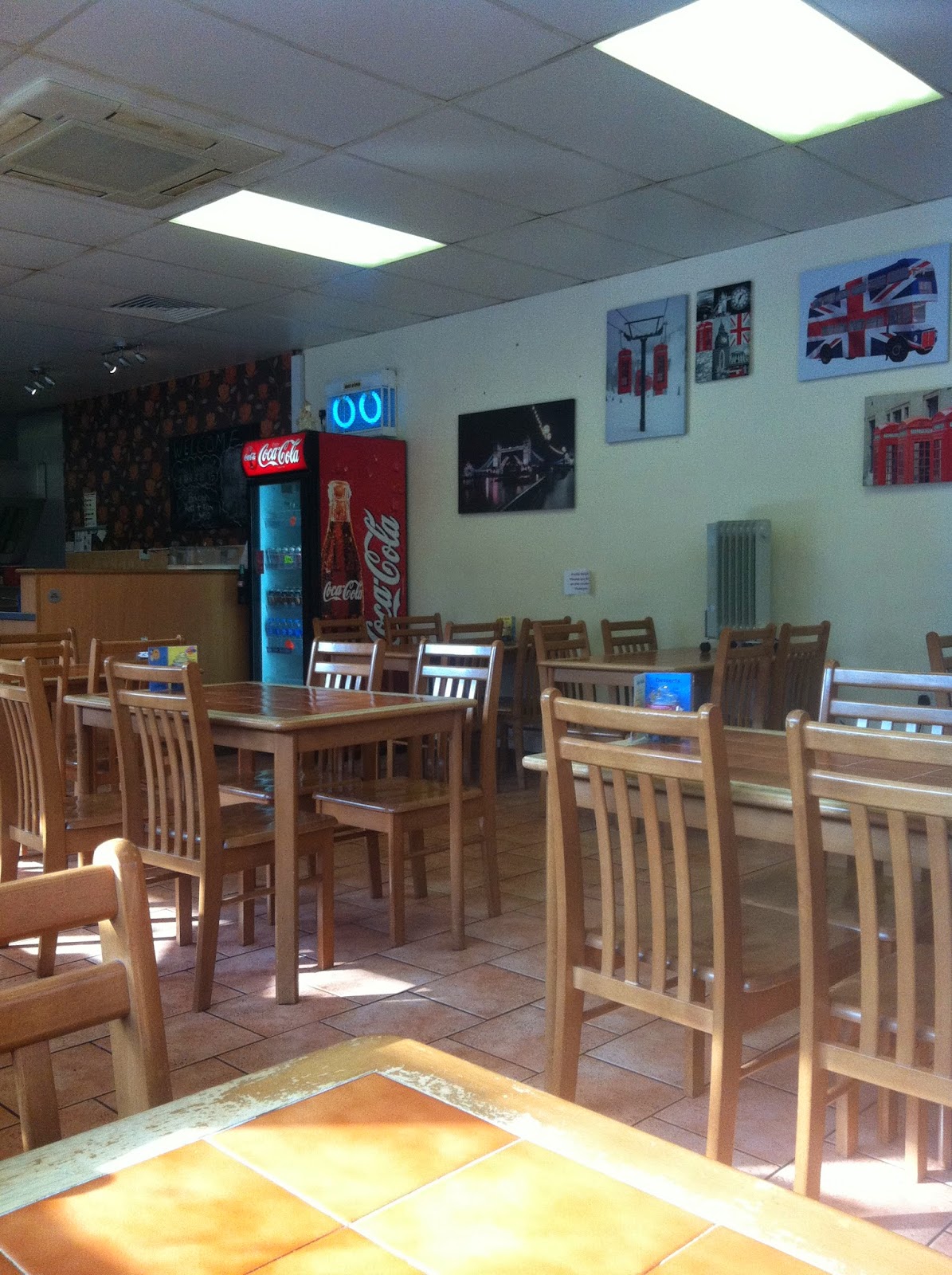 Inside it felt quite depressing and lacked any atmosphere. 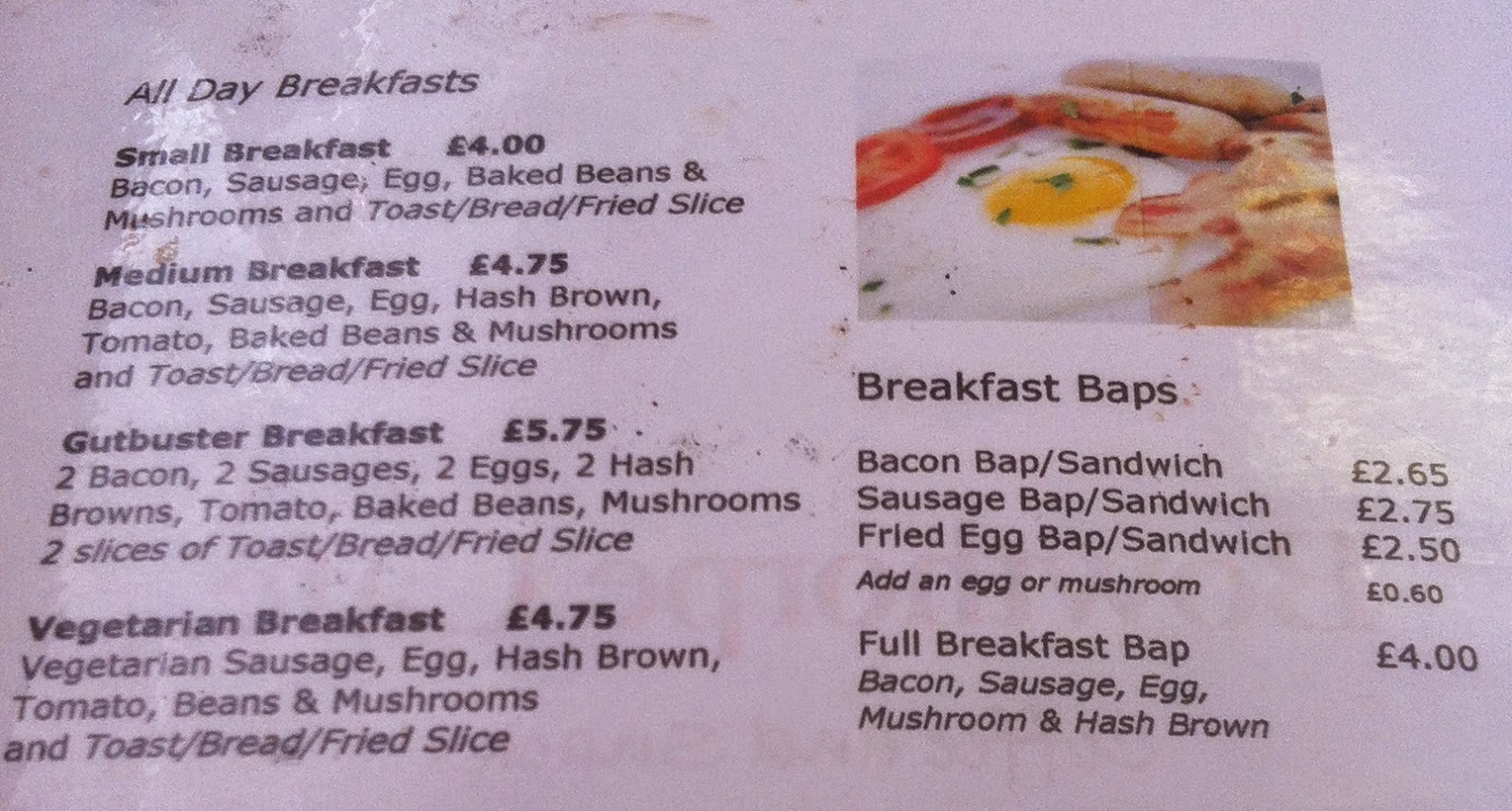 The one menu I eventually found contained a selection of breakfasts served all day. 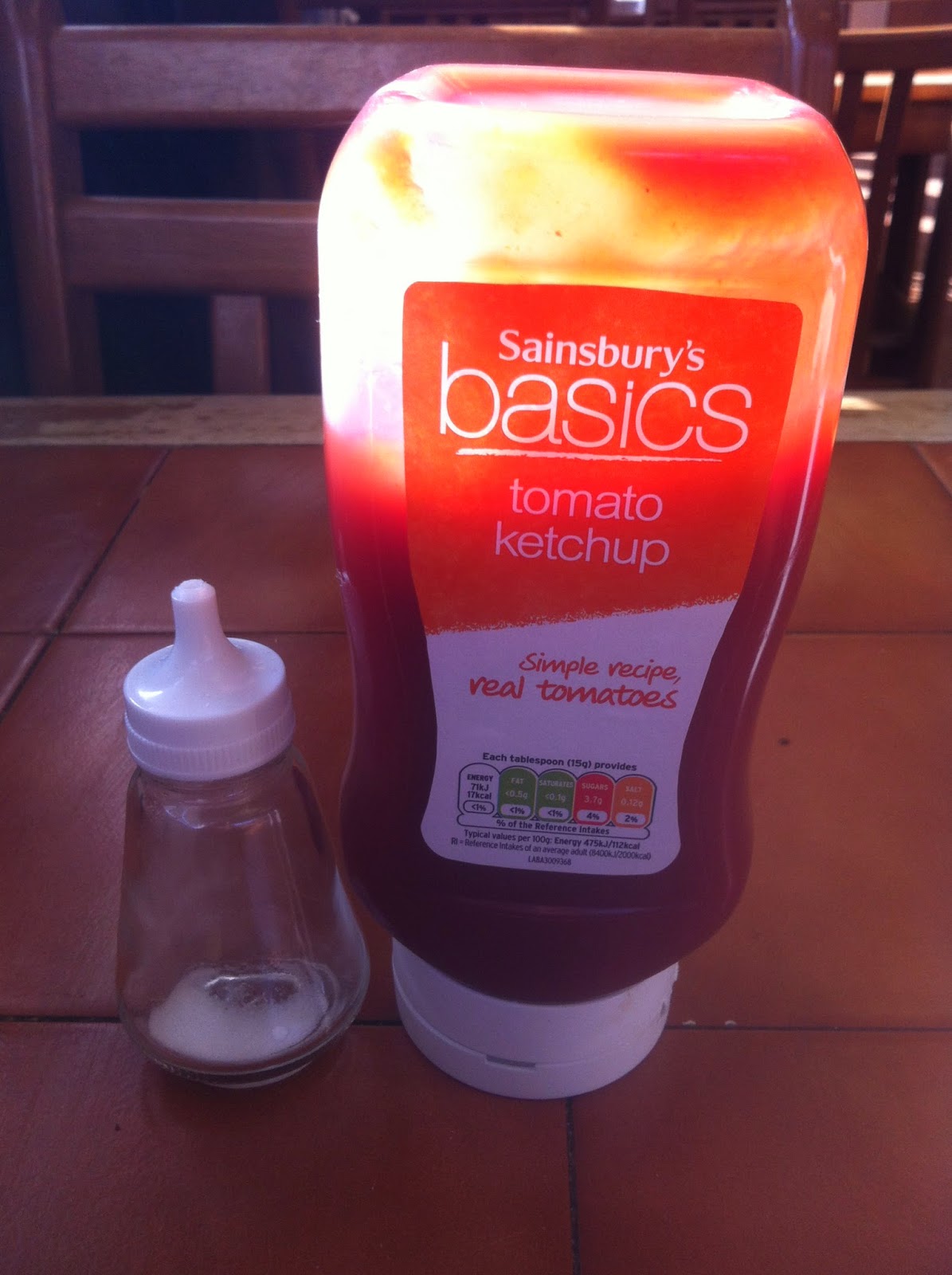 Economy ketchup and an almost empty salt pot didn't exactly fill me with much hope! 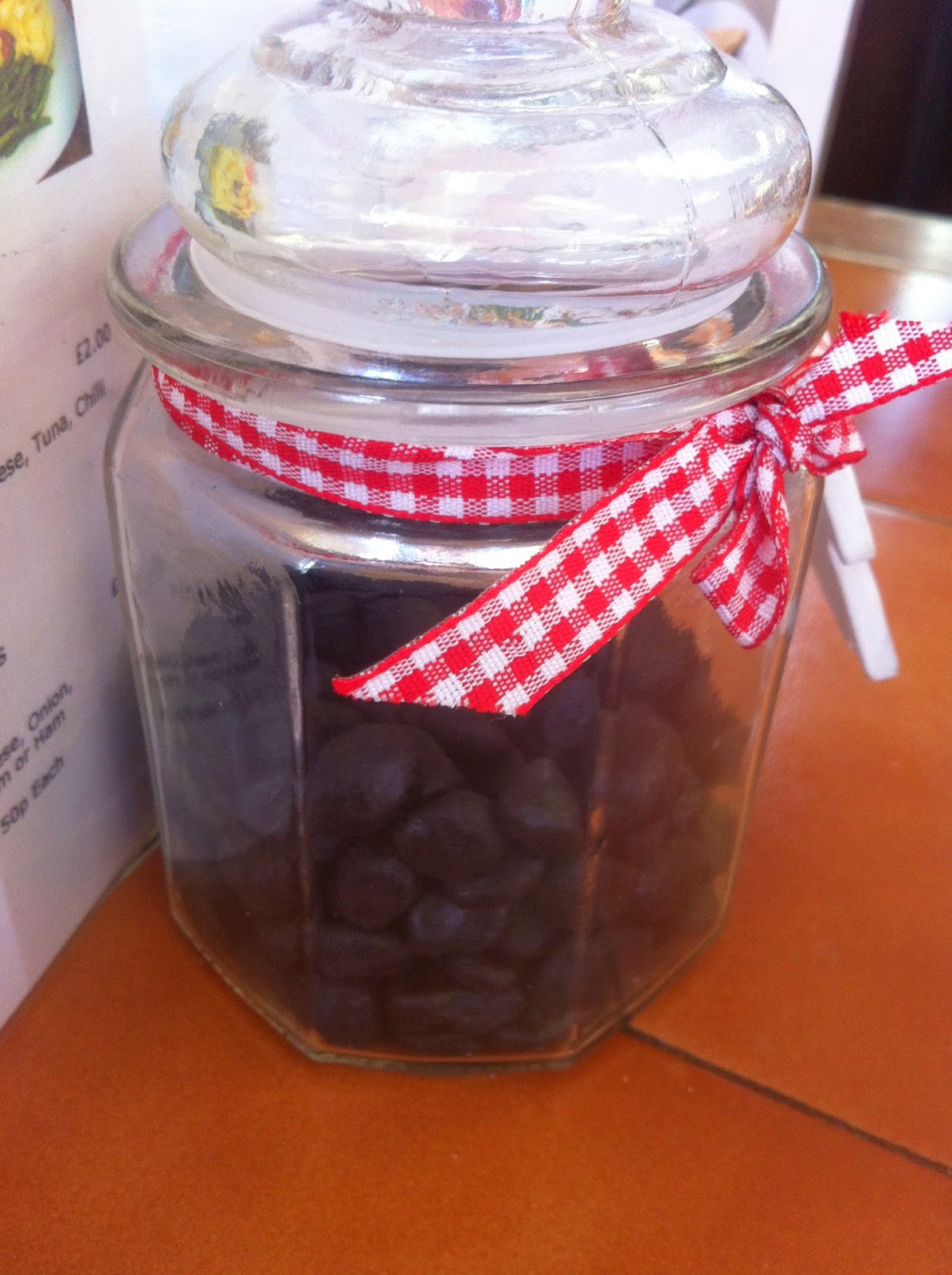 A little jar on the table containing what looked like coffee beans, perhaps things were looking up and they served a decent coffee here! 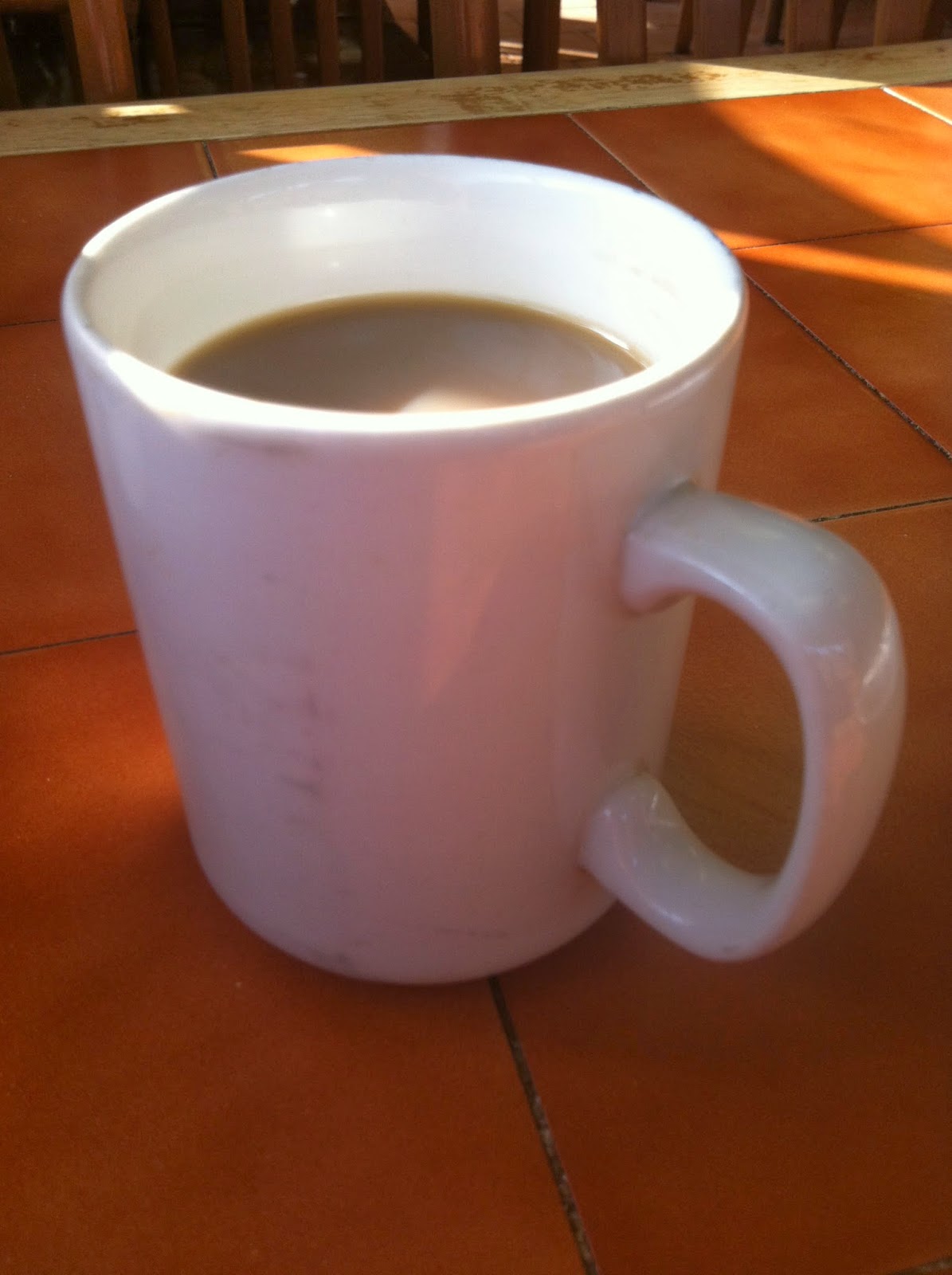 Sadly not though, a really cheap instant coffee cost £1.20 and didn't taste of much at all. 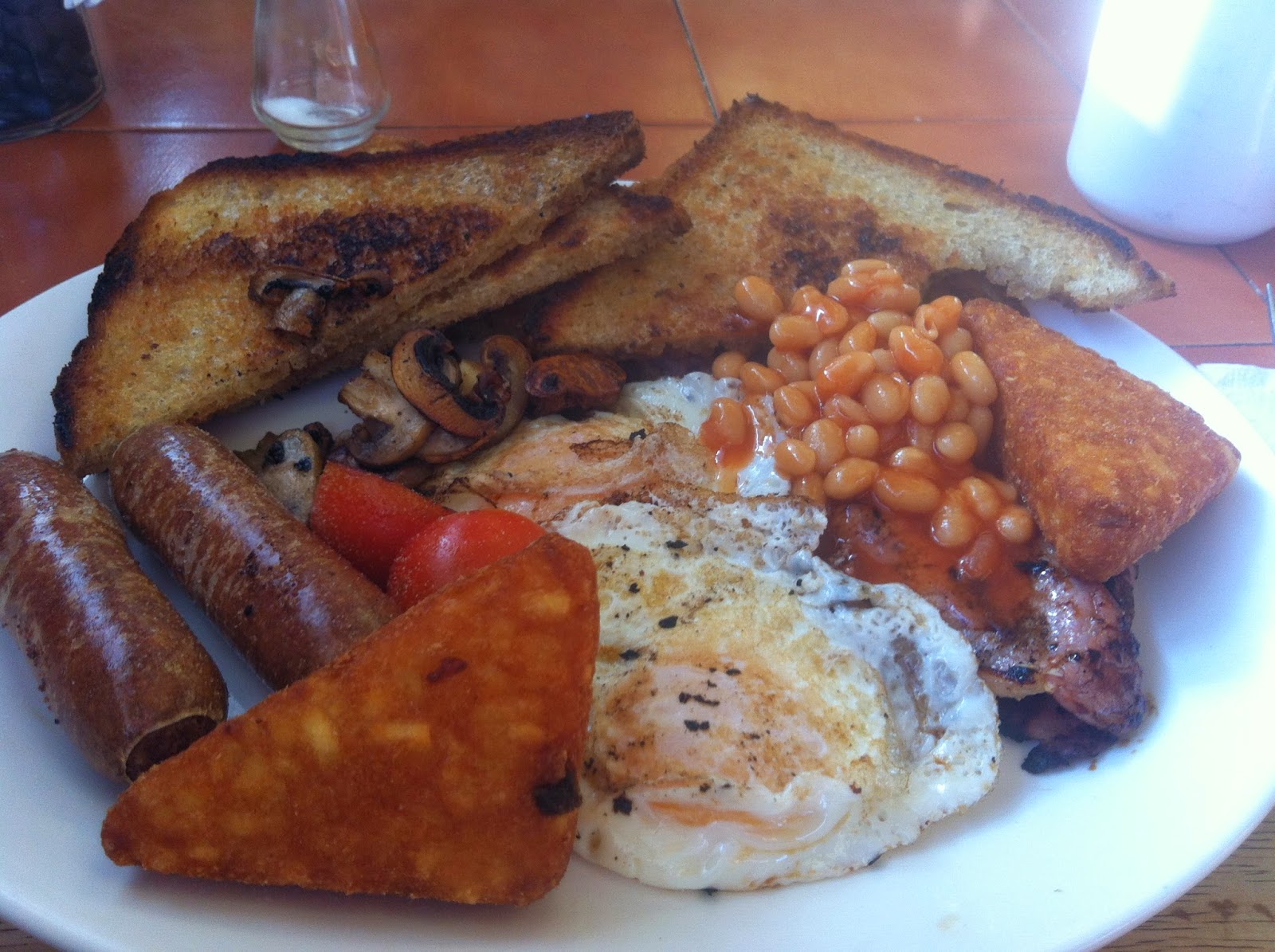 Oh dear.. Not a pretty sight. 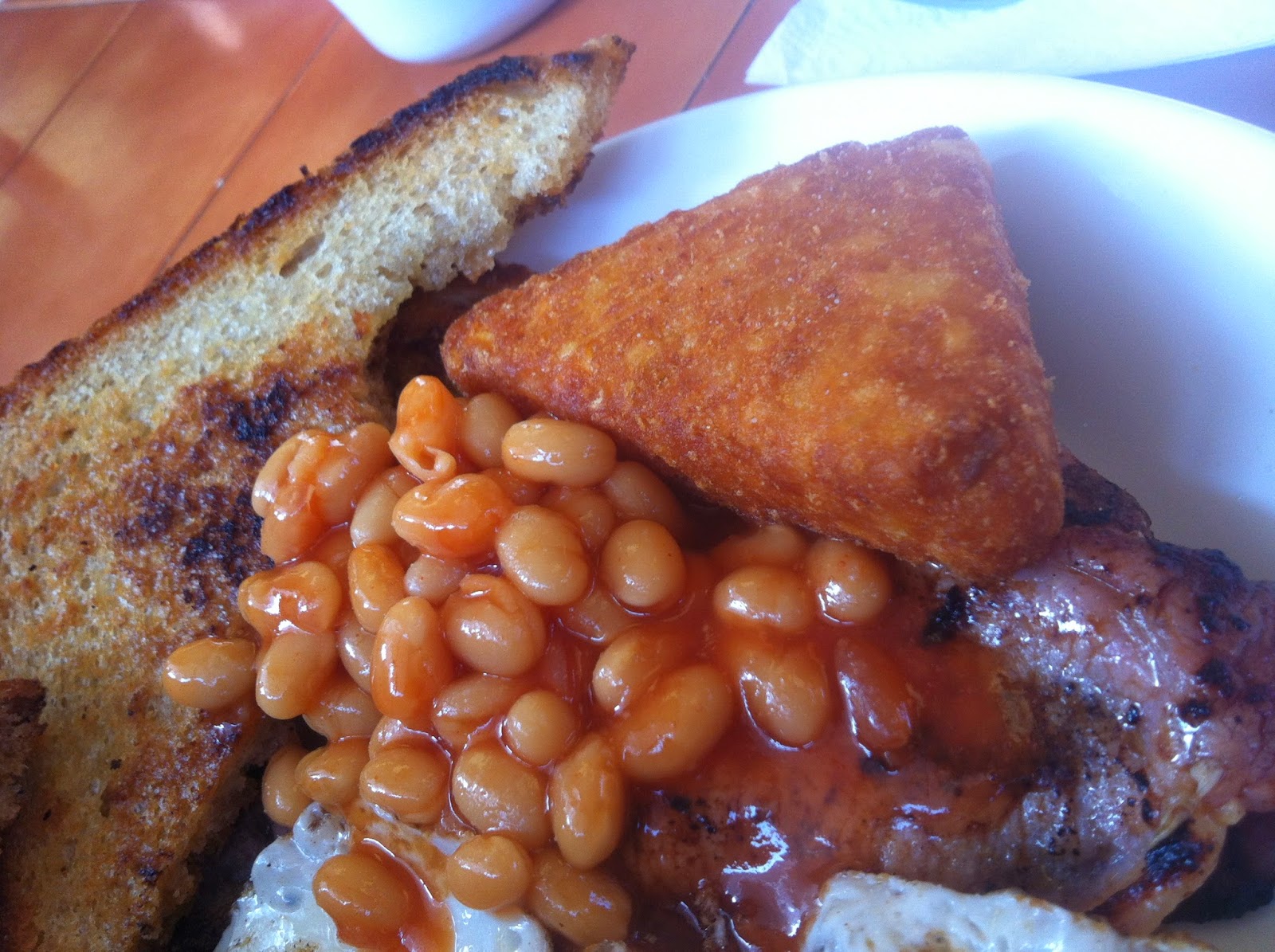 The crunchy hash brown was probably the highlight of this breakfast, the portion of beans on this gutbuster breakfast was tiny. 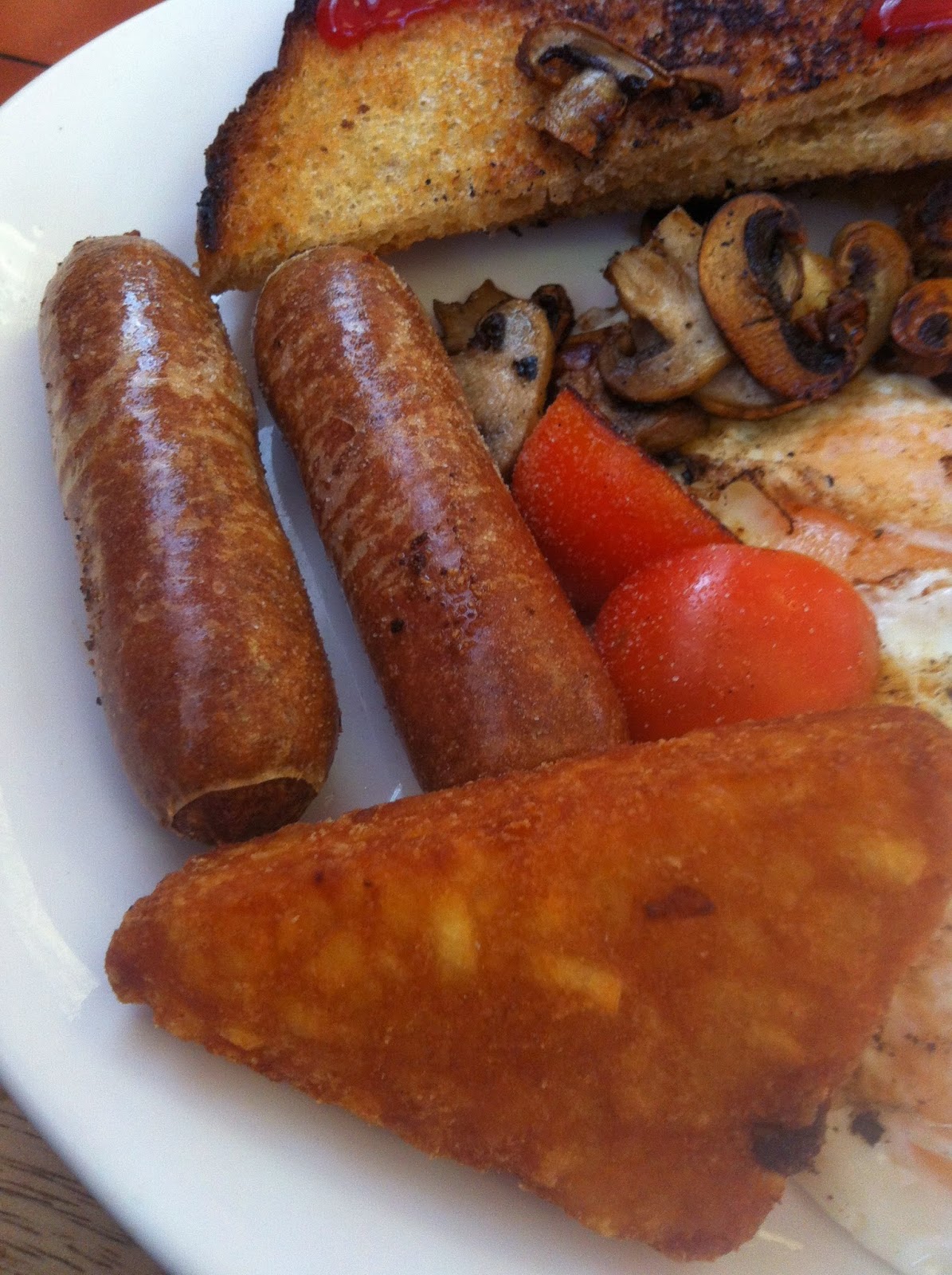 A gutbusting one cherry tomato cut in half and around two mushrooms sliced. 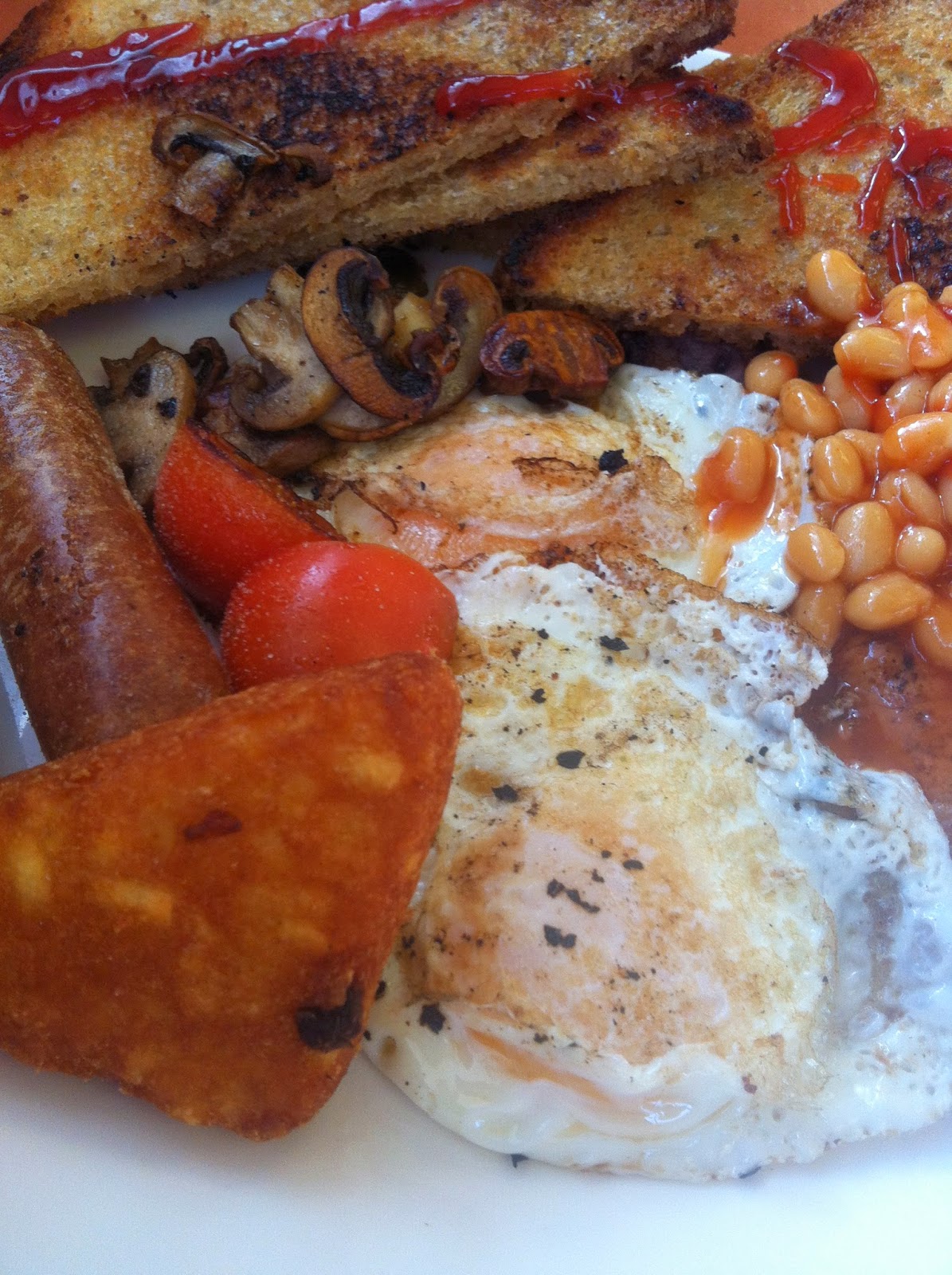 Burnt fried bread and eggs covered in black stuff from the griddle.

The cheap economy sausage sunk in despair as I cut through it..

Bowthorpe shopping centre cafe had been on my "places to visit soon" list for a long time, with a morning to spare I headed out to Bowthorpe to finally see what the breakfast being served there was like..

Upon entering - There were lots of people sitting outside by the door when I arrived, inside was empty though. It is a fairly large cafe with an open plan kitchen in the corner by the door and a good number of tables to choose from. I thought it felt quite a depressing place to sit and dine laking any real character, everything was looking a bit tired and worn. There didn't seem to be any menus anywhere but I did eventually spot one on a table by the window. The menu itself felt quite sticky to touch and was in need of a clean. There was a small pot containing what looked like coffee beans on each table but don't be under any illusion that the coffee served here is going to be special, £1.20 buys you a mug of cheap instant with very little taste. The condiments and sauces were on a table by the door along with cutlery and serviettes, almost empty salt pots and value ketchup will further depress you. Place your order at the counter and pay, drinks and food are brought over when they are ready. 3/10

Service - I couldn't see a menu anywhere at first so asked the lady behind the counter about breakfasts, she told me what was available and I chose the gutbuster. The group of people sitting outside where occasionally ordering drinks which were served between making my breakfast. My drink arrived first and a bit later the breakfast was being plated up in the kitchen, at this point a customer from outside popped his head in the door asking where his coffee was. As my breakfast was being brought over to me the lady said to me "who does he think he is? F***ing royalty" (referring to the customer requesting his coffee) This was the first time ever a breakfast had been served with an f word, quite shocking! 2/10

Presentation - Any breakfast served with economy sausages is never a pretty sight but combine this with slightly burnt fried bread and black stuff from the griddle coating the bacon and eggs and you find yourself looking at a breakfast that has clearly not been cooked with pride. Visually it reminded me of the kind of breakfast served from a mobile catering van at a music festival. 3/10

The food - The bacon although black in places tasted ok but the overcooked economy sausages were far from special releasing air as I cut into them revealing their cheap spongy insides. The hash browns were crispy and the tiny portions of mushrooms and beans were fairly standard. The tiny cherry tomato seemed out of place on a breakfast named "gutbuster" but did taste ok. The fried bread was burnt in places and was more like dry toast. The eggs did have runny yolks and tasted ok but the black bits covering them didn't make them look too good. 3/10

Overall - I had not discovered breakfast heaven here, with a shabby looking breakfast thrown together using cheap ingredients I had got close to entering breakfast hell. On a positive note everything was served piping hot but when it is presented so badly the enjoyment factor is no longer there anyway. 3.5/10