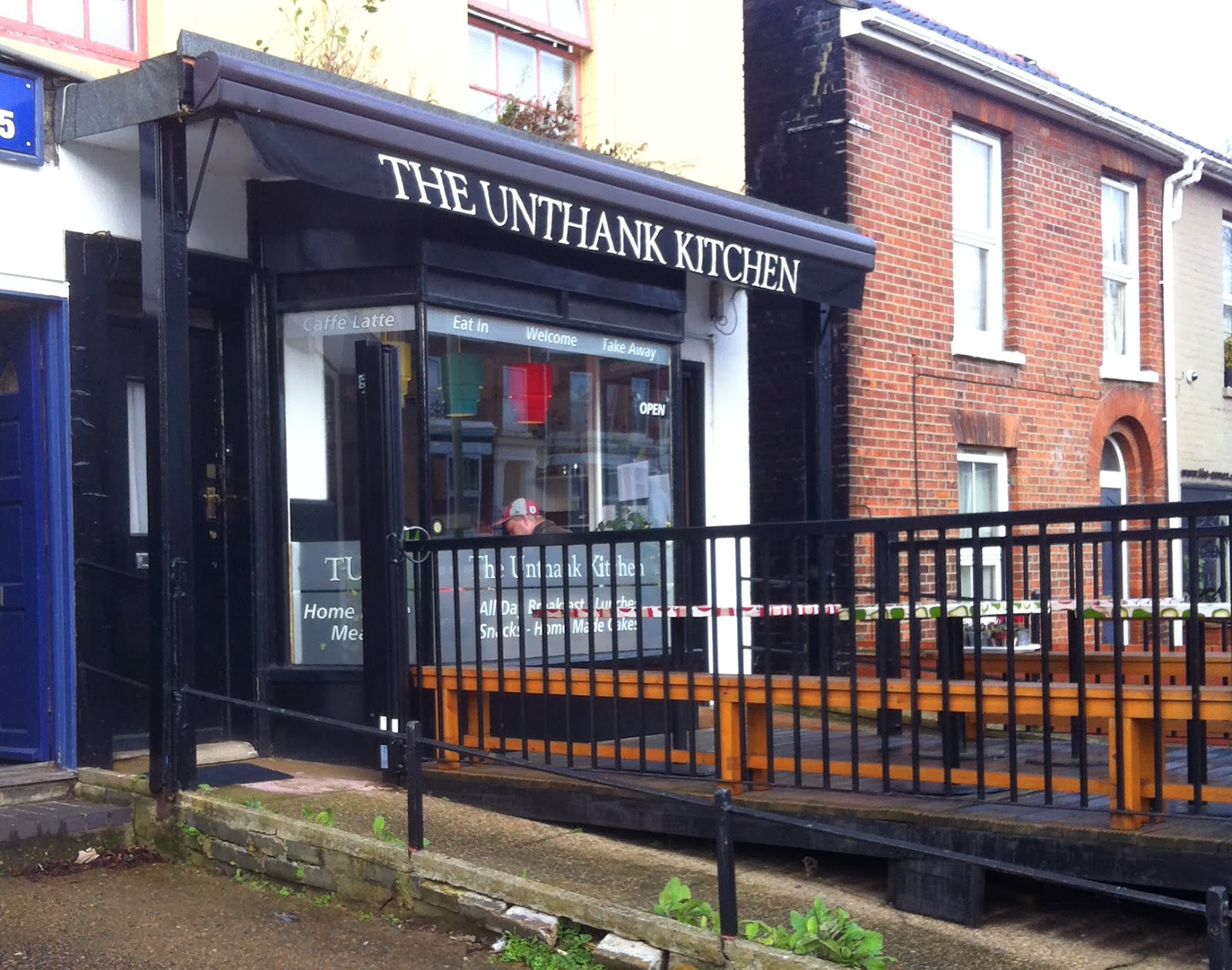 The Unthank Kitchen is a popular cafe in Norwich's golden triangle. 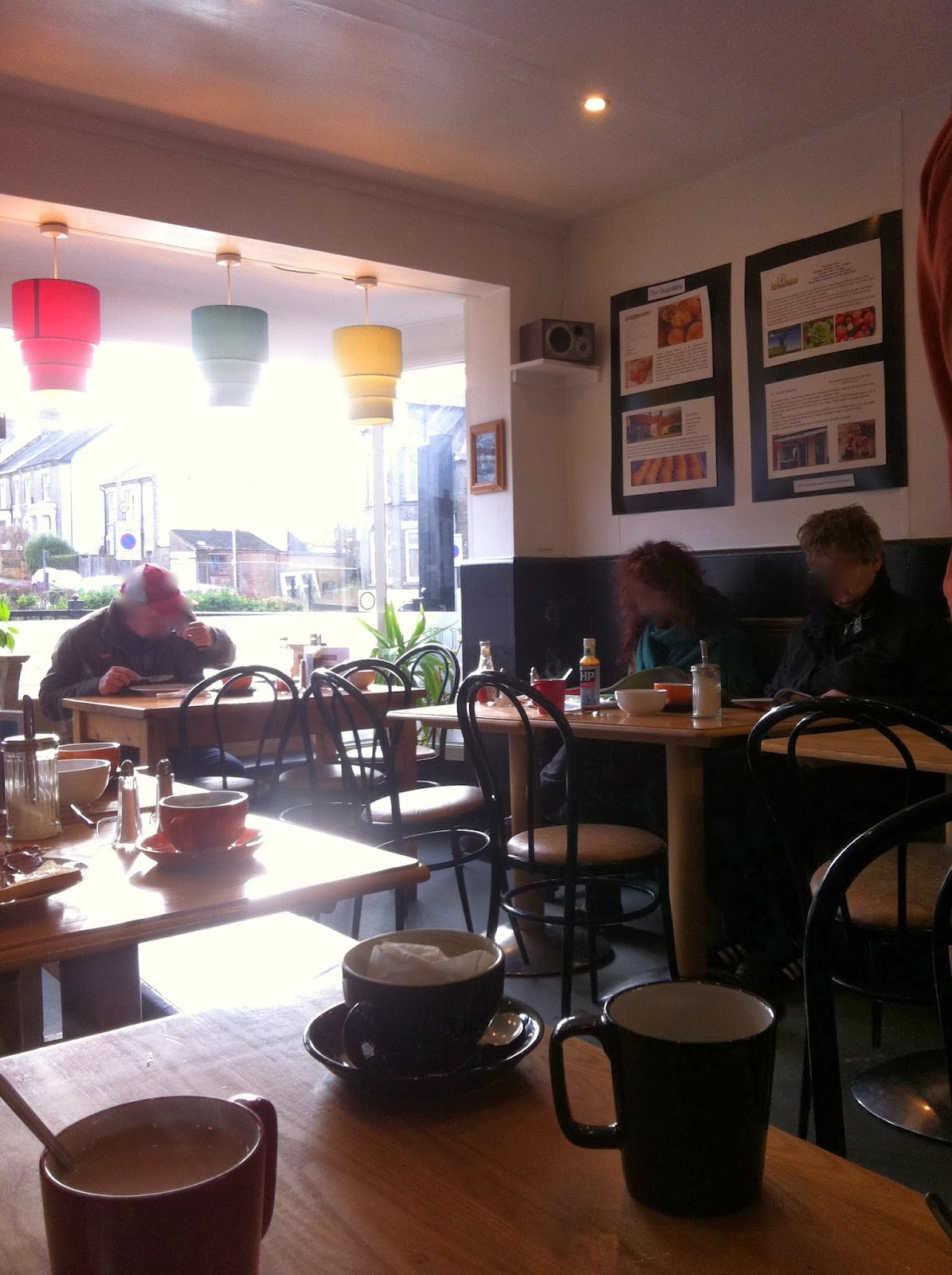 Inside is fairly small with around five tables and can get very busy, the outside decking area is a very popular option in the warmer months. 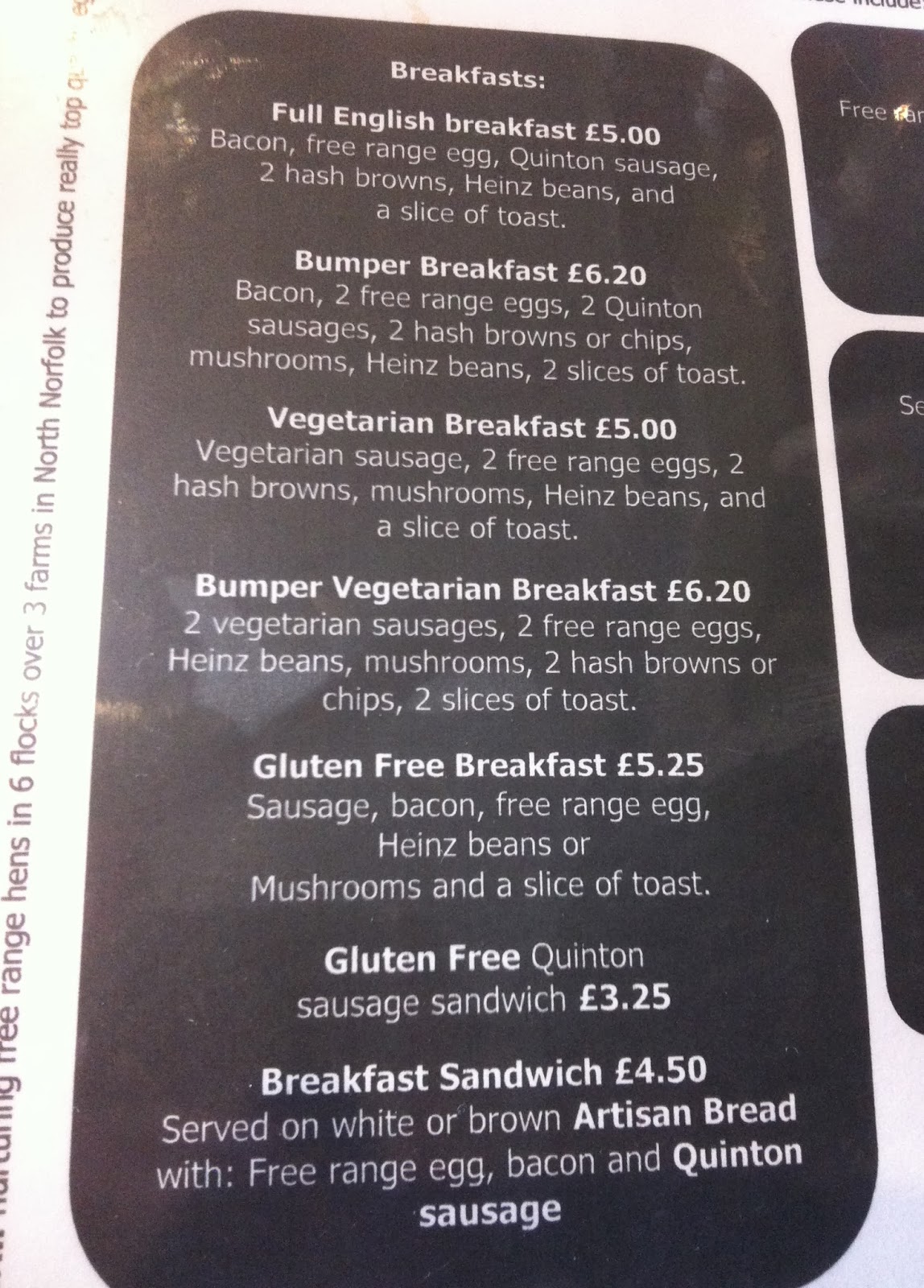 A good breakfast menu that looks after meat eaters, vegetarians and those on a gluten free diet. A nice selection of items make up each breakfast but strangely no tomatoes? 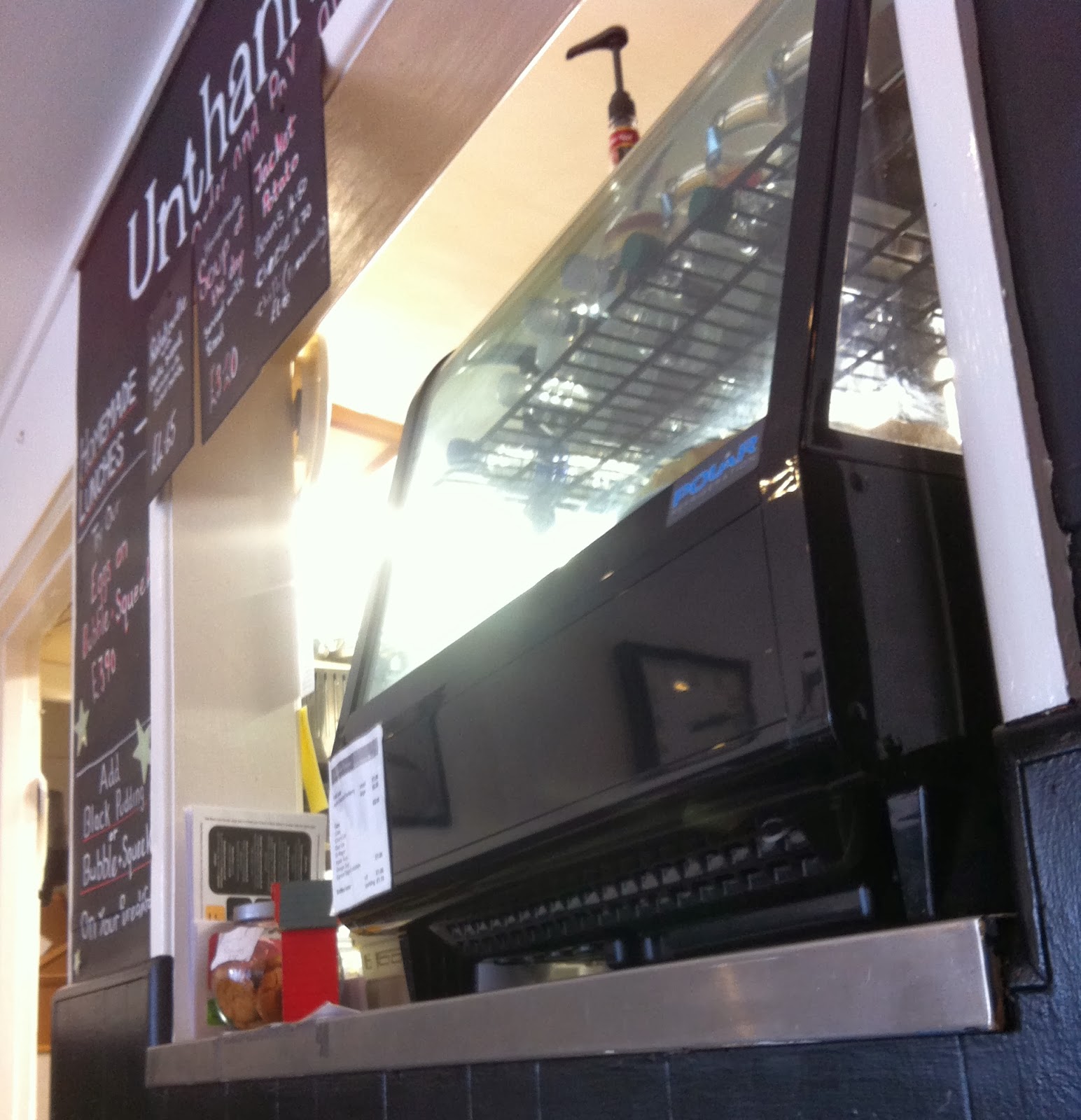 Order your food and pay at this counter, the kitchen is also behind here. The blackboard displayed a tempting proposition "add black pudding or bubble and squeak to you breakfast" I couldn't resist so added both! 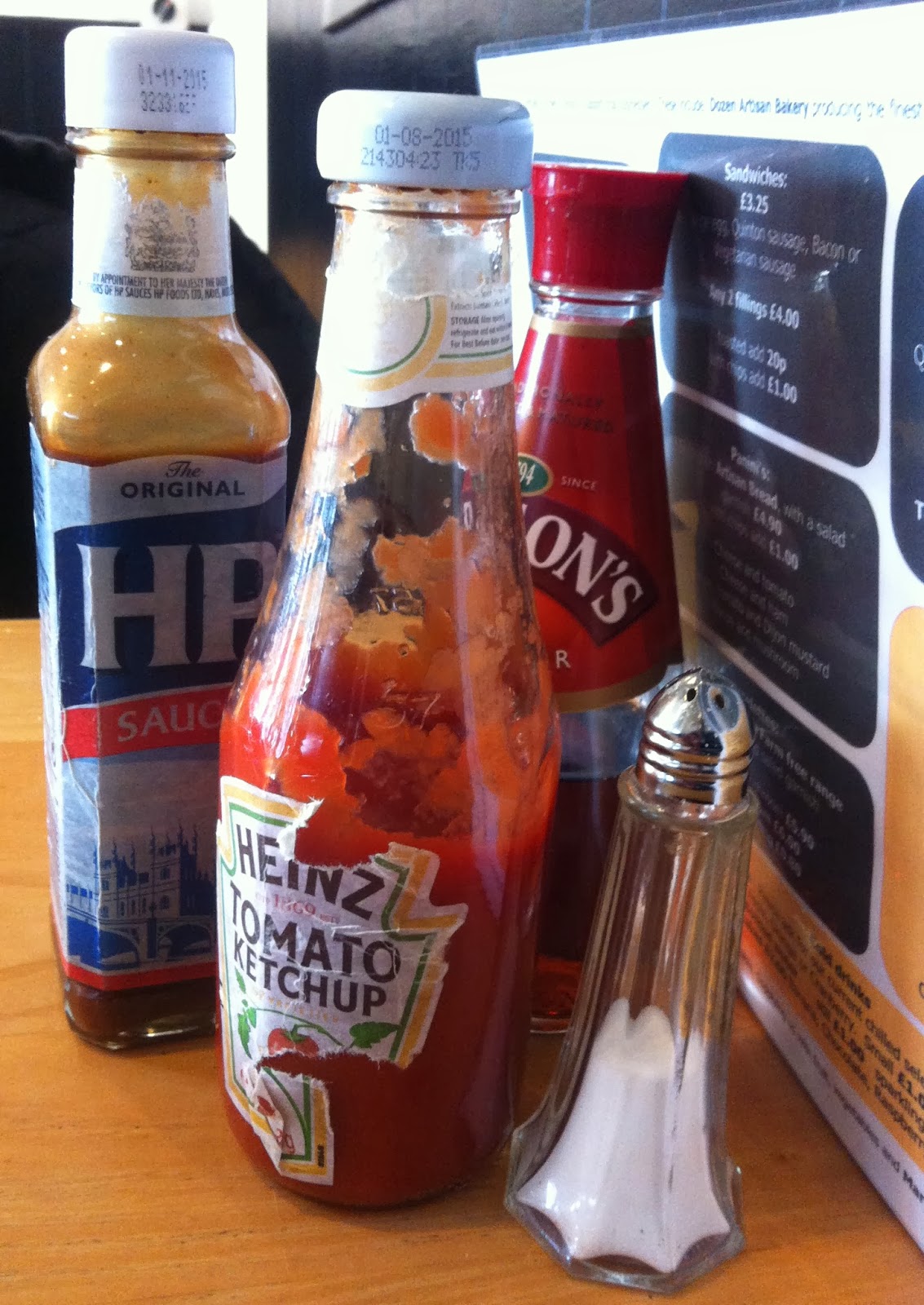 Sauces and menus found on each table. 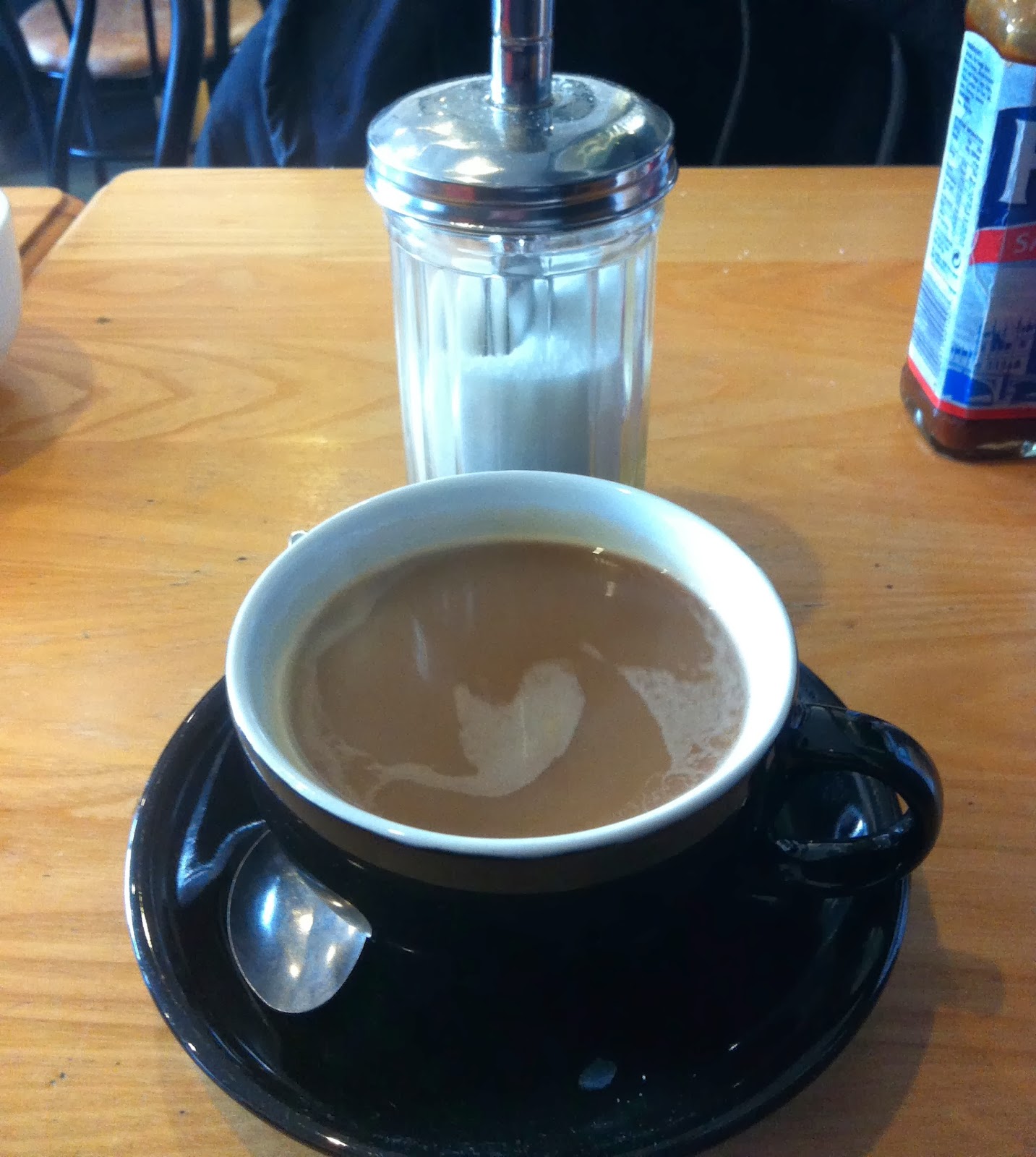 Coffee costs £2 and sugar awaits in a classic pourer. 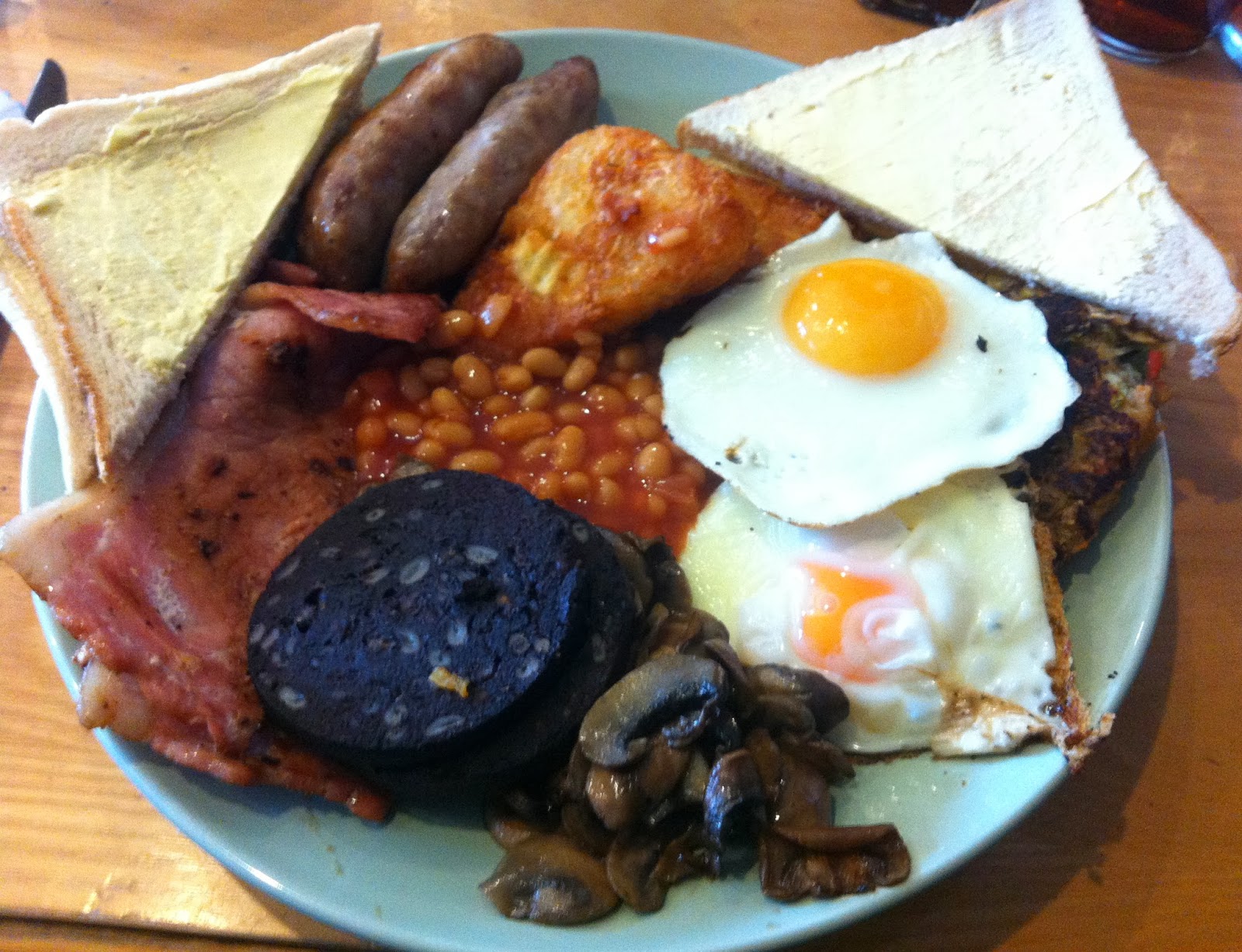 With black pudding and bubble & squeak added to my bumper breakfast I was visually just fried bread and tomatoes away from fry up heaven. 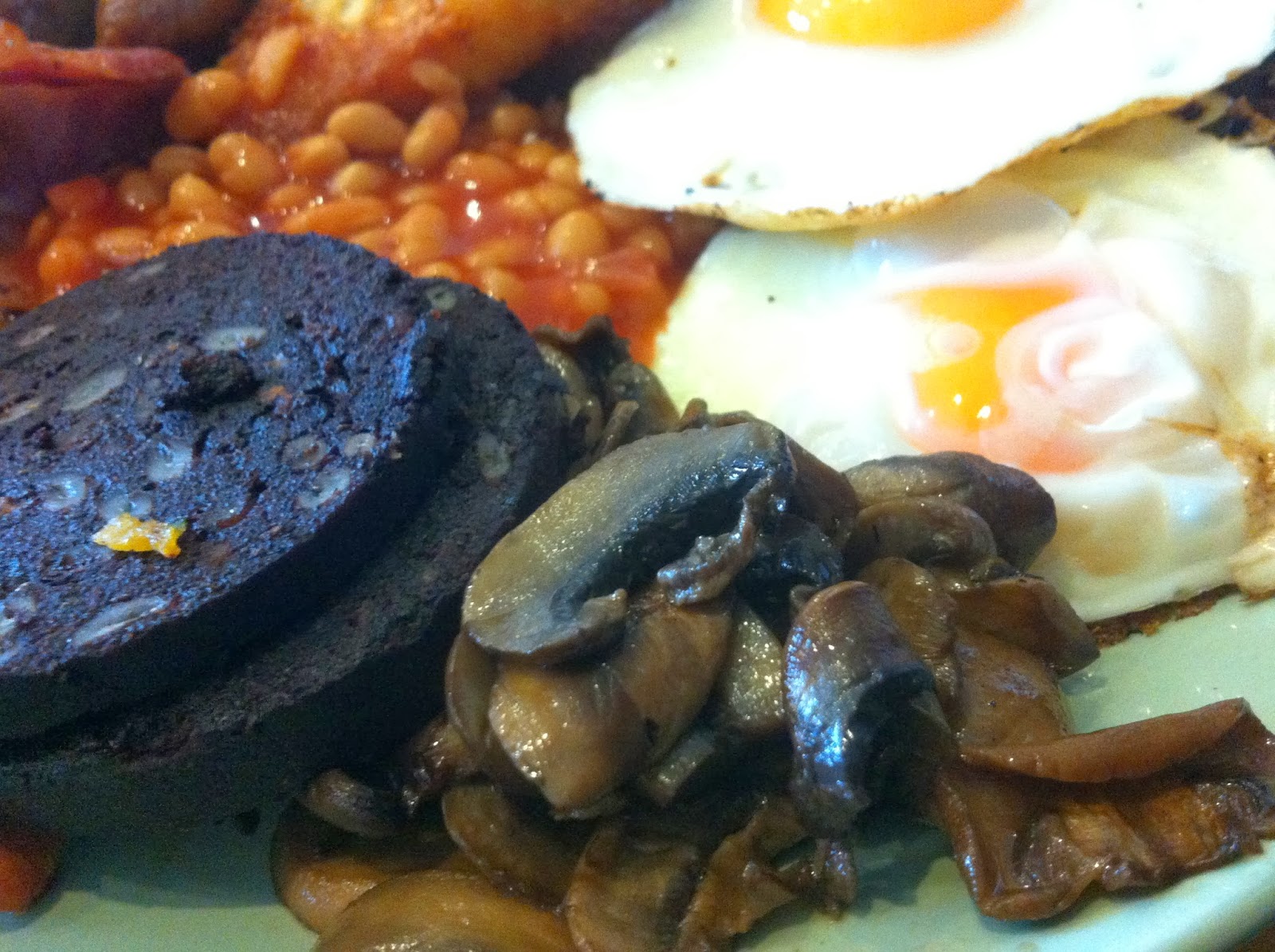 Nice mushrooms and beans with a good consistency. 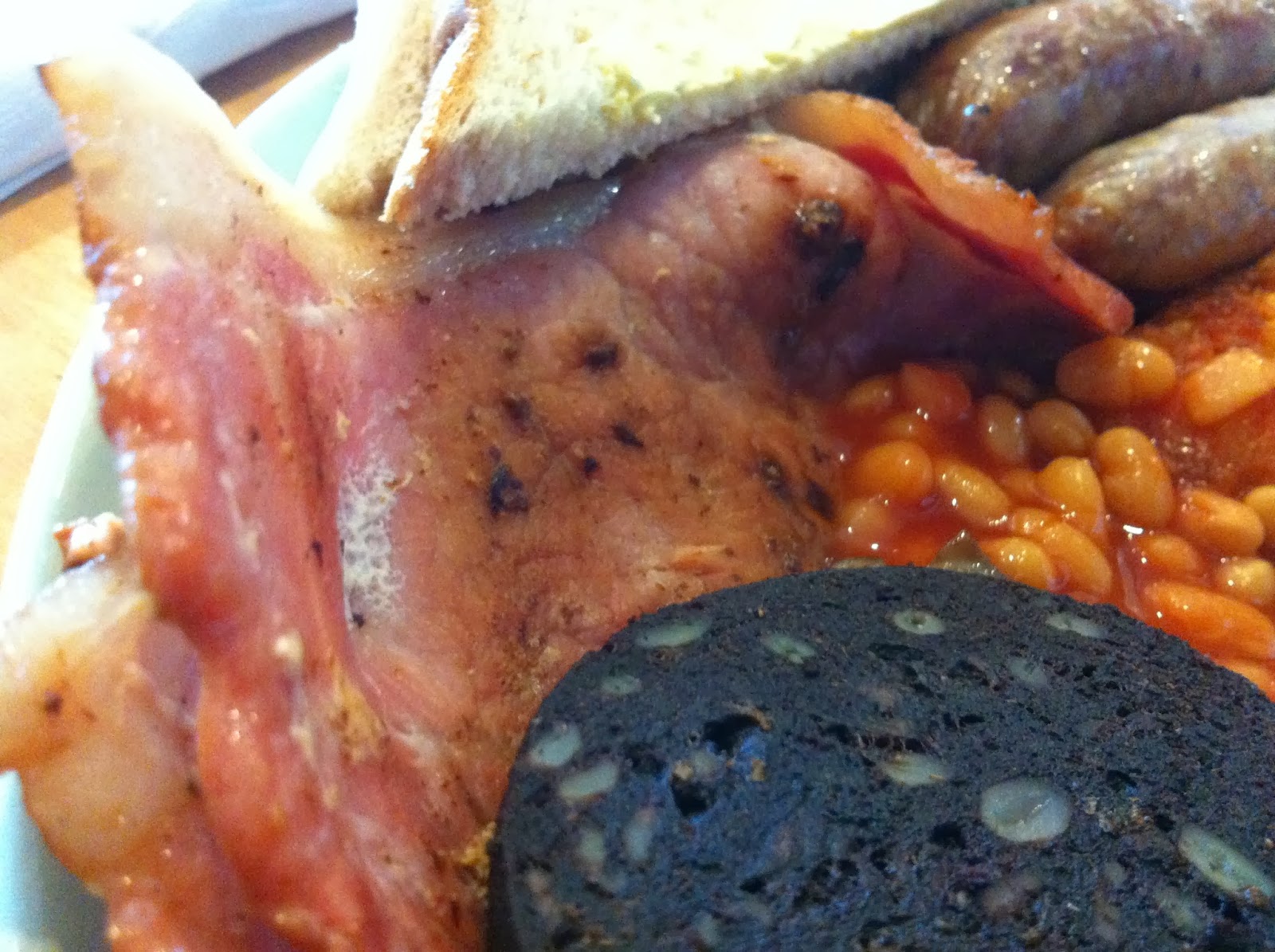 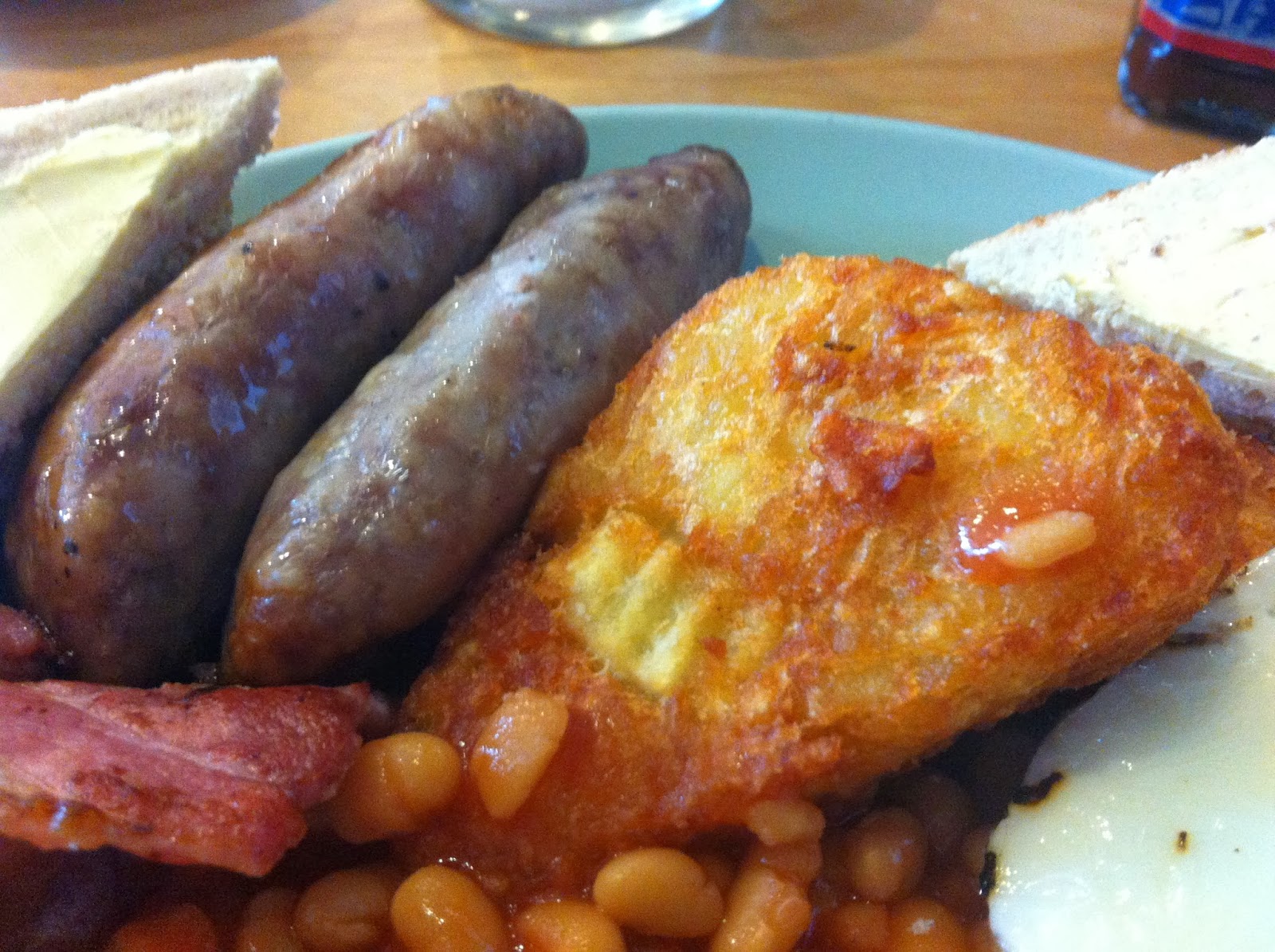 Delicious quality sausages but not very hot, the hash browns were crunchy and piping hot though. 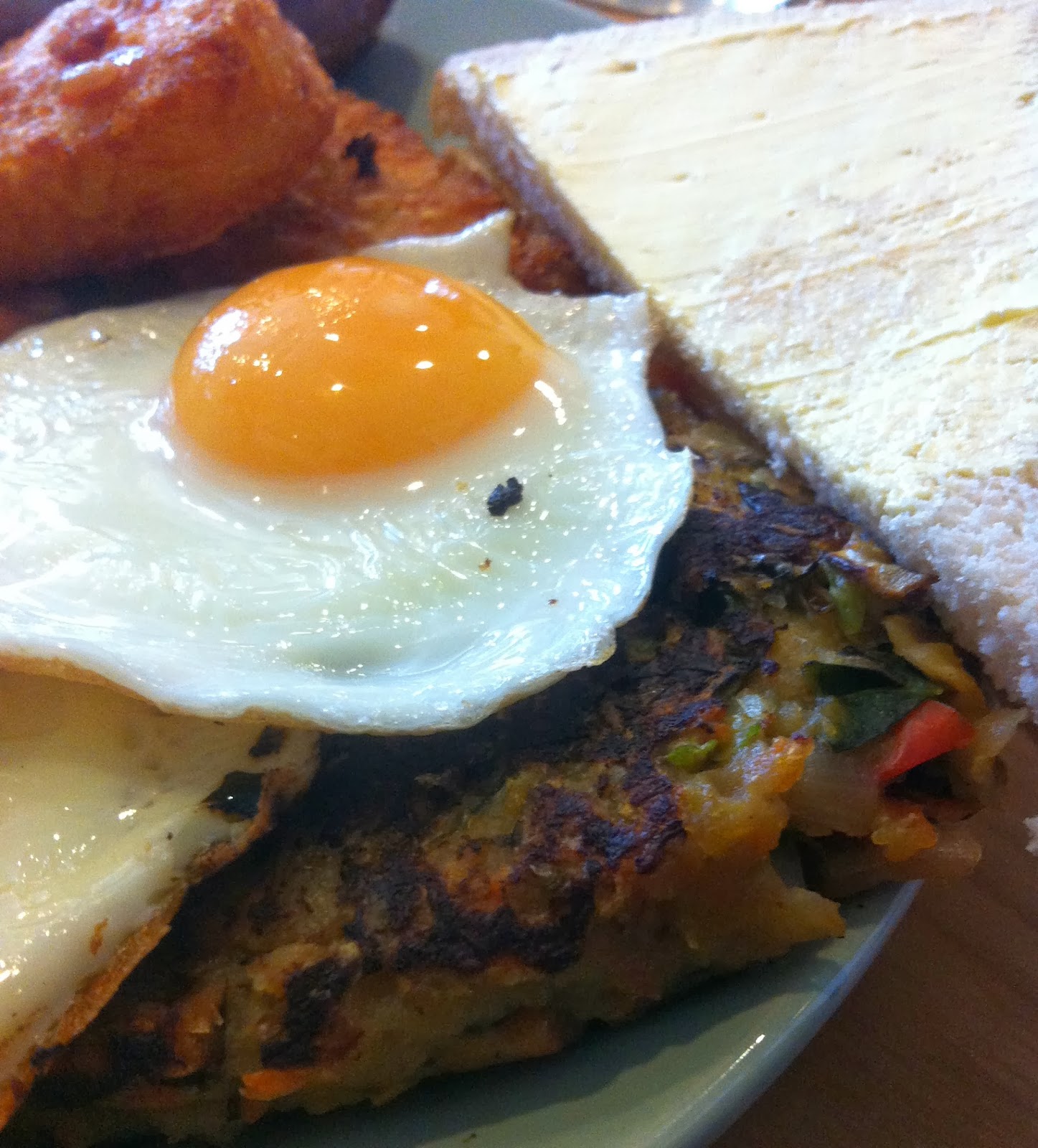 A nice looking fried egg but uncooked egg white could be seen lurking. The toast was underdone and cold preventing the spread from melting, this was a similar issue on my last visit. 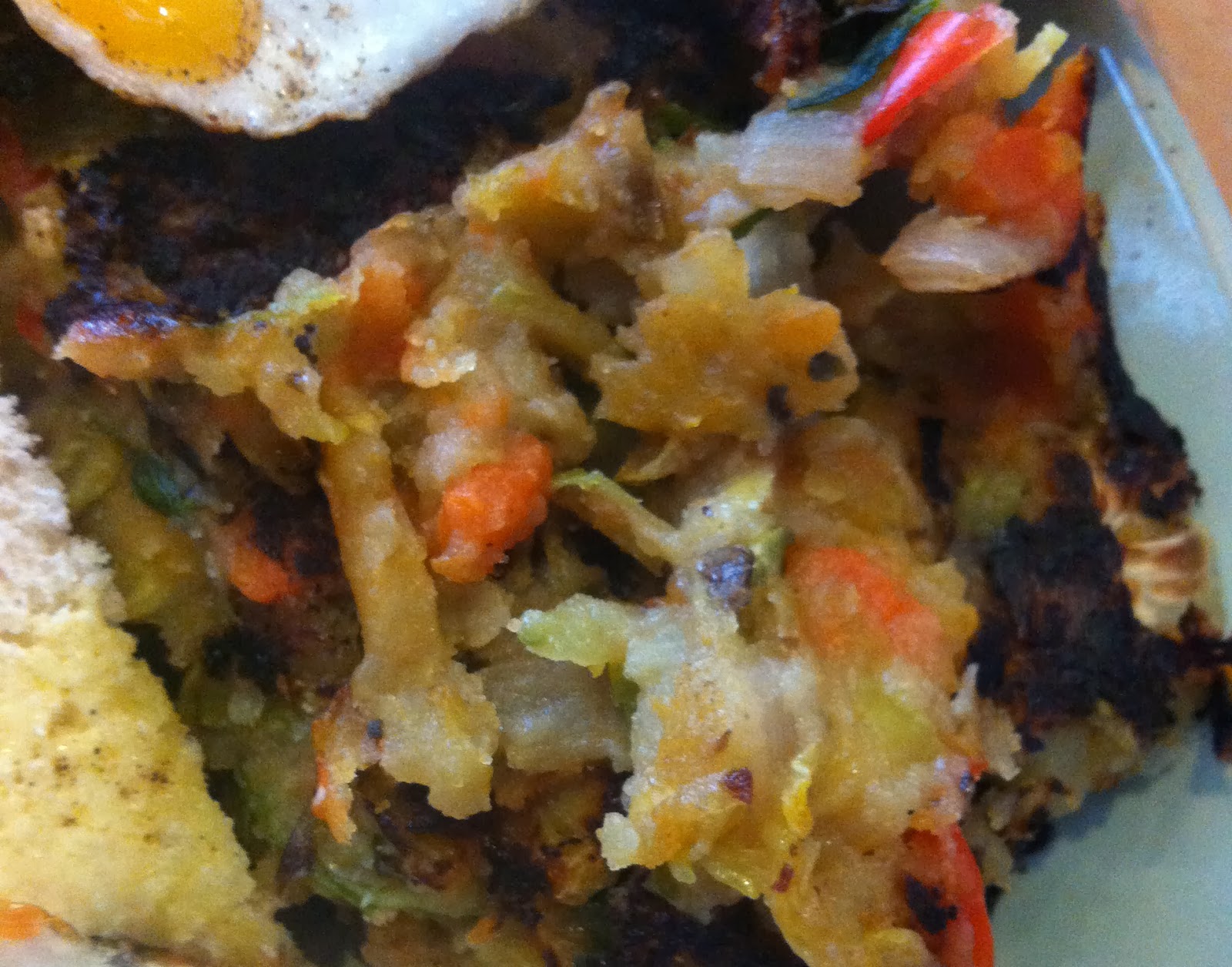 The bubble and squeak was excellent, plenty of flavours going on and a great texture. 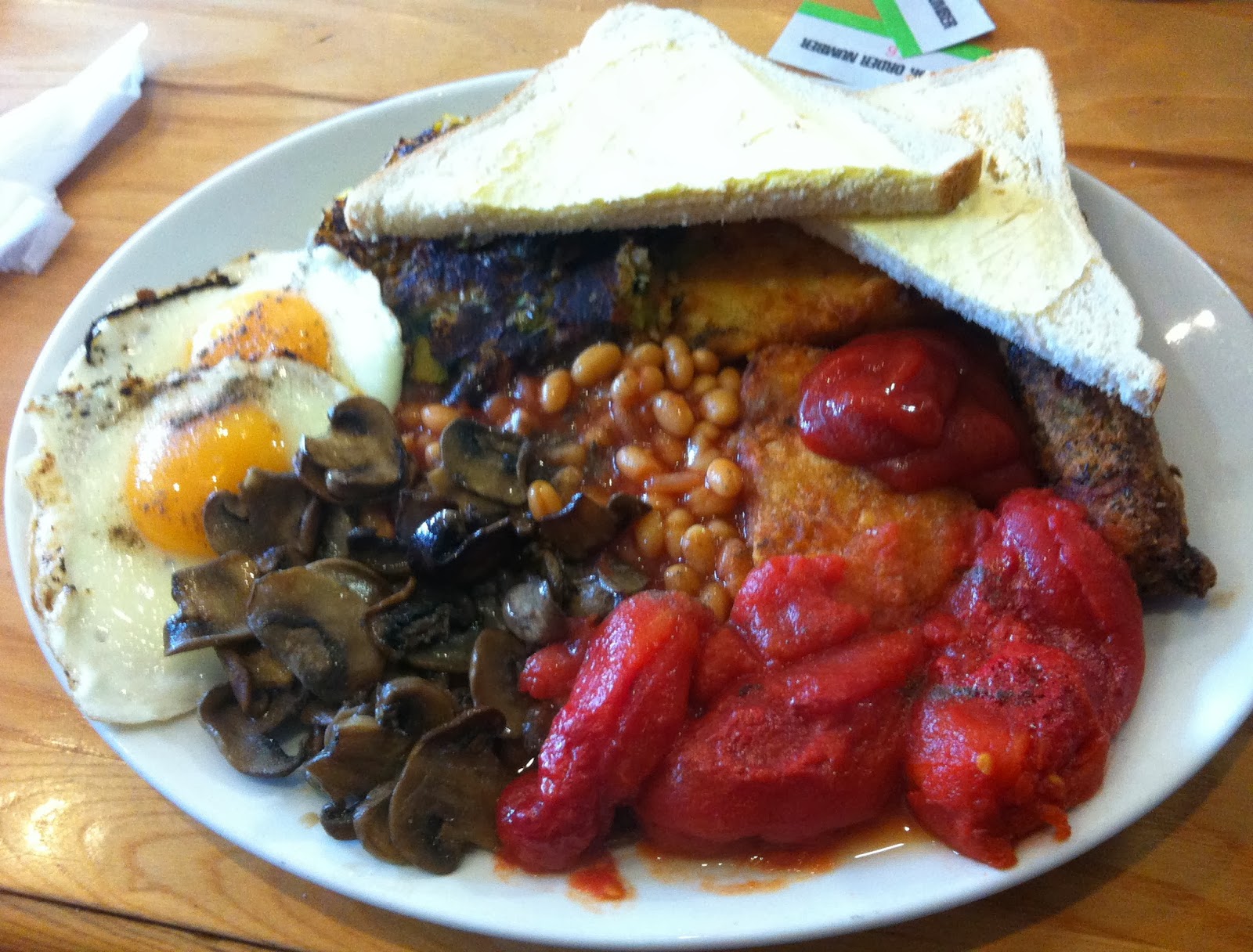 The veggie breakfast, my wife ordered tomatoes (not listed on the menu) and got them!
She enjoyed everything but was not such a fan of the bubble & squeak and had similar concerns to me regarding underdone toast and uncooked egg white.

In June 2010 I visited The Unthank Kitchen in Norwich, it was fry up inspection number seven, read the 2010 write up here. Nearly four years on and I decided it was time to return again and replace my original article with a more up to date version..

Upon entering - The outside decking area is not available during the winter months so we headed inside and although quite busy we were delighted to spot a spare table. There are tables along each side of the cafe and one in the window, each has a menu and sugar, sauces etc. The counter at the rear is where you order and pay, it also lists the opportunity to add black pudding or bubble and squeak to your breakfast but doesn't say how much this costs. Once you have ordered and paid take a seat and wait for everything to arrive. I liked the classic cafe feel inside the Unthank Kitchen with radio on in the background and other customers chatting, I also remember how nice it can be to sit outside in the warmer weather. 7/10

Service - The chap cooking the food looked familiar and I eventually remembered where from, it was Chris from Litebite sandwich bar. We placed our order and picked our table, cups and crumbs from the previous customers joined us for the duration of our breakfast. The food arrived in good time after the drinks, we had forgotten to pick up some cutlery but some was brought over for us. My wife loves tomatoes on her breakfast and although not listed on the menu she asked for some and this was not a problem. We were asked if everything was ok and the plates were cleared away at the end. 7/10

Presentation - A nicely filled and colourful plateful, nice to see the return of round plates too! Possible plate overcrowding with the toast though which may have benefited from more time in the toaster and being served on a side plate. Some raw egg white visible on one of the eggs was a bit concerning but everything else looked great! 7/10

The food - The sausages were good quality with a solid meaty texture and along with the bacon tasted great, neither were particularly hot though. A good pair of eggs with runny yolks but I spotted some uncooked white which is always a tad off putting. The toast needed longer in the toaster but was ok wrapped around some bacon, when I first saw it I thought I had been given bread and butter. The black pudding was piping hot and tasted great, the sliced mushrooms were delicious and the beans had a good thick consistency. The hash browns were golden and crispy but the star of the show had to be the bubble and squeak with excellent taste and texture. 7/10

Value for money - My bumper breakfast with bubble & squeak, black pudding and a coffee cost me £10.10. A good selection of items are on offer here and it kept me going till the evening. 8/10

Overall - Certainly a good option if you are going out for breakfast in the golden triangle area, vegetarians and those on a gluten free diet are well looked after here. Clearly a popular choice as it is often very busy, the outside area does create much more space during the warmer months. I loved the selection of items on offer here but have no idea how much bubble & squeak or black pudding actually costs? Tomatoes are a key breakfast item but don't feature on any of the breakfasts, however my wife did ask and got some lovely tinned tomatoes. Although not perfect certainly a good breakfast with the bubble and squeak stealing the show for me. 7.5/10