Breakfast served everyday from 9am till midday 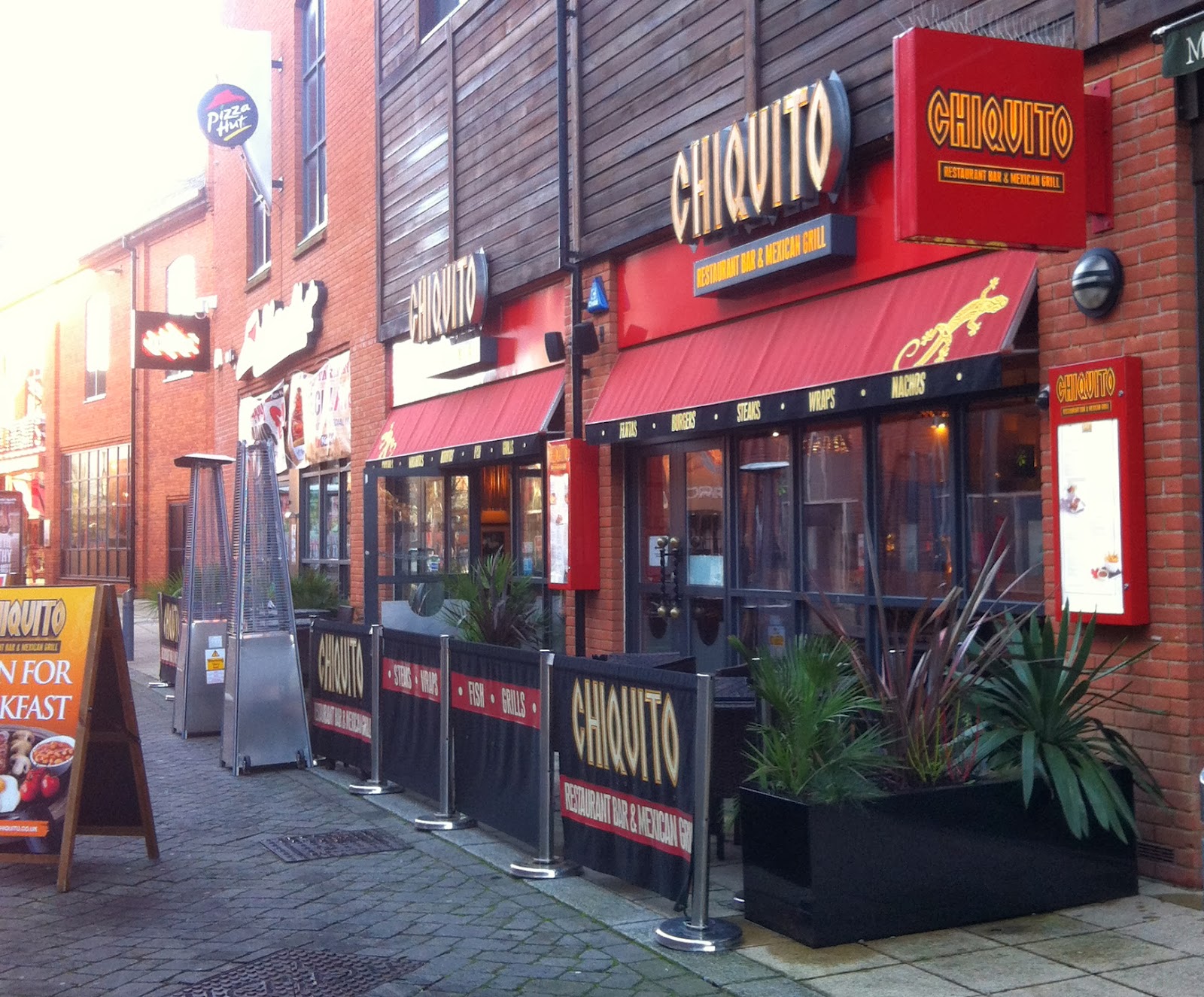 To celebrate breakfast week Chiquito were offering a free sizzler breakfast when presenting a voucher which was available online. 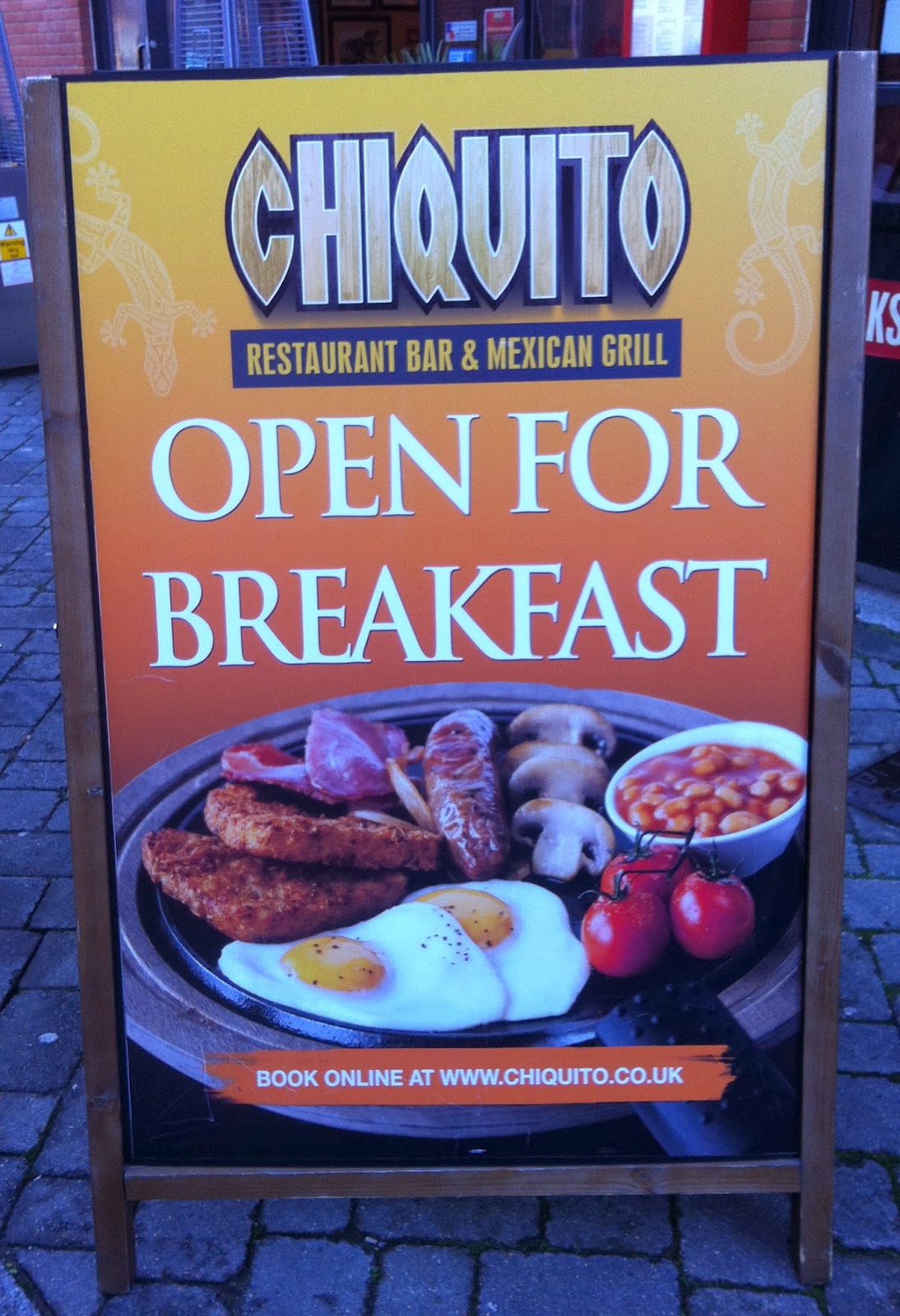 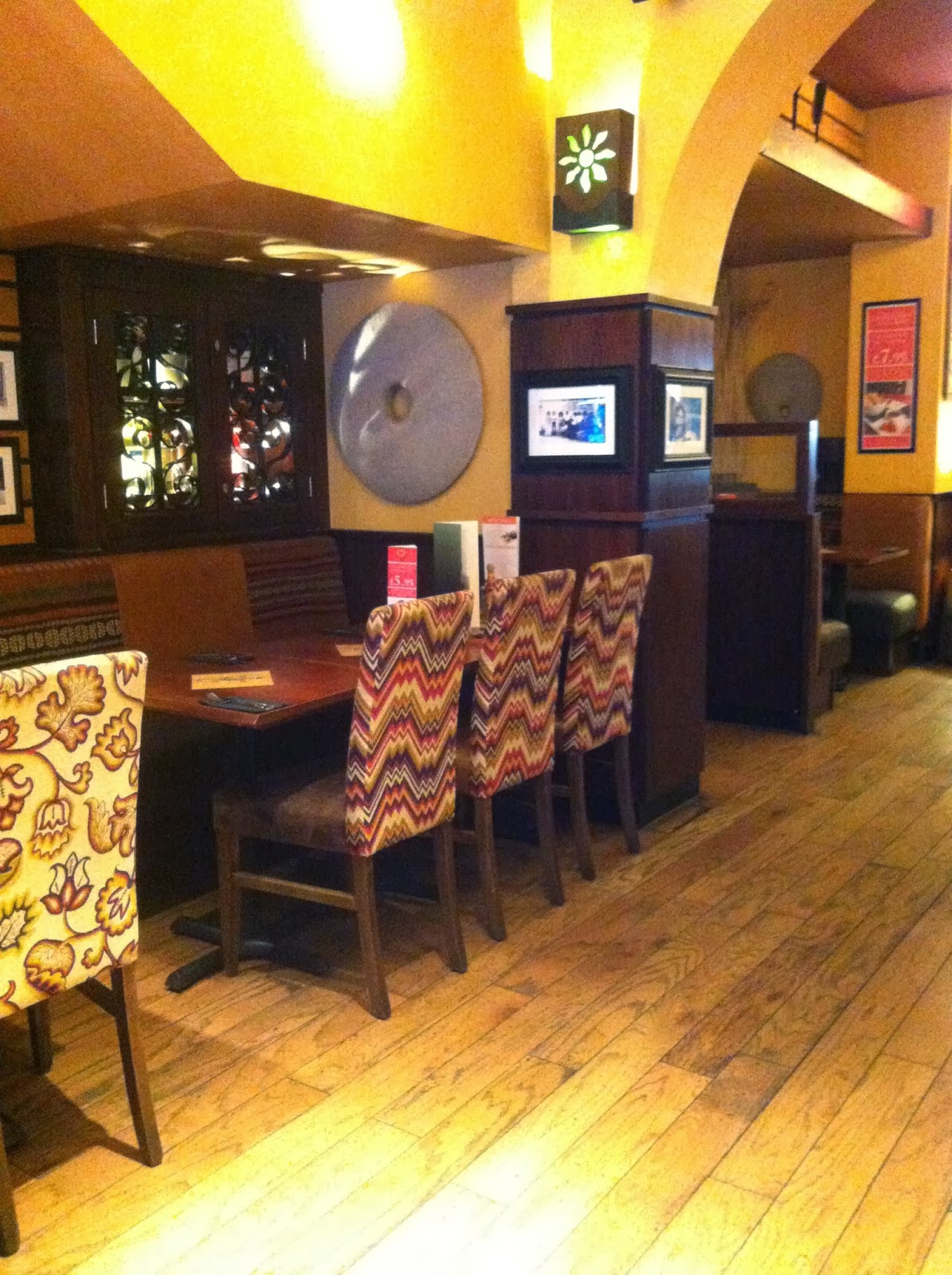 The Mexican themed restaurant is very big with plenty of seating. 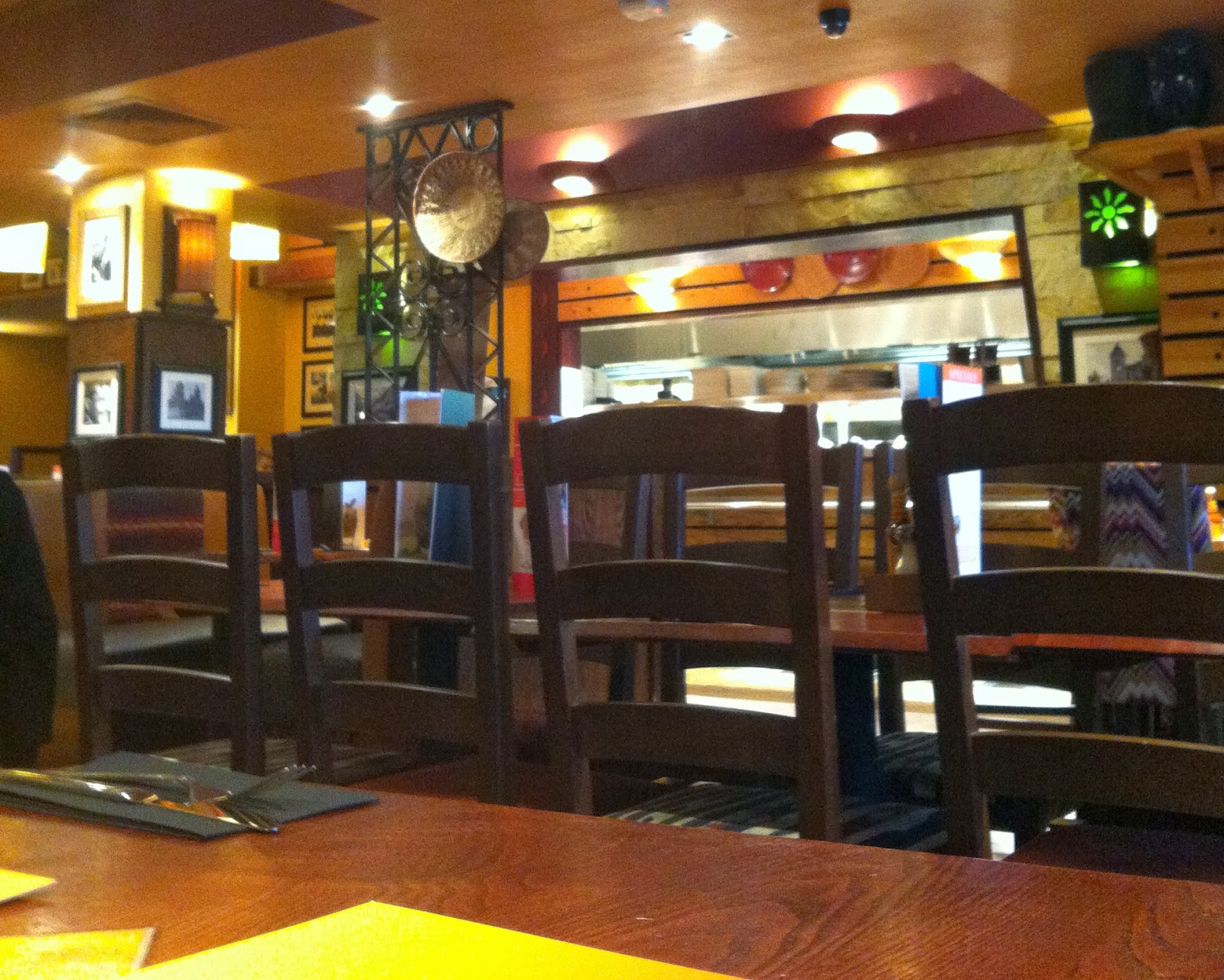 In the centre were larger tables suitable for families or large groups, towards the rear was the kitchen which looked out onto the dining area. 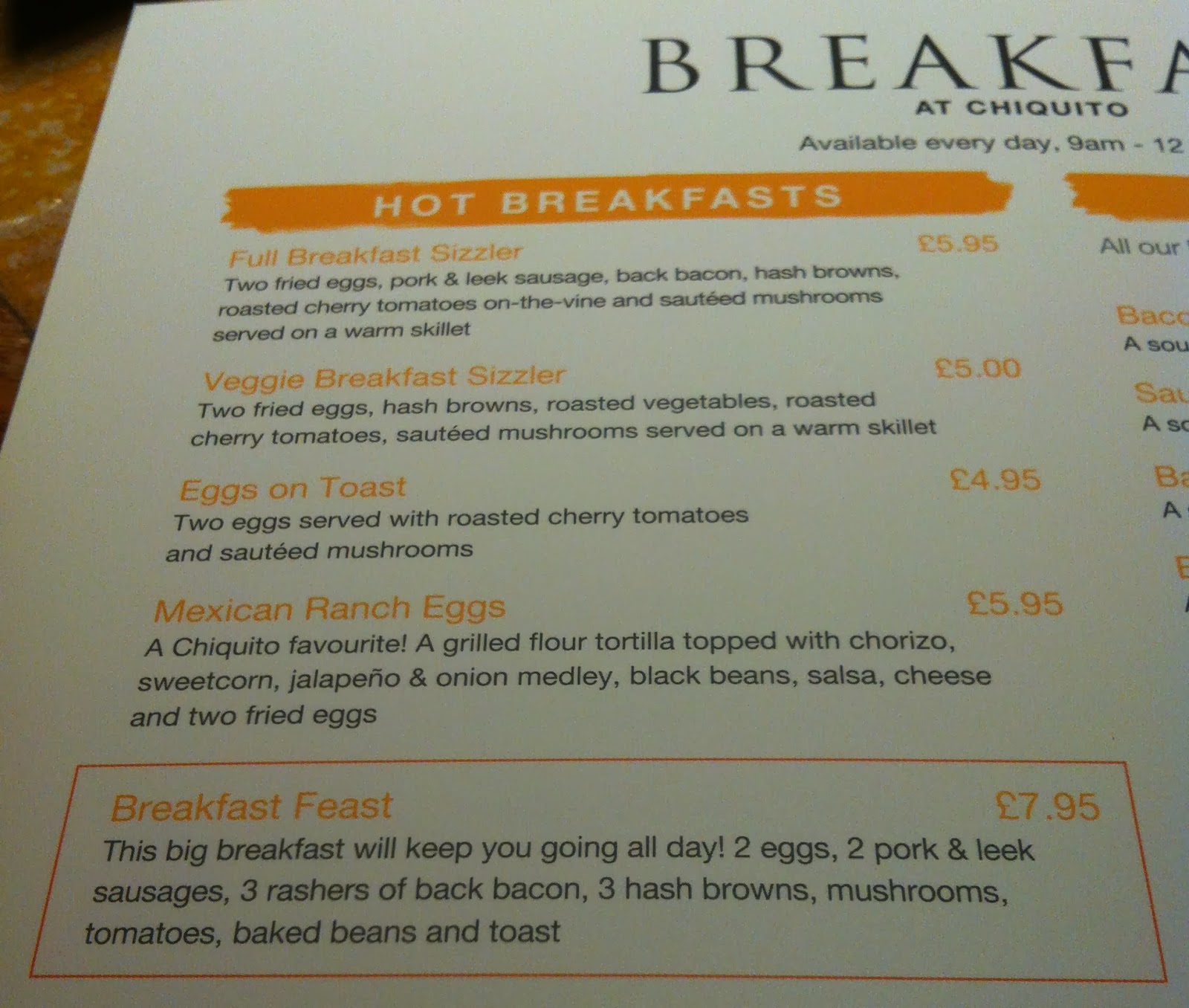 The breakfast menu is kept quite simple and offers something for vegetarians and those with a bigger appetite. 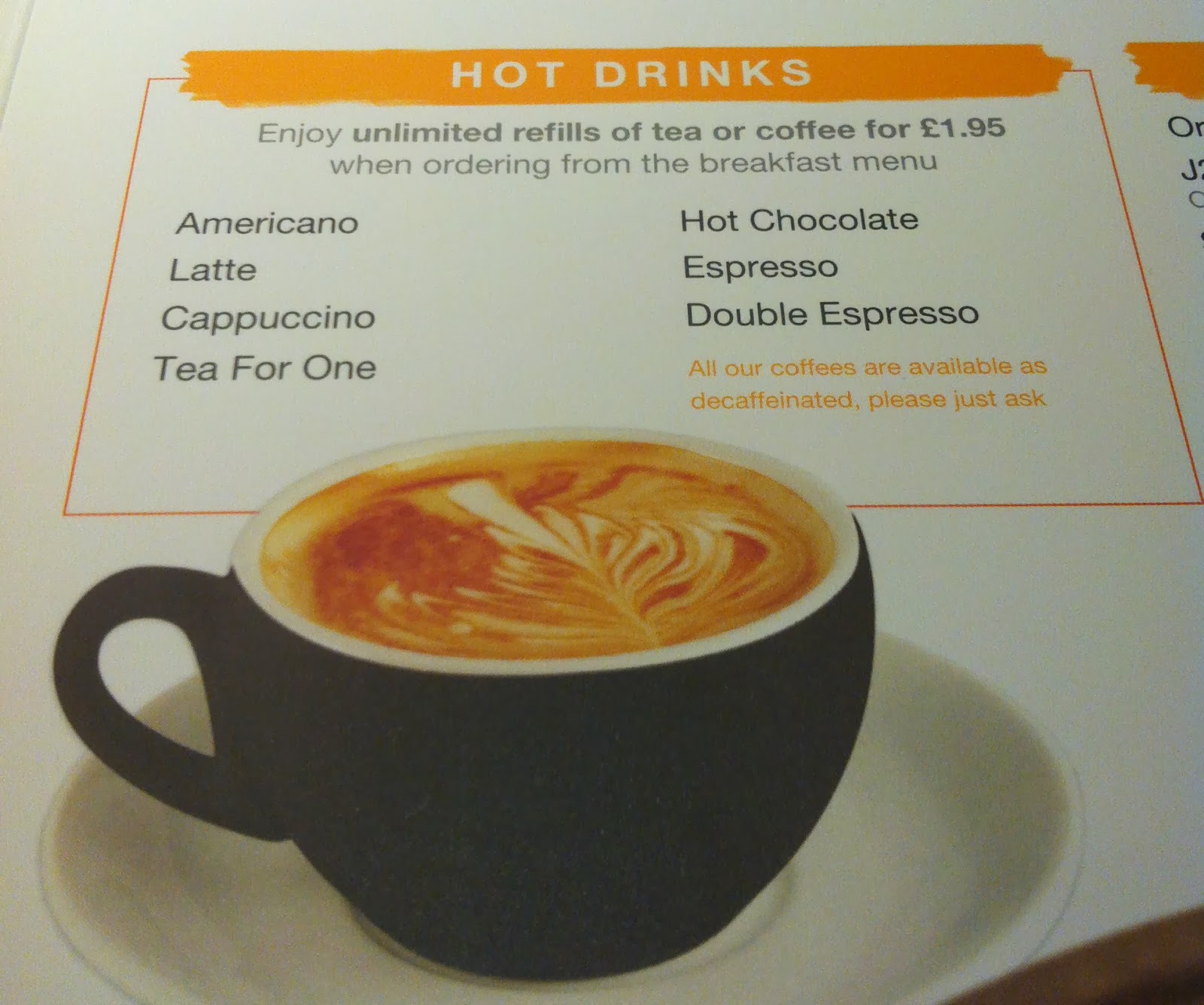 The drink refill situation seemed like a good idea! 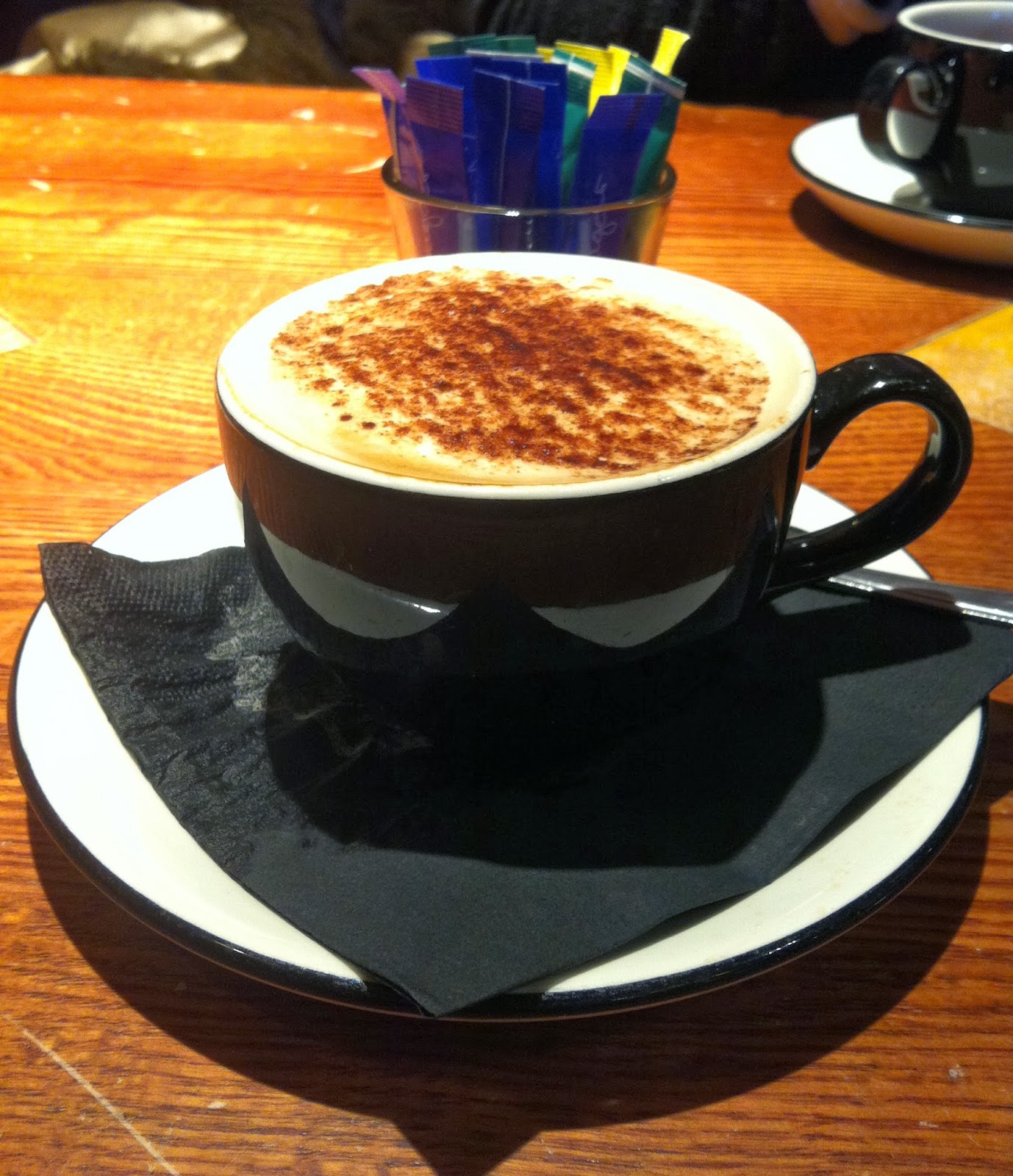 The cappuccino wasn't very special though, it reminded me of the instant stuff you get in sachets, this made the prospect of a refill less exciting. 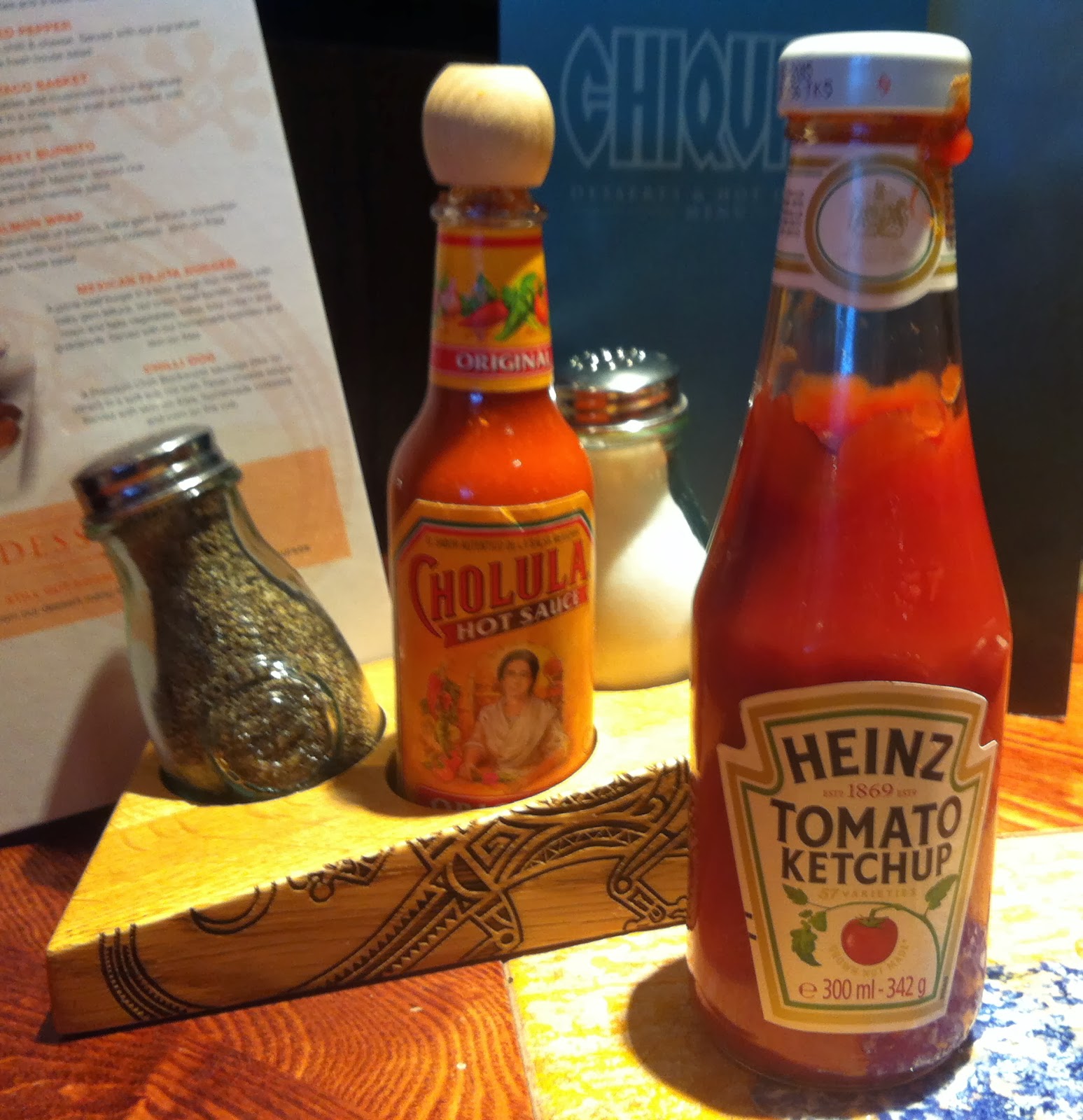 I am not a fan of spicy sauces but Heinz ketchup made me happy. 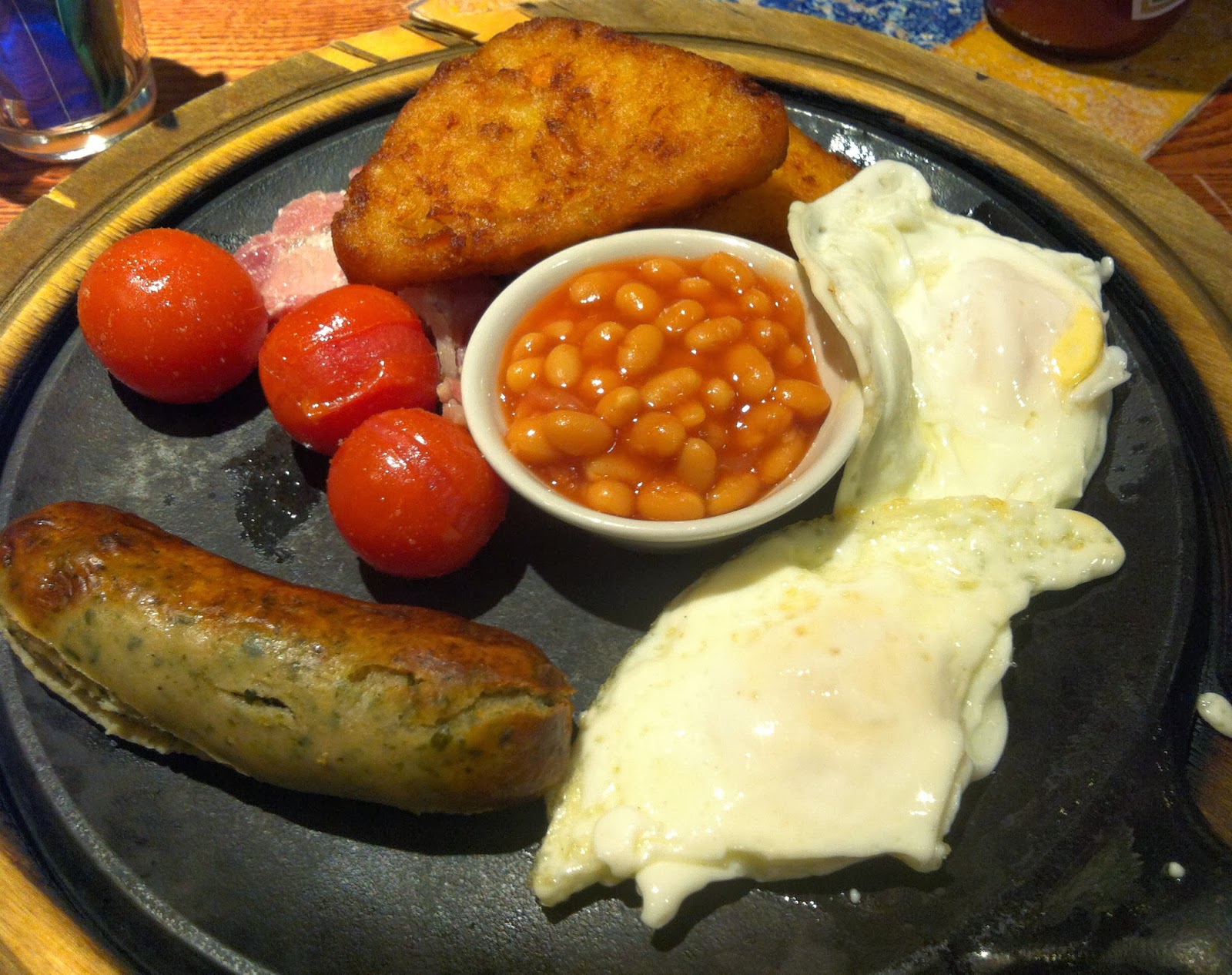 Hmm.. Not quite like it looked in the photo and not exactly sizzling either! 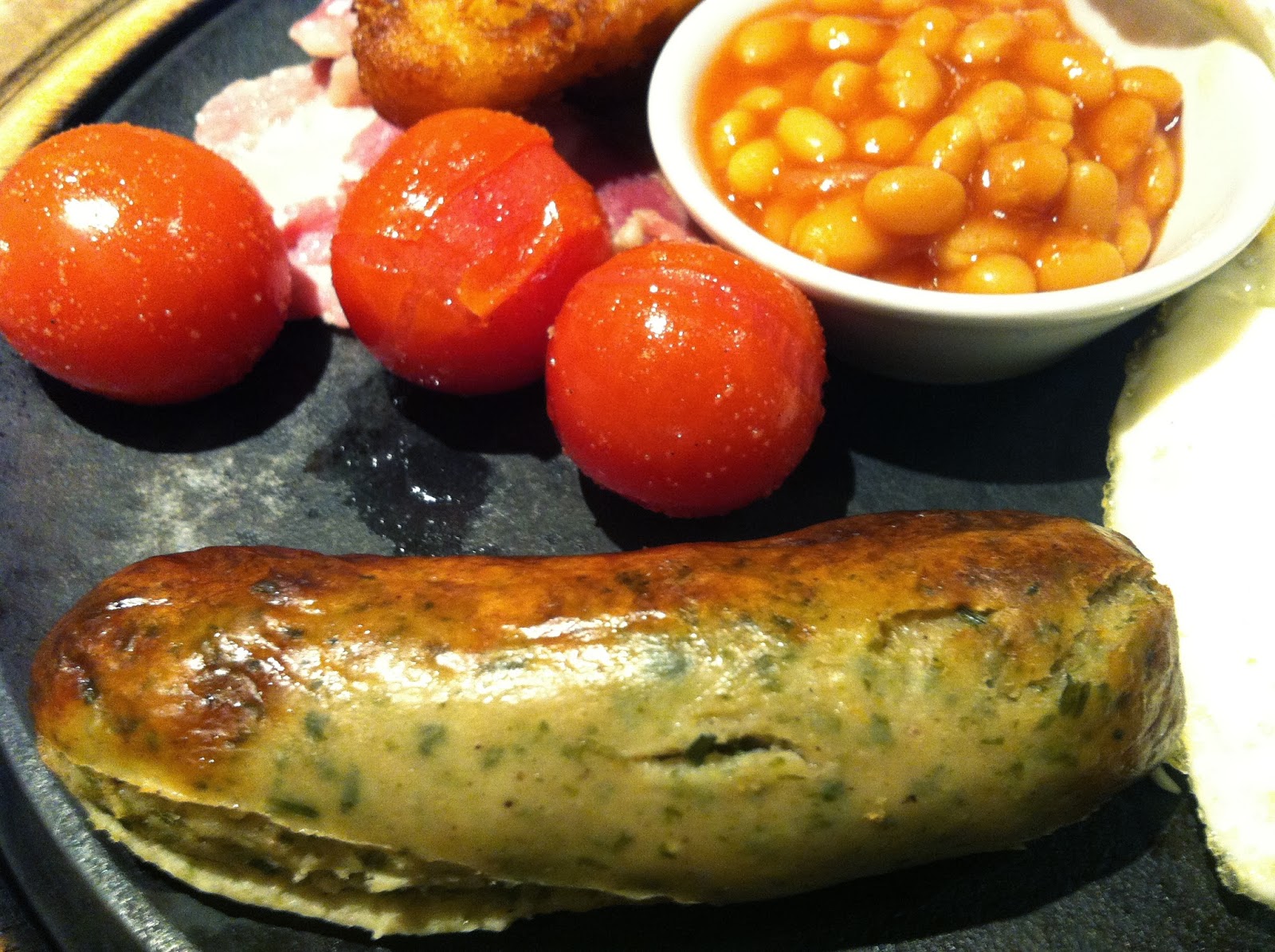 The cheapest pork and leek sausage I have ever eaten, the texture was so wrong. 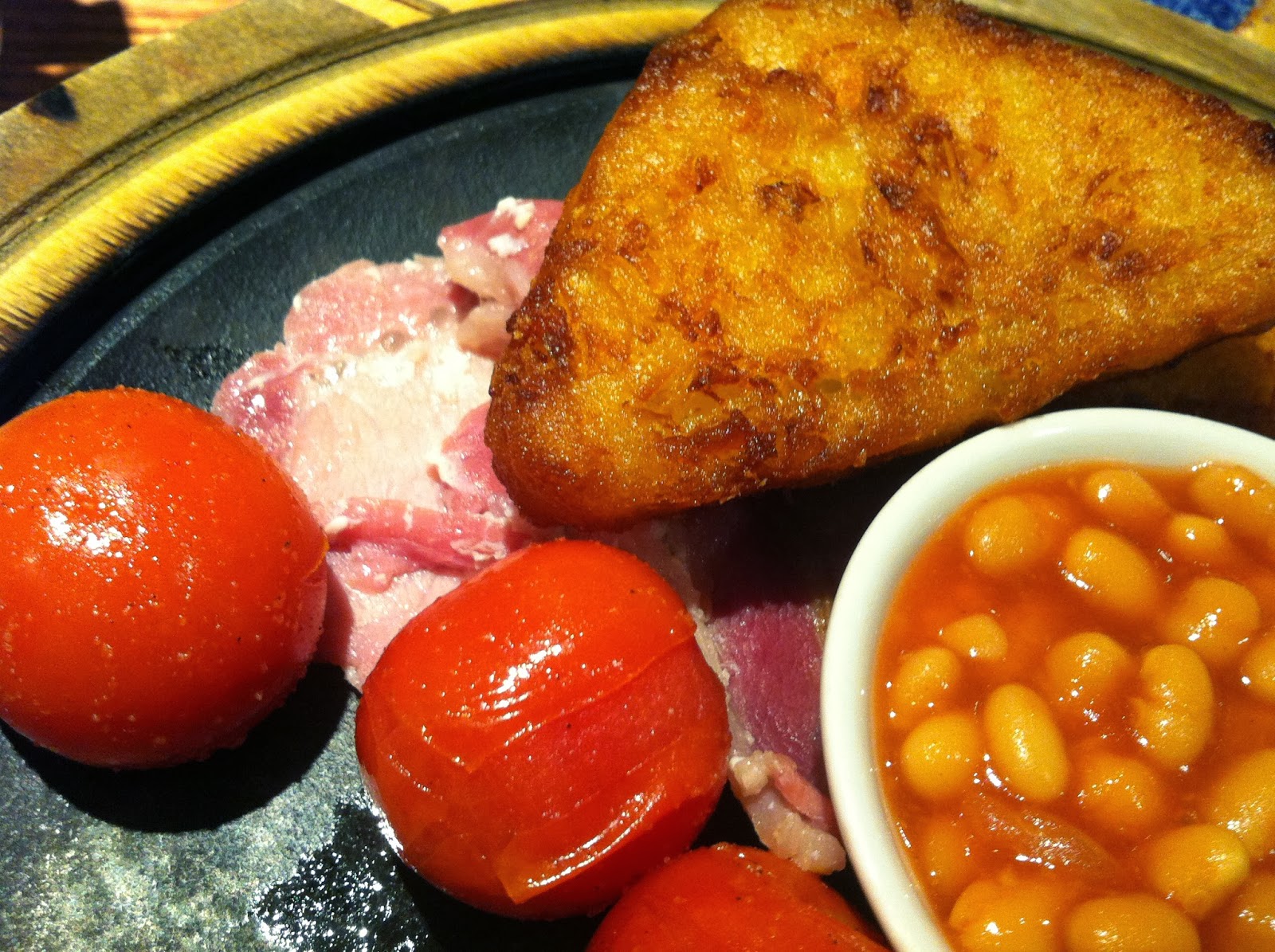 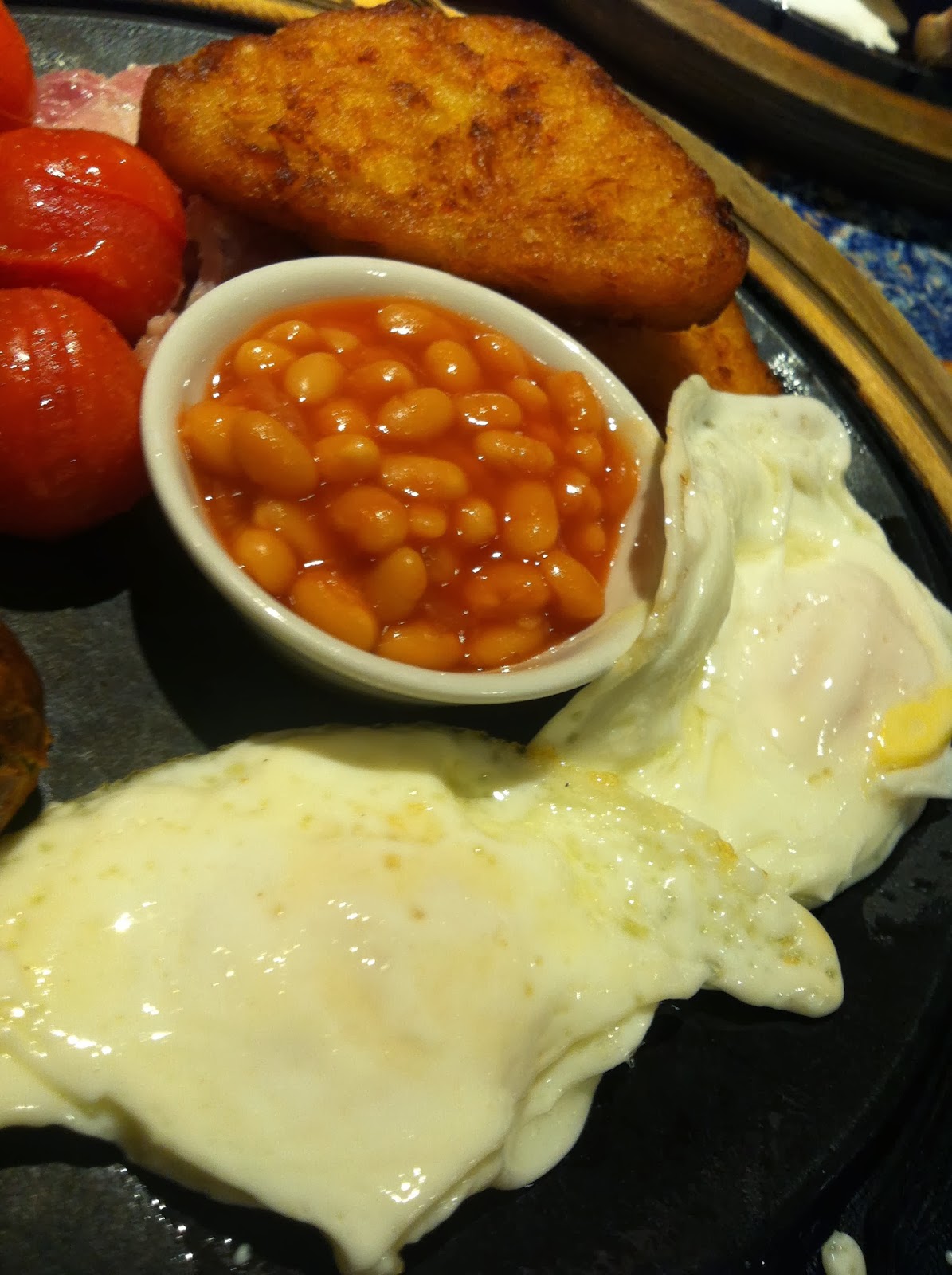 The fried eggs tasted good but were not very pleasing to the eye. 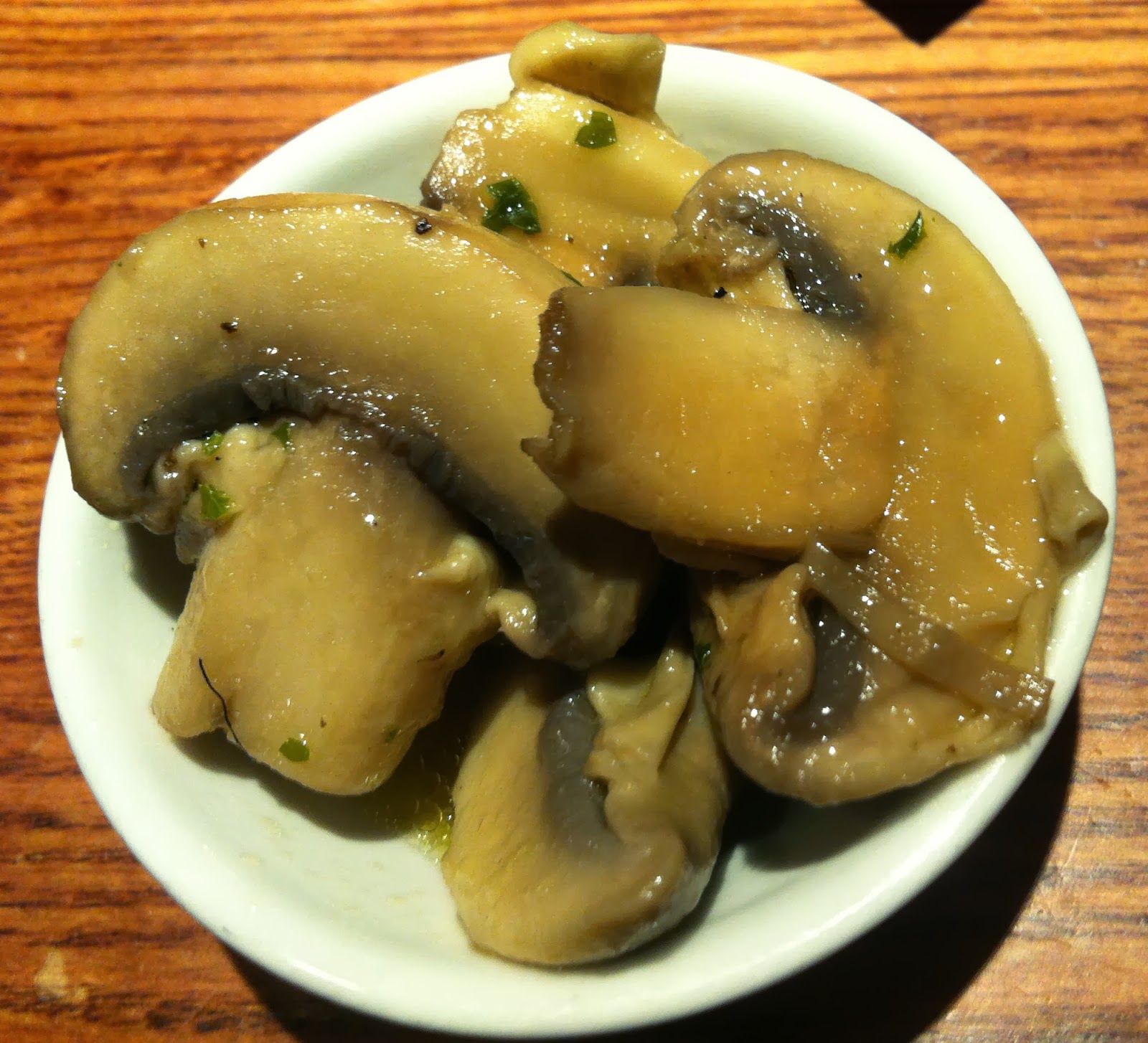 The forgotten mushrooms arrived in a small bowl, I had mixed feelings about them, they tasted great but did I want garlic with my breakfast? The slimy texture reminded me of tinned mushrooms but maybe this was due to them being sauteed. 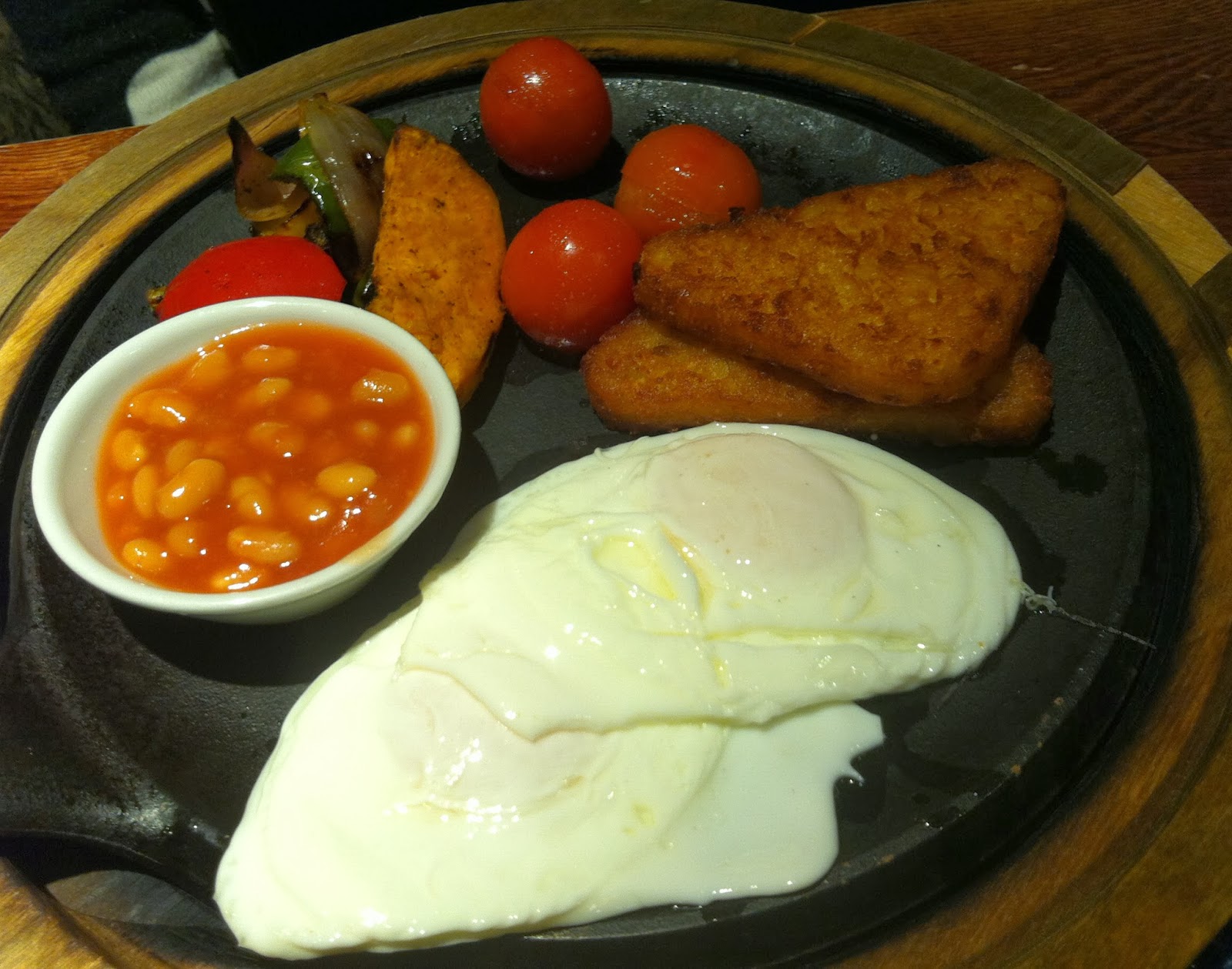 My wife's veggie breakfast was looking a bit sparse but the eggs were looking a tad better than mine at least. 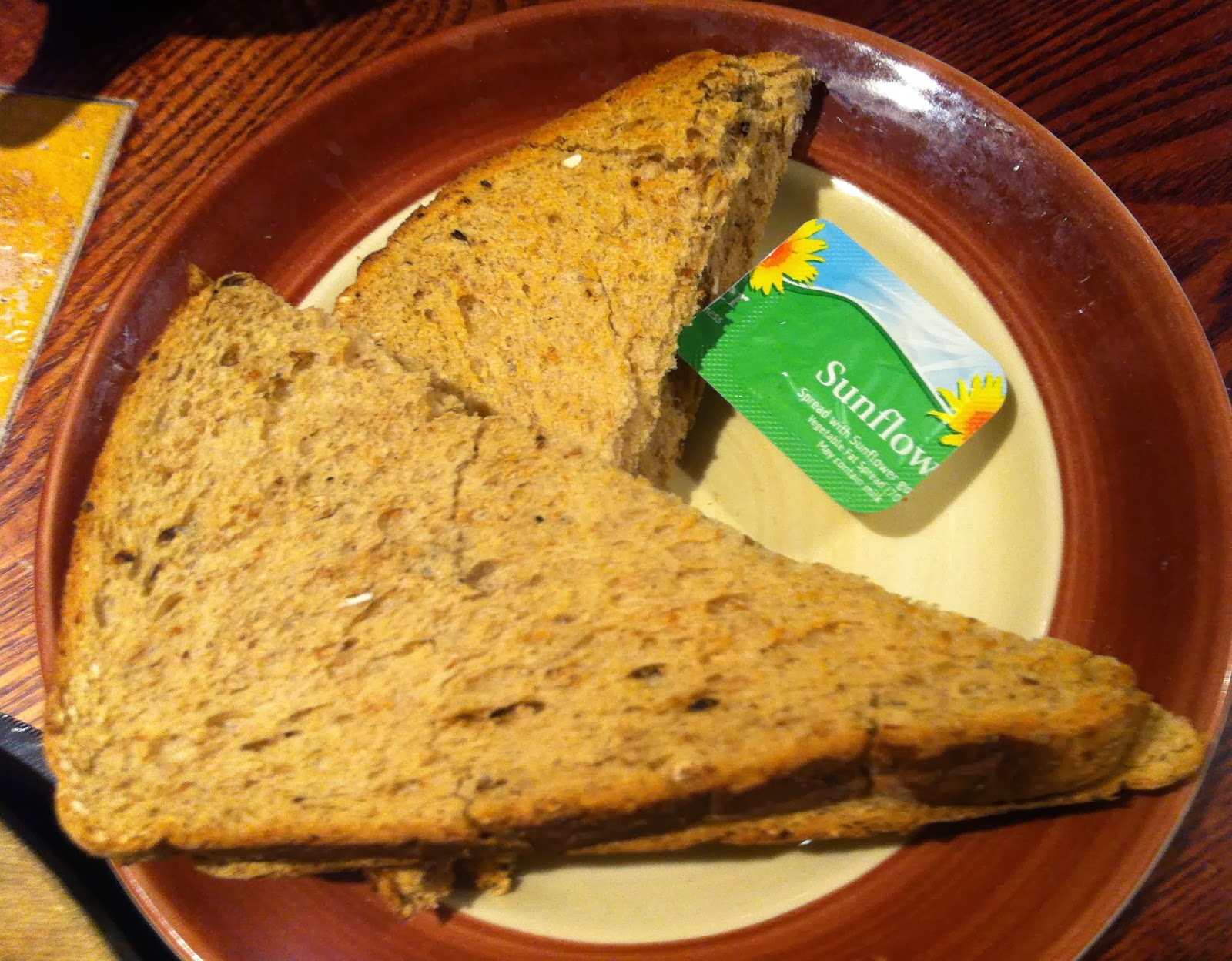 Toast cost £1.50, a reasonable price but not enough sunflower spread arrived for 2 slices and butter would have been much nicer.

Somebody posted a link to the Chiquito free breakfast offer taking place on 1st and 2nd Feb on my facebook page. I had already visited Mandy's Diner in Brooke so decided to make it a double inspection weekend. I couldn't resist inspecting this free breakfast offer so booked a table and went along with my wife. I will base the review on the usual price of the breakfast.

Upon entering - Very similar to all the other large restaurant chains found in retail parks all over the country, this one has a Mexican theme. It offered a selection of different sized tables with menu's, cutlery, hot sauce and salt & pepper found on each one. A full table service awaits you so no need to leave your seat unless you need the toilet or decide to leave. Ketchup is available on request and comes in a bottle. 6/10

Service - A number of different waitresses took care of us during our visit, all were cheerful and helpful. We were shown to a table and given a few minutes to decide what we wanted, shortly after that somebody returned and took our order. I had recently decided to time how long breakfasts take to arrive from ordering them but since changed my mind about adding this to my reviews. Just out of curiosity though I started my stop-watch incase we were in for a long wait! The drinks arrived first and 10 minutes 45 seconds after placing our order the food arrived. Something didn't look right about the breakfasts though, the presentation was not great but something was missing, my wife solved the puzzle by realising the mushrooms were nowhere to be seen! We called the waitress back who apologised and returned quite quickly with them in tiny bowls, the same type used to contain the tablespoon of beans. I was curious as to whether we would be offered a drink refill and was delighted that when asked if the food was ok we were also offered more hot drinks. As the plates were taken away we asked for the bill which arrived fairly quickly. Considering it was quite busy (with many taking advantage of the free breakfast offer) the service was good. Just a shame that the missing mushrooms were not spotted during transit. 7/10

Presentation - When a breakfast called "sizzler" arrives on a warm skillet but isn't that hot disappointment begins to set in. Then when you compare what is placed before you to the picture advertised on the sign outside the sinking feeling sets in even deeper, here is a reminder.

It just didn't have the same slick looking placement on the skillet as was seen on the poster outside, it had been popped on the skillet by somebody turning a blind eye at a few imperfections. The sausage was looking dry and tired with split skin and the bacon portion was so small it hide in shame underneath the hash browns, these looked ok though. The eggs were looking rather sorry for themselves and not in great shape, the yolk was barely visible. The mushrooms looked nice when they arrived and the cherry tomatoes were a nice shade of red but had arrived at the party minus their stems. 4/10

The food - The pork and leek sausage had the texture of a tinned hot dog sausage, really soft and easy to cut through. The taste was ok but this strange textured meat cylinder is one I would be happy to never encounter again. I had to really focus on tasting the bacon as there was so little and it was gone in a flash, my conclusion was undercooked but a bit chewy. The hash browns were probably my favourite part of the breakfast with soft textured centre and crispy outside. The fried eggs despite their unimpressive appearance did have a nice runny yolk and tasted good, I enjoyed them on the toast which could have benefited from a tad longer in the toaster. The beans were hot but the sauce consistency was very thin and this could have been the smallest portion I have ever been served, I wish I had counted them now! The mushrooms were quite slimy textured but garlic on a full English is a bit of an acquired taste, on this occasion I enjoyed them but had I been hungover I would have been far less keen. 4/10

Value for money - The full breakfast sizzler costs £5.95, 2 slices of toast cost £1.50 and hot drinks with refills cost £1.95. Reasonable prices and loving the drink refills but nothing seems that special so not exactly bargain of the century either. 5/10

Veggie option - 2 fried eggs, 2 hash browns, roasted vegetables, roasted cherry tomatoes, sauteed mushrooms and beans for £5.00
Overall - An uninspiring breakfast offering confusingly mixing the word "sizzler" with the reality of food that isn't really very hot. Ok, so on this occasion it was free but had I paid for it I would have been having regrets at choosing Chiquito for breakfast. The more restaurant chains I eat at I see a clear pattern emerging, food that lacks quality and is generally presented in a way that doesn't impress. It seems that independent cafes are where the real quality breakfasts can be found because the owners generally care about being the best and serving the best, my recommended list reflects this. Anyway, as far as Chiquito goes it was ok but is far from special and won't be somewhere I will ever feel the need to return to. 5.10
Posted by Fry Up Inspector at 18:56