A 12 day road trip to the West Country had been planned, we were visiting 2 music festivals and it seemed pointless returning home when they were both so close together. We decided to start in Winchester at Boomtown Fair and end a week later near Exeter at Beautiful Days Festival, the days inbetween would be spent visiting Salisbury, Stonehenge, Bath, Bristol, Weston Super Mare, Bridgwater and Glastonbury. I was planning on inspecting plenty of fry ups along the way at B&B's, Cafe's and at the festivals. I will start by taking a look at the different options available at both of the festivals.. 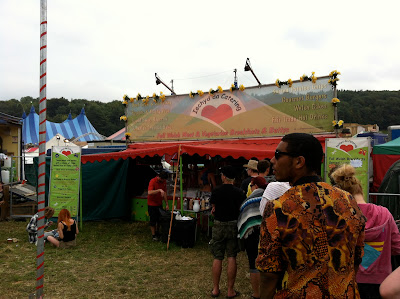 I chose Iechyd da catering as I had never tried a Welsh breakfast before. 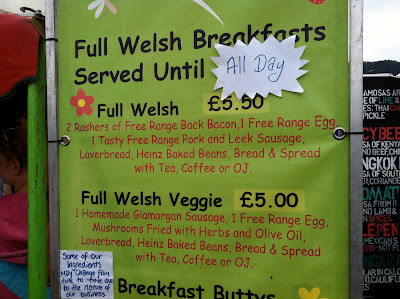 Breakfast was available all day and seemed like a pretty fair price considering it came with bread and butter and a hot drink or orange juice too. I was looking forward to trying the laverbread (seaweed) as I had not tried it before and if it was a traditional part of the Welsh breakfast then I was up for it! 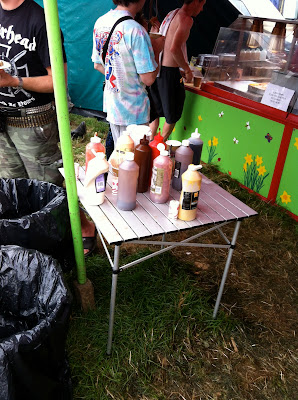 There was an excellent sauce selection available. 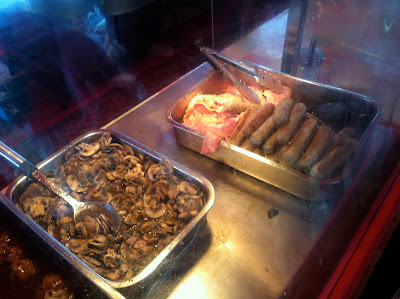 Mushrooms didn't come with the full Welsh breakfast so I paid 50p extra for some. 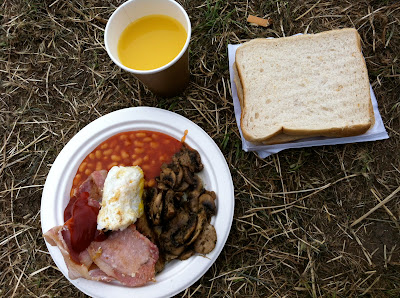 There was a fair amount of food and at least half a pint of orange juice but isn't something missing?? 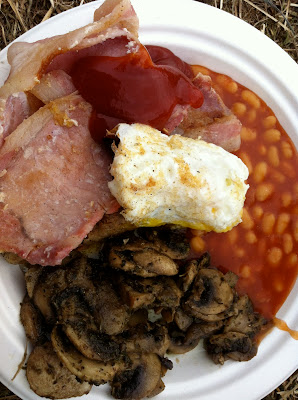 Upon entering - Large signs made it clear what was available and the breakfast was being served all day. There was a table with a vast selection of sauces on and bins to put your rubbish in at the end. There seemed to be an orderly queue heading towards the counter and I was fully aware I would be sitting on the grass to eat it as this is after all a festival! 5/10

Service - The chap serving me was really friendly asking me about the t-shirt I was wearing and happy to add a decent serving of mushrooms for just an extra 50p. He got everything on the plate in good time ensuring it was still hot when I sat down to eat it and ensured we had cutlery, bread & butter and our drinks. 7/10

Presentation - Not great but at least everything was placed onto the plate in separate piles. The egg was not looking too good though looking like it had jumped on the plate and landed upside down possibly to hide the fact it lacked an impressive yolk. The sausage must have been feeling a tad shy hiding under the pile of bacon, or was it just hiding from the fact it seemed to be a veggie sausage? The laverbread must have been feeling incredibly shy as it didn't make an appearance at all! 5/10

The food - The sausage was supposed to be free range pork and leek, Hmm.. I have eaten a few veggie sausages in my time and this is what it was, probably put onto the plate in error but a veggie sausage all the same. To be fair though it was quite chunky and tasted rather nice with a quite herby flavour. The slices of bacon were huge and tasted great but would have been nicer slightly more browned. The huge portion of herby mushrooms were great and despite the seasoning not too overpowering. The fried egg tasted ok but the yolk had burst and was not at all runny in the slightest. The beans were nice enough and the bread and spread was nice and fresh. 5/10

Value for money - With the extra mushrooms I paid £6 for the full Welsh breakfast which included bread and a drink. This was a fairly good price as festival food is notoriously expensive, it was quite enjoyable and left me feeling full up. Why advertise laverbread and not serve it though?? 6/10

Overall - So I chose Iechyd da catering as I had never tried a Welsh breakfast before and left having never tried a Welsh breakfast before as the promised laverbread didn't materialise, despite there being tins of it on the counter. This aside the breakfast was quite enjoyable, fairly well presented and very filling. As festival breakfasts go this is the best I had tried so far, though I knew I would be trying another one in a weeks time at Beautiful Days festival and wondered "could it be even nicer" 5.5 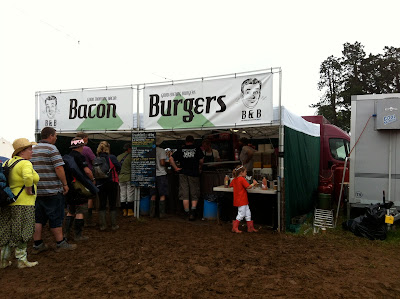 Whenever entering the festival I passed Bacon and burgers. 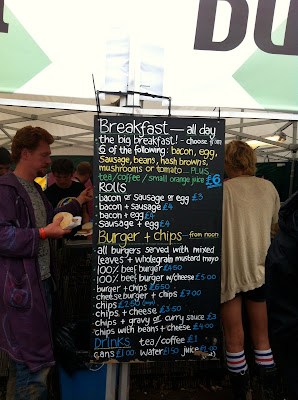 Then I spotted the breakfast menu and knew I was going to have to try the big breakfast. 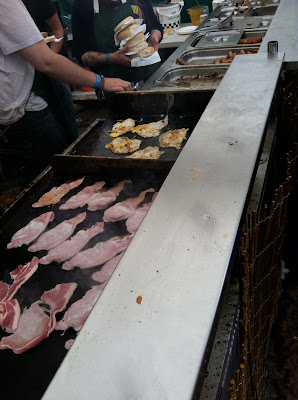 Everything looked a bit of a shambles upon closer inspection and the eggs looked awful! 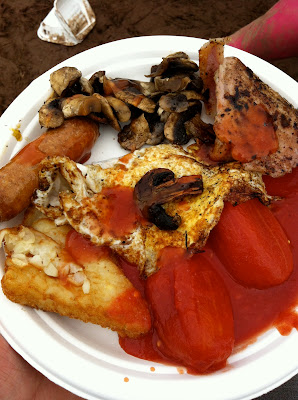 Presentation was not their strong point! 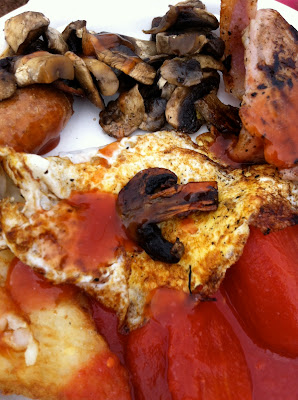 I hadn't seen a ridiculous fried egg situation this bad in a while. 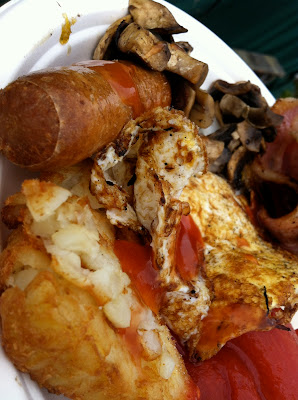 The cheapest sausage in the world, ever! 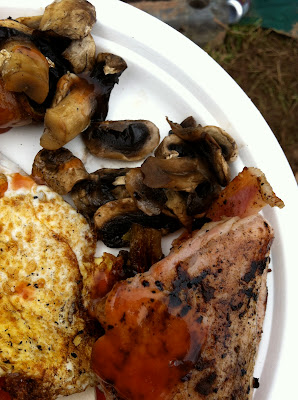 The mushrooms were kind of ok but cold and the bacon was undercooked, the black marks were from the filthy griddle.

Upon entering - The blackboard clearly stated the frustrating "chose 6 out of the 7 items breakfast deal" so all there was left to do was ponder over which item you would not be having. Due to the thick mud at Beautiful Days sitting on the ground was not an option, thankfully there was some rickety benches close by but the way these were placed meant a stranger sitting opposite you would be watching you eat. There was a selection of sauces on a table but the bottles were almost empty and very sticky to pick up. 3/10

Service - The people working here had clearly had a great time the night before but this morning seemed knackered and hungover. I decided I wanted all 7 items and was told for an extra £1 this was possible, then I was told there were no longer any beans so the decision on which 6 items to choose had been made for me. The awful looking items were literally thrown onto the plate by the chap serving me without a care in the world. The bacon was not ready so the plate sat on the counter as I watched everything go cold. I overheard the guy on the griddle say the bacon was not ready yet but another chap put some on my plate anyway. The whole thing was a shambles and nobody seemed at all bothered in the slightest. 2/10

Presentation - Where do I start?? If somebody had thrown up on a plate it would have looked better. The hideously ugly and massacred fried egg took centre stage perched on top of the tomatoes that amazingly were still intact. A lone mushroom sat on top of that evil egg, the others sat to the side trying not to look on at the horror unfolding. The undercooked slice of bacon had morphed into a pigs ear shape and sat shamefully in a sea of cold tomato juice. To the west of the plate lived the soggy broken hash brown and this years entry for the worlds cheapest sausage with its foreskin starting to peel back. The worst presentation I have ever seen! 1/10

The food - The sausage was cheap, luke warm and like eating a washing up sponge injected with princes chicken paste. The bacon was also lukewarm, covered in black stuff from the griddle and quite chewy. The fried egg was so bad that I would have been less offended if the person serving me had slapped me round the face. The yolk had blended into the white, it was like chewing egg flavoured gum, was stone cold and covered in black stuff from the griddle too. The hash brown was barely warm and lacked any crispiness. The mushrooms and tomatoes were not very hot so didn't taste too good. 2/10

Value for money - I paid £6 for something that looked and tasted awful, a complete waste of money. 2/10

Veggie option - You could choose 6 items but there are no veggie alternatives to the meat items.

Overall - All the equipment and ingredients were in place to cook up a half decent fry up but nobody seemed the slightest bit bothered about quality or presentation. I ate some amazing food from other catering stalls at both festivals so why this place was so bad I have no idea but despite this it remained busy all weekend. Bacon and burgers hang your head in shame and have some pride in what you serve as it is your customers that keep you in business. One of the worst breakfasts I have ever seen, truly shameful.. 2.5


The winner is Iechyd da catering


You may well be better off making your own in your campervan. 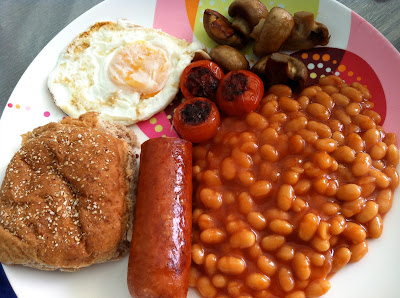 Even with no fridge you can always resort to using a Matterson's sausage. 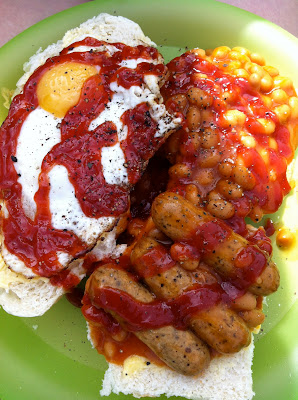 A friend of mine likes his breakfast wet so went for plenty of ketchup. 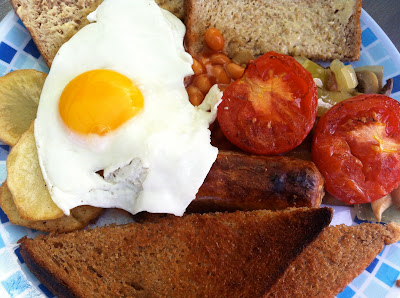 Another friend of mine  decided to cook me breakfast one morning. He even fried some bread and potatoes, the fried onions and mushrooms along with every thing else were delicious! 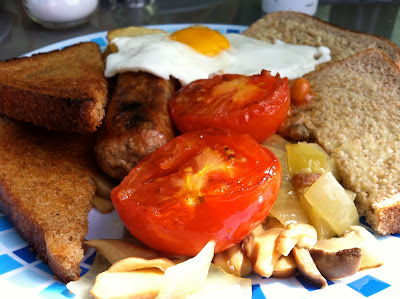 Created in the confined space of a campervan using a small gas cooker this was my favourite festival breakfast, nice work Dom!