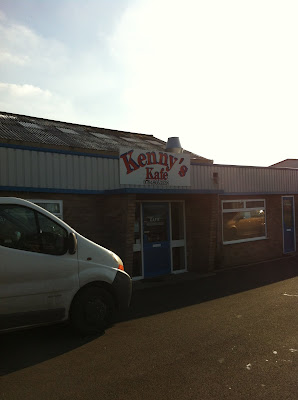 Kenny's Cafe can be found on Concorde Road. 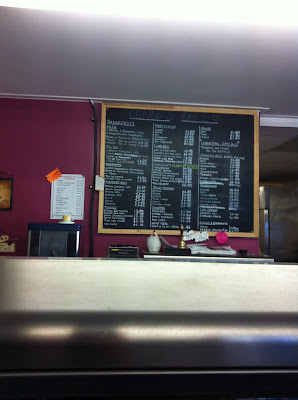 A large menu above the counter tells you what is on offer. 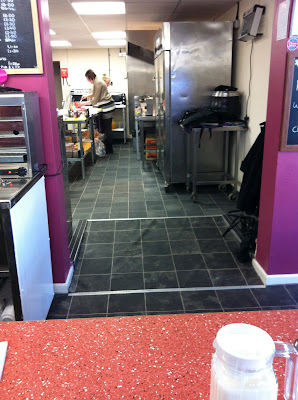 This is the kitchen behind the counter area. 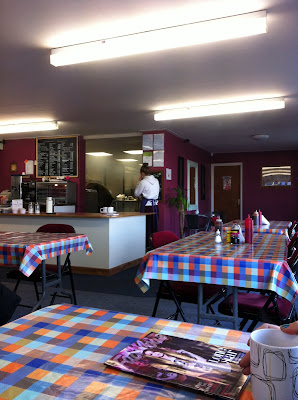 This is the seating area, in the background a small fire had just been put out in the kitchen! 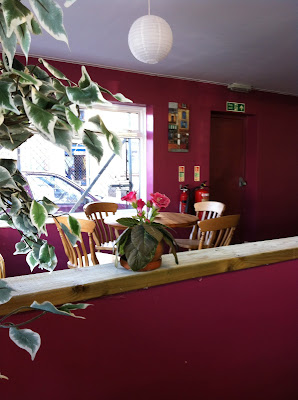 Towards the rear of the cafe is a slightly different themed seating area. 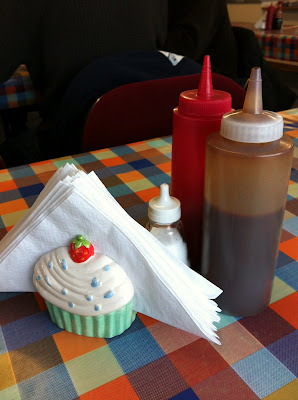 The cupcake serviette holder was a nice touch, things were looking promising! 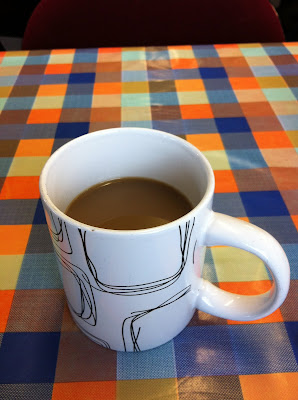 The coffee was included in the price of the mega breakfast and was ok. 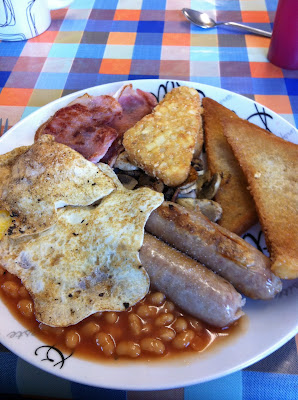 Oh dear, things were suddenly not looking so good. The eggs were dire and everything was luke warm. 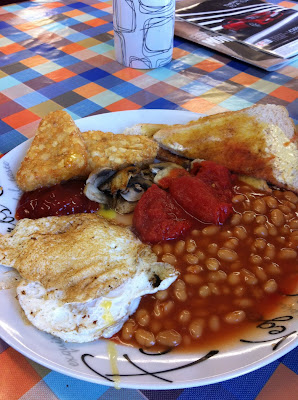 My girlfriend was equally gobsmacked when hers arrived, she sent hers back telling them it wasn't hot so it got blasted in the microwave. 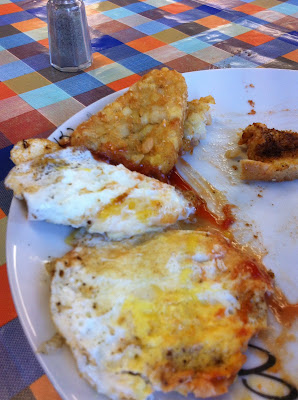 When the breakfast returned from the microwave the eggs were like rubber.

I was left a message on my Fry up inspector facebook page from Kenny's Cafe saying "I should come along as they do a mega breakfast and all day breakfast, and both were very popular." Great I thought, the food must be pretty good and they must be proud of what they are serving to recommend it to me. My girlfriend decided to come along too and try a veggie fry up which was fantastic as I was keen to cover veggie breakfasts a bit more than I had been...

Upon entering - Having found ourselves in the middle of an industrial estate it was a nice surprise when we walked in to find how spacious and nicely decorated the cafe was. There were a good amount of large tables and a separate seating area towards the rear themed slightly differently to the rest. There was a tv and newspapers available to read but it was a bit chilly inside. Behind the counter was a large blackboard displaying everything on offer, cutlery could be found on the counter too. Condiments were on each table and delightful ceramic cupcakes stored folded serviettes. 8/10

Service - It started off well with our order being taken, and various breakfast options being offered, we were told there might be a bit of a long wait on the food but we were in no hurry so not a problem. We took our drinks and found a table, just after that we heard a loud shout of "fire!" and noticed the kitchen was full of smoke, luckily it was put out promptly and normal service was resumed, the smell of burnt plastic was lingering a bit until somebody opened the windows making the already chilly cafe even colder. Just before the food arrived I was offered a newspaper to read, things were looking up! Then the food arrived looking a bit worse for wear and barely warm. I always write about my experience as I find it but my girlfriend wasn't prepared to eat the food luke warm so returned it. A few minutes later it arrived having been blasted in the microwave, this had turned the already sorry looking eggs to a rubber like texture. She mentioned this but the response was "pass, I wasn't in the kitchen" We shortly after that heard this being passed onto the person who had cooked the eggs but there was no mention of it afterwards. 5/10

Presentation - What can I say.. Those speckly fried eggs were not looking good at all, my first thought was that they had been served upside down but no, the other side was the same. By far the most appalling eggs I have ever been served. The layout of everything else looked ok but the sausages looked like they needed a bit longer in the pan. 4/10

The food - Unfortunately everything arrived lukewarm but here is the rundown.. The sausages although a bit undercooked were ok with an almost hotdog taste to them. The bacon was pretty nice and the fried bread was amazing, not many places get fried bread right but this place had nailed it, crisp and golden but not dripping in oil. The hash browns were not very crispy, the mushrooms were ok as were the beans. The fried eggs as I mentioned earlier were shockingly bad, popped yolks and not very pleasing to the eye at all. 4/10

Value for money - The mega breakfast included a drink cost £5.25 and the veggie breakfast with a drink cost £4.25. Both great prices if you enjoy what you had eaten, we didn't leave too impressed though so.. 5/10

Veggie option - Yes, but no veggie alternative. The same as the mega breakfast without the meat for £4.25, tomatoes can be added as an extra.

Overall - I usually find with most breakfasts that if the fried eggs are good then the rest of it tends to end up being good too, these were sadly the worst fried eggs I have been served since starting this blog. On a positive note the fried bread was amazing and the cafe was nice inside. I went along expecting great things but did leave feeling disappointed. On my search for the perfect fry up experience I have visited many places and eaten some great food. Awful fried eggs and warm food is not really what I was hoping for though. 5/10

Sergeant sausage went to investigate Kenny's Cafe for me as i had been told things had improved. It seems the breakfast is much better now, read the Sergeant Sausage report here