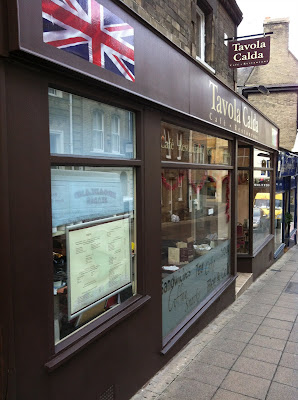 Tavola Calda can be found in Norwich city centre on Opie Street. 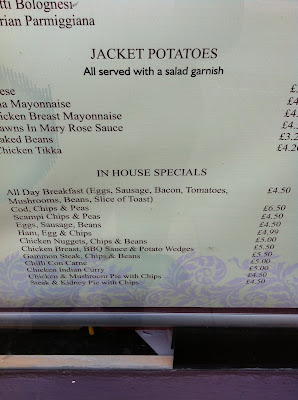 The all day breakfast was a bit different when it arrived to how it was described on the menu, what I actually got for £4.50 was - 1 egg, sausage, bacon, tomato, mushrooms, beans, fried bread and a coffee. 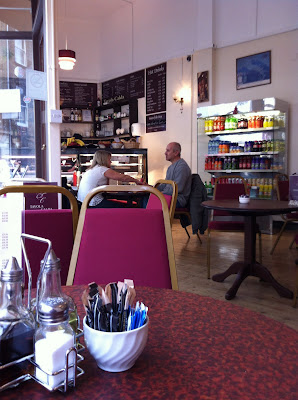 Take a seat and the waitress will take your order. No sauces were on the tables but sachets were available. 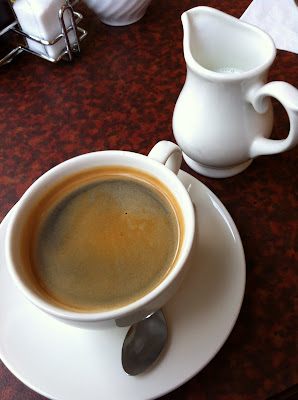 The coffee was delicious and either comes with the all day breakfast or they forgot to charge me for it. 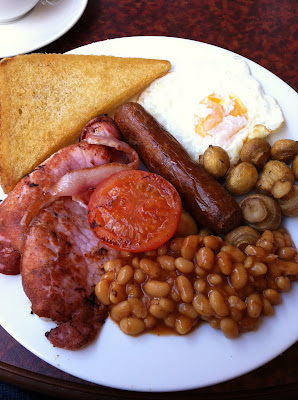 It looked ok but the economy sausage and oil drenched fried bread was a bit of a disappointment.

Christmas was a few days away so a trip into Norwich City centre for a last bit of Christmas shopping was needed. I wasn't particularly looking forward to this last shopping trip but the day before a friend at work had told me about a new cafe that had opened in the city on Opie Street. I decided to find this new cafe before braving the shops...

Upon entering - Inside it is fairly small with a number of tables to choose from, some by the window and a counter at one end. There is a large menu on the window outside and smaller ones on each table along with some condiments, sauces can be found on a separate table in sachets. 6/10

Contents - 1 sausage, 2 bacon, 1 fried egg, half a slice of fried bread, half a grilled tomato, mushrooms and beans. 7/10

Presentation - Everything looked ok and nicely cooked when it arrived but the economy sausage was instantly evident and it was jumbo! 7/10

The food - Regular readers of my blog will know my feelings on economy sausages and this one was jumbo and lacking quality big time, as I cut into it you could almost here the air as it seeped out of the sausage leaving a sorry looking sunken line of despair centre stage on the plate. Fortunately the bacon was nice enough and the fried egg and mushrooms were good. The fried bread looked good but was seriously holding a lot of oil which may well have shortened my life by a few months. The beans were nice and the tomato was average. 5/10

Overall - Tavola Calda has only recently opened so they are probably still finding their feet. The place is nice and the staff are friendly, it does have a lot going for it really with it's central location in the city. I however am on the search for the perfect fry up experience and sadly it could not be found here. The menu may frustrate some people as what arrives is different to what the menu states, eggs means more than one and toast does not mean fried bread. I love fried bread (not when it is soaked in oil though) but I know plenty of people who are not so keen and may well be disappointed when it arrives expecting toast. I say hike the price of the all day breakfast up to £5.50 and serve it with a good quality sausage or two and fry the bread when the oil is hot enough and they could be onto a winner. 6/10