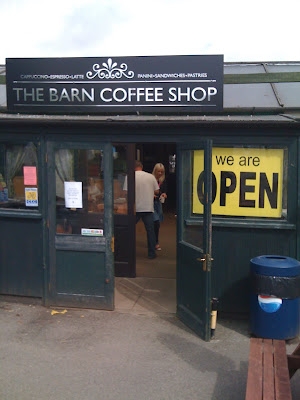 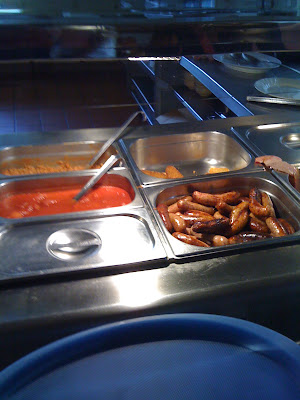 The selection is not great but £3.90 for 10 items seemed a fair price. 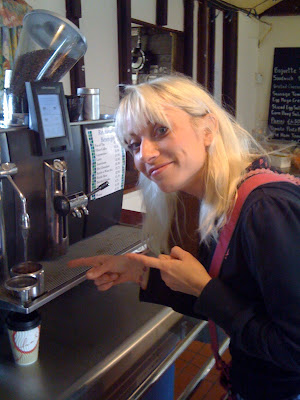 Ella making a pot of much needed tea after a good 10 minute wait at the counter. 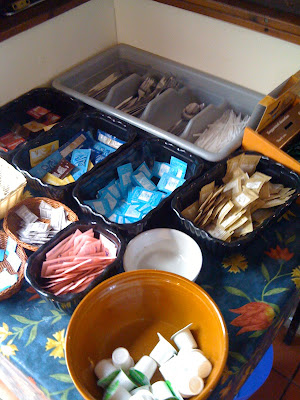 Lots of sugar and filthy cutlery but no ketchup. 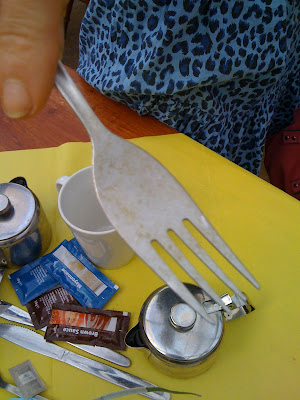 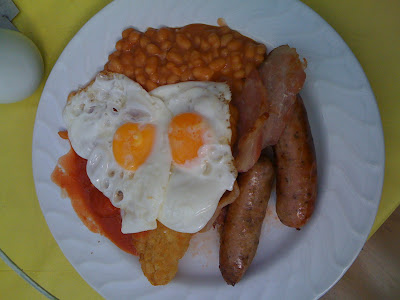 
Alive & V Dubbin 2010 was being held at Stonham Barns near Stowmarket so we decided to go along and see what was going on. A bloody great weekend and much bigger than we thought it would be. There were a number of businesses on site but the one that caught my eye was the coffee shop with its breakfast sign. After a late night of beer & cider me & Ella went with our hangovers in search of the coffee shop..

Upon entering - There was a large seated area in a conservatory and picnic tables outside. The blackboard was advertising a 10 item breakfast for £3.90. 8/10

Service - We waited bloody ages for the young chap behind the counter to sort out the fried eggs for the people in front. When it was finally our turn the guy very slowly went off to cook more eggs. Why he didn't just cook a load at once was beyond me, there was enough people queuing that would be wanting them. I could feel myself losing the will to live as I waited. The food was eventually bought over to us at the point I was photographing the rank dirty bean juice covered fork that we had taken from the cutlery tray. He did apologize but dirty cutlery is a sign the people working there really don't give a shit. 3/10

Contents - 2 sausages, 2 bacon, 2 fried eggs, 2 hash browns, beans & tinned tomatoes. There was no other choices apart from toast but I couldn't be arsed to wait even longer for that to cook. 5/10

Presentation - The young chap serving clearly didn't have any passion for food, I could have platted it up better with my eyes shut! 4/10

The food - Nice herby sausages, overcooked but ok bacon, slightly odd looking but ok fried eggs, overcooked & chewy hash browns, slushy tinned tomatoes. The beans for me were spot on though! I love it when beans have been sat there for ages and have gone a bit slushy. 6/10

Value for money - A fair price but limited choice. 6/10

Overall - Close the place down, give the place a good clean, employ staff that know what their doing, re-open and they could be on to a winner. The whole breakfast idea is great but poorly executed. 5/10

A year on from my last visit I couldn't resist popping in to see if things had improved at The Barn. The service seemed a little bit more together and the cutlery seemed a lot cleaner too. The nice sausages from last time had been replaced with economy ones that were not particularly nice, everything else on the plate seemed about the same as last time except for the egg which was really nice. Again, everything was served and the plate sat on the counter for a good 5 minutes whilst the egg cooked. The price for the 10 item breakfast had increased from £3.90 to £5.25 in the space of a year. 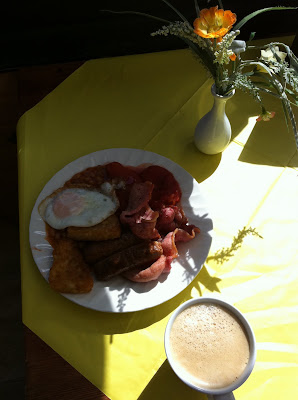 The coffee was really good but had the breakfast improved?? 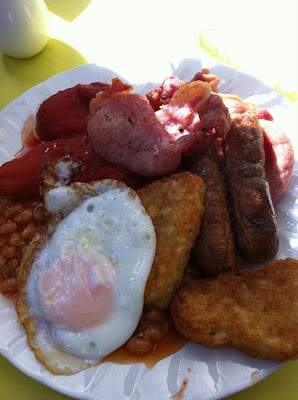 The fried egg was much better this time round but the hash browns had sat for too long and became a bit chewy and swapping the nice pork sausages to the economy sausages was not a good move.
Posted by Fry Up Inspector at 21:04