Breakfast served all day
9.00am till 3.30pm
Closed Mondays 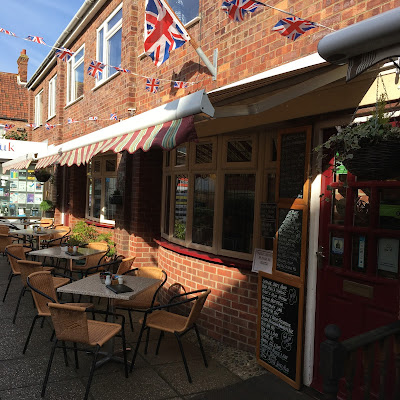 A spontaneous day out in Sheringham started with breakfast at The Mulberry. 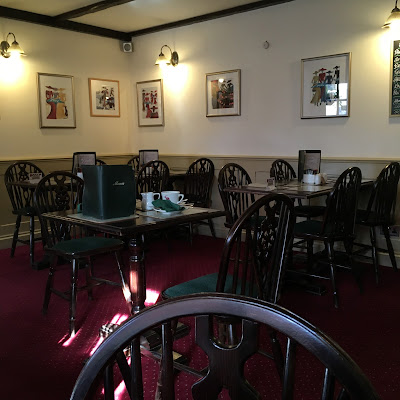 Inside it was traditional and warm, a nice relief from the freezing cold temperatures outside. 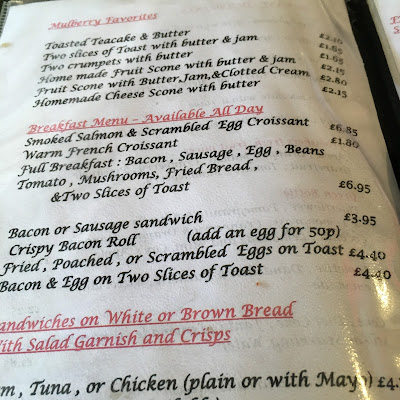 Choosing which breakfast to have here was quite easy. 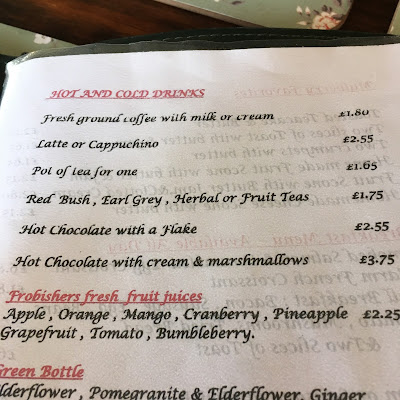 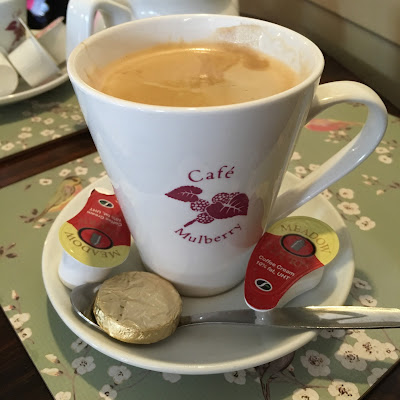 I'll always welcome a chocolate with my coffee. 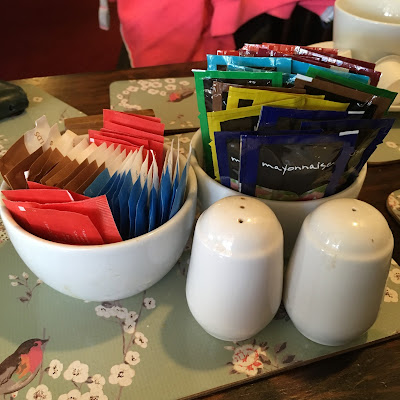 I'm not a huge fan of sachets but there was certainly a good choice here. 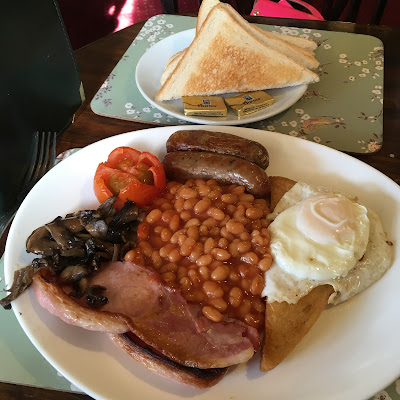 The Full breakfast cost £6.95 and the beans were touching everything. 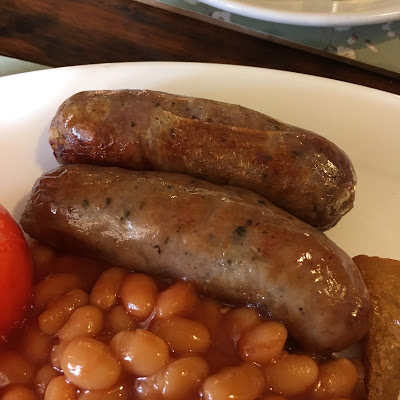 The sausages were ok. 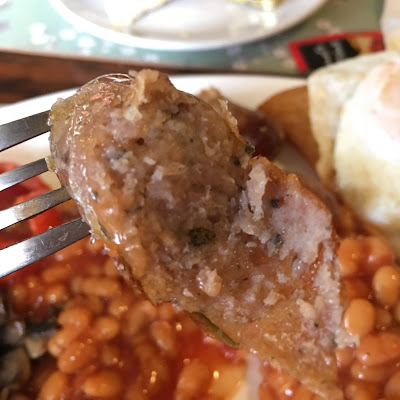 A Lincolnshire sausage I believe. 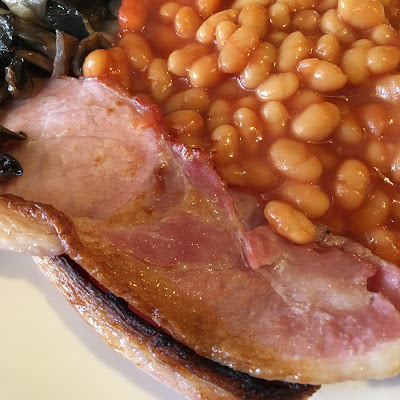 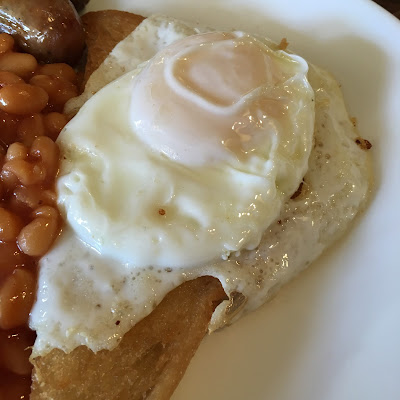 The fried egg lay perfectly positioned across a slice of fried bread. 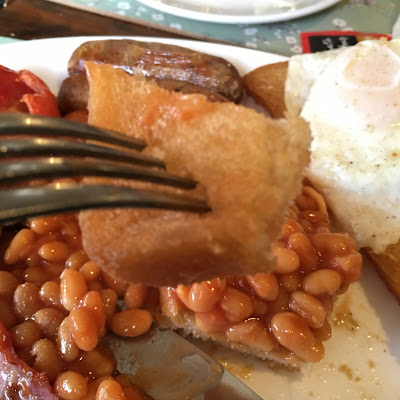 Great fried bread it was too, golden and crispy just how I like it. 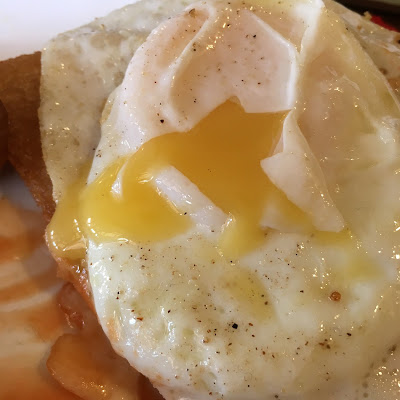 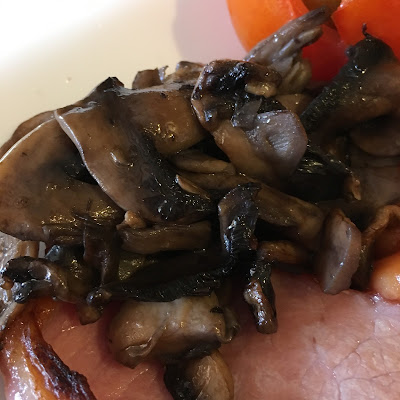 The mushrooms were dark and quite slimy, they tasted ok though. 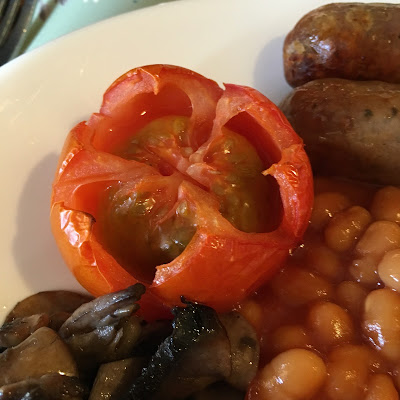 I've not seen a tomato presented like this since the 1970's. 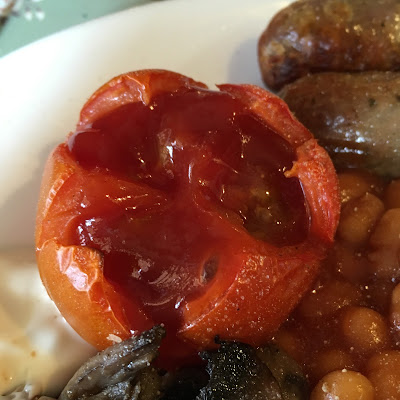 I filled it with ketchup as tasteless tomato panic set in. There was really no need though as it was quite a flavoursome tomato. 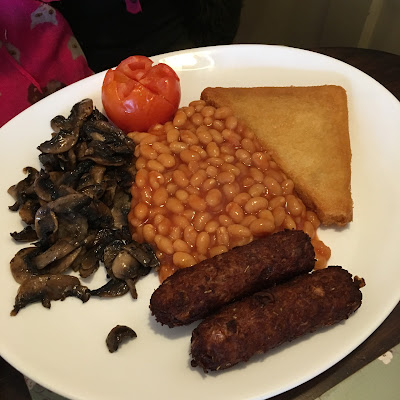 My wife's vegan breakfast included toast and cost about £6.

It was a cold Saturday morning and my wife and I had nothing planned for the day. Around 8.30am my wife suddenly suggested catching a train to the coast. The sun was shining and we'd been given a weekend warrior fitbit challenge so I was game, a great opportunity to get some steps in and an even better opportunity to review another breakfast. A quick look on trainline and we'd decided to catch the 9.45am train from Norwich to Sheringham. The Mulberry Tearoom seemed to offer vegan options for my wife and was close to the train station in Sheringham so that would be our first port of call...

Upon entering - Tucked away in a small alley off Station Road we spotted The Mulberry. The interior is fairly spacious with plenty of tables to choose from, there's also some tables outside in the alley. It was nice and warm inside which was sheer bliss as outside there was a harsh icy wind. We chose a table beside the window which was set for four people, it was quite a narrow table compared to the ones in the centre but was just big enough for the two of us when the breakfast later arrived. There's a menu on the table and additional options including a vegetarian menu and specials displayed on the wall. Sauces are in sachets and already on the table along with salt, pepper and sugar. It's full table service here so your order is taken at the table and you settle your bill at the end. Quite a pleasant place to enjoy a spot of breakfast and certainly warm and cosy which was much needed on a bitterly cold day. 7/10

Service - Attentive and efficient springs to mind when summing up the service we encountered here. Front of house staff were on standby the moment we walked in and somebody was over with pencil and pad ready to take our order before I'd even had time to find the breakfast section inside the menu. Initially I felt slightly rushed but the chap taking our order was so friendly and helpful the over enthusiasm was soon forgiven. My wife asked about a vegan breakfast and was told about the vegetarian breakfast which could be served without an egg. With our order placed the hot drinks arrived first, my coffee included a small chocolate which was a nice little touch. The food all arrived in good time and we settled our bill on the way out. 7/10

Presentation - The beans were literally touching everything else on the plate which isn't an issue for me but it could well be for others based on the feedback I read on my facebook page. All the other items surrounded the bean lake in the centre of the plate, the fried egg lay across a fried bread raft dipping it's white into the beans below. The tomato looked like it was going to a 1970's fancy dress party sporting it's tomato flower look.  The toast was evenly browned and served on a side plate with the butter underneath to allow it to soften slightly. To be honest the breakfast didn't visually excite me very much but the presentation was fairly tidy. 7/10

The food - I'm pretty sure the sausages served on this breakfast were a Linconshire variety, they really reminded me of the sausages served in Wetherspoons. So not great sausages but reasonably nice and adequate enough on this breakfast. I was more impressed with the bacon though, the rind was browned and and it tasted great. I covered both rashers in ketchup and enjoyed them between some hot buttered toast. The highlight for me was the fried bread, golden and crispy throughout resulting in the perfect crunch but not saturated with oil. This was the best fried bread I've eaten in a long time and my wife didn't want hers so I wasted no time in adding a second slice to my plate. I covered one slice in beans and the other was already topped with a fried egg. The well basted egg contained a nice runny yolk that sunk into the fried bread when I cut into it, this combination was the most tastiest moment of the breakfast for sure, loved it! I had very little faith in a winter tomato having much flavour so I drowned it in ketchup. I really shouldn't have been so hasty though as underneath the ketchup lay a flavoursome roasted tomato. The mushrooms I gazed at wondering if they were the dreaded tinned variety as they looked dark and slightly slimy. Having tasted one though I felt sure they were fresh ones that had been steamed perhaps. All in all a pretty average breakfast really but that fried bread was superb! 7/10

Overall - A nice little tearooms with friendly and efficient staff serving a nice enough breakfast. Fans of black pudding may despair as it's not available here and neither are hash browns. It does offer a vegetarian option and has an impressive vegetarian menu too but the vegan option was fairly basic. If you love fried bread though then you may well want to check this place out as it was pretty impressive! 7/10