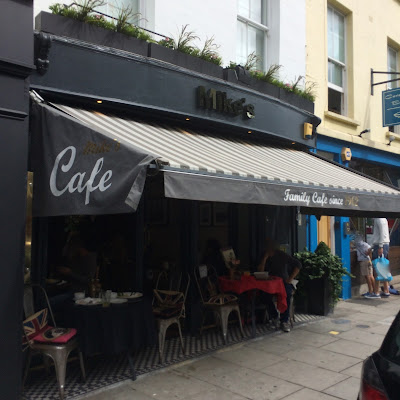 Mike's Cafe can be found on Blenheim Cresent just off Portobello Road. 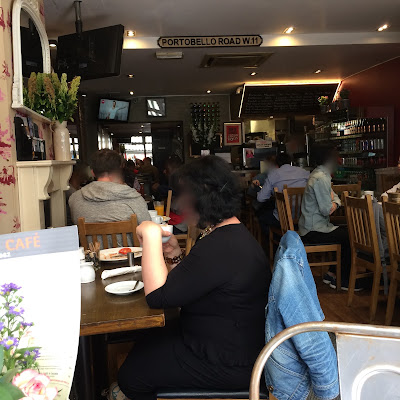 It's certainly a popular place, it was completely full when we arrived. 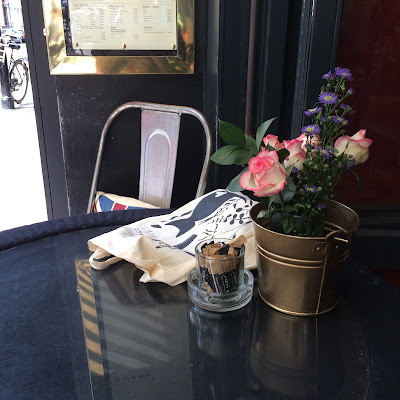 There was an empty table outside though and as the sun was shining it seemed like an excellent place to sit and eat some breakfast. 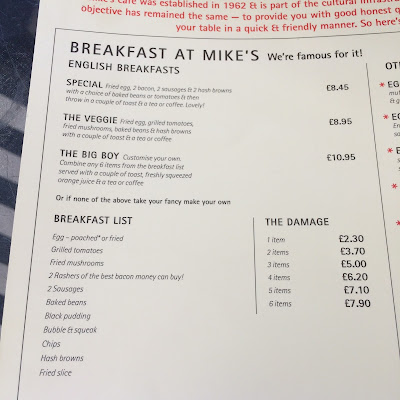 The breakfast menu features set breakfasts or the option to build your own. I decided to order the big boy, at £10.95 it also included orange juice and a hot drink. 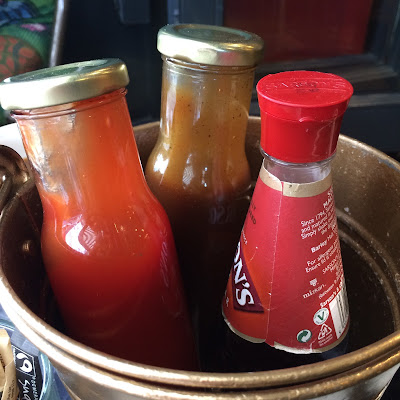 Sauces arrive in a bucket. 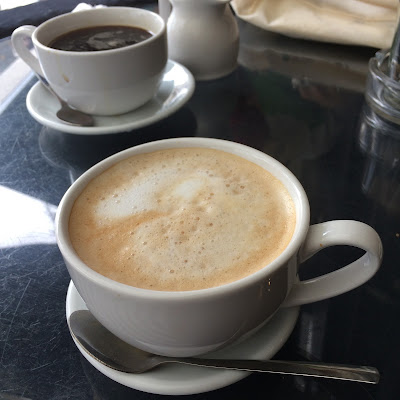 The coffee here was really nice, it comes with the set breakfasts and you have the choice of an americano or a latte. 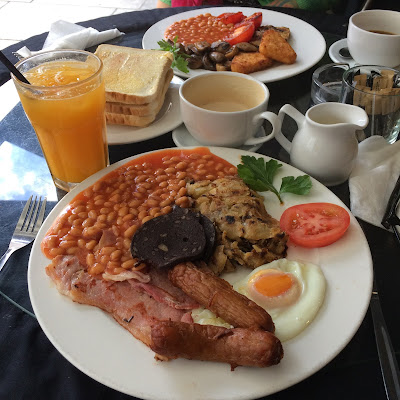 There's no shortage of beans! 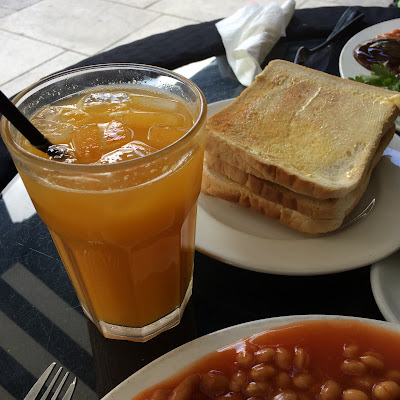 The orange juice is freshly squeezed and the toast comes with spread instead of butter. 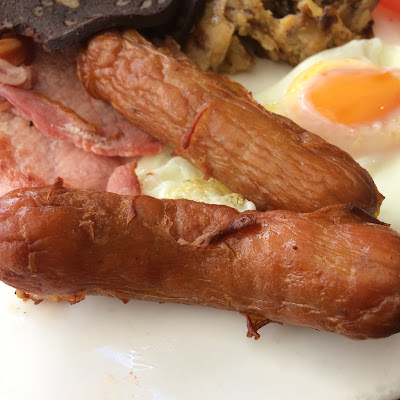 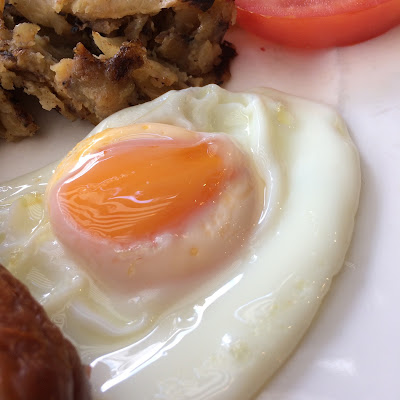 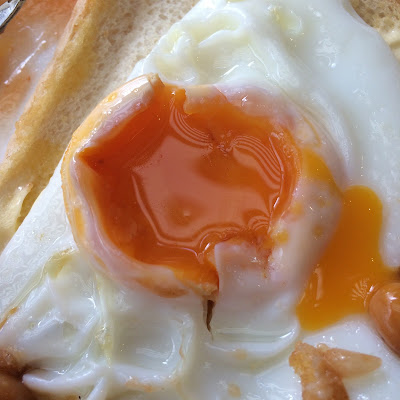 Just look at that yolk. 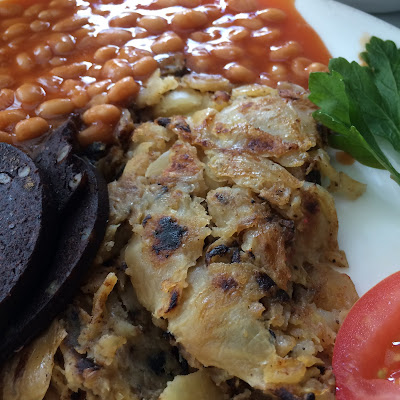 The best part was definitely the bubble and squeak and there was plenty of it. 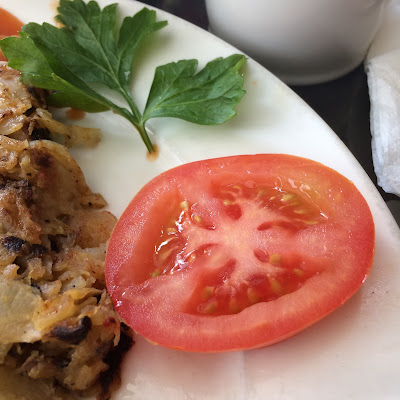 I didn't order tomatoes but a fresh slice was served as garnish alongside a sprig of parsley. 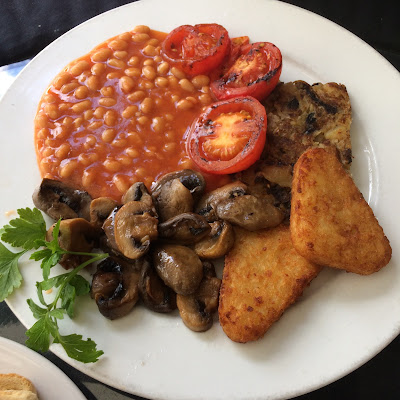 My wife ordered the veggie breakfast and swapped the eggs for bubble and squeak. 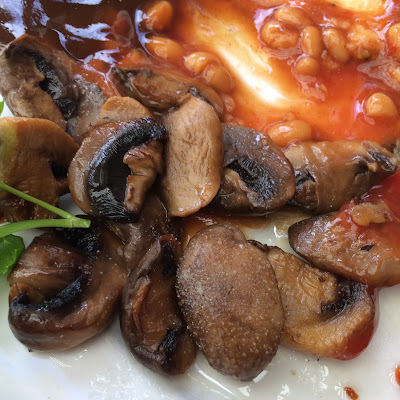 The mushrooms were excellent. 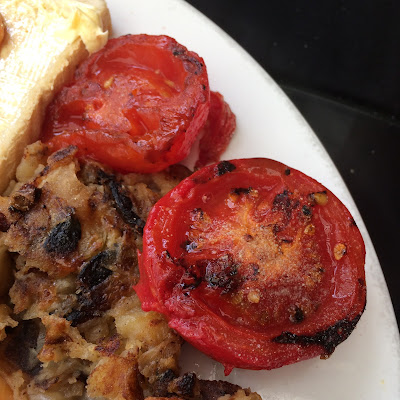 And so were the tomatoes, a deep shade of red and really flavoursome.

We arrived in London on the coach from Norwich just before 9am so decided to start our day with breakfast. By the time we'd reached Mike's Cafe at around 10.30am it was full to capacity, luckily there was an empty table outside though so we grabbed it...

Upon entering - I only briefly saw the interior of the cafe due to sitting outside, it looked beautifully decorated with a large counter on the far wall. A menu could be found on each table and there's full table service so just sit back and wait for somebody to come over and take your order. Sauces and cutlery arrive with the food and you can wait for the bill to be brought over or settle it at the counter before leaving. 7/10

Service - The lady serving us was friendly and happy to be flexible with my wife's veggie breakfast, swapping the egg for bubble and squeak wasn't a problem at all. Everything we ordered arrived in good time considering it was so busy and we settled the bill on the way out. 7/10

Contents - You can build your own breakfast here from the following items: Poached or fried eggs, sausages, bacon, black pudding, mushrooms, tomatoes, bubble and squeak, hash browns, beans, chips and fried slice. The more items you order the cheaper each item becomes. I ordered the Big Boy breakfast which I'll base the score for this section on, it consisted of: 2 sausages, 2 bacon, black pudding, 1 fried egg, bubble and squeak, beans, 2 slices of toast, orange juice and a coffee. 7/10

Presentation - The breakfast was served on a large white plate with a sea of beans covering one side of it. The bubble and squeak looked great but it was going to take more than a sprig of parsley and a slice of fresh tomato to distract me from the fact the sausages looked pretty dreadful. 5/10

The food - The sausages looked really wrinkled so I doubt they'd been cooked to order. An economy sausage for sure but the type with a slightly firmer texture so mildly enjoyable at least despite their appearence. The bacon tasted great and the black pudding was sliced incredibly thin, it tasted ok though. The bubble and squeak was tremendous with great flavour and a nice course texture, there was plenty of it too. Something else there was no shortage of was beans, a big lake of them in slightly more sauce than required. A standard  pair of white slices of bread were toasted and covered in spread, a slight shame as I much prefer real butter. The toast did make a nice base for my fried egg though, it was cooked quite nicely with a deep orange and runny yolk. I should also mention the tomatoes and mushrooms on my wife's breakfast as I tried both and they were excellent. 6/10

Value for money - The big boy allows you to choose six items from the breakfast list and also includes toast, orange juice and a hot drink for £10.95. This might seem a tad expensive but remember you're in London where prices are higher and you're getting an excellent coffee and freshly squeezed orange juice as part of the deal. If you choose your items wisely you could do quite well with this deal. 7/10

Overall - A nice little cafe with friendly staff and a good selection of breakfast items on offer. The big boy seemed like a pretty good option to me but as I started working out which six items to choose I realised I'd be missing out on some crucial items. I would have liked tomatoes, mushrooms and a fried slice too but this would have cost an additional £5. I wasn't willing to spend a total of £15.95 so stuck to the six items. My advice would be to forget about ordering sausages and order either mushrooms or tomatoes instead as both were a far better option.  6.5/10