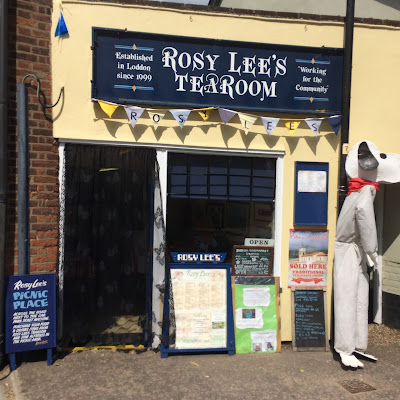 Rosy Lee's Tearoom had been on my list of places to visit for breakfast since starting my blog over seven years ago. Having been voted one of the top tearooms in the country in 2011 by The Times (read the article here) I was keen to experience it for myself. 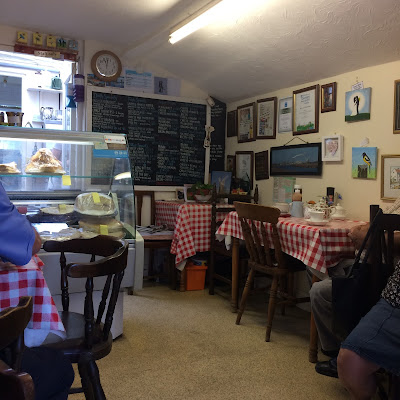 Inside it's compact but has heaps of character, there's also an outside seating area just across the road. 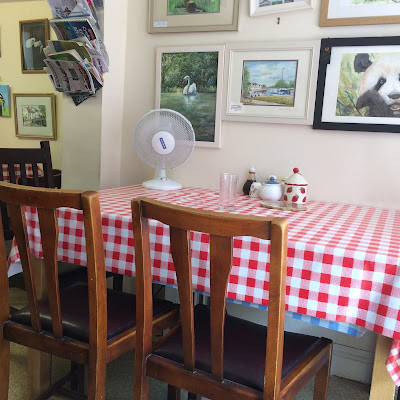 Traditional gingham table cloths cover the tables and local artists work which is available to buy is displayed on the walls. 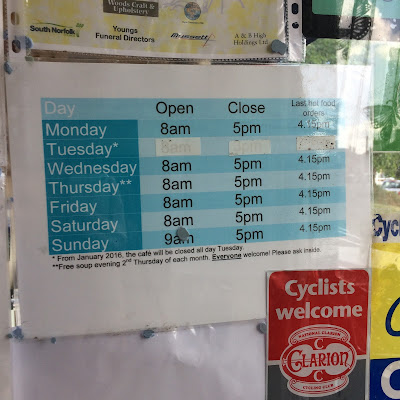 Cyclists welcome is displayed on the door. I know this is a popular stop for cyclists and my wife and I had just cycled 16 miles to get here from Norwich. 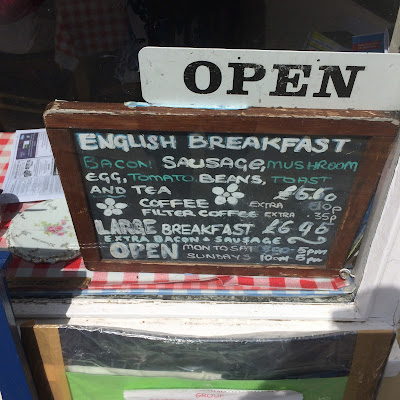 There's a breakfast sign in the window but more breakfast options can be found on the menu inside. 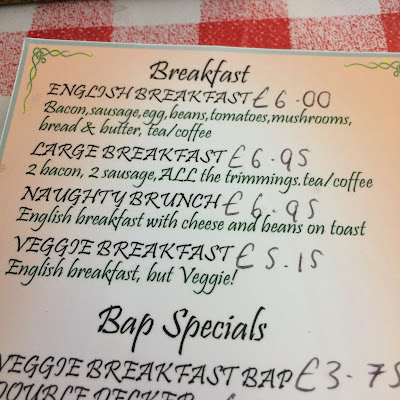 The prices seemed quite reasonable but working out whether the veggie breakfast included a drink confused us a bit. We gave in and asked the waitress but she didn't know either. 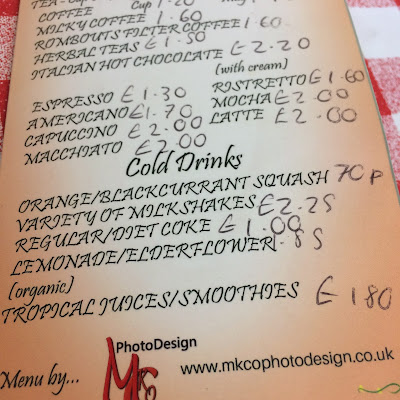 The drinks were reasonably priced here. 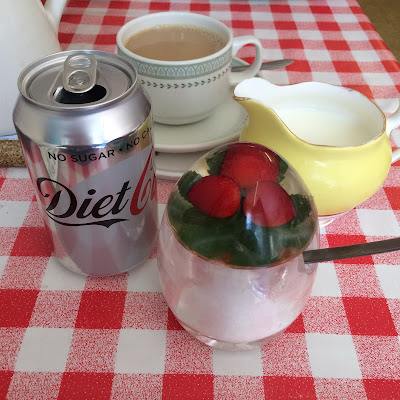 A can of coke cost £1 and a pot of coffee was included with my breakfast. I loved the strawberry sugar pot! 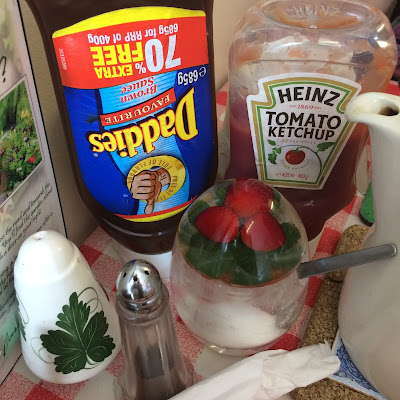 Sauces were offered once the food had arrived. 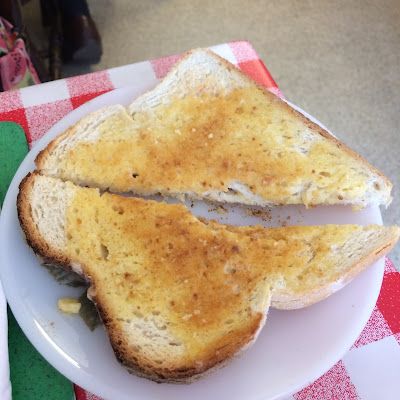 Bread and butter was mentioned on the menu, It arrived toasted though which seemed like a better option. 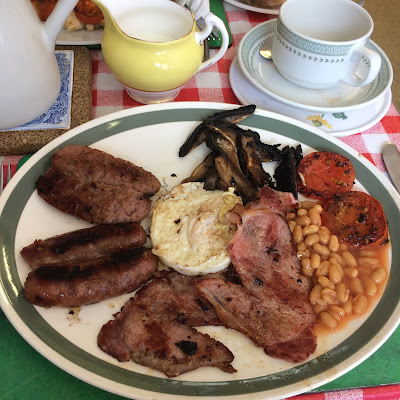 The large breakfast looked disappointing with the sausages split and an untidy egg. 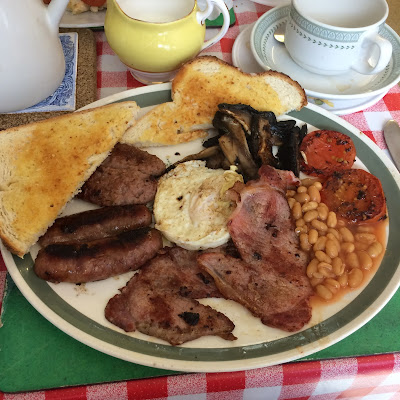 I popped the toast on the plate but still wasn't really feeling it with this breakfast. 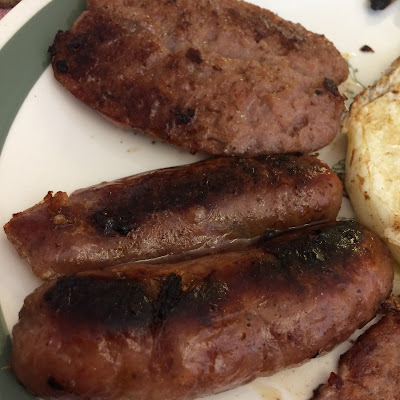 Splitting a decent quality sausage seemed a real shame as it would have been far moister cooked whole. That said though it was piping hot and tasted rather nice. 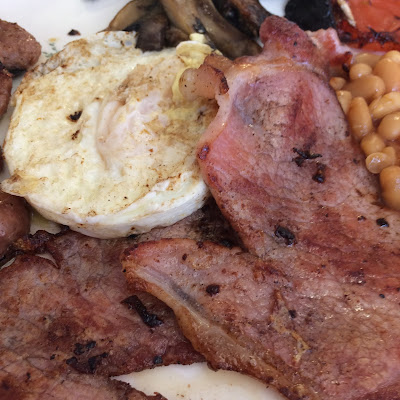 The bacon was served with a few burnt bits from the pan/griddle. 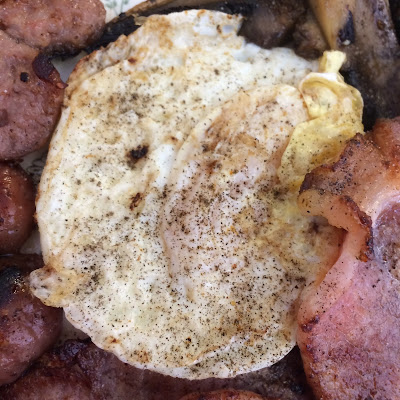 I guess the fact the egg wasn't snotty was a bonus but visually I was quite shocked. 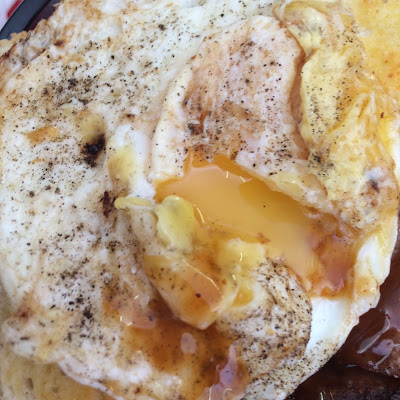 The sight of a runny yolk was something at least. 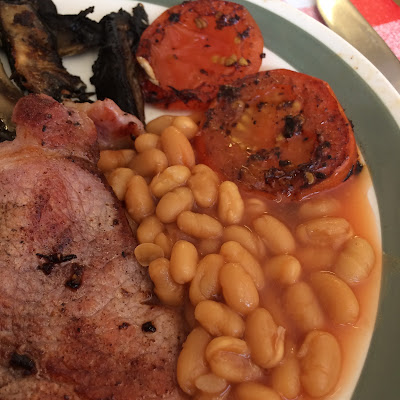 The tomatoes were quite nice and the bean portion minimal. 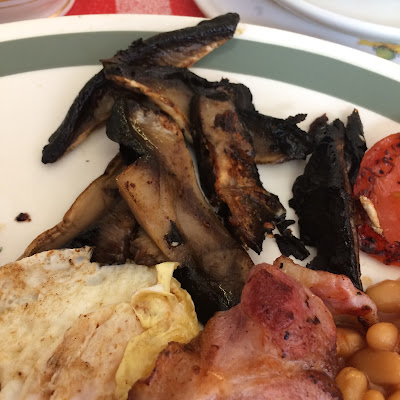 The highlight of the breakfast was without a doubt the thick cut mushrooms, delicious! 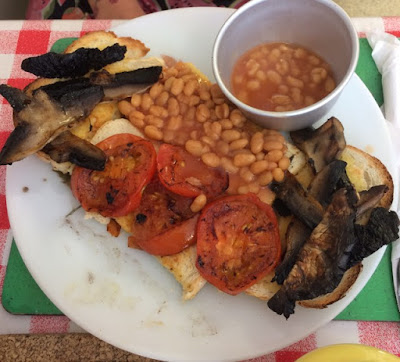 The veggie breakfast was simply the English breakfast without the meats, it usually comes with an egg too but my wife doesn't eat eggs so ordered it without. This was the first breakfast I'd seen with beans on the plate and also served in a ramekin. 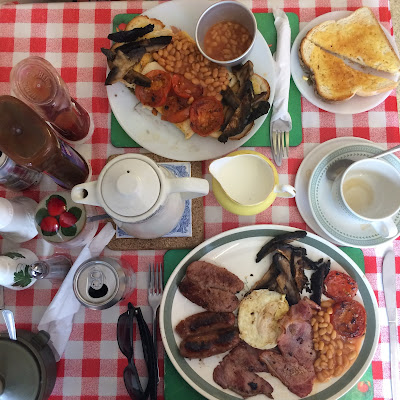 A birdseye view of everything.

Having cycled along Marriots Way to Reepham earlier in the year my wife and I decided to jump on our bikes again and head along cycle route 1 to Loddon. We got up early so as to arrive in Loddon in time for a late breakfast, we'd decided before setting off from Norwich that we'd stop at Rosie Lee's Tearoom. The journey was very pleasant indeed with very little traffic and great views of the countryside. Once in Loddon we locked our bikes up to some cycle rails directly opposite Rosie Lees and headed inside...

Upon entering - Rosie Lee's Tearoom is fairly small but I liked this as it made it feel quite cosy and added to its character. The kitchen is out the back and the counter is along the rear wall, lots of homemade scones and cakes are displayed in the glass cabinet. The table cloths are gingham, crockery is mismatched and local artists work, which is available to buy is displayed on the walls. There's plenty to look at in here and you can't help but feel drawn in by the welcoming atmosphere and unique character of the place. There's also an outside seating area across the road beside the car park, I had a quick look after leaving and thought it looked like a great place to sit in the warmer months. There's full table service here so take a seat and wait for somebody to come and take your order. The menu seemed quite confusing to me, especially the breakfast section. The breakfast menu in the window further confused me with the mention of coffee costing extra with breakfasts, there was no mention of this on the main menu though. Once you've placed your order everything is brought over to the table when it's ready. Sauces are offered once the food arrives and come in squeezy bottles which is always a good thing. At the end we simply settled up at the counter. Certainly a wonderful environment and great place to spend some time relaxing, there's not many places left like this and it does feel really special. 8/10

Service - The welcome customers receive at Rosy Lees is quite incredible and probably the main reason why it's always so busy and is loved so much by the local community. Once inside we chose a table and somebody came over almost straight away to take our order. As there was no menu on the table we couldn't make a decision what to order, we requested a menu though and it was brought straight over. We ordered 2 diet cokes and then realised the English breakfast included a hot drink. We couldn't work out whether the veggie breakfast included a drink too as it didn't state it clearly on the menu. We asked the waitress but she didn't know either so my wife decided that perhaps it didn't. The food arrived in good time and sauces were offered and brought over to the table by a very friendly lady who I assumed was the owner. Before leaving she worked out our bill, chatted for a while  and confirmed that the veggie breakfast did indeed come with a hot drink. We left feeling really welcomed and looked after. The ordering process was slightly confusing but there's no doubt that service this friendly and sincere is a rare treat these days. 9/10

Presentation - When the toast arrived I was feeling quite hopeful but when the breakfast arrived my heart sunk. An unsightly fried egg sat in the centre of the plate with split sausages to the west and bacon down south. Burnt bits from the griddle or pan covered many of the items which is something I never want to see on a breakfast. The beans, tomatoes and mushrooms looked ok but on the whole this breakfast was visually quite depressing to look at. 3/10

The food - The sausages appeared to be a decent enough pair, I enjoyed the taste and texture. Cooking them split in half seemed to dry them out way too much though which seemed like a great shame and waste of decent sausages to me. The bacon was slightly over cooked making it a bit chewy in places. The fried egg despite its appearance tasted ok and there was a trace of runny yolk hiding inside. The tiny portion of beans were average, the toast and tomatoes were quite nice. The item that stood out as being nicest was the thick cut mushroom slices, delicious. They say you eat with your eyes though and this is so true, I really struggled to enjoy this breakfast. 4/10

Value for money - The large breakfast included toast and a coffee, an entire coffee pot in fact. It cost £6.95 which on paper looked quite reasonable, having eaten it though it felt  overpriced for something that was presented so poorly. 4/10

Overall - This quaint tearoom is worth a visit just to experience the friendly welcome you'll receive here. It's a life line to many locals who eat here on a daily basis and the person running it is highly thought of in the local community, not just her work at Rosie Lees but her work throughout Loddon and the surrounding area. As far as the breakfast goes though it did seem really disappointing, particularly the way it was presented. The vegetarian option was dated and the menu slightly confusing. All of these things could be so easily changed for the better though with an edited menu, clean frying pan and serving sausages uncut. 6/10