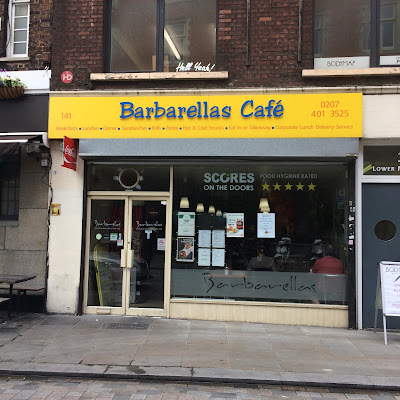 Barbarella's Cafe can be found just behind Waterloo station on Lower Marsh. 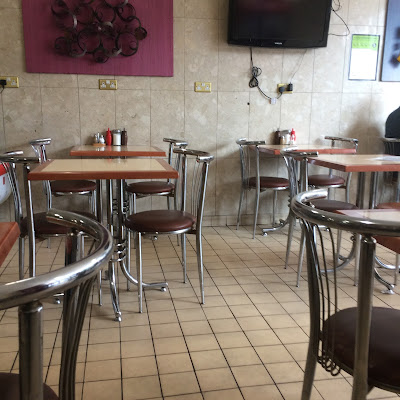 Inside is clean and spacious. 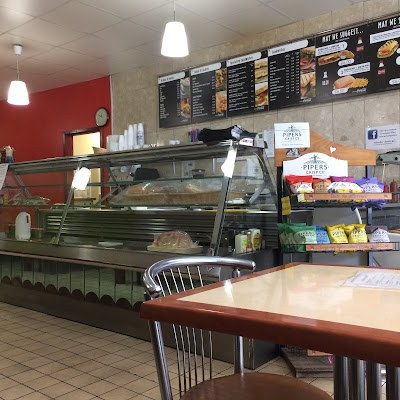 There's a counter which runs along the side of the cafe, further seating and toilets can be found beyond this. 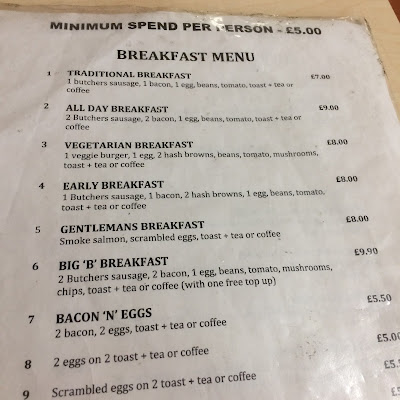 The breakfast menu offers a selection of breakfasts which include a tea or coffee. 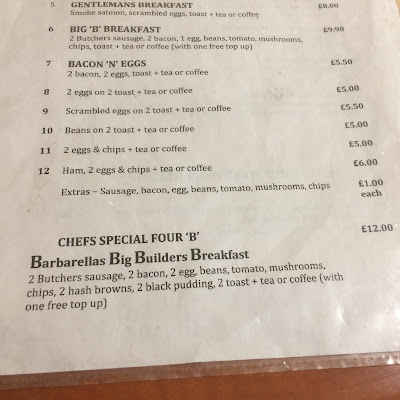 I must admit I was very tempted by the Four 'B' but settled for the Big 'B' in the end. 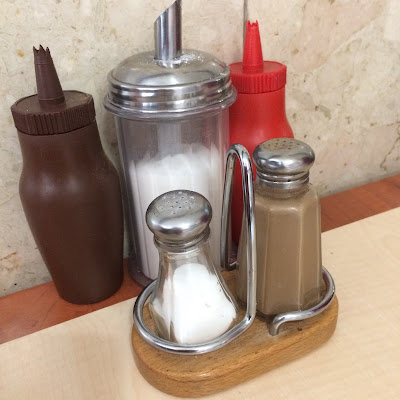 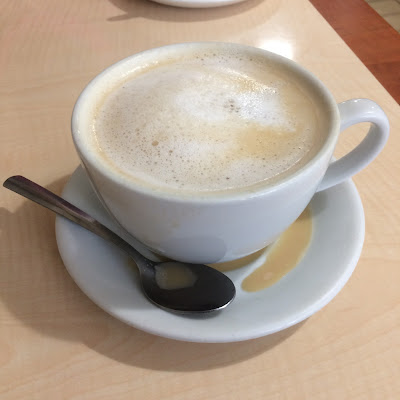 A frothy white coffee came with my breakfast. You may have to ask for the free top up though as nobody offered me one. 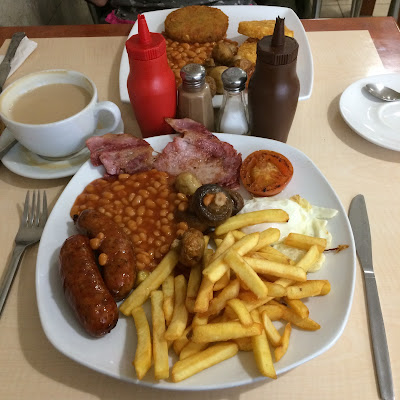 Chips with a breakfast! It was gone midday and I was hungry so I was quite up for chips today. 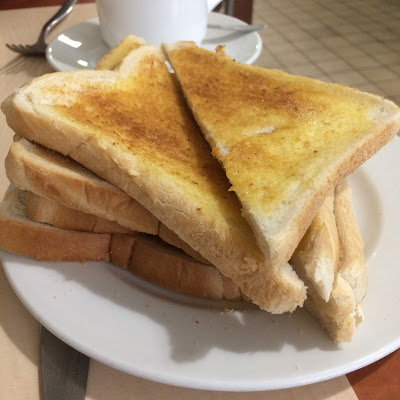 A side plate arrived with 2 slices of toast per person. 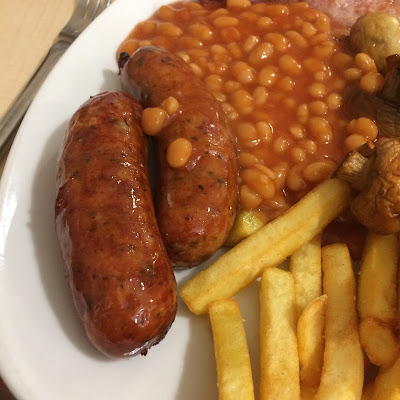 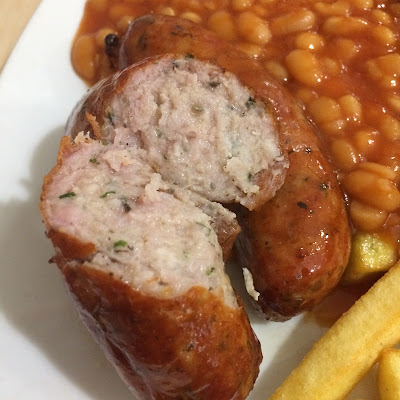 Deep fried but thick and juicy with a nice flavour. 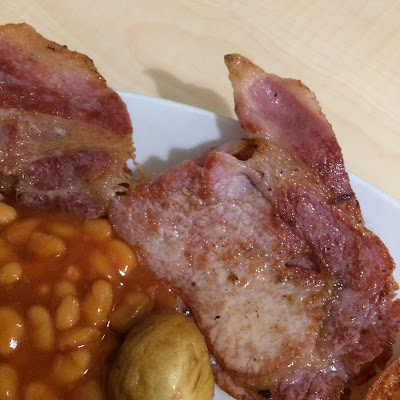 The griddled bacon was average at best. 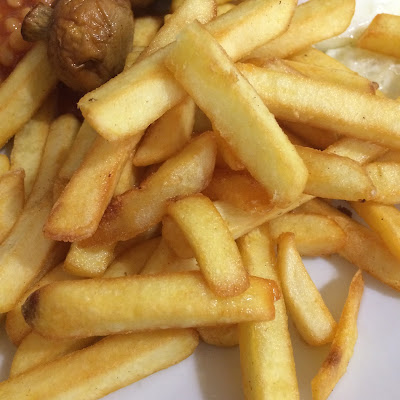 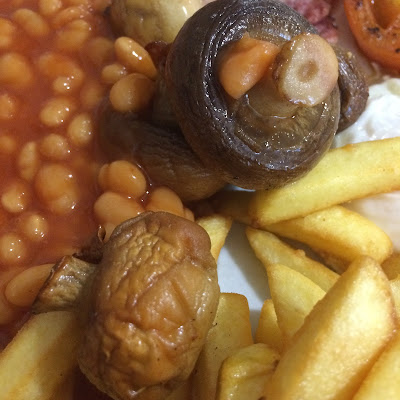 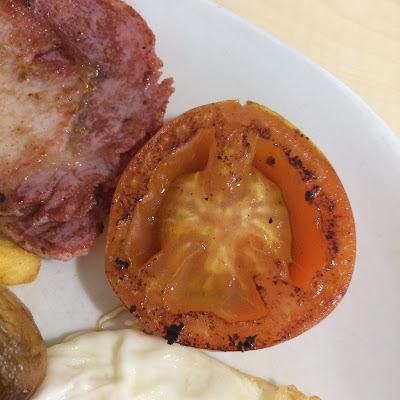 Not the tastiest of tomatoes so I dipped it in ketchup. 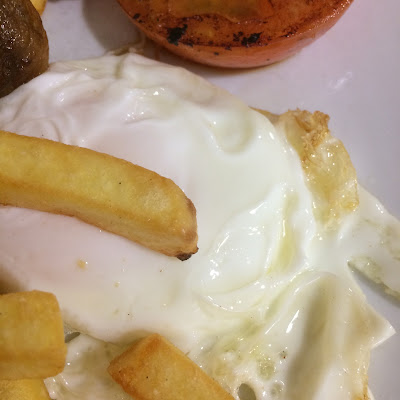 It was difficult to spot the egg yolk. 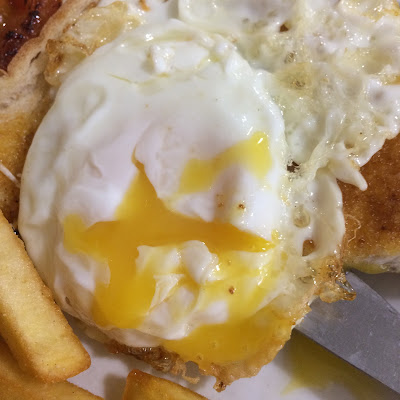 It was in there though, nice and runny too! 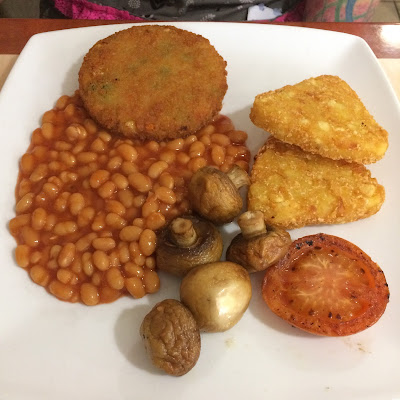 My wife ordered the vegetarian breakfast minus the egg.

We were visiting London for the day to visit the Moomins exhibition at the Southbank Centre. Our train arrived at Liverpool Street Station giving us just enough time to get to the Southbank Centre for 10am. This made a breakfast inspection in London quite tricky unless we could find somewhere serving past midday. To be honest it was such a nightmare trying to find somewhere online that was close to Southbank and offered a vegan option for my wife too. We'd pretty much given up on the idea, instead we were considering having lunch at Borough Market. Just as we were approaching London though my wife showed me Barbarella's facebook page. It looked quite promising so we decided to give it a look and from the Southbank Centre it was just a short walk away...

Upon entering - The five-star food hygiene rating on the window is hard to miss and was an encouraging sight. Once inside you'll notice that everything looks really clean and the cafe is much bigger than it looks from the outside. Plenty of well spaced out tables with menus and a neat cluster of condiments fill the vast dining area. On one side of the cafe is the large counter, beyond this you can find the toilets. It's full table service here so choose where you'd like to sit and decide what you'd like from the menu. Somebody comes and takes your order, cutlery arrives with the food and you settle your bill at the end. 7/10

Service - As we entered somebody welcomed us and invited us to choose where we wanted to sit. Whilst looking through the menu we were offered drinks, once the drinks arrived we placed our order. I noticed that my breakfast included a coffee with free top up, nobody returned to offer one though so perhaps you have to ask for one. The food arrived in good time and we paid at the counter on our way out. Certainly a friendly enough staff team working here and pretty efficient too, a point lost for not offering a coffee top up though. 6/10

Presentation - The Big 'B" breakfast certainly lived up to its name filling up a large plate quite nicely with the toast served on a side plate. Much of it looked deep fried and a few beans had gone astray, the egg yolk wasn't visible at first glance but it was intact, runny and just well hidden. 7/10

The food - The butchers sausages were deep fried with a pleasant taste and firm texture, the bacon was griddled and average at best. The chips and mushrooms were deep fried, it's not often I have chips on a breakfast but afternoon was upon me and I was feeling peckish so I soon wolfed them down. The fried egg had no visible yolk, it was in there though and released a nice runny flow which I dipped the toast into. The beans were plentiful and the tomato lacked much flavour. A pretty average breakfast really but the sausages certainly livened it up a bit. 6/10

Value for money - The Big "B' breakfast included toast and a hot drink and cost £9.90. It certainly filled me up and for London seemed like a reasonable enough price. I'd liked to have had black pudding but it wasn't available as an extra and the only way to get it appeared to be by ordering the £12 Four 'B' breakfast. The free coffee top up would have been nice but I wasn't willing to get up half way through eating to ask for it so another point deducted for not being offered it. 5/10

Overall - If you're looking for an independent cafe in the Waterloo area of London and you don't mind things being deep fried then this place is probably worth a look. The breakfast was big, the service was friendly and the environment was pleasant. I'd like to have seen a large breakfast that included double eggs, hash browns and black pudding. The only way to get all of those things though was to order the £12 Four 'B' breakfast which I thought seemed way too big and also came with chips. If you do visit Barbarella's Cafe be sure to check out the other shops along Lower Marsh, there's some great vintage signage and interesting shops to be found along this street. 6/10