Breakfast served
Saturday and Sunday
10am till 2pm 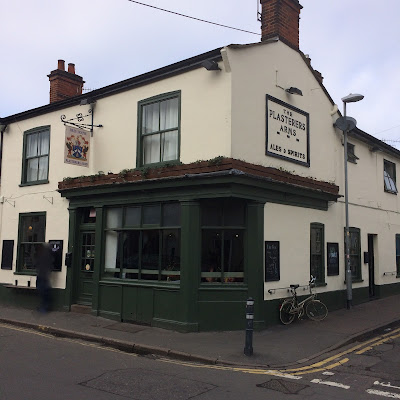 I walk past The Plasterers regularly but hardly ever go inside. As soon as I'd heard they were serving a Full English breakfast though I was there like a shot! 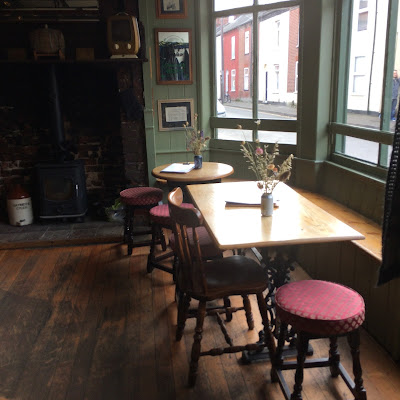 We arrived just after they had opened at 10am so it was nice and peaceful inside. 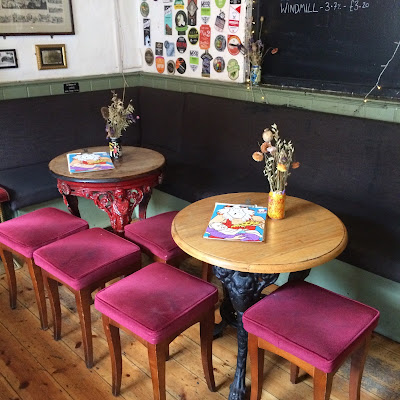 There's plenty of tables to choice from, we decided to sit by the window for the best light to take photos in. 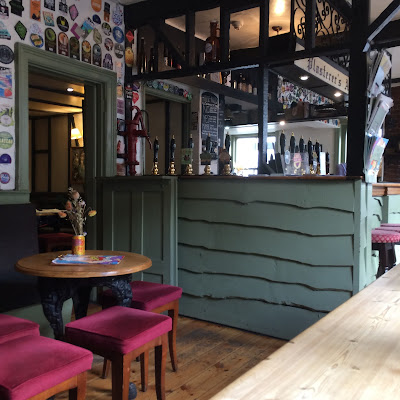 The Plasterers serve a vast selection of beers, ales and ciders. 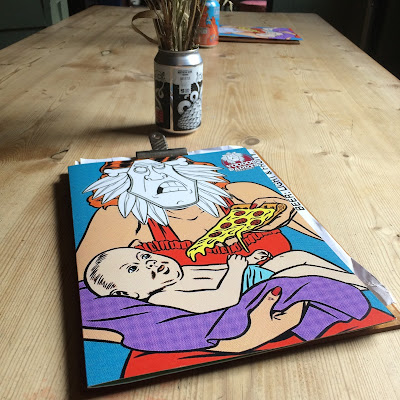 They also serve Voodoo Daddy's pizzas, I've tried the beast and the fat Elvis before and both were superb pizzas. 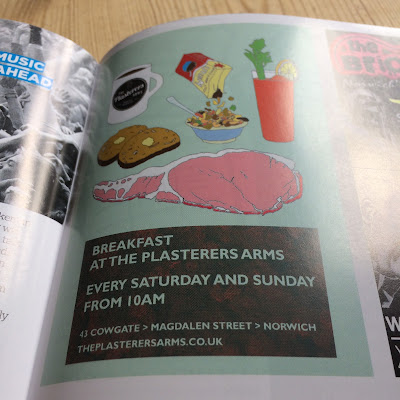 Outline magazine is available to read whilst you're waiting for your food to arrive. 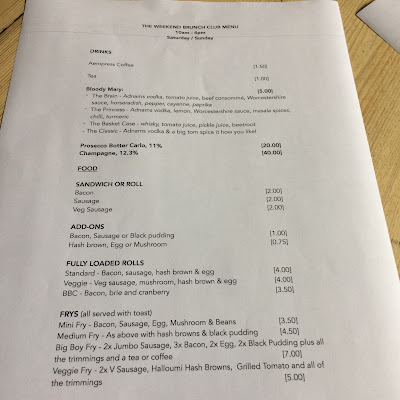 The breakfast menu is reasonably priced and offers a good selection of fry ups, breakfast rolls and bloody Marys. 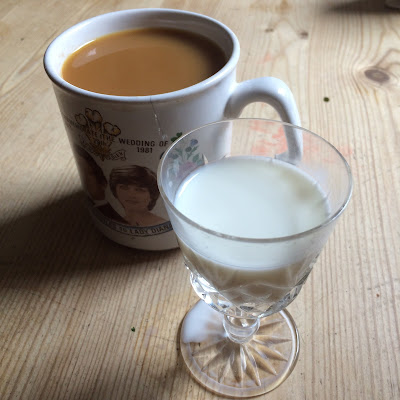 My big boy fry included a hot drink, I chose a coffee. The milk for the coffee arrived in a small glass which served its purpose quite nicely! 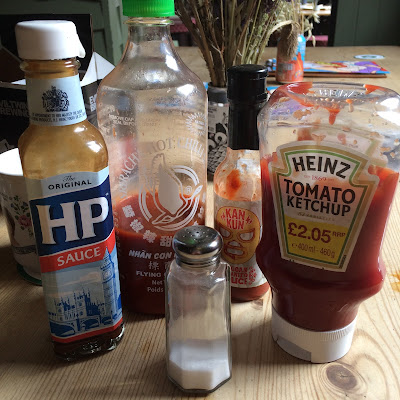 If you like hot sauces then you'll love it here. I'm not personally a fan of hot sauces but my wife loves them and I really appreciated the bottles of Heinz and HP. 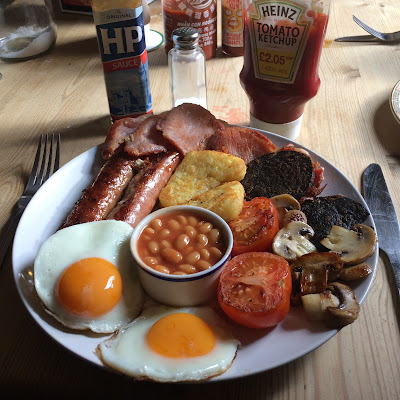 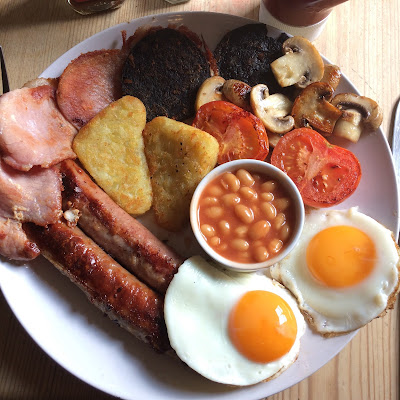 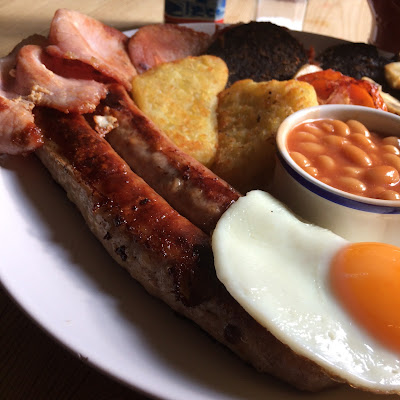 The jumbo sausages were huge and tasted good, they were from nearby Peter's butchers. 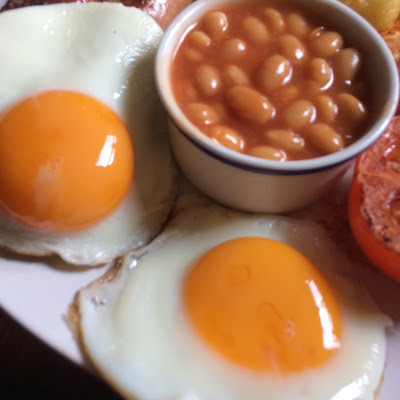 Very impressive eggs, I usually like the tops of the yolks cooked ever so slightly but these eggs were superb. 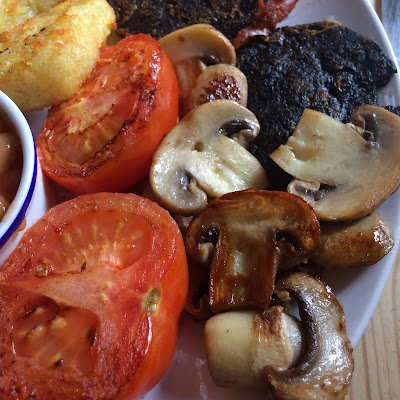 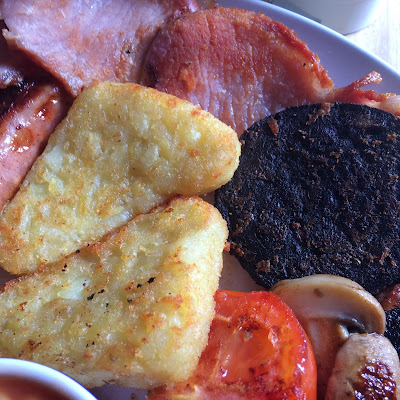 The hash browns could have been a tad crispier but not really an issue at all considering how good this breakfast was. 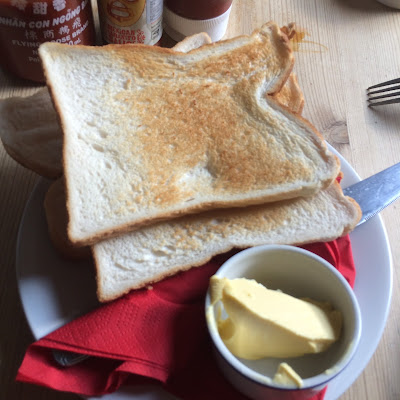 The breakfast also included toast, I enjoyed the eggs over one slice and the bacon between another slice. 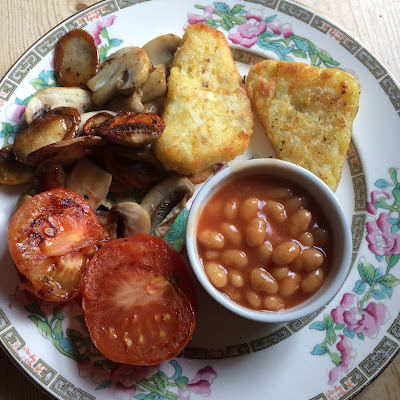 There isn't currently a vegan option on the menu but the staff were happy to let my wife choose the items she wanted on her breakfast. They told us they're working on creating a vegan breakfast which they hope to add to the menu soon.

I'd seen The Plasterers breakfast ad in Outline Magazine sometime ago now but was under the impression that it consisted of just breakfast sandwiches, cereals and bloody Marys. Then somebody posted a photo on my facebook page of a full English they'd eaten at The Plasterers. Less than a week later and my wife and I were making our way there to try it out for ourselves...

Upon entering - The Plasterers Arms is traditional real ale pub that looks great and feels really relaxing as soon as you walk in. There are different rooms to sit in with a selection of different sized tables to choose from. We chose the really big table at the front by the window for maximum daylight and plenty of space to spread everything out. The breakfast menu is only available at weekends but is served until 4pm, perfect if you're nursing a hangover from a late one at Karma Cafe but need a fry up to make you feel sane again. The menu offers a selection of filled rolls, bloody Marys and cooked breakfasts, there's a veggie fry up available and a vegan fry up is being added to the menu soon. Choose what you want from the menu, place your order and pay at the bar, everything's brought over when it's ready. The sauce selection is impressive here with not just the usual Heinz and HP but also Sriracha and Kan Kun sauces for those that want to give their breakfast a hot kick. I'm not a fan of hot and spicy but my wife made a beeline straight for the Sriracha sauce. It was certainly a very pleasant place to enjoy a spot of breakfast and at 10.30am very peaceful and relaxing too. 8/10

Service - The staff here were helpful, relaxed and really friendly from the moment we arrived. We were already aware that a vegan breakfast wasn't currently available on the menu but the staff were more than happy for my wife to choose the items that she wanted on her breakfast. With our order placed and paid for at the bar we sat down to have a quick browse through Outline Magazine, for possibly the first time ever we didn't recognise anyone we knew in the caught out section, must be a first! The drinks were brought over to us, they couldn't find the tea spoons so bought us a table spoon instead, no worries it got the job done! The milk arrived in a very ornate sherry glass, again it done the job and looked really pretty. Next to arrive were the sauces stored neatly in a takeaway beer carrier (nice touch!) and cutlery wrapped in a serviette. Shortly after this the breakfasts arrived with a side plate of toast. Our plates were cleared away at the end and we were asked how everything was, this was a good opportunity for me to find out who supplies the meats and for my wife to ask about a Vegan fry up. We discovered that the ingredients used on the breakfasts are sourced as locally as possible which makes perfect sense and a vegan breakfast is being added to the menu soon. 8/10

Presentation - Very tidy indeed, beautifully presented and the plate was just the right size for the amount of food on it. The eggs were looking perfect and I loved the way one of them was draped over the sausage with the yolk clinging on for dear life. The hash browns and tomatoes were looking like they could have been cooked for slightly longer but there was no doubt in my mind that this breakfast looked impressive. It was a very photogenic breakfast and it seemed a shame to cut into it, I had a job to do though so I freed the cutlery from the grip of the serviette and got on with it. 9/10

The food - It's not often that I come across jumbo sausages on a breakfast and having two meant there was certainly plenty of meat on the plate. The sausages from the nearby butchers (Peters) were a great choice, a nice thick meaty sausage with a good firm texture and great taste. The bacon was really nice too, browned in places and delicious between a slice of toast covered in ketchup. The black pudding was fairly standard and cut quite thin and the hash browns could have been crispier, both still enjoyable though. I'm always slightly concerned when eggs are served sunny side up in case a raw egg white flood occurs. Thankfully the chef here knows his stuff though, the fried eggs were spot on and a real pleasure to cut into. The tomato was full of flavour, the mushrooms were perfectly cooked and the beans were as you'd expect. The toast was standard white sliced, an ideal base to pop the yolks onto from those great fried eggs. 8/10

Value for money - For just £7 the Big Boy Fry is excellent value for money. There's a lot of meat on the plate and it comes with toast and a hot drink too, bargain! 9/10

Overall - Just when I thought NR3 couldn't get any better for breakfasts The Plasterers add to the excellence! If you fancy a pint of real ale with your breakfast or just prefer a pub atmosphere then The Plasterers is well worth visiting. The friendly service and relaxing atmosphere of the pub make it a good place to enjoy the great breakfasts being served here. Remember they only serve breakfast at weekends but with them being served till 4pm there's still time to enjoy the best hangover cure even after the latest of nights out. 8.5/10 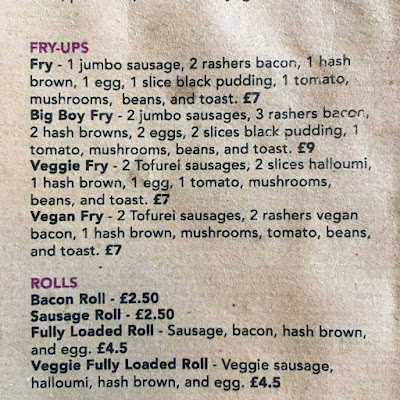 The big boy now costs £9 and no longer includes a hot drink, still a lot of fry up for your money though. There's now a vegan breakfast on the menu too which delighted my wife. 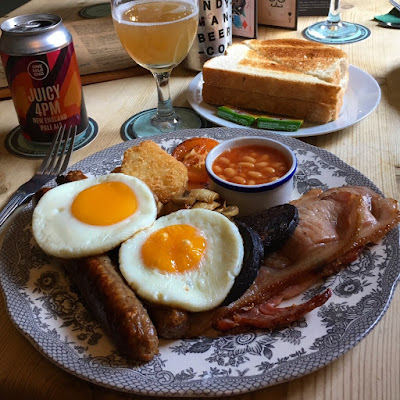 It was lunchtime so instead of a coffee I enjoyed a Juicy 4pm ale with the big boy breakfast, A great combination! 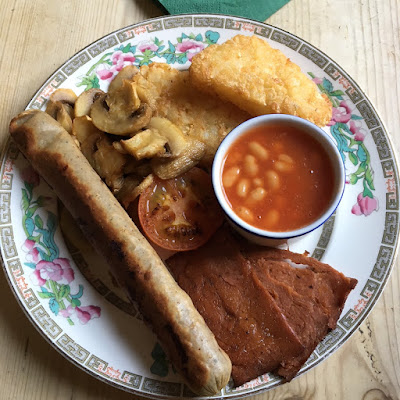 The vegan breakfast, they'd run out of Tofurei sausages but the jumbo replacement was superb. 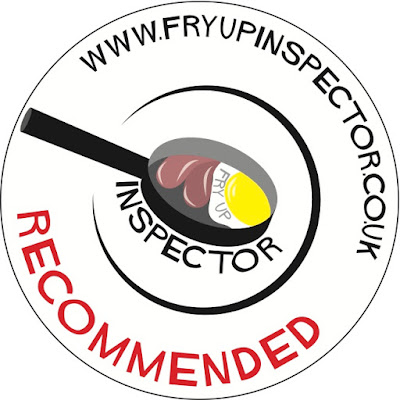