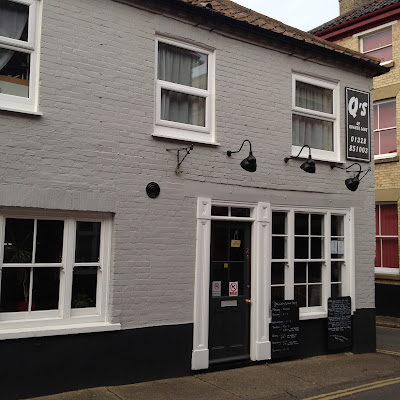 Q's is nice and central in Fakenham, I parked for free at the nearby community centre. 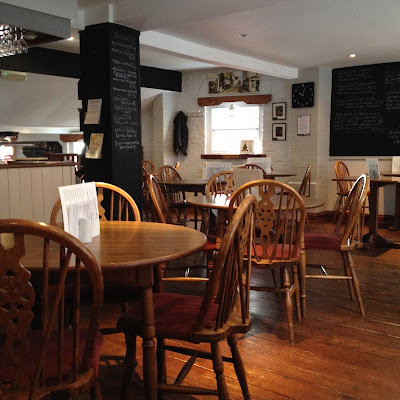 I arrived shortly after they opened so the place was still empty. 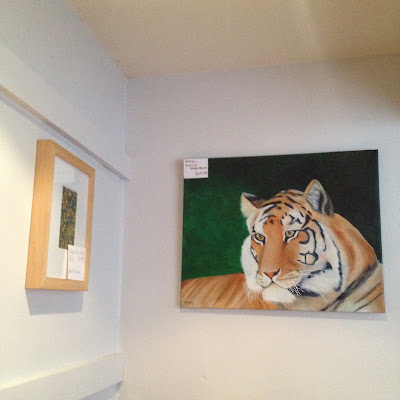 Local artists work is displayed on the walls and available to buy. 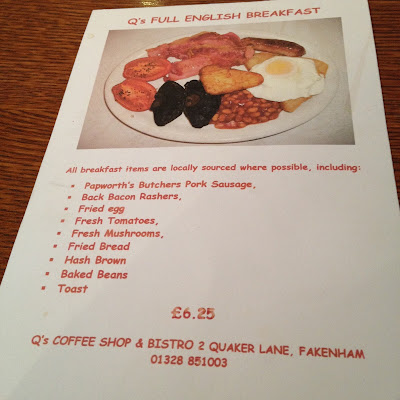 I was delighted to see fried bread on the list and it was nice to see locally sourced ingredients on the menu. 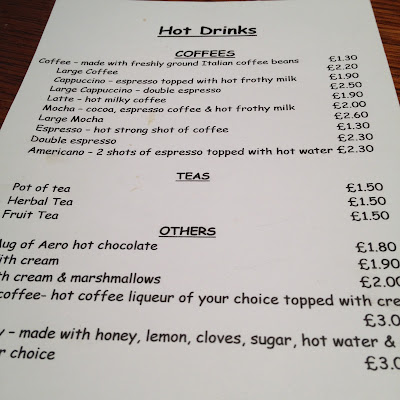 The coffee here sounded quite promising. 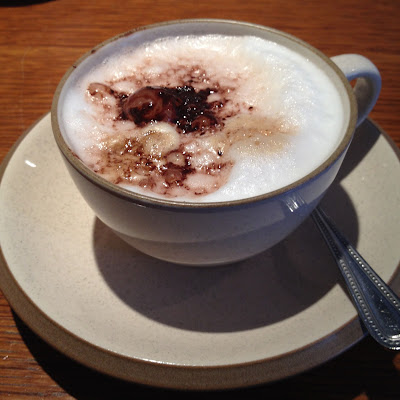 The cappuccino wasn't great though. 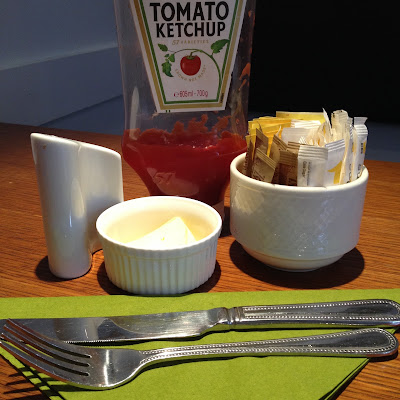 The butter, cutlery and ketchup arrived at the table first. 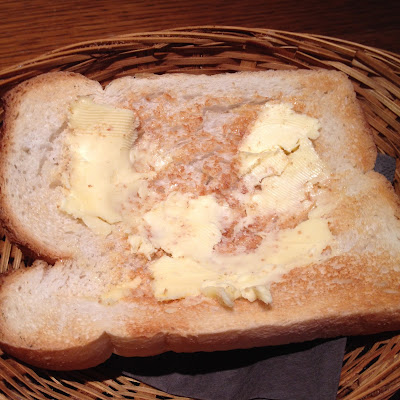 The breakfast comes with one slice of toast cut from a quality loaf. 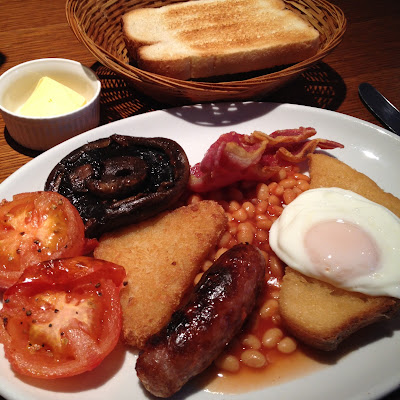 First impressions were good and I love an egg served on top of the fried bread. 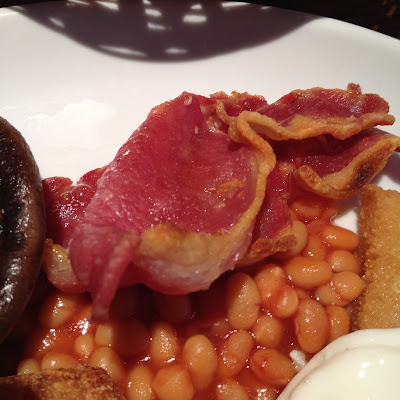 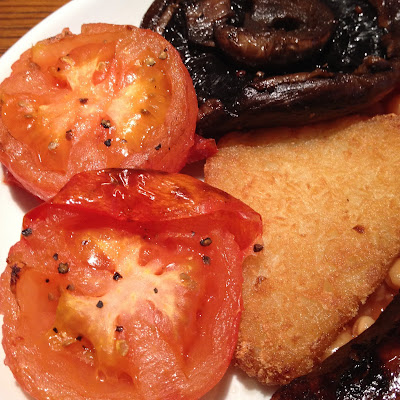 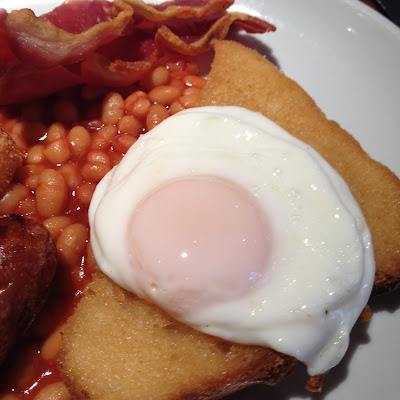 The fried bread was excellent and the egg looked great. 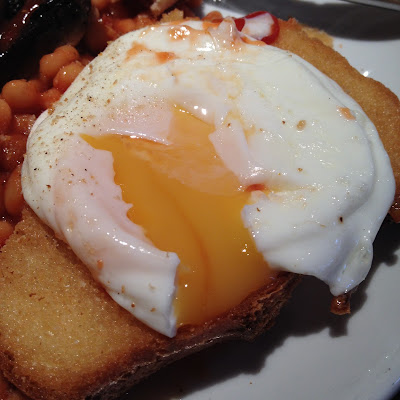 Yolk seeping into fried bread is a wonderful sight!

I can't recall visiting Fakenham before so was delighted when my wife announced that she'd be selling at the local makers market, the perfect excuse for my first Fakenham inspection! I did some research on the Fakenham breakfast situation but felt I'd hit a brick wall with many people telling me that finding a decent breakfast there could be tricky. In the end I narrowed my options down to four places in the town centre, Q's Coffee Bar and Bistro was the nearest so as soon as they opened I headed through the door...

Upon entering - The interior is very traditional with nicely spread out tables and local artists work is displayed on the walls. With no other customers and no background music it was incredibly quiet, I could hear every foot step as the staff moved around inside. This was perfect for taking photos but it did feel a bit like I was sitting in a waiting room. I couldn't see any mention of a cooked breakfast on the menu so ended up asking, I was given a separate breakfast menu from the counter. I placed my order at the counter and chose a table in a nice secluded area in a corner, perfect for taking more photos. The tables already had menus (but not the breakfast menu) and salt & pepper on them. Before the food arrived I was offered sauces and my coffee arrived with sugar sachets, cutlery and a serviette. On my way out I settled my bill at the counter, some more customers had arrived by this point
and hearing other voices in the background was a welcome from the deadly silence. 6/10

Service - The lady serving me was nice and friendly, she explained that there might be a slight delay as the chef had encountered a puncture on his way to work. I had plenty of time so was happy to wait but to be honest everything took the same amount of time as usual in a breakfast scenario. Once my order was placed and my drink had arrived I was asked if I wanted any sauces, sorting out sauces before the food arrives is definitely a good idea and ensures you can eat without further delay. I paid on my way out at the end and left feeling I had been made to feel welcome here. 8/10

Presentation - I was delighted when I saw the breakfast being placed in front of me and then I saw the over cooked bacon. The fried bread and egg perched on top looked great though. I think this was the first time since starting the blog that toast had arrived in a basket, maybe a Fakenham thing? 7/10

The food - I was looking forward to trying the Papworth sausage but suspect I didn't experience it at it's best, sadly it had a strange chewy texture, I suspect it had been overcooked. The bacon was incredibly tough, I popped it between the nice buttered toast and struggled my way through occasionally dipping it in the bean juice, tough bacon certainly wasn't for me though. The hash brown and beans were fairly standard, the tomato fairly tasteless and the mushroom incredibly delicious. The highlight of this breakfast was found on the east side of the plate though, an excellent and crispy slice of golden fried bread topped with an almost perfect fried egg with nice runny yolk. 5/10

Value for money - Q's full English breakfast cost £6.25, had it been cooked nicely throughout it would certainly be a decent price. Sadly the overcooked meats left me wishing I had gone elsewhere for breakfast. 4/10

Overall - A pleasant enough place with good service but sadly the breakfast left me feeling a bit disappointed. The sausage was clearly good quality but overcooking it was a real shame and the same can be said for the bacon. The fried bread and fried egg were both excellent though but this wasn't enough to make me consider returning here for breakfast again. The search for a decent breakfast in Fakenham continues... 6/10