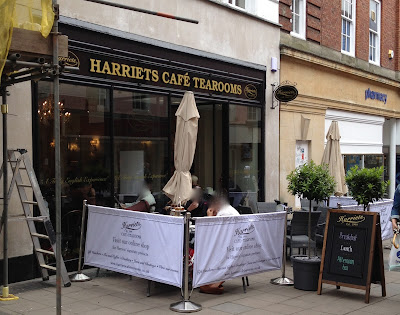 Harriets already have tearooms in Bury St Edmunds and Cambridge, they've recently just opened this one on Norwich's London Street. 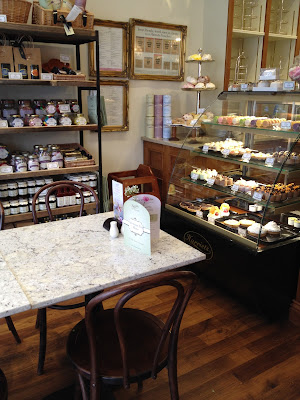 At the counter they offer a vast selection of cakes and preserves, I was here on savoury business though. 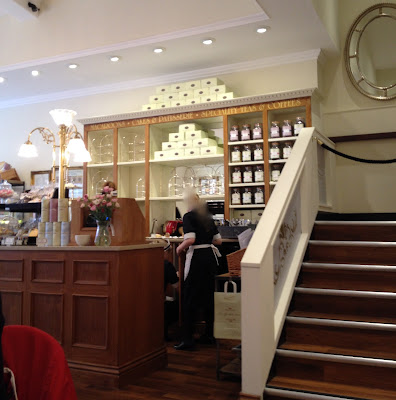 The interior is fairly grand and the staff wear traditional maids uniforms. 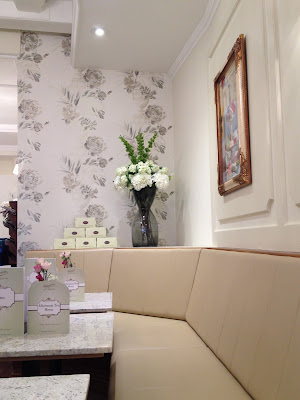 The vintage styling works well here for the "yesteryear" look they're going for but I thought it felt quite soulless. I prefer a more genuine look that feels loved, Biddy's Tearooms and Pandora's Kitchen are good examples of this. 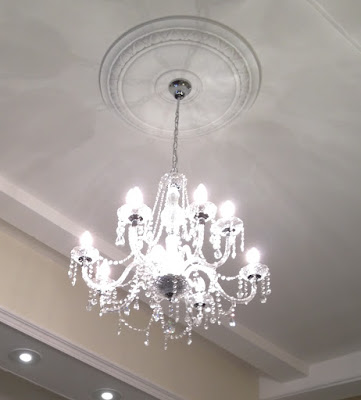 Chandeliers hang from the ceiling. 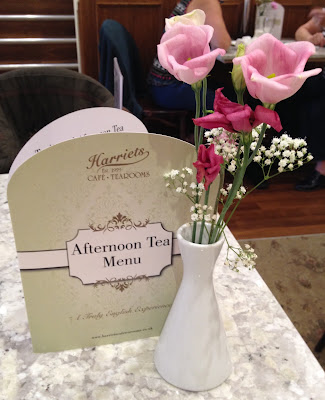 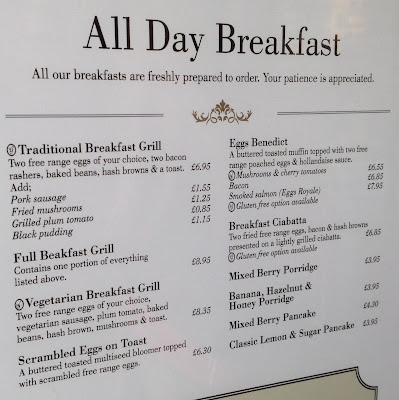 I'm really not a fan of paying extra for essentials like sausages or beans, thankfully the "Full Breakfast Grill" (or beakfast as it reads on their menu) seemed like the best option. 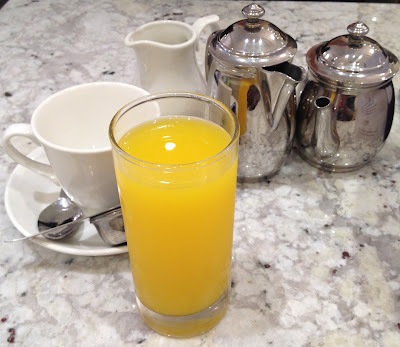 The drinks menu seemed really expensive, the cheapest tea was £2.90 and many of the coffees cost over £4! I was given the option of adding an orange juice to my breakfast for an extra £2 so I took it. 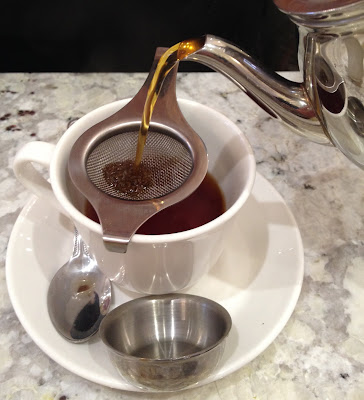 This was a beautiful sight, a teapot that pours nicely. 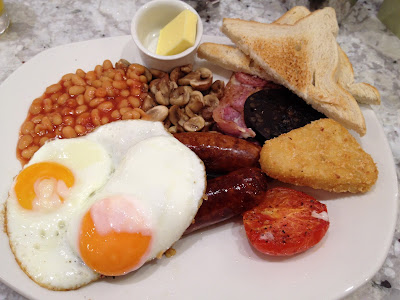 I was expecting single items on the full breakfast grill so the sight of sausages and eggs in pairs was a nice surprise. The breakfast looked more like something you would expect to find at motorway services rather than a tearooms but it tasted nice enough. 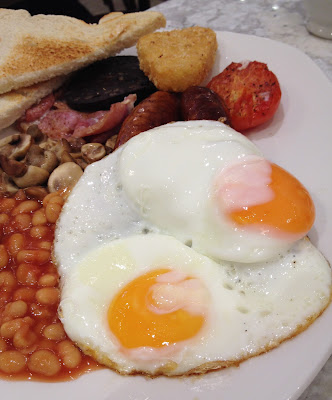 I was certainly happy enough with the eggs. 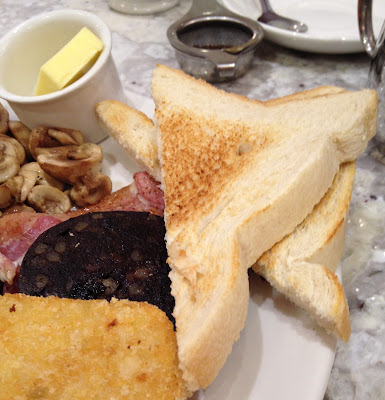 For such an upmarket place I was quite shocked to find the toast perched on the edge of the plate, served on a side plate would have looked much better 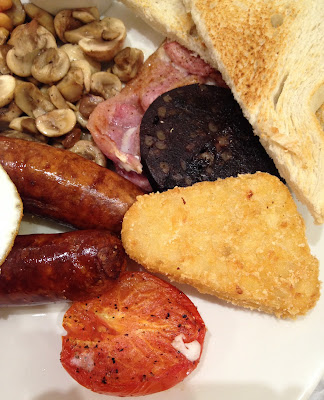 The hash brown, black pudding and tomato were all fairly average but the bacon was really soft and incredibly salty. 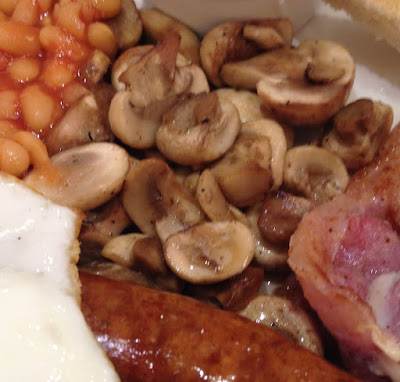 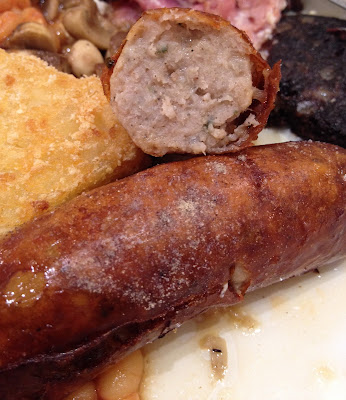 Quite nice sausages but only slightly better than the type Wetherspoons serve. 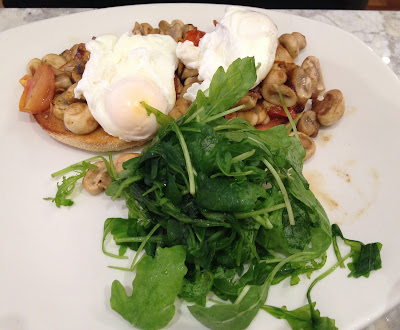 My wife chose eggs benedict with mushrooms and tomatoes. Initially it arrived at the table without eggs so had to be sent back. 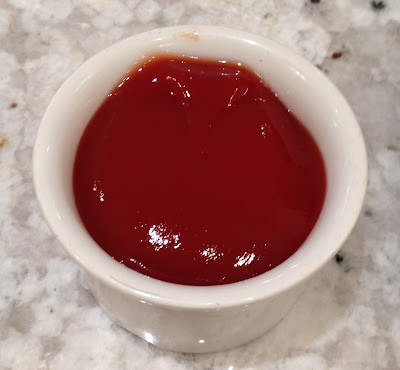 Ketchup is served in small pots and available on request.

I'd been watching 38 London Street transform into Harriets Tearooms for a couple of months and knew an inspection would be imminent after their opening on 9th June. My visit was very spontaneous though, my wife and I were heading into the city having not eaten lunch and their all day breakfast suddenly seemed like a plan...

Upon entering - There were tables outside which seemed like a tempting option but I had photos to take so we headed inside. It had certainly been transformed into a grand looking tearooms with chandeliers hanging from the high ceilings, patterned wallpaper and large pictures in decorative frames. I could immediately see this place would appeal to many, particularly tourists looking for that afternoon tea experience. Personally though I prefer a more individual and kitsch looking interior for a tearooms, this place felt a bit soulless to me. There's full table service here with staff wearing traditional maids uniform. Wait to be seated and choose what you would like from the menu, these can be found on each table. Once you've placed your order the drinks arrive first followed by cutlery and eventually the food, sauces are available on request. The bill arrives at the table before the food giving you plenty of time to check it's correct, pay at the counter on the way out. There are plenty of tables here but not much space to squeeze between them, the lady sitting next to us mentioned she had already spilt somebody's cup of tea trying to sit down. I quite enjoyed my time here but the whole traditional tearooms scenario felt a bit forced, I recently visited the Assembly House and that felt like the real deal to me. 7/10

Service - The service here was very good and everything was flowing nicely, we were shown to a table and giving enough time to study the menu before placing our order. Drinks arrived first and shortly after that the food, something didn't look quite right though, my wife's eggs benedict had arrived with no eggs. The plate was taken back to the kitchen and I was given the option of returning mine too, I decided to hang on to mine though in case it was held under hot lamps. My wife's eggs benedict returned whilst I was about halfway through eating mine, in this situation I would expect to not be charged for the drinks but we were though. Apart from the missing eggs situation service was fairly impressive and everyone certainly seemed to be making a good effort to impress. 7/10

Presentation - The breakfast didn't seem to visually match the surroundings it was being served in. The toast sat perched on the edge of the plate making me momentarily think I was at a roadside service station. The food all looked ok but I didn't feel hugely excited about eating it as it looked nothing more than average at first glance. 6/10

The food - Nothing stood out on this breakfast as being particularly special or memorable. The sausages were quite nice but only slightly nicer than those served by Wetherspoons, the bacon was really salty and soft. The eggs with nice runny yolks were the highlight served on top of the buttered toast, everything else was fairly standard so not much to say really. I will mention the mushrooms though, tiny and quite tasteless. On a positive note it was served nice and hot. 5/10

Value for money - The full breakfast grill with an orange juice cost £10.95, it really wasn't that special though and so many other places in Norwich can do a much better breakfast for under £10. 5/10

Overall - I can certainly see Harriets being a popular hot spot for tourists and afternoon tea lovers. The all day option on the breakfasts means it's available until 6pm on most days but with so many better breakfasts out there I can't see why you would feel the need unless everyone else had stopped serving or you have an uncontrollable urge to spend over £4 on a coffee. The service here was good but on my search for the perfect breakfast I discovered little more than an average offering that wasn't really for me. 6/10