Flight VS900
Heathrow to Tokyo

Breakfast served daily at around 7.30am JST 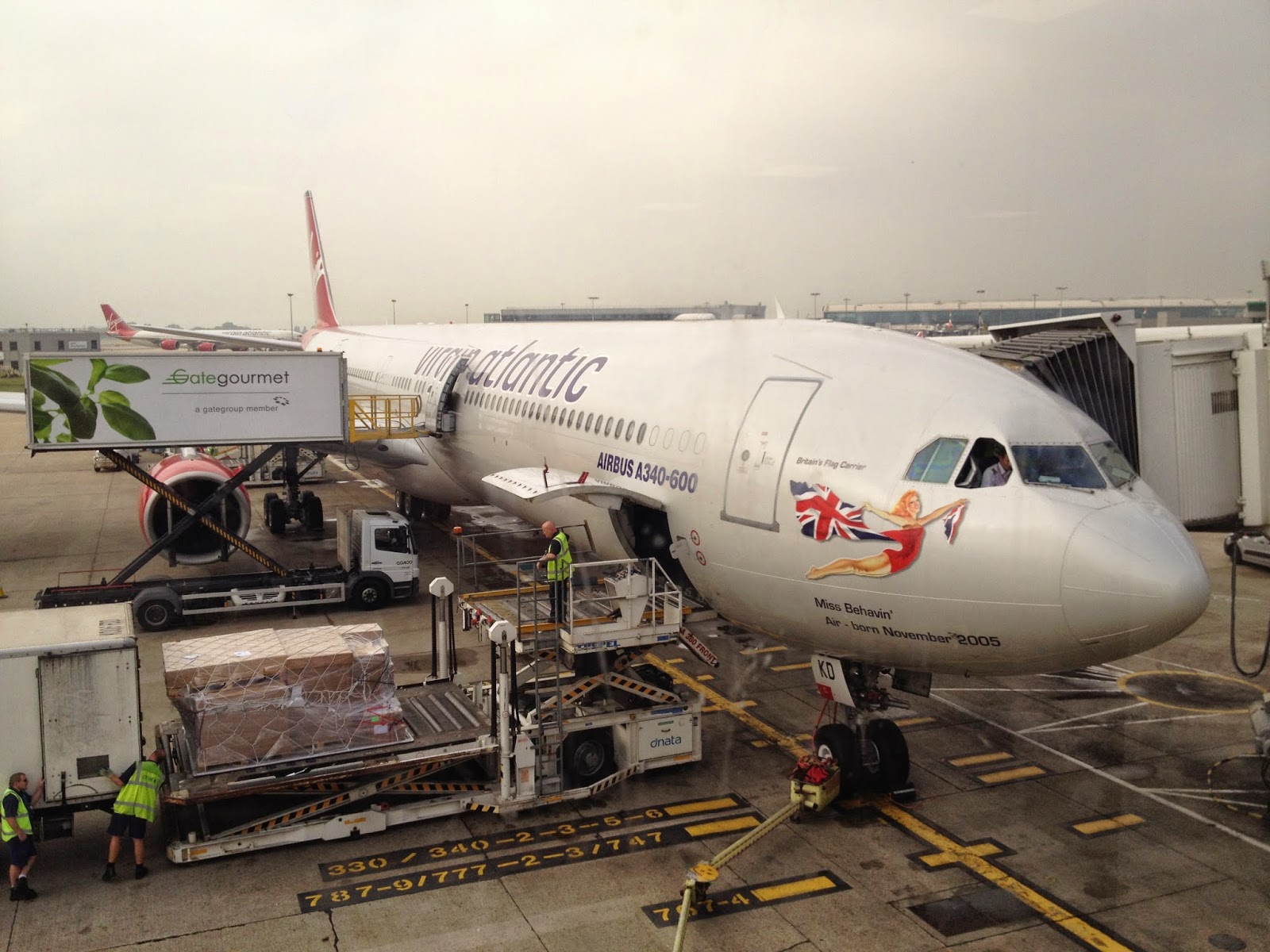 I love flying and a 12 hour flight covering 6000 miles was an exciting prospect. My wife is a nervous flyer though and the name of the plane was Miss Behavin' which caused initial concerns. Thankfully this was the smoothest ever flight though and this Airbus behaved incredibly well! 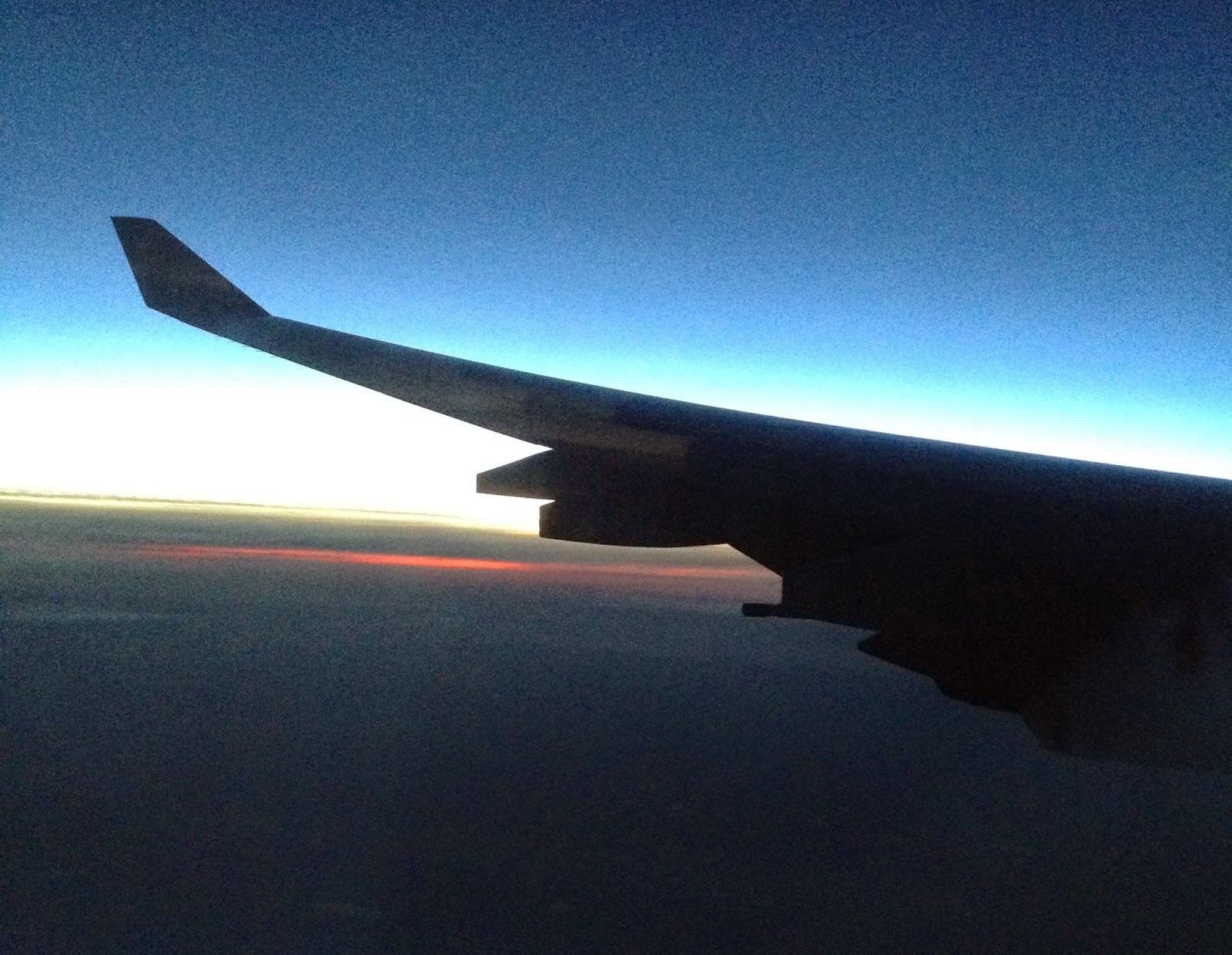 As the sun started rising the clattering of the breakfast trolley could be heard coming up the aisle. 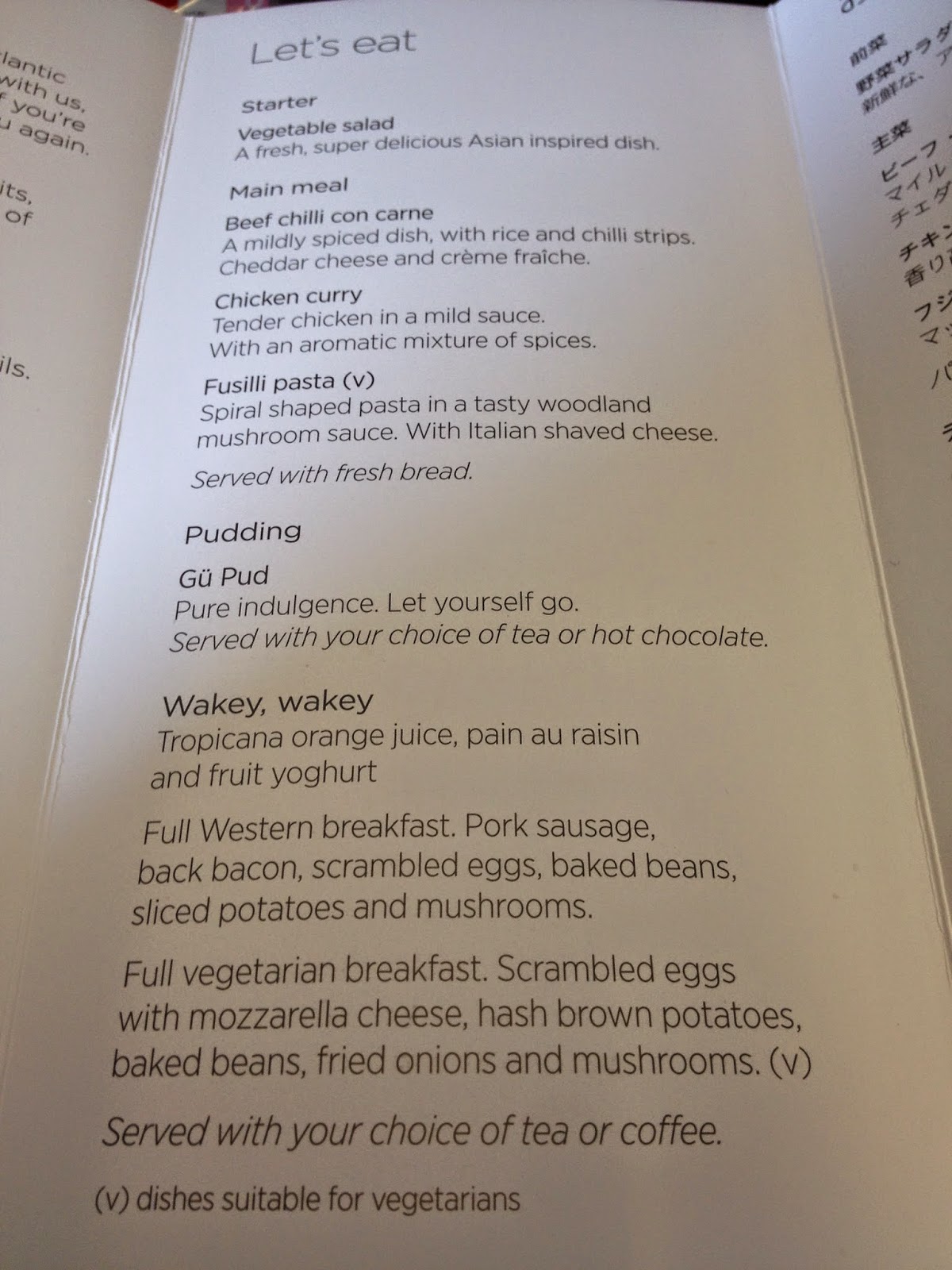 The menu was given 9 hours before breakfast time, plenty of time to decide I would be choosing the Full Western breakfast. 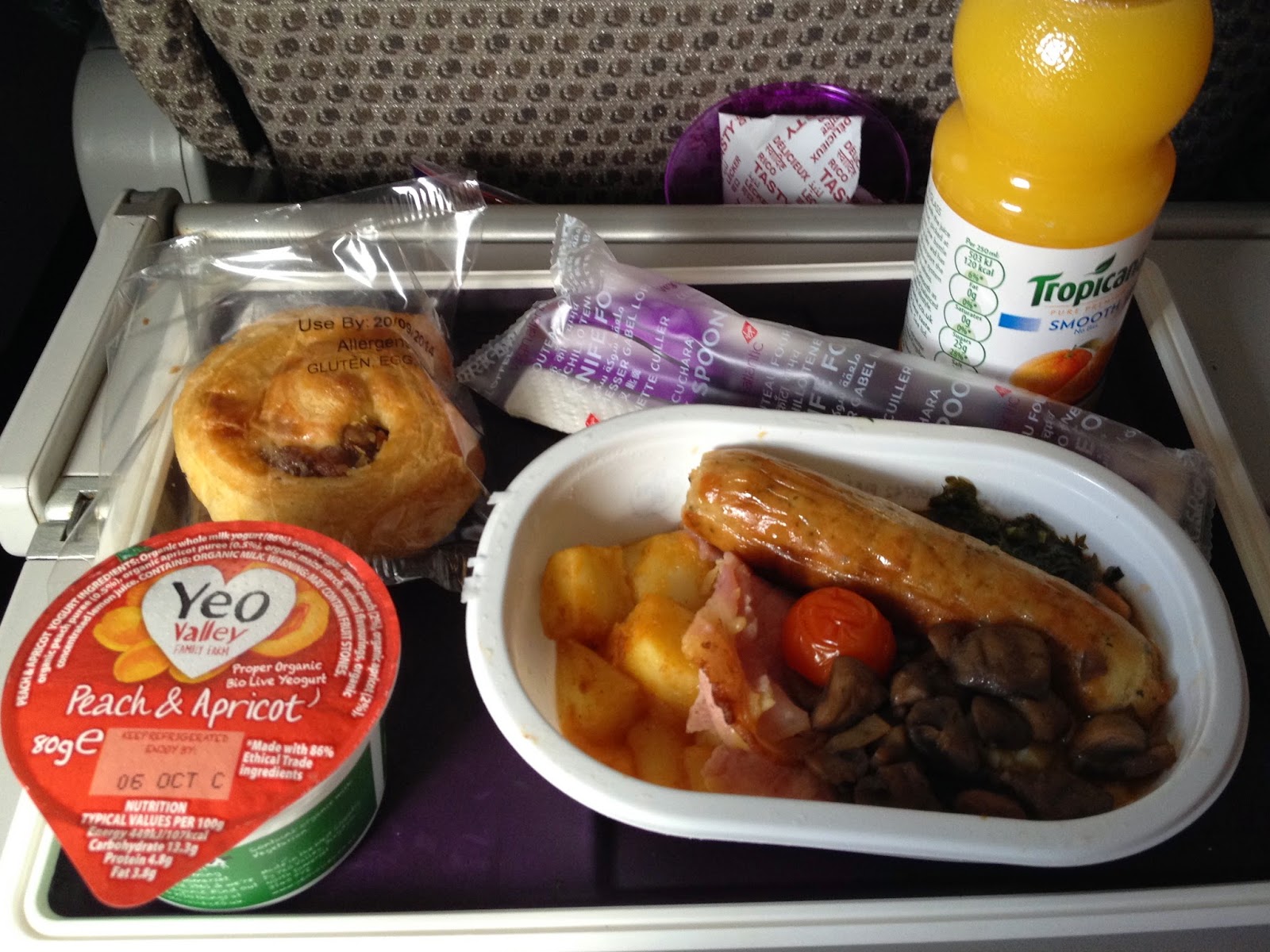 Having eaten throughout the flight and watched the Northern lights for over an hour the breakfast arrived. It was 7.30am JST on a Saturday morning but 11.30pm GMT Friday evening, I was quite tired having not slept but was finally about to have a cooked breakfast in economy on a flight. 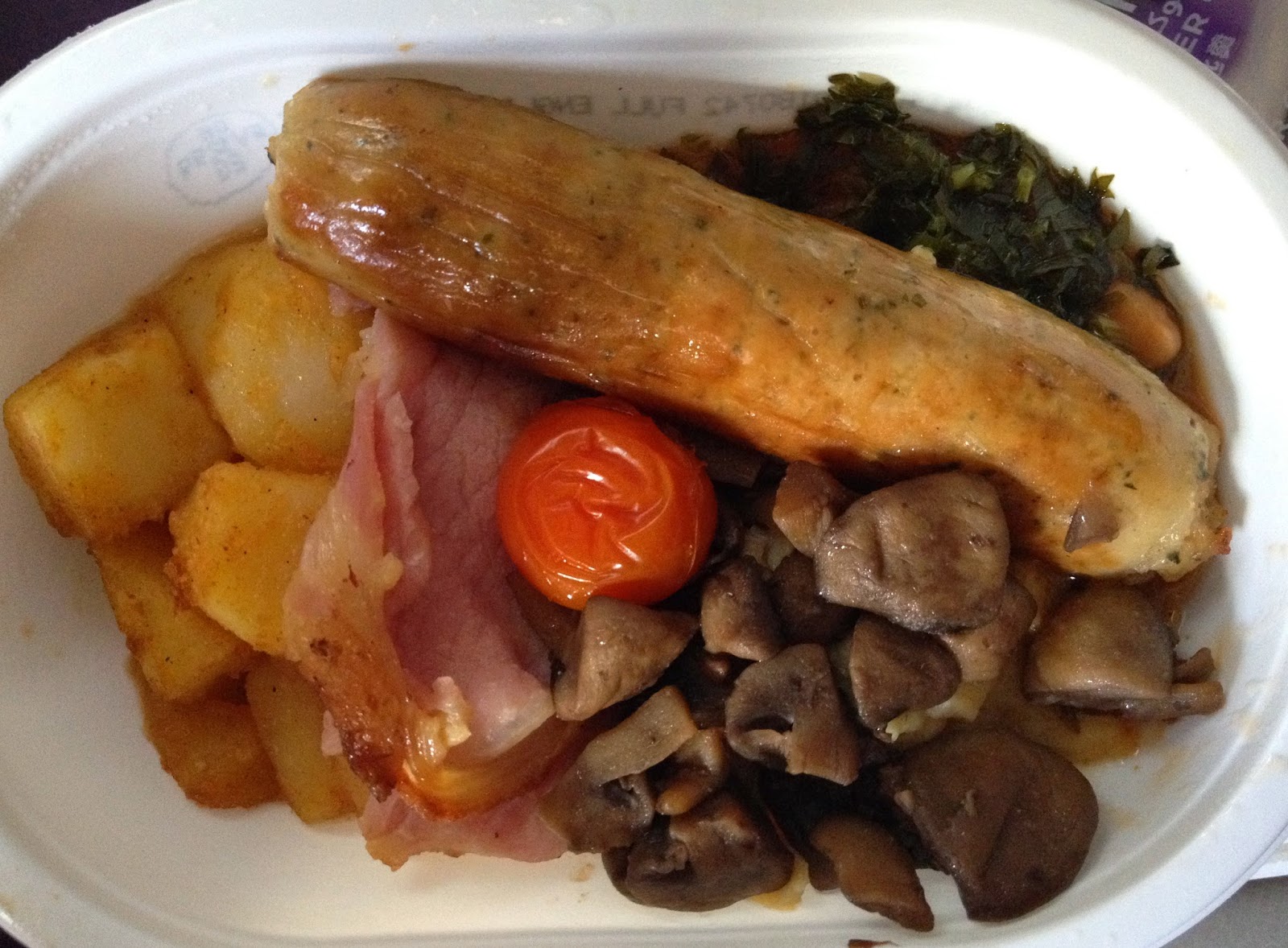 Ok, so it may look a fairly sorry sight but it was not that bad at all really. 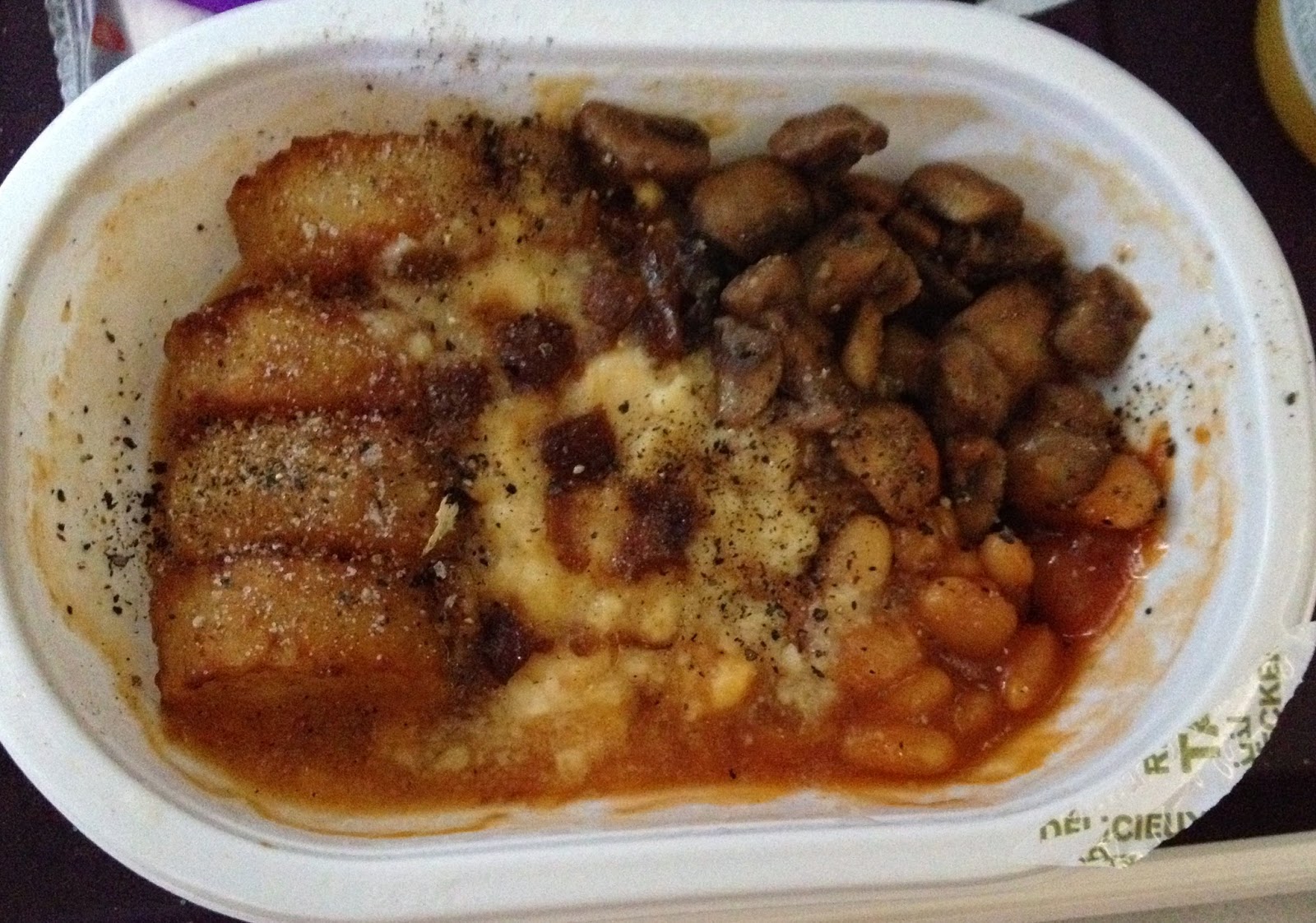 The veggie option looked even less appealing, my wife thought it was ok for airline food though and it certainly tasted better than it looked. 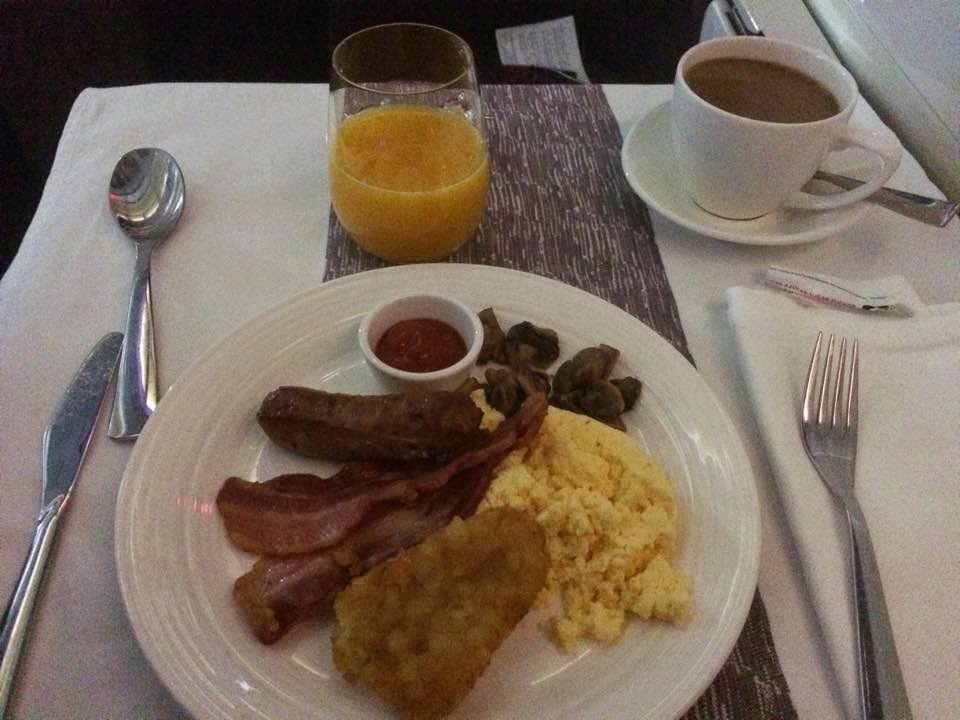 Gary McMeekan kindly sent me this photo of his breakfast onboard flight VS900 in upperclass, I have added it so you can compare the difference.

It was around 10 hours into the flight when the main lights were turned up again, the smell of breakfast filled the cabin and the trolley could be heard approaching from behind. About halfway through the flight I had briefly opened the blind on the window to see if it was still dark outside. The view as I opened it I will never forget, the Northern lights were clearly visable glowing bright green for over an hour, something else ticked off the bucket list! Most people were sleeping through this but my wife and I were suddenly quite glad we had been unable to sleep! As the breakfast trolley got closer my expectations about the cooked breakfast were quite low as I was fully aware of the limitations of catering on board a flight..

Upon entering - The Airbus A340-600 is wide bodied airliner capable of carrying up to 440 passengers. We chose to travel economy as business class was ridiculously expensive and the difference in price would pay for an additional holiday somewhere else! Being in economy just behind the wings we were fortunate enough to not be sitting next to any other passengers due to the 2-4-2 seating layout, this was an added bonus. A menu was given to us over 9 hours before breakfast, it covered everything we would be eating during the flight. No need to get up for anything unless you wanted to stretch your legs or use the toilet, everything is handed to you in your seat. The seat in front has a tray which folds down, space is a slight issue so use it wisely and everything just fits on. Simply decide what you want from the menu and tell the air hostess as they pass your seat.  Salt, pepper, cutlery, serviette and drinks all arrive with the food. No need to pay as you did that when you booked! The seats are comfortable enough and there is some background noise but a fairly enjoyable breakfast experience can be had whist travelling over 500mph over China. 6/10

Service - The cabin crew on this Virgin flight were excellent, efficiently seeing to every customer in a very proffesional and friendly manner. Having decided on the Full Western breakfast I simply told the air hostess who within seconds handed it to me with a smile, moments later a hot drink was offered from the drinks trolley. A bit later somebody came along to collect the trays and rubbish, again very friendly and polite. Even better than BA and so much better than Easyjet, a top job Virgin Atlantic! 9/10

Presentation - Preheated hours before and served in a plastic dish, you peel the lid off and hope for the best. It did look a bit better than I was expecting if I'm honest, for an economy class full English I was thinking "not bad at all". The eggs and beans were well hidden at the bottom but the container shape made it impossible for everything to be visible and it was all piping hot. 5/10

The food - The sausage was perfectly acceptable and quite tasty with a reasonable texture considering it had been kept hot for so long. The bacon was quite nice and the potatoes not too bad either, they were soft but again this was to be expected so not a problem. The beans were in a sauce that had reduced very nicely and the scrambled eggs had done incredibly well to last so long in the heat. The mushrooms were ok and the tomato collapsed as soon as I touched it, it still had some flavour to give though. I never usually eat yogurt but found it quite refreshing and the pain au raisin was quite dry but accompanied the coffee nicely. 5/10

Value for money - The return flight covered 12000 miles and included 2 hot meals each way, movie snacks and lots of drinks at a cost of £640. Last time I flew with BA I was given a continental breakfast so I was quite happy with the cost of this flight and what came with it. 6/10

Overall - For an economy class breakfast that had been kept hot for many hours before being served I was quite happy with it. On a long haul flight any meal that arrives breaks the flight up a bit and gives you something to do and look forward to. Obviously if I was at the front of the plane in Business class I would have not been so happy but all things considered Virgin done pretty well. The view outside before breakfast and the amazing service is what I will remember the most though. 6/10