Breakfast available daily from 9am till midday 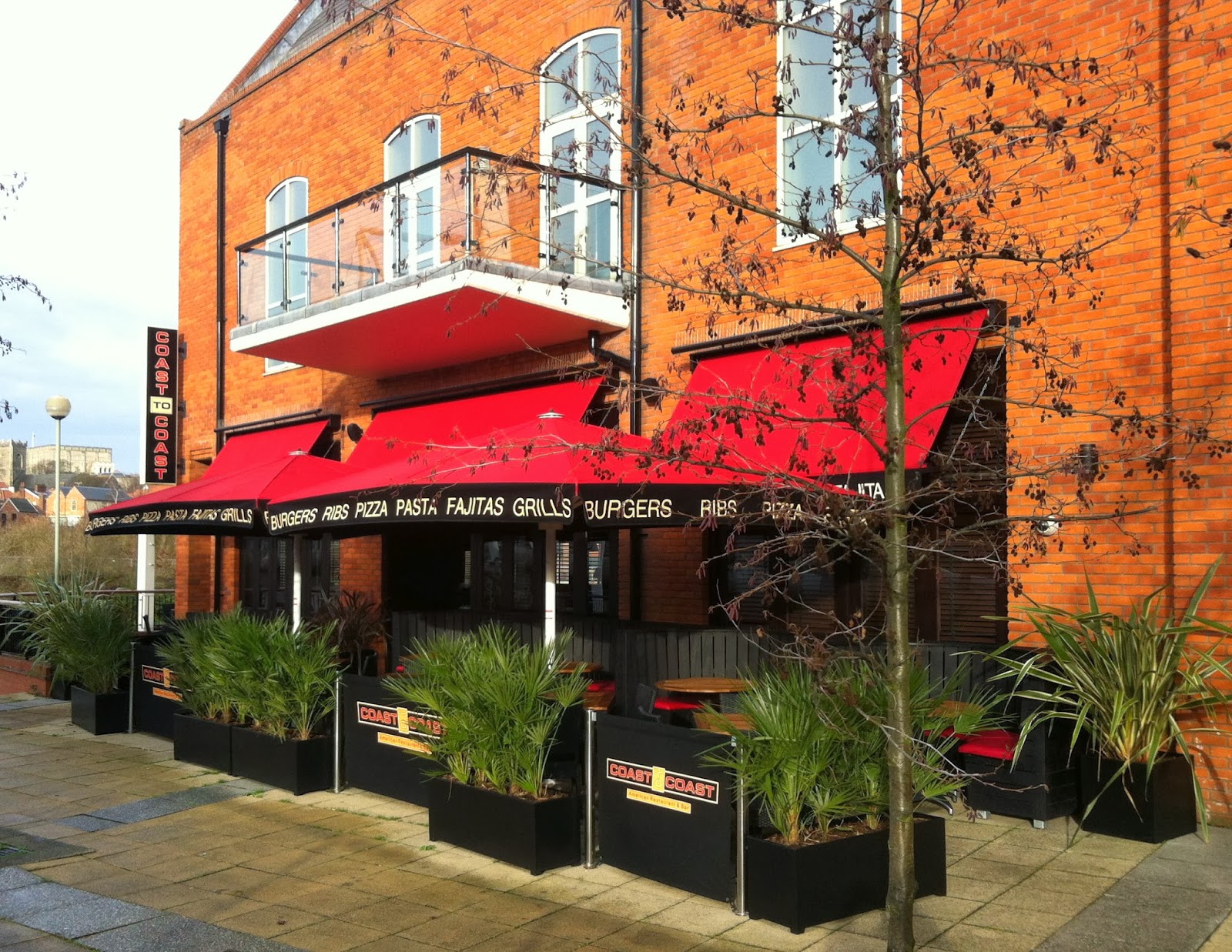 Coast to coast is located in the riverside complex of Norwich. 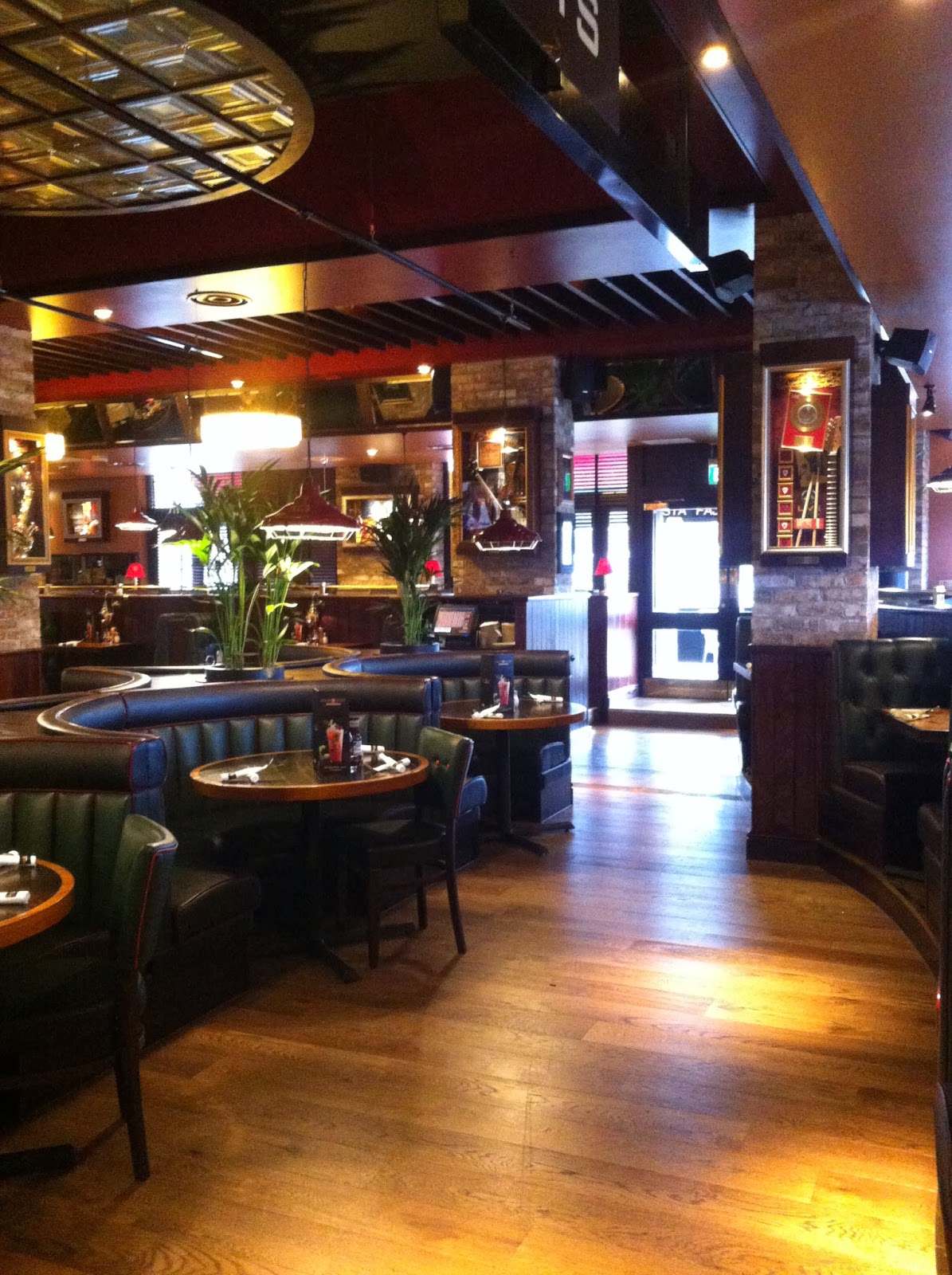 It's a huge restaurant with plenty of tables. 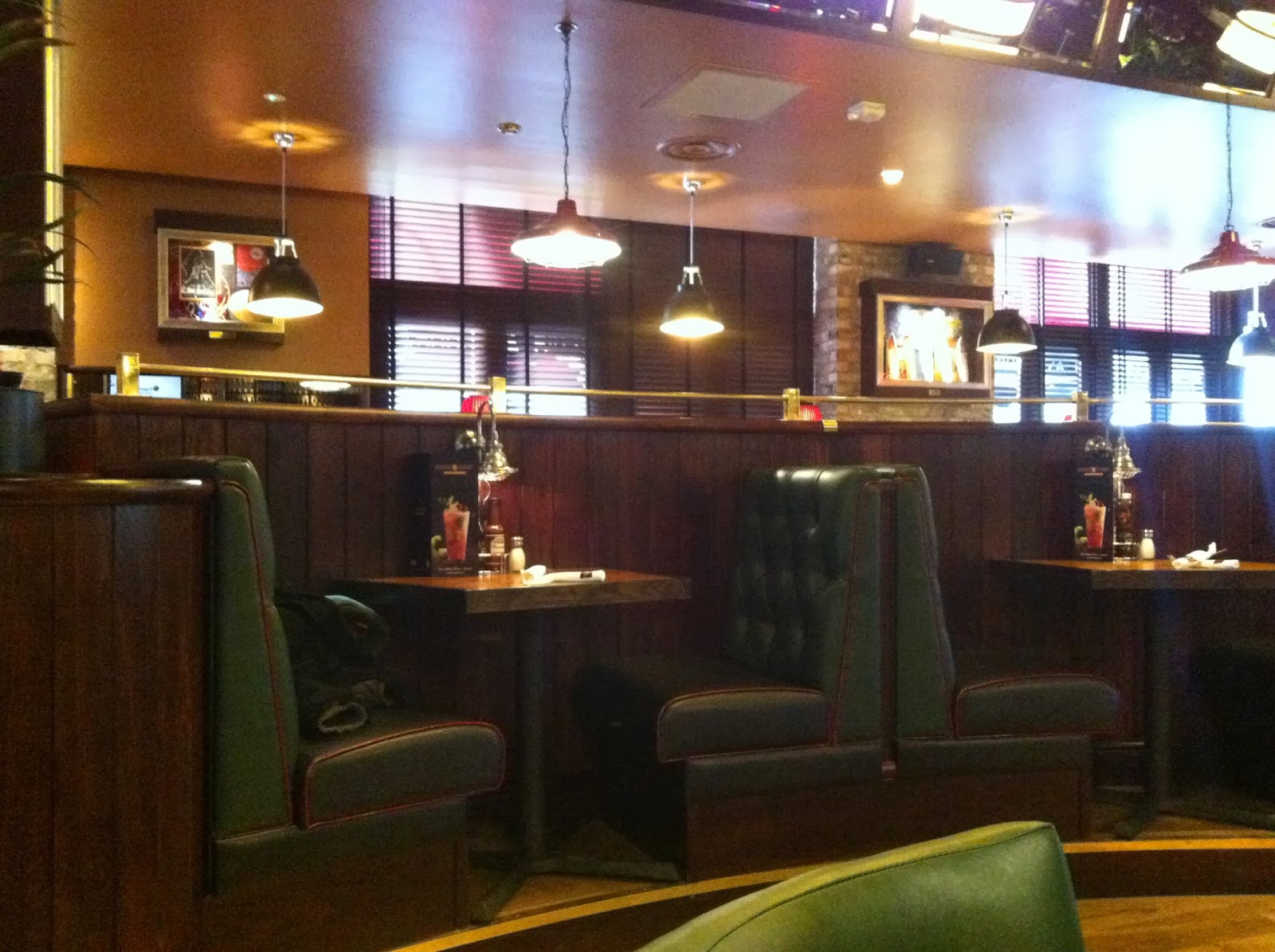 A cosy table for two. 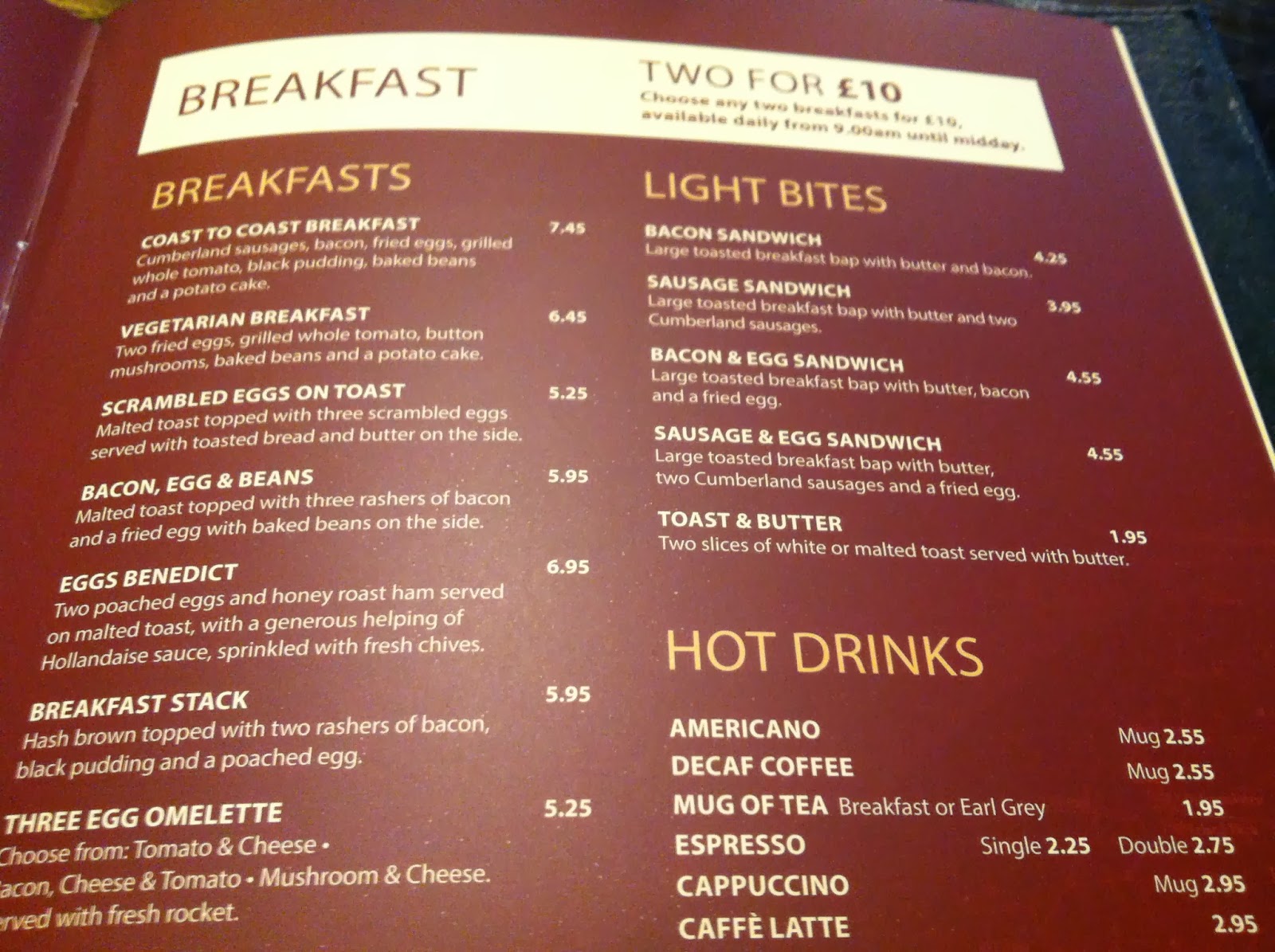 The "two for £10" offer makes breakfast much more affordable so bring a friend along.
The full breakfast menu can be viewed here. 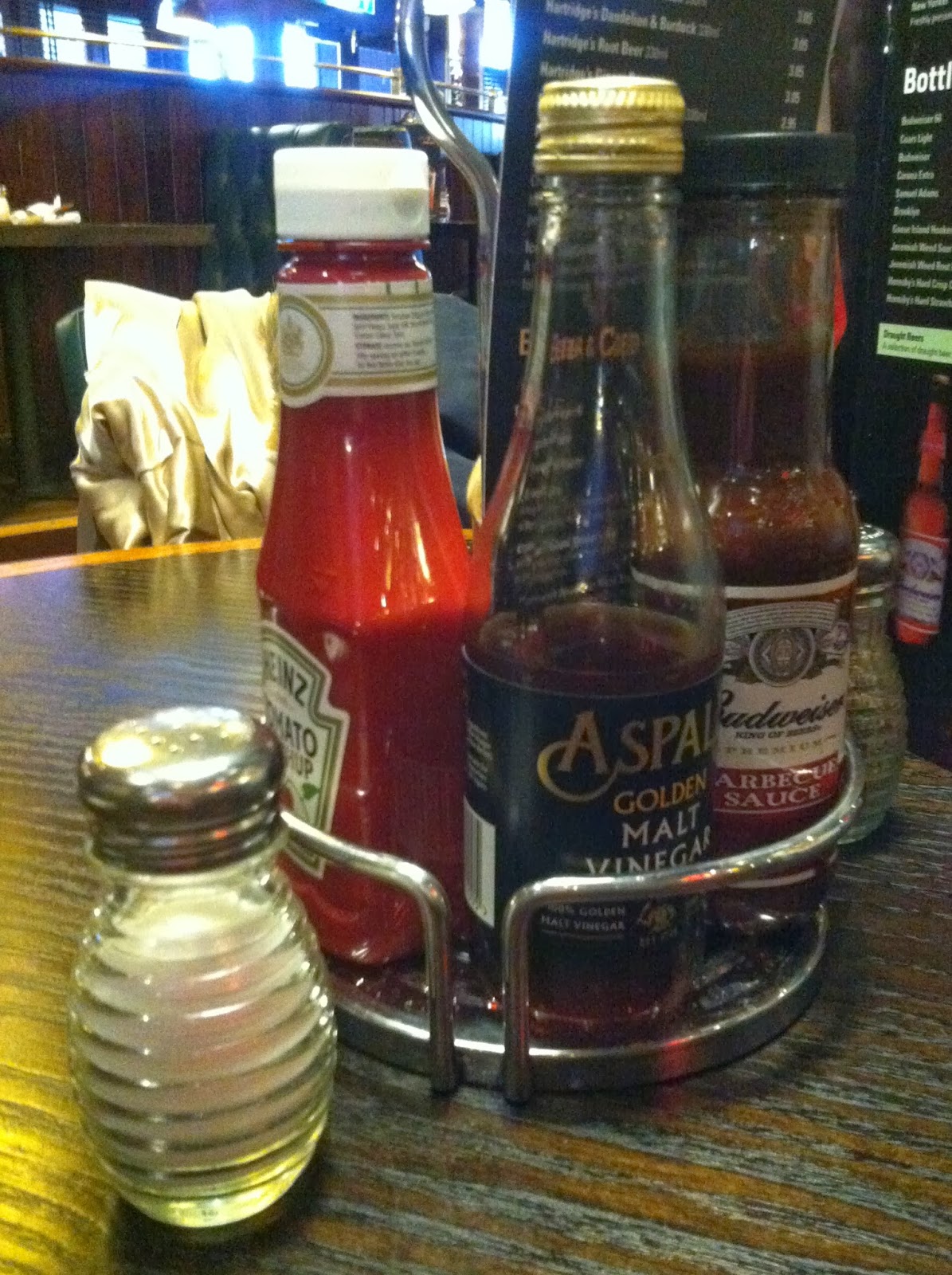 I really liked the Budweiser BBQ sauce, it went nicely with the bacon. 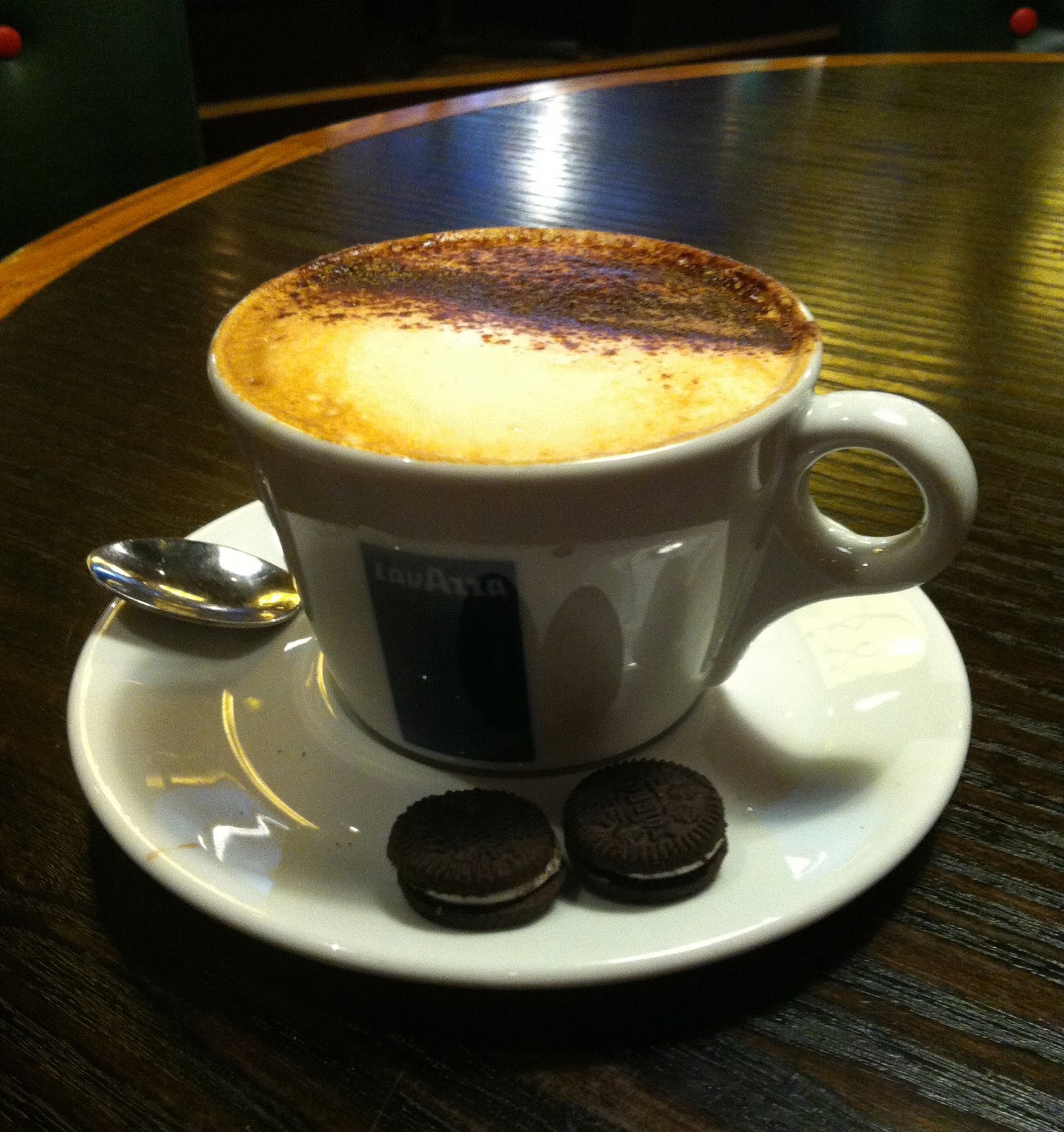 By the time the drinks arrived complete with mini oreos we were feeling we had stumbled across somewhere really special! 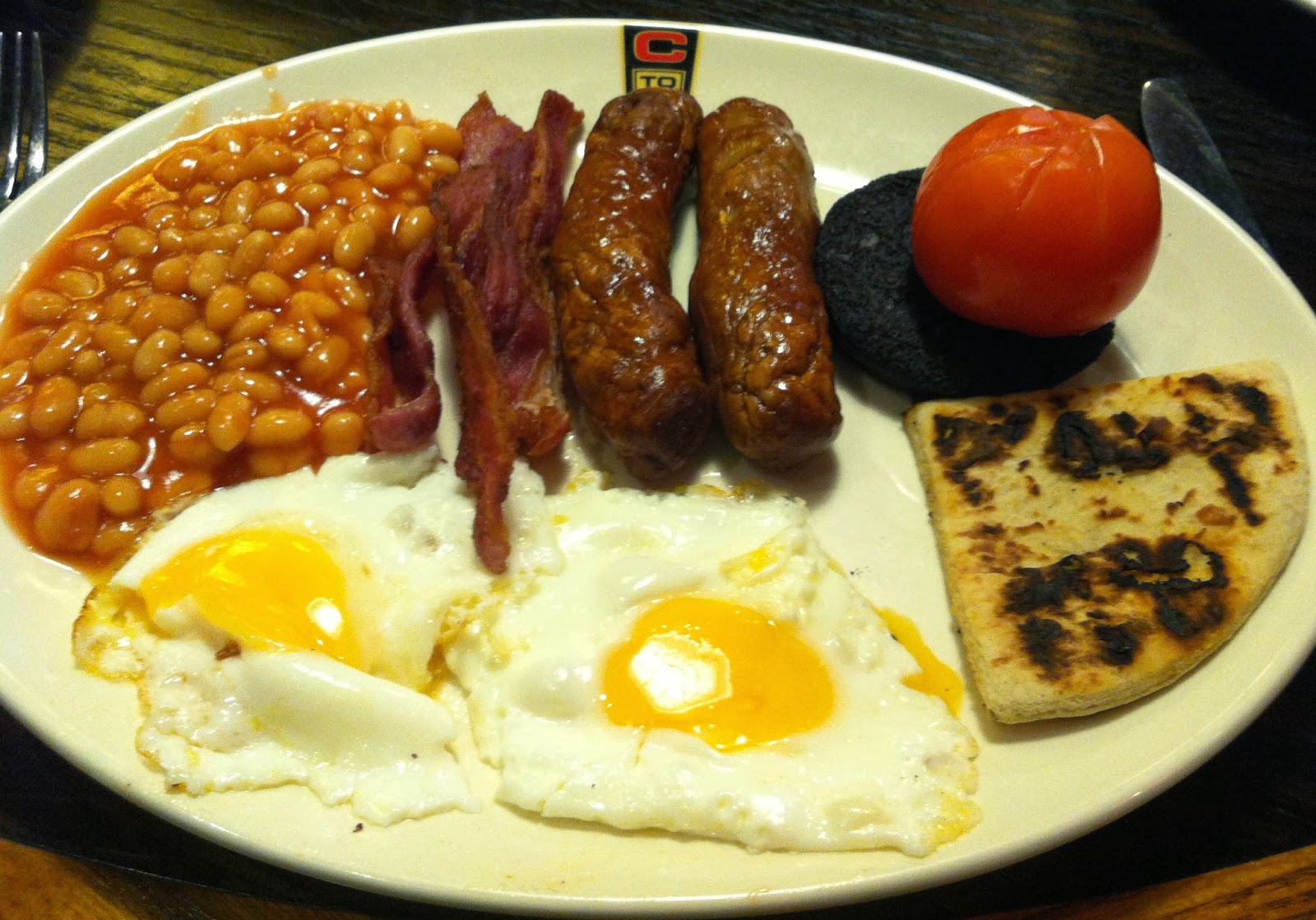 But then the food arrived..
The meat looked overcooked and the eggs and beans were cold. 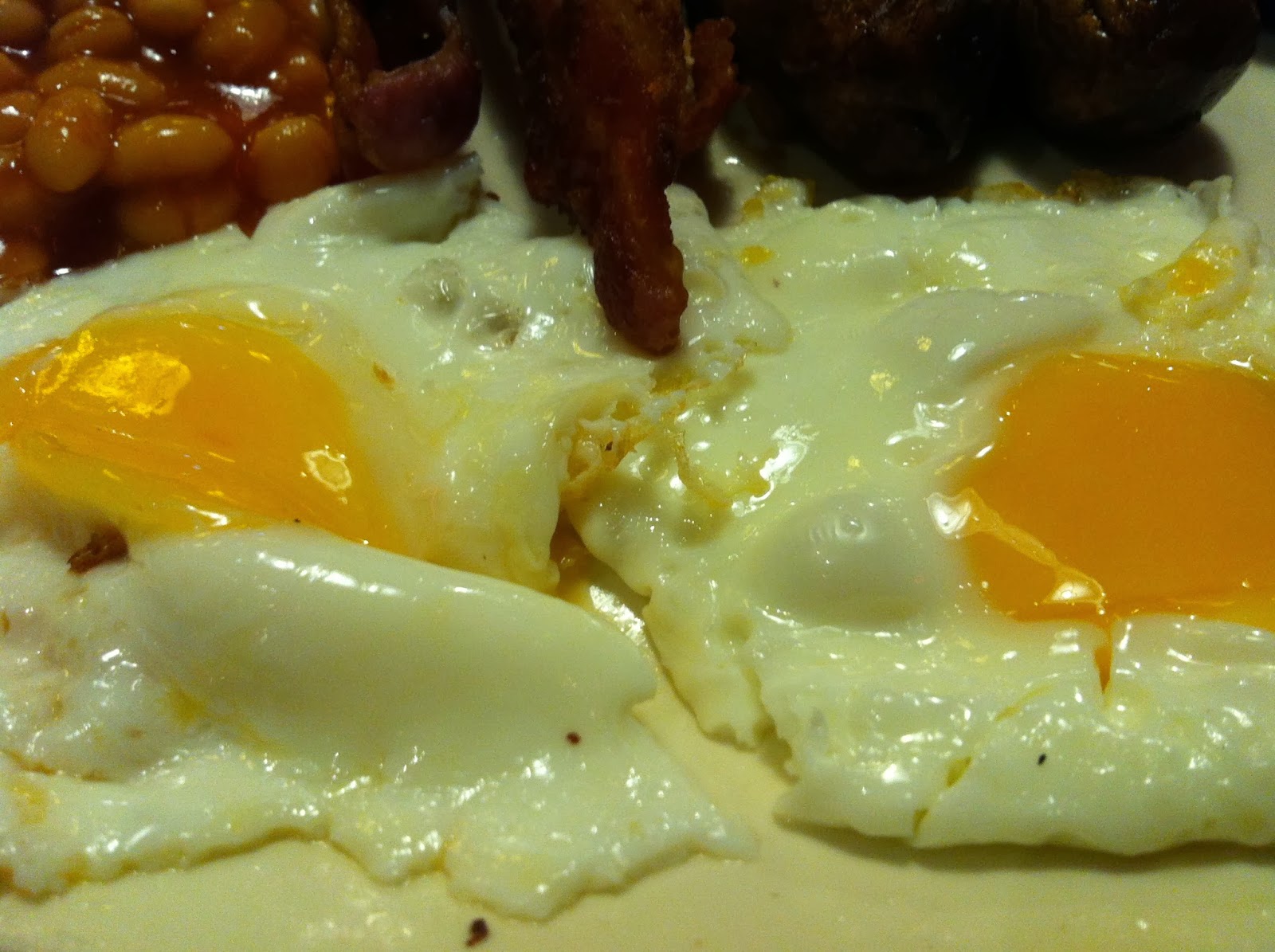 I had never seen fried eggs served this undercooked before. 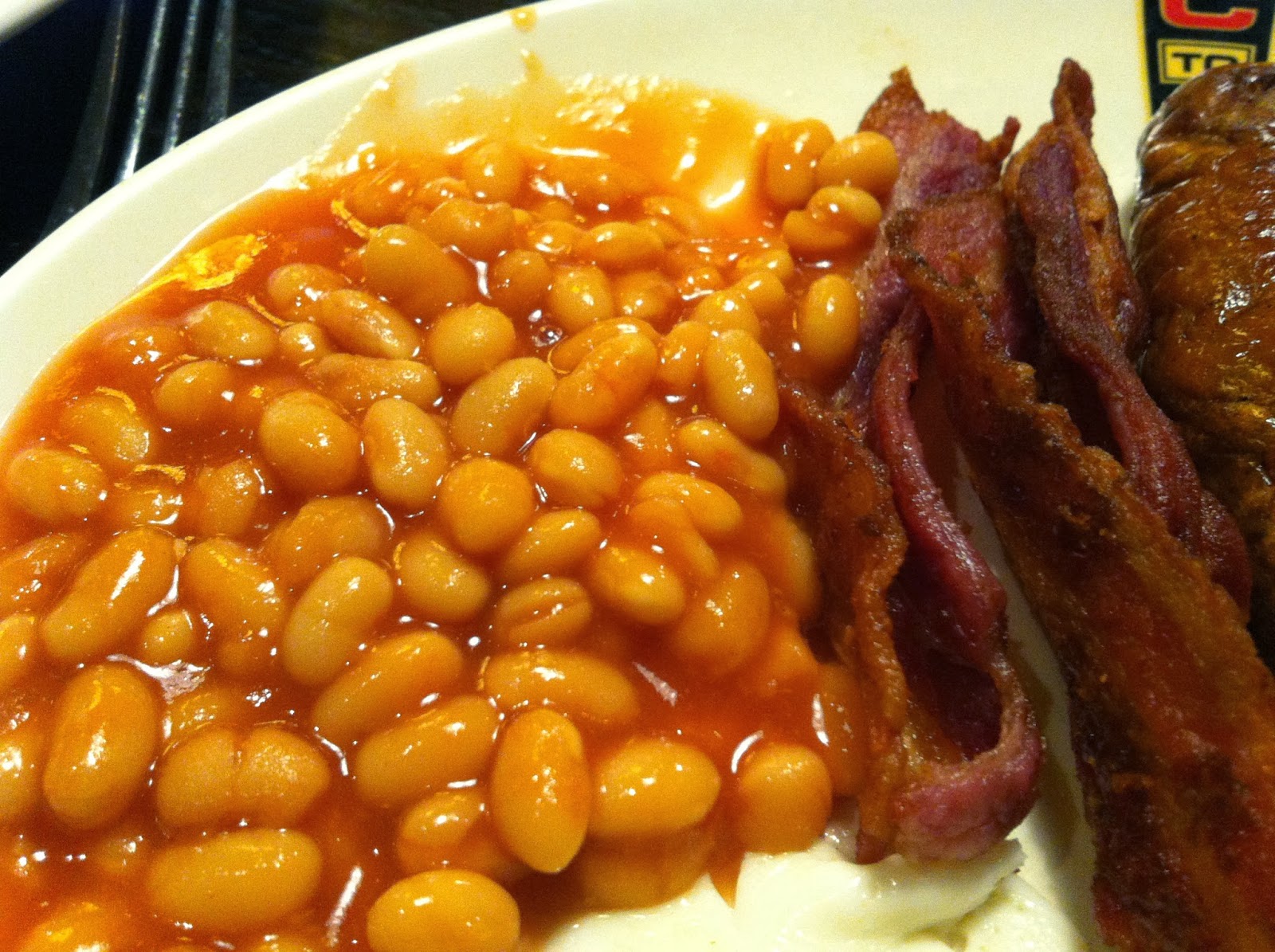 The cold beans and overcooked meats were most likely the result of a breakfast that had been left on the pass too long. We had waited over 30 minutes for the food to arrive and I suspect it hadn't been brought to the table soon enough after it had been cooked. 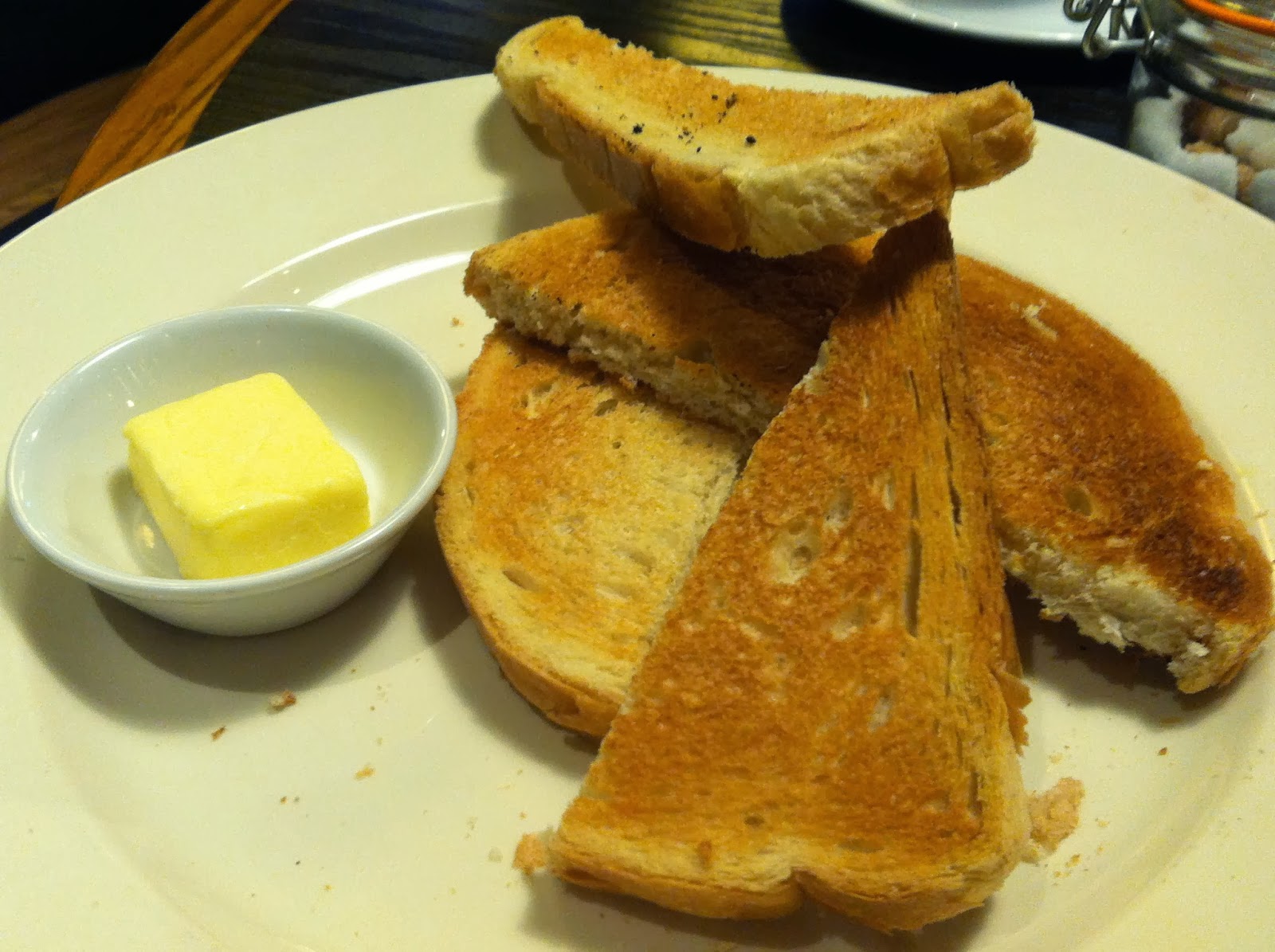 The toast had also gone cold and was really dry too. 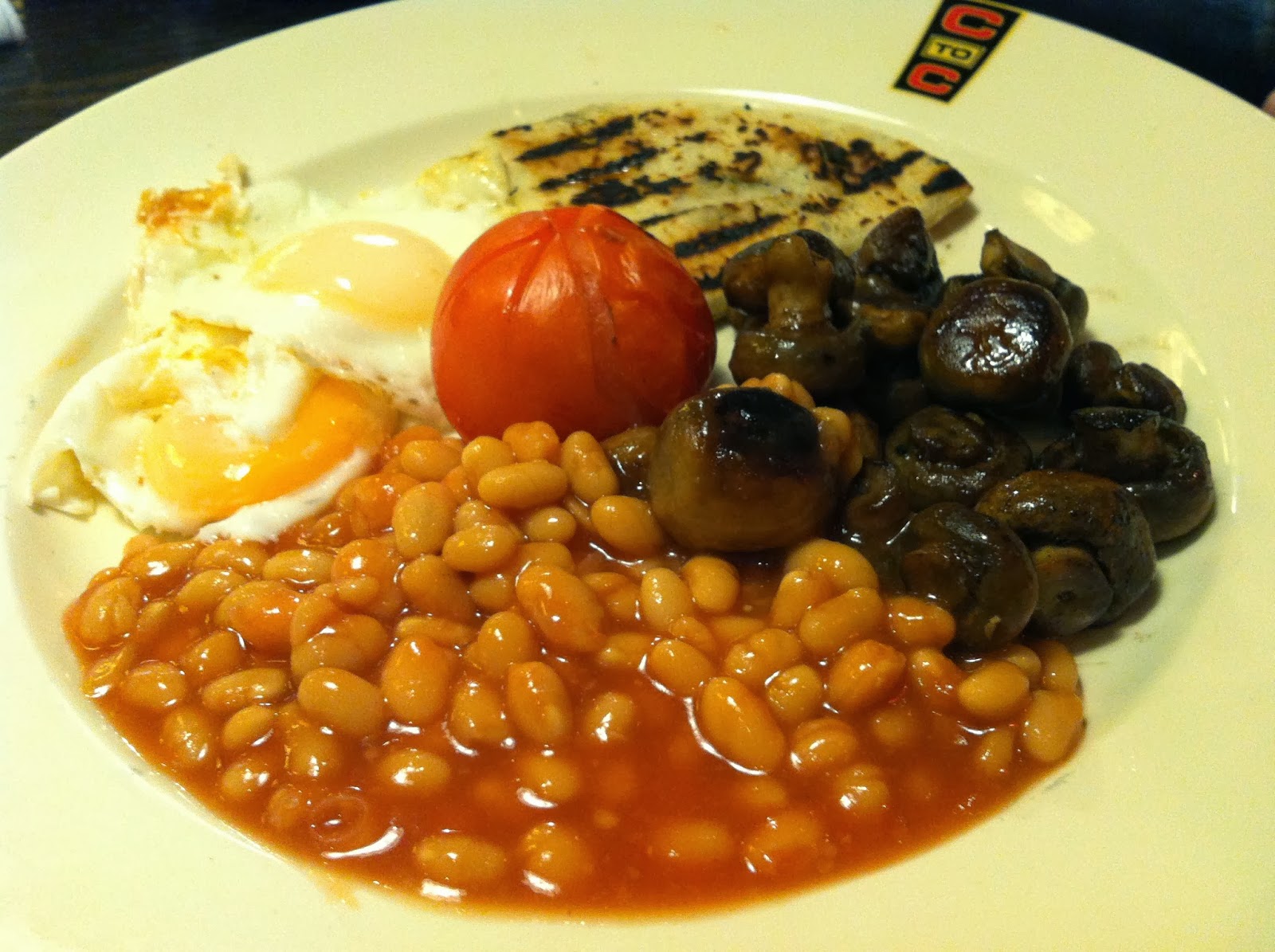 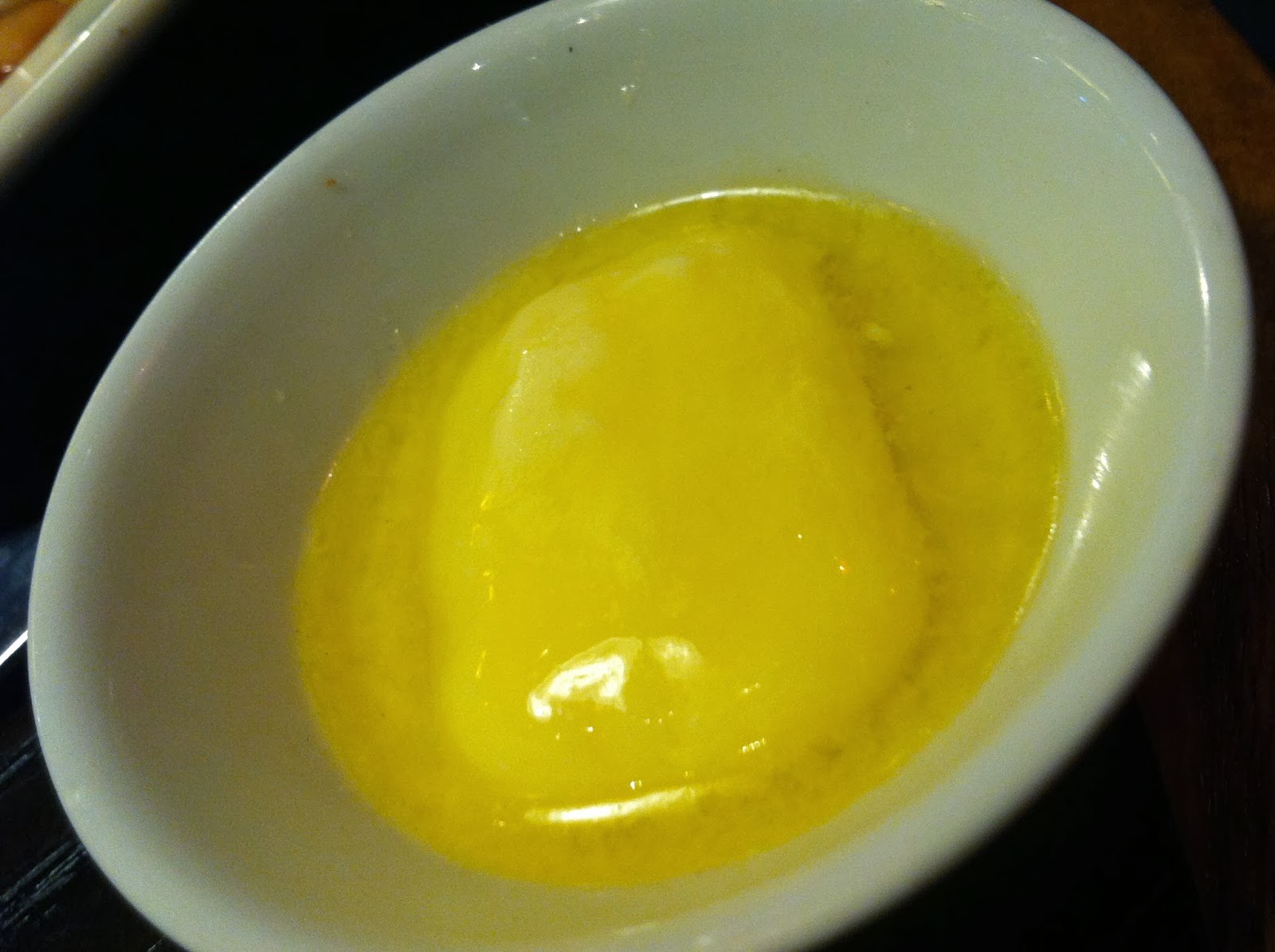 The butter served with my wife's toast had almost melted. We sent everything back, the manager however was very apologetic offering us free drinks whilst we waited for hot breakfasts to arrive. 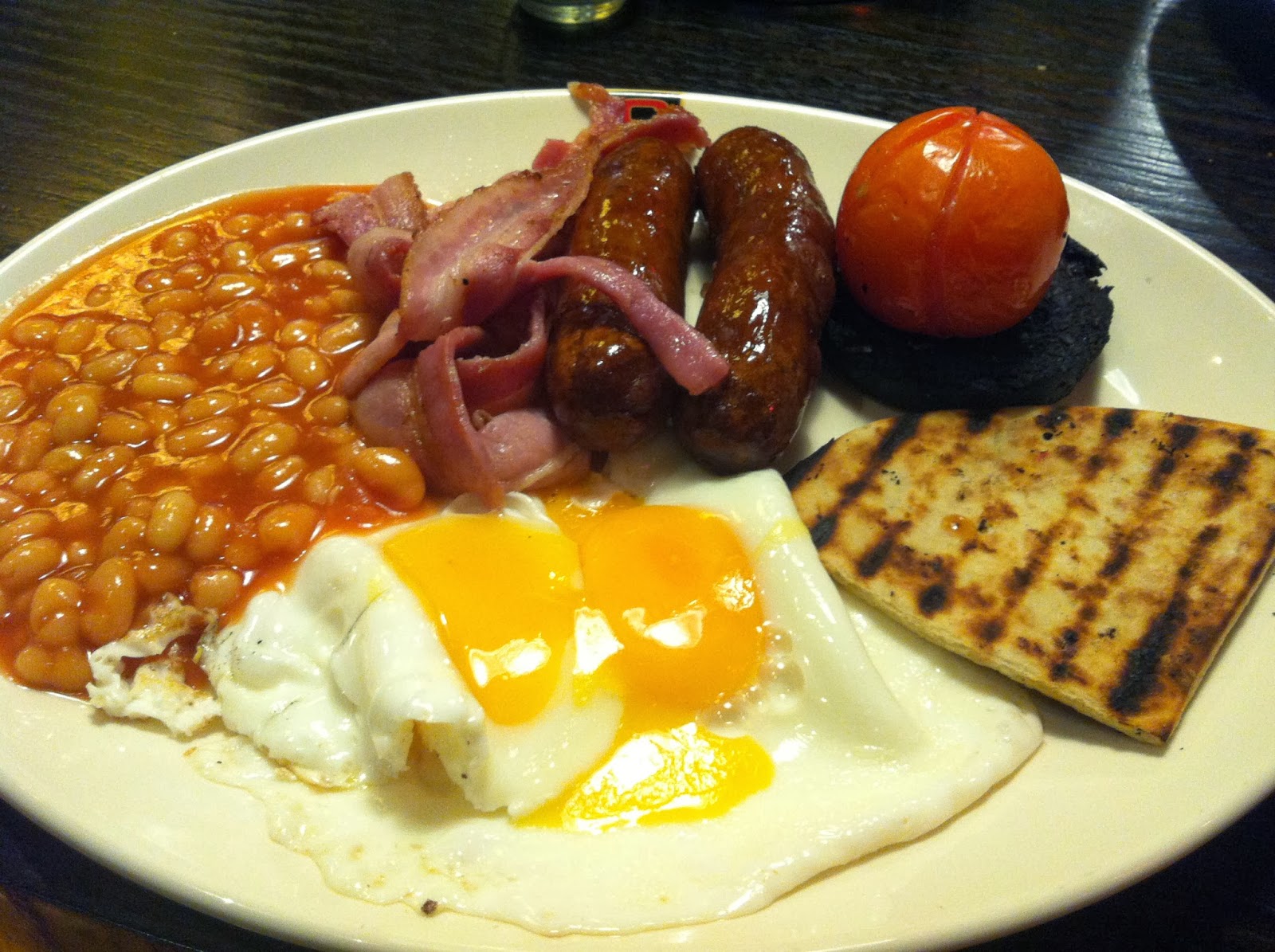 The second breakfast was piping hot but the sight of the eggs was still causing concern. 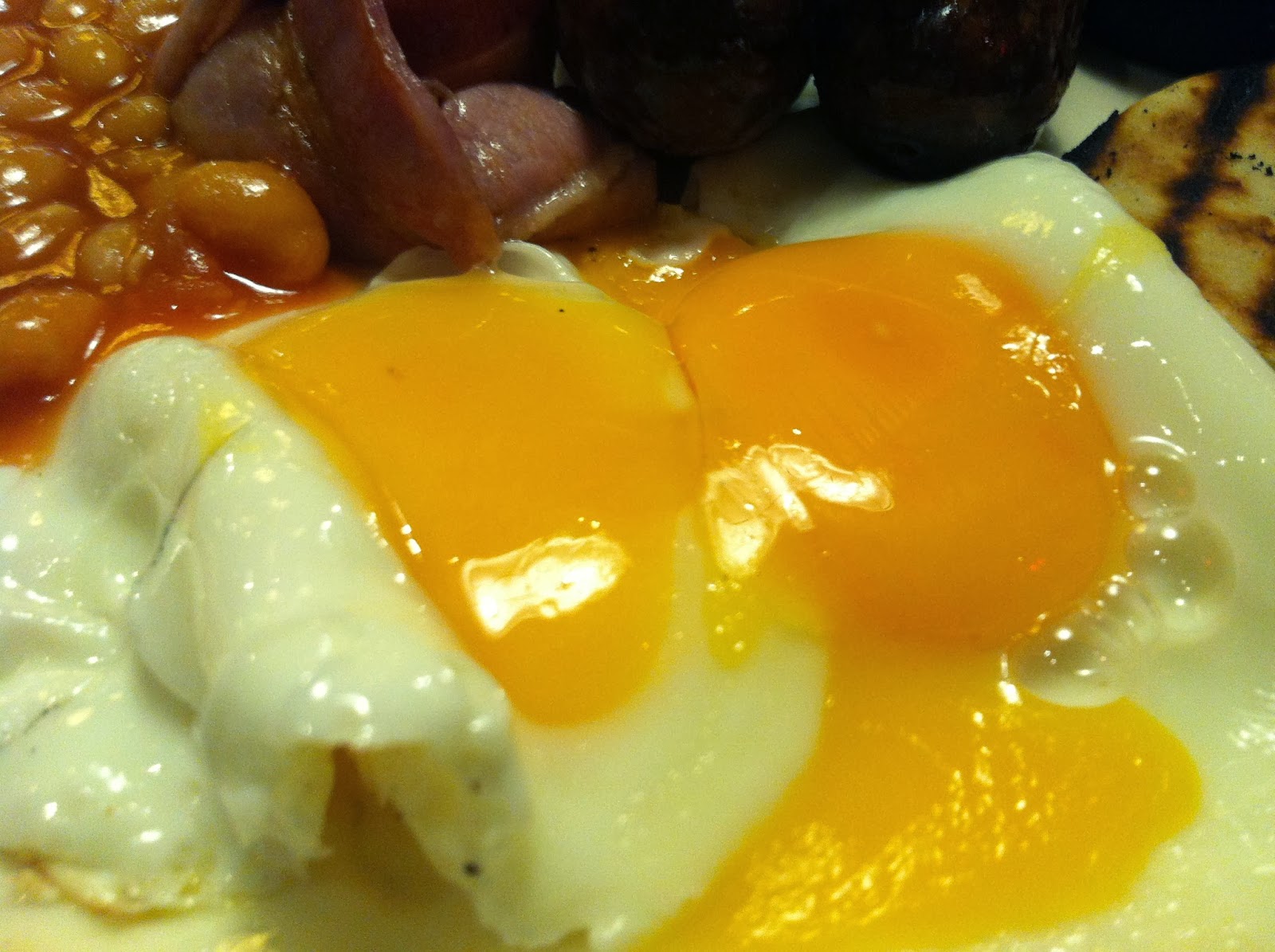 Surely nobody likes their eggs this undercooked? 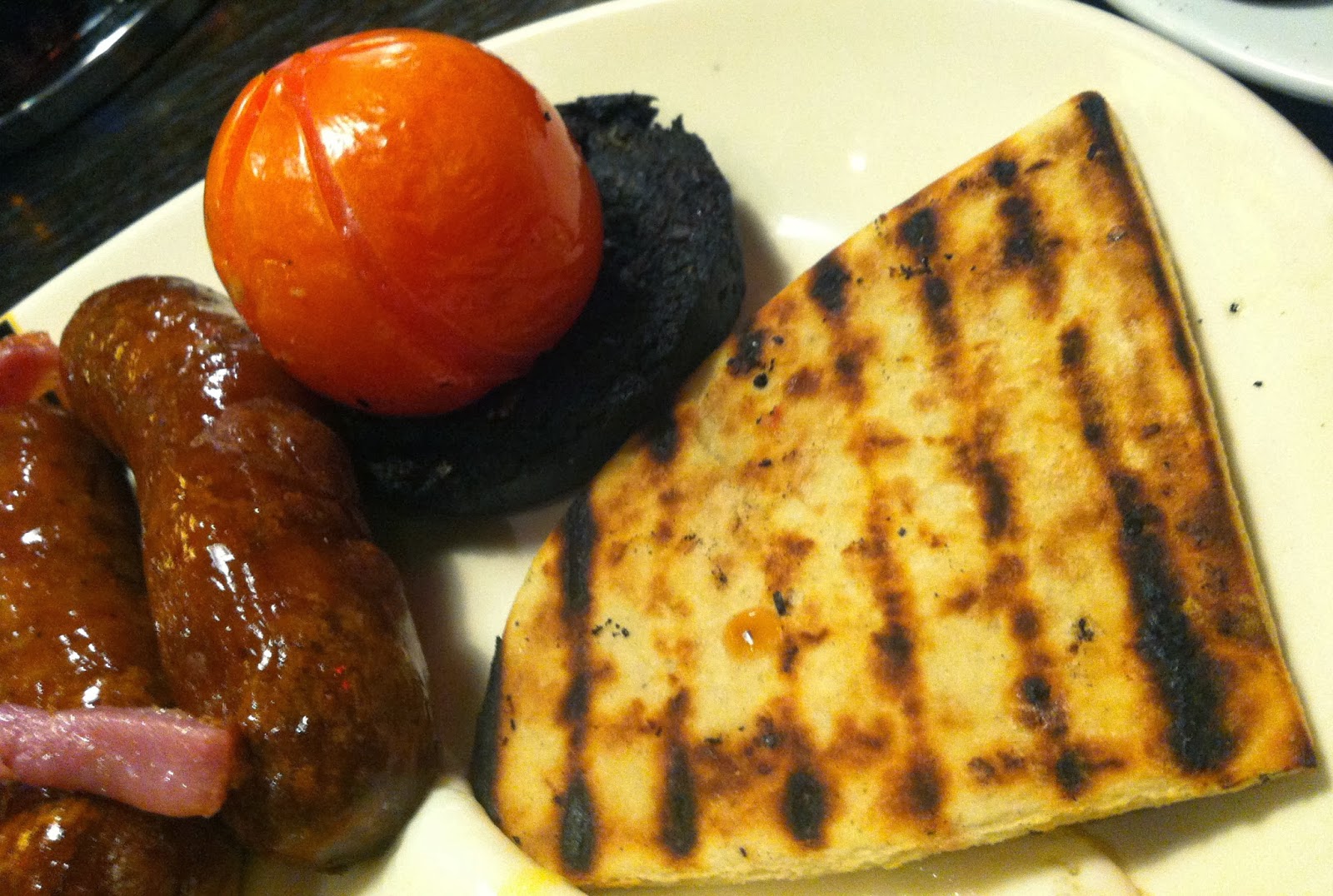 The potato cake was quite bland but went well with the beans. 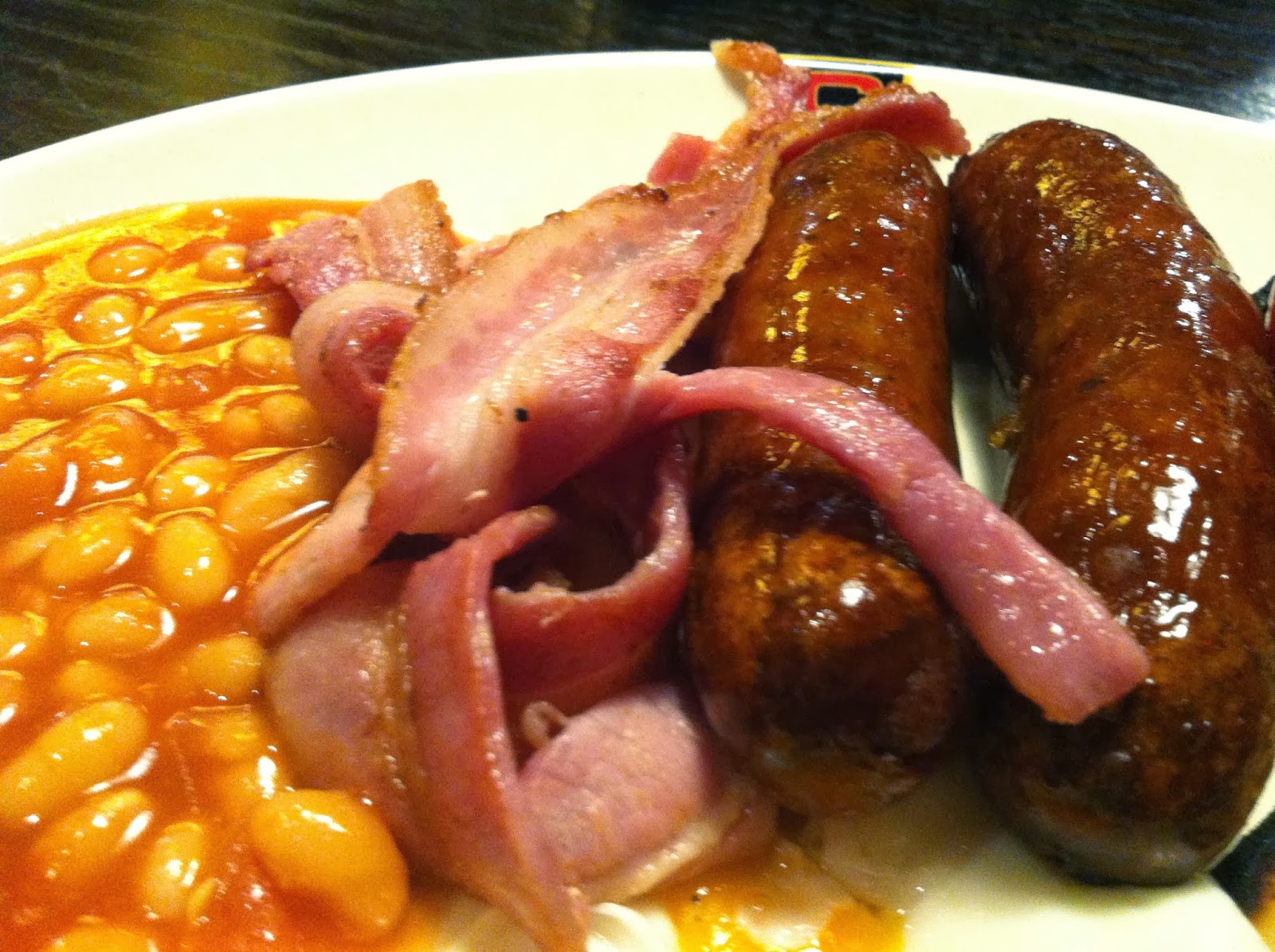 The bacon was much better this time and the sausage a better shape. 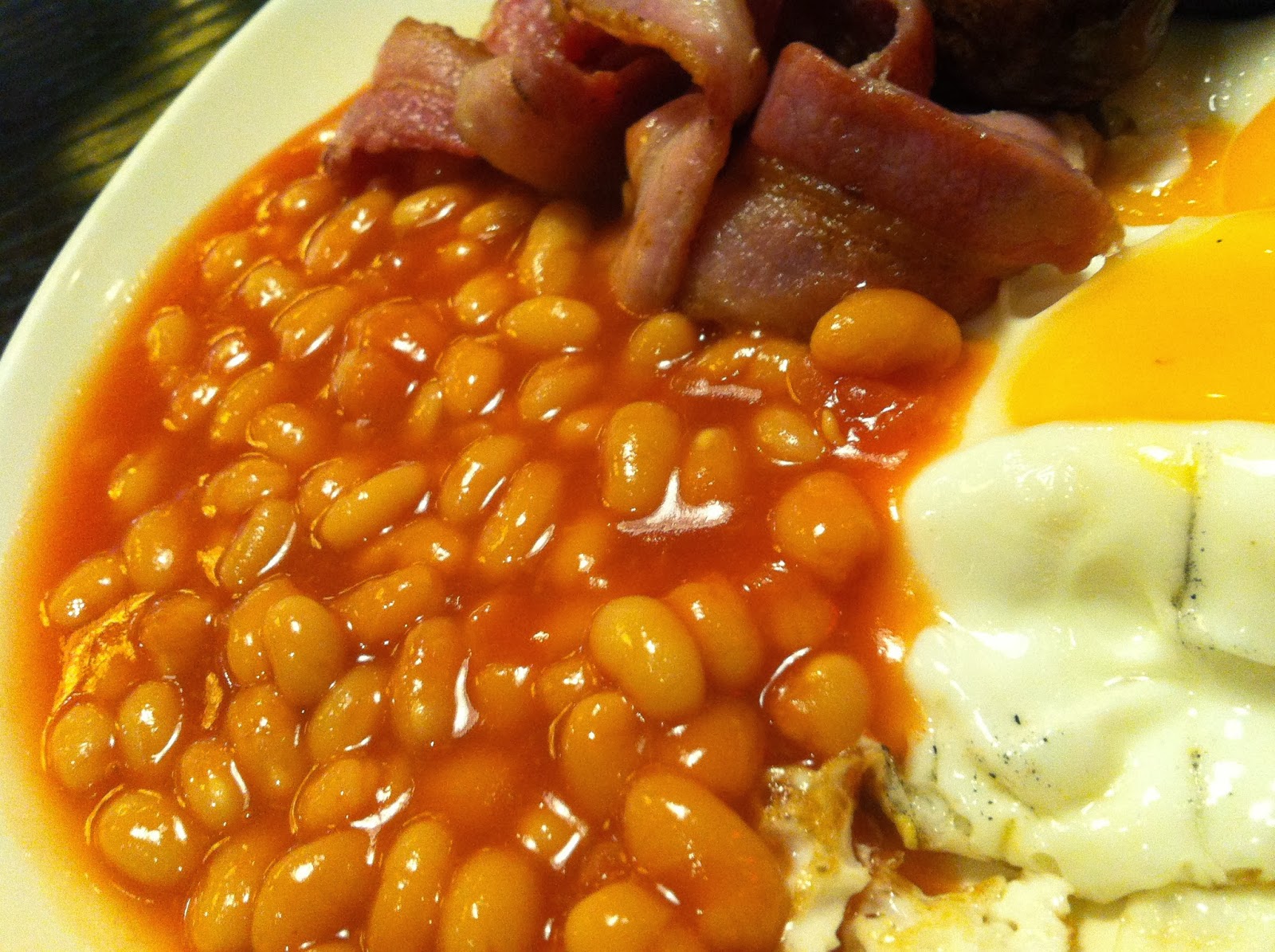 A nice hot sea of beans, shame about those eggs though.. 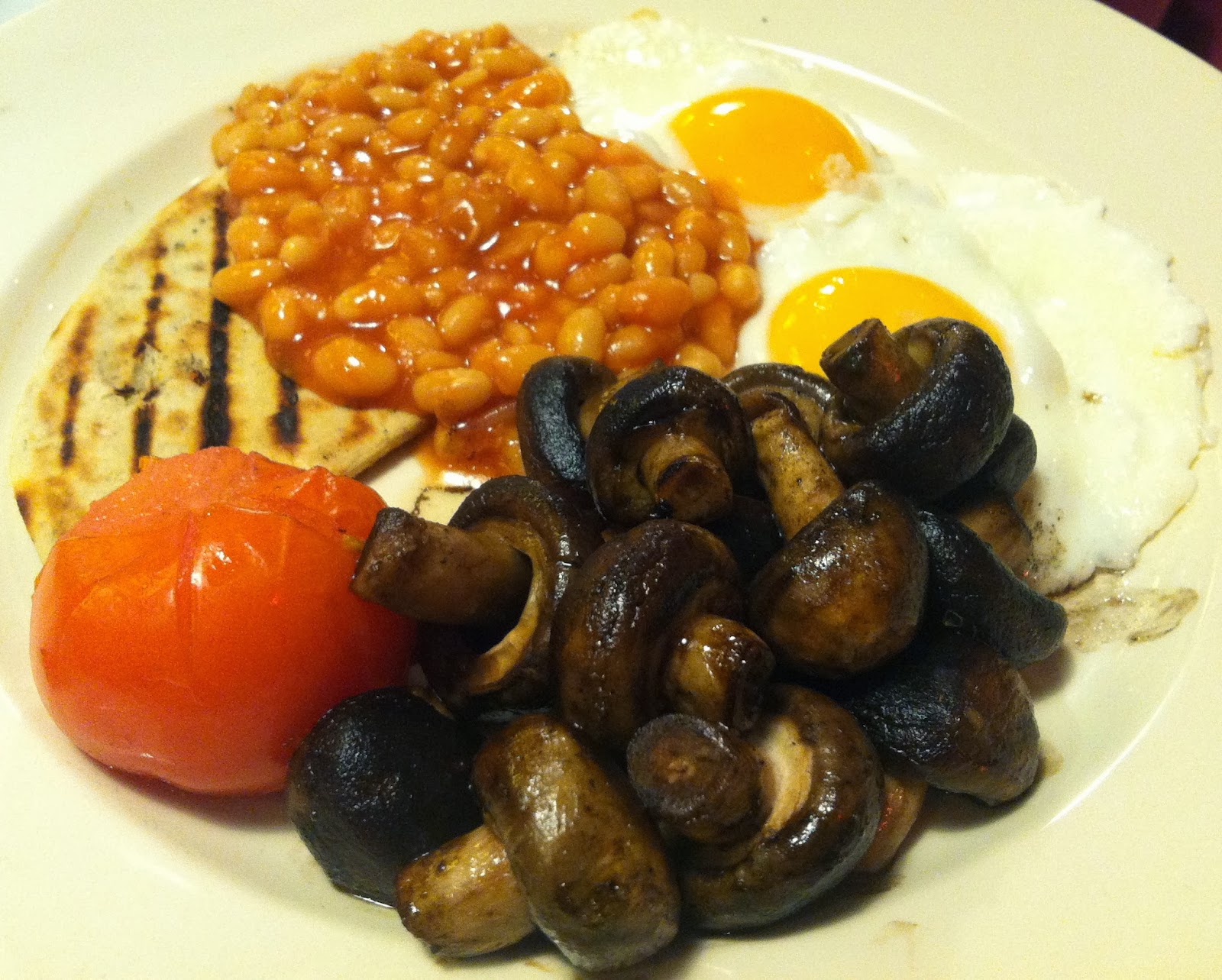 This is the veggie breakfast, no substitute for the meat items but at least it comes with mushrooms.

We had originally planned to try the breakfast at All Bar One near Tombland but upon discovering they were waiting for a sausage delivery we decided to leave it till another day. Suddenly I remembered Coast to coast at riverside, they were serving breakfast till midday so we headed there instead...

Upon entering - First impressions were good although fairly dark, inside the dining area was huge consisting of a selection of different sized tables to choose from. Most of the tables are booth style with a lamp overhead to give you just enough light. Towards the rear is a large open plan kitchen that looks out onto the dining area. Each table had an impressive sauce selection and beside them a stack of menus. It was a fairly nice environment to dine in with full table service. 7/10

Service - We were greeted as soon as we entered and shown to a table, the waitress told us her name and said she would be serving us today. First we were offered water and then our drinks order was taken followed by our food order, a very polished and professional service indeed! Our hot drinks arrived looking spectacular with mini oreos placed on the saucer, shortly after that the cutlery arrived wrapped in a serviette held tight with a coast to coast sticker. I was busy thinking how impressed I was with this restaurant chain when suddenly it occurred to us that we had finished our drinks a long time ago and a good 30 minutes had passed since ordering our food. This seemed a bit strange considering the restaurant was almost empty and there was plenty of chefs in the kitchen. Eventually I spotted the waitress coming over with our food, she then went back to fetch the toast saying "sorry for the delay, we were having a meeting". Whilst I was busy getting the food shot on my phone my wife announced "its all cold!" I then tried mine and realised it was also cold. We called the waitress over and explained the cold food situation, the manager then came straight over and was very apologetic saying he could offer us breakfasts cooked from scratch which we accepted, this arrived 10 minutes later. We were also offered fresh toast and another drink on the house. We felt well looked after in the situation and even more so at the end when we went to pay, we were just charged a total of £10 for nearly £25 worth of food and drink. The manager insisted that they usually do a very good breakfast and he hoped we would return. It was a real fiasco but thankfully we were not in a hurry, once the mistake had been made they seemed to do all they could to put things right. 9/10

Presentation - I found it difficult too see past the undercooked egg situation, this was a real shame as I could spot some nice happenings further back on the plate. The sausages and bacon seemed to be getting on very well almost cuddling each other, nice! The black pudding and tomato were clearly proud of their circular origins, one sat neatly on top of the other. There was a sea of beans to the left and a potato cake lay on the the right hand side of the plate. A nicely thought out display which nicely fried eggs would have fitted into very nicely, sadly the sorry looking eggs let the rest of the team down though.. 5/10

The food - The bacon was nicely cooked and tasted great with the Budweiser BBQ sauce. The lincolnshire sausages were nice enough but really not that special, they reminded me of the ones served in Wetherspoons. The black pudding was very soft and dry but tasted ok, the tomato didn't have much flavour but again was ok. The beans were piping hot but in quite a thin sauce, I ate them with the potato cake as it was far too bland on it's own. The fried eggs were a disaster, cooked underneath but way too undercooked on top, the slimy egg white got everywhere causing the enjoyment factor to descend rapidly. The second batch of toast which arrived was hot, evenly toasted and served with a generous amount of butter. 4/10

Overall - The first 20 minutes spent here left me impressed and feeling I had stumbled across the best restaurant chain so far. I was loving the great service, mini oreos served with a very tidy cappuccino and impressive sauce selection. It was beyond those 20 minutes when everything spiralled downhill, that said though I was really impressed with the way the manager responded and replaced everything that had arrived cold with hot food within 10 minutes. The bill being hugely reduced also showed how he wanted us to leave as happy customers and did help soften the blow for us. Based on the breakfast I eventually ate though I felt it had potential but was quite bland in places with a pair of eggs that were determined to spoil the party. Perhaps I just caught them on a bad day and a few people have said they have enjoyed breakfast at coast to coast. For me though it left very little impact other than to add a new feature to the blog where from now on I will time the space between the food being ordered and arriving at the table. 6/10