Breakfast served daily from 8am till midday The Glasshouse is a few minutes walk from Tombland in Norwich City Centre. 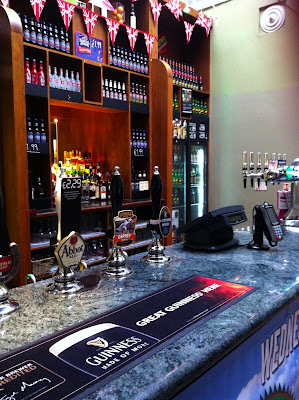 Place your order and pay at the bar. 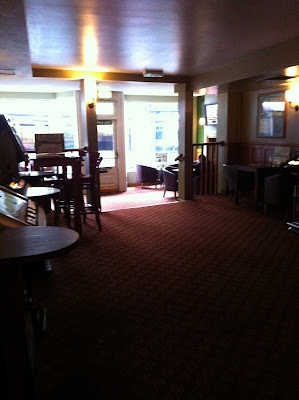 Inside is quite dark but there are seats by the windows. 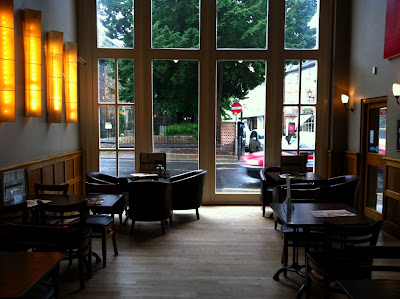 I wanted plenty of light for my photos so sat in this area. 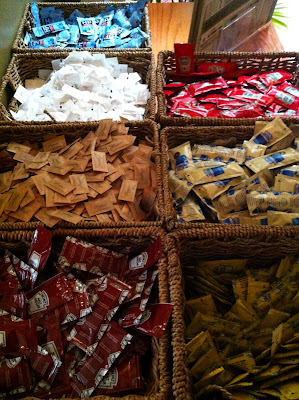 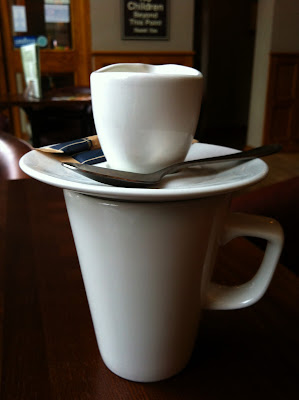 The coffee cost just £1.15 but wasn't very special and it felt like I was in an egg and spoon race getting it back to the table. 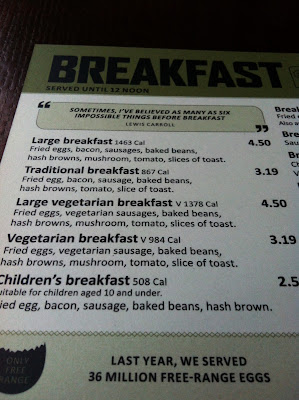 I have tried many Wetherspoons breakfasts over the years, some have been reasonable and others quite nice for the price. 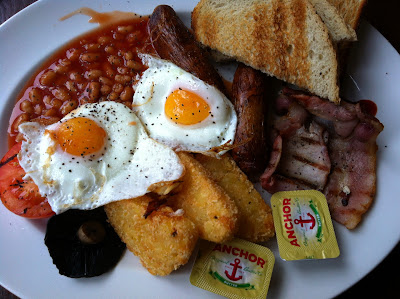 When it first arrived it looked ok but it rapidly went downhill as I sampled each item. 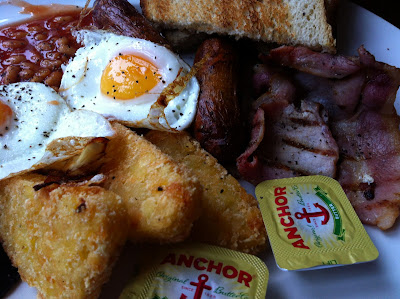 The hash browns were ok but the toast, sausages and dry bacon were not very hot at all. 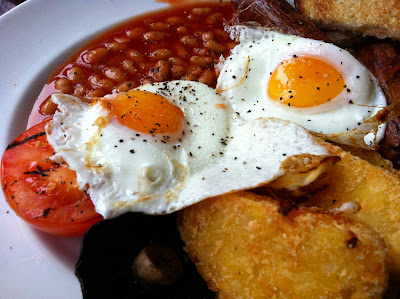 The tomato was stone cold with lines on top to give the impression it had been cooked and the raw egg on the yolks was hard to stomache.

I wasn't planning on a fry up inspection but had planned on reviewing the bacon sub and coffee for £2 at Subway . As soon as I discovered Subway on Magdalen Street was halal and didn't serve bacon a back up plan was needed. As I passed The Glasshouse on Wensum Street I decided it was time to review Wetherspoons again...

Upon entering - The Glasshouse is really big inside with a quite large seating area outside at the rear. It has the typical traditional/contemporary Wetherspoons decor and furnishings inside with some tables looking out on to Wensum Street. When I visited there was hardly anyone else there so I chose a table and placed my order at the bar (there is a menu on each table), paid and collected sauces on the way back to the table. When the food is ready it is bought to the table along with some cutlery. 7/10

Service - The person taking my order seemed friendly and cheerful, not long after placing my order she brought the food over to my table. 7/10

Presentation - It looked quite nicely presented on the large oval plate when it first arrived, a bit of bean juice had gone astray but there was nothing majorly wrong with how it looked. Then I spotted the egg yolks with a thick raw egg white glaze, not a good sight at all.. 4/10

The food - The first thing to mention was how nothing (except the hash browns) was particularly hot. The average customer would most likely return it at this point but I needed to eat what they were happy to serve and base my score on that. The sausages (lincolnshire I think) were ok but the bacon was dry and tough, I had a feeling it may have been sitting for sometime before being served. The hash browns were the highlight and did at least seem like they had just been cooked unlike the mushroom that had almost completely dried up with very little flavour. The tomato was a huge shock, completely cold and uncooked with black lines across it to fool you into thinking it had been cooked, nice on a salad maybe but not what you want on a cooked breakfast! I buttered the cold toast and placed some of the lukewarm beans on top, then I maneuvered the eggs on top of the toast watching the raw egg white spill off as they landed. I took a deep breath and started eating the eggs and beans on toast, each cold and slimy mouthful made me realise this was by far the worse Wetherspoons breakfast I have had so far.. 3/10

Value for money - The awful breakfast and fairly bland coffee cost £5.65 and felt like a complete waste of money. 3/10

Overall - A nice enough environment with friendly staff but it all goes down when the food arrives. To be fair I have had better Wetherspoons breakfasts than this one but they always seem to suffer from seeming like the food has been cooked and kept hot for sometime before being served. This is a shame because if everything was cooked nicely it would be a reasonable option for a place to go for breakfast but as it stands I would avoid and go elsewhere. 5/10