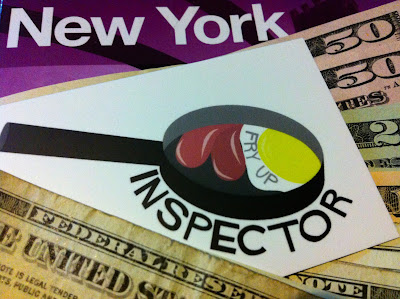 Back in 2009 I visited New York City with my wife and loved the place declaring it my favourite city ever visited. As a kid I had seen it on tv so many times and being there for the first time made me realise it is just like being on a film set where steam really does pour out the man hole covers, there really is a hot dog seller on most street corners and almost every other car is a yellow taxi cab.

I have wanted to return to New York City ever since and it was a money saving pot given to us on our wedding day and a conversation over a drink at the Playhouse in Norwich last July that made this return trip possible. My wife and I decided we would save either £20 or £40 a week in the money pot and by May 2013 we would have saved enough to return to New York City again, thankfully the only way into the money pot was to smash it open so we were able to save up £1000 quite easily. On our 2009 trip we saw most of the popular Manhattan sights and attractions and stayed in Long Island City. We didn't want an identical trip this time so decided to look at stuff we had missed last time, visit Coney Island and stay in Brooklyn.

Initially I had planned to search for full English breakfasts in New York but soon realised it would be a wasted opportunity and searching for classic New York food would be a much better idea. This is a story of places we visited and the food we discovered on the way, day one didn't really involve any New York food but its part of the trip so here goes.. 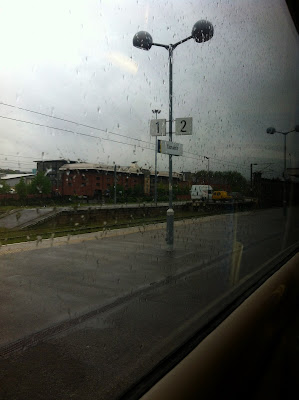 A wet Friday morning in coach H on the 9am Greater Anglia service to London, the trip to New York has finally started! 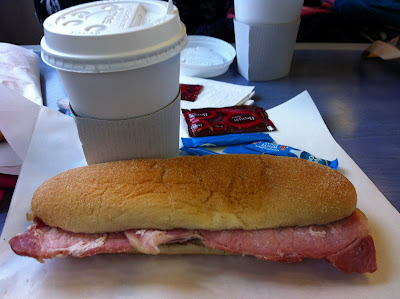 When in coach H it is difficult to resist the bacon roll and hot drink deal for £4.70, read more about it here. On the train I noticed on Twitter that both runways at Heathrow had been closed due to an emergency landing of a BA flight with an engine fire. I didn't mention this to my wife who is terrified of flying. 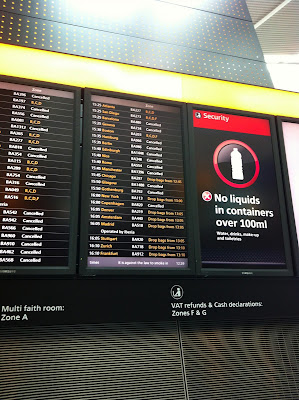 I ended up telling my wife on the tube to terminal 5 about the airport closure (I said a plane had had to return to collect suitcases left behind, she didn't believe me though so I had to tell her the truth!) and fearing the worst we headed to the departure board. All European flights had been cancelled but with one runway open again all long haul flights were still scheduled, so relieved!! 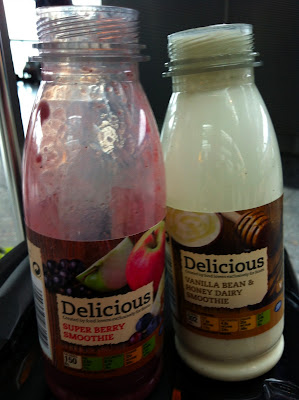 Whilst waiting to check our bags in we decided to be relatively healthy and drink a smoothy, I went for the vanilla bean & honey dairy, incredibly nice flavour with a thick creamy texture 9/10. Once through security we decided to eat and headed to Giraffe, they were serving all day breakfasts and we couldn't resist so let me talk you through it in the way I know best! 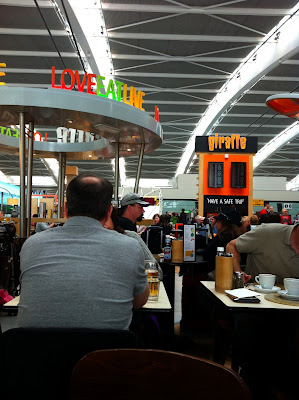 The seating area was huge and although quite chaotic still a pleasant enough place to dine. 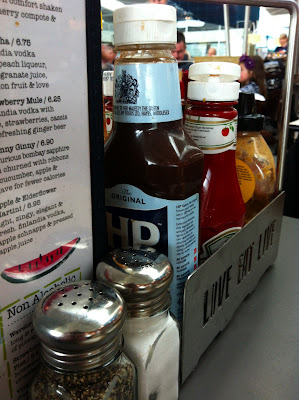 There was all the standard sauces and hot chilli sauce, tabasco and mustard. 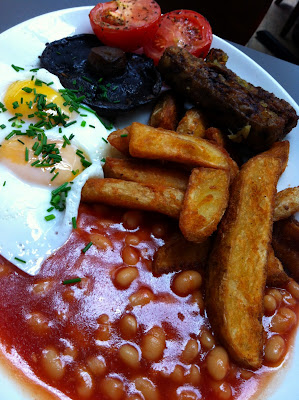 My wife chose the veggie breakfast plate special at £8.65. 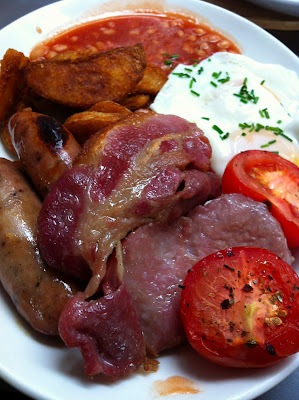 I went for the breakfast plate special at £9.75. 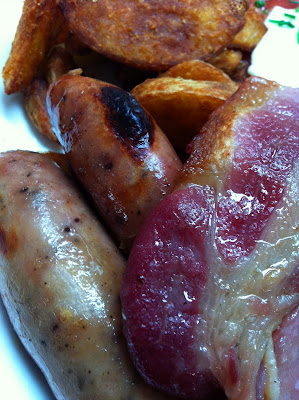 I am not usually a huge fan of potato wedges on breakfast but they did taste great as did the sausages and bacon despite its slightly undercooked appearance. 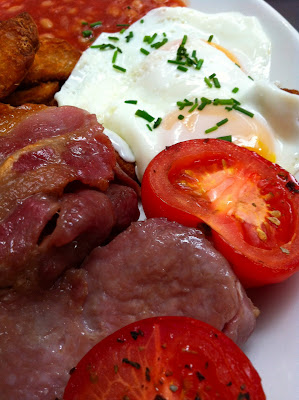 The eggs were perfect and the tomatoes tasted great.

Upon entering - This huge restaurant found on the first floor of terminal 5 departure lounge looks down onto the ground floor and has 3 huge giraffes towering high in the centre so is hard to miss. The tables have enough space for any hand luggage to be stored beside them and have a huge selection of sauces. As you enter you are shown to a table and presented with a menu, a full table service means you won't need to leave the table until the end. Although very busy and quite noisy it was a nice enough environment to sit down for a meal before your flight. 7/10

Service - They seem to want you in and out as quickly as possible and this is made very obvious, great if you are in a hurry but not so good if you are relaxing over a meal with time to spare. We were given menus straight away and within minutes our order was taken, the food and drinks arrived very quickly. During the meal a waiter placed some cutlery into the cutlery containers on our table twice, both times his arm was literally almost touching my face as he reached right across me! My wife was still eating her breakfast when I had finished mine and my plate was whipped away from me the second the cutlery had landed on the plate. Quick and efficient is ok but rushed and rude is not! 4/10

Presentation - It filled the large oval plate quite nicely and there was plenty of it, my first thought was that it looked like it had been sitting for some time, it was nice and hot though. The eggs looked very fresh with a green garnish finishing them off nicely. 7/10

The food - Despite looking a bit undercooked the sausages and bacon were both really tasty, the potato wedges were nicely crispy with a soft fluffy centre and a delicious seasoning. The Heinz beans were great, the slightly seasoned tomatoes full of flavour and the fried eggs perfect. 8/10

Value for money - I was at an expensive London airport eating a large plate of delicious food for less than £10, I was happy enough with the price! 7/10

Overall - This place served its purpose quite nicely and if you are in a hurry you will love the service, we were not in a hurry though and found the staff to be way too keen in clearing the table. The food was tasty and there was plenty on the plate for your money. A fairly good option if you want to squeeze one more full English in before heading abroad. 6.5/10 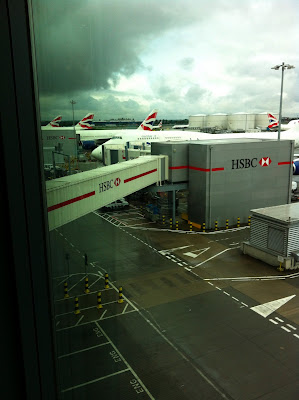 The flight ended up being slightly delayed but almost time to board, my thoughts now were on the onboard meal. 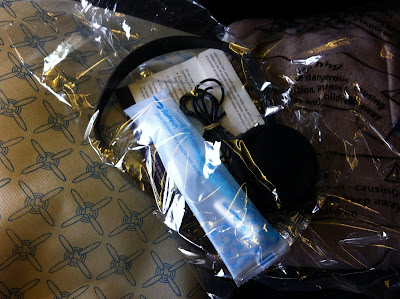 The economy class pillow, blanket and head phones were waiting on the seat. 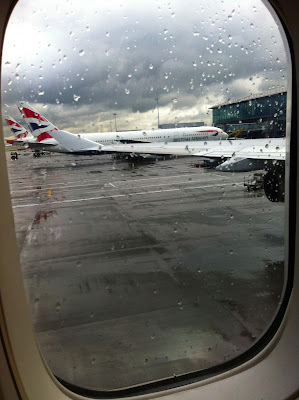 The rain was getting heavier when the plane started to taxi, this was our first time flying on a 747 jumbo jet, I was excited about the take off but my wife was terrified. 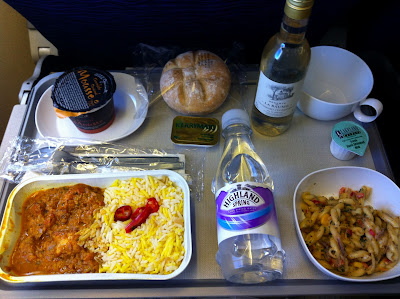 About an hour after take off the meal arrived: A very solid bread roll and a quite frothy spread, a reasonably nice cold pasta salad, the chicken tikka massala was pretty nice and the red chillis almost made my head explode! The real shock was the dessert, a chocolate mousse with caramel base that tasted bloody amazing. Everything was washed down with white wine, water and a cup of coffee 6/10 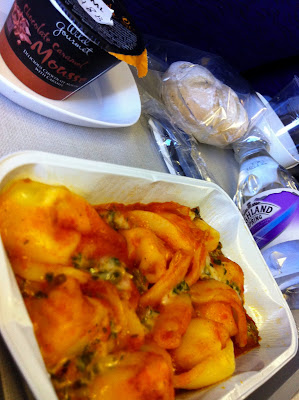 My wife chose the tortellini, quite a nice pasta dish. 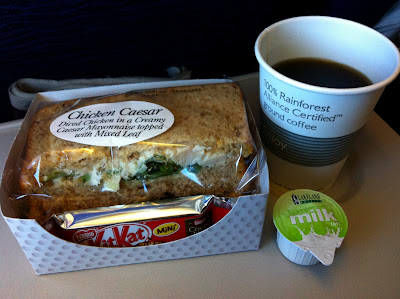 Throughout the flight drinks were served including alcohol if you wanted it. Before landing a fairly nice and well filled chicken caesar sandwich, mini kit kat and coffee was served 7/10 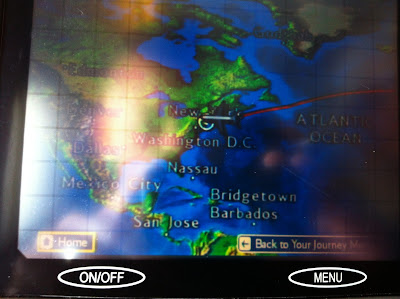 The touchscreen needed a lot of poking to get it to respond and despite a huge selection of films on offer I chose to watch the journey map screen for hours watching excitedly as we slowly got closer to New York. 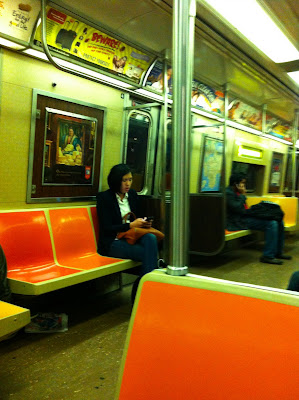 After a really long wait to get through customs we were finally on the Manhattan bound express A train. I love the New York subway with its wide rickety trains and "Please stand clear of the closing doors" message announced in a Buzz Lightyear voice at every stop. 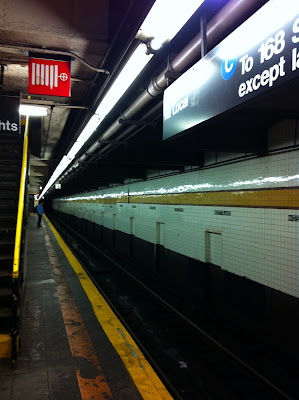 At Nostrand Avenue we changed trains and headed downstairs to catch the local train. This platform was really eerie and it felt like we were moments away from being mugged and it is so difficult to not look like a tourist with suitcases. 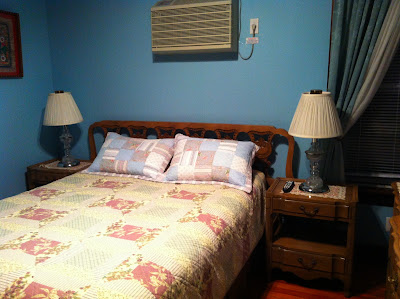 We were staying a Bibi's Garden B&B in Brooklyn, the area was lovely as was the house and we were happy with our room when we saw it. 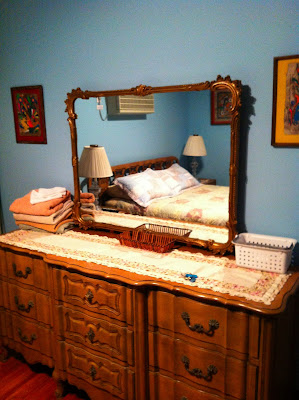 The real selling point of Bibi's Garden B&B was the friendly and helpful owners we had read about that run it. We had met Stephanie the daughter when we arrived who didn't seem particularly friendly and was keen for our payment to be made straight away. It was late though so in the morning we were looking forward to meeting Bibi who so many people had praised in reviews for her charm and friendliness.


Click here for..
Day 2 - A walk around Manhattan and Brooklyn
Posted by Fry Up Inspector at 17:49