Breakfast on a budget - Greggs vs Wetherspoons

Special Feature - Breakfast on a budget

Bacon roll & coffee for less than £3

Most weeks I pop into Greggs for a coffee and normally end up going for the bacon roll and coffee deal as the bacon roll ends up only costing around 60p when ordered with a coffee. I have also in the past bought a similar deal at Wetherspoons which costs slightly less so I decided to compare them both to find out which place is offering the better deal. 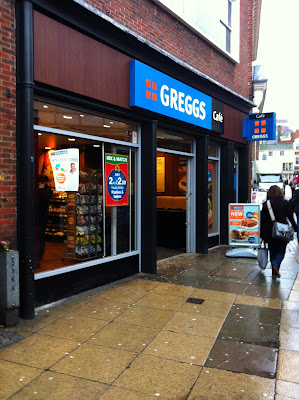 I had recently tried the dreadful cooked breakfast here but had always found the bacon rolls to be much better, rather nice infact. 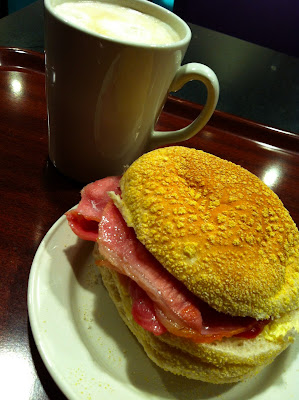 A large fresh roll and 3 slices of bacon. 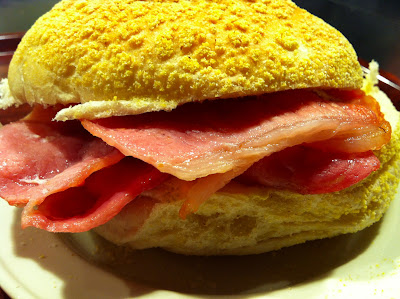 Butter and sauce is added to the roll if you require it.

With Greggs the trick is to arrive mid morning or you can end up queuing for ages, even mid morning can still be quite busy but this ensures the bacon is not long out the oven as the roll and coffee deal is really popular. Place your order at the till, butter and sauces are offered and the roll is made up and given to you at the counter (sometimes if the bacon is not ready it will be brought over to your table when it is ready), pay and then find somewhere to sit.

The deal - Any regular hot drink or orange juice and a sausage or bacon roll for £2.60 (£2 take away) served before 11am.

The drink - Served in a tall mug is a reasonably nice Latte, it was still nice and hot when I sat down to drink it.

The roll - A really fresh and enjoyable soft white bap buttered both sides.

The bacon - 3 slices and nothing really special but served hot and with a pleasent enough texture and taste.

The sauce - Heinz ketchup generously applied by the staff.

Overall - A large fresh roll with plenty of bacon and just the right amount of sauce served with a fairly nice latte for £2.60 (less if you take it away) is the reason I keep returning week after week. 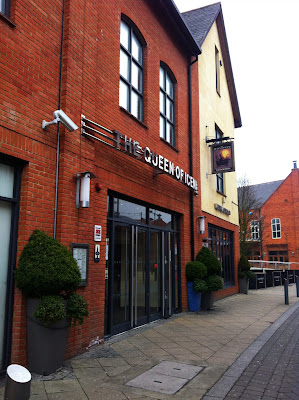 I don't visit here very often anymore and would only ever pop in during the daytime. 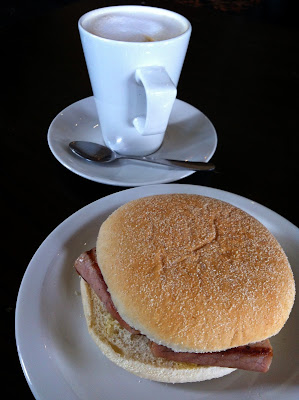 The coffee was not quite as nice and the bun looked very dry. 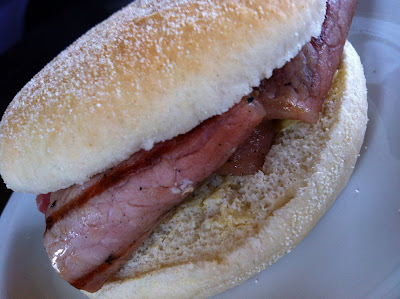 When buying a hot drink in Wetherspoons it is equally tempting to pay an extra 60p (approx) to get a bacon roll. Place your order and pay at the bar, give them a table number and the roll will be brought over when it is ready (usually about 5 minutes) collect any sachets of sauce you require before sitting down.

The deal - Choose a large coffee or orange juice with a sausage, vegetarian sausage, fried egg or bacon roll for £1.49 before midday. (with a small drink £1.19)

The drink - Fairly nice coffee but not particularly hot by the time I had collected sauces and sat down.

The roll - A really dry burger bun that was buttered a little on the bottom but not at all on the top.

The bacon - 2 slices of quite tough bacon that had been sitting far too long before being served.

The sauces - Heinz ketchup which although in a sachet meant you could put on as much as you wanted also meant that by faffing around putting it on yourself ensured any heat in the bacon was lost.

Overall - A dry roll and tough bacon served with a not very hot coffee will ensure I return to Greggs next time. To be fair I have had better bacon rolls in Wetherspoons but never as nice as what Greggs are offering.

Conclusion - The cost of the deal is cheaper at Wetherspoons (although you need to order the large drink for it to compare against Greggs regular sized drink) and they offer more roll options but with Greggs offering fresh rolls cooked on site and more substantial fillings you are getting a much better roll at Greggs. The coffee at both places were fairly nice but seemed much hotter at Greggs.