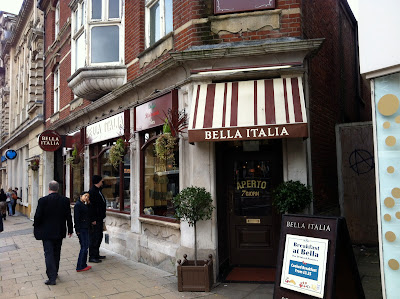 There are three to choose from in Norwich, I chose the one on Red Lion Street. 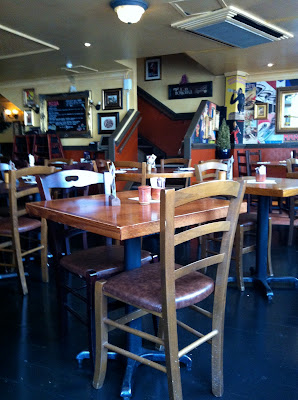 There is a large open dining area with plenty of tables. 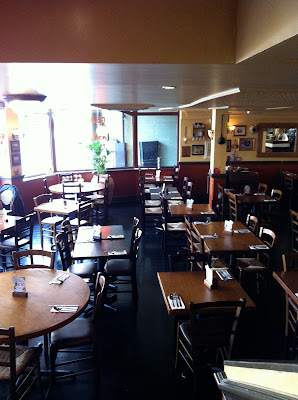 I could have sat anywhere as the place was almost empty. 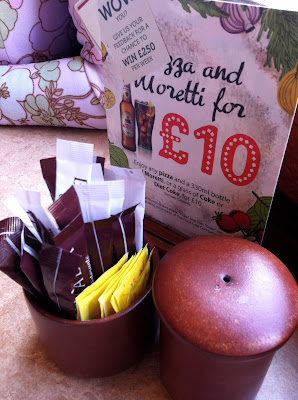 Salt and sugar were on each table but pepper was put on by the waitress, this niggles me slightly though, I want to put my own pepper on my food! 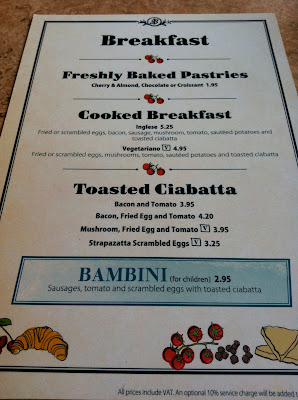 Not the most varied breakfast menu I have seen and the vegetarian option is not very imaginative! 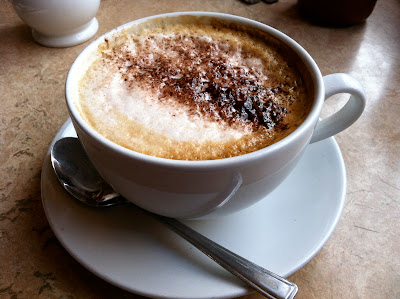 The Cappuccino cost  £2.25 and was really nice. Be sure to save some for after you have eaten your breakfast, you will be needing it! 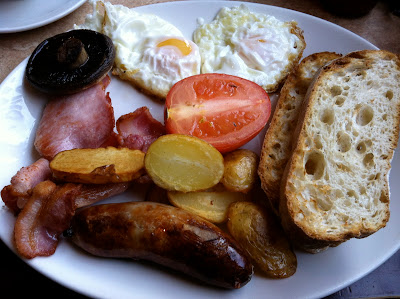 The Inglese breakfast cost £5.25 and was not so nice and the driest breakfast I have eaten so far. 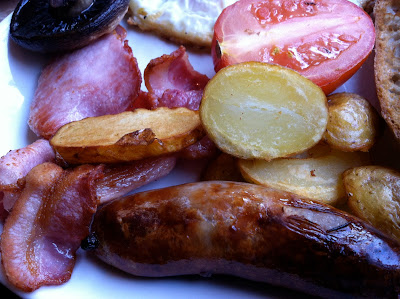 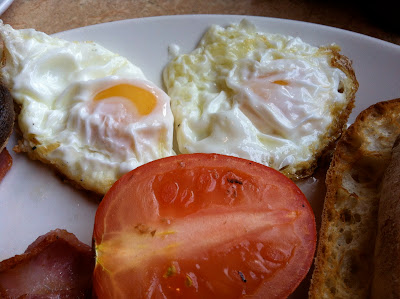 The fried eggs were well cooked underneath but the tomato was screaming out for more heat.

I had recently noticed Bella Italia were now serving breakfasts and having tried pretty much every other place in the city decided to pop along and see what it was like. I often find restaurant chains very hit or miss so wasn't sure what to expect, quality and service can vary hugely between different branches depending on the staff working there. Oh well one way to find out...

Upon entering - The dining area is huge although when I arrived there was just one other couple in there so I was able to chose to sit anywhere I wanted. There was a breakfast menu on each table along with salt, sugar and a card asking for your feedback with a chance to win £250, I wondered if I was in with a chance! Drinks, cutlery, sauces and pepper are brought to your table later before the food arrives. So a full waitress service and you pay your bill at the end. I didn't find it particularly inviting and it felt a bit like we were eating in a restaurant that was actually closed as it was so empty. 5/10

Service - The person serving us was perfectly friendly and polite but a couple of things did niggle us slightly. The toasted ciabatta arrived looking really dry and looked in desperate need of some butter, we asked if we could have some butter but was told there was none on the premises (in a restaurant, really??) We were however offered some garlic butter but declined knowing this was not a flavour we fancied with our breakfast.  The other thing I noticed was that our food was sat under the hot lamps and spotted by 2 members of staff but still left until somebody finally decided to bring it over to us, certainly frustrating to watch. The waitress didn't ask how the food was at the end, I'm guessing she could tell we were not too impressed with it! Also although it is very kind of the waitress to put pepper on my breakfast I would much rather do it myself. 5/10

Presentation - My first thought was that some butter was desperately needed for the very dry looking toasted ciabatta. Then I spotted how undercooked the tomato looked and overcooked the bottom of the fried eggs were. Everything was placed on the plate in a reasonable fashion but it was not about to win any awards for great presentation. 6/10

The food - Starting on a positive note the bacon looked and tasted great and it wasn't alone, the mushroom was really good too. The eggs tasted ok but were very crispy underneath, the yolks were runny at least giving some much needed moisture to the bone dry toasted ciabatta. The potato wedges had no crispiness outside and were pretty solid inside, they certainly needed cooking for longer as did the barely cooked tomato. The sausage was a bit of a surprise, looking ok (if a little overcooked) outside but lacking any quality inside. By far the driest breakfast I have ever eaten and quite disappointing that some things were not cooked for long enough. 5/10

Value for money - £5.25 seemed quite cheap but the breakfast wasn't great and add £2.25 for a coffee (you will need a drink with this breakfast!) making it £7.50 and suddenly you're wondering why you didn't go elsewhere and spend your money more wisely. 5/10

Veggie option - Yes, but it is basically the same breakfast without the meat for 30p less.

Overall - An English breakfast being served in an Italian themed restaurant chain but getting confused along the way and ending up way too dry. Bella Italia's effort to cash in on the breakfast trade didn't really do it for me, especially when there are so many really good independent cafe's serving excellent breakfasts in the city centre. 5/10