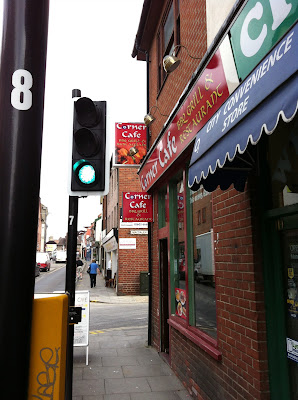 Cafe Selin had turned into Corner Cafe so I decided to pop in and try it out. 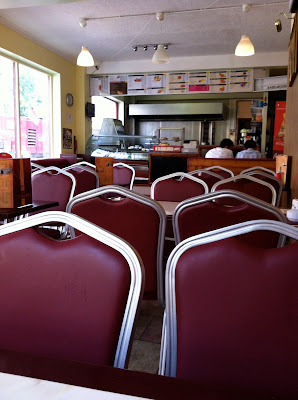 Inside remained pretty much the same. 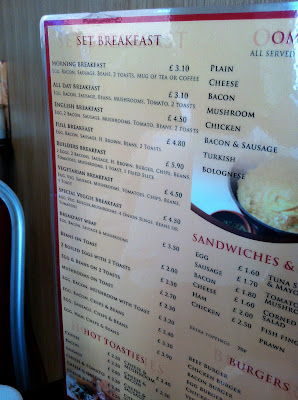 The menu looked to be quite similar too. 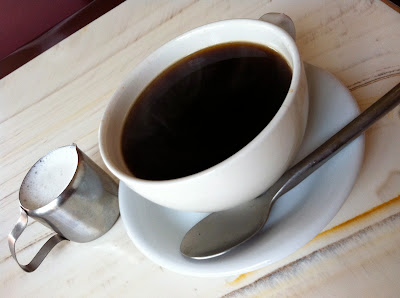 The coffee came with the morning breakfast which cost £3.10 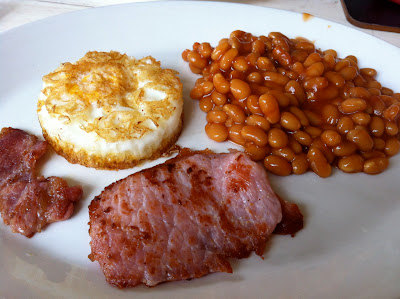 I couldn't believe my eyes when the plate was put in front of me! 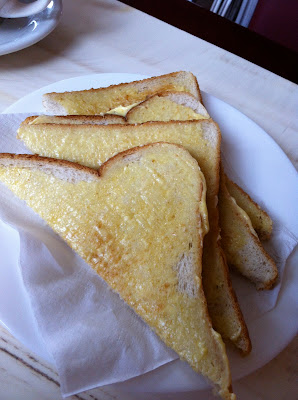 The toast came with the breakfast and appeared to be the most sane part of it. 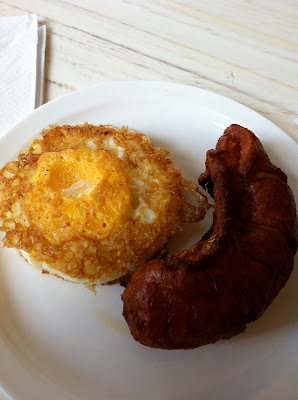 I had originally planned to pop into Greggs in Anglia Square for a bacon roll and a coffee but when I arrived I realised I was too late and they stopped serving bacon rolls at 11am. I started heading home wondering what to eat instead and suddenly noticed that Cafe Selin (review here) on Magdalen Street was now Corner Cafe. It looked the same inside and I wasn't sure whether the same people were running it still or not. They were serving breakfast all day so I decided to pop in to see if the food had changed or not...

Upon entering - Inside looked exactly the same as before, the only noticeable difference was the rebranded menu, most of the items on that were the same as before so perhaps the owners had simply decided to change the name of the cafe. There are lots of places to sit and each table has a menu and selection of sauces, there is a large menu above the counter and one in the window too. Place your order and pay at the counter and everything is bought over when it is ready. 7/10

Service - The lady taking my order seemed friendly and cheerful when taking my order. First the coffee arrived and after a further 10 minutes or so I spotted her bringing the breakfast, toast and cutlery over. When the breakfast was put in front of me I didn't know whether to laugh or cry, it was a very sorry looking sight indeed and it looked like something was missing. She apologised  profusely telling me that the sausage had exploded and another was on its way. About 5 minutes later a very strange looking sausage arrived on a plate with an extra egg. She apologised further telling me she had cooked me an extra egg and offered me more toast on the house. The whole thing felt like a bit of a shambles really and items arriving late is never a good thing.  4/10

Presentation - The main plate had a dollop of beans and a perfectly round and well over cooked fried egg that looked like some kind of caramalised desert, the bacon had broken into 2 pieces and was well spread out on the plate to try and hide the fact that there was so little on it. The 2nd side plate that arrived later had an even more over cooked fried egg that sat next to a quite alien looking exploded hot dog sausage that had been cooked to replace the first exploding sausage. The toast on plate number 3 at least looked reasonable. 3/10

The food - The barely recognisable hot dog sausage had been cooked for too long and although reasonable in the middle the outside was incredibly tough and too crispy. The fried eggs were as tough as old boots, well overcooked and it was like chewing on an old dry sponge. The bacon was fairly nice and the toast was average. 3/10

Value for money - £3.10 is a great price for a basic cooked breakfast with toast and a hot drink but it was far from enjoyable and totally overcooked leaving me wishing I hadn't bothered. 3/10

Veggie option - Yes, 2 veggie breakfasts are available on the menu.

Overall -  A nice enough looking cafe still but this was nothing like my 1st visit when it was Cafe Selin, the food was overcooked and unenjoyable to eat. I was the only customer there and I had ordered the most basic breakfast on the menu so why it was such a nightmare for them to cook for me is a mystery. Such a shame it has gone downhill and not a place I would recommend for breakfast. I just hope they can turn it round and get things back on track again. 4/10