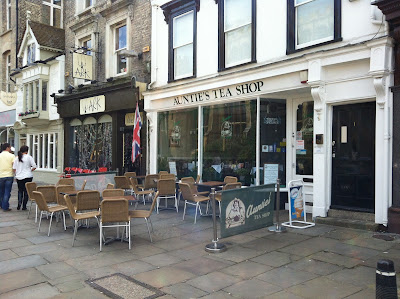 Auntie's Tea Shop if close to the Marketplace on St Mary's Passage. 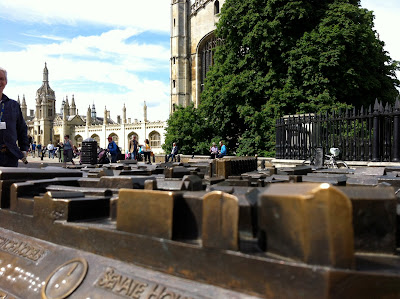 Kings College is very close by too. 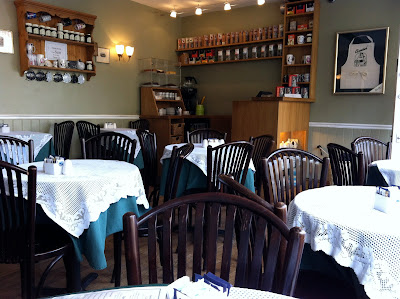 Inside feels very traditional with its lace tables cloths and homemade cakes. 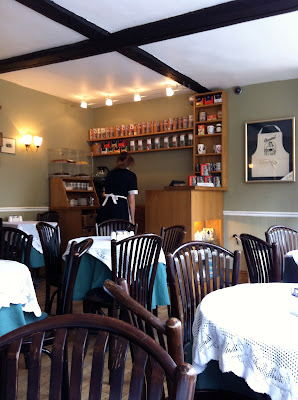 The waitresses are dressed in traditional black uniform with white pinnies. 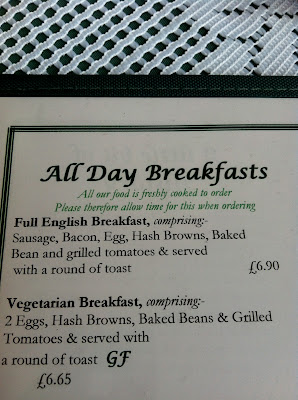 If you order a cooked breakfast before 11.30am a free hot drink is included. 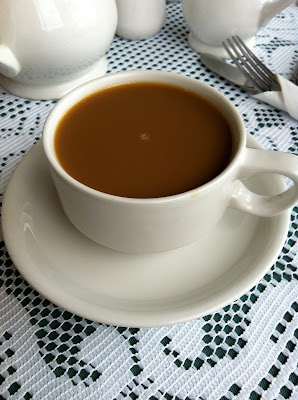 The coffee is ok but nothing to write home about. 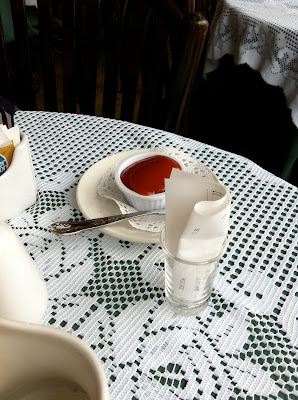 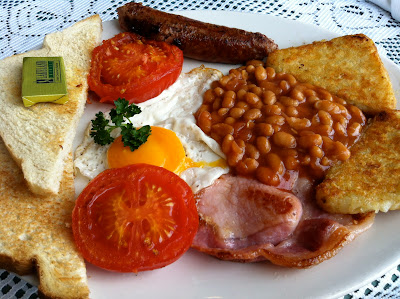 I enjoyed the breakfast with its vibrant colours and tidy presentation. 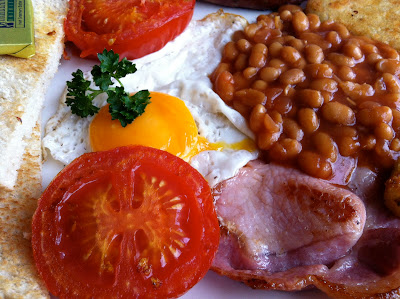 The yolk may have sprung a leak but it tasted great.

4 weeks after my last visit I was back in Cambridge again to see some live music at The Man On The Moon. I always have a good night out in Cambridge and this time was no exception and I had the hangover the following morning to prove it! The previous day we had spotted Auntie's Tea Shop whilst shopping and decided it would be where we go for breakfast the following morning...

Upon entering - Inside it is light and very traditional with a counter in the corner, there are plenty of tables outside too. There is a full waitress service so once you are seated everything is bought to the table including the menu. 7/10

Service - The waitresses were all quite young and dressed in traditional black uniform with a white pinnie. Initially it felt like going back in time but overhearing the waitresses discuss where they had been out the night before and how hungover they were feeling soon bought me back to 2012 again! I was hungover myself though so could fully understand how they were feeling but it did take the edge off the traditional feel the tea shop is probably trying to portray. The service was friendly and fairly efficient, I did however have to remind the waitress that they had forgotten to bring us our orange juice we had ordered earlier. When the food arrived there was not really enough butter for the toast but they were more than happy to bring more straight over to us. 10% is added onto the bill at the end for service and to be honest I would have left a tip anyway but I am less keen on this method as I prefer to have the option depending on how good the service actually is. 6/10

Presentation - I liked how the items were neatly placed on the plate and how the hash browns were containing the puddle of beans. There was a slight leak from the egg yolk but not enough to cause a problem and the sprig of parsley was a nice touch. It was a great mix of bright colours and I couldn't wait to tuck in. 8/10

The food - The sausage had quite a rich flavour and good texture, the bacon was cooked nicely and tasted great. The fried egg had a rich yellow yolk and went nicely on top of the buttered toast. The hash browns were cooked nicely with a soft textured centre and crispy on the outside. Rich and stodgy baked beans and flavoursome tomatoes finished off this breakfast that was a pleasure to eat. 8/10

Value for money - Considering its prime and central location £6.90 (£7.59 with service charge) seemed like a reasonable price for what was an enjoyable breakfast. Because we were there before 11.30am the hot drinks were free making it a better deal. 7/10

Veggie option - Yes, but quite a lazy one. 2 eggs, hash browns, baked beans and grilled tomatoes served with a round of toast for £6.65. This seems a bit over priced considering the meat breakfast costs just 25p extra and includes much more. Veggie sausages would surely make a welcome addition to the veggie breakfast and make it seem better value for money.

Overall - Not quite as polished and slick as I was first expecting but enjoyable all the same. The breakfast was a pleasure to eat and did wonders for my hangover so quite a result really. If you are looking for somewhere in the centre of Cambridge to eat breakfast then it is well worth a look and a far better option than "Agora at the Copper Kettle" a few minutes away. 7/10