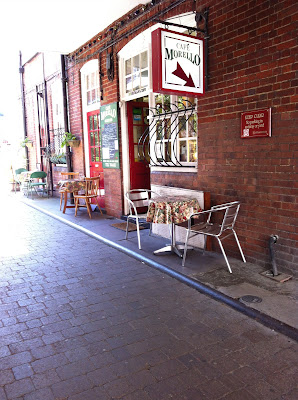 Cafe Morello is located opposite Debenhams in Orford Yard. If you prefer to sit outside there are a plenty of tables to choose from. 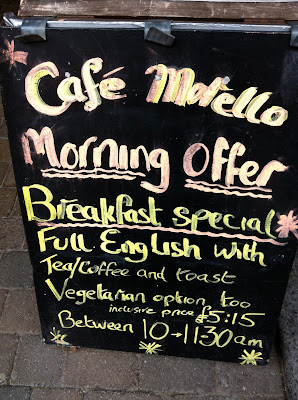 It looked like a great offer so I decided to pop in and try it. 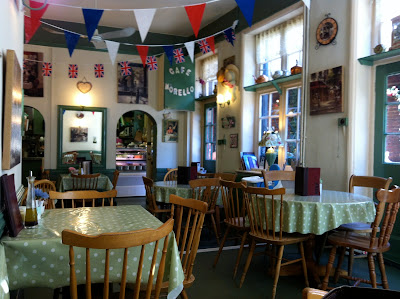 The cafe looked fantastic inside, a nice blend of traditional and kitsch. 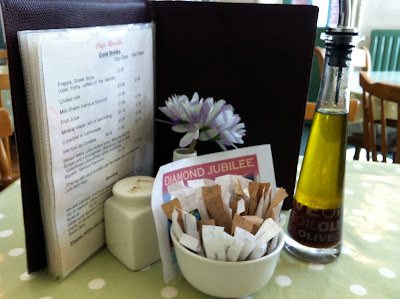 The full english isn't mentioned inside the menu so unless you spot it on your way in you could easily miss it. 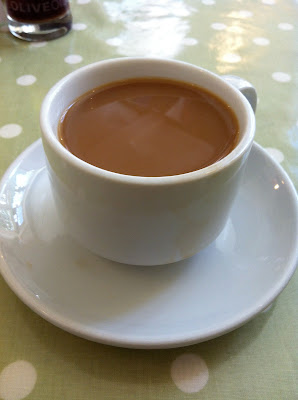 A hot drink comes with the breakfast, I went for coffee. 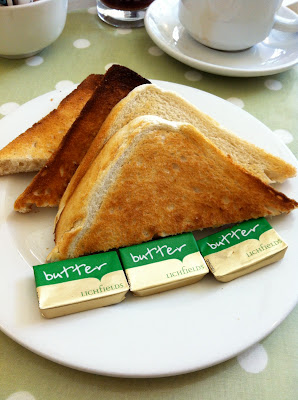 The toast also comes with the breakfast, you can choose from 2 types of bread and it was nice to have plenty of butter. 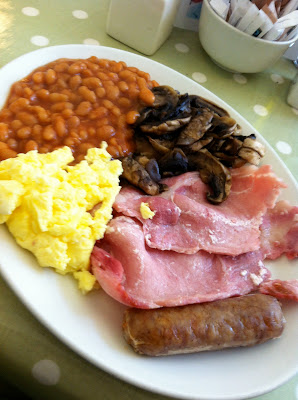 Everything was going so well and then the breakfast arrived, it was piping hot but just looked so bland and appeared to have been microwaved. 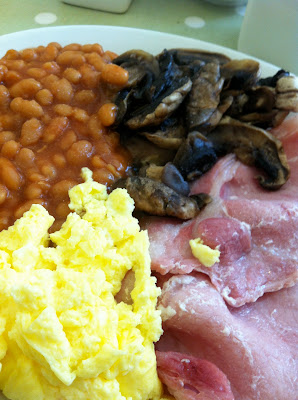 The bacon was perfectly hot enough but had no crispiness whatsoever.

Just when I thought I had been everywhere in Norwich City Centre for breakfast the sign outside Cafe Morello stopped me in my tracks. I had always passed the Cafe and thought how nice it looked in the quaint alleyway, I was really looking forward to popping in there for breakfast and decided it would be the next place to visit. A week passed by and the sun was shining as I headed into the city, I could feel myself walking quicker as I approached the cafe, expectations were high as I walked through the door...

Upon entering - There is a counter to your right as you enter where you place your order, cutlery can be found to your left. Place your order and pay at the counter, take some cutlery, choose a table and the food is bought over when it is ready. The light and airy interior is fantastic with a traditional and kitsch feel to it, bunting hangs from the ceiling and spotty table cloths are found on each table. There is plenty to look at with lots of decorative items on the window ledges and pictures on the walls. The windows look out on to the delightful yard outside where more tables can be found. 9/10

Service - As soon as I entered I was greeted with a smile by the friendly lady at the counter, she told me about the breakfast special offer and took my order. I was given the option of tea or coffee and what type of bread I wanted for the toast, I was also asked if I wanted any sauce to which I replied tomato ketchup. I was told where the cutlery was and took my coffee over to a table inside, I thought about sitting outside in the sunshine but needed to get an interior shot so decided against the idea. The toast arrived first and shortly after that the breakfast arrived, the ketchup never made it to the table though. 7/10

Presentation - I was expecting something as stunning as the beautiful cafe to arrive but as soon as the plate was placed in front of me I was visually disappointed. My first thought was that everything looked microwaved, the meat lacked any sign of having been in a frying pan or on a griddle. The food was placed on the plate nicely enough but it just didn't excite me and looked very bland. 4/10

The food - The sausage was over cooked, a bit chewy and had no appealing colour to it at all. The bacon was ok but again didn't look very appealing and was in much need of being crisped up a bit. The scrambled egg was ok but a bit bland and the mushrooms and beans were average. The toast and butter was possibly the best part of the breakfast. 4/10

Value for money - The Full English came with toast & butter and a tea or coffee for £5.15, beans were available as an extra (about 60p I think) so a fair enough price. I can't say I particularly enjoyed the cooked breakfast though so I didn't leave feeling like it was money particularly well spent. 4/10

Overall - The cafe is beautiful and the staff here are fantastic but for me the breakfast disappointed and this was purely down to the way it was cooked and I suspect they are not equipped to cook it any other way. I imagine this is a great place to come for lunch or coffee and a cake (the cakes on the counter looked delicious!!) which Im sure is there strong point. 5.5/10