The location is perfect, directly opposite Kings College on Kings Parade. 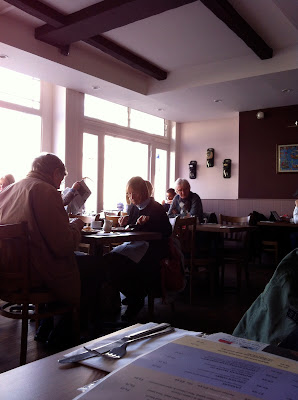 Inside it is modern, light and spacious. 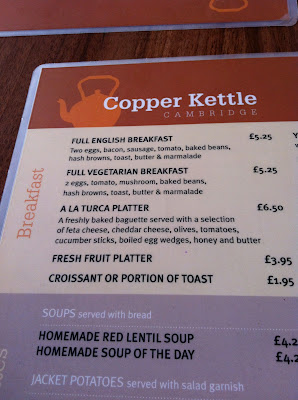 Since my first visit in June 2011 the menu had changed, the economy sausage had been  replaced by a local Cambridge sausage and hash browns were now part of the breakfast. 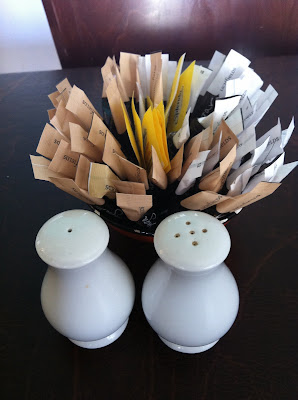 A good selection of sugar. 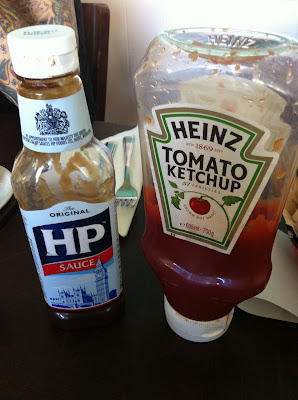 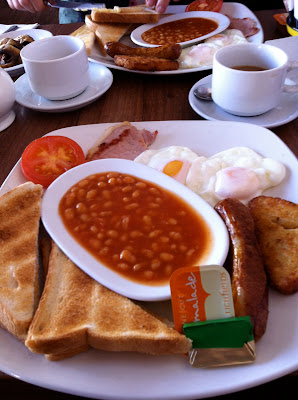 This is the slightly revamped breakfast and it tasted good. 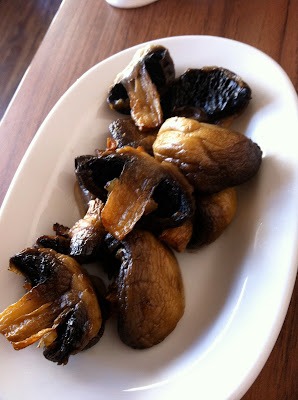 The deep fried mushrooms were saturated in oil and not so good though.

Back in June 2011 I visited Agora at the copper kettle for the first time. I was not too impressed with the economy sausages back then and felt it was letting down an otherwise good breakfast. There was quite a number of comments left on the blog and one comment that caught my eye was left by a local Cambridge student, it said "Fry up inspector! I have news for you. I am a student at Cambridge and recently visited the Copper Kettle for breakfast. The place has been refurbished AND the breakfast has changed! Gone are the old sausages...which have been replaced by a 'Cambridge sausage' from a local butchers ( i have been told)...they now also give hash browns, and 2 eggs! The sausage was very nice i must say! You should re-visit...and maybe do a 2012 update for the website (which Im a big fan of by the way!)"

I was back in Cambridge again and knew I needed to return to try the new breakfast and update my write-up if things had changed. second time round here is what happened.

Upon entering - Location wise this place is perfect, sited directly opposite Kings College. I realised straight away that this place was here mainly for the tourists. There are plenty of tables in this light and airy establishment, everything is nice and clean and there is full waitress service. 7/10

Service - Back in 2011 I said "Friendly and efficient waitress service though we did have to wait a fairly long time for the food to arrive. 7/10" On my second visit though the service was very odd indeed, it was almost as if they didn't like the look of us or want us there and was far from friendly. It started off ok with the waiter taking our order and eventually the food arrived. My girlfriend asked politely for some more butter for her toast but was ignored so asked again. He then giving her a bit of a frown said abruptly "yes, yes I am getting you more butter" and returned with the butter looking most annoyed. I have no idea why he responded like that and it was incredibly rude. When my girlfriend later went to pay she mentioned the mushrooms were not very nice and the person taking her card payment again looking most annoyed ripped the receipt from the card machine and decided to not charge for the mushrooms but in a very brash and annoyed manner without saying anything. My girlfriend was about to mention to the lady that she was very rude but she quickly turned to another customer and walked away, the only time we got a smile from any of the staff was as we were leaving and I think they were just glad to see the back of us! On my search for fry up perfection service is as important as the food and when it is not good it ruins the whole experience. Such a shame as it was good the first time round and after this experience I will never return here again. 1/10

Presentation - Im not a fan of square plates and the beans being served in a separate bowl is not for me but it looked nice when it arrived, upon closer inspection there was a fair bit of excess oil on the plate though. 7/10

The food - The sausage was a huge improvement since last time and tasted delicious, it seemed a shame to deep fry such a good sausage though! The bacon was ok and went nicely between 2 slices of toast, the toast was really nice but just one small packet of butter between 2 slices of toast was not really enough. The best thing about this breakfast was without a doubt the fantastic fried eggs. The hash brown was nicely crispy and the beans  and tomato were rather nice. The mushrooms were pretty grim though deep fried and saturated with oil. 7/10

Value for money - £5.25 and an extra £1 if you want mushrooms. We were let of the £1 for the mushrooms as we pointed out they were not nice. The food is well worth the money but when the staff were rude it didn't really feel like money wisely spent. 3/10

Veggie option - Yes, the same cost as the meat breakfast and the meat is substituted with mushrooms. A veggie sausage would have been a nice touch.

Overall - I was looking forward to revisiting Agora at the copper kettle and hoping to increase the overall score as last time everything was good but the sausages were letting the breakfast down. They have certainly improved the sausage situation, just a shame it is deep fried though. What sadly let the place down this this time though was the rude staff, when a business relies on customers surely you can't afford to be rude to them? Agora at the copper kettle most likely has regular customers but its prime location opposite Kings College puts it in a tourist hot spot so I guess many tourists eat there too just once on their trip to Cambridge. We were polite and possibly seen as tourists but there is no need for rudeness and for me it guarantees I will not return again. 5/10
Posted by Fry Up Inspector at 16:05