Available from most supermarkets 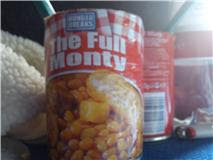 It might seem like a good idea at the time but you will end up wishing you never bothered! 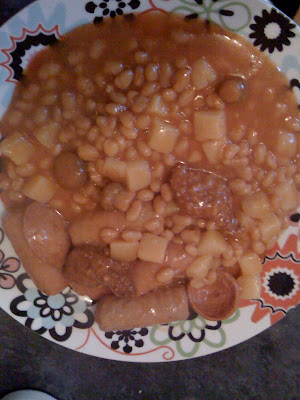 Yep, you will think somebody has puked onto your plate!

Me and my wife were shopping for beer as we were off to "Boomtown Fair" (a music festival in Buckingham) for the weekend. We normally either bring a BBQ with us or buy food off the stalls when we get there. We decided against the idea of taking a BBQ this time and kept an eye out for anything instant to eat in the mornings. We noticed Hunger Breaks full monty in a tin for £1.24, thinking they might be ok we grabbed 4 tins.

Waking up on the Saturday morning in the back of the van at Boomtown we suddenly remembered the full monty's in a tin. I think at this point the reality of how rank they were going to be had dawned upon us, what the hell were we thinking when we bought them! It was pissing down with rain outside and we were far too hungover to get dressed and go buy some proper food so we opened a can..

The food - Imagine what it would be like to eat cat food then bite into the sausage, bacon & beef cutlet, yuk!! Very bland mushrooms, potatoes & beans. 2/10

Value for money - You will not be impressed, £1.24 spent on anything other than this is always gonna be a better option. It's edible but so is paper, it will fill you up if you can stomach it but don't do it to yourself! 2/10

Overall - Having tried it cold out of the tin I decided to heat the other tins up when I got home again thinking they must be nicer hot. They are just as grim when heated up so do yourself a favour and avoid like the plague. Why the company making these didn't at testing stage realise they were rank and go back to the drawing board is beyond me! 2/10
Posted by Fry Up Inspector at 14:06